The summary of the sixth day of Russian invasion to Ukraine.

The situation is becoming critical in the south. Russian Forces entered Kherson and encircled Mariupol. The situation on the other fronts remains rather stable. 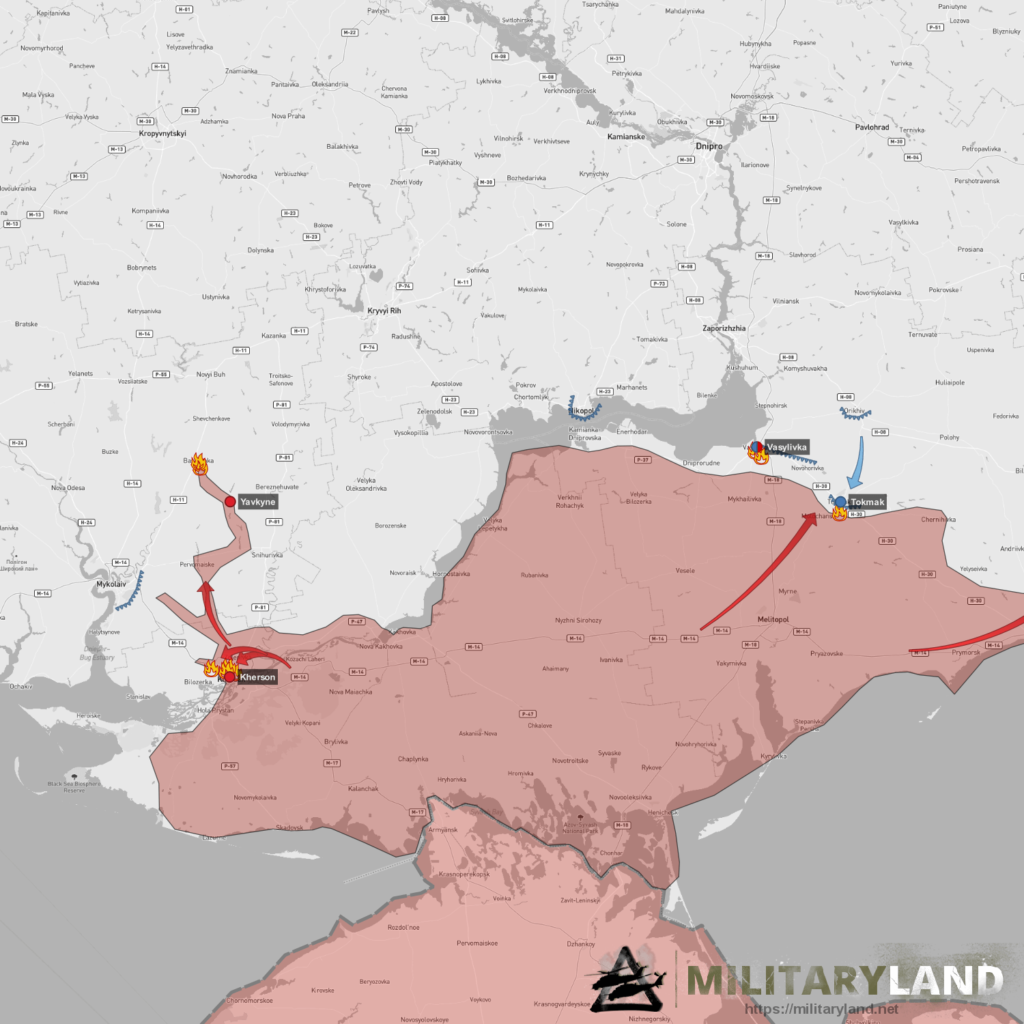 Russian troops entered Kherson and met only little resistance. The city was guarded by local Territorial Defense Unit and Ukrainian Army most likely withdrew from the town in the morning. Russian troops reached the train station inside the city and de-facto gained control of Kherson. We are still waiting on official statement of Ukrainian forces to confirm it.

Russian forces spearheaded north, captured Yavkyne and reached Bashtanka. Photos show a few damaged/abandoned trucks and BTR-80 in the town, which might indicate a rear element. The spearheading force most likely continues north towards Novyi Buh or trying to encircle Mykolaiv.

Tokmak saw heavy fighting during the day. In the afternoon, Ukrainian Army announced they drove out the enemy from the town.

Ukrainian forces also blew up a bridge in Vasylivka. 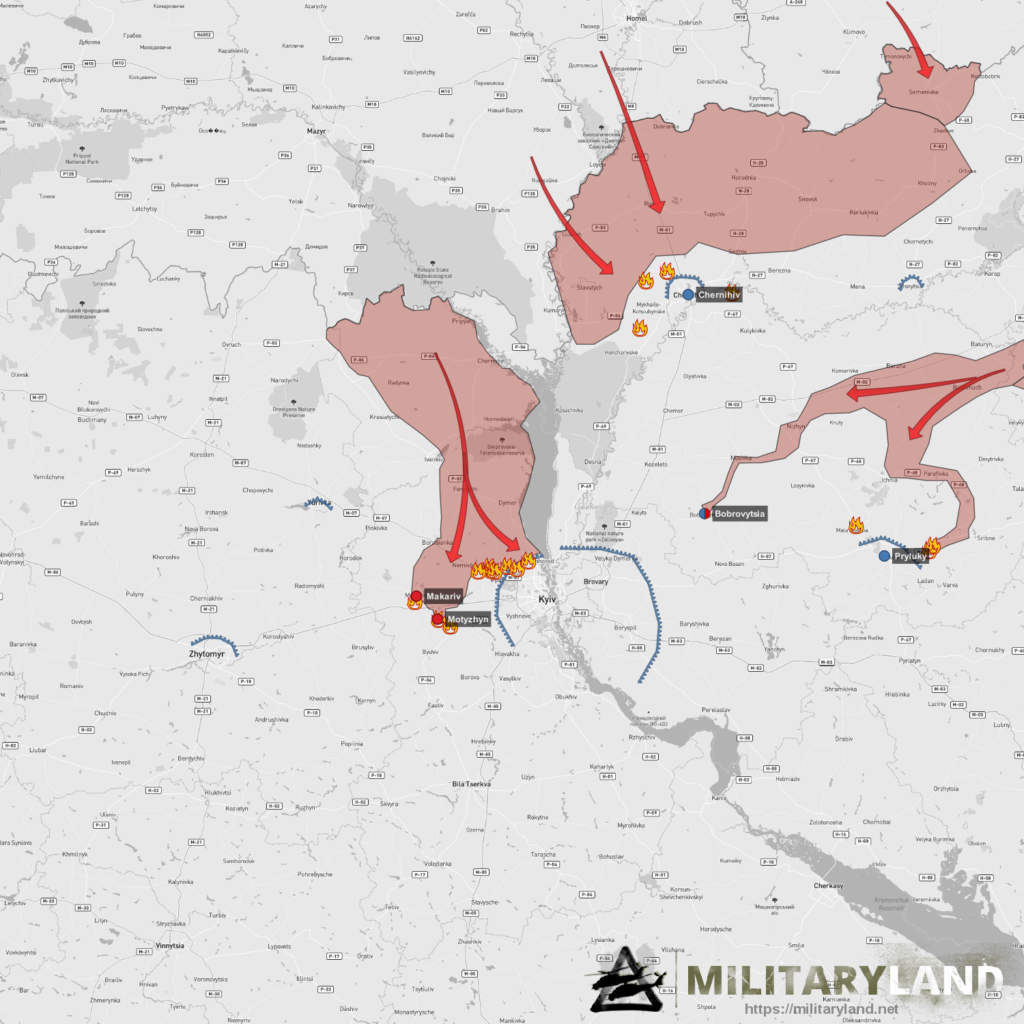 Russian military column was destroyed in Borodianka today. Other than that, there hasn’t been reported any progress by either side. The large Russian convoy, consisting of hundreds of tanks, trucks and APCs is still on its way to Kyiv.

Ukrainian official announced the first Belarusian soldiers crossed the Ukrainian border and joined the fight alongside Russian forces. However, it didn’t change the situation around Chernihiv. Ukrainian troops continue to hold the town.

Russian spearheading element reach Bobrovytsia and is roughly 100 km from Kyiv. If Ukraine won’t counter-attack in the night and push enemy forces out of the area, the forces in Chernihiv might be encircled and Kyiv surrounded from two sides. We continue to see abandoned Russian vehicles in this are due to not enough fuel. 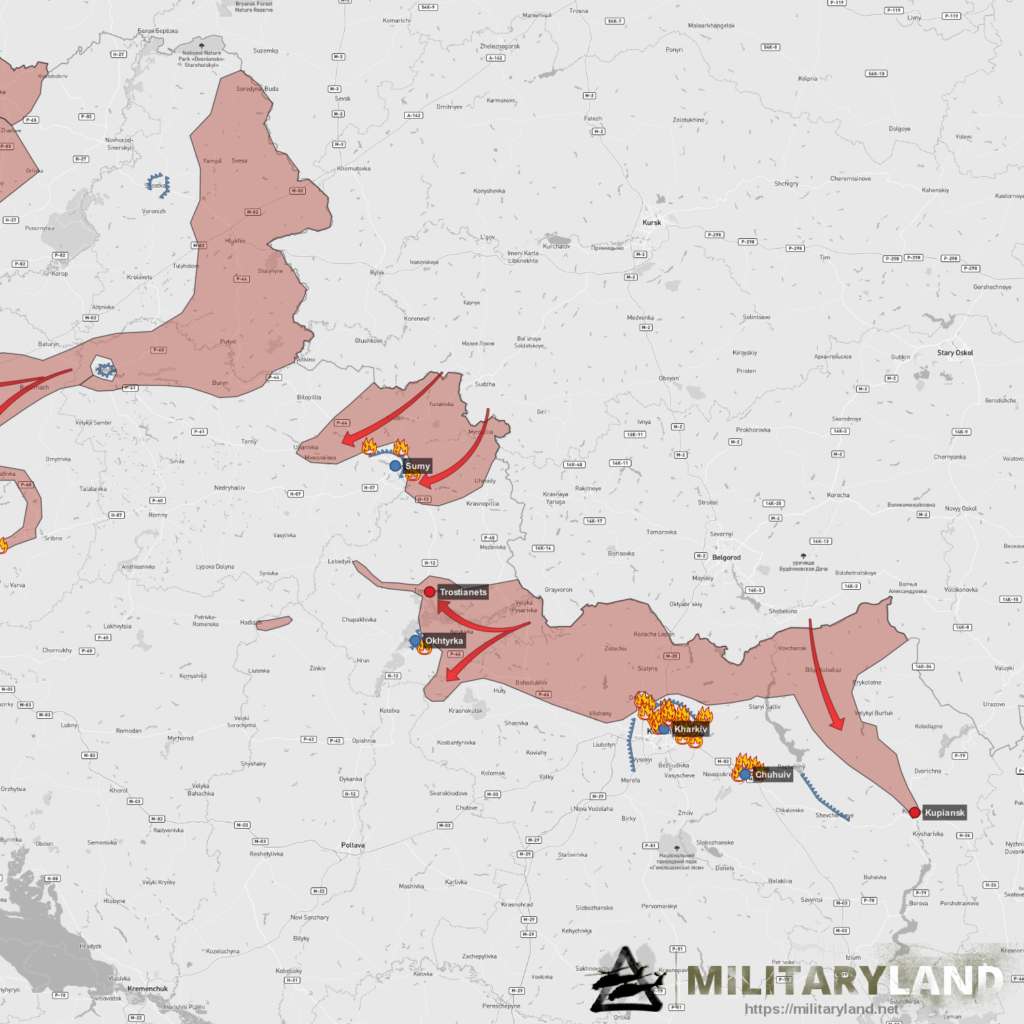 The city of Sumy was shelled during the day, but Russian forces didn’t gain any new ground. There are most likely some Russian elements moving around the region, but there is no footage.

Kharkiv was heavy shelled by all kinds of artillery during the day. No movement or new gains reported in this area.

In the evening, Russian forces heavy shelled the town of Chuhuiv near Kharkiv. There is an airfield and base of 92nd Mechanized Brigade. 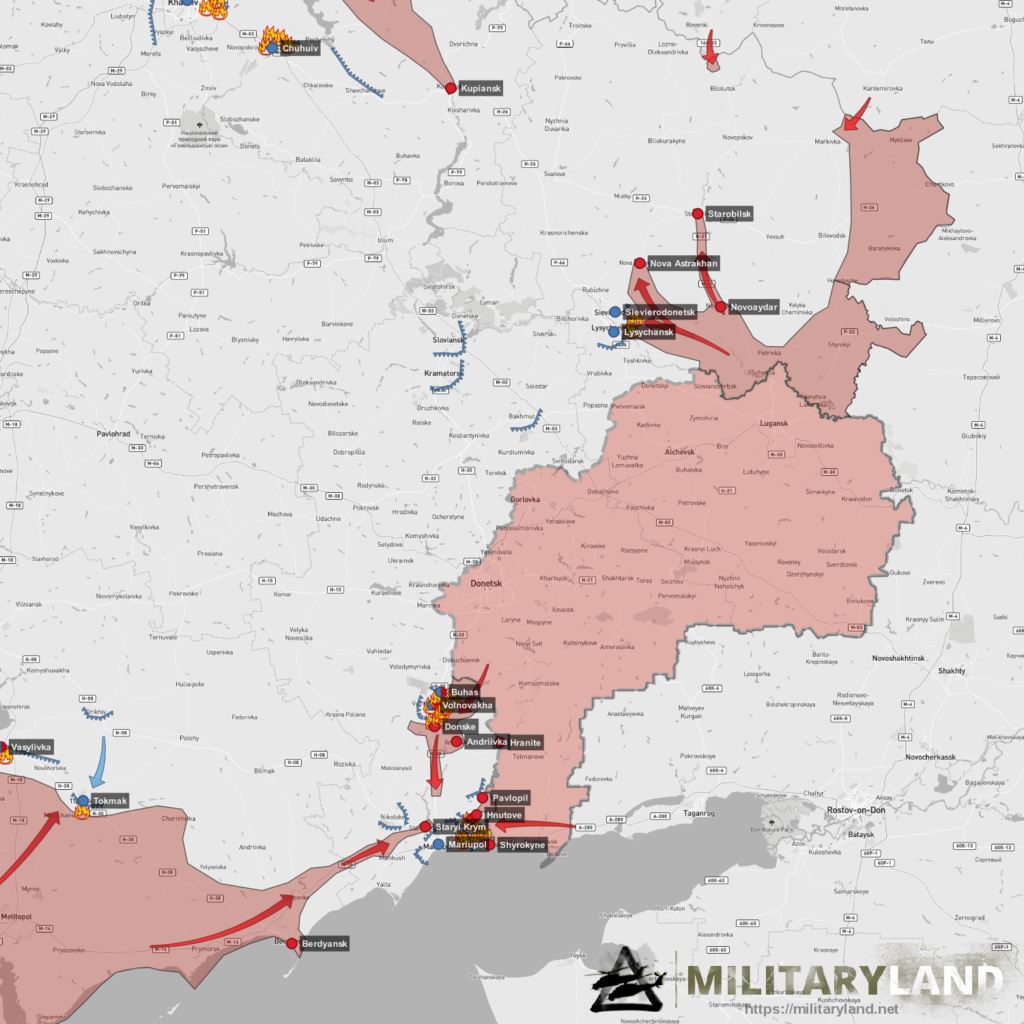 The enemy advanced north and captured Starobilsk. They met no resistance in the town. It’s currently unknown if there are still Ukrainian forces in Bilovodsk, but it’s fair to assume the town is empty.

Russian forces captured Shyrokyne and Staryi Krym near Mariupol. The Russian troops from the east pushed south, and they claim that they linked up with the Russian forces from the west. There’s been no footage of this so far, but we can say Mariupol has been encircled. 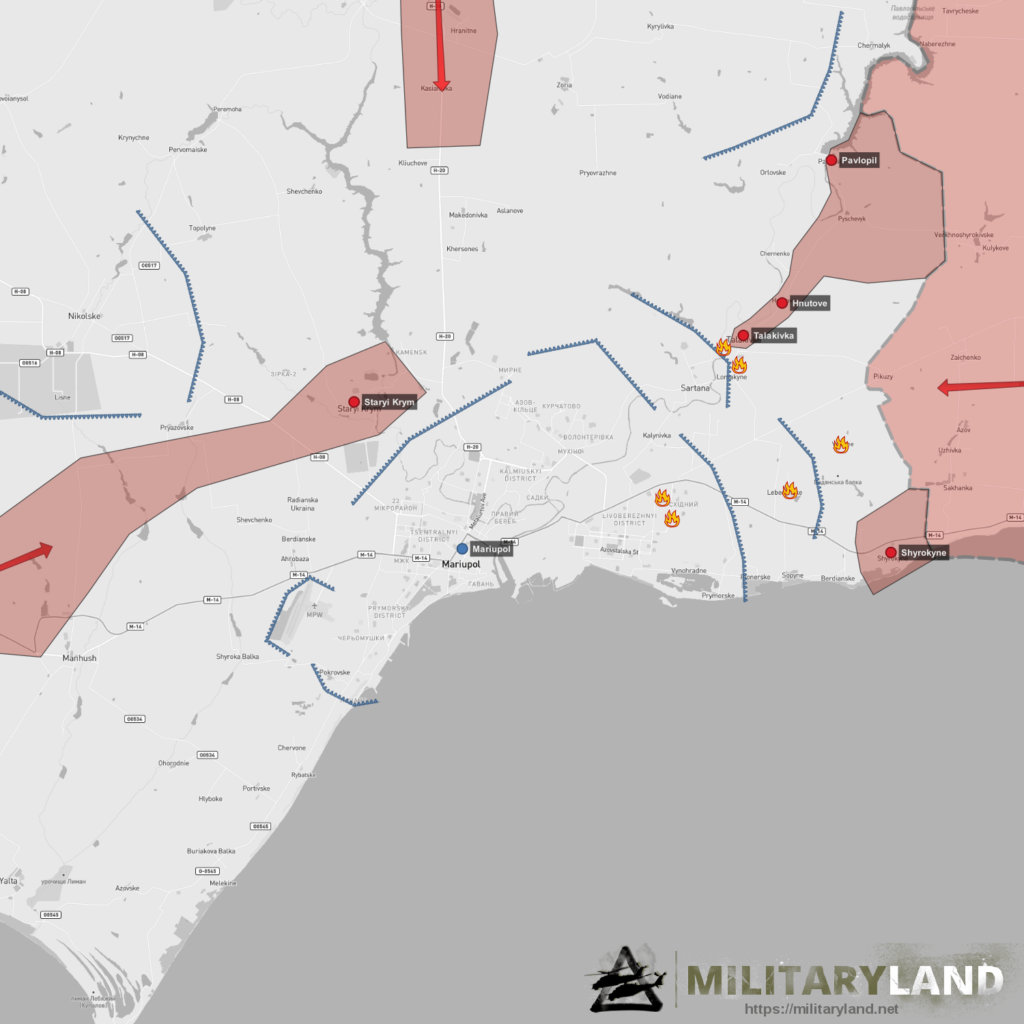 Can we get a legend on these maps? I want to make sure what I am looking at. I only have rudimentary knowledge.

Yes, I have the legend prepared for today’s maps.

Any involvement of the russian fleet ?

https://i.imgur.com/wbFjUuN.png The arrow points to Borodianka northwest of Ukraine. Yesterday, Ukraine intercept and destroyed a Russian column in this area. Still no media reports of the blown up bridges which are preventing the 40 mile long Russian column on the way to Kyiv. Please understand this – THIS COLUMN CANNOT PROGRESS TO KYIV PROPERLY UNTIL THE RUSSIANS REBUILD OR PONTOON THE BLOWN BRIDGES. Apparently this column is taking fire from Ukraine, so the Russians need… Read more »

Terrible. Simply terrible. The southern front has been a worry since day one, but with the breakthrough at Kherson and the combined battles in the east.. Not good news at all. I’m both curious and anxious to see how the Russians will exploit their successes on the southern front. It’s difficult to make predictions about their potential advances without accurate knowledge of their logistical capability and local air superiority. Regardless, this week seems to be… Read more »

Casualties are really hard to determine at this moment. Both sides claim killing hundreds, but there is no way how to verify it. Ukrainian community is very active in this, and we’ll have a list one day, but it’s too early.

Ah, I figured so, but thought it worth it to ask. Thank you again.

Both sides have around 1500 dead soldiers, and several hundred destroyed tanks, armored vehicles.