Russian forces have captured a dozen of settlements in the direction of Slovyansk. Ukrainian reinforcements and guns supplied by the west are being moved to eastern Ukraine in mass. Most noticeable are manpads, Ukrainian soldiers downed at least five air targets during the last two days, including Ka-52 attack helicopter. 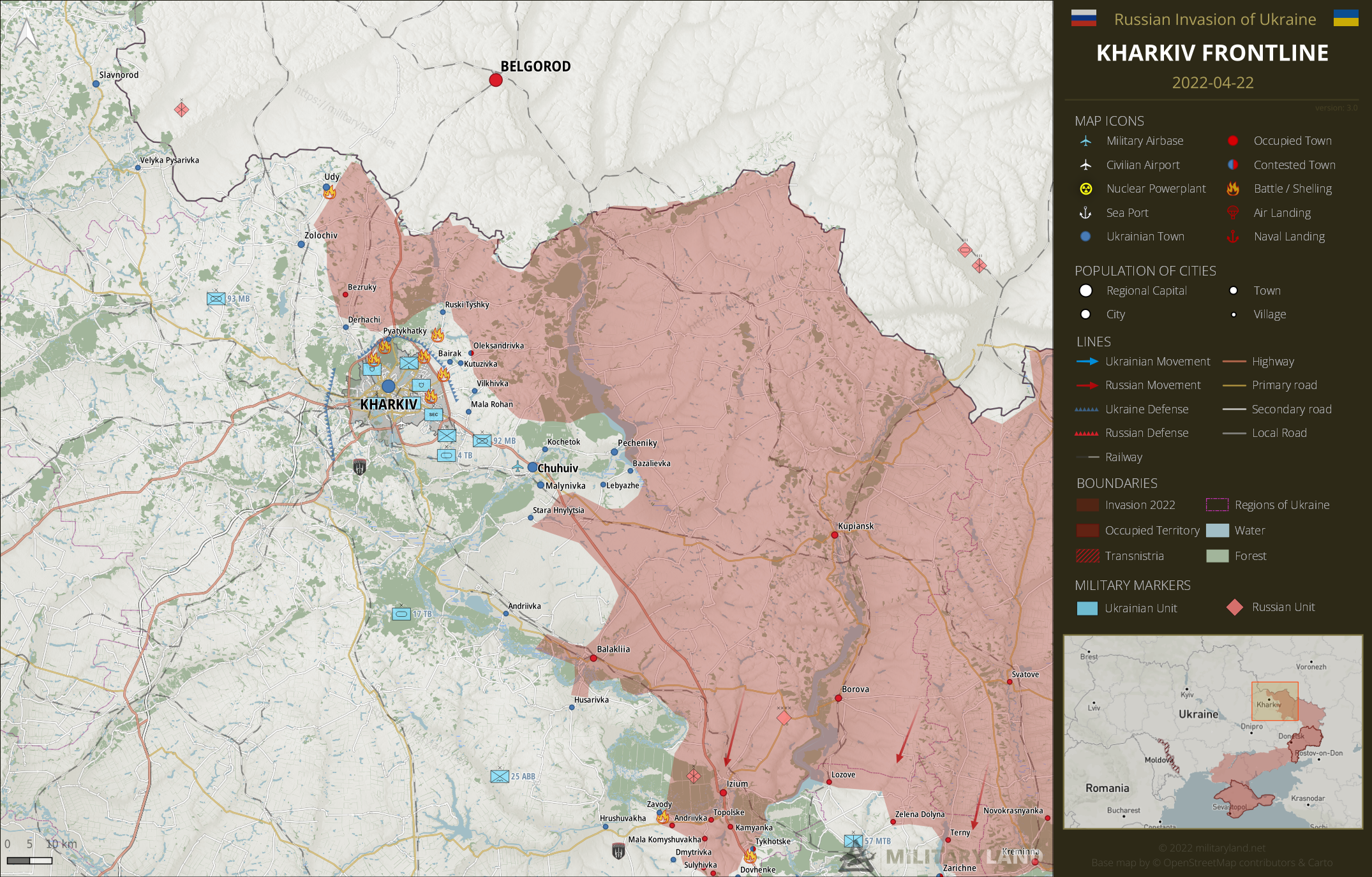 Russian army shelled Udy (north of Zolochiv), which indicates the town is under Ukrainian control. It seems that Ukrainian troops are slowly and quietly advancing alongside the Russian border in the north. 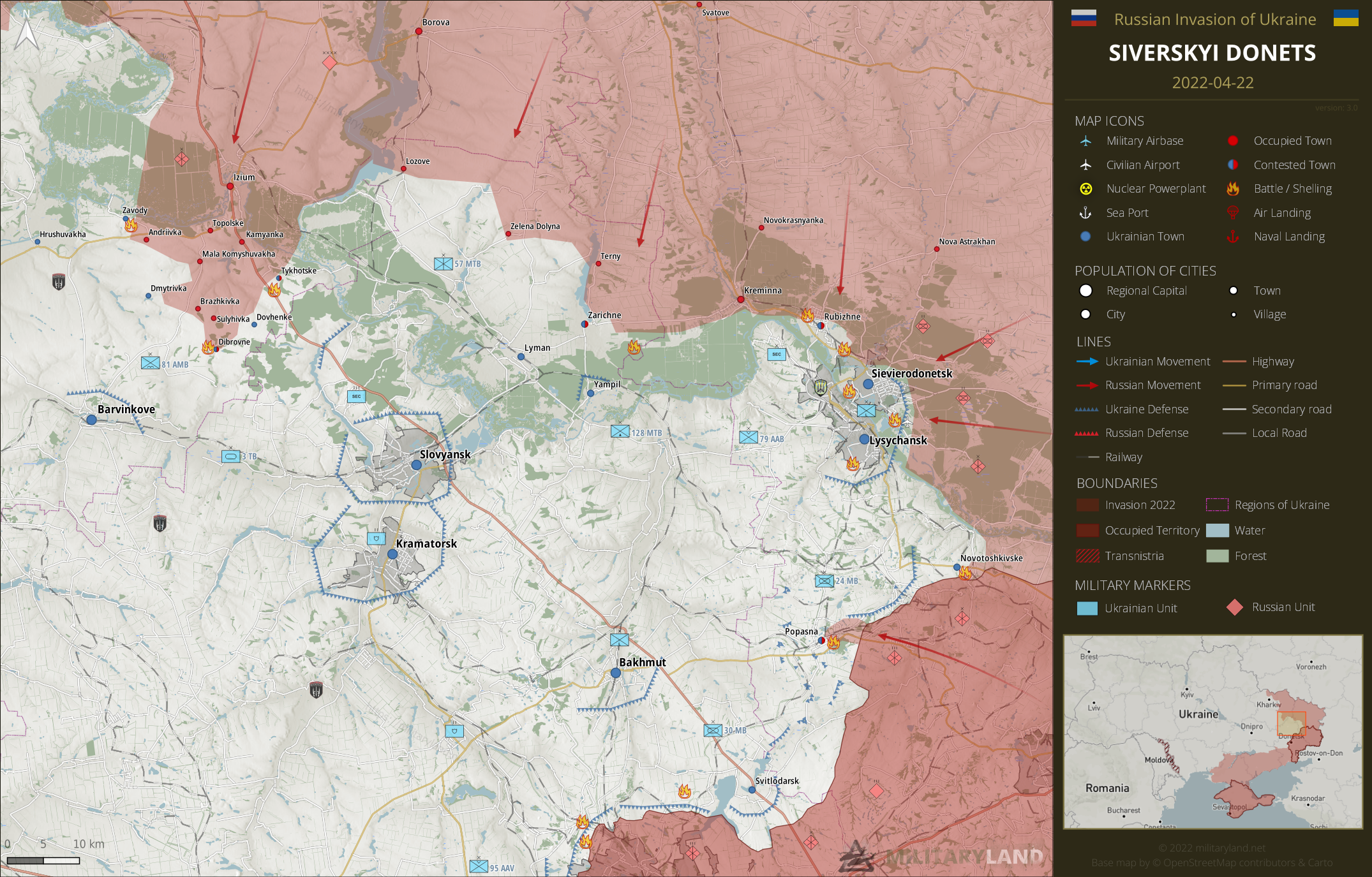 The enemy have advanced south of Borova and captured Lozove and Zelena Dolyna, securing the northern gap. Heavy fighting was reported from Zarichne, where Russian army is attacking from two sides – Terny and Kreminna. Ukrainian command is aware of the worsening situation in the area and prepares to withdraw its forces behind Siverskyi Donets river if needed.

The situation in Popasna is complicated, but Ukrainian soldiers are holding all key positions. Same for Novotoshkivske. 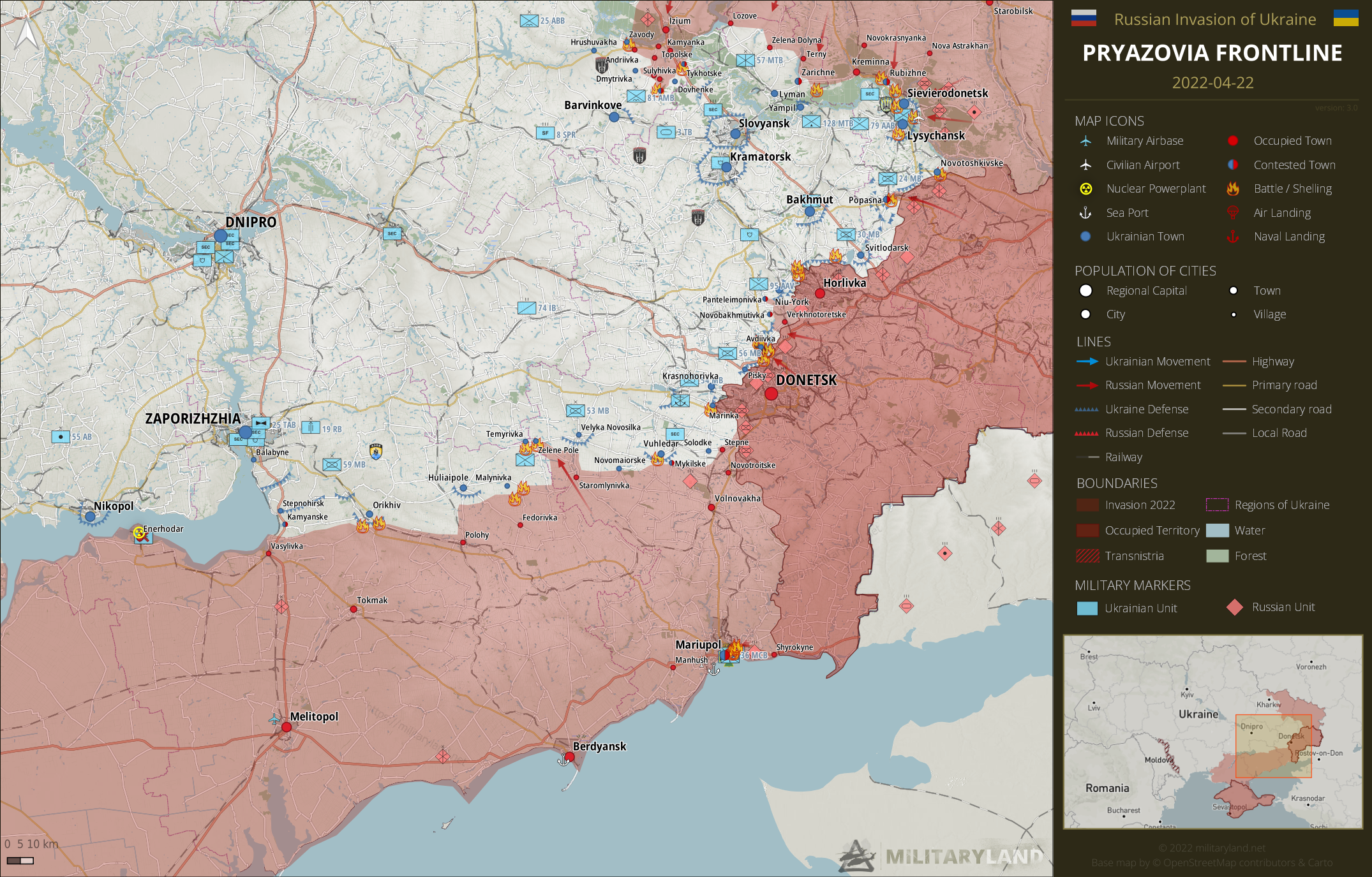 Russian troops attacked Ukrainian positions at Vuhledar, Marinka, Avdiivka and near Horlivka, without success. However, the enemy have advanced alongside the regional border of Zaporizhzhia and Donetsk Oblast and reached Zelene Pole.

Russian elements have reached Malynivka, but it remains unclear if Ukrainian forces are still in control of the village, or they withdrew to the north. 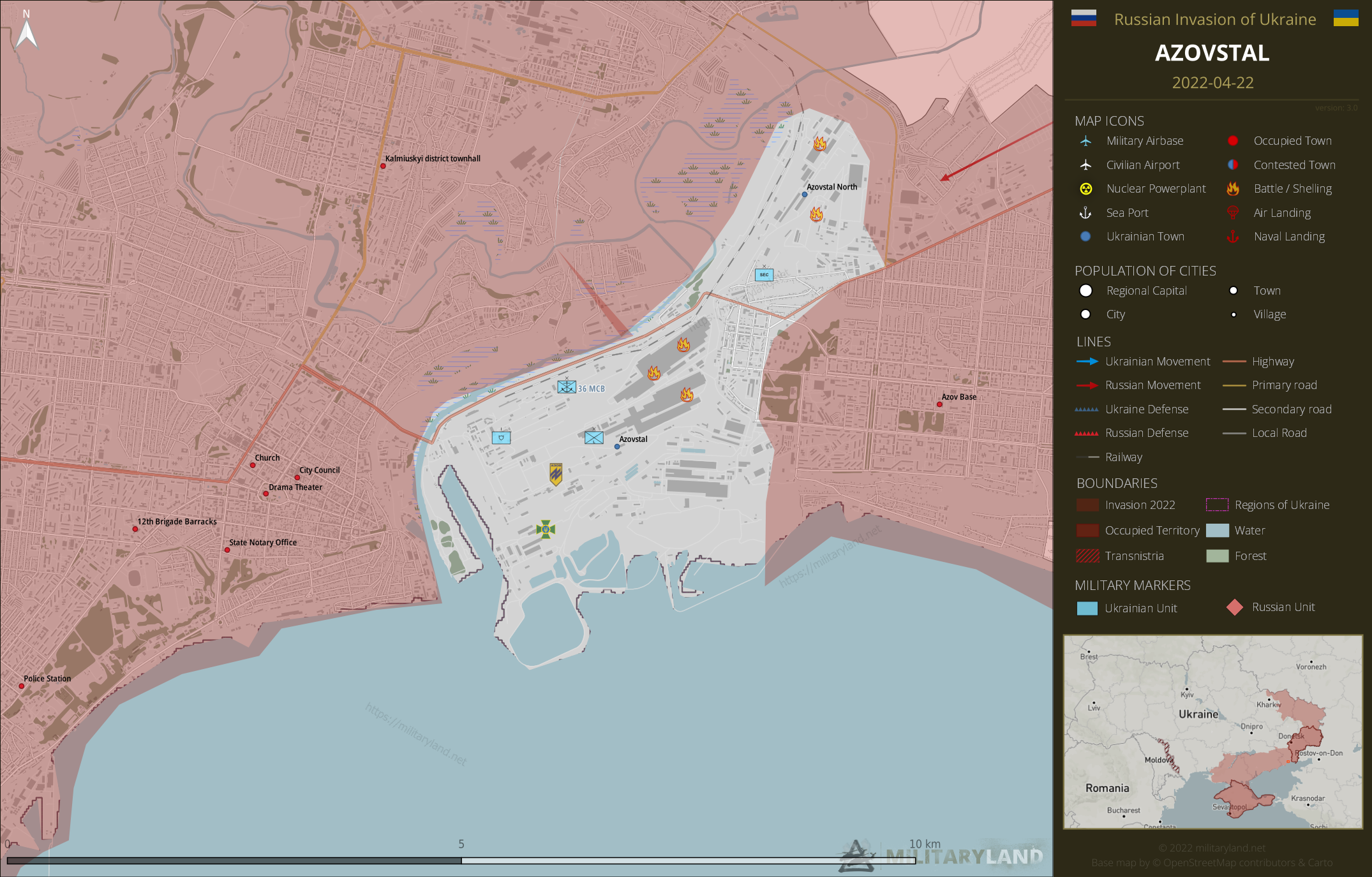 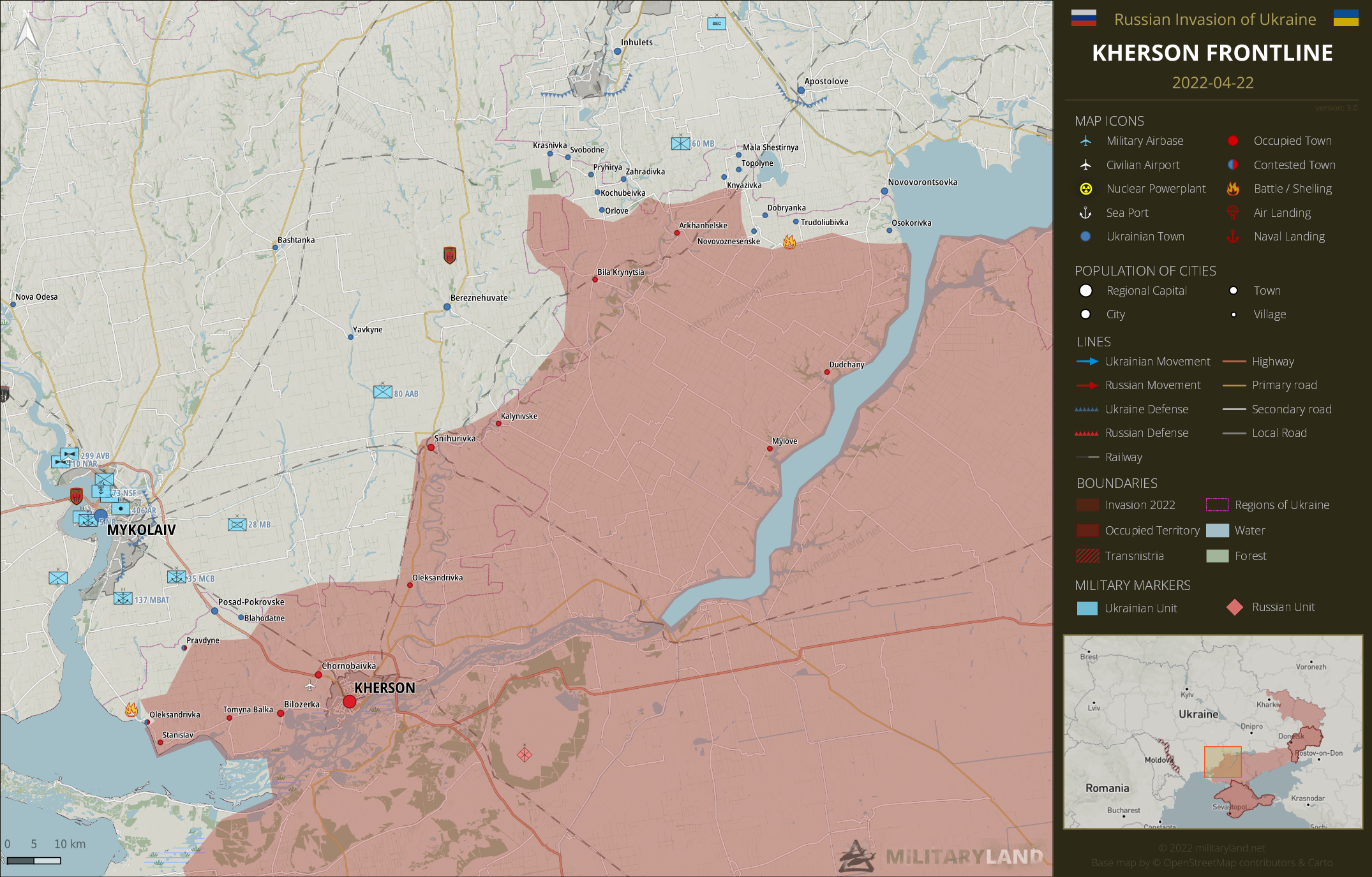 Russian elements attacked Trudoliubivka in the northern part of Kherson Oblast. Ukrainian defenders successfully repelled the attack. The enemy have reached the outskirts of Oleksandrivka, it seems to be contested.

Note: There are conflicting reports about Oleksandrivka, even Ukrainian sources cannot agree on the situation there. 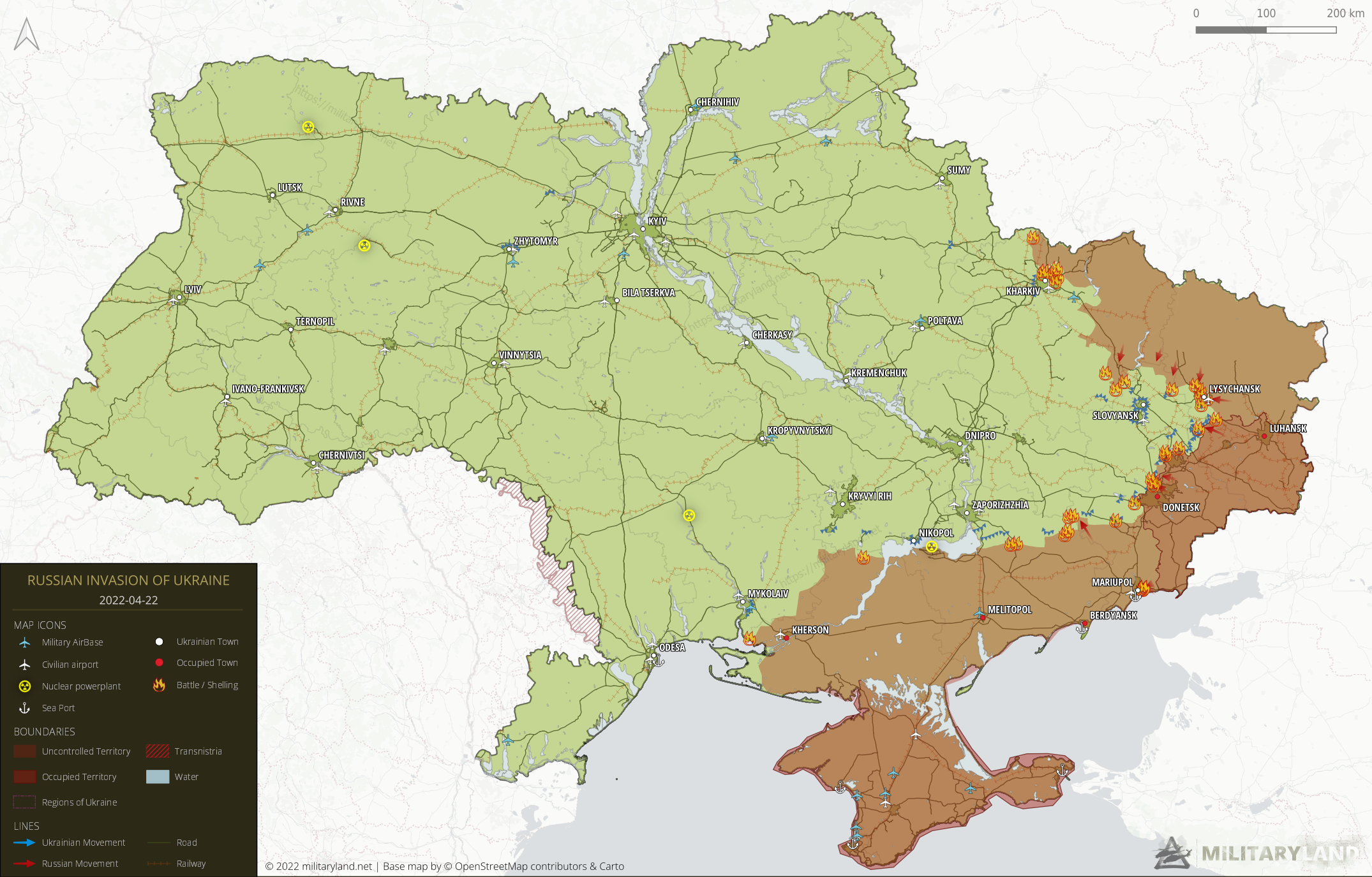 The full map uses wrong picture (day_57_fullmap.png from yesterday instead of proper day_58_fullmap.png)

https://twitter.com/KyivIndependent/status/1517789178335047680 According to Governor Oleh Synehubov, Ukrainian Armed Forces launched a successful counterattack on April 22, liberating and securing their positions in Bezruky, Slatine and Prudianka villages in Kharkiv Oblast. Very good, pushing Russian away from Kharkiv will liberate Ukr forces to move on Izium. Seems than Russia has no more intention to take Kharkiv at all, to focus on Donbass. One front less to defend and Kharkiv will be able to be used as… Read more »

Well, no, it’s still next to Belgorod, the orcish army capital. Ukraine won’t dare to pull troops away from that border.

As to “Ukrainian troops are slowly and quietly advancing alongside the Russian border in the north”: A pro-Russian telegram channel has reported an Ukrainian attempt on Friday morning to reach the Goptyvka border checkpoint on the M20 with 15 tanks from Svetlichnoye/ Svitlychne via Kosatcha Lopan, which was repelled by Russian artillery (not ground troops!). While this leaves in question which side controls Kosatcha Lopan, I think we may safely assume that Svitlychne is under… Read more »

I wonder if this has something to do with the type of device or browser. I’m only making this theory based off that some have agreed and some have disagreed according to the number of likes and dislikes on your comment. Basically, that for some people it’s working just fine while others may have your same problem. It’s working fine for me on my laptop on chrome, being that I’m only off by a half… Read more »

Usually not a problem but on this page, Mariupol and Kherson maps have that issue for me. I’m using Google Chrome.

For me it works perfectly all maps. Firefox on Linux.

Could you please send me details to info(at)militaryland.net and include screenshots if possible?