Russian offensive in Donbas has stalled. The enemy focuses on shelling Ukrainian defensive lines along the contact line, but is unable to advance forward. 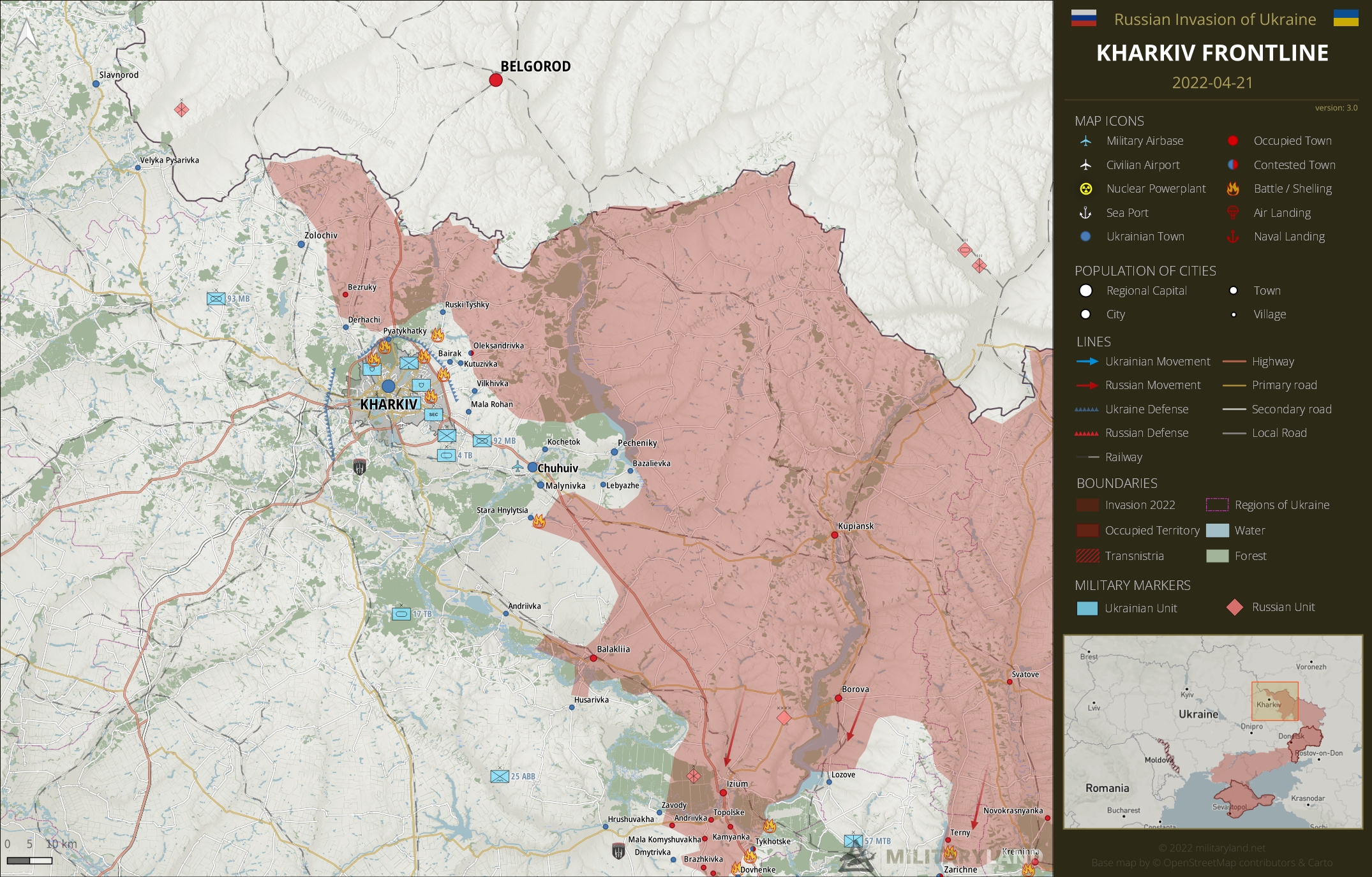 Correction: Everything points to the fact that Pecheniky and Kochetok is under Ukrainian control. 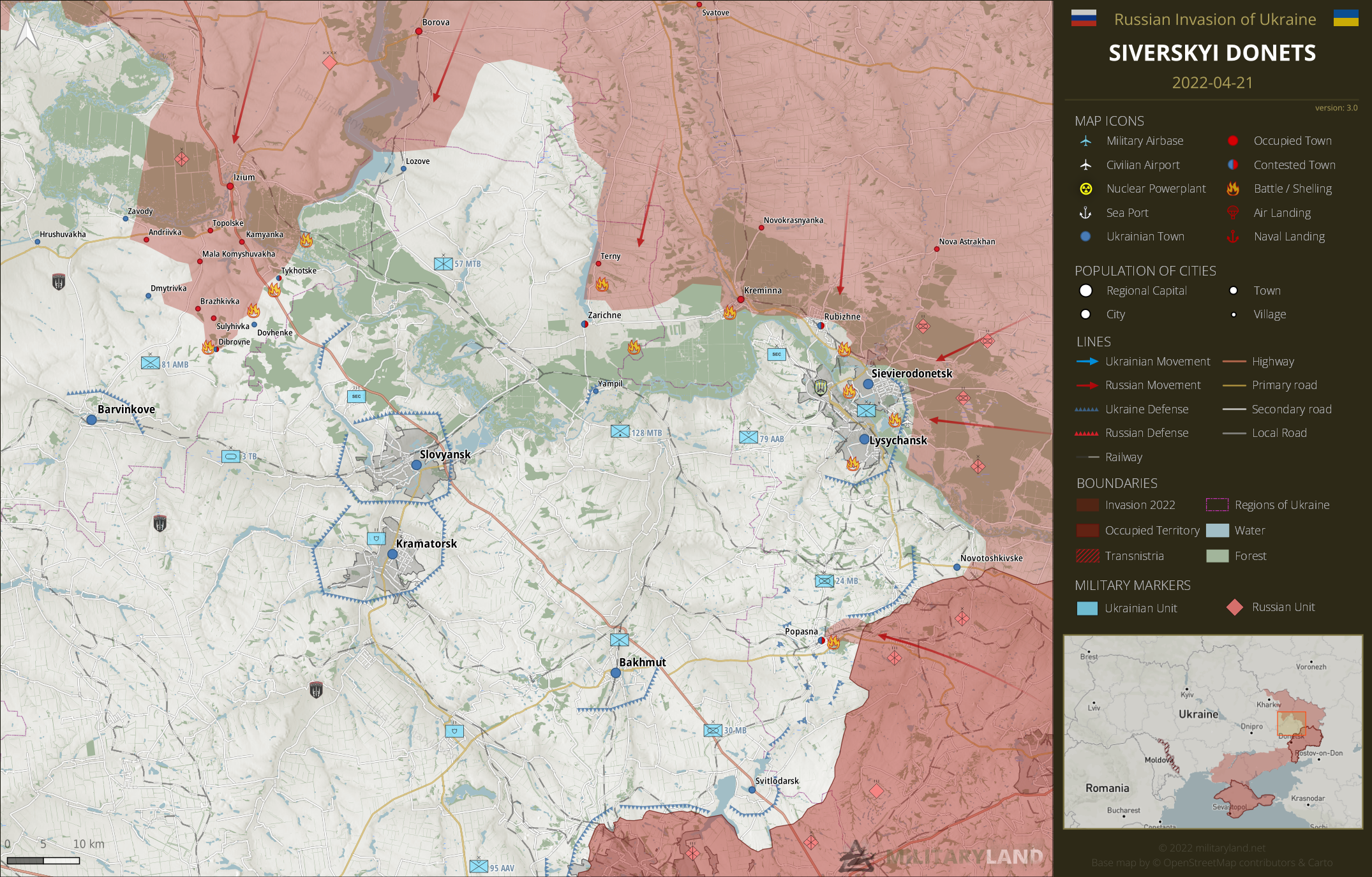 The situation at Zarichne remains unclear. The hottest point is Popasna, where Russian forces are slowly advancing to the west. 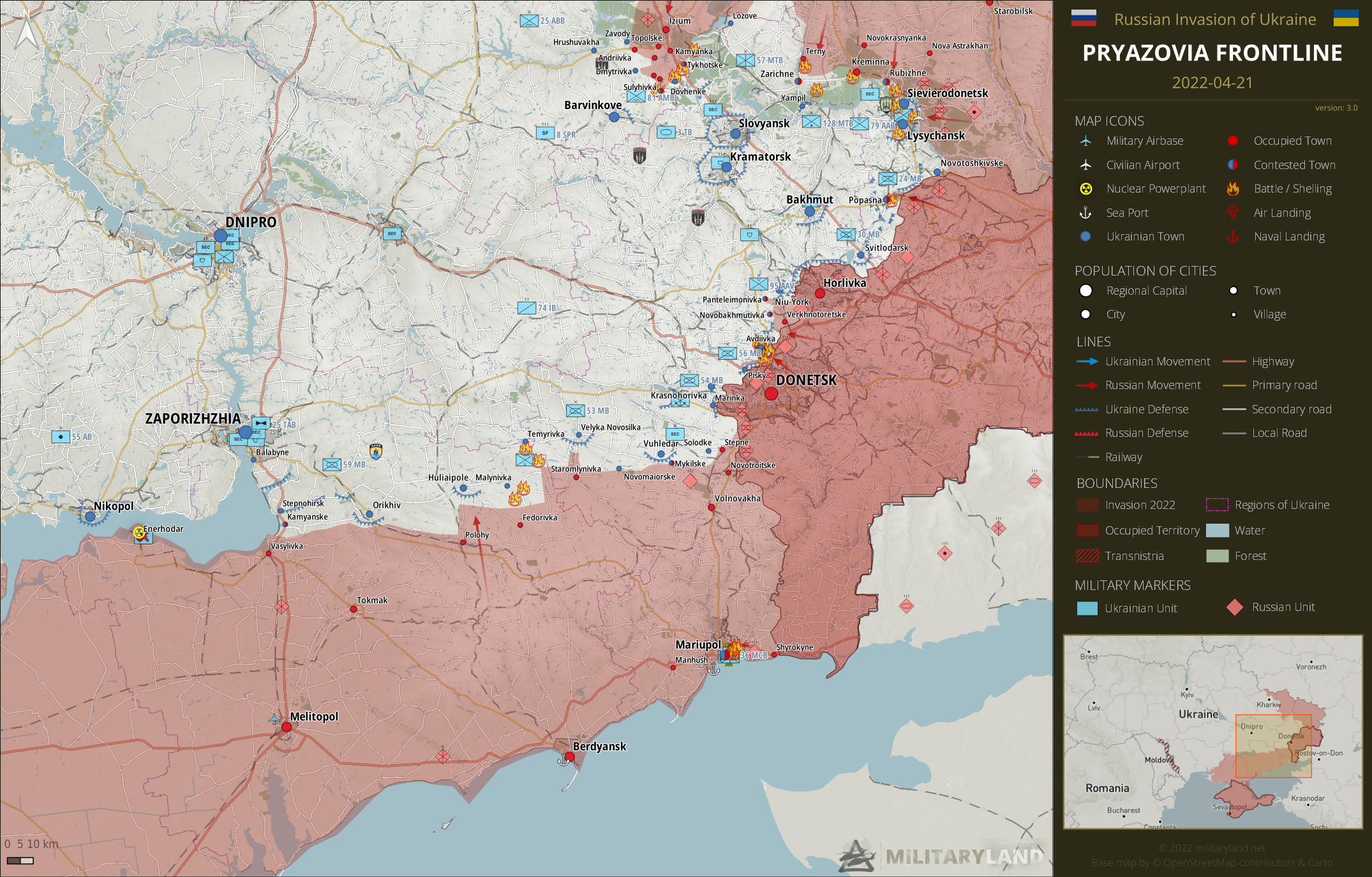 The Russian army continues to shell the town of Avdiivka, but is unable to make any progress on the ground.

Russian forces continue to focus on the area between Huliaipole and Velyka Novosilka. They reportedly advanced closer to Temyrivka, but we have to wait for more details. 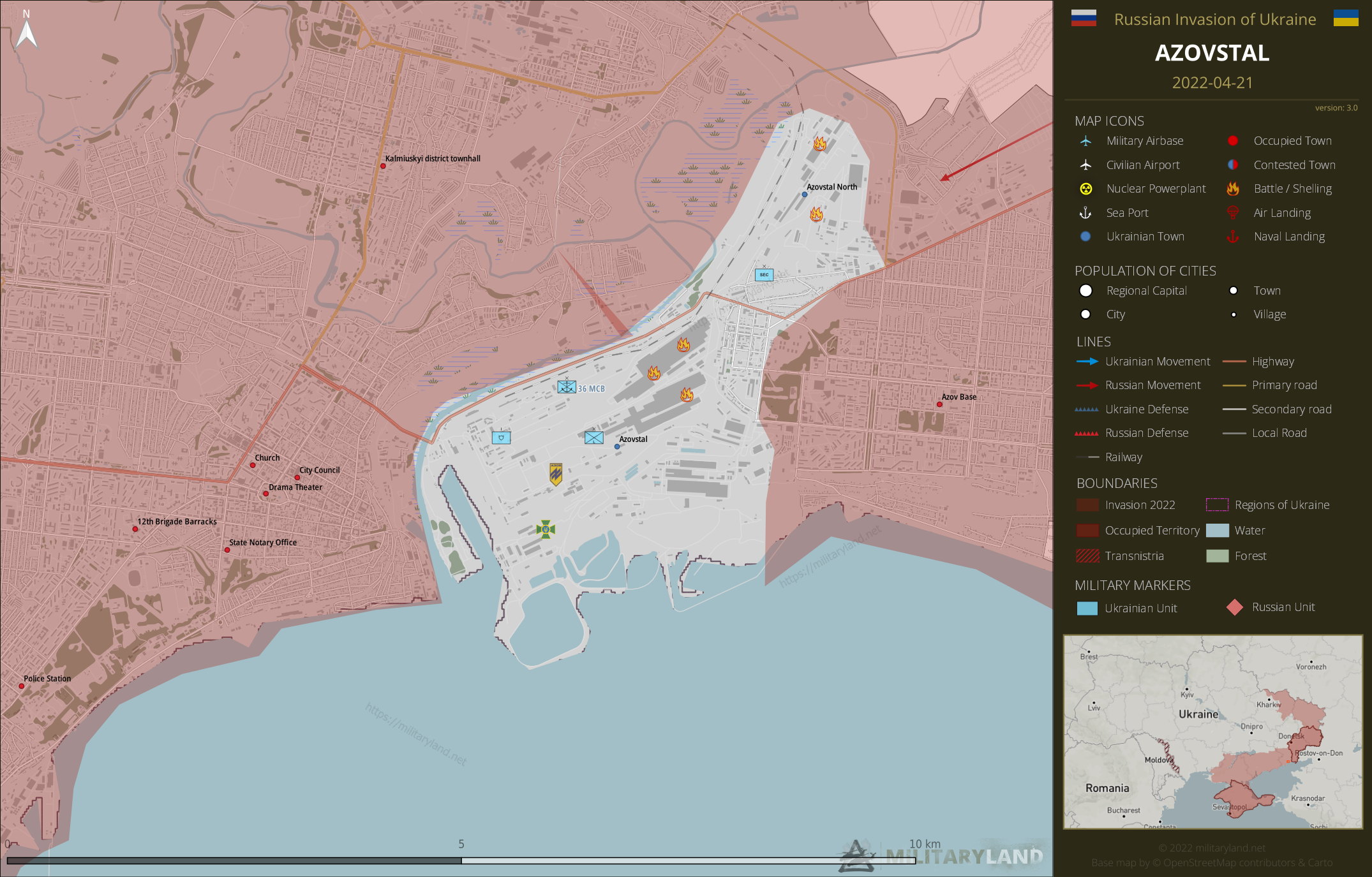 Russian claimed the full control of Mariupol today, but that’s false and Ukrainian troops remain besieged in Azovstal. Russian president Putin ordered to stop the operation to capture the plant to save the lives of Russian soldiers. The first Russian units have reportedly begun to withdraw from Mariupol. 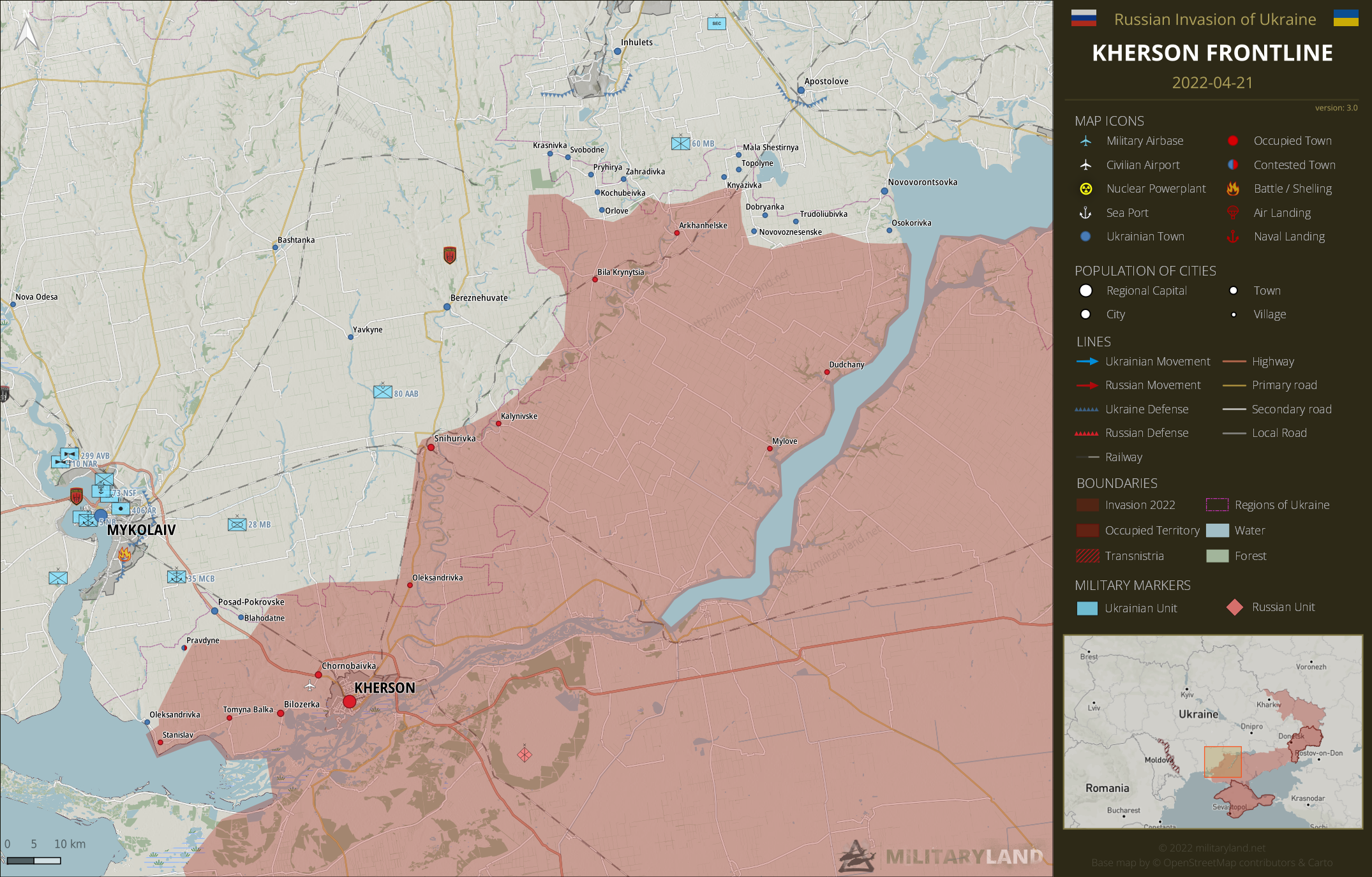 Russian forces shelled Mykolaiv by GRAD rockets. There was no change on the ground in Mykolaiv Oblast. 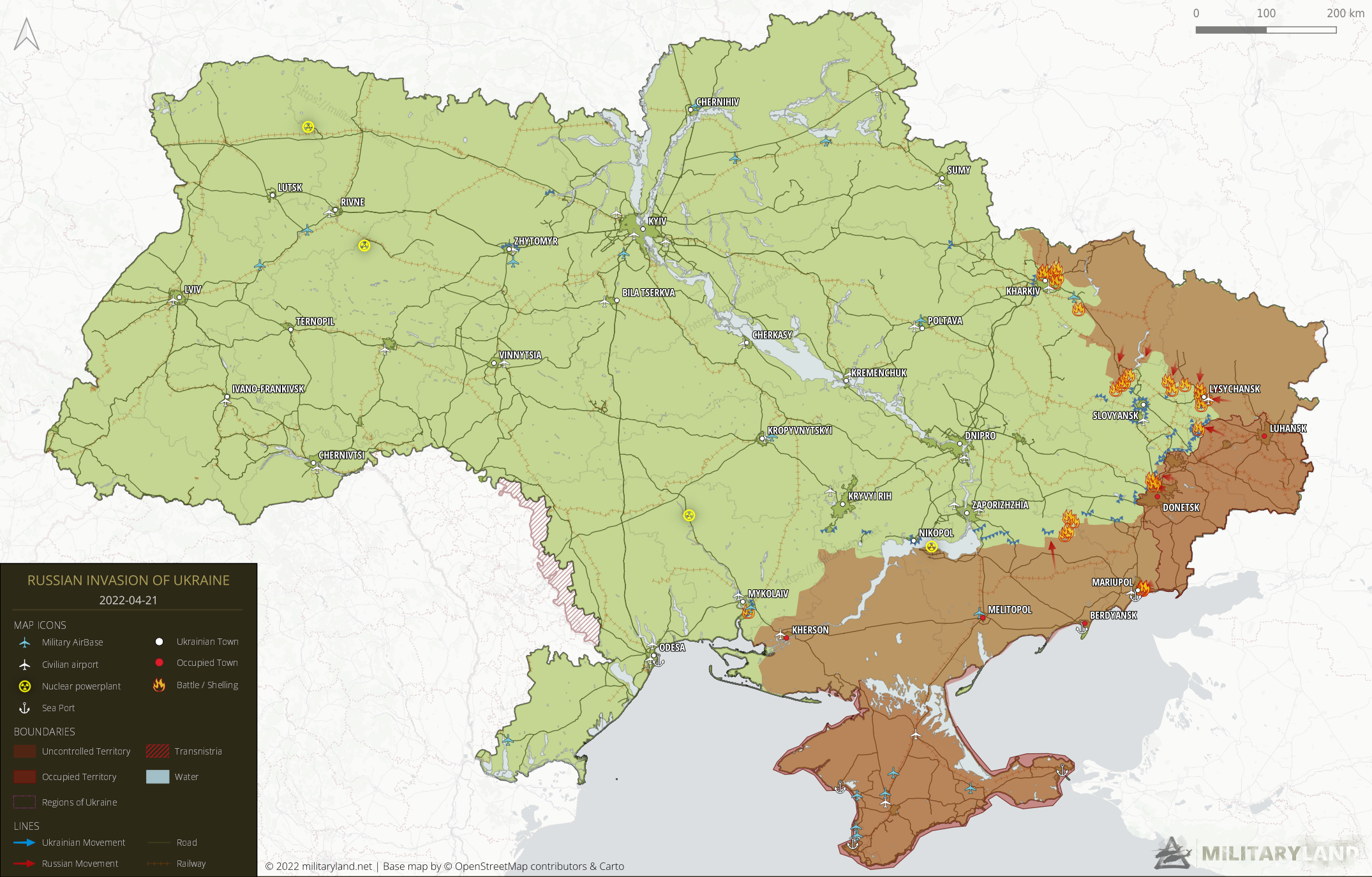 Unironically a great source though. Keep it up, J

What do you mean? The red-black flag? That’s UPA flag and the photo is from the exercise of 35th Marines Brigade.

Thank you. Americans need to see that and then imagine their Marines going into war with a Confederate battle flag in current year. Slava Ukraini!

Lozove (Next to Izium) is now under russian control.
https://t.me/voynareal/19878

Vitaliy Kim, Governor of Mykolaiv: “In the southeast direction, the front line approached the city.”

Thank you for your daily, concise reports. The Institute for the Study of War on its map shows “Ukrainian partisan warfare” in what appears to be Zaporizhia Oblast around Melitopol. Today, the Kyiv Post reports Ukrainian defenders killing about 100 Russian Federation soldiers near Melitopol. Do you have any information about the ground situation in Melitopol or its part of Zaporizhia … and at what point would militaryland.net begin offering mapped information about that situation?… Read more »

A while back, Ukrainian SF destroyed a railway between Crimea and Melitopol. There is indeed some behind enemy lines work. I’ll think about some special icon for it, but for now, the flame is enough.

Macron annonced to have (or will?) deliver CAESAR artillery system. A very powerful and efficient system largely “combat-proven”. But of course it depends of how many of these will be provided as well as the stock of ammunitions.
Good news for UKR, bad news for Russian

Mobile artillery such as the French and Czech is a big plus I think. The US provided manpower heavy howitzers are stationary and can’t redeploy fast which poses a problem when there’s a lack of air superiority or moving front lines. Guided munitions will make them useful non the less.

news : 12 CAESAr systems, ukrains training in progress. So no change on the front before at least 2 or 3 weeks.

Add news about French CAESAR artillery. 12 systems planned to be delivered soon to Marocco, so complete new uptodate systems, and not old releases. The range and accuracy is quite better than any russian systems, so you can fire quietly on Russian spots (with probable US intelligence…). Good luck for Russian. They will not be able to stay behind their front line, and they will have to move, or send their aircraft with according risks…

You guys can use this aswell https://liveuamap.com/ru/time/22.04.2022 minor things can be incorrect but its really good source of info that we use here in Ukraine. Just make sure you select correct date on top right to see most recent info

Railway destroyed near Dnipro/Novomoskovsk:
https://ukranews.com/en/news/851660-russian-military-destroys-railway-track-in-dnipropetrovsk-region-with-3-missile-strikes-governor
That’s the end of one of the supply lines.
—
“Today (4/21/2022) 42 villages were added to the list of those that have been occupied. This is at the expense of the Donetsk region,” said the aide, Olena Symonenko. ”
I can’t find any names of those villages and I don’t see it yet on your excellent maps.

Freeing several towns around kharkiv could push back Russian there, and allow UKr units to block and squeeze Izium from north. That would prevent any russian circling mouvement on the global area.

Sure wish Ukraine could advance down the T2207 towards Beryslav. If the forces in the east could hold on, a push down there would put the Russians in a bad spot, not only with the forces risking being cut off, but it would threaten Kherson and also stop a Russian objective of water from the large body of water that ends at Beryslav

It’s mostly positional consolidations so far. Kherson front is secondary compared to eastern front, the Russians are probably digging in around the bridgeheads around Kherson and Berislav. It’s mostly open terrain that’s hard to infiltrate which means numerical superiority or meticulous detailed planned offensive would be required for any successful breakthrough to overcome dug in defenses, and even then there will be high causalities for attackers. If Kherson could successfully be infiltrated to form an… Read more »

The guy behind these maps: “Russian offensive has stalled.”

This was reported after the write-up. We need to wait for more details.
Anyway, even the pro-Russian sources yesterday were saying the contact line remains basically the same.

A couple of these 42 settlements may already have been believed to be under Russian control, and mapped accordingly. E.g., today has been reported that Russian troops have entered Velykolepetyska hromada (consisting of 8 settlements), and neighbouring Hornostayivska (19 settlements in the hromada), in Cherson region. Both hromadas lie on the east bank of the Dnjepr, north of Kakhovka. Jerome has, apparently incorrectly, mapped them as “Russian controlled” from invasion day 3 (Feb. 27) onwards,… Read more »

Kharkiv and Chuhuiv are key to Ukraine’s defence of the Donbas regions. Ukrainian forces moving from these cities to the E and SE can disrupt or even cut Russian supply lines. That is why we are seeing increasing Russian artillery and missile assaults on these cities. It also diverts Russian troops from action in the east.

Now that they got Derhachi road, the next stop is the E105 highway to Belgorod. If they take that, it will be end of the northern assault. Russians can only get to Kharkiv from the east then.

From this new wave of Russian advance, I wonder how many casualties the Russians are facing in these last 24-48 hours and in the near future. Sure sounds like a bloodbath in the Eastern area. I understand numbers are generally skewed by propaganda and very hard to count independently, but I wonder if anyone has some sort of estimate.

Russian losses: On average it’s 300-400 people, on the whole front per day.
Ukrainian losses: official estimates unknown, but probably around 100-150 per day. I assume the heaviest losses are in Mariupol.

At this point I don’t think Mariupol is the heaviest source of losses. Most of what is left of the garrison is trapped in the steel plant. The Russians may opt to starve them out or level the whole sight with bunker busters and call it a day.

Russian shelling of the town of Udy, NW of Charkiw, suggests the town is back under Ukrainian control. See also my comment re Charkiw region to your Day 56 Summary.

Thanks for letting me know.

Today on twitter and some news papers I read “Senior US Def. official says Ukraine has more tanks available in country than Russia, thanks to European deliveries of Soviet-era T-72 tanks: senior defense official”. TBH This claim surprised me.