Russian army is slowly advancing in Popasna and Zaporizhzhia Oblast. Ukrainian troops conducted another breakthrough operation in Mariupol and helped fellow units near the port area.

The situation on the battlefield requires new, more detailed maps. I divided Sloboda frontline into two – Kharkiv and Siverskyi Donetsk, replaced Mariupol by Azovstal and Southern frontline by Kherson frontline. 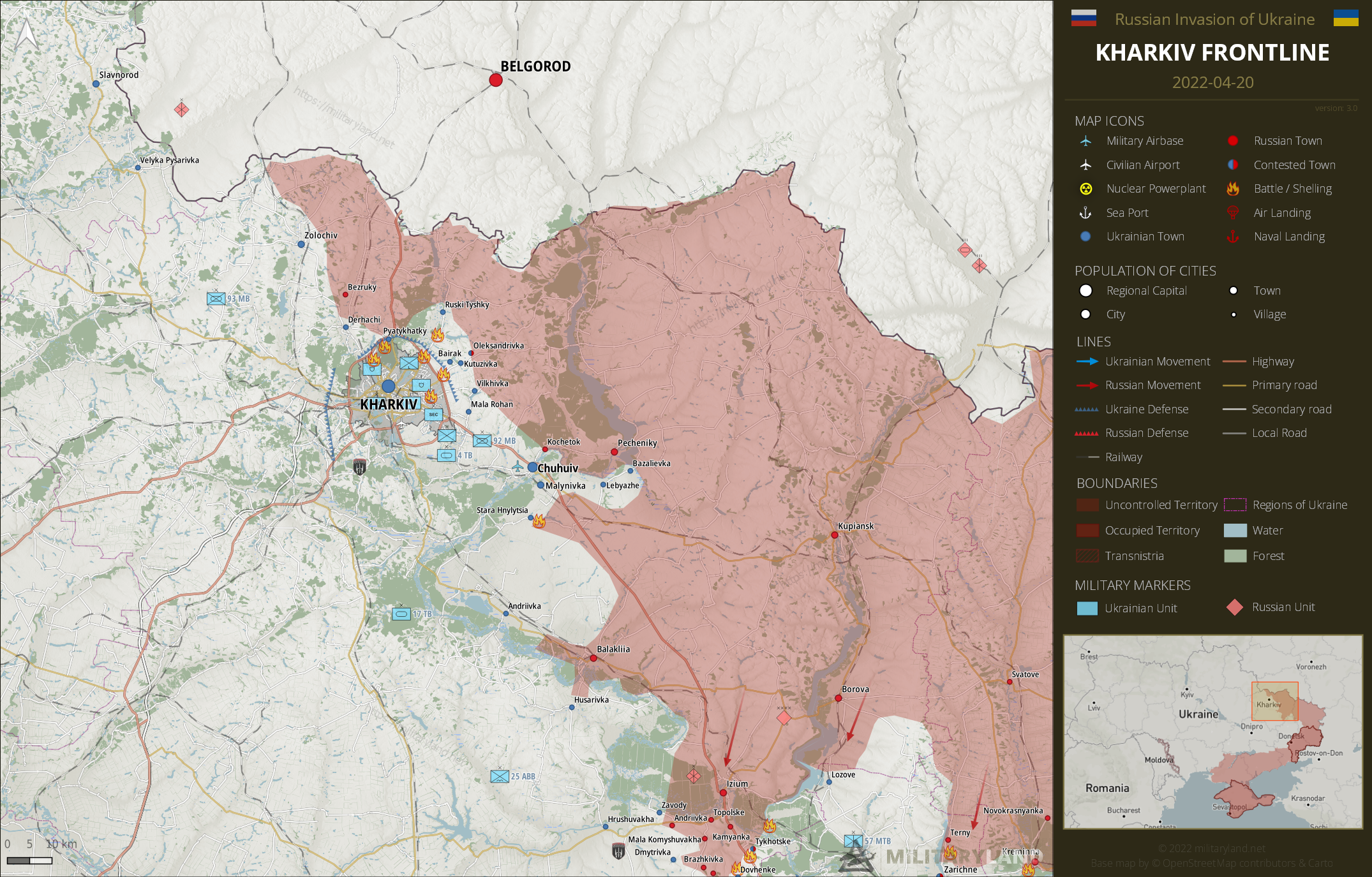 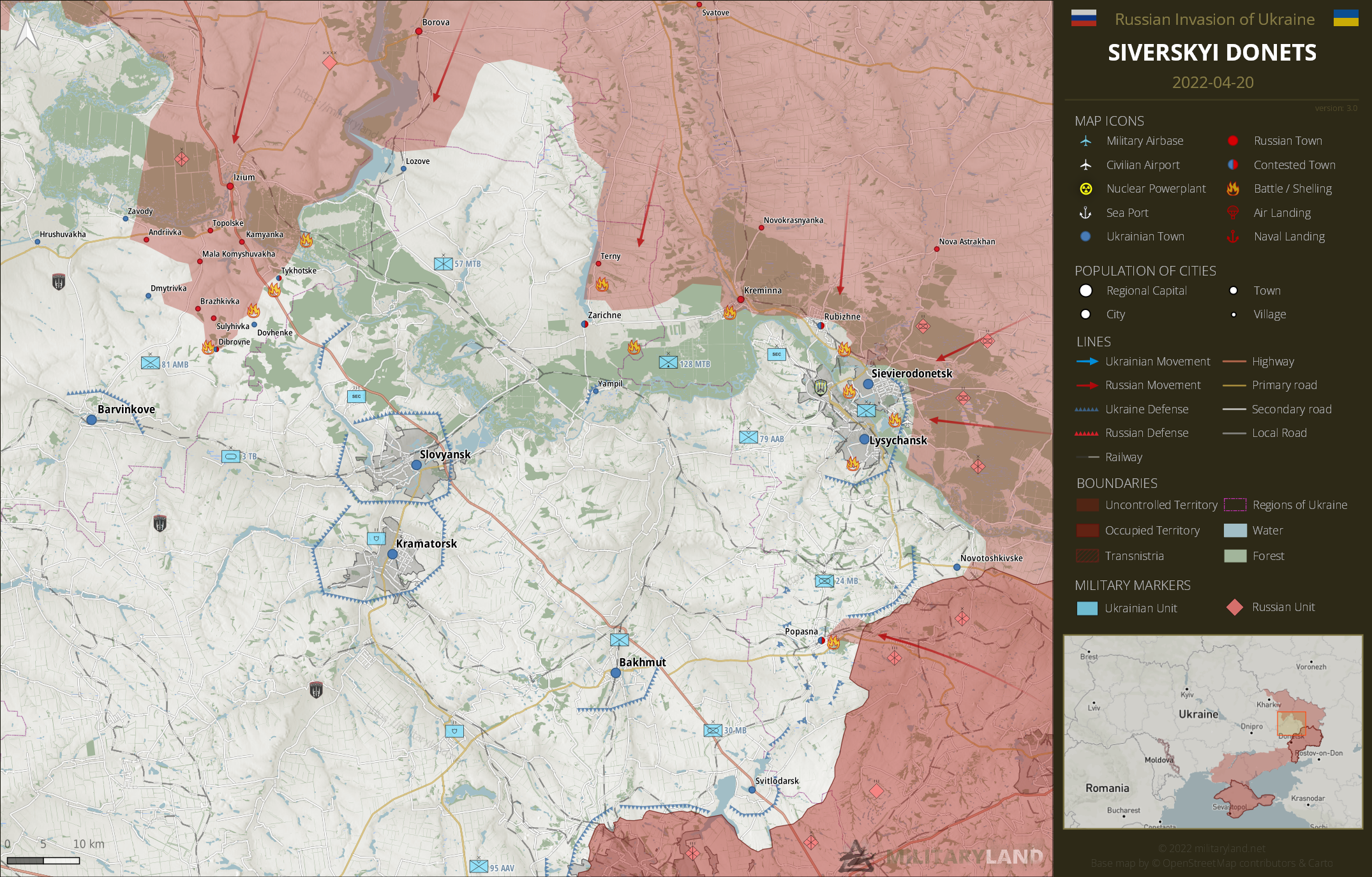 Russian forces advanced south and reached the outskirts of Dibrovne. Russian soldiers, dressed in Ukrainian uniforms, tried to seize the village of Dovhenke, but the attempt was unsuccessful.

The enemy forces are slowly advancing in Popasna. They captured a police station and residential block. 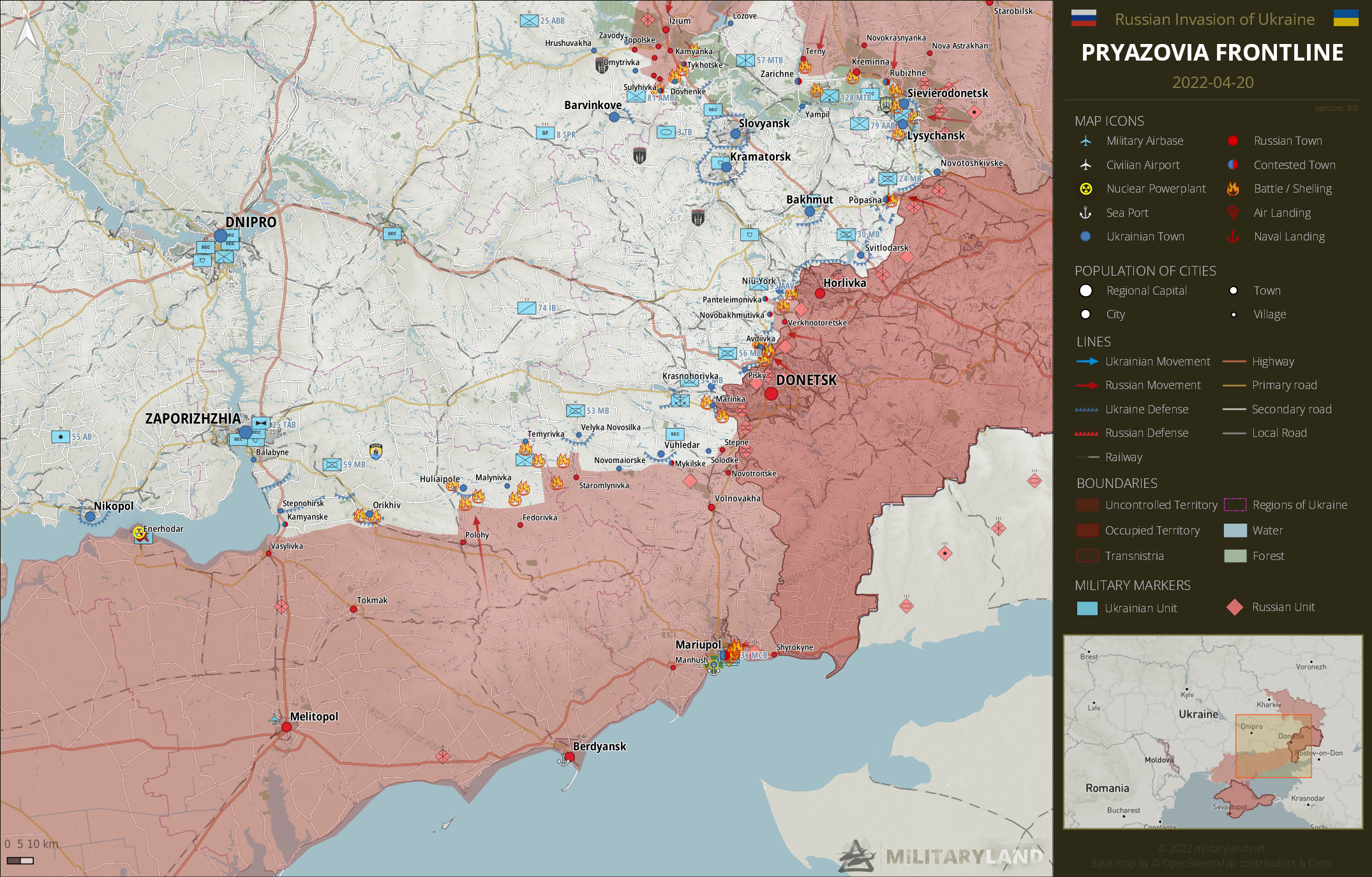 Fighting have continued in the vicinity of Avdiivka, Ukrainian defensive line continues to hold. Heavy shelling was reported in Marinka.

Russian troops have advanced on the western flank of Staromlynivka towards Temyrivka and captured a few small settlements in the area. 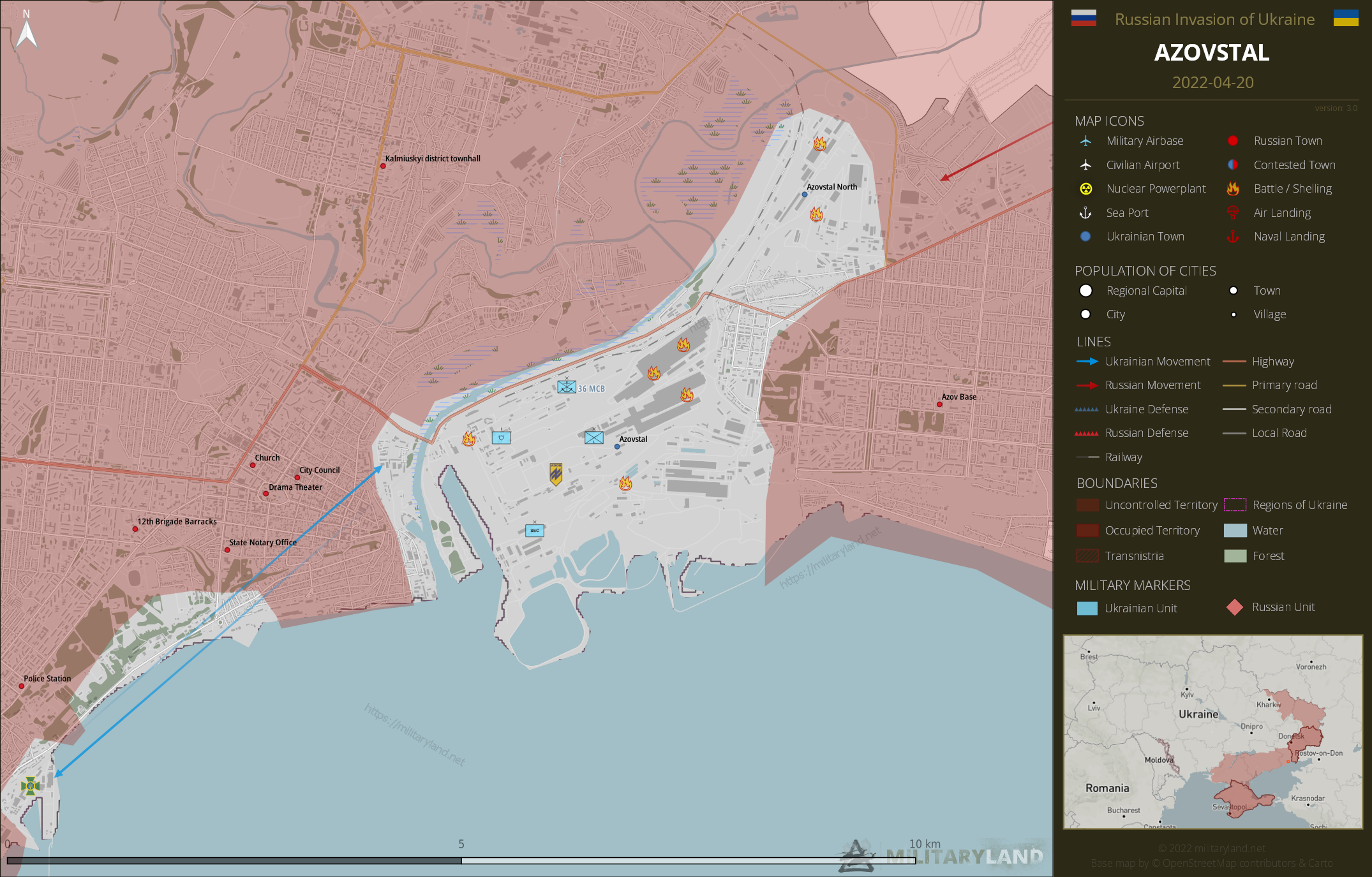 The rumors of Ukrainian resistance pocket near the harbor were confirmed. Ukrainian Marines and soldiers of Azov Regiment conducted a successful breakthrough operation towards the harbor to help fellow servicemen defending the area. About 500 fighters of Ukrainian Border Guards and National Police reportedly requested assistance after the latter one was running low on ammo. They have been successfully evacuated to Azovstal Plant. 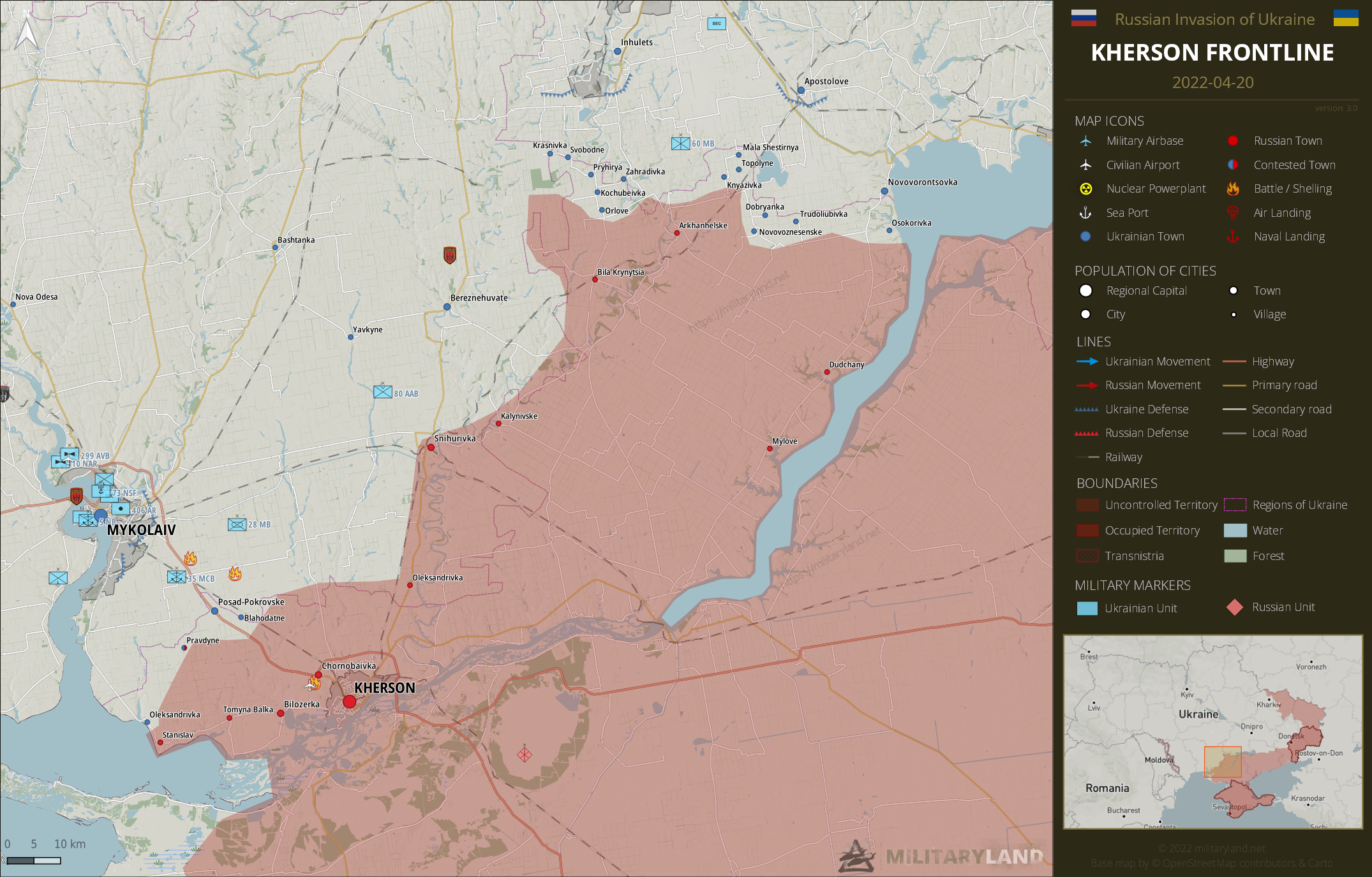 Ukraine reported shelling and skirmishes in the area between Mykolaiv and Kherson. 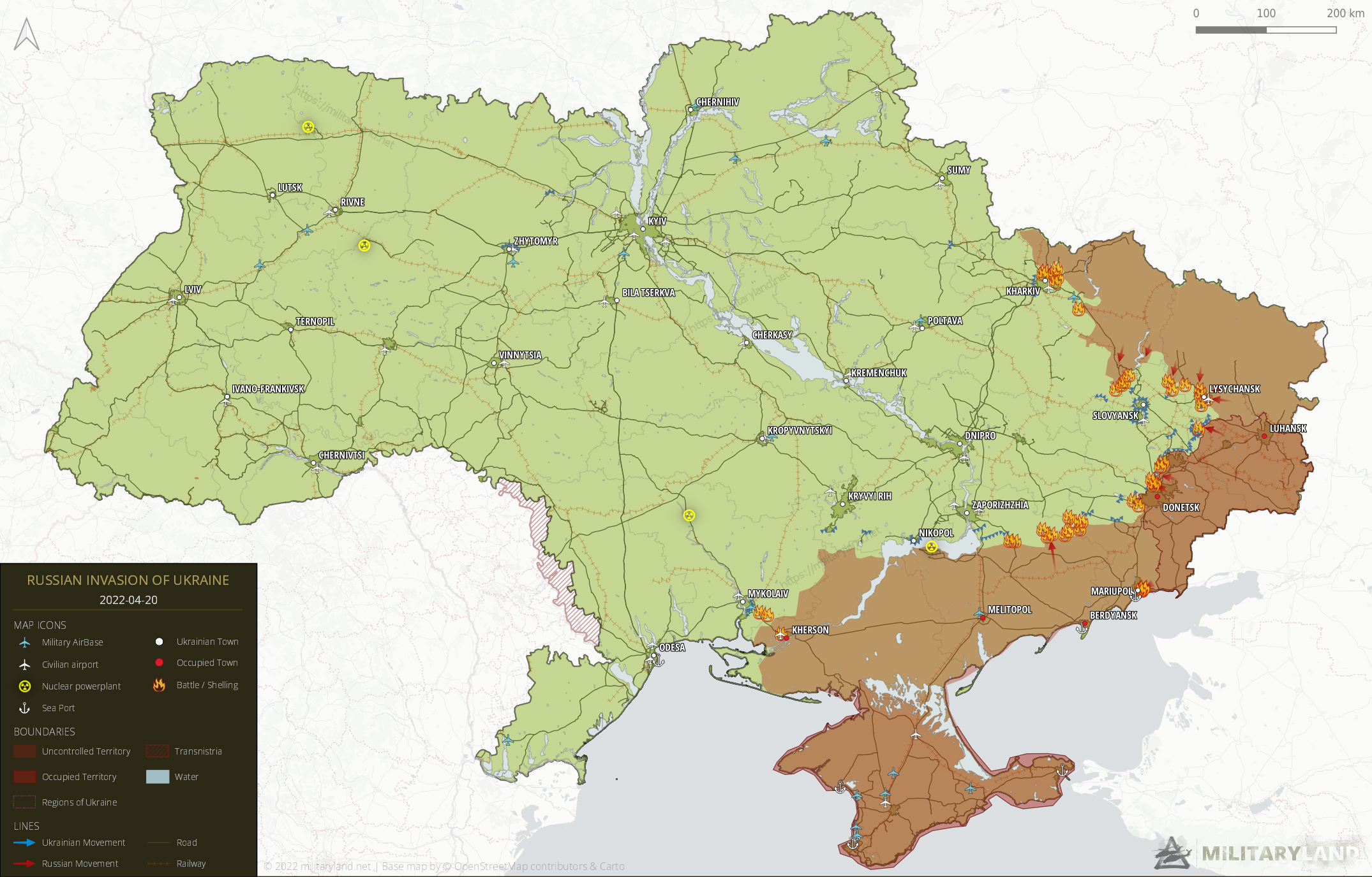 The head of Charkiv region has given an extensive operational update:
– Russian troops NE of the city, especially in Lypzi and Zyrkuny. But no mention of any Russian presence anymore in the NW (Bezruky, Kosacha Lopan etc.);
– Pecheniky area: 50/50. Russian checkpoints and convoys, but no full territorial control;
– Borowa as limit of Russian control in the SE of the region.

I dont understand this news. Surrounded 21 days? Not in south. In the village north to kherson ?

Theres been confusion here as theres an Oleksandrivka southwest of Kherson, but also a settlemt of the same name to the north of Kherson it seems. Battle reports keep getting confused as to which one is being referred to.

There have been multiple videos from both sides of fighting in the apartment building areas to the east of Azovstal in Mariupol, so I think the Russian area is drawn too close to Azovstal.

“Russian soldiers, dressed in Ukrainian uniforms” another violation of the laws and customs of war.

On twitter, @MotolkoHelp, who monitors activity of the RU forces in the Belarus, claimed: “about 85% of Russian military equipment has been withdrawn from Belarus.”