Russian forces have captured Kreminna in Luhansk Oblast, but failed to advance in all other areas. Either Ukrainian defenders were well-prepared or it was just a probe and the real offensive haven’t started yet. 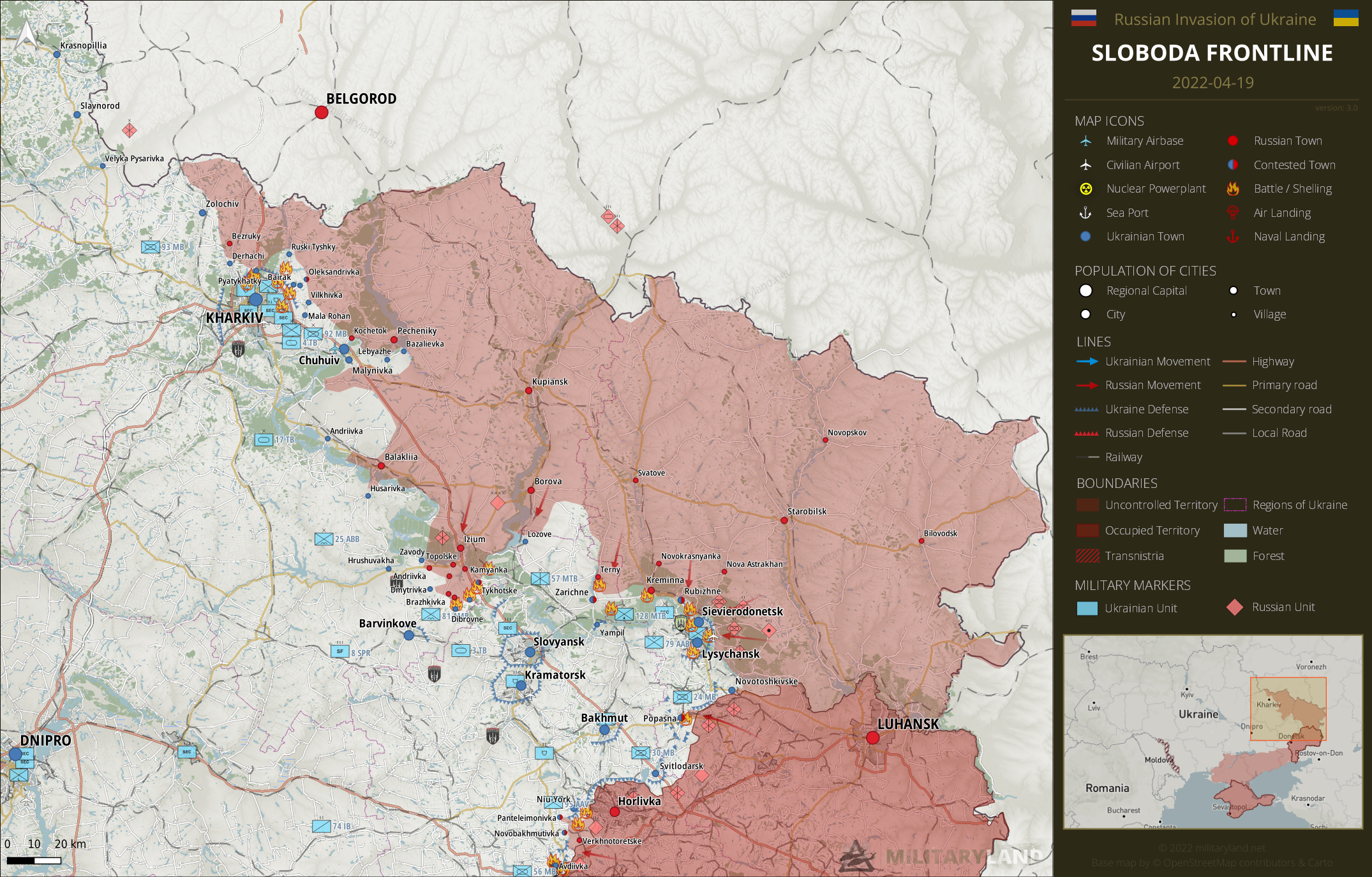 Russian army launched an assault south of Izium towards Slovyansk. Ukrainian troops repulsed the attack. The shelling of Kharkiv has continued today as well.

The Ukrainian head of military administration in Luhansk Oblast confirmed that the majority of Ukrainian troops have withdrawn from Kreminna. The fighting reportedly continued on the outskirts during the day.

We are still waiting for confirmation of Russian advance towards Zarichne. Ukrainian forces repelled attacks in Rubizhne and Popasna, but Russian forces continue to maintain partial control of these cities. 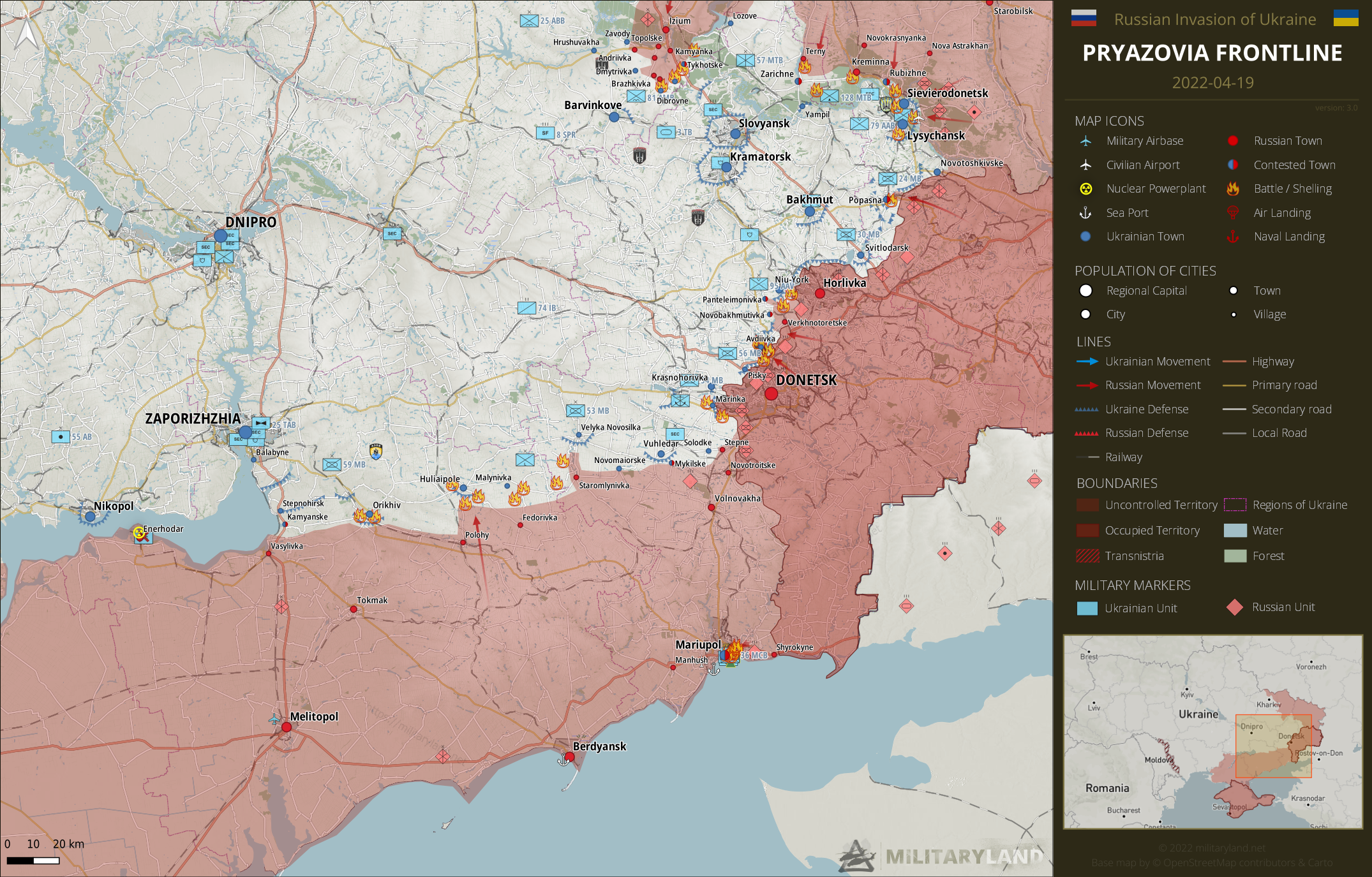 Russian troops advanced deeper into Marinka, but were unable to hold the newly gained positions. Ukrainian forces conducted a successful counter-attack and regained the full control over the village in the afternoon.

Ukrainian defenders repelled all attacks on Avdiivka near Donetsk.

The main push of Russian offensive in Zaporizhzhia Oblast is in the area between Huliaipole and Velyka Novosilka. The enemy reportedly reached Malynivka, but there is no visual to confirm it. Ukrainian positions at Orikhiv and Huliaipole came under heavy artillery fire overnight. 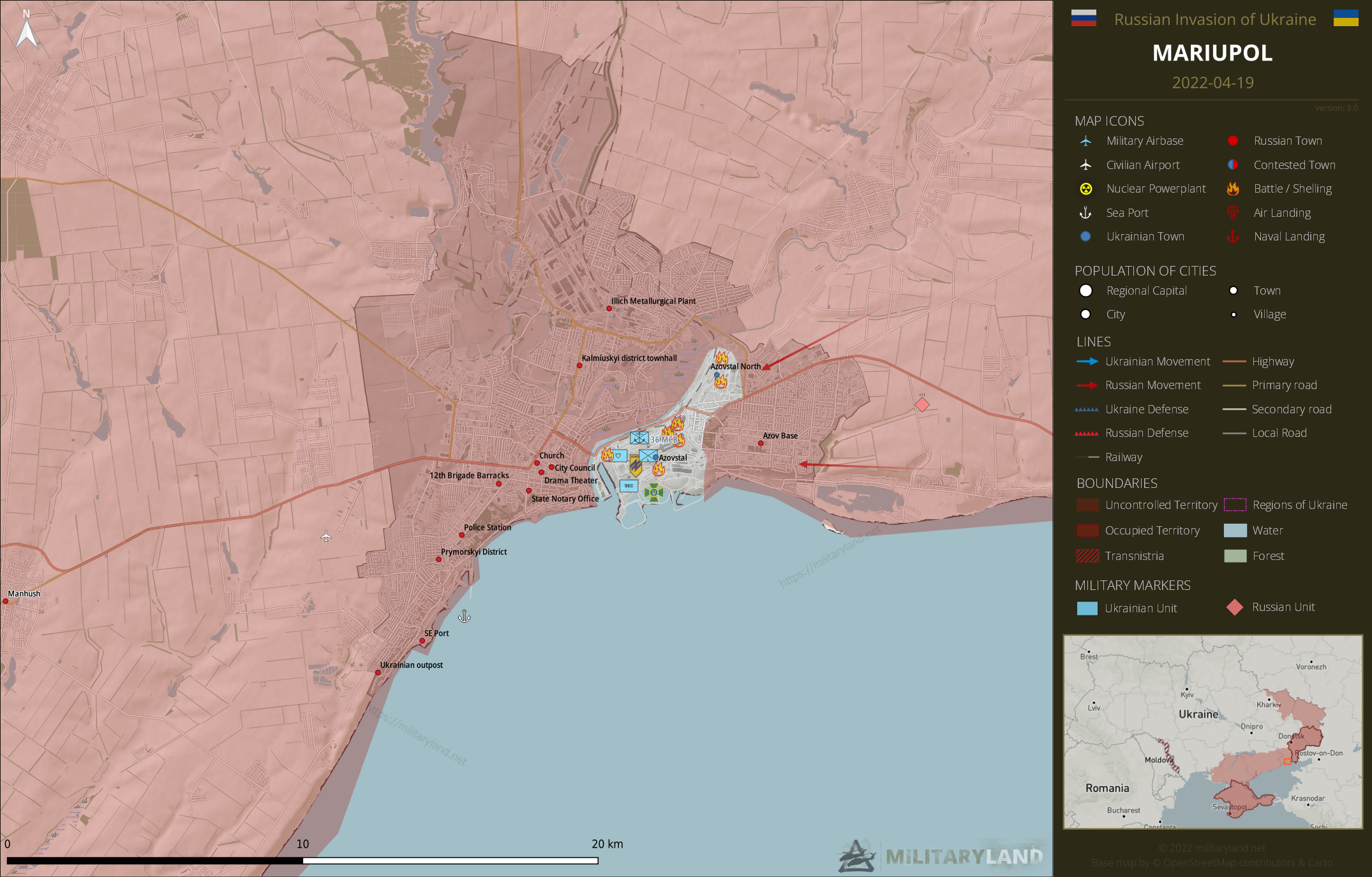 The remaining Ukrainian units have withdrawn to Azovstal plant and the auxiliary complex nearby. The leaders of self-proclaimed DNR announced the start of operation to capture Azovstal in the afternoon. 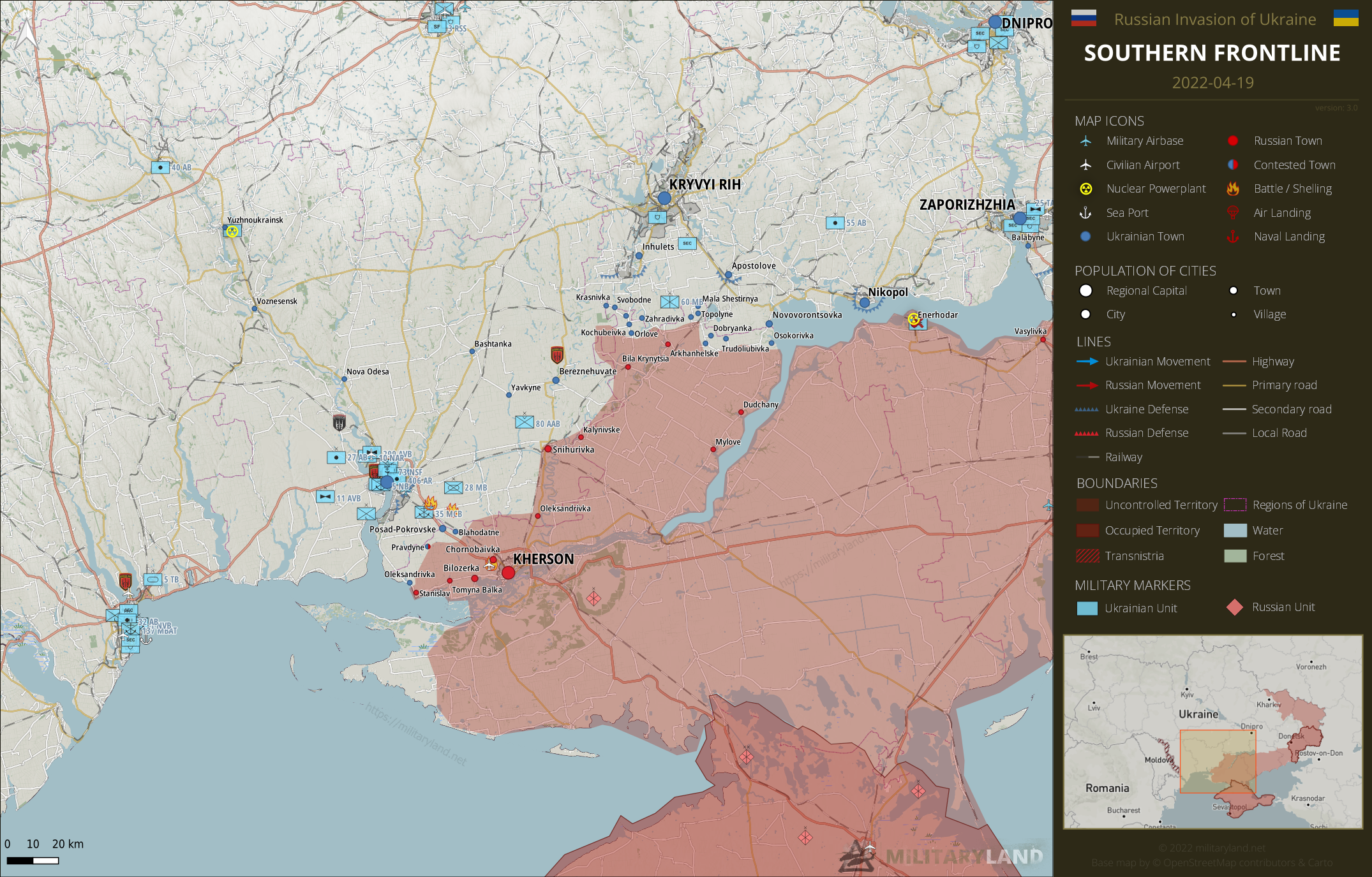 Ukrainian artillery reportedly targeted Chornobaivka again. Apart from that, there was no change on the ground. 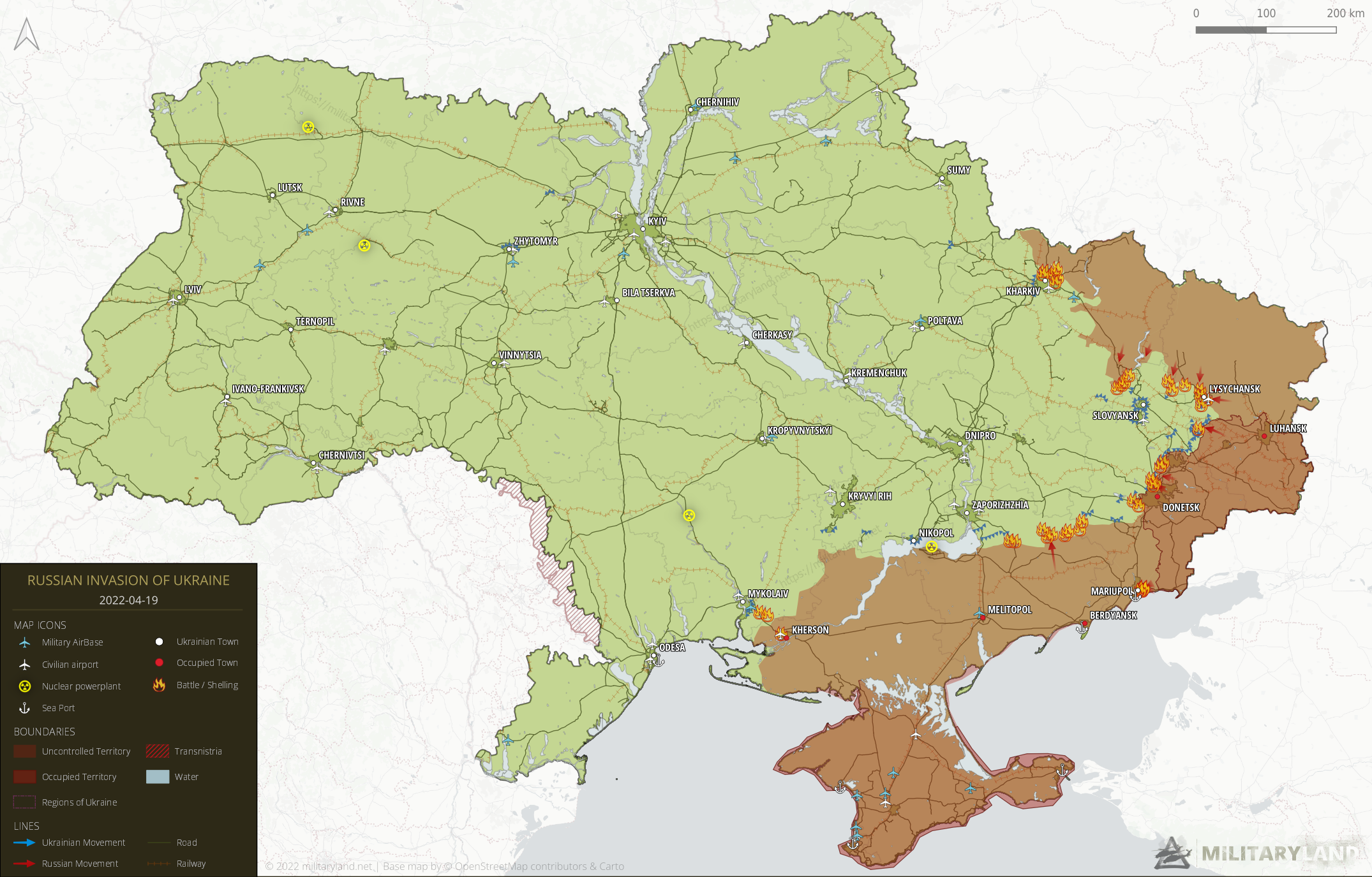 Luhansk and Donetsk oblast.
Ukrainians defended attacks at Rubizhne and Severodonetsk. Fighting in Kreminna and east of Zarichne.
Russians tries to reach Lyman from north. Fightings in Zelena Dolina.

Since a new offensive is starting, maybe a new color for advances from day 53-54?

there are two of them.

the northern one is in mykolaiv oblast, the southern on in kherson oblast.

Your southern map seems to show 2 cities around Kherson called Oleksandivka? One is north of Kherson and one tot the west.

There are actually 6 towns and 103 villages called Oleksandivka in Ukraine.

That’s because there actually are two towns/villages with that name in Kherson Province. It caused some confusion in the Twitter world. But, Mr MilitaryLand shows things correctly…the one on the coast is defending against daily Russian attacks.

I made that mistake before as well to be fair 😉

You are mistaken they are not both in Kherson. One is just over the boarder in Mykolaiv oblast. But due to the close proximity of those 2 towns and the same name they get mixed up often.

2 out of over a hundred in Ukraine: https://en.wikipedia.org/wiki/Oleksandrivka

They also appear on google maps, so i am assuming they actually both exist with that name

Because there are many Oleksandrivka’s in Ukraine.

Yes . A lot of this city name in ukrain.

Your map shows two towns on the outskirts of Kherson with the same name. Oleksandrivka one Russian held and one Ukrainian held. I reported this yesterday, but you Deleted my comment without a polite explanation.

See comments below for explanation re Oleksandrivka.

Your comment wasn’t deleted on purpose, but lost in the spam. Apologies.

Actually, there is a third Oleksandrivka in Cherson region. It lies on the peninsula south of the Dnjepr Gulf. Currently, there is little danger to mistake it for one of the other two a/m, but that may change in the course of the war. Olexandrivkas seem to be everywhere in Ukraine. A handful of them may date back to the time of Alexander the Great, but most of them seem to refer to Tsars Alexander… Read more »