An hour before midnight, Russian army has launched the second phase of invasion. The primary goal is to capture Donbas (Donetsk and Luhansk Oblasts). We’ll know more details tomorrow, but a lot of shelling and attempts to breakthrough were reported along the contact line. 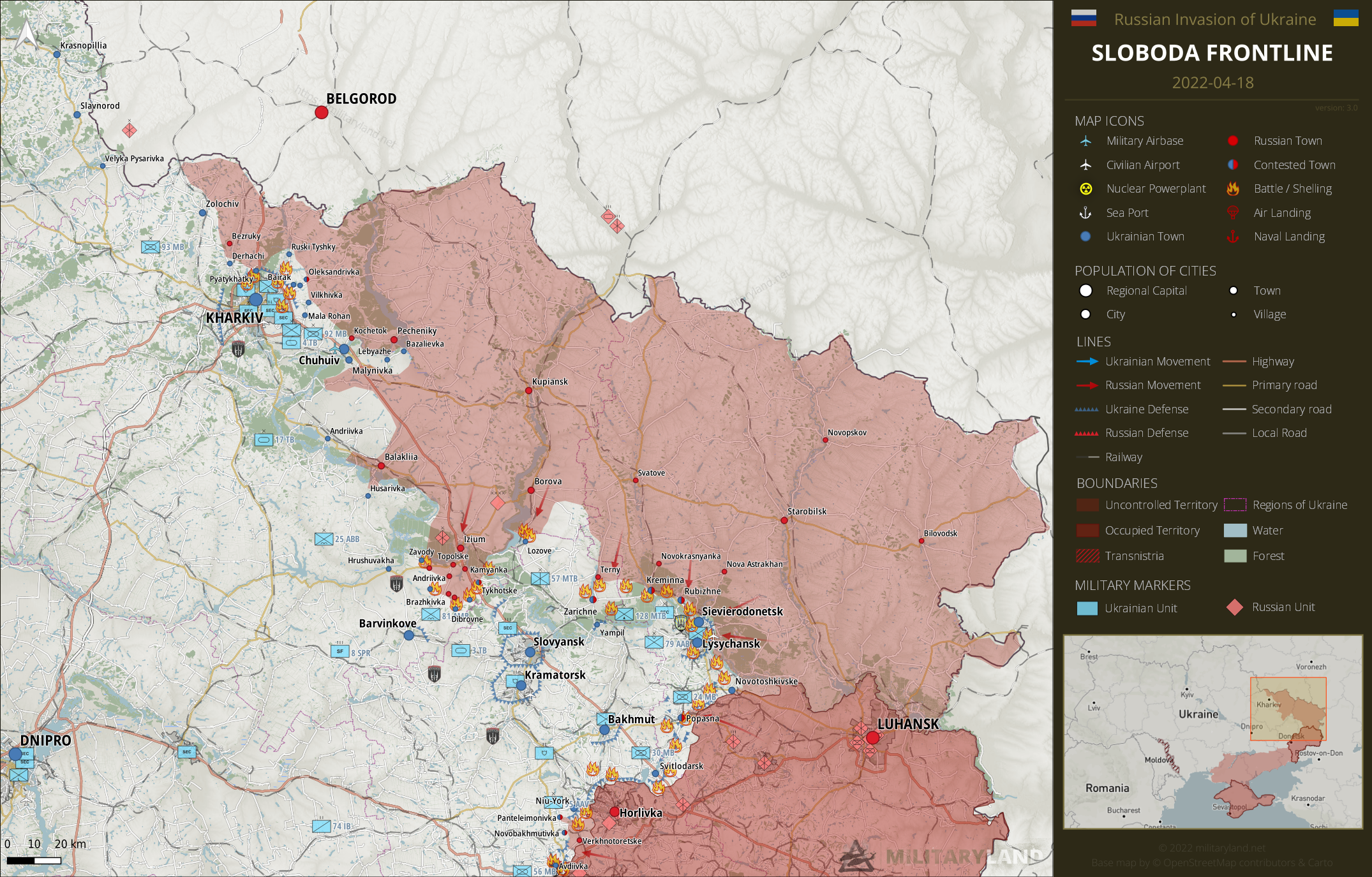 Russian reconnaissance elements advanced towards Zavody, Dmytrivka and Dibrovne. They met with Ukrainian resistance and withdrew back towards Izium. In the evening, Ukrainian officials reported the Russian army amassed up to 25 thousand soldiers near Izium and is attempting to push towards Slovyansk.

The head of Luhansk Oblast said Ukrainian troops made a tactical withdrawal from Kreminna and the city has been captured by advancing Russian forces. However, this was later denied by the presidential adviser Arestovych. According to him, the city is contested, and the battle is ongoing.

There is an unconfirmed report that Russian troops have reached Zarichne, between Terny and Yampil. 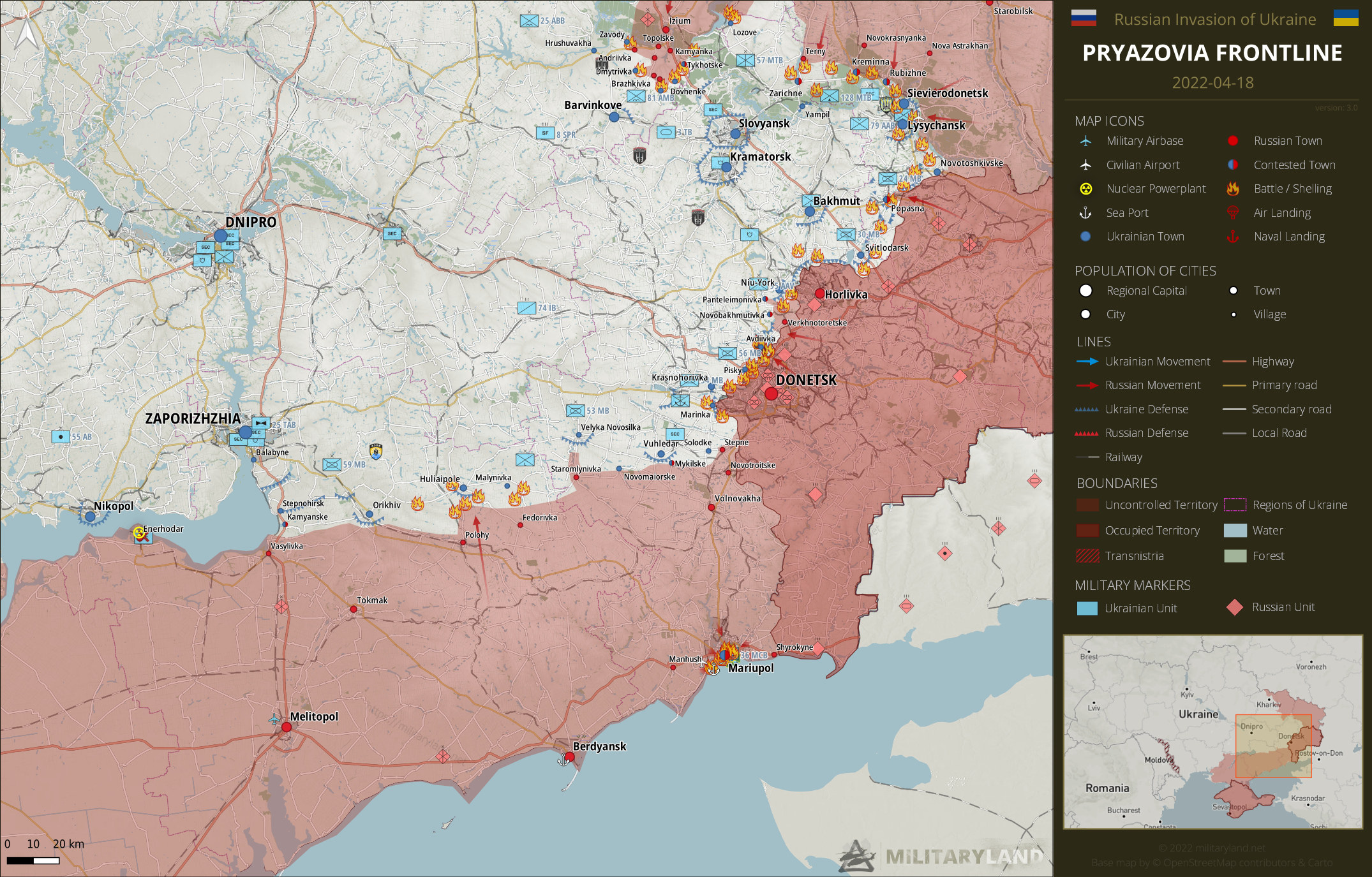 Heavy shelling was reported along the whole contact line. Russian troops are reportedly attempting to break through Ukrainian positions near Avdiivka.

Russian forces have launched an offensive operation towards Huluaipole. Ukrainian sources are reporting heavy shelling in the city and close vicinity. 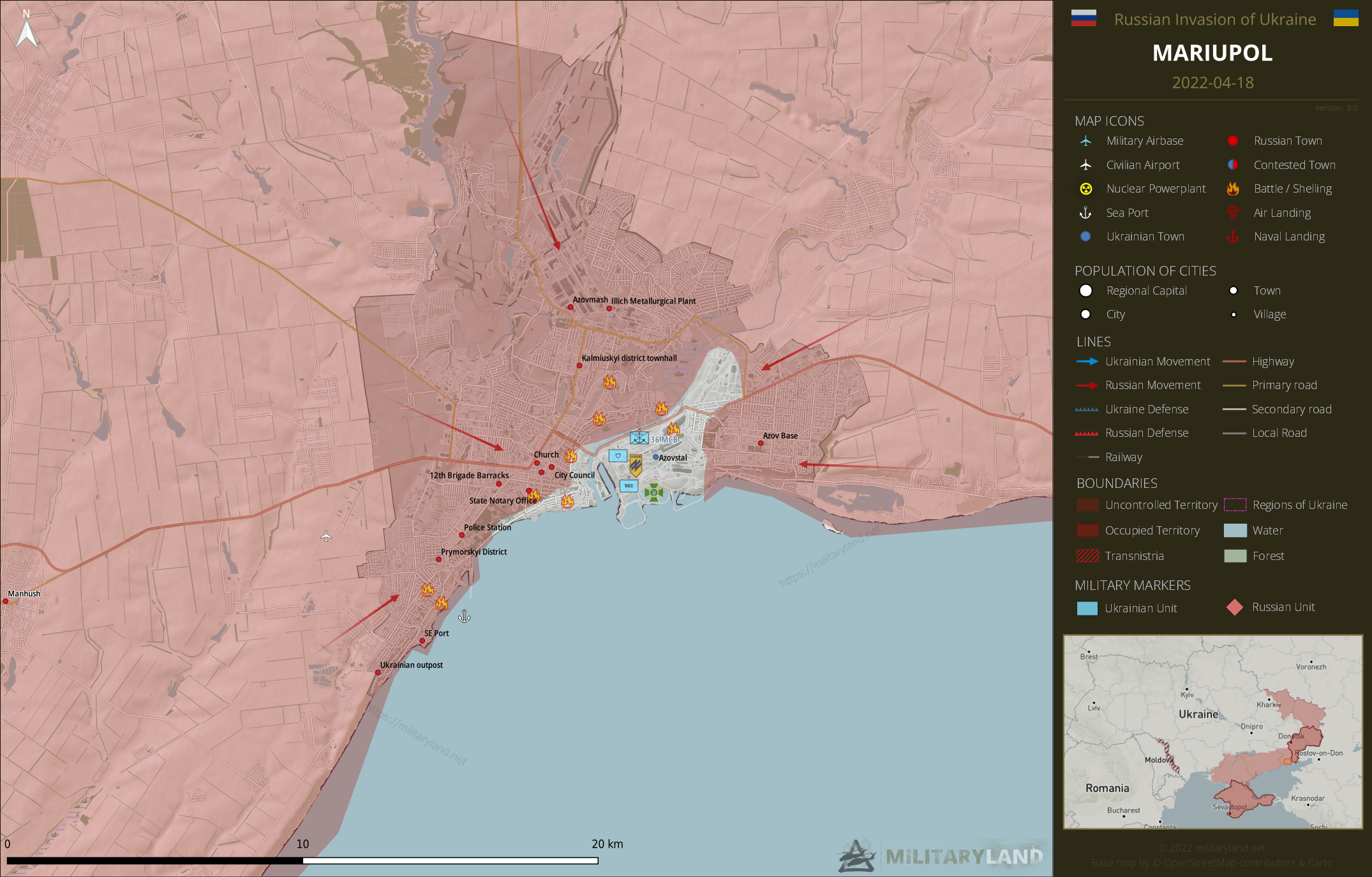 Azov Regiment released a drone footage of their ambush of Russian convoy. If the video is recent, then there is still the Ukrainian presence south of the State Notary Office. The video was geolocated exactly on the marked border. 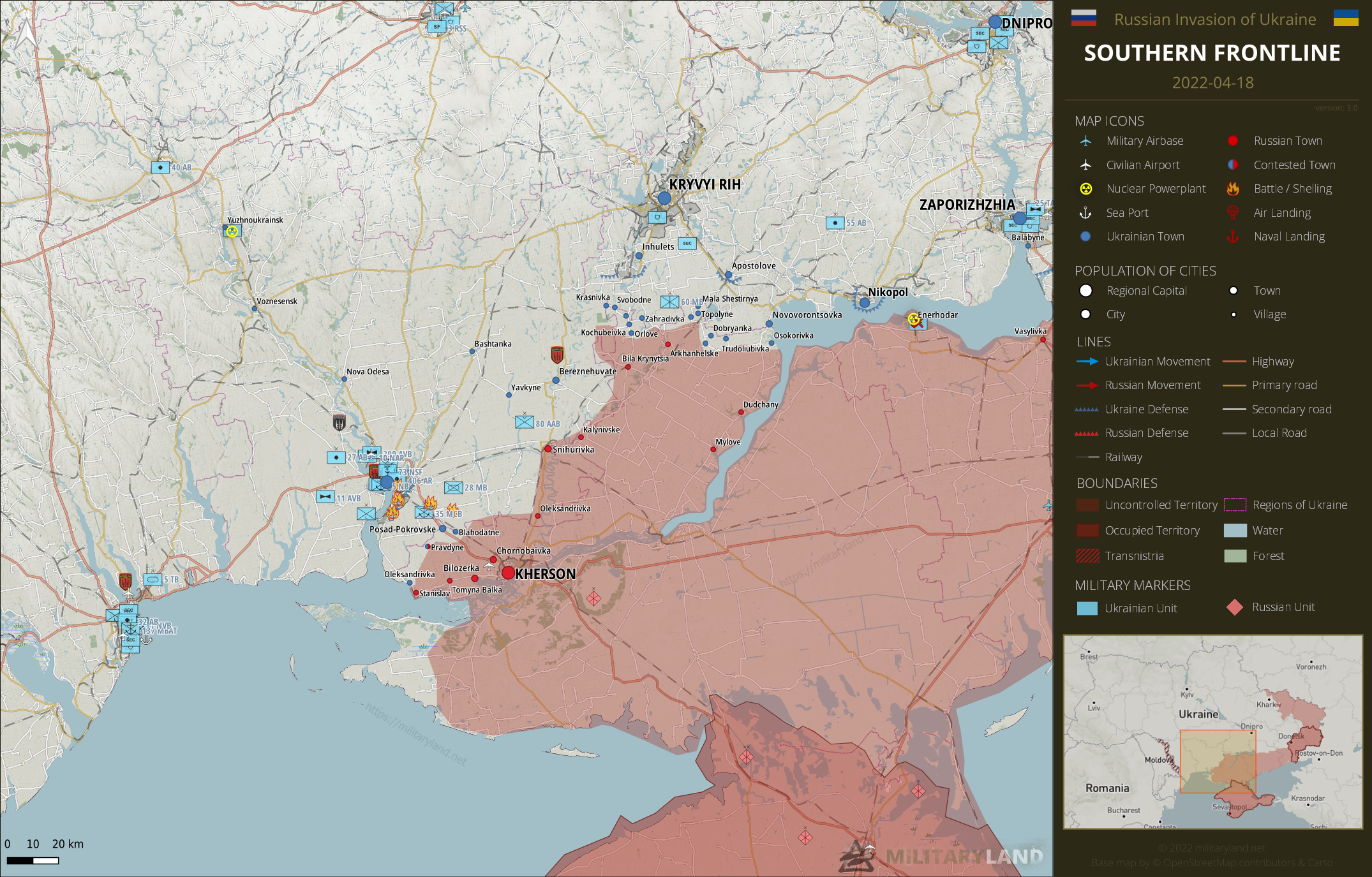 Russian forces shelled the regional capital in the evening. There has been no movement on the ground. 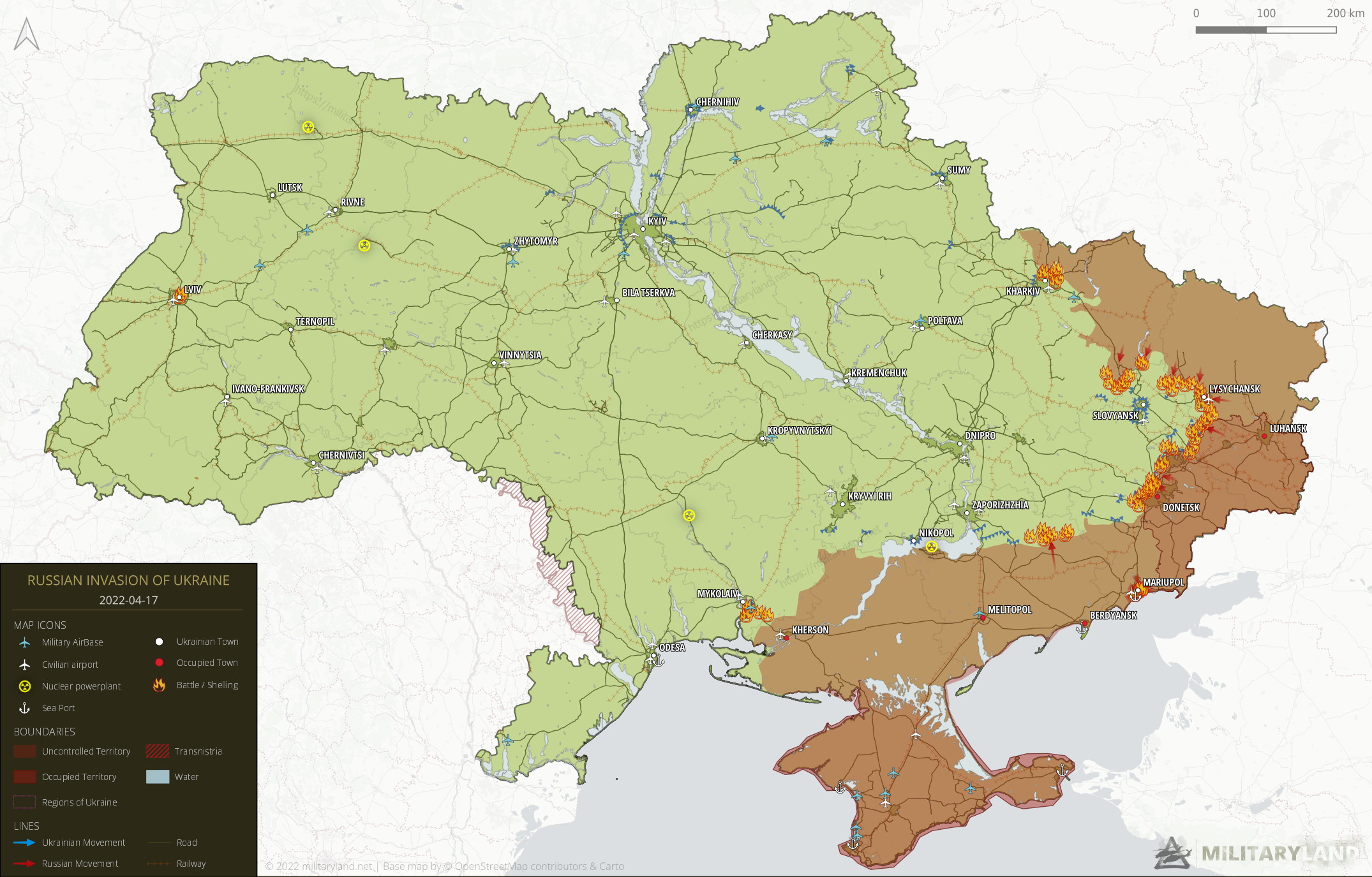 I love your maps and daily summaries. Best was to quickly take in the current military situation. However the events of the war have overtaken the alignment of your maps. Could you make one that shows the eastern front from Kharkiv to Mariupol. Since operations around Kharkiv and Izium and interdependent it would be nice to have them on the same map, as well as the rest of the Donbass front. Thanks for all you… Read more »

I sincerely hope that one day Arestovych will make it to the day’s photo banner, like here:
https://thedreizinreport.com/2022/04/17/new-thrills-await/
The dude’s efforts are just as important as any soldier’s, if not more at this point.
Seriously though, the maps are great (honestly, no sarcasm), and as objective and accurate as it is possible these days. But replaying what Arestovych says is … suboptimal. just my 2 cents.

There is something that we will keep the ukrainian alive and strong.
If they win that battle they will certainly win the war. Putin will not have a third shot.

Great work. Please, do the changes by a differerent color to see faster what happened at the last time. Thanks.

Can you please give the exact coordinates of the below recent action? I have been unable to find it on the map

“Azov Regiment released a drone footage of their ambush of Russian convoy. If the video is recent, then there is still the Ukrainian presence south of the State Notary Office. The video was geolocated exactly on the marked border.”

It is strange to think that tomorrow we may know if the war is lost or won. I really hope that Ukrainian defenders hold and then some counterattack from Kharkiv will cut russian army from their logistic. And another one will liberate Kherson…

We are a loooong way from seeing the end of the war. Be patient.

Yee, agree. Hope, that Ukrainian army will be able to repel an attack of russia and after this defeat, they will go to counterattack. In my opinion, the Kherson front the most important, if they can release Kherson, Ukraine will go to Melitopol to cut supply logistics for Donbass.

Very unlikely. If the Russians are having problems with logistics the Ukrainian situation is much worse. You need a massive constant flow of fuel, food, ammo, material, trucks to supply any offensive. Ukraine does not have that capacity and even if it did those convoys would be targeted by the air. The only chance for Ukraine is to play defense and hope that Russians give up the attack.

The aim of the defence is not to hope the Russians give up, but to kill Russians and destroy their equipment on a large scale.
Ukrainian offensive is likely to be when the ground hardens, after several weeks more of destruction by Ukrainian artillery.
Ukrainian convoys are not targeted from the air – Russian Air Force is very hesitant to fly over Ukraine.

A defender can win a war. At some time the cost for the battle is so heavy for the attaker prefres to leave. This is what happened at Kiv. Also, During WWI in 1918 germans tried to break the frontline in a last assault… that result in a full defeat with a complete counter-attack. We can say that the clock is running for Ukraine, so it means that Russia has to do something in the… Read more »

I don’t see any real endpoint in sight. Maybe if Ukraine completely collapsed but that’s not going to happen. On the Russian side I think they are trapped by the sunk cost fallacy.