Ukrainian forces have reportedly liberated a few villages near Kharkiv and are slowly pushing towards Kupiansk. Russian troops in Mariupol captured the Prymorskyi District, and the remaining Ukrainian troops have withdrawn towards Azovstal. 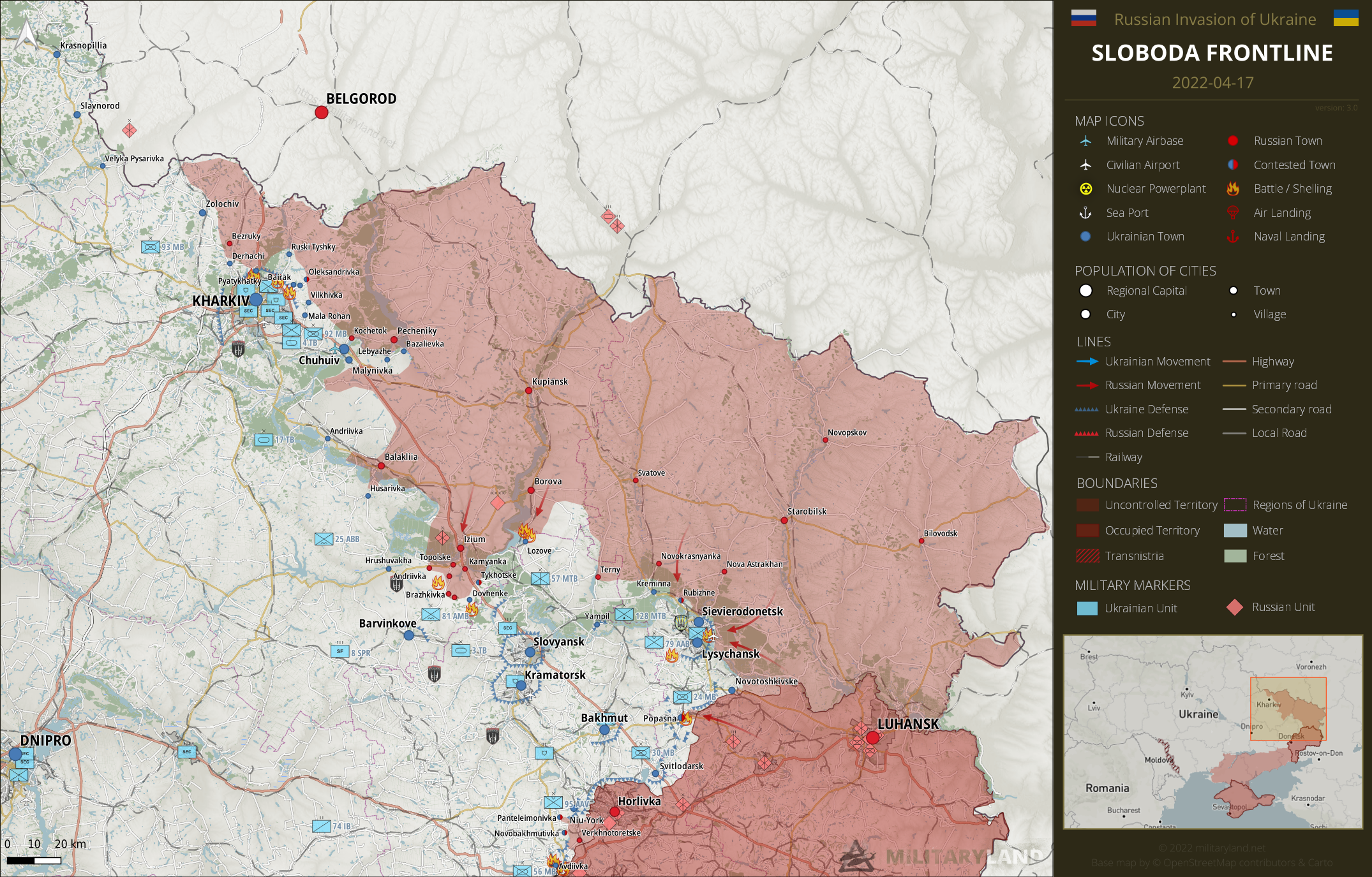 Ukrainian forces have reportedly liberated Bairak, Kutuzivka (partly) in the north-east and Lebyazhe, Bazalievka in the east. It’s currently unclear how they managed to get there, most likely through the firing range of 92d Mechanized Brigade.

According to locals, Pecheniky remains in Russian hands. The situation in Kochetok remains unclear.

Russian troops have advanced south of Borova and reached the outskirts of Lozove. Ukrainian forces successfully repelled the attack on the village, but heavy battles have been ragging in the vicinity.

Ukrainian troops reportedly counter-attacked near Kreminna and pushed Russian forces a few kilometers north-east. However, there is currently not enough information to confirm it. 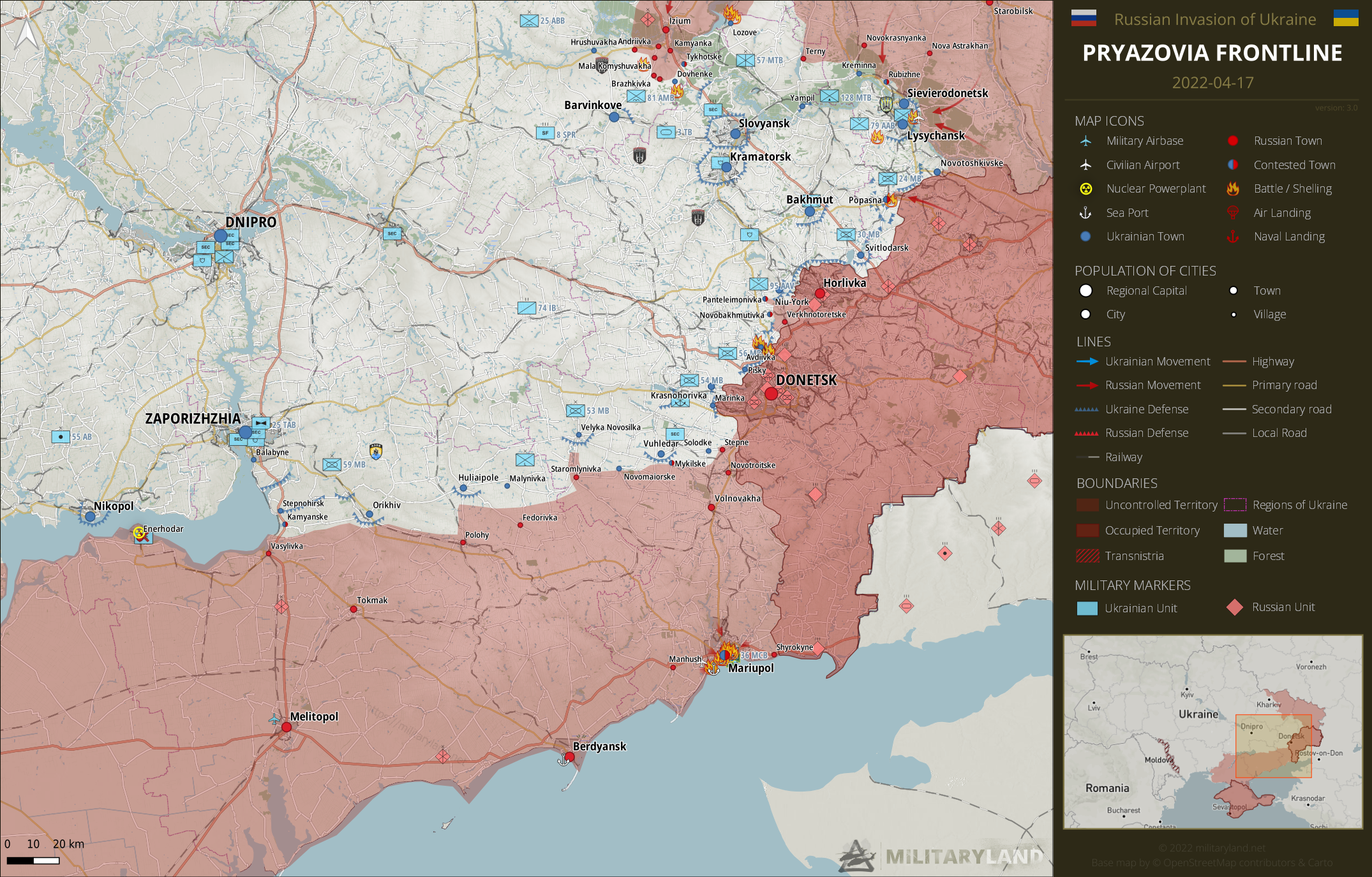 Russian troops reportedly launched an offensive in the direction of Malynivka. Ukrainian troops repelled all the attacks, but the situation remains tense. 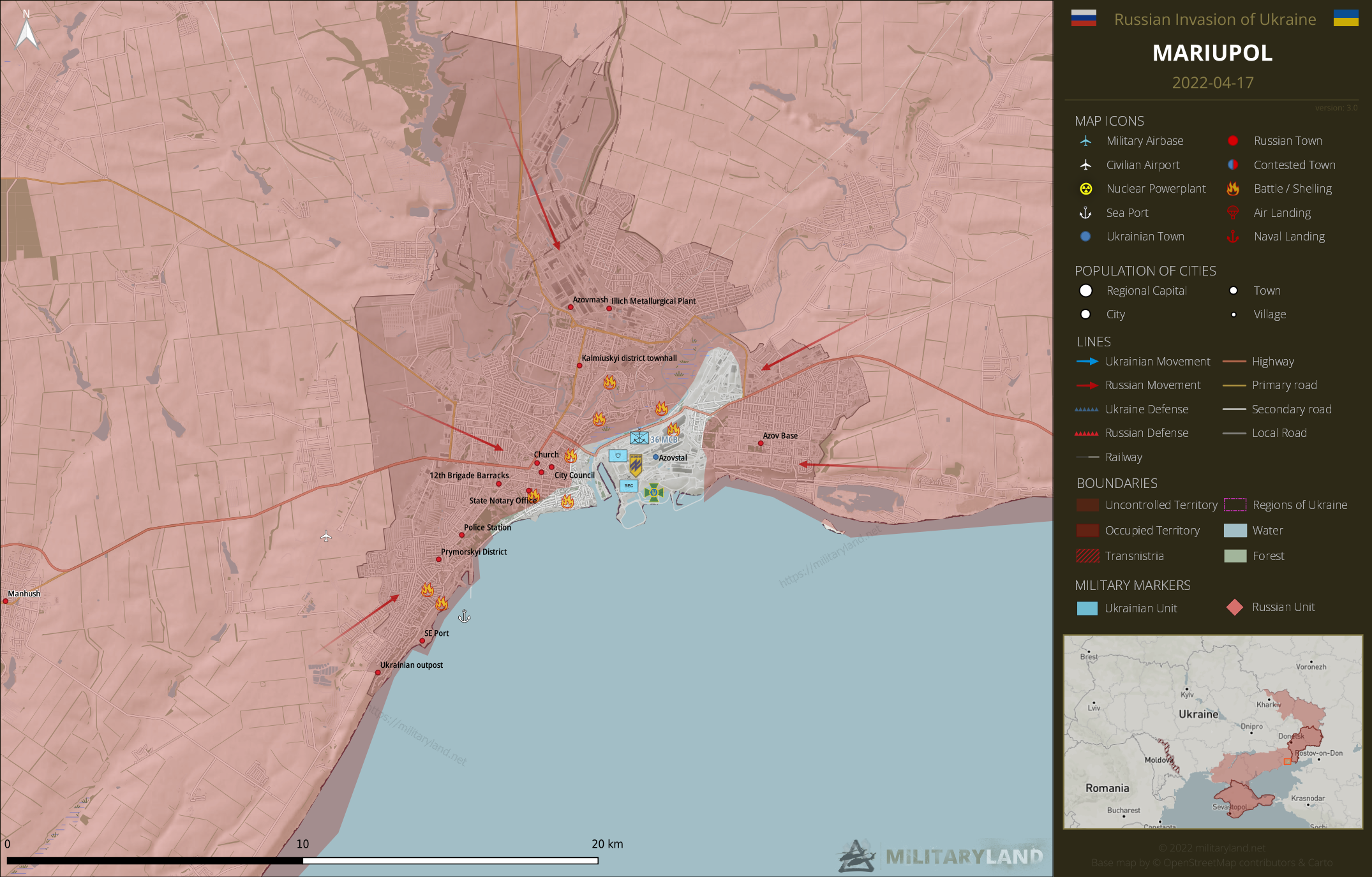 Based on the available footage and reports, it’s safe to say the Prymorskyi District and the harbor area has been captured by Russian forces. The remaining Ukrainian forces have withdrawn towards Azovstal Plant. 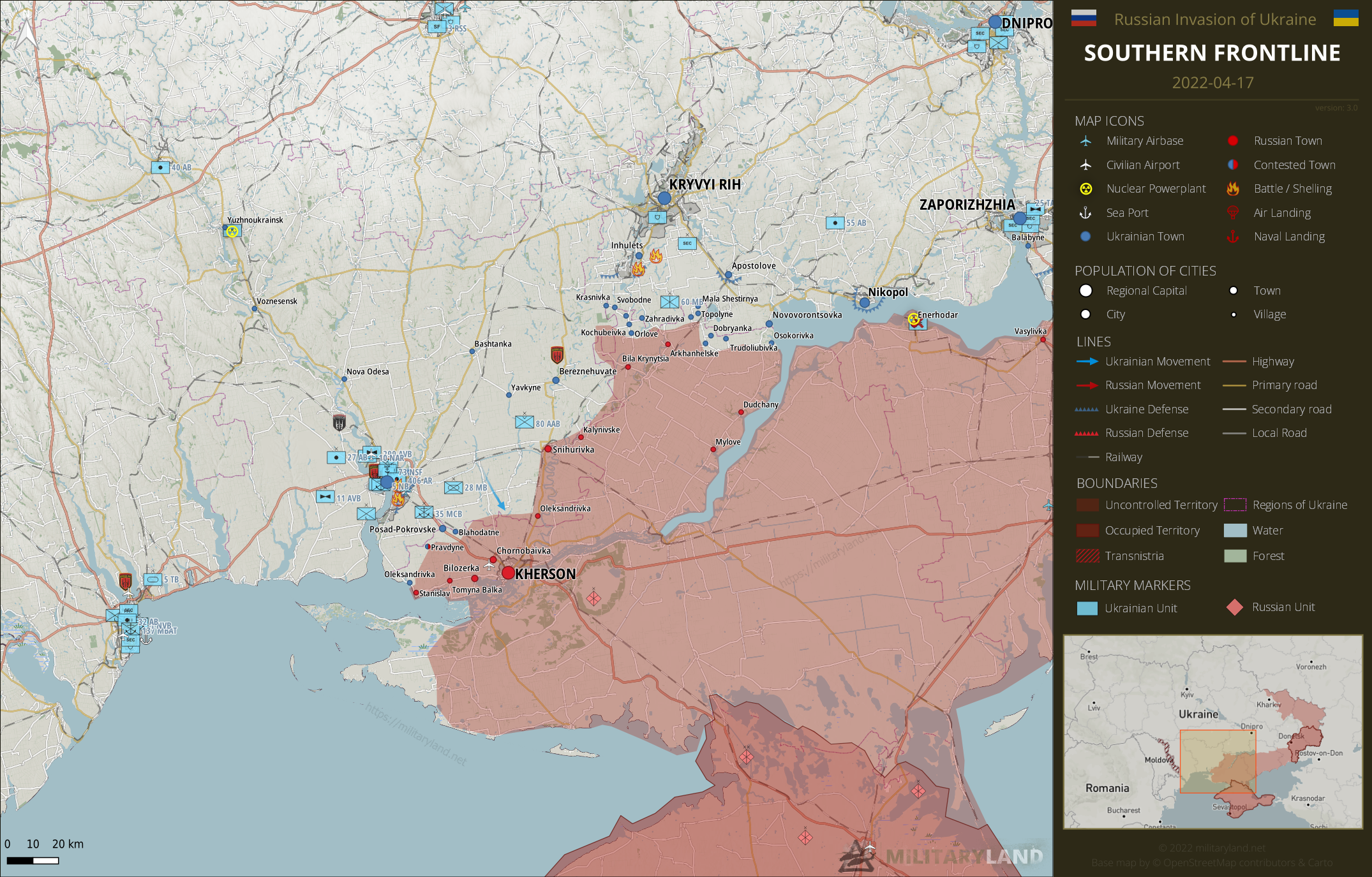 We’re still waiting on the results of the Ukrainian offensive towards Kherson. Meanwhile, Russian forces shelled the outskirts of Kryvyi Rih from Kherson Oblast. 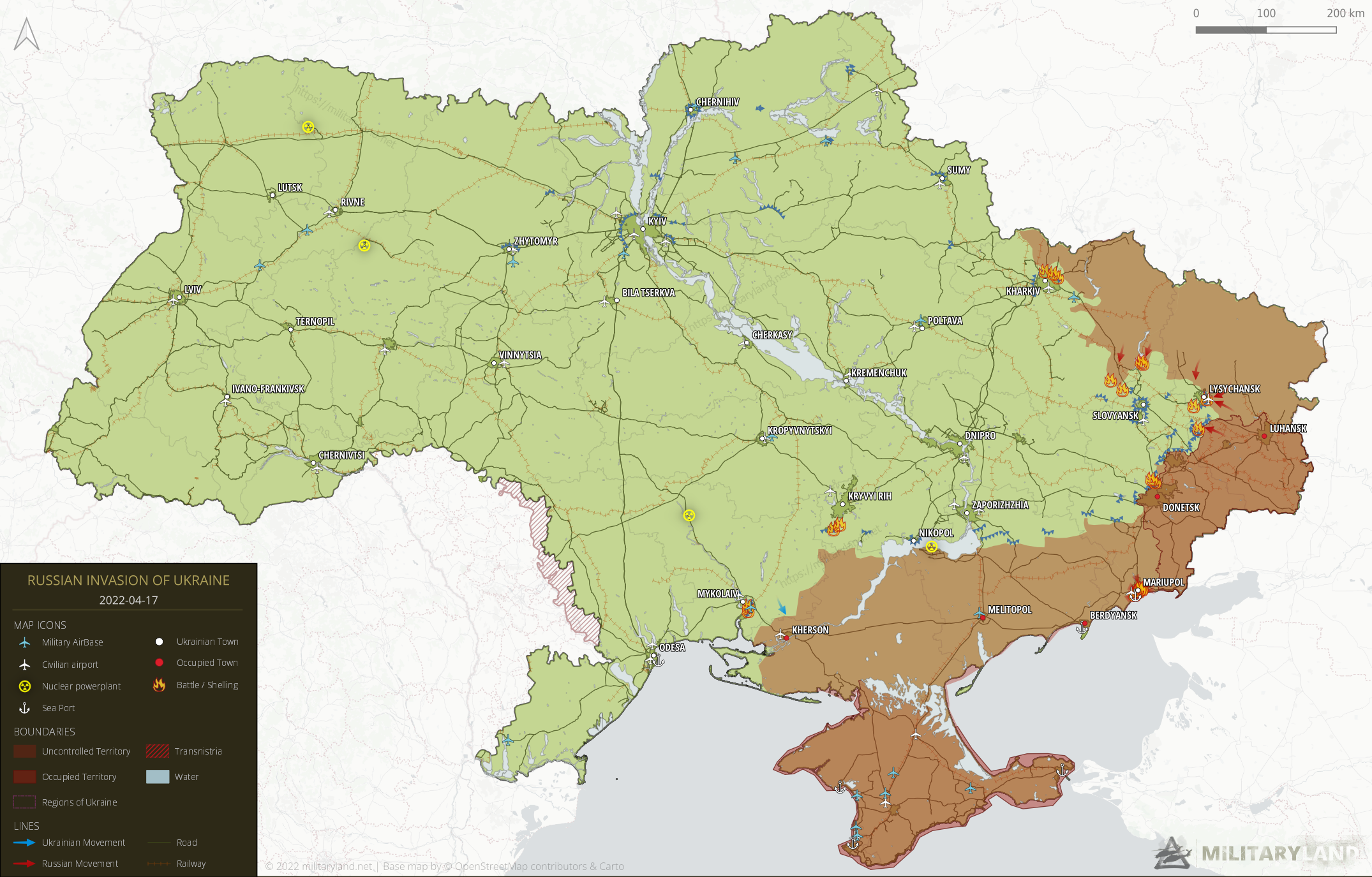 Once the Ukrainian military announced they had no plans to relieve Mariupal they should have ordered the troops to lay down their arms. In places like Stalingrad fighting for every inch of the city fit into both armies plans and made sense. This is just slaughter for its own sake.

No. This is strategic immobilization and wear and tear of all the Russian troops massed in the city.

Then the Ukrainian government has no business complaining about the destruction of the city. More broadly I’ve become very suspicious of the motives behind the government not evacuating any civilians before the war.

please use jpg format on pics

pgn is so heavy

Jpeg compression harms the final quality of images. I decided to prioritize quality over the size.

You’re right, JPEG is not suitable for maps.

I’m a bit confused about Mariupol: the text seems to indicate all Ukrainian forces have withdrawn to Azovstal (which is consistent with other sources), yet the map still shows a portion of the city on the west bank of the Kalmius under Ukrainian control. How come? Are there scattered pockets of Ukrainian troops known to remain in this area or something?

Perhaps he shades only the areas he receives confirmation of troop movement. I’ve noticed a few times the Mariupol maps are lagging a day or two based on footage of pro-Russian reporters on the scene like Patrick Lancaster or Murad Gazdiev. It’s hard to get verification from the Ukrainian side as they are surroundered and only a few journalists are allowed into the city from what I can tell.

There were still some indications that there might be some troops left in those areas. I’ve decided to wait a day to get proper confirmation.

If the Azov footage released today is from today/yesterday, then the map is correct because the footage was geolocated exactly on the border in the south.

I don’t know with what tool you create the maps, but have you considered SVG as a format? It is supported by all major browsers since quite a while and could be perfect. Small filesize (if done right) and clear text.

(But probably no need to spend hours over this, png works as it is)

Some maps don’t open. Also the little window that normally zoomed in when moused over is not working. Maybe just me on my browser, but wanted to let you know.

Thank you for the updates.

I fixed it, sorry.

Thanks for your job!

Jerome
Author
Reply to  Whatever

It should be fixed now.