Russian troops have advanced deeper into Mariupol and started to dig trenches in the vicinity of Kherson. The situation on other frontlines remains without change. 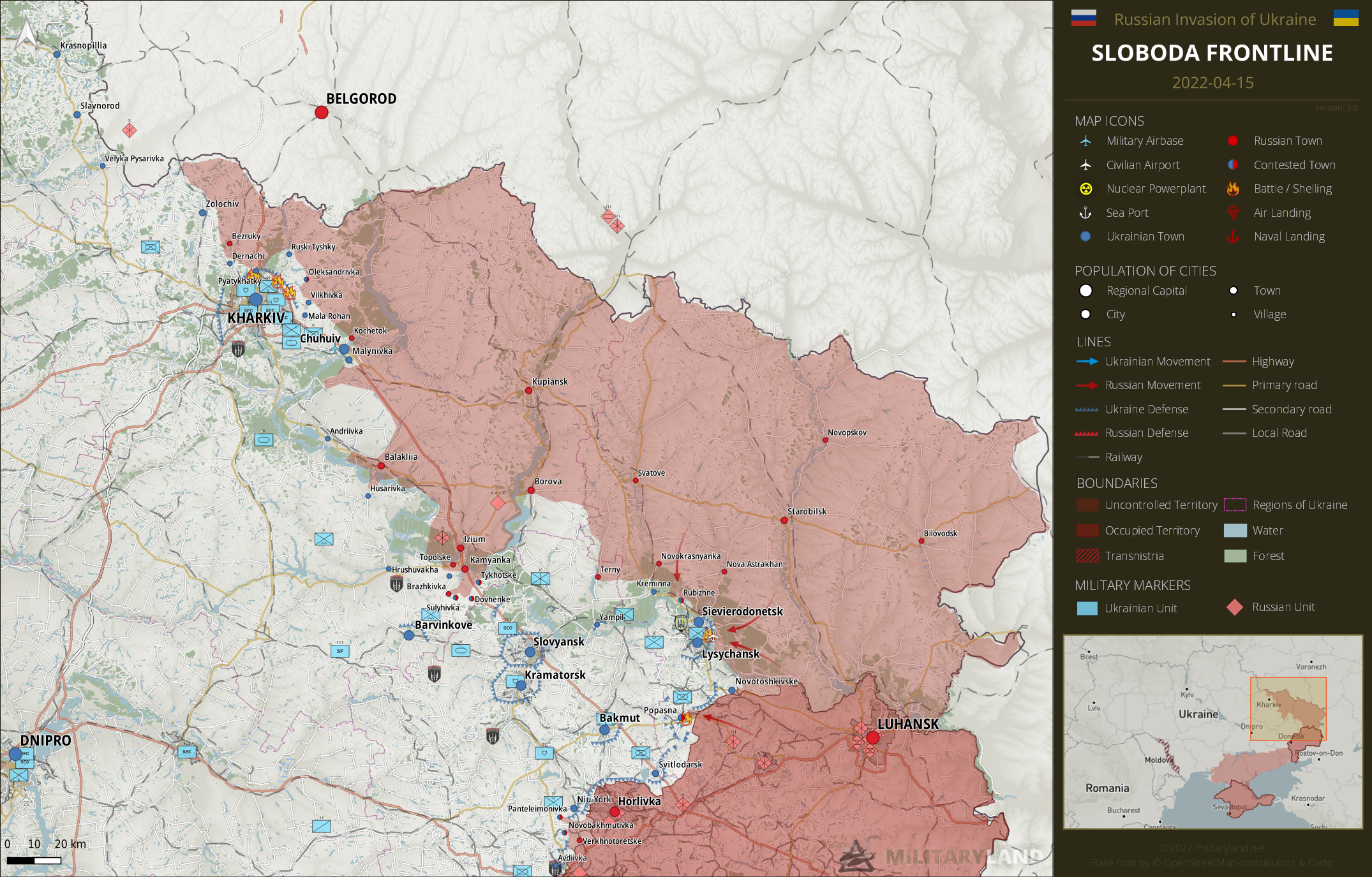 Russian troops shelled the outskirts of Kharkiv again. The situation in the vicinity of Izium was relatively quiet on Friday, compared with the previous days.

Fighting was reported from Sievierodonetsk and Popasna. 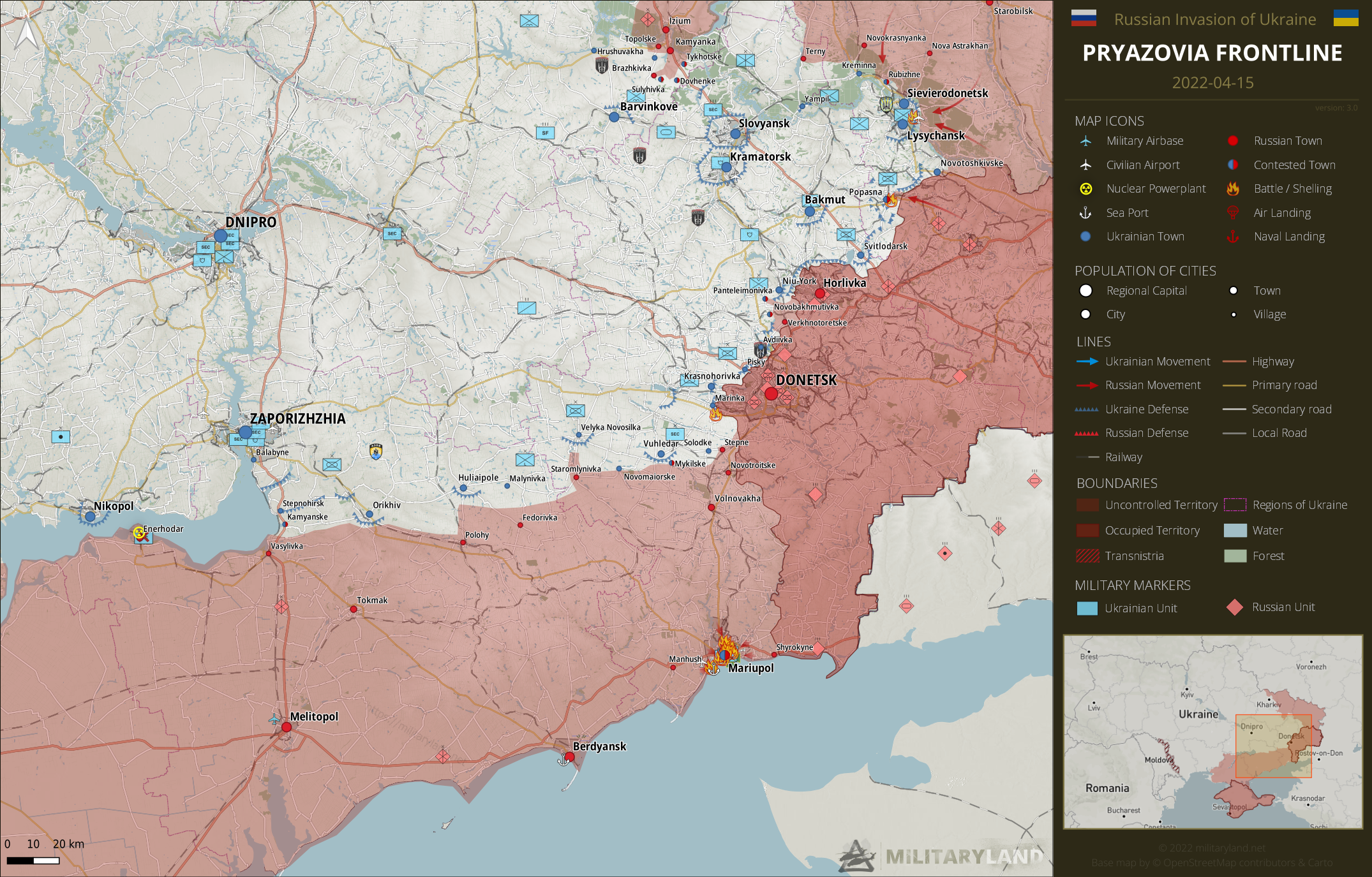 Russian troops attempted to break through Ukrainian lines in Marinka. They didn’t succeed. 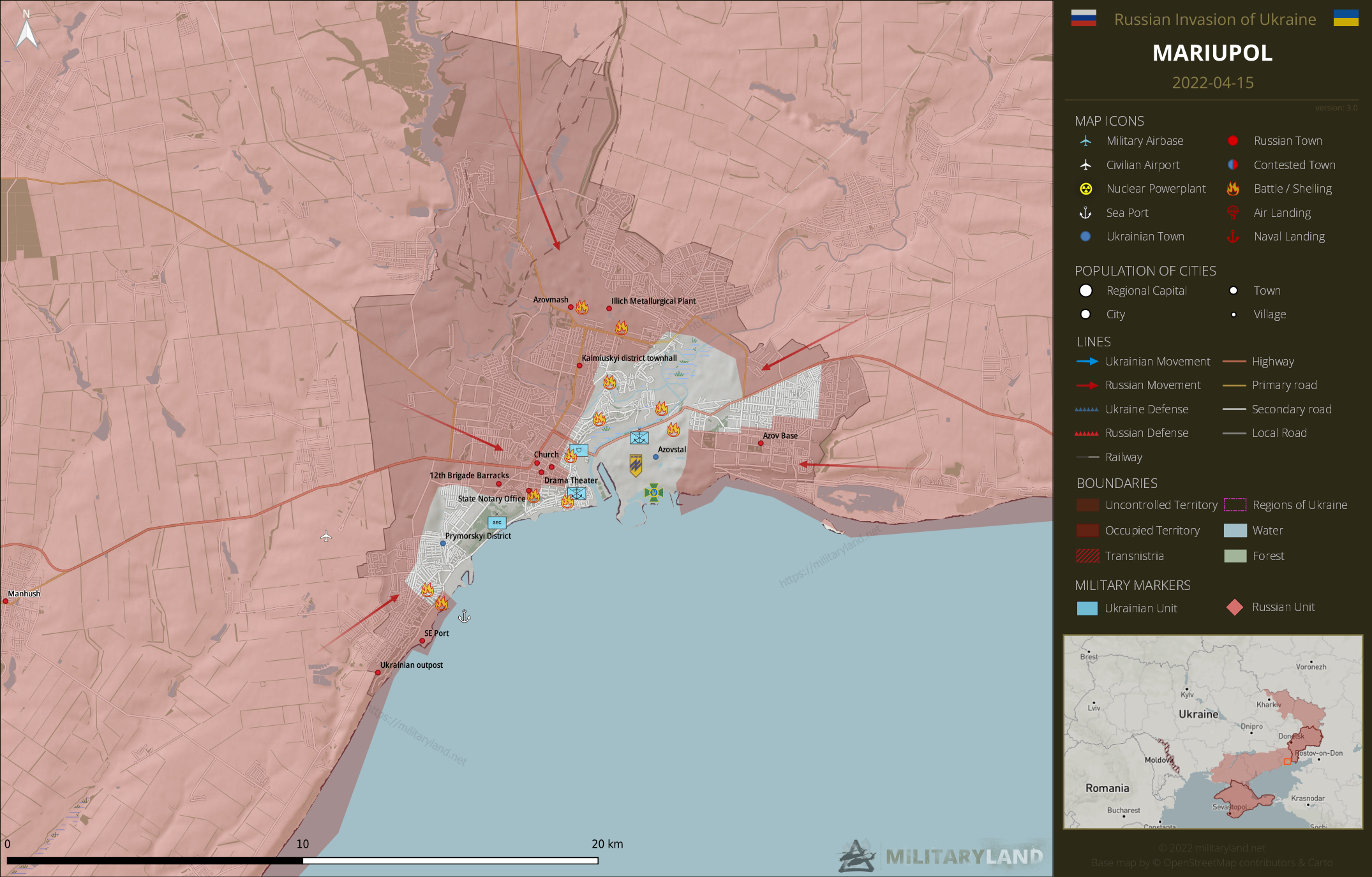 Russian army captured the base of 12th Operation Brigade (National Guard) in the western part of Mariupol. The base was abandoned some time ago. The Illich Metallurgical Plant, from where 36th Marines Brigade withdrew a few days ago, has been captured by the advancing Russian troops from the north. 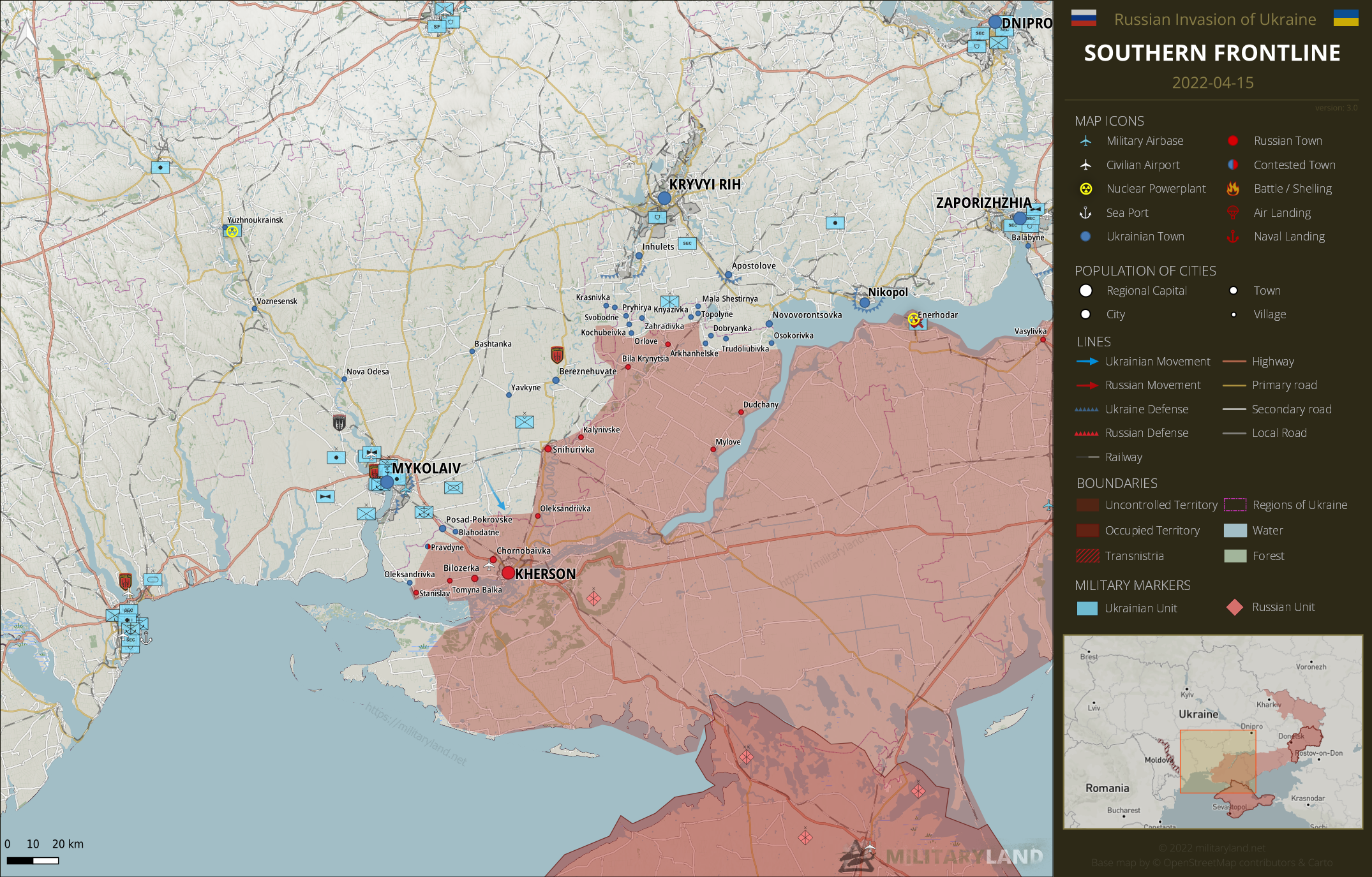 Russian troops have been reportedly spotted digging trenches and defensive positions around Kherson amid the threat of possible Ukrainian counter-attack towards the city. 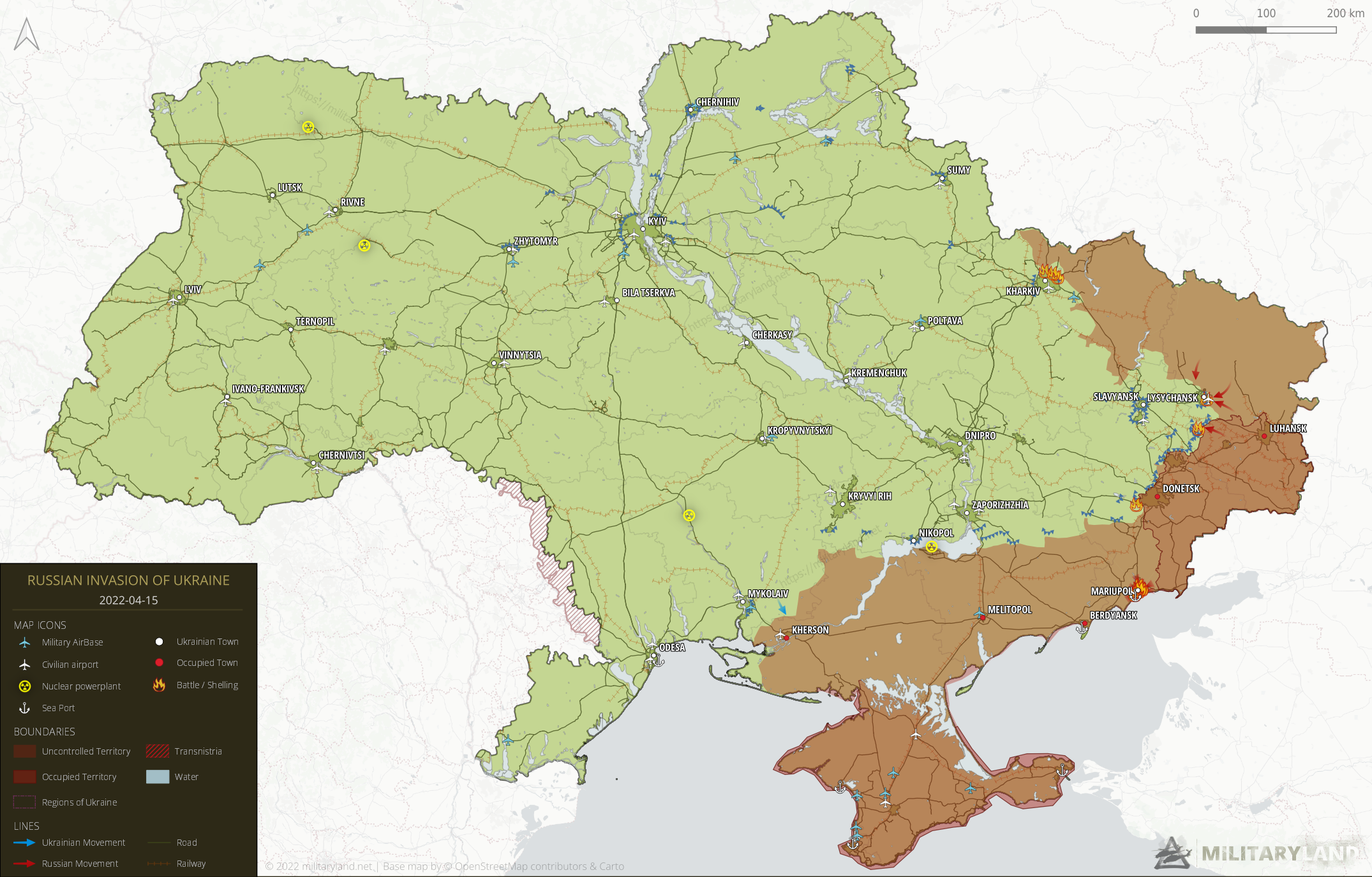 Many thanks for your great maps. Your map of Mariupol concerning the SW (harbor) pocket controlled by Ukrainian forces is however out of date. Russian forces have been filmed relaxing on the beach at position 47.071774, 37.519857 It is therefore unclear how much there is left of the SW pocket. I have published Geo-positioning from Mariupol on my Twitter account: https://twitter.com/Fireblade577

Delay to the invasion?

The Moskva may even cause Russia to delay their offence by a few days. It’s definitely a morale blow whichever way you look at it. Im surprised they parked it so close off the coast of Odessa in range of the Neptune rockets, considering Russia doesn’t have it’s forces on the ground in Odessa at the moment that would have stopped the launcher setting up. They may have delayed the invasion to do it after… Read more »

As for UA forces deployment, 503-rd marines battalion is near Donetsk, not in Mariupol

It may be seen here
https://www.youtube.com/watch?v=Ue61w7HctLk (for example time 1:00)

Thanks, I’ll correct it.

And these Neptun Missiles (https://en.wikipedia.org/wiki/R-360_Neptune) have a range of 300km. Ennough to threaten the port of Sewastopol, …

Regardless, Mariupol and Berdyansk cannot be used for resuply by sea as the current version of the Neptun can reach both ports well from within Ukrainian controlled teritory.

yes, but they need to detect them first… so i would expect them using UAVs to search for russian ships…

You can probably expect their ships to keep their distance from Ukrainian held coastlines for awhile.

“Russia Hits Kyiv Missile Factory After Moskva Flagship Sinks” “Russia’s Black Sea flagship was hit by 2 Ukrainian missiles, a U.S. official says.” I have seen on russian TV about this attacked, people calling russia to declare war to Ukraine on TV (I won’t comment that). the loss of this ship seems to be a big political deal for russia. And a big symbol of a victory for Ukraine. Today I read that this ship… Read more »

The remaining Russian ships in the Black sea still have some anti-air capabilities, but nothing compared to the firepower and range that the Moskva had. For example, the Moskva had S-300 anti-air missiles with range about 90km, but the systems on the other ships are only usable up to around 40km or so. Losing the Moskva did not make the rest of the fleet completely vulnerable, but it is now much weaker.

I read that too. thx for the add.

it was the only ship with that capability in Black Sea.. they have other two, one in North Sea fleet and other in Pacific fleet..

You right I should have precised in the black sea. Thx

btw, there is a theory going, that bad weather and tall waves might have caused radar systems on Moskva to not detect the incoming missiles till last moment… Moskva was equipped with relatively obsolete fire control radars that are not as efficient to detect object against rough sea as more modern AESA radars..

It is a fairly old ship and I son’t think it had ever been refurbished fully since it was layed down in the 70’s. The Black Sea fleet is still deadly even without it they have very dangerous submarines even unmanned ones like poseidon that are nuclear-powered and can dive deeper than manned submarines. These subs won’t affect Ukraine so much, theyre designed to sneak up on US carrier groups in the sea.

I read that too. thx

Yes, combined with the new anti-ship missiles Ukraine is getting, suffering a drop in defense power is what Russia does not need right now. They might be getting steamrolled in the Black sea as well… maybe Ukrainian fishermen should be getting their trawlers ready so they can haul some frigates like farmers did with the tractors?