Russian officials confirmed the loss of the flagship of Russian Black Sea Fleet, Project 1164 Moskva. The situation on the ground remains unchanged, but one important correction was made regarding the situation near Slovyansk. 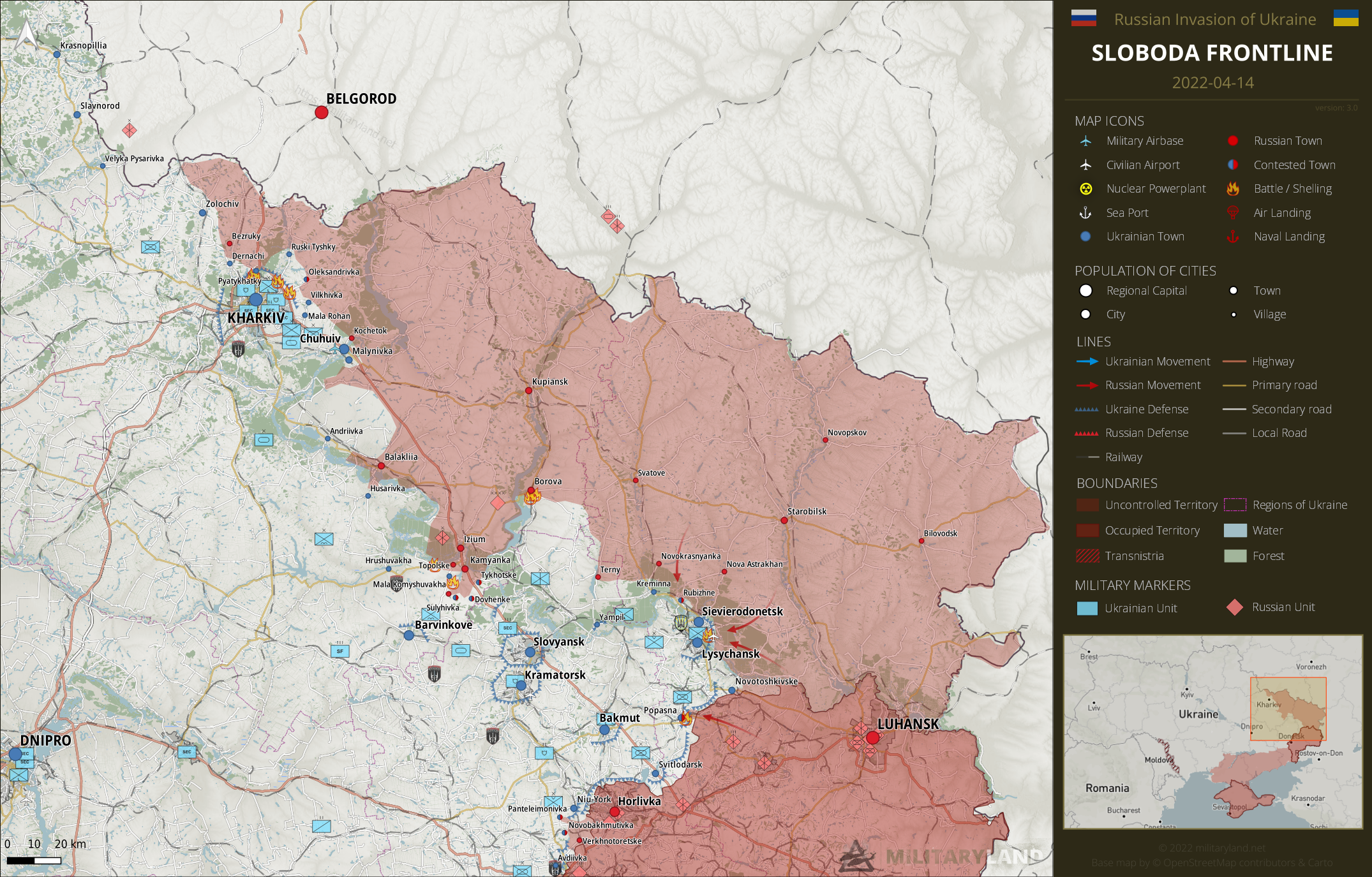 Ukrainian reinforcements continue to move to the area. Russia, despite its readiness, haven’t launched its offensive operation yet.

Correction: Kharkiv regional council reported that Russian forces captured most of Borova today. The area was wrongly marked as Uncontrolled Territory. Ukrainian forces reported clashes in the vicinity a few weeks back, but I assumed they’ve withdrawn when Russian troops reached Izium. Ukrainian troops didn’t conduct a counter-offensive as some claims.

There was no change on the ground in Luhansk Oblast. Fighting have continued in the vicinity of Lysychansk, Sievierodonetsk and in Popasna. 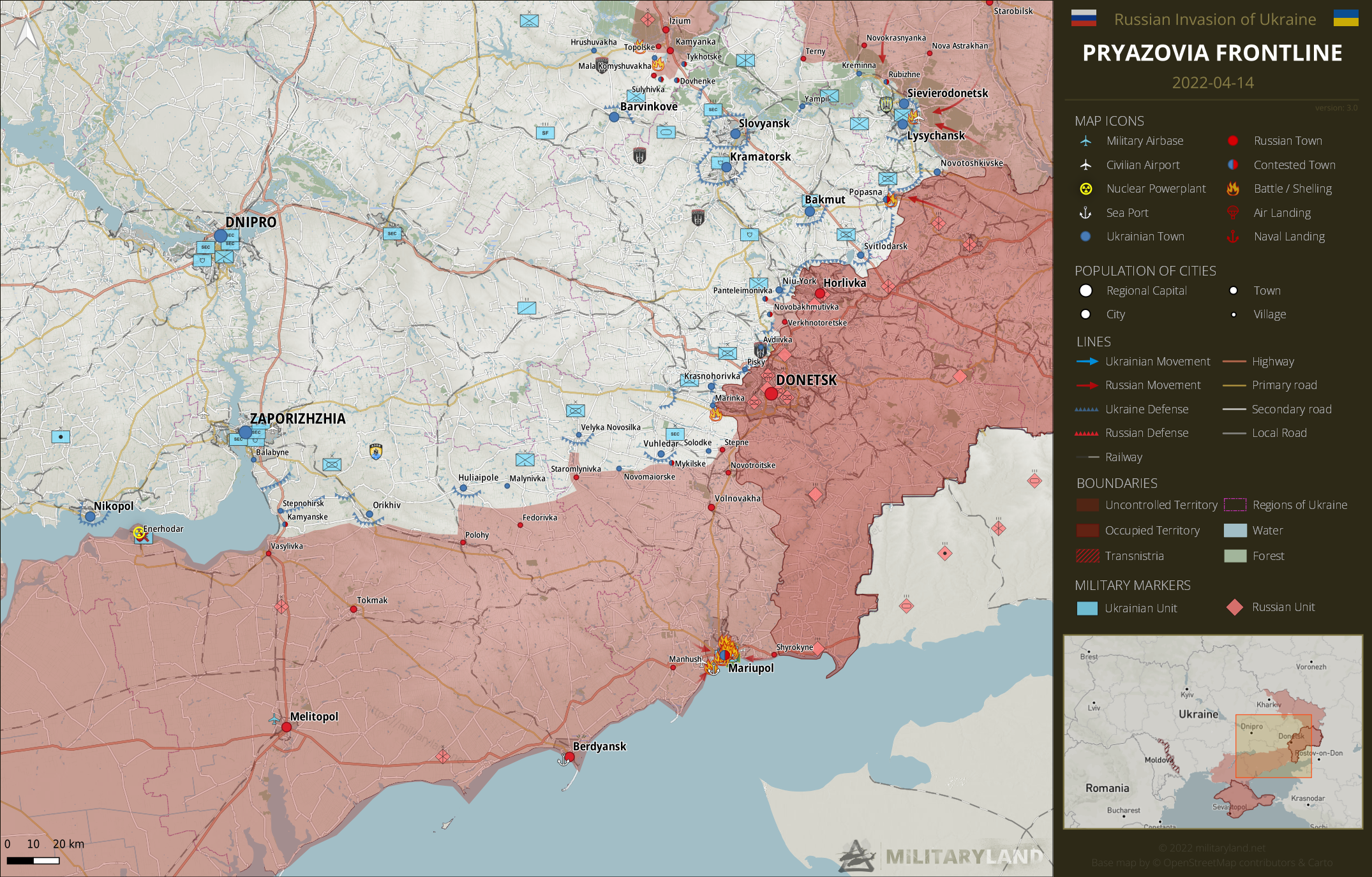 Russian troops have overrun Ukrainian checkpoint between Marinka and Oleksandrivka. 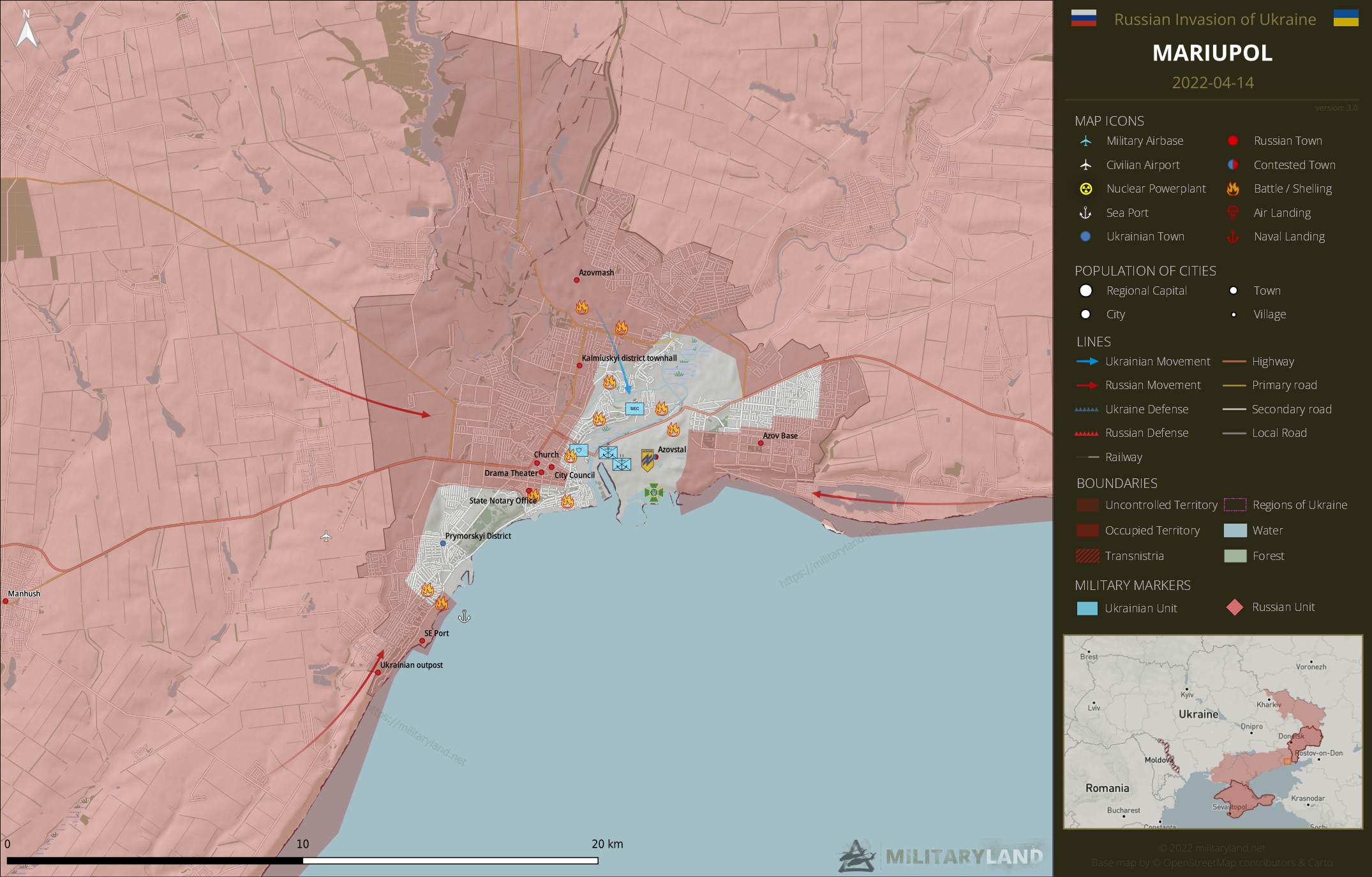 The area under Ukrainian control is shrinking. Heavy battles were reported from the harbor area and the vicinity of Azovstal plant, where Ukrainian forces plan to make their last stand. Ukrainian officials also confirmed a dozen of Ukrainian marines from 36th Marines Brigade surrendered to Russian forces near Azovmash. It’s not a thousand, as Russian propaganda claimed before. 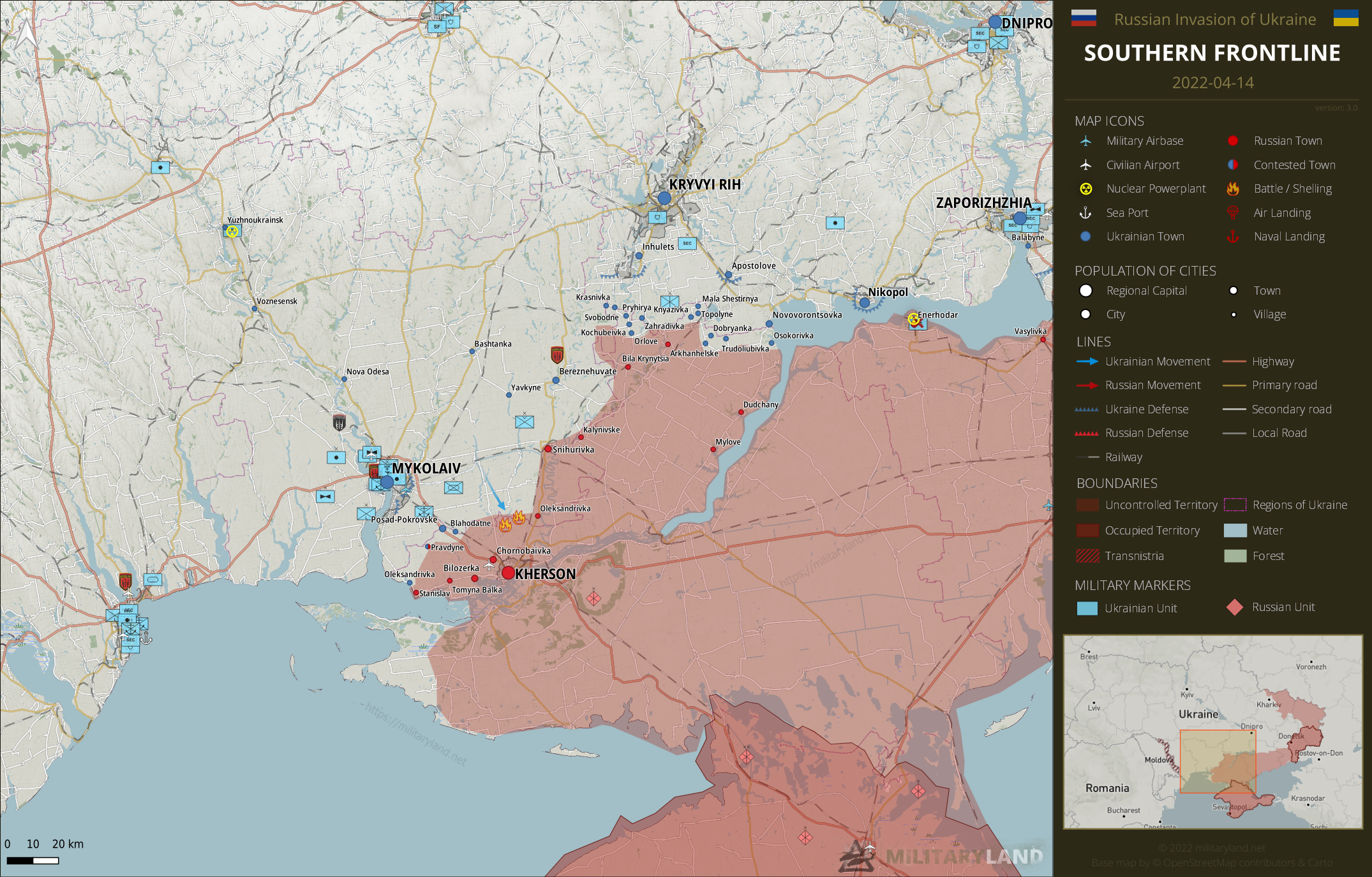 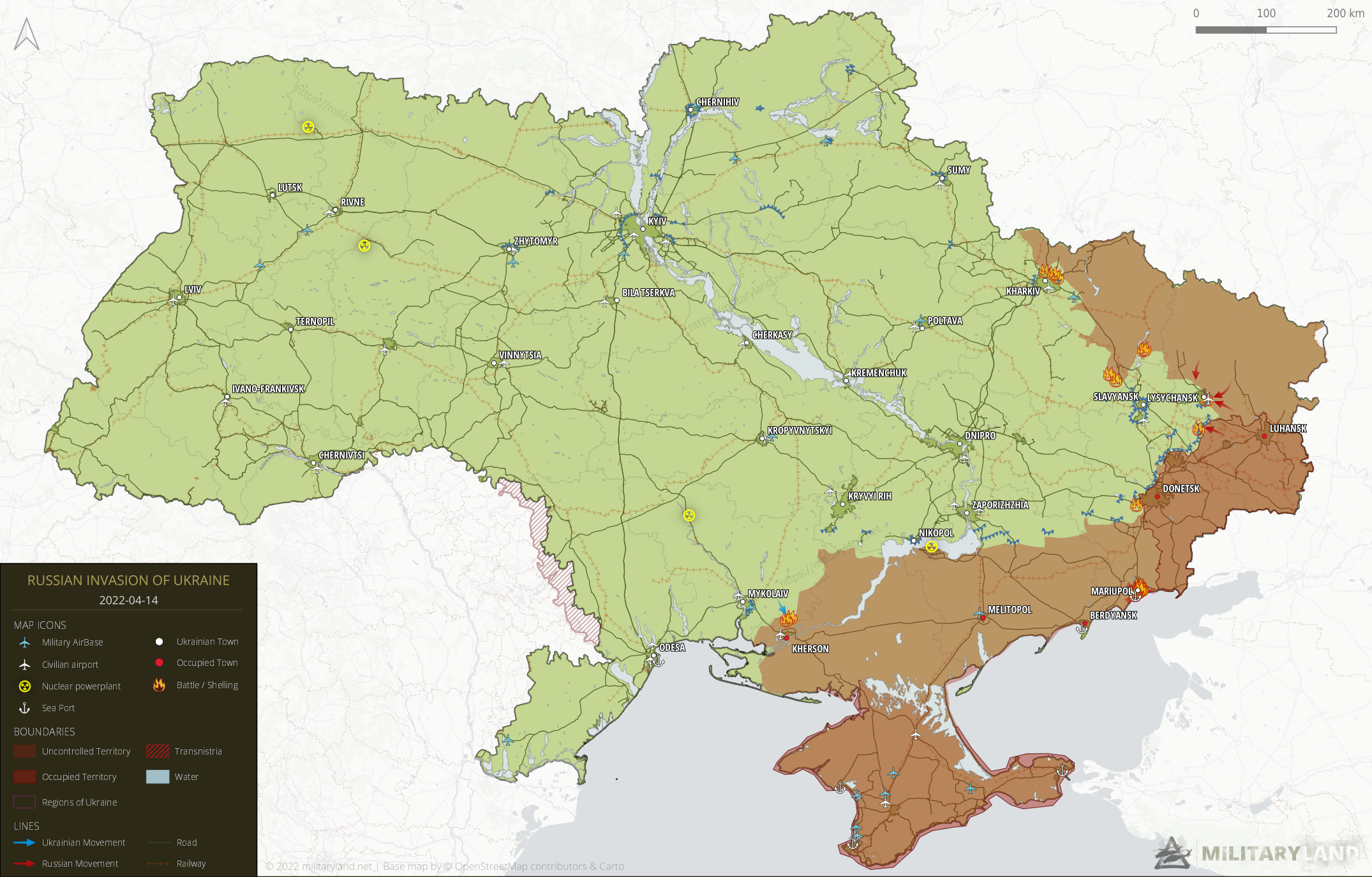 What do the Russians expect? They keep sending the defenders of Mariupol more food in the form of Russian soldiers.
A nearly unlimited supply of protein. How can they expect to win against the defenders in such a way? They must be naïve to expect surrender, the beast barracks will never surrender to Russians with so much meat on the plate.
I am actually serious, there is no logic and they keep sending protein.

they are doing worse for 50 days, yet they blame Ukrainians for somewhat returning the favor??? Anyway.. this is not intended response for outside world, this is intended for Russians, who were made to believe there is no war, its just “special operation” and russians are just clearing areas and doing police work.. its kinda funny but their own propaganda is working against them…