The summary of the fifth day of Russian invasion to Ukraine.

The situation continues to be relatively stable. Russian forces pushed in Donbas and captured several small settlements. Russian tactics of spearheading deep into Ukraine seems to be failing, and we could already see the change of tactics today. 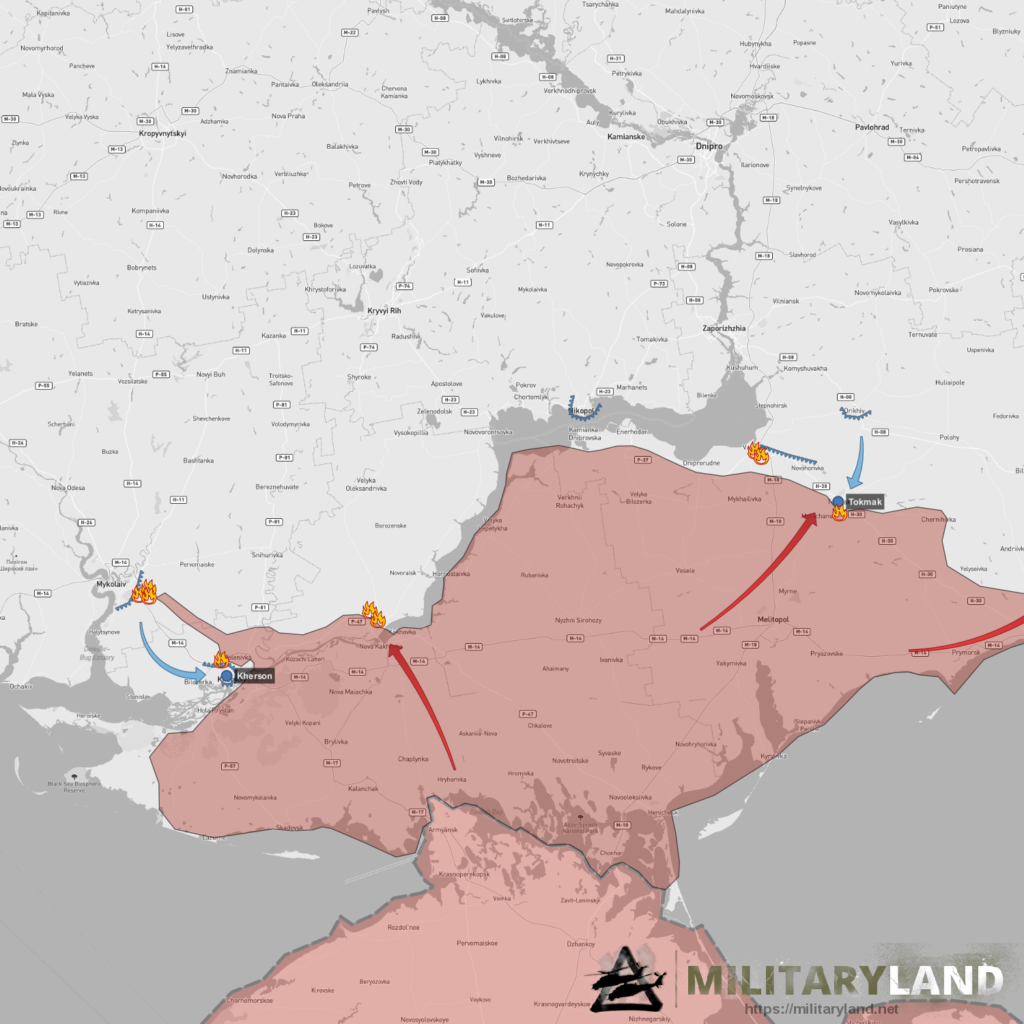 A small group of Russian troops entered Kherson in the morning, but were either destroyed or left without a fight. Large amount of Ukrainian equipment and troops were seen moving on the streets of Kherson during the afternoon.

Ukrainian forces counter-attacked towards Tomtak in the morning and pushed enemy forces out of the town. Russian forces approached a checkpoint of Ukrainian self-defense force near Enerhodar and had been waved off. 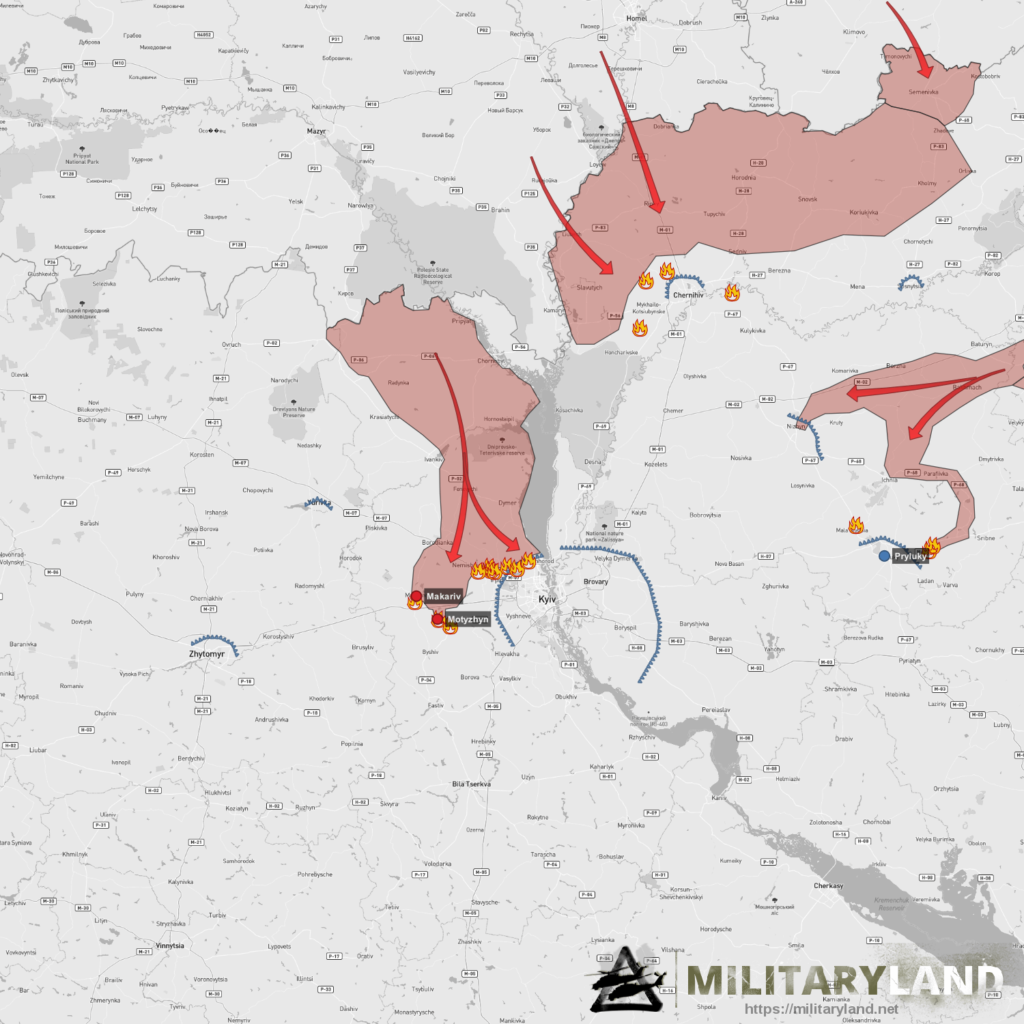 Heavy fighting continued in the area of Hostomel. The enemy forces reinforced the southern spearheading force and captured Makariv.

There is a few kilometers long column of Russian equipment and troops heading towards Kyiv from Chernobyl area. The column reached Hostomel today, and Kyiv awaits a possibly huge attack from the north in upcoming hours.

A group of saboteurs tried to enter Zhuliany airport area in the south-eastern part of Kyiv. Ukrainian troops exposed and arrested the group.

Russian troops continue to assault Ukrainian defense positions in Chernihiv, but Ukrainian lines are holding. Chernihiv was heavy shelled by Russian artillery during the day, signaling the change of tactics.

No change has been reported from this area. Ukrainian Forces are holding out at Pryluky and nearby area. 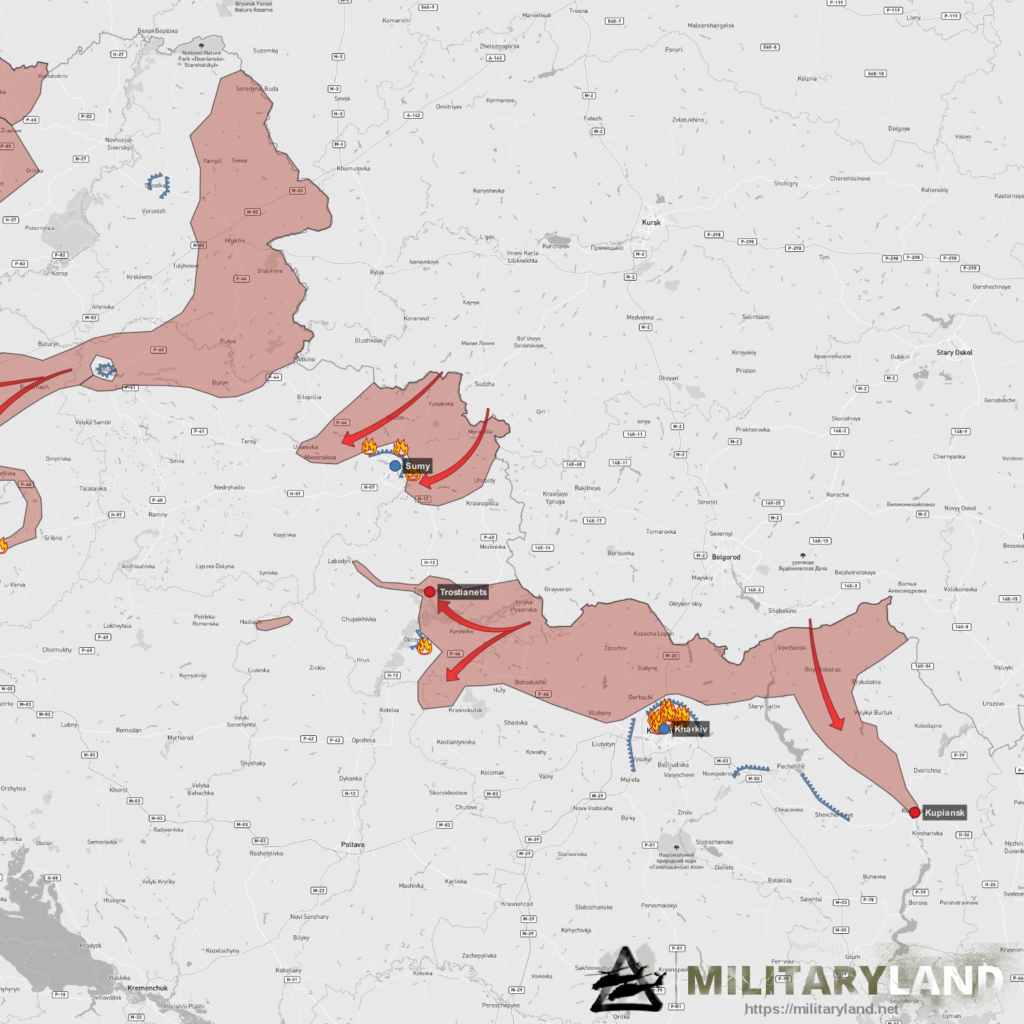 The frontline in the area is stagnating. Ukrainian forces reported the use Bayraktar TB2 and destroying a Russian column near Sumy. The defense lines of Sumy are holding, the regional capital remains in Ukrainian hands.

Kharkiv saw heavy shelling during the day, which resulted in dozens of killed civilians. The use of artillery against large cities is signaling the change of tactics.

To the east, Russian spearheaded west, captured Trostianets and reached the edge of Lebedyn. Ukrainian troops claim they destroyed an enemy convoy near Lebedyn in the evening, but so far we haven’t seen any proof of that.

Russian artillery destroyed Ukrainian base of 91st Support Regiment in Okhtyrka. The town itself remains under Ukrainian control.

There is a Russian tank spearhead element somewhere near Hadiach and Vepryk, consisting mainly of T-80Us. The exact location is unknown, but photos on social media show several abandoned tanks as a result of no fuel. 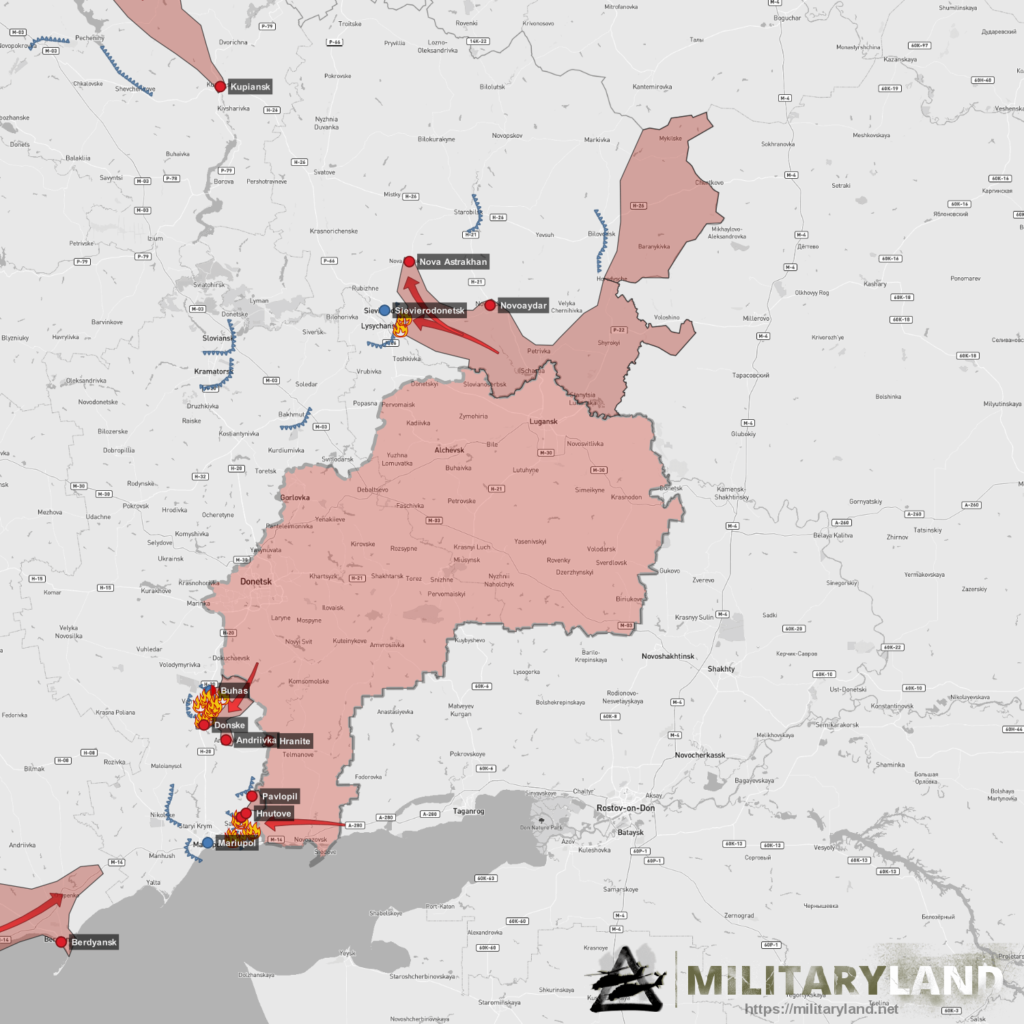 Russian troops advanced north and captured Novoaydar and Nova Astrakhan. Ukrainian forces are holding the line at Sievierodonetsk and Strobilsk.

The enemy reach the edge of Buhas, but didn’t gain full control of the town.

Russian forces broke Ukrainian lines near Pavlopil and captured the town soon after. The enemy pushed towards Mariupol and captured Hnutove and nearby Talakivka. Ukraine lost two T-80BVs, one BTR-80 and T-64BV during the defense of the area.

The Ukrainian delegation travelled to Belarus for talks with their Russian counterpart. The negotiations didn’t bring anything new.

The route on the west of the Dnieper from Chernobyl -> Kyiv is blocked for the Russian army due to the blowing up of the Teteriv River bridge at Ivankiv. It also cannot cross the Dnieper to the east side and make its way south to Kyiv because Ukraine also blew up the Kamaryn-Slavutich checkpoint bridge. Russia must repair these blown bridges or create pontoon bridges to continue good progress on the North front. WHERE… Read more »

Thank you for your great work! These news are quite more detailed and objective than most of other. Still sending prayers that all those people can be together with their families soon ??✌?

Thank you for these updates. They have given me relief and worry at the same time. Regardless of the outcome, there will be many tears to shed. All to say, this is quality journalism not replicated anywhere else, and the attention to detail and bias is done with extraordinary precision. This is a heartfelt service to a humanity that is hungry for answers and heartbroken at their revelation.