Ukrainian intelligence reported that Russian army has moved all necessary means and is ready to launch an offensive in Donbas. The operation seems to be imminent. 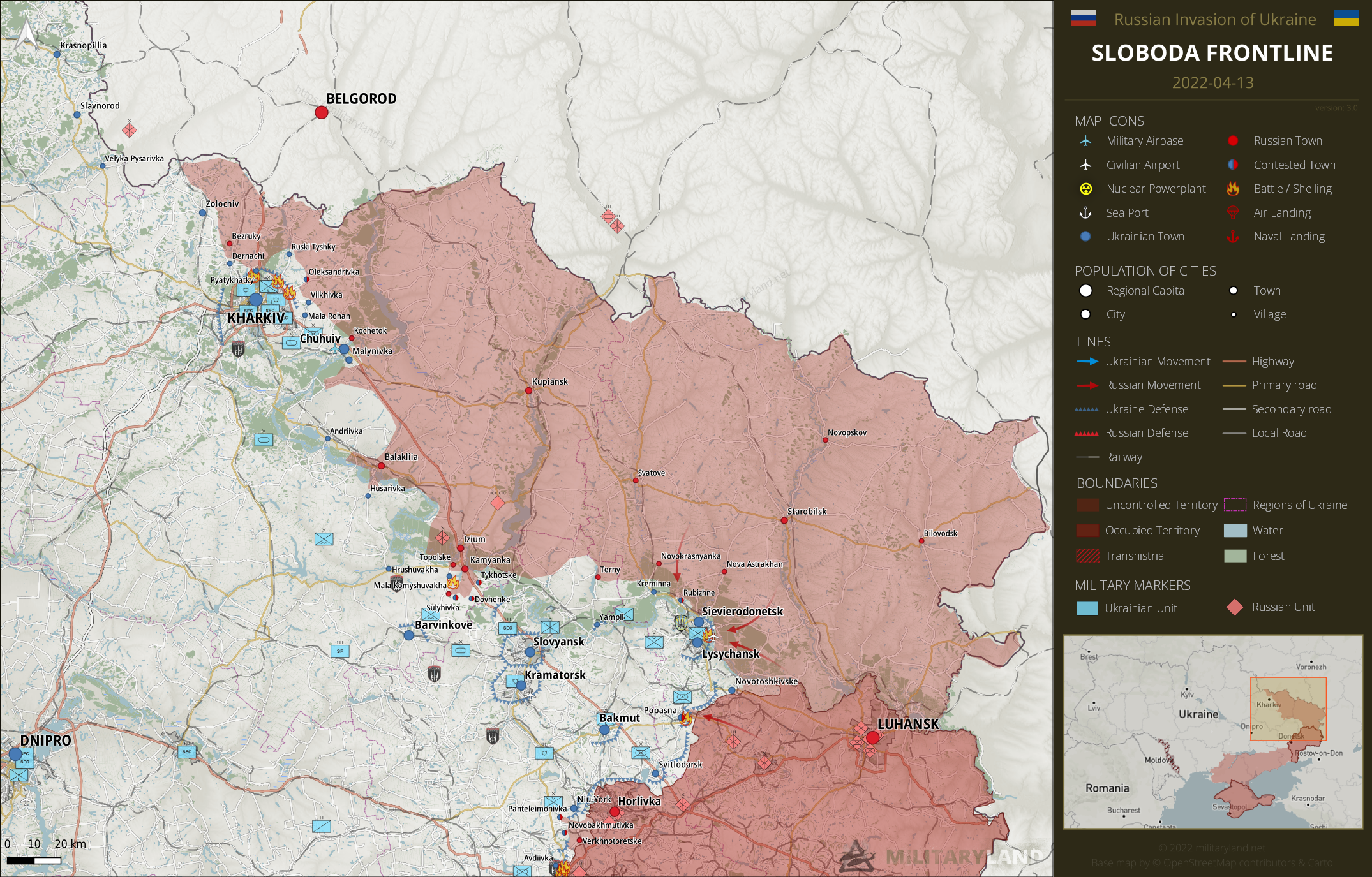 The shelling of Kharkiv has continued today as well.

There was no change on the ground in Luhansk Oblast. 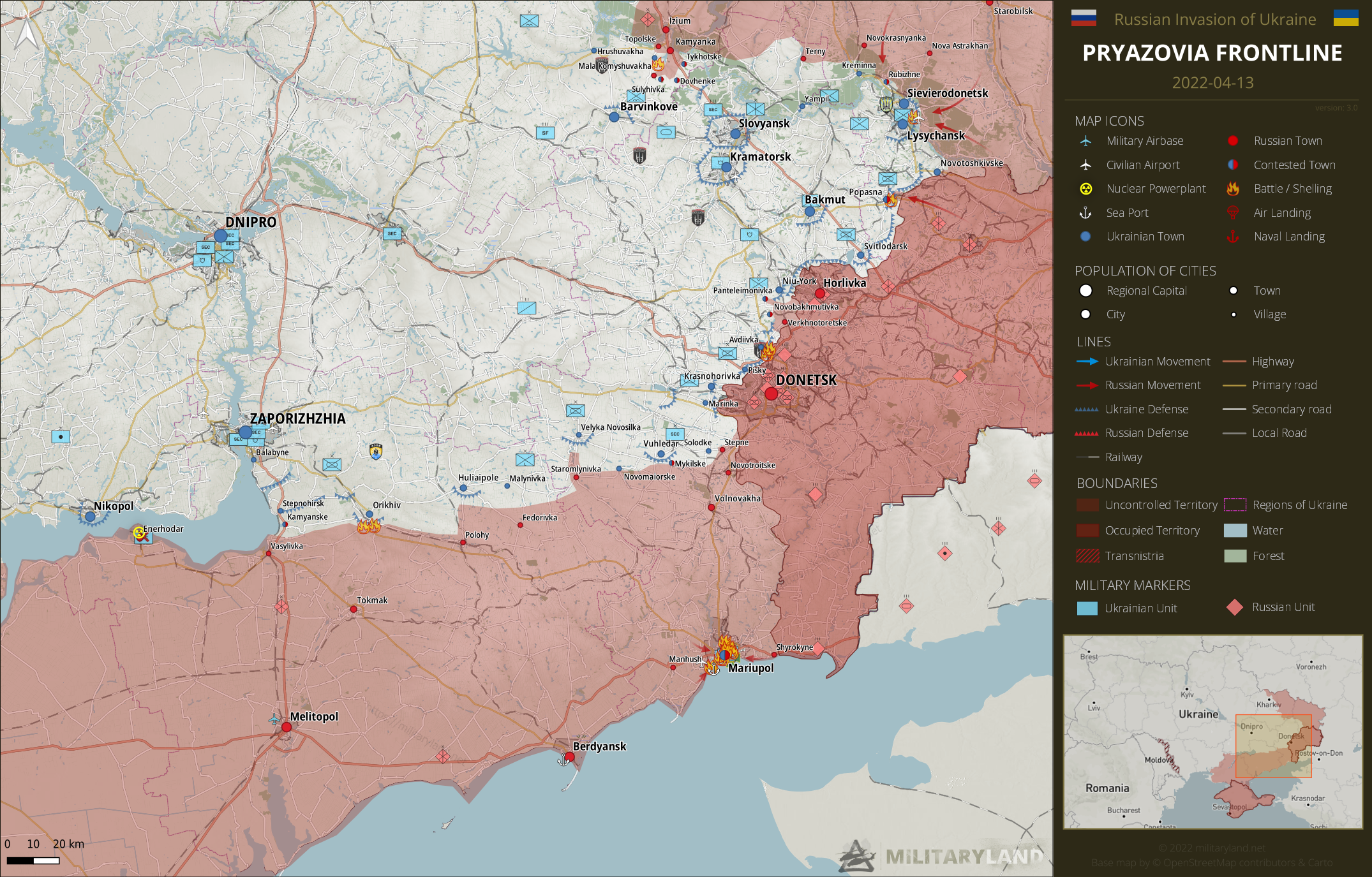 The hottest point in Donetsk Oblast is Avdiivka. Russian army have continued to shell the town and launched several small-scale attacks in an attempt to break through Ukrainian lines. All attempts were unsuccessful. 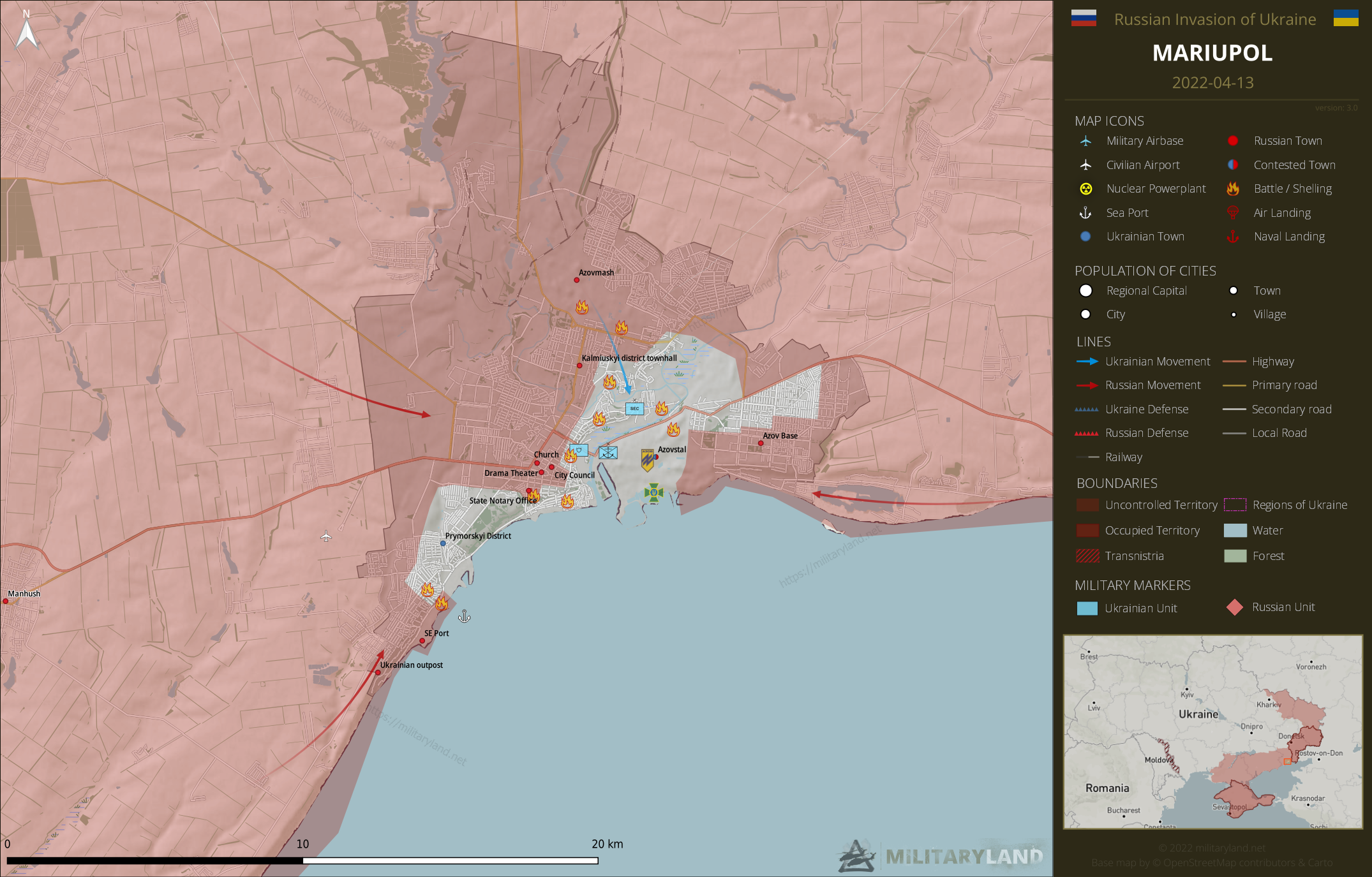 The breakthrough of Ukrainian 36th Marines Brigade from Azovmash towards Azovstal was confirmed today, as the commanders of Azov and 36th Marines Brigade published a joint video statement. However, at least a dozen of servicemen didn’t make it and have been captured. The brigade also lost at least one T-80BV during the operation. Russian forces have later captured the Azovmash plant. 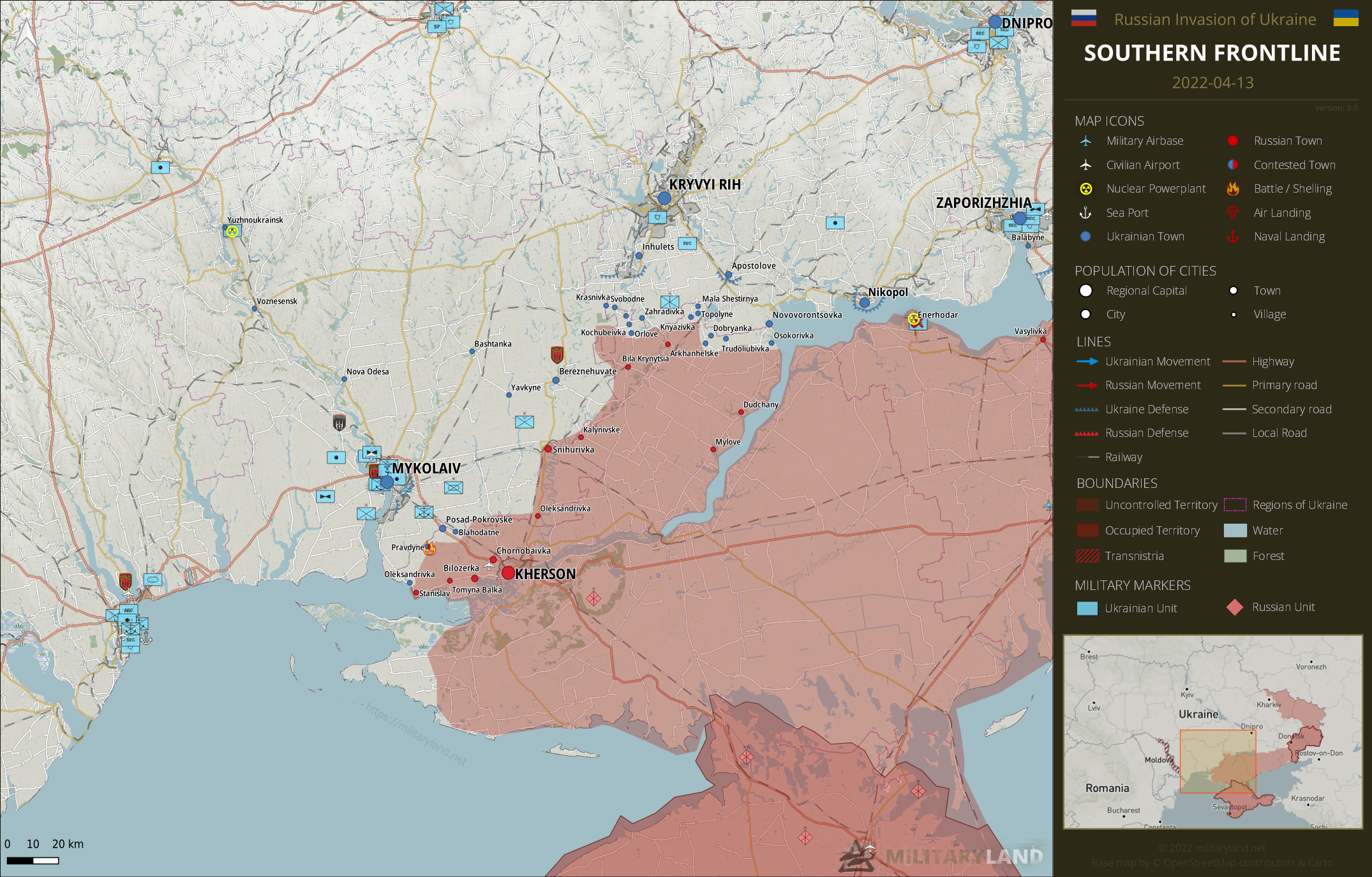 Ukrainian forces downed a Russian UAV in Kherson Oblast. Seven civilians died in Pryvdine as a result of artillery attack on the village. 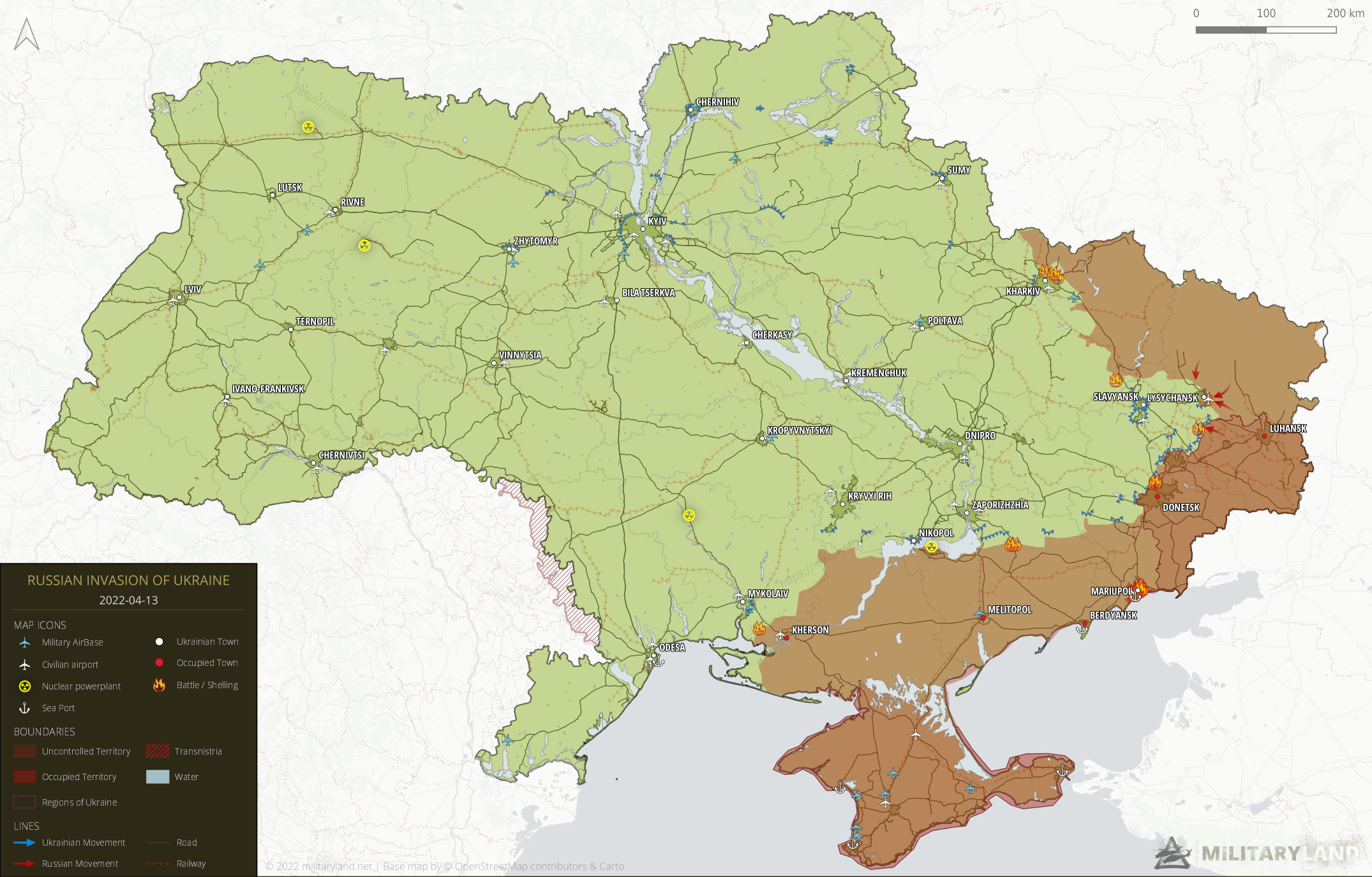 On 13 April 2022: – Oryx has tweeted, “Russia is now visually confirmed to have lost 500 tanks since it began its invasion of Ukraine on February 24” – from the Russian cruiser Moskva wikipedia page: “Ukrainian presidential adviser Oleksiy Arestovych, and Odessa governor Maksym Marchenko, said that Moskva had been hit by two Neptune anti-ship missiles and was on fire in rough seas. Arestovych said there were 510 crew members aboard. The Russian Defense… Read more »

More on ‘Moskva’ cruiser: a serious blow to the Russian Black See Fleet. Apparently it was a pretty sophisticated operation. It took place during storm. There are speculations that British RC-135 recon plane and Global Hawk operated in the area and they magically ‘disappeared’ (aka went into full ‘combat’ mode) during the attack and could have provided the targeting. Moskva is an old ship, not very advanced in terms of modern anti-missile defense, moreover looks… Read more »

lot of speculations, let’s say FOW . For me it not really matter to know yet what happened. what I see is, a townspeople killing machine is down.

Btw since the beginning of this war I expect NATO to give UA forces enough anti-ship systems to destroy all the RU navy around the black sea and azov sea. That would help NATO by limiting RU forces A2/AD in seas for a couple of years…

To destroy the Russian navy in the Azov sea you first need to have a formidable navy of your own meaning submarines and destroyers. There is a range limit on those Neptune missiles – 280km compared to the Kslibr missiles launched from Russian warships with a range of 2,500km. The entire length of the Dnieper river is 2,285km so those cruise missiles can easily reach Kiev. The Russians made a mistake moving Moskva in range… Read more »

I think you have been misinterpreting the Pryvdine story. The seven civilians did in all likelyhood not die as a result from an artillery attack. Ukrainian prosecutors have opened an investigation into murder of these seven civilians by Russian soldiers, who afterwards blew up the house to conceal their crimes.