Monday has passed without significant changes on the ground. The only bright exception is north of Kharkiv, where Ukrainian troops regained control of Zolochoiv. The situation in Donbas and in the south remains unchanged. 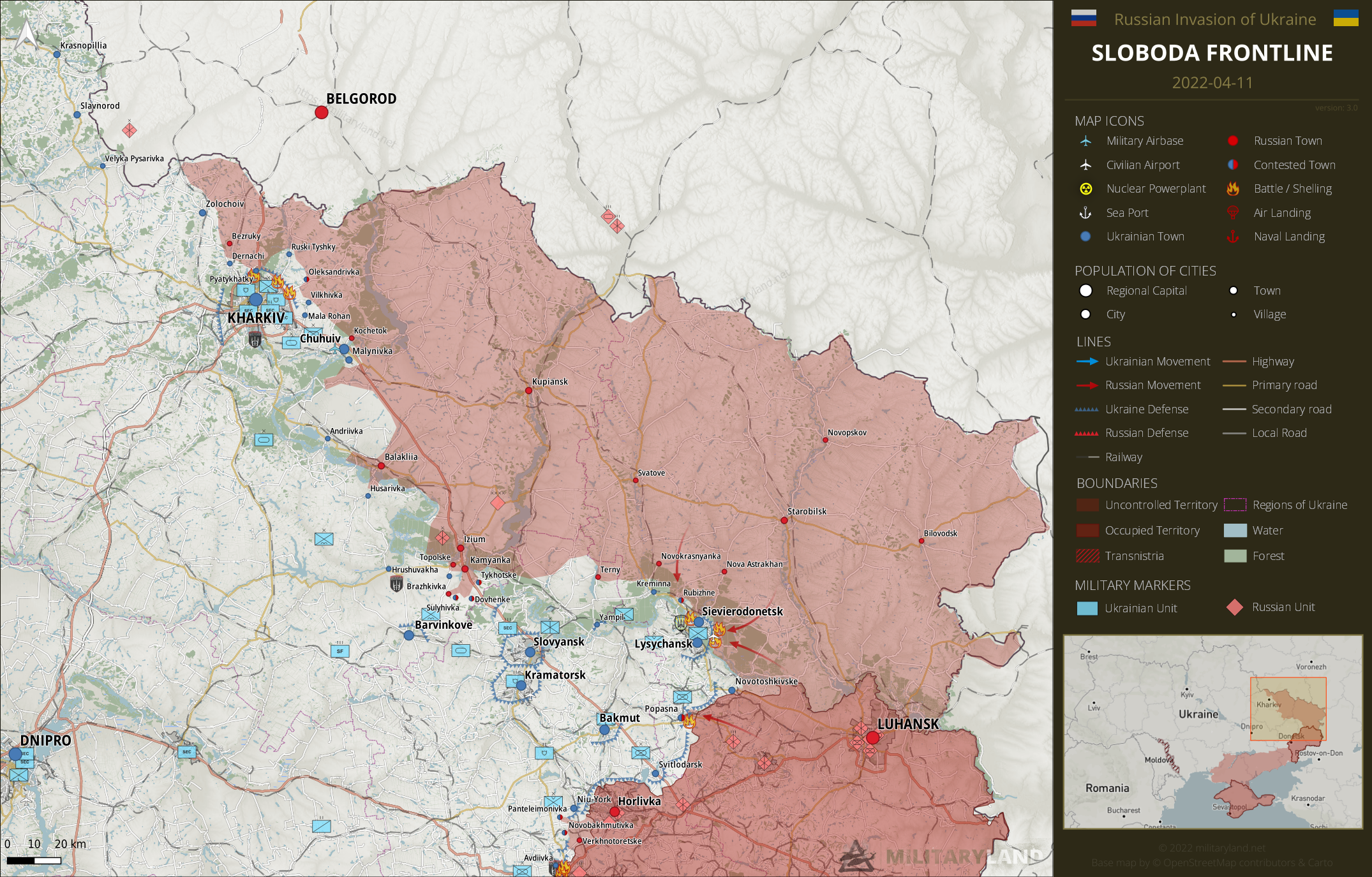 Ukrainian troops have reportedly launched a counter-offensive north-west of Kharkiv and regained control of Zolochoiv. The Russian advance towards Barvinkove and Slovyansk have been stopped for now. It’s very likely this is a planned pause before the imminent large scale attack. 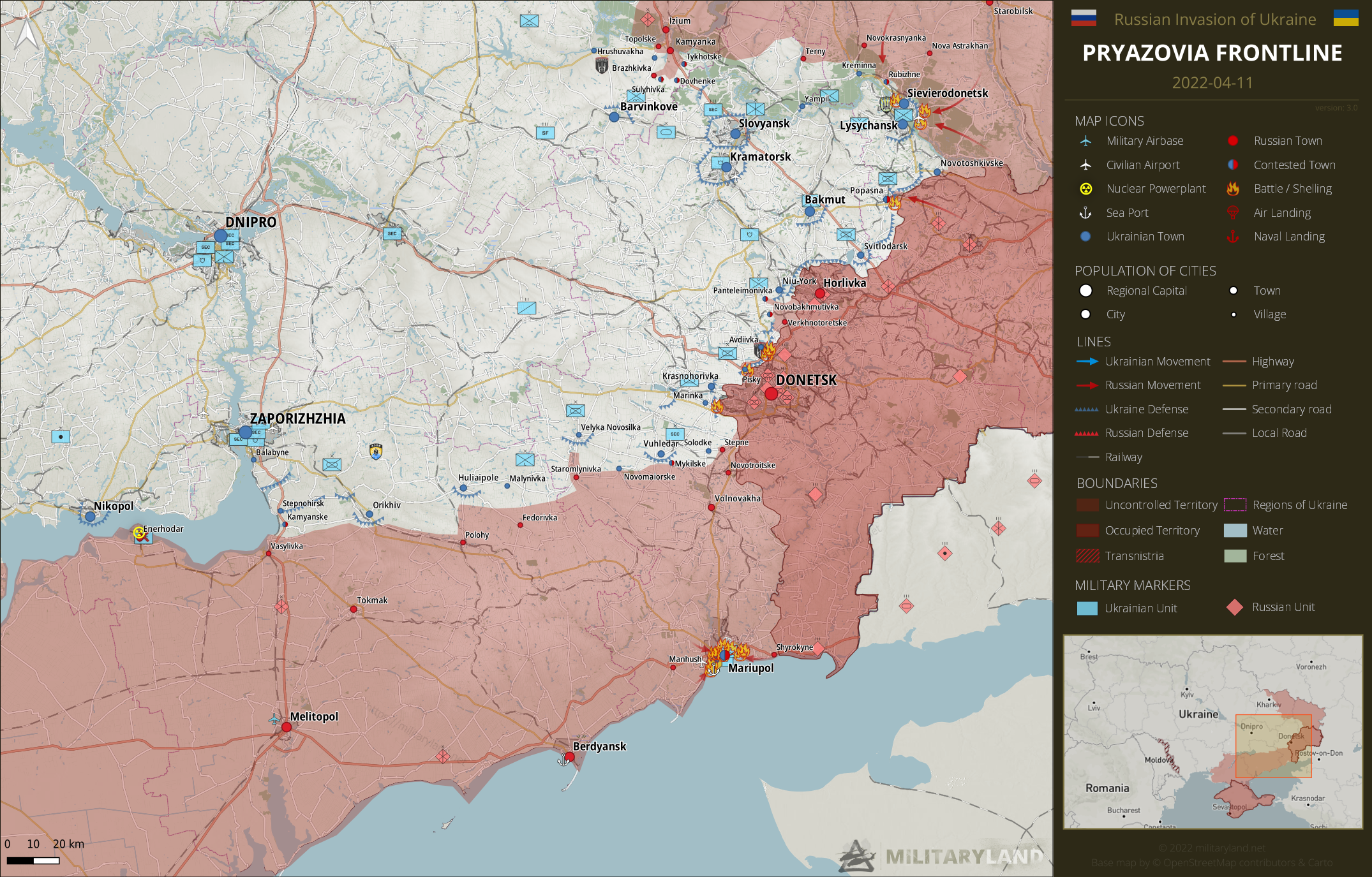 Russian troops shelled Marinka, Pisky and Avdiivka, but they didn’t have success breaking through Ukrainian lines in the area. 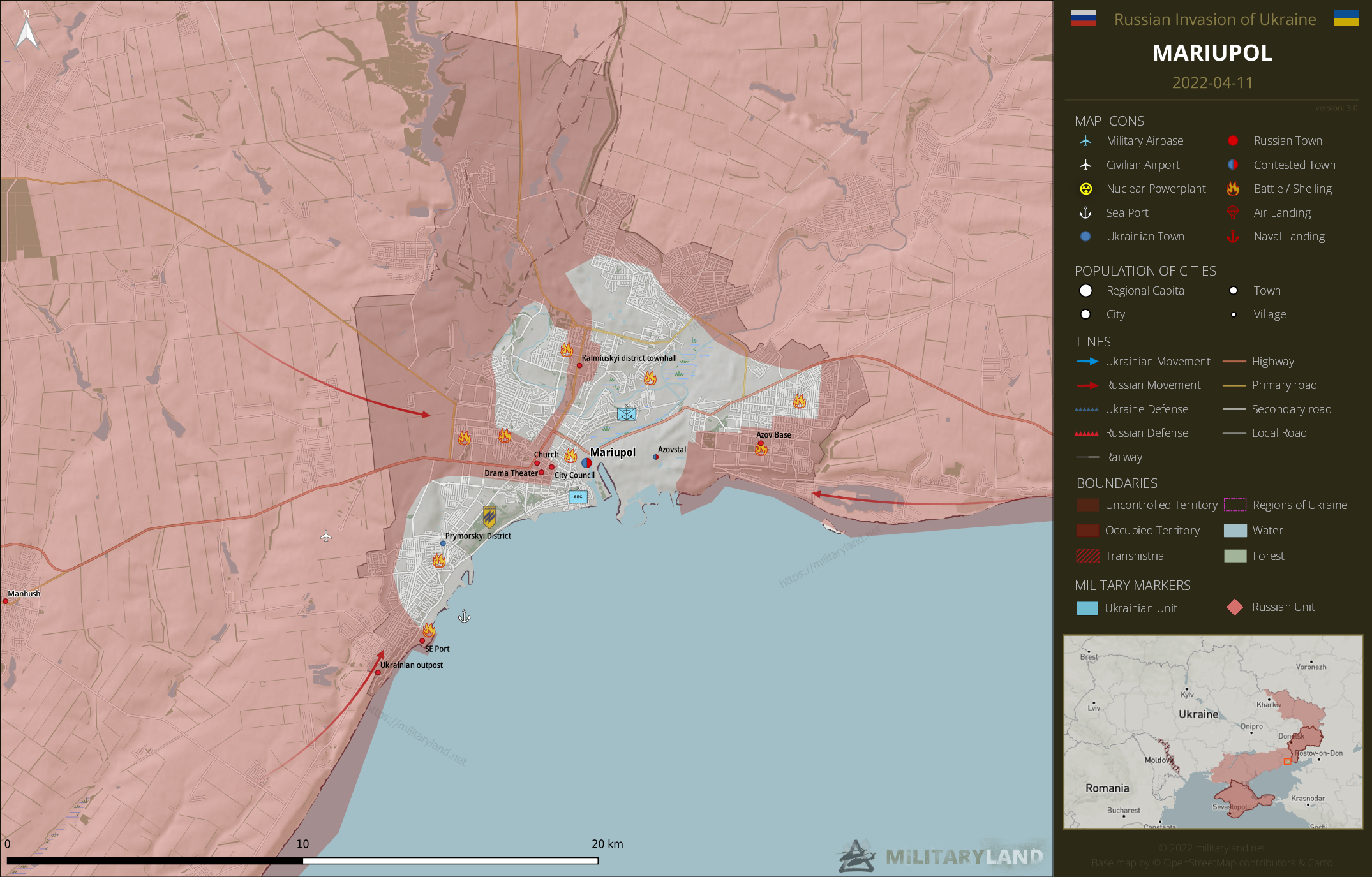 Ukrainian Azov reported late in the evening a Russian chemical attack on Azovstal plant. We’re waiting for confirmation. The situation in the other parts of Mariupol remains unchanged or covered by the fog of war. 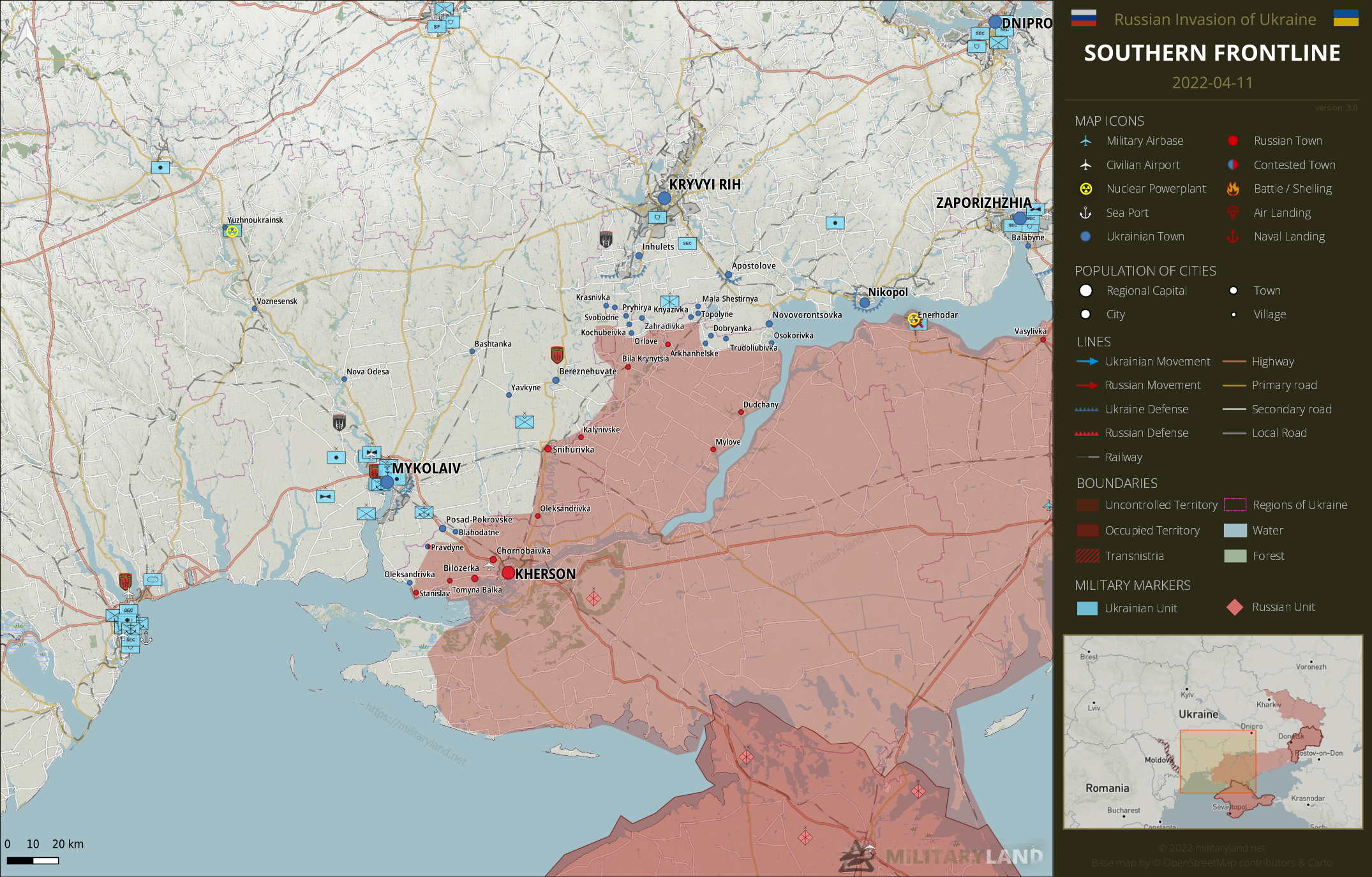 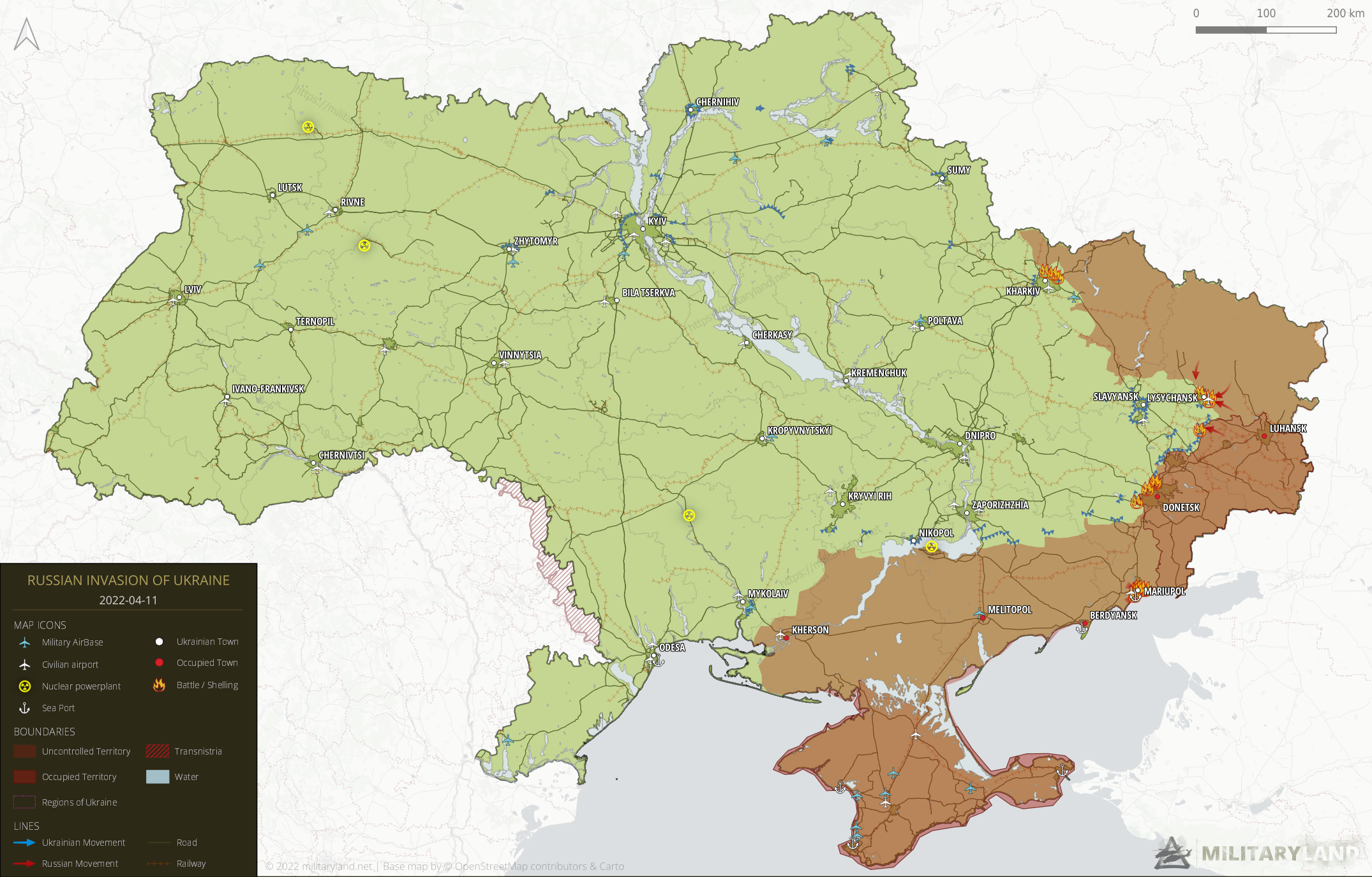 the name of the village is Zolochiv

Calm before the storm

Any more intel on that big column moving towards Izium and composition of those forces? Would indicate exploit push southwards unless they have some other plans and turning west towards Husarivka & Andriivka.

Thanks for the updates even on the quiet days.

Today I watched the last video made by CaspianReport, “The Ukraine War From Russia’s Perspective”. It’s about the “heartland theory”, far to be new, but it is well explained. Here the link: https://www.youtube.com/watch?v=MkrLUFAcjH0 I’m not linked whatsoever to CaspianReport, his conclusion is exactly what I think is the russian mindset behind the reason for this invasion. @Jerome: If you don’t like people posting links like I just did, tell me and I won’t do it… Read more »

in case you’re into geopolitics, you might be interested in Prof Mearsheimer’s views about the present crisis. The problem with Mearsheimer is that he is a realist while today’s politics is mostly shaped by devoted idealists so you won’t see him on mainstream media. It’s not just about Russia vs Ukraine, in case someone didn’t notice yet we are in the middle of a world (cold) war. Personally I think WW1 has the closest resemblance,… Read more »

the closest one is with Winter War against Finland

If you mean in the context of Ukraine vs Russia, absolutely, this is a good enough analogy. If you take the wider perspective – and also consider the US and China as players – it’s the modern reincarnation of WW1 aka the Imperialistic war.

yes, I mean this

Might be a good idea to add Novoajdar (Luhansk) to your map:

that was a big ammo dump that was destroyed two days ago..