Additional Ukrainian reinforcements have arrived to Donbas, while the evacuation of civilian population from Donetsk and Luhansk Oblasts continues. Russian troops are slowly, but surely advancing towards Avdiivka. 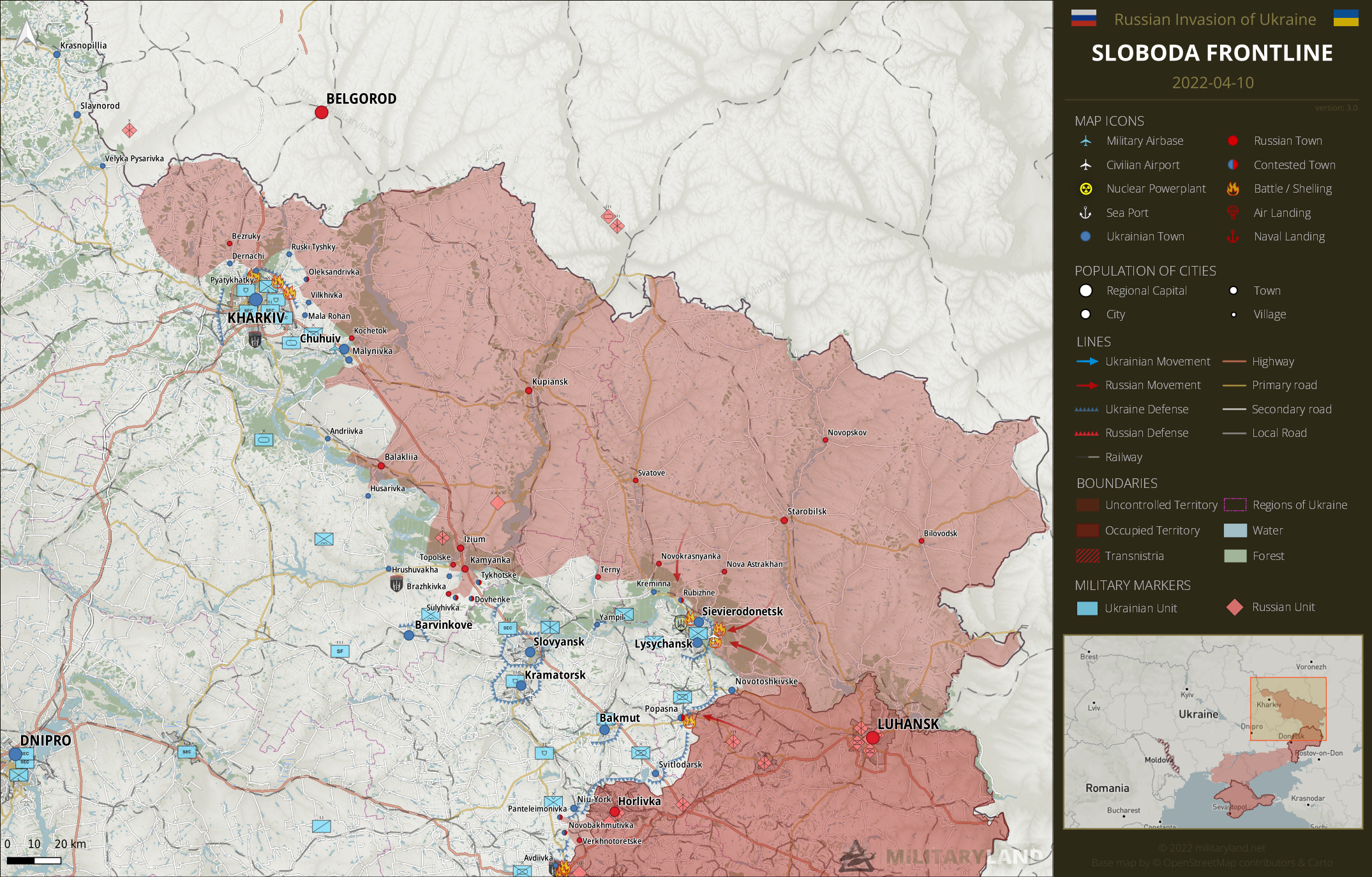 Russian troops maintain positions near Kharkiv, as Ukrainian forces don’t seem to have means to push the enemy to the border. A large Russian military convoy was spotted near Kupiansk, moving in the direction of Izium. Ukrainian HQ suspects that Russian army might go for Dnipro instead, and the Slovyansk operation is just a diversion.

Russian artillery hit nitric acid tanks in Rubizne and shelled Ukrainian positions near Sievierodonetsk and Popasna. The situation on the ground remains unchanged. 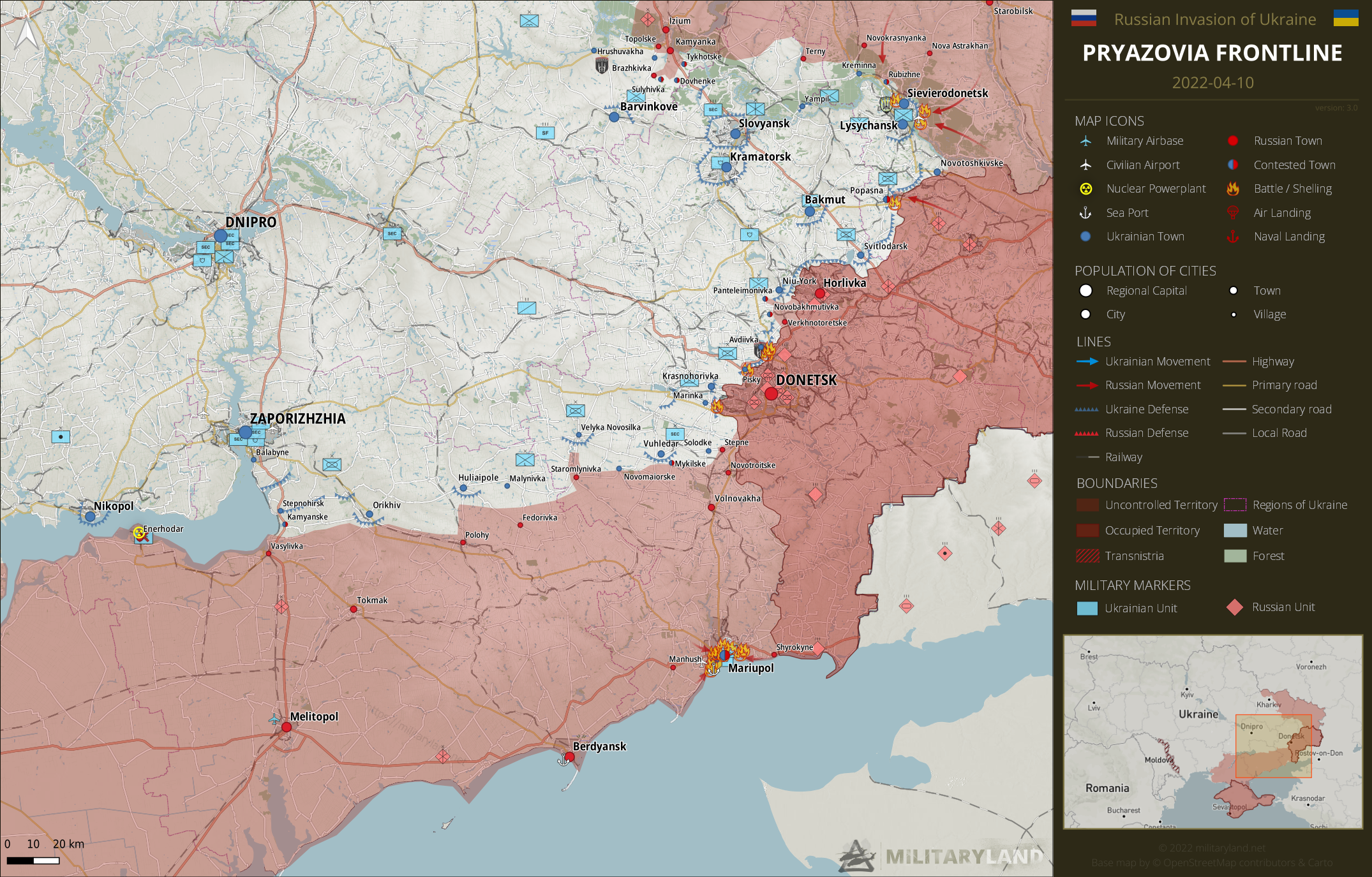 Russian troops reportedly advanced a few meters in Marinka and also pushed west of Verkhnotoretske. The Russian advance south-west of Horlivka is slow, but if they continue to push west, they may soon reach the main Ukrainian supply route towards Avdiivka.

There was no change on the ground in Zaporizhzhia Oblast. Ukrainian Army doesn’t have enough heavy armor and anti-air defense systems in the area to push forward. 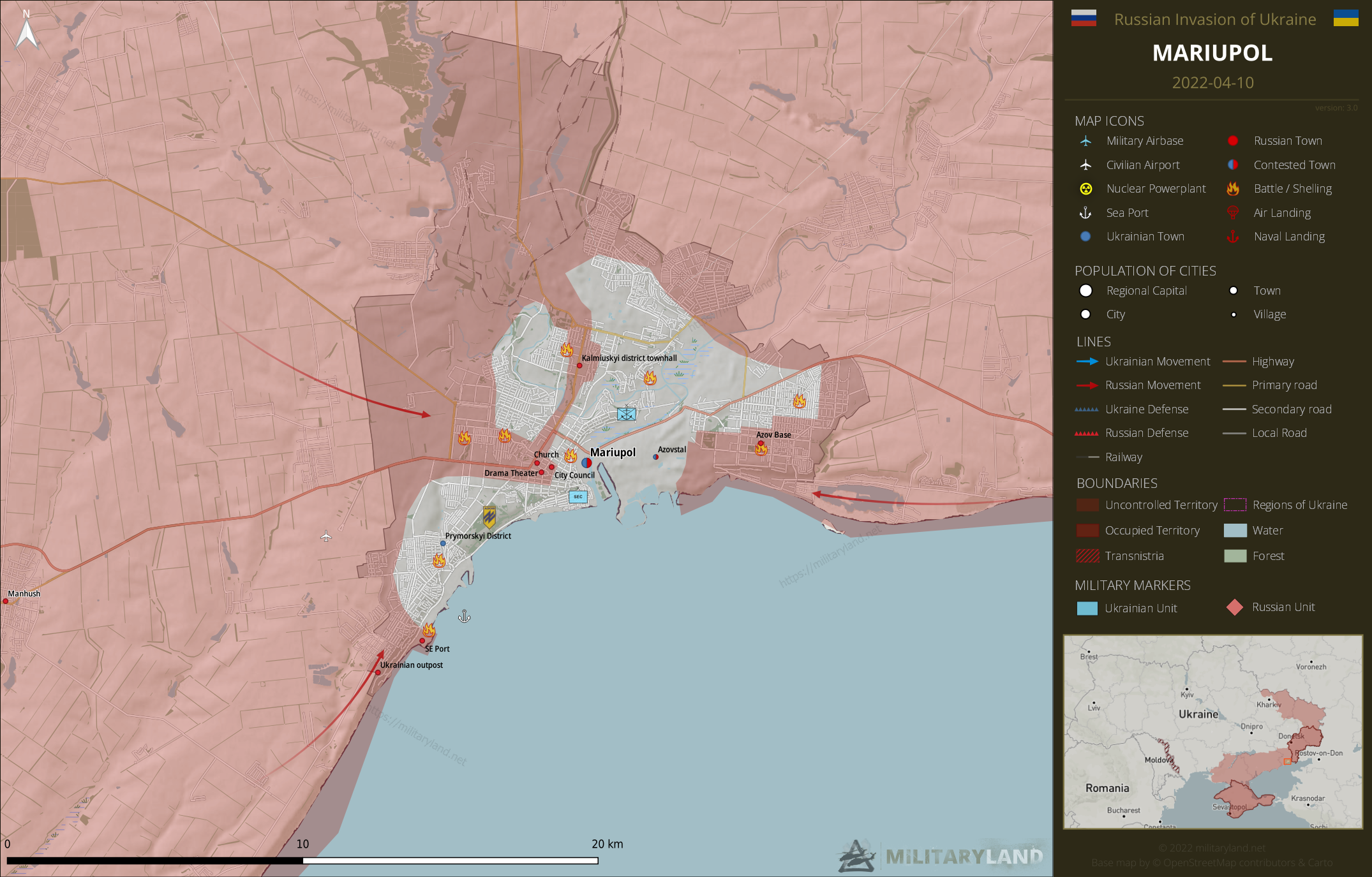 Russian troops hoisted its flag on the roof of Mariupol City Council. The building is located just two blocks from the Drama Theater, and it shows that the Russian progress in Mariupol is slow, despite the Russian propaganda claiming otherwise. 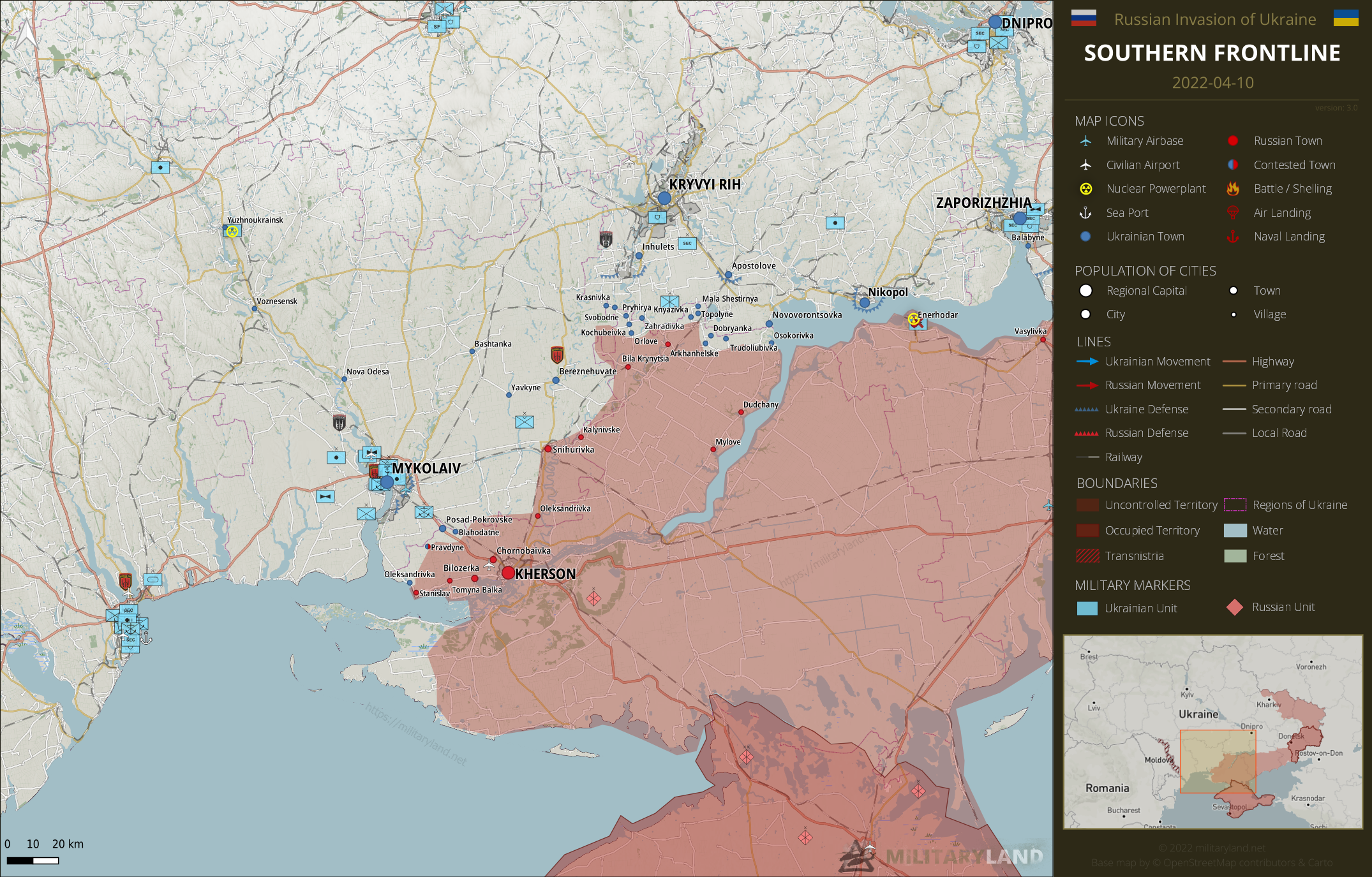 Correction: Recently published video shows Russian troops in Stanislav, not clear when they entered the village. I adjusted the map. 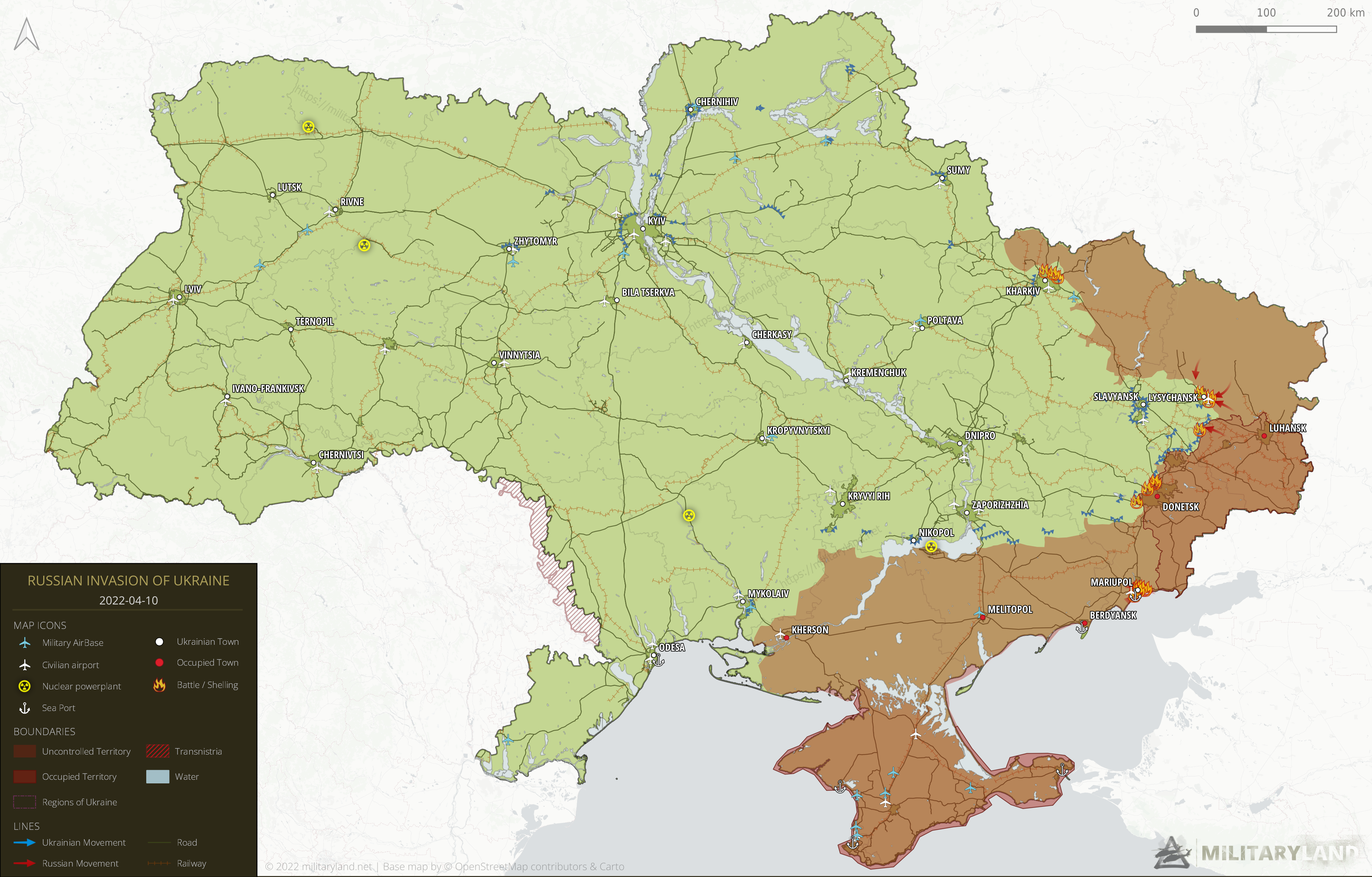 Ukraine really needs to go on the offensive and push south from Zaporizhzhia to Melitopol. If they did that they could cut off Russian troops to the west and south of Melitpol and could push east to Mariupol.

Forgot to mention that in Mariupol Russians captured fishing port effectively cutting Ukrainian Mariupol defence in half? twitter.com/TheStudyofWar/status/1513276775681302528 Your info are outdated.

The paralles between this war an WW2 ares pooky. Just like the Germans in the East in 1941 were quickly overstretched trying to advance all over the place, in 1942 they focused on Stalingrad which was leter besieged and taken – and then lost; and in 1943 they tried to launch the last strategic offensive at the Kursk Bulge by a pincer movement from the north and south. Now, Mariupol reminds the besieged Leningrad and… Read more »

Very good analysis up until the last paragraph when it turns into wishful thinking.

But don’t forget on long term work of sanctions against Russia. Russia will not have materials for repairing or even making new equipment. And Ukraine will be in better and better situation in comparison of Russia.

Yes, and for example wave of IT emmigrants from Russia. It will be HUGE problem for it.

after reading, I have the feeling that the RU forces are taking back the initiative east and south…

too soon to tell

Ukraine is fighting a defensive war, they won’t go on offensive unless they have a really good opportunity.

I reply to you but the reply would be the same to @ANONY. Sure, the UA forces are using defensive points (and your maps show that). The last month has shown that balance of power is in favor of the defender. The obstinacy of the RU in this war in the face of the UA will to defend their land and their people, can the RU expect something better than a Pyrrhic victory on the… Read more »

According to ISW, Mariupol got bisected yesterday and russians control part of the port in city center.

So, who controls Stanislav??

Russian forces, based on the visual footage.