Russian troops basically ceased all offensive operations in most directions on Saturday, limiting itself to just small scale attacks and shelling of Ukrainian positions and towns.

I’ve updated visuals of the maps. The roads are now colored and railways are more visible. Depending on the further fights and escalations, I’ll likely switch to more detailed maps in the future. 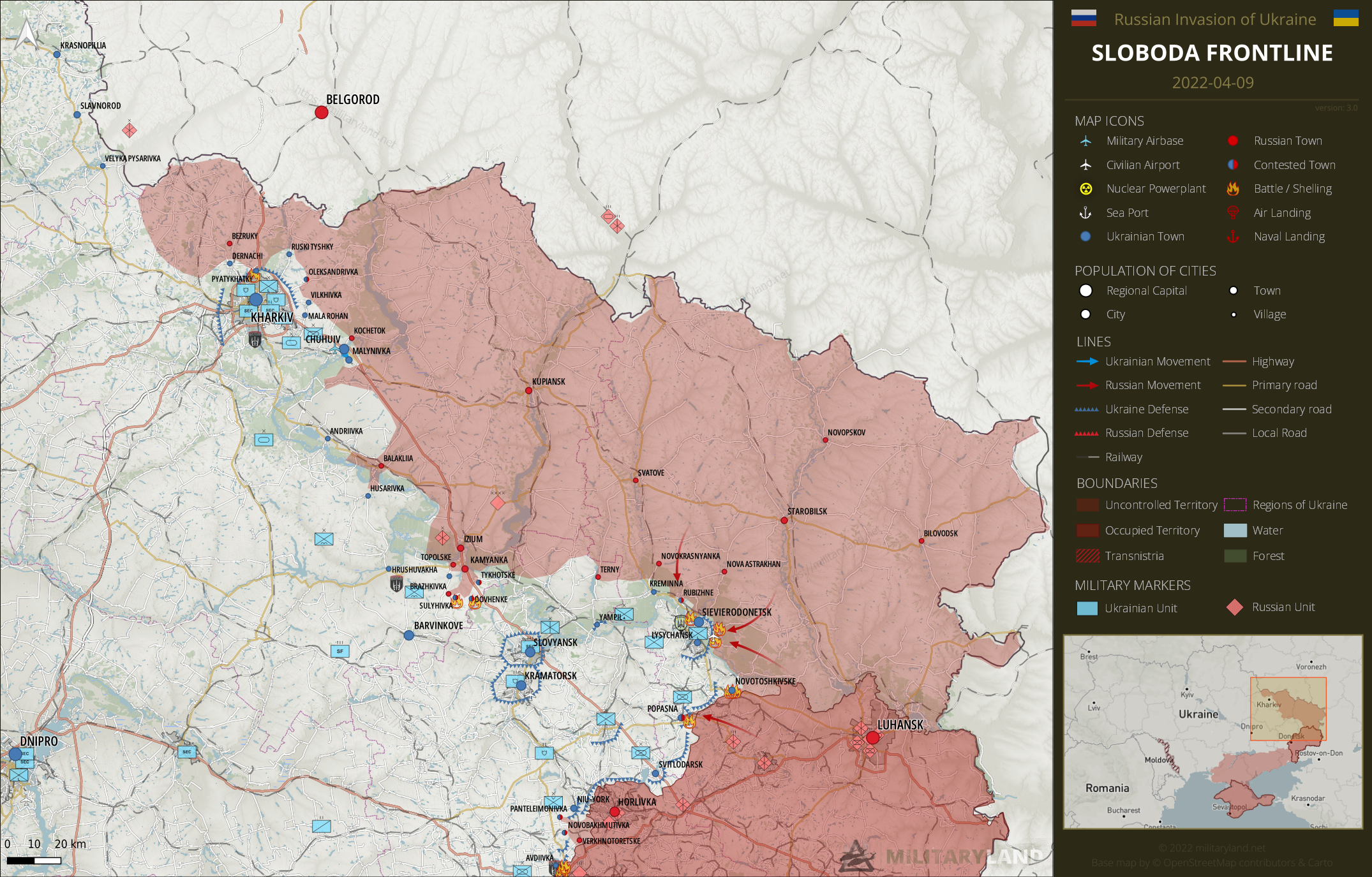 Ukrainian forces reportedly repelled Russian attacks in the direction of Barvinkove and Slavyansk. However, the situation in the area remains critical. 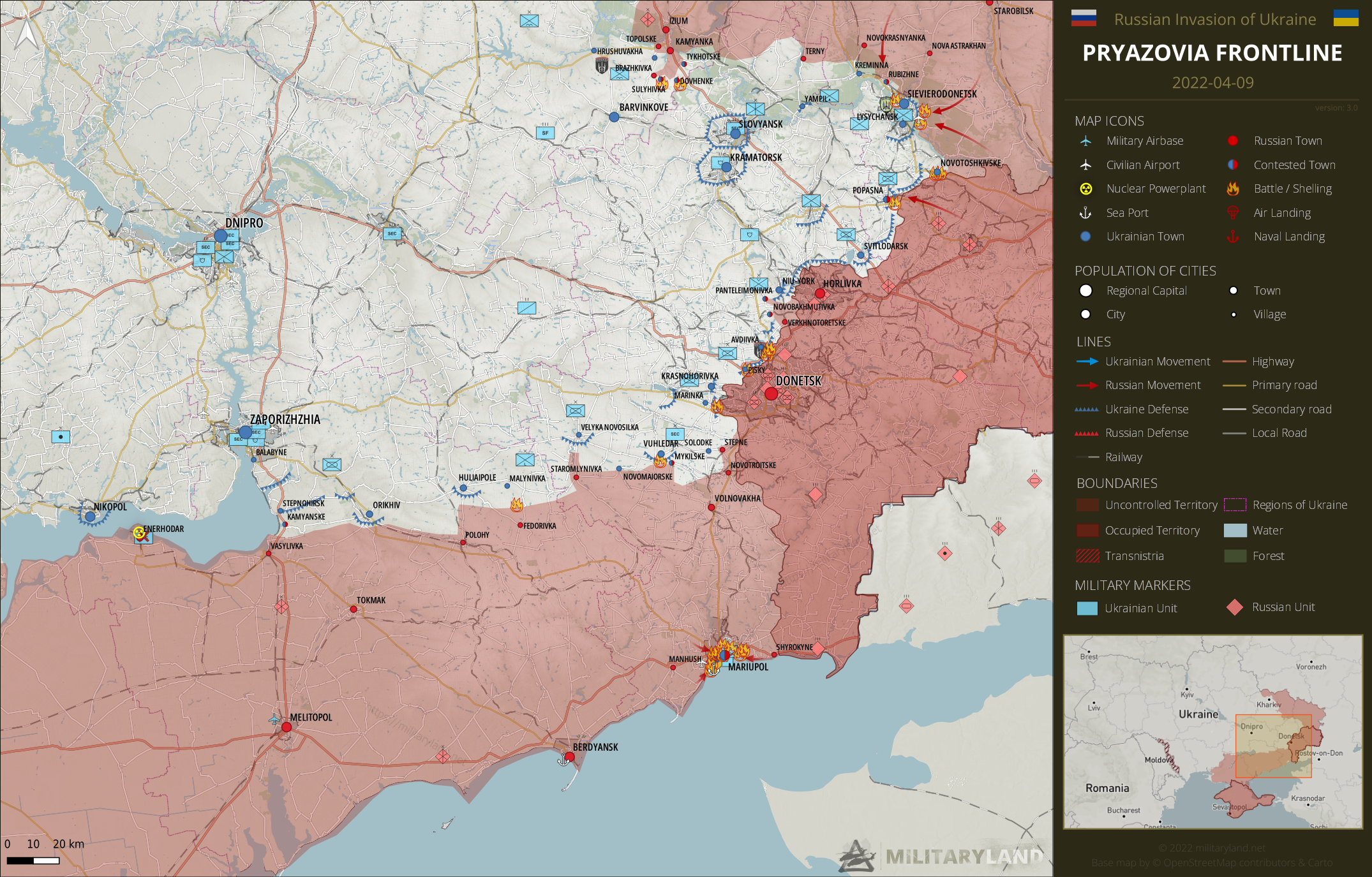 Russian army have continued to shell Vuhledar, Marinka and Avdiivka.

Ukrainian forces repulsed enemy attack in the direction of Malynivka. 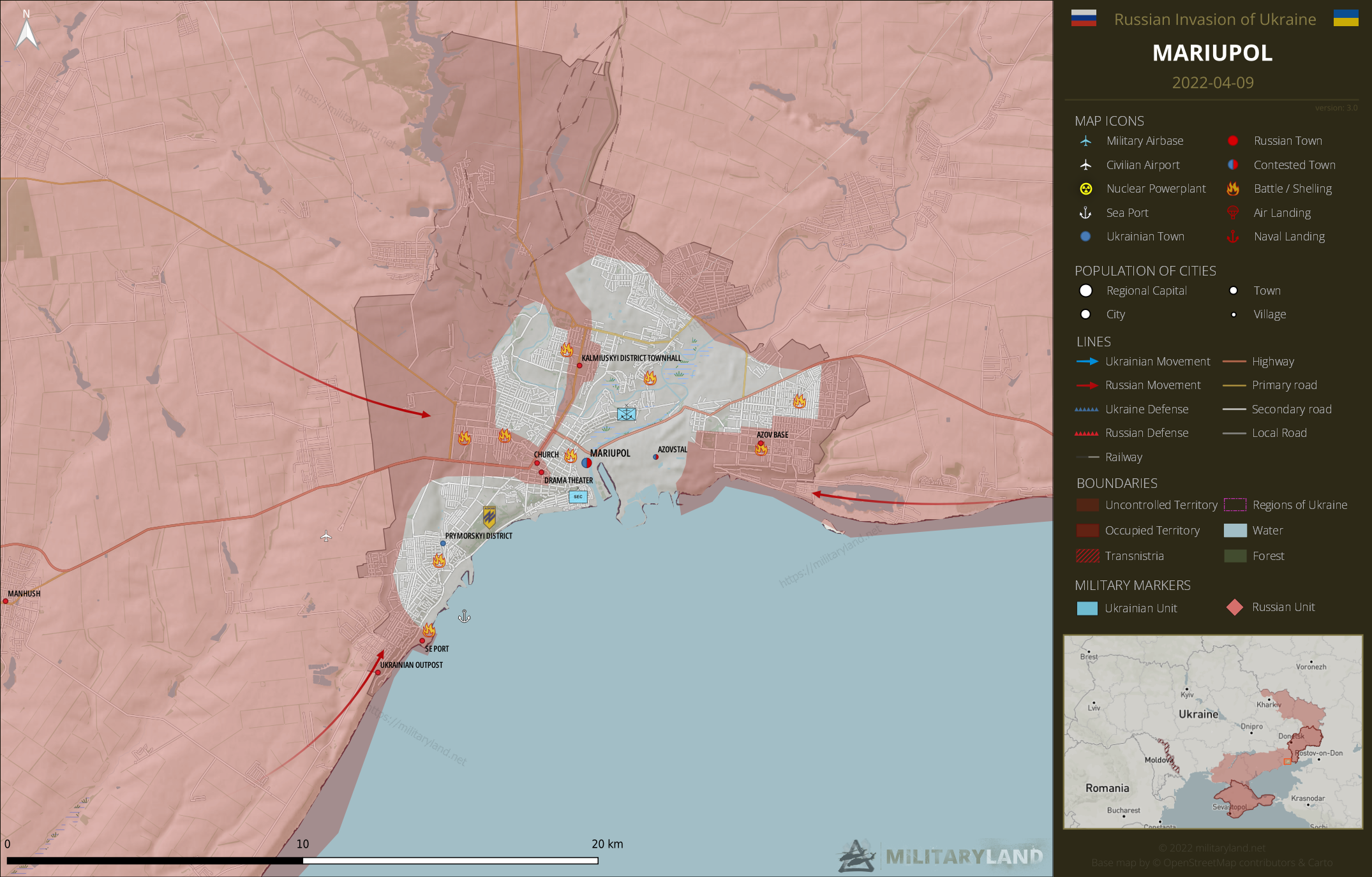 Ukrainian troops attacked the enemy stationed in the southern port, destroying two Russian trucks. The situation in the other parts of Mariupol remains covered by fog of war. 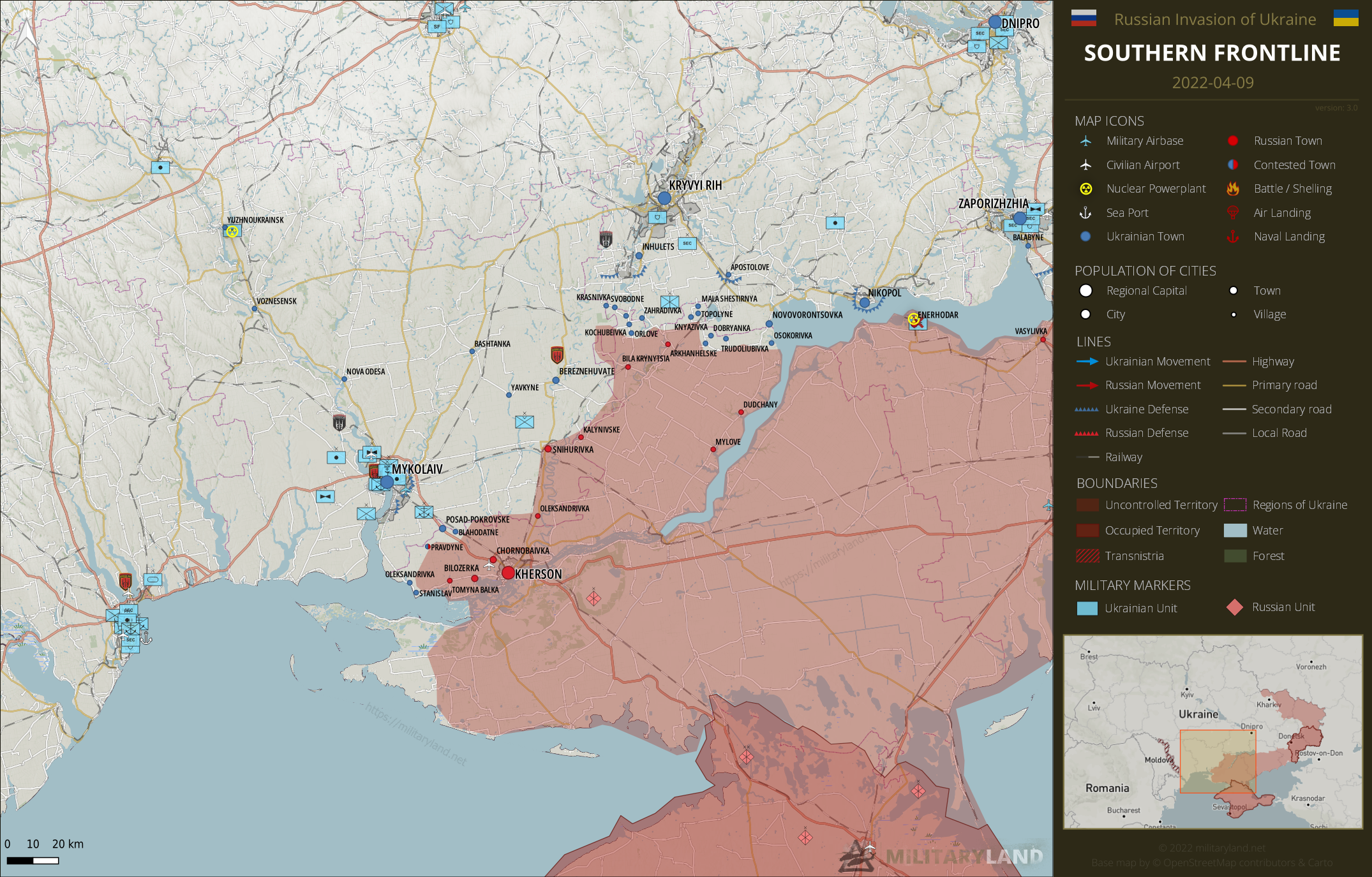 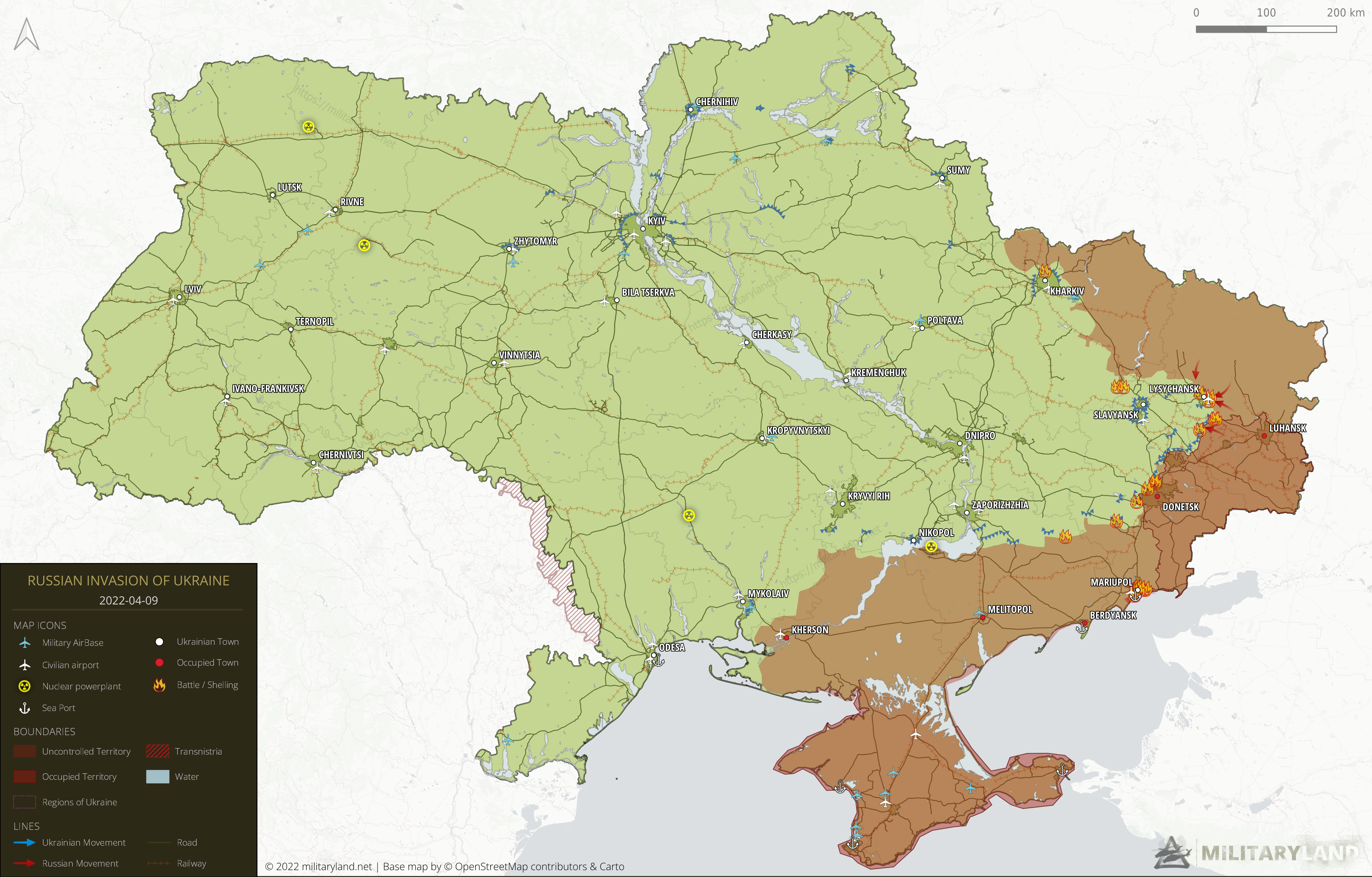 Hello Thanks for a great page. I have one comment though. Your map of Mariupol is not entirely correct. There is a pro-Russian video that shows their reporter at position: 47.104098, 37.565104 looking across the river towards Azovstal. I have included the link to the video here. The first part is mainly Russian propaganda but the clip from the above position occurs at 11min 45sec. I can email the geo location evidence if you like.… Read more »

fun fact about these Russians.. they dont stay at those positions for long… they were already pushed out, and lost a lot of men. Ukrainian defenders are not using fixed defense, but mobile one… they move from one position to another, so Russians might control one street one day, and next, its no longer under their control…

You are my main source on territory updates. Thank you for great work.

“Ukraine is now visually confirmed to have captured 1000 vehicles and pieces of (heavy) military equipment from Russia.” – Oryx

Check the “situation review” from the fierce anti-Ukrainian and pro-DNR mouthpiece Igor Girkin a.k.a. Strelkov. The situation in Donbas does not seem that critical for the Ukrainians, according to him: https://vk.com/igoristrelkov?w=wall347260249_653208