First Ukrainian reinforcements arrived to Luhansk Oblast while Russian army continues to regroup and move additional units to Donbas. The situation remain stable on all fronts, but that’ll likely change in coming days. 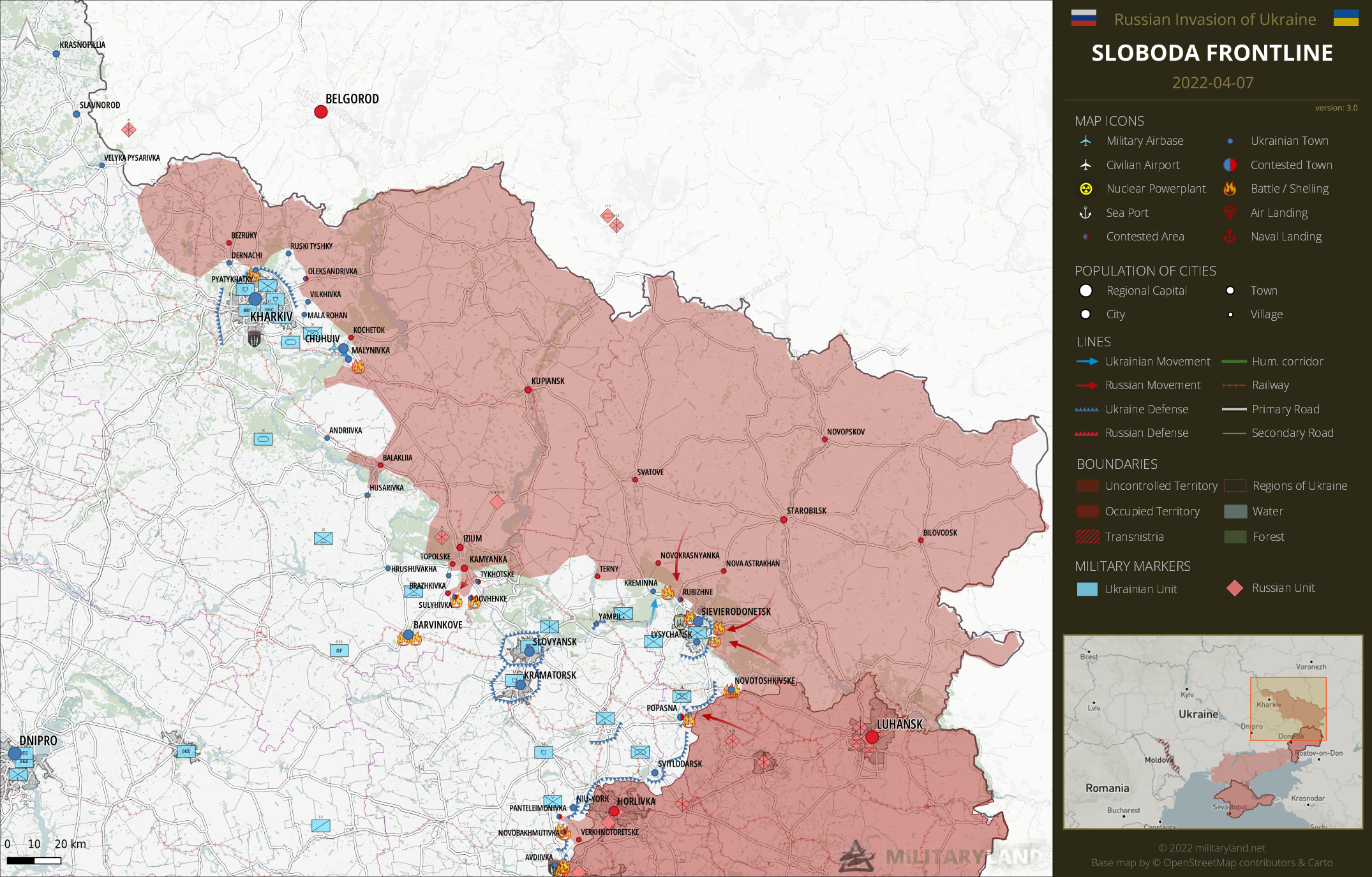 Ukrainian troops advanced east of Chuhuiv and regained control over the town of Malynivka. Fighting have continued near Sulyhivka and Dovhenke. Ukrainian troops are successfully holding out the enemy advance towards Barvinkove and Slovyansk.

Russian army shelled Barvinkove and damaged the only railway connection between Slovyansk and the western parts of Ukraine.

Ukrainian reinforcements in the form of elements from 128th Mountain Brigade have arrived to Luhansk Oblast and joined the fight immediately. The troops reportedly pushed Russian forces 6-10kms from the town of Kreminna.

Russian troops attempted to breakthrough Ukrainian lines near Novotoshkivkse, but the attack was repelled. 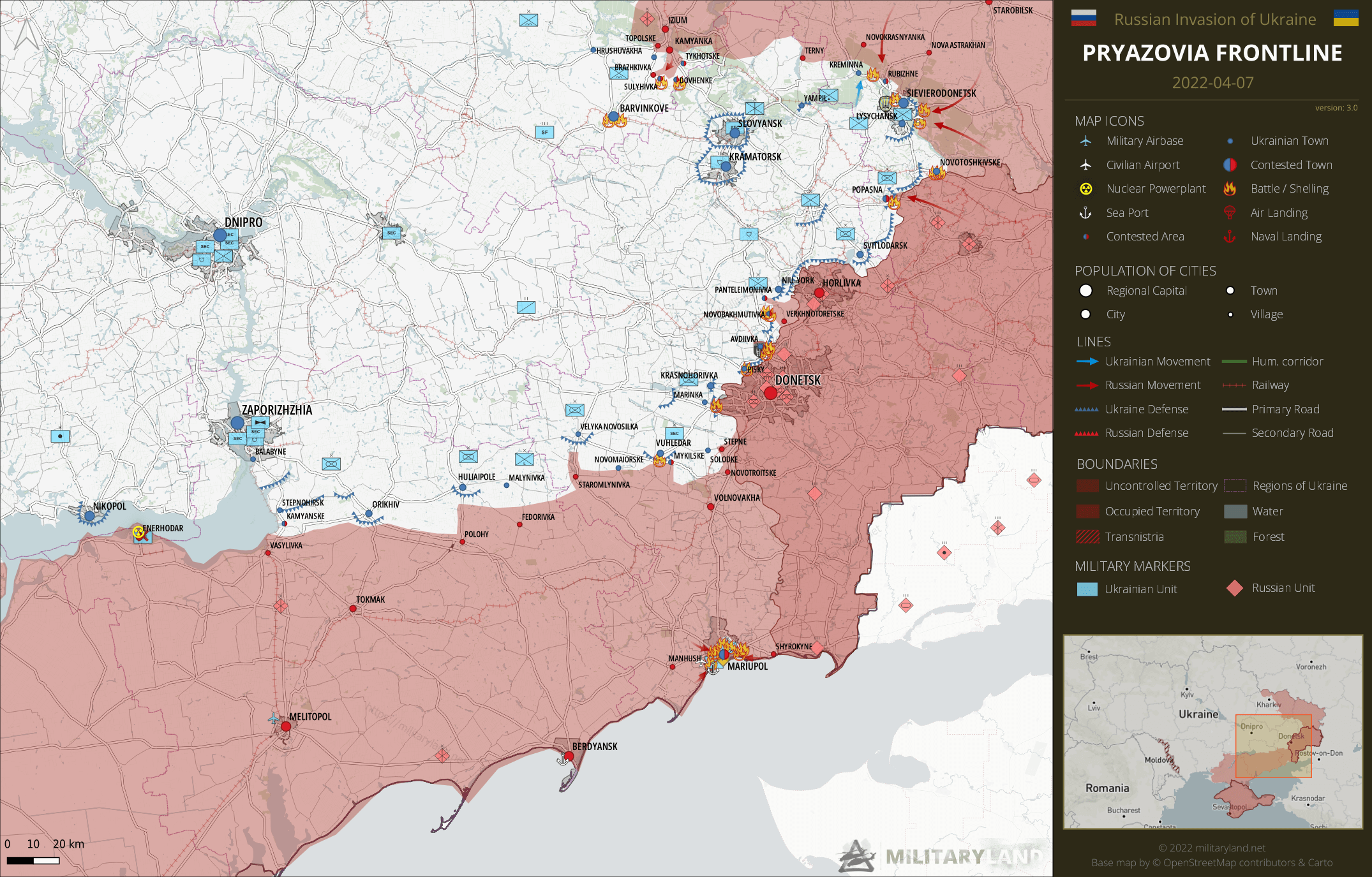 Heavy fighting was reported from the area of Marinka and Vuhledar. Russian forces have claimed a successful breakthrough through Ukrainian defense lines near Vuhledar, but the information cannot be verified at this moment. 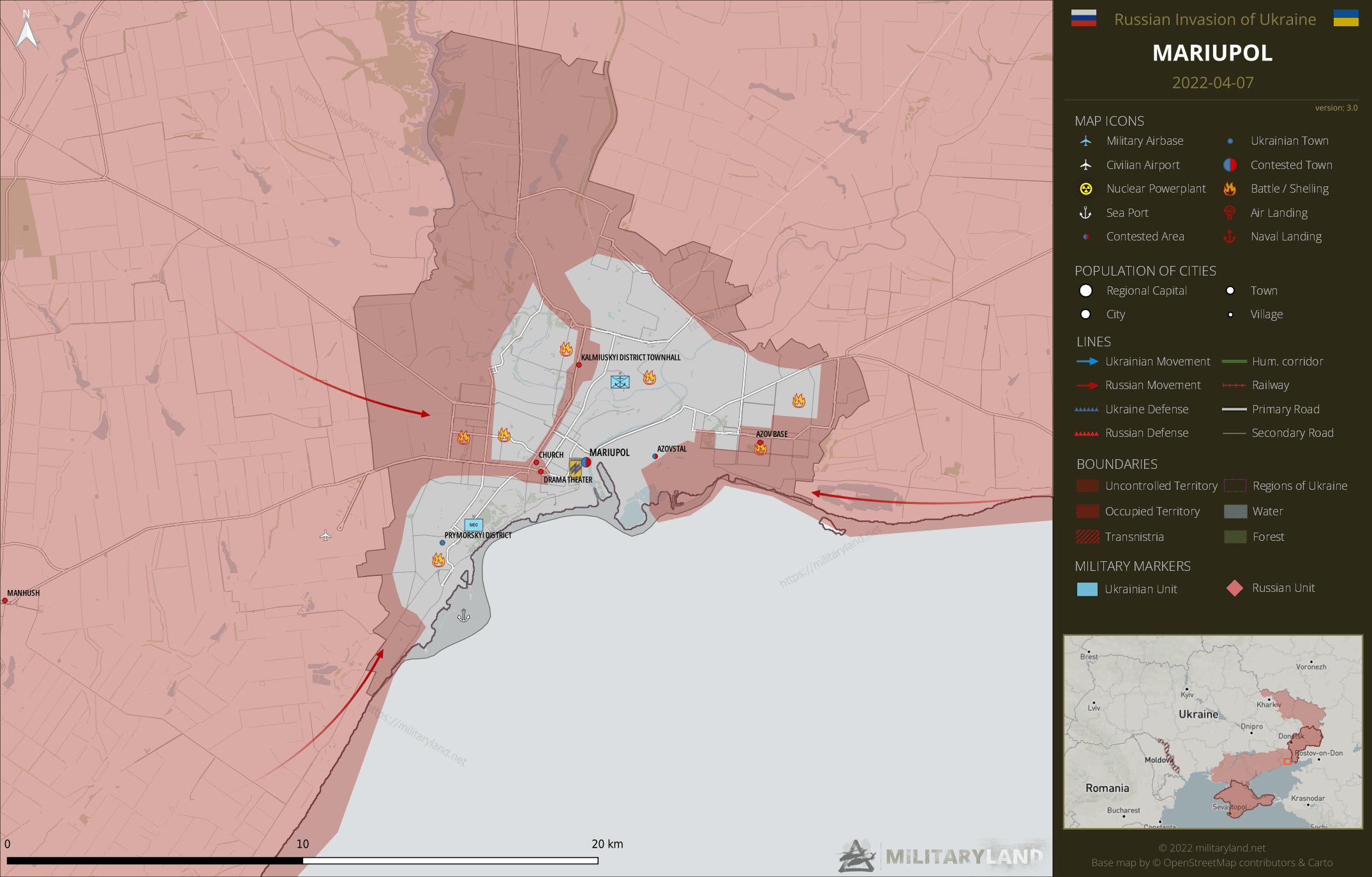 Azov Regiment released a video of its BTR-4 attacking Russian tanks on the western outskirts. The video might be a day or two old, but it shows Ukrainian forces have still operational heavy equipment in the city with enough ammunition. 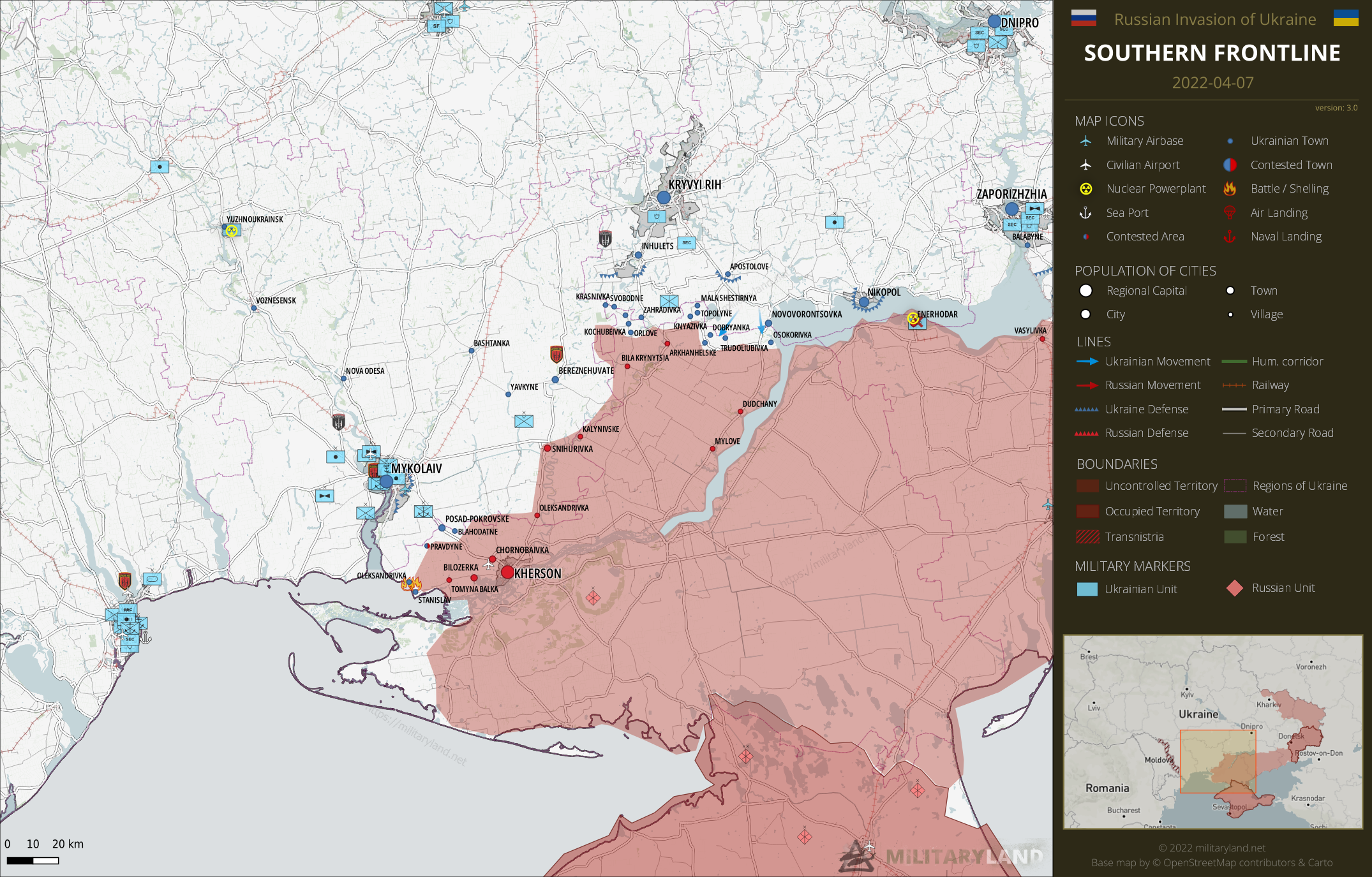 There was no change on the ground in Mykolaiv Oblast. Snihurivka remains in Russian hands, according to locals.

Fighting have continued in the vicinity of Oleksandrivka, south-west of Kherson. 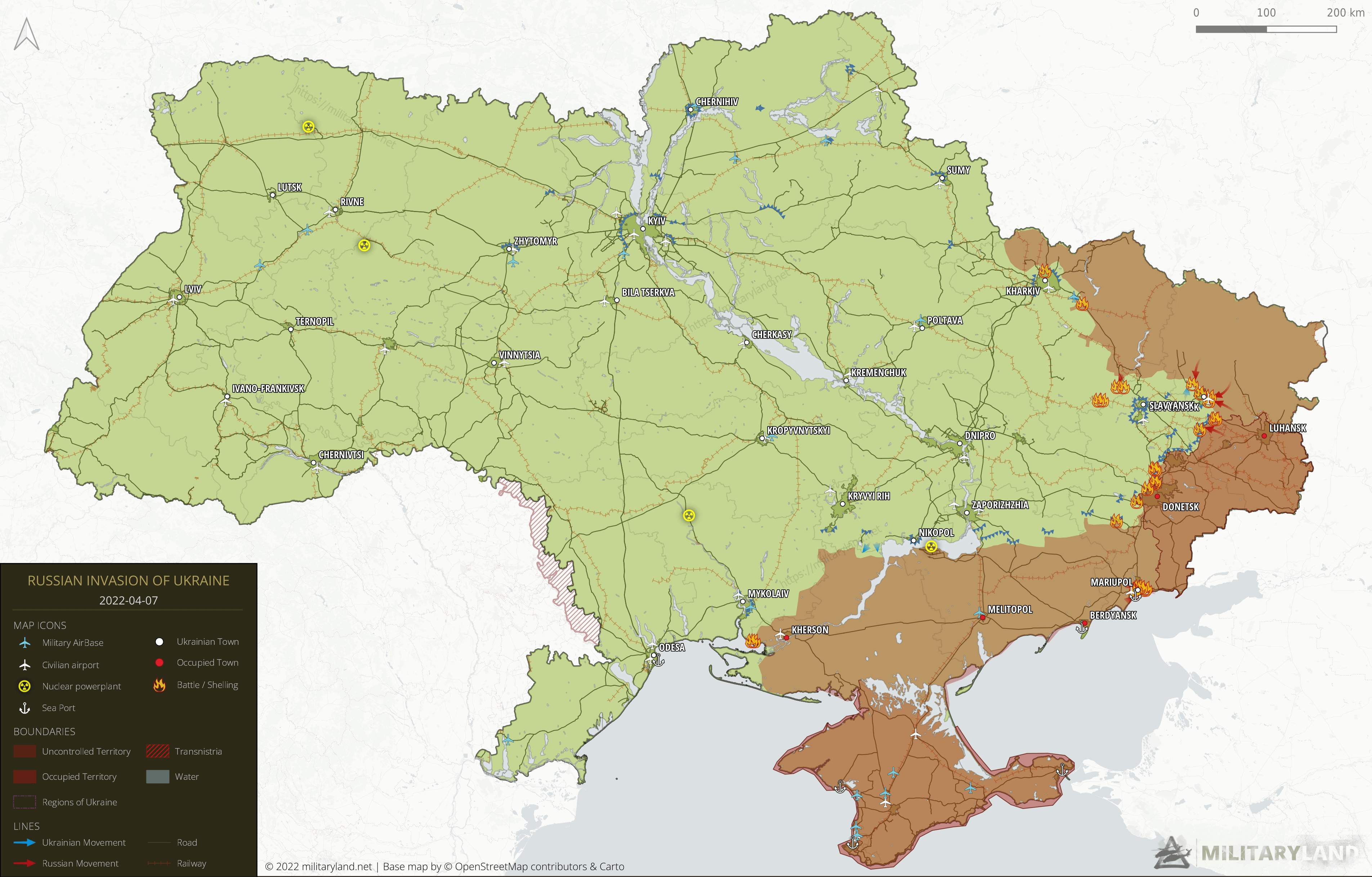 Impressive for the Azov battalion to hold the steel plant in Mariupol for so long.
If they keep this up, the Russians might use a tactical nuke. Would give an entirely new meaning to the moniker Atomwaffen Division.

Azovstal is a literal fortress, no wonder the Russians have so much difficulty taking it. It has dozens of tunnel running in every direction, lots of high positions from which snipers can shoot and move, hideouts from which they can stow munitions and food, etc.

Not a Military person
Reply to  Sinister Assailant

Not a military person, so excuse most likely a dumb question but do nuclear arms (that the Russians have) go bad with time?

JJ
Reply to  Not a Military person

they do.. and btw, tactical nuke would not solve anything… nuclear weapons are not that useful in terrain with good concrete defense bunkers etc… yes, they destroy everything in the epicentre, but its possible to survive inside of bunker even relatively close.. thermobaric weapons are much more effective than nuclear, because they kill everybody in the bunker by the pressure from sucking all air… and Russians are using termobaric weapons already… so from tactical point… Read more »

Dima
Reply to  Not a Military person

there’s a chance of it

I heard that nuclear weapons had to undergo regular maintenance works, and that some of the works were performed by Ukrainian specialists before 2014

Appreciate the explanations to my question.

If it falls on Azov nothing of value will be lost. The civilian human shields will suffer the worst of course.

Love these updates! Much more informative and updated than the media sources I began with. On a note of the situation, how effective are the redeployed Russian troops going to be? Considering their morale of giving up their previous positions to transfer over to the East side, as well as the losses they have taken both in soldiers and equipment, I’m wondering to what help they can be. Of course, reinforcements are always beneficial, and… Read more »

Battle for Donbass is going to be a major battle which is likely to define how this war ends (or continues). The idea from the Russian side is to encircle up to ¬80K (okay, nobody knows exactly of course) troops facing Donetsk, essentially roughly half of the Ukrainian army by pushing from the North (Izium) and the South (~Gulyaipole, Ugledar) and meeting somewhere in the middle. Ukrainians will try to prevent that and as some… Read more »

It seems to me like preparation before Battle of Kursk. The last chance for agressor to win. Put everything to one card.

No russian army in the east is such an untrue statement – Mariupol was encircled only after RUSSIAN army reached it pushing from Crimea through Melitopol and Berdyansk. In Mariupol there is video with Kadirov and a literal general of the russian marines. Also weeks ago, there were videos of echelons of russian troops with heavy SPGs arriving around Donetsk. ‘Militia only’ statements are so far just the current excuse for the frontline with least… Read more »

First of all, I said ‘mostly’. Second, SPG is a type of artillery. Finally, if you mean Mordvichev by ‘General of the russian marines’ (there is no such rank, and marines in Russian/Ukrainian armies are not the same as US Marines), this is fake news. Lt Gen Mordvichev was killed as reported by the Ukrainian side and everybody knows they are never wrong and never lie.

It’s not militia in its common meaning.
They mainly consist of various mercenaries, orc soldiers, criminals, some locals motivated by money, many locals forced to join ‘militia’ under threat of murder or imprisonment, and very few locals still truly believing in the idea of “russian world”, but strictly under orc command.

just in case, I’m from Ukraine

I don’t care where you’re from.
That whole front was staffed by the worst scum both sides could muster. Look at all the Western mercs who went after 2014 because they were addicted to war.

Yes, there may be some mercenaries in Ukrainian army as they can be present in any army, but no mercenaries were here before spring 2014. But it’s Mordor that annexed Crimea in March 2014 out of the blue, and started sending arms and mercenaries to Donbas in March – early April 2014. They say ‘you didn’t listen to the voice of the Donbas people’. If this voice sounds like the shelling the cities and killing… Read more »

The ‘huge field battle’ would normally favor the Russian armored maneuver elements, especially (as you mention) if they can establish air superiority. However, the defense always has the advantage, and this is going to be enhanced by higher than normal concentrations of anti-armor and anti-aircraft missiles. So far, the Russians have shown a complete inability conduct a coordinated combined arms offensive. We’ll see if that changes.

We have to look back on Yom Kippur war and see one detail. Sinai is open terrain as well. “On October 8, after Elazar had left, Gonen changed the plans on the basis of unduly optimistic field reports. Adan’s division was composed of three brigades totaling 183 tanks. One of the brigades was still en route to the area, and would participate in the attack by noon, along with a supporting mechanized infantry brigade with… Read more »

Significant losses is a completely relative assessment. A thousand dead soldiers could very well be considered significant losses. If I were you I would listen to Russian numbers more carefully because, contrary to the Ukrainian paramilitary circus, the Russians run a professional military where every family is notified if a soldier dies/becomes irretrievable. The Ukrainians are the ones who need to keep spinning the narrative that they are on top of it, to at least… Read more »

They reveal more about themselves than they realize. They accuse Ukraine of doing exactly what they like to do themselves. Impressive self-disclosure.

“the Russians run a professional army”
LOL
Professional at running out of gas & abandoning tanks in the countryside
Very professional indeed as far as looting, raping, mass-murdering & deporting civilians

This is the funniest example of coping I have ever seen.

@PEDRO: I twas reporting a fact. I wasn’t arguing whether or not the statements are true. Unlike you and other Putin’s cheerleaders, I don’t forget that there is people dying, no matter we are talking about RU or UA dead, but I won’t forget whose behind this war!

Are you writing from Kazan?? A “circus” defeated a “professional army”?? Just wake up from your dreams. I prefer to pay more productive things with my taxes, but i’m pretty happy to help a people in their fight for their lives, with my hard earned money. Russia is in an hybrid war against Europe for years, at least now some europeans as noticed it. If you get money writing those messages, good for you, If… Read more »

I’m from Germany and I can’t think of anything better to spend my taxes on than guns for Ukraine. This is money for freedom. Germany’s weapon industry should produce weapons for Ukraine 24 hours a day.

I hope our sleepy chancellor and clumsy secretary of defense wake up….

There 2702 visually confirmed Russian vehicle losses so far: https://www.oryxspioenkop.com/2022/02/attack-on-europe-documenting-equipment.html That means either massive losses in men or massive cowardice and morale problems in the army (due to them being abandoned) there is no way which an army can fight without morale issues and without far more losses than 1000 and lose 2702 vehicles (and in truth the real number will be significantly higher because not all vehicles captured or destroyed are visually confirmed and… Read more »

and what about the losses of the Ukrainian troops? why so much secrecy?

Because they have lost a LOT of people. They mobilized every man between 18 and 60 and sent them into the meat grinder. How much training and equipment did they actually have?

Except that’s not true. They have forbidden men from 18 to 60 to leave the country because they need them to run the economy and the activities supporting the war effort. They aren’t sending untrained elders into the meat grinder, they only use local militias and called-up reservists in ad hoc units.

Ukrainians said they have over 7000+ dead russian bodies in some railroad cars, but Russians dont want them…