Ukrainian officials have asked all citizens located in Luhansk and Donetsk Oblast to evacuate immediately amid the reports of Russian army preparations to launch a new offensive to capture both regions. US intel suggests Putin wants to conquer Donbas before May 9 and the Victory Day Parade. 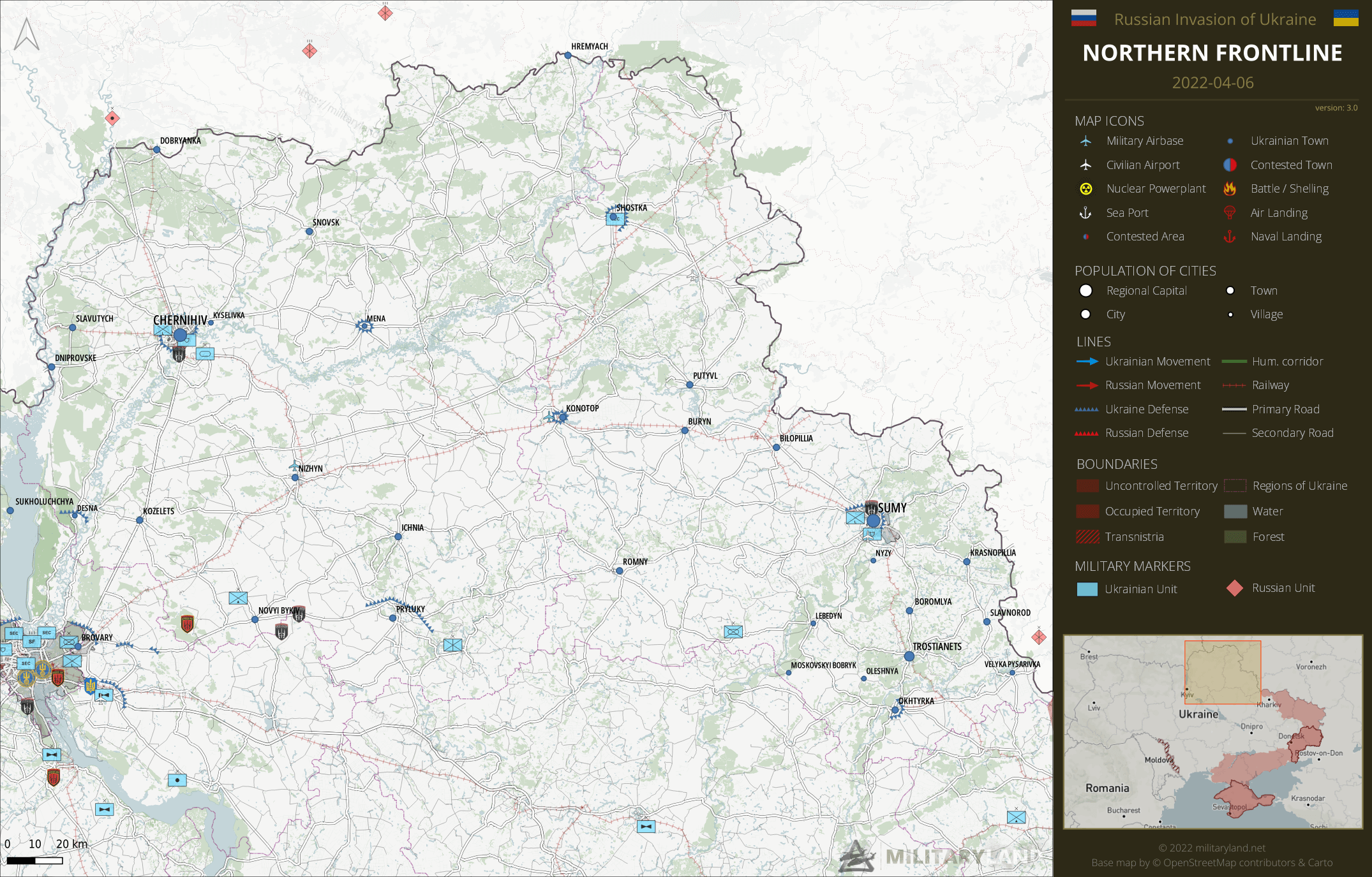 There was no change on the ground in Chernihiv Oblast.

The Sumy Oblast Council confirmed there are no villages/cities under the Russian control. However, there are still some scattered Russian elements roaming near the border. Ukrainian Army, in collaboration with the local Territorial Defense units, are clearing out these areas. 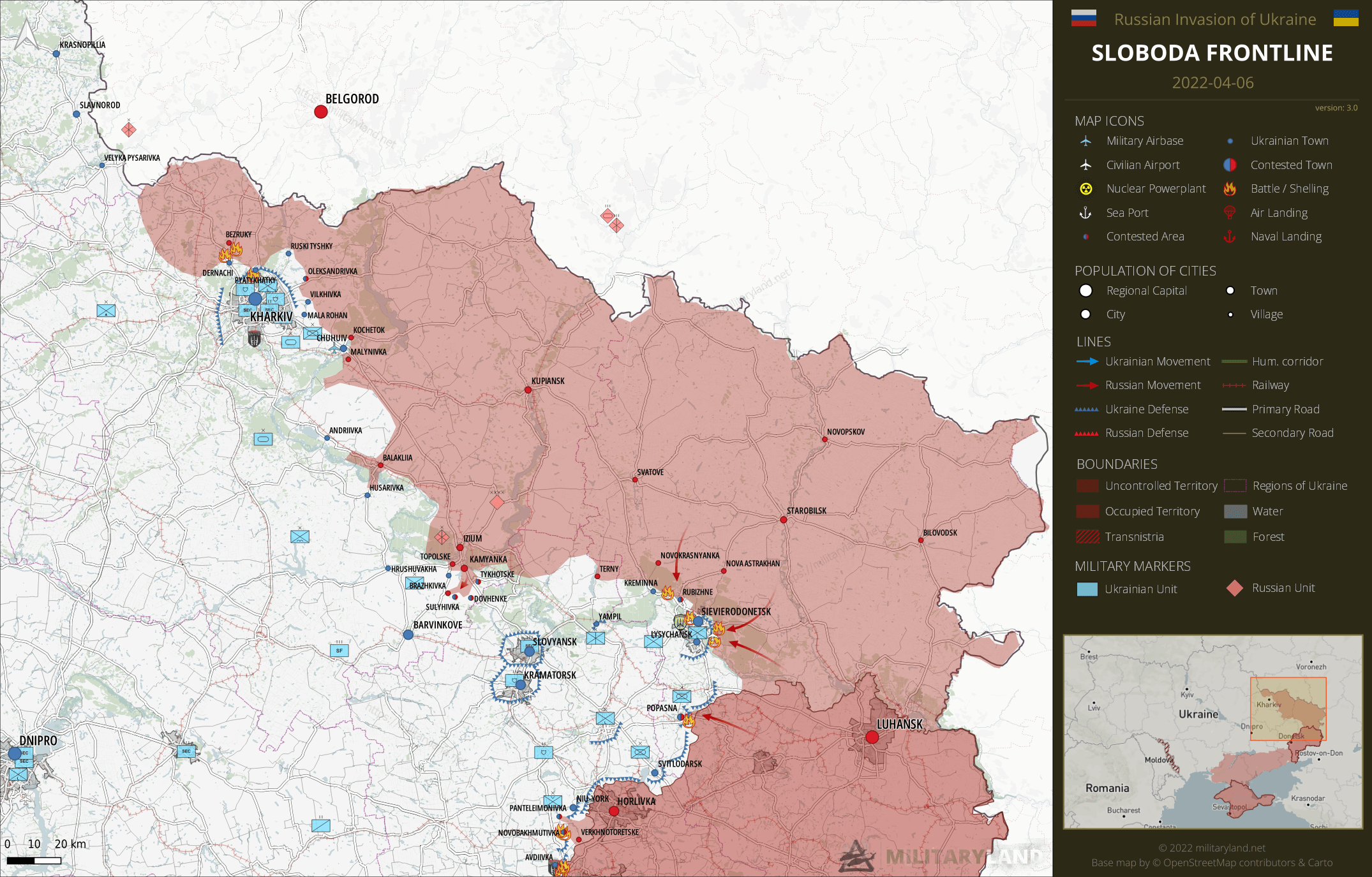 Ukrainian intelligence says Russian troops have successfully repaired a railway in the north and the first military echelons arrived to Kupiansk from Russia.

Russian forces shelled Kreminina, Sievierodonetsk and Lysychansk. The street fighting have continued in Rubizhne and Popasna. Neither side reported gains or losses. 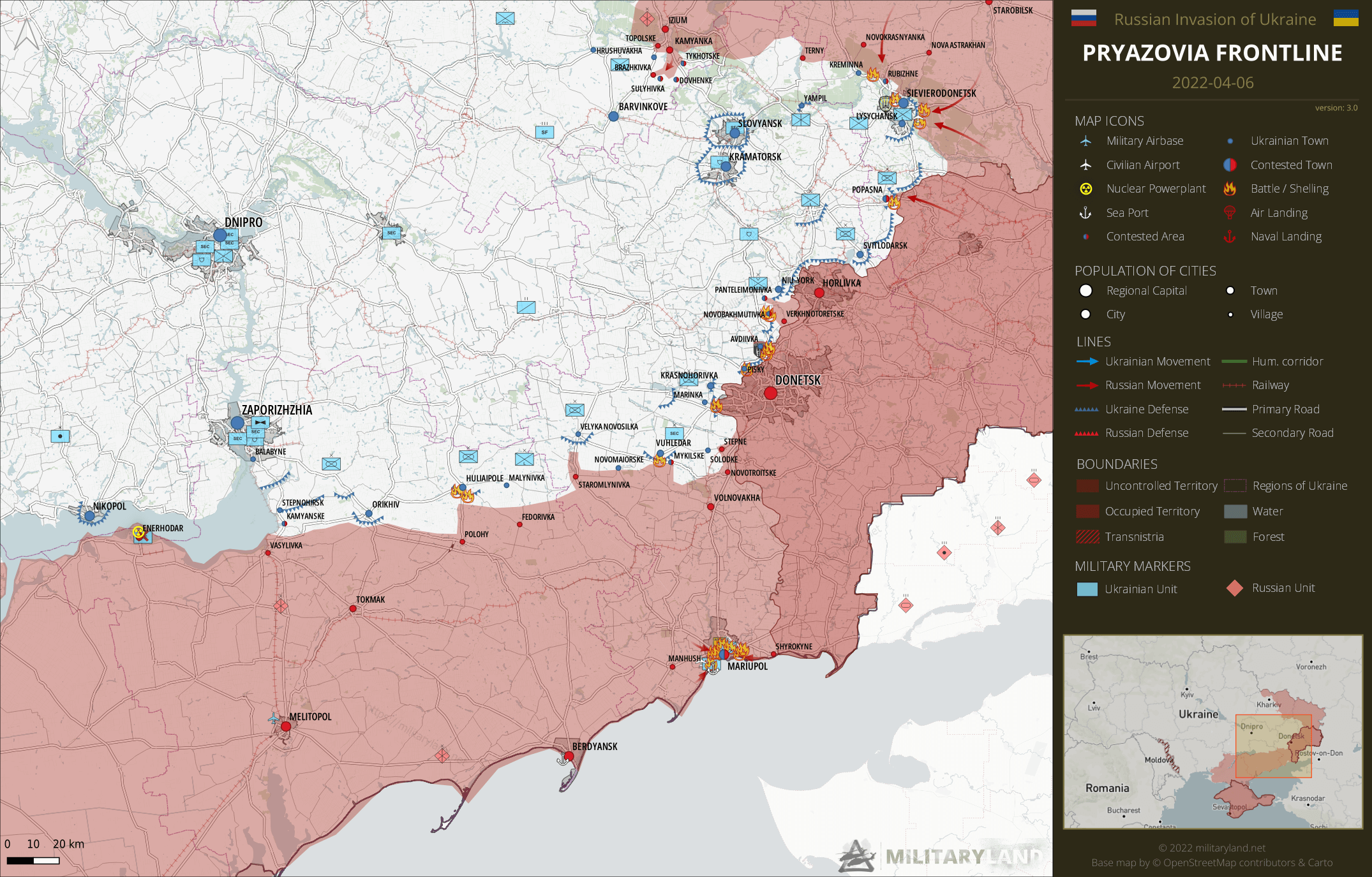 Russian forces shelled Vuhledar, Marinka, Pisky, Avdiivka and Novabakhmutivka. Russian media claims its forces fully captured Novobakhmutivka, but Ukrainian side didn’t it confirm and there is no proper visual confirmation. 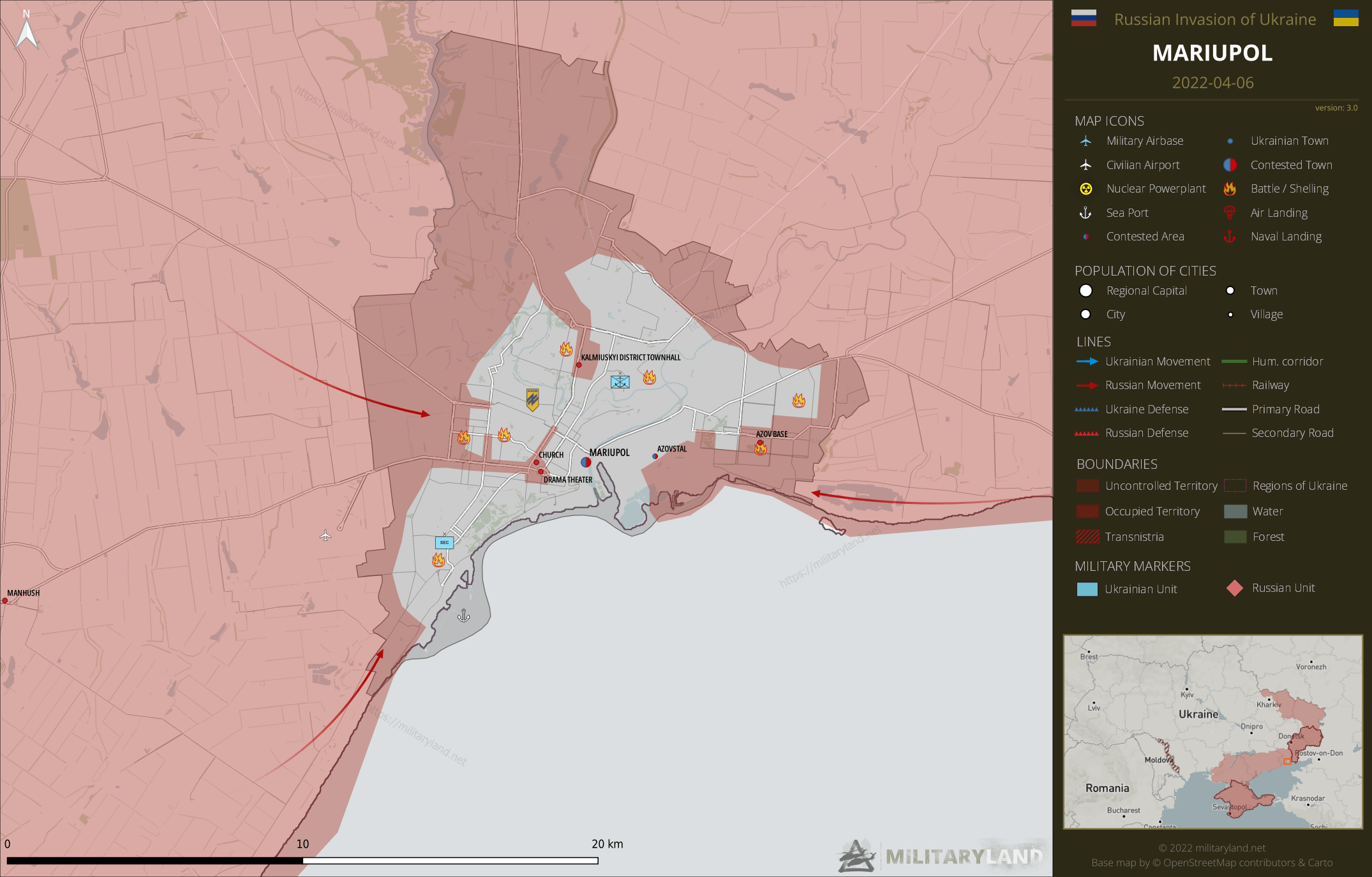 Russian forces captured a building of regional SBU and building of Prosecutors office in the center of Mariupol. They are both located close to the Drama Theater. 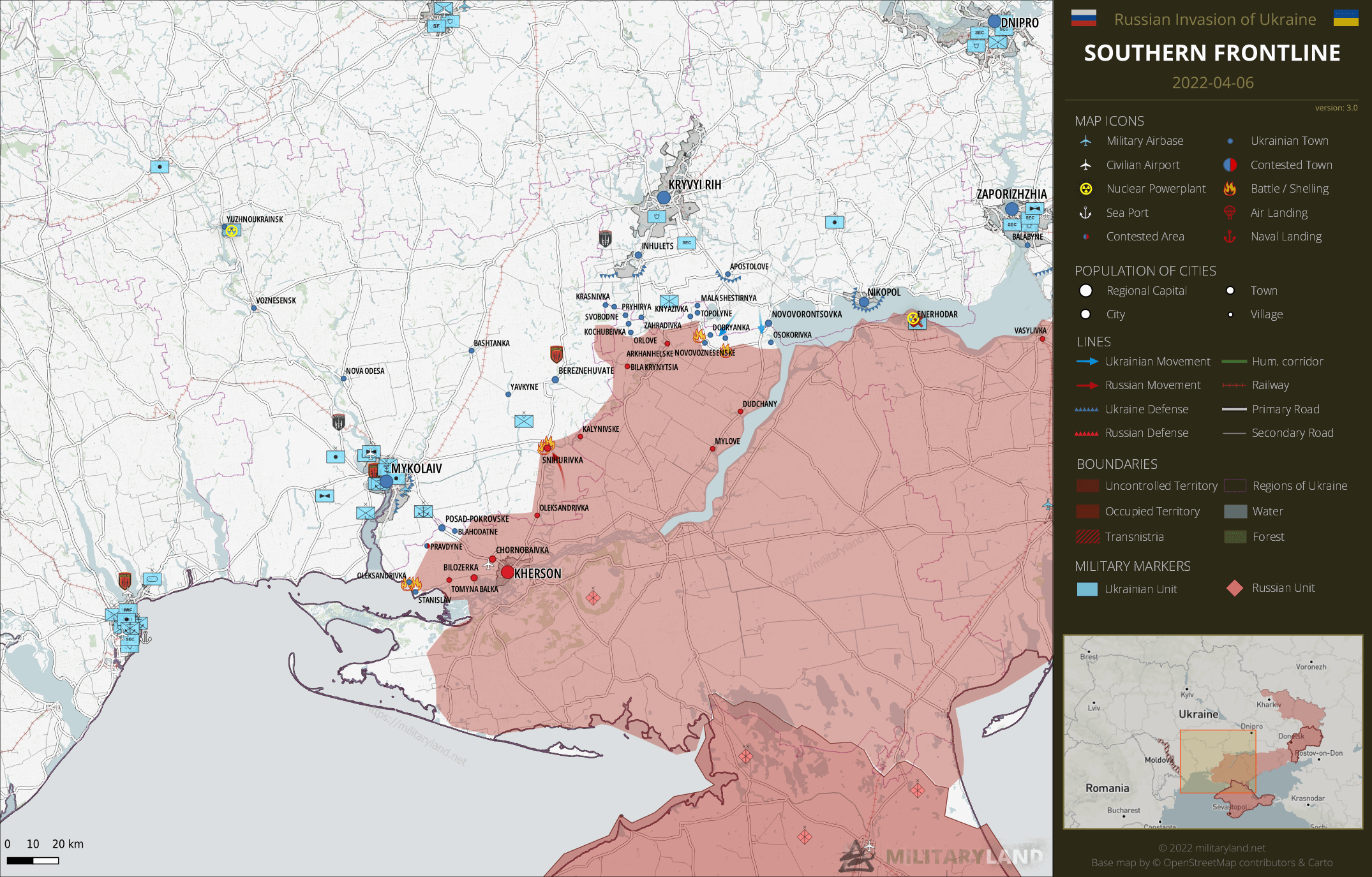 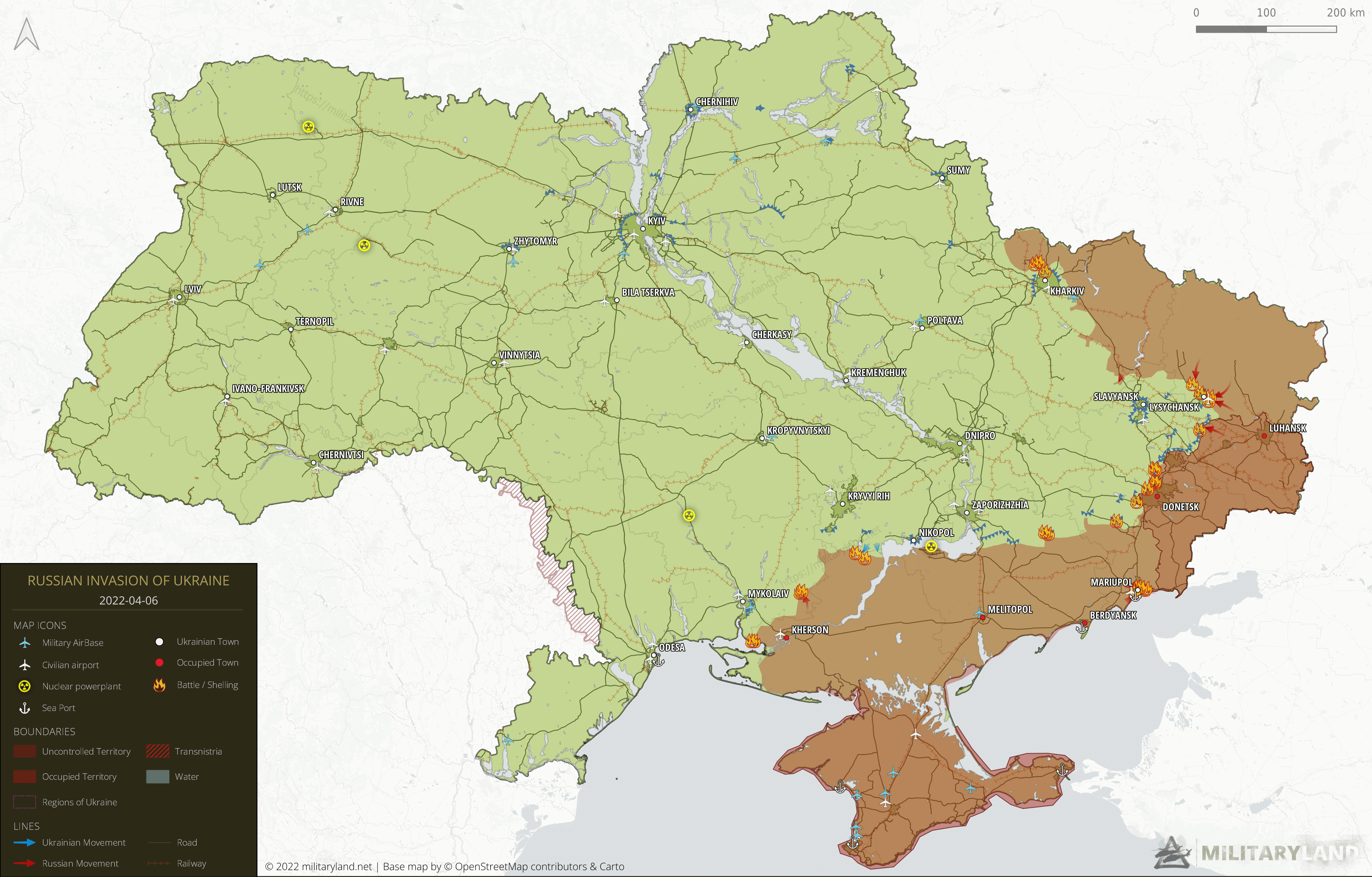 Russian troops have shelled Balaklia. This makes me think the town could have changen hands back to Ukrainians, or is at least contested.

Malinivka, near Chuguev, has apparently been re-taken by Ukrainian forces over the last days.

They didn’t, that area has been controlled for a while. Just being painted over now.

comparing the maps of the Kherson Oblast between yesterday and today, I can see RU forces have gain some ground. It is a fact ? because the text doesn’t mention that.

It’s something like: Ukraine’s never stepped into that city but Russia had left it
https://twitter.com/Militarylandnet/status/1511605819485396993

The state of the mentioned area wasn’t known, and neither side reported on it. However, considering Ukrainian forces regained control of some villages in this area, it’s safe to assume it’s under Russian control.

Consider it as a correction. I added mention to the summary.

I also do maps of the conflict for my company, and sometime you learn that you were wrong on some long term positions, so you correct it this way, trying to stick to reality. It’s a war so sometime it’s hard to be 100% accurate 😀

don’t worry I understand, “errare humanum est”. Plus you have to deal with the fog of war… also I remember that one of my teacher (like ~20 at the seconday school) told us, no map can be 100% accurate, they are a representation and he told us he was paid to teach us how to read them. Since in communication people says that you should talk about your victories and avoid talking about your failures,… Read more »