Russian army continues to move its forces to eastern parts of Ukraine. Russian troops have reached the city center of Popasna, but they remain to be unable to advance further near Rubizhne and Lysychansk. 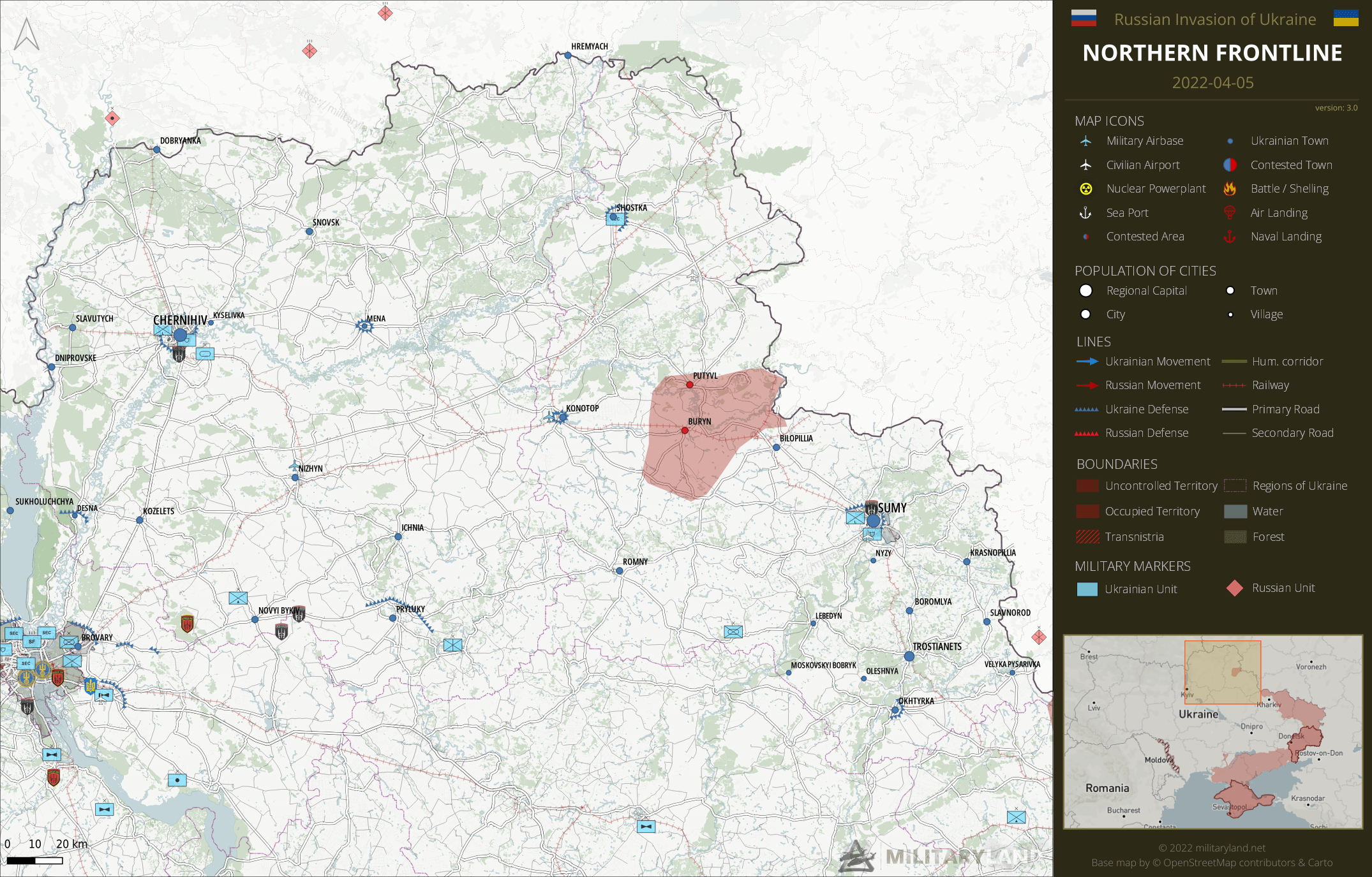 Ukrainian forces have continued to clear out the forests and the border areas.

Russian forces had been seen withdrawing from Putyvl and Buryn, but Ukrainian forces haven’t entered the said towns yet. 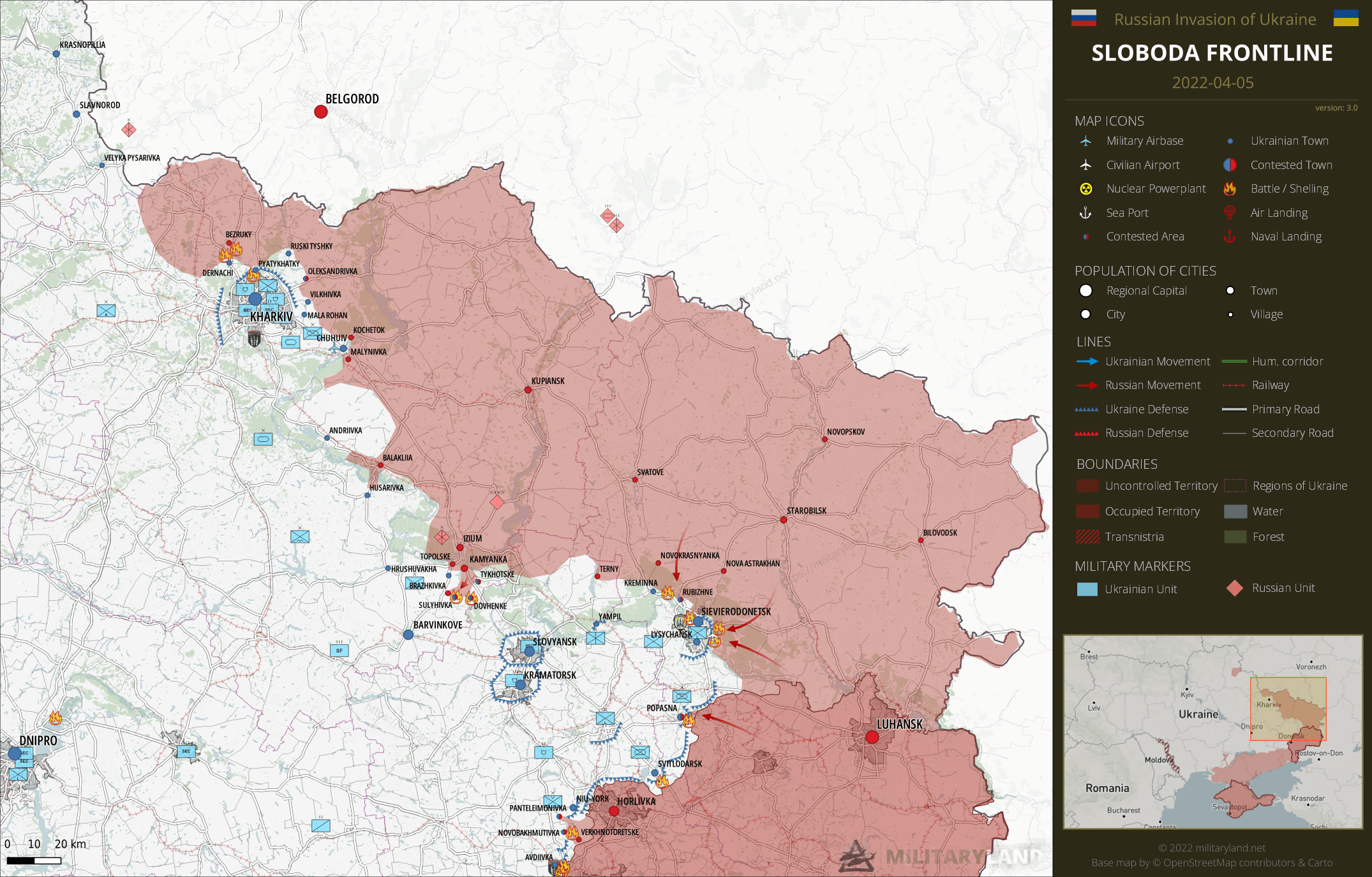 Ukrainian troops ambushed a Russian convoy in the direction of Barvinkove, and they have reportedly stopped the advance of Russian troops in this direction. Russian forward elements have reached Sulyhivka and Dovhenke, but we cannot confirm or deny if they gained full control. The Russian army shelled the outskirts of Kharkiv, causing damage to civilian structures.

Russian troops have reached a train depot in the center of Popasna. The northern and western part of the city remains in Ukrainian hands. Heavy fighting was reported from Rubizhne and Lysychansk. No significant advances reported from the area. 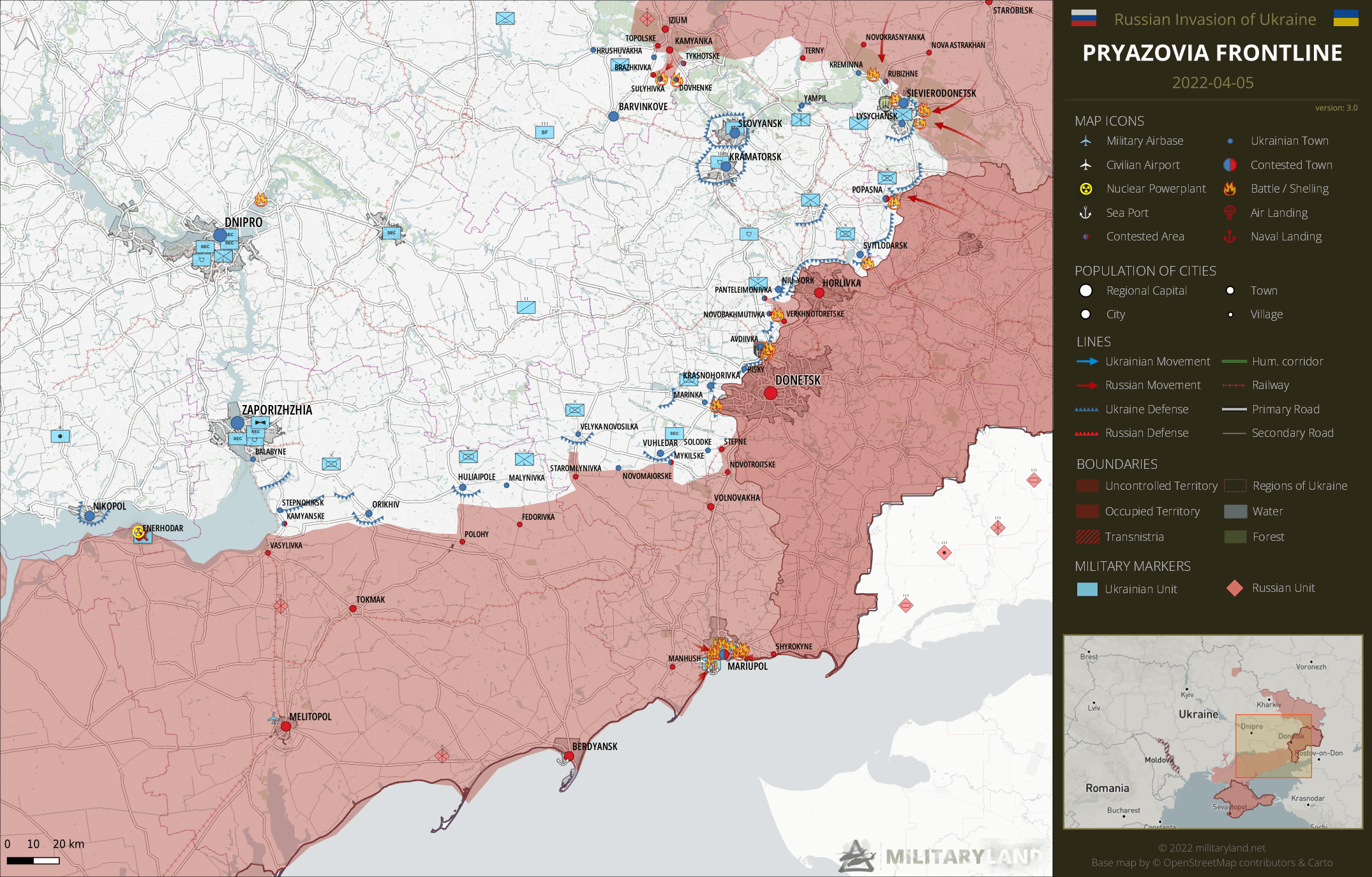 Russian army shelled Avdiivka and Marinka, but there hasn’t been any change on the ground. 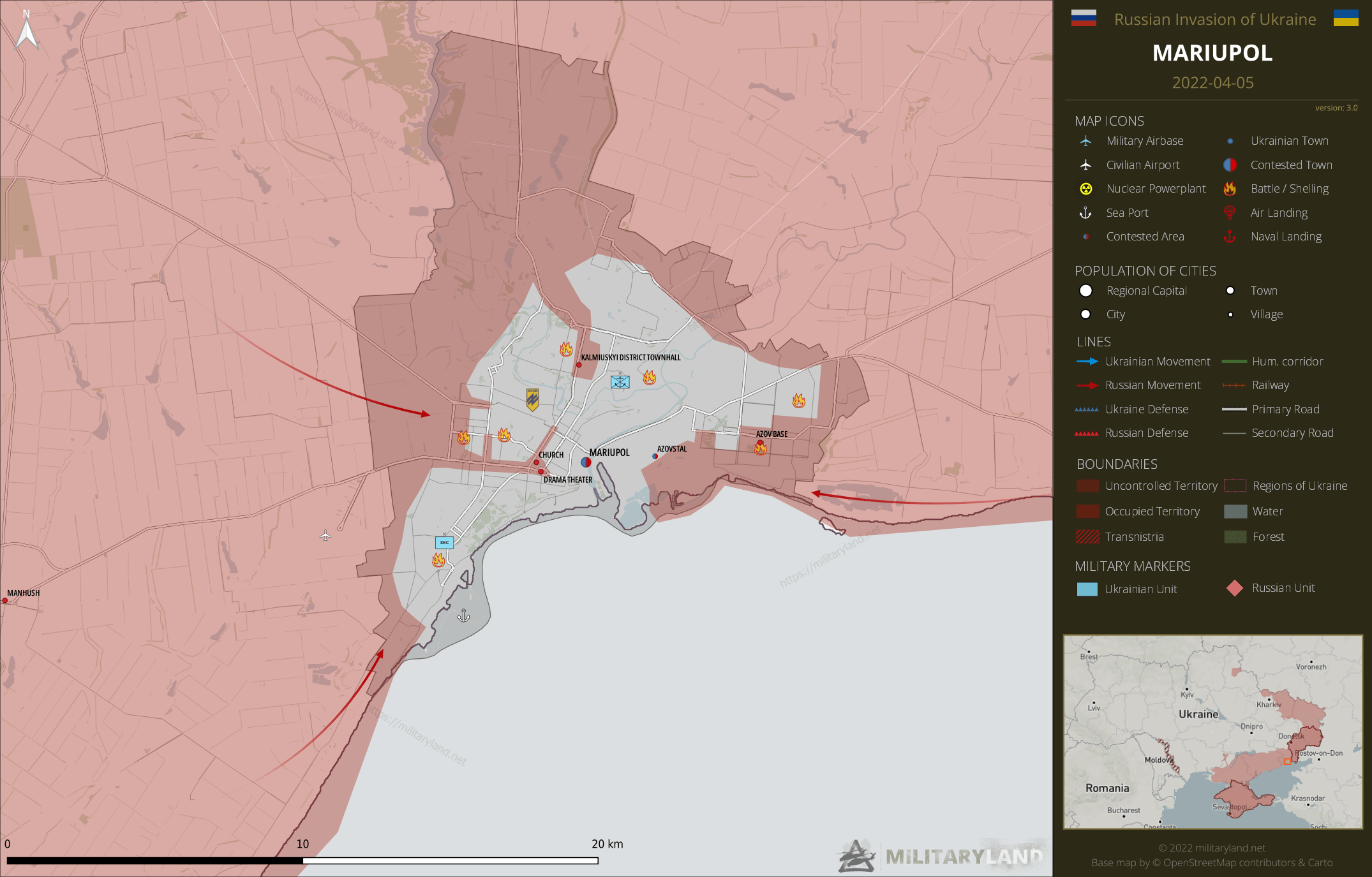 Ukrainian 503rd Marines Battalion denied Russian claims of their surrender in Mariupol. Whatever the video was fabricated or not remains unknown at this point. 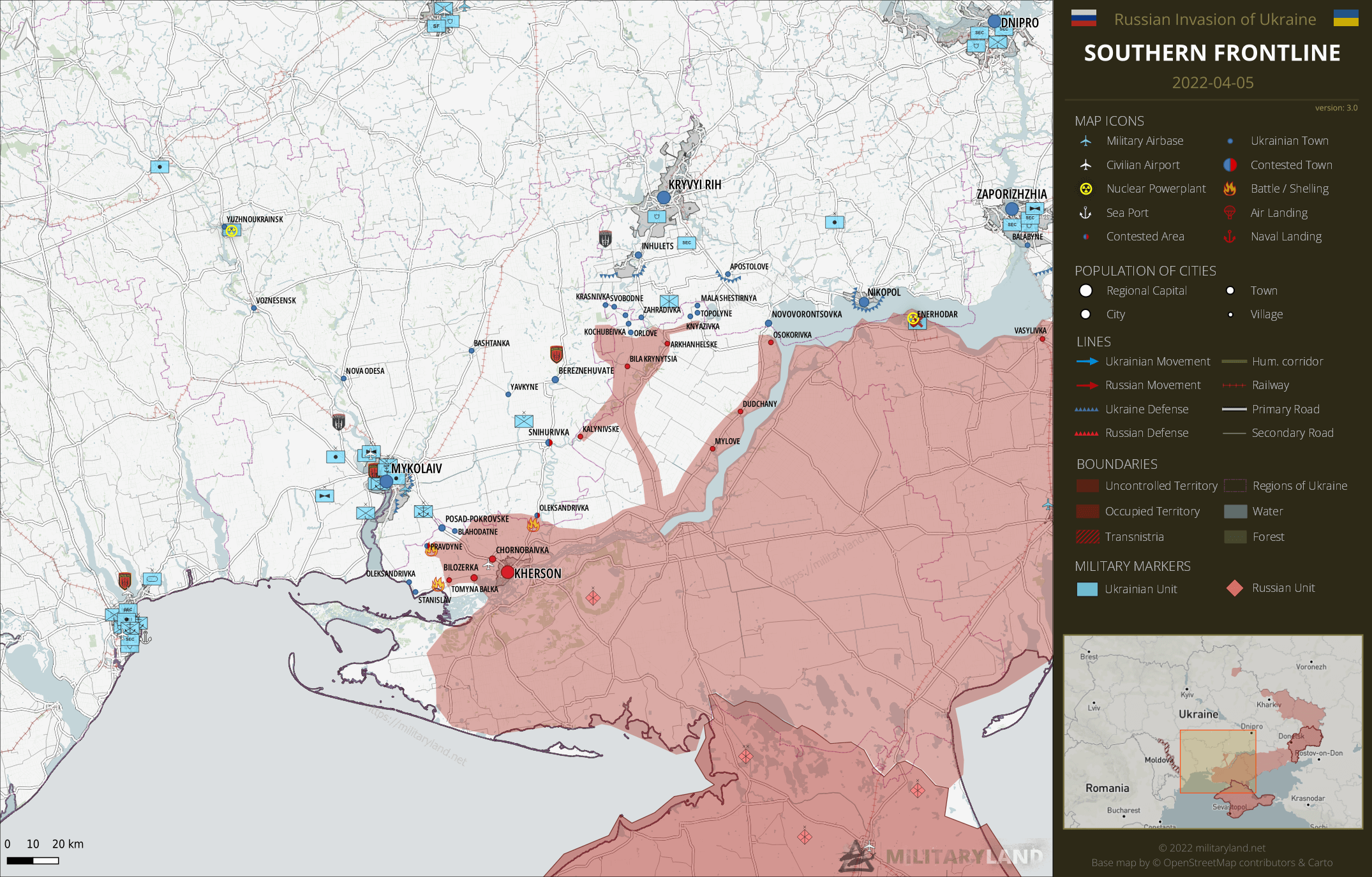 The village of Pravdyne was heavy shelled during the day (unknown by whom). Local council reports that 90% of houses were damaged. 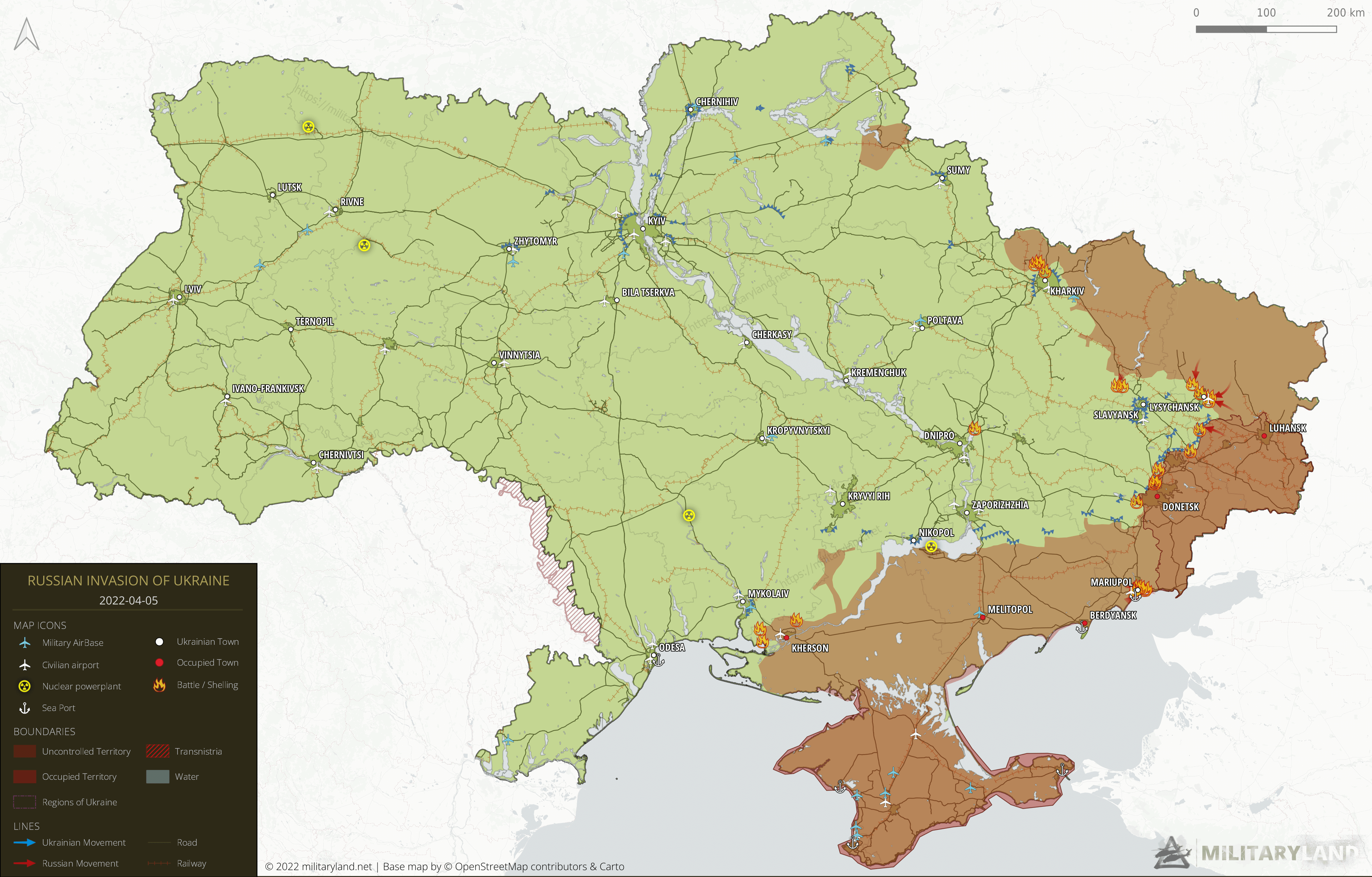 “Ukrainian 503rd Marines Battalion denied Russian claims of their surrender in Mariupol. Whatever the video was fabricated or not remains unknown at this point.”

It was 501st Marines Battalion, confirmed by Ukrainian volunteer
https://inforesist.org/zakonchilis-boepripasy-v-mariupole-bolee-200-morpehov-vynuzhdeny-byli-sdatsya-v-plen/

As the fighting is moving fredominantley to the eastern front around S;avyansk and Kramatorsk, could you add some other key cities on the regionl such as Pokrovsk and if the Russian forces advance westwardly, Pavlograd. Thankyou

There were no Russian troops in Sumy region on April, 5

I love the work you are doing, keep it up 🙂