Ukrainian forces have reached the border in Chernihiv and Sumy Oblast. The main focus for upcoming days is Donbas, and possibly the southern frontline. 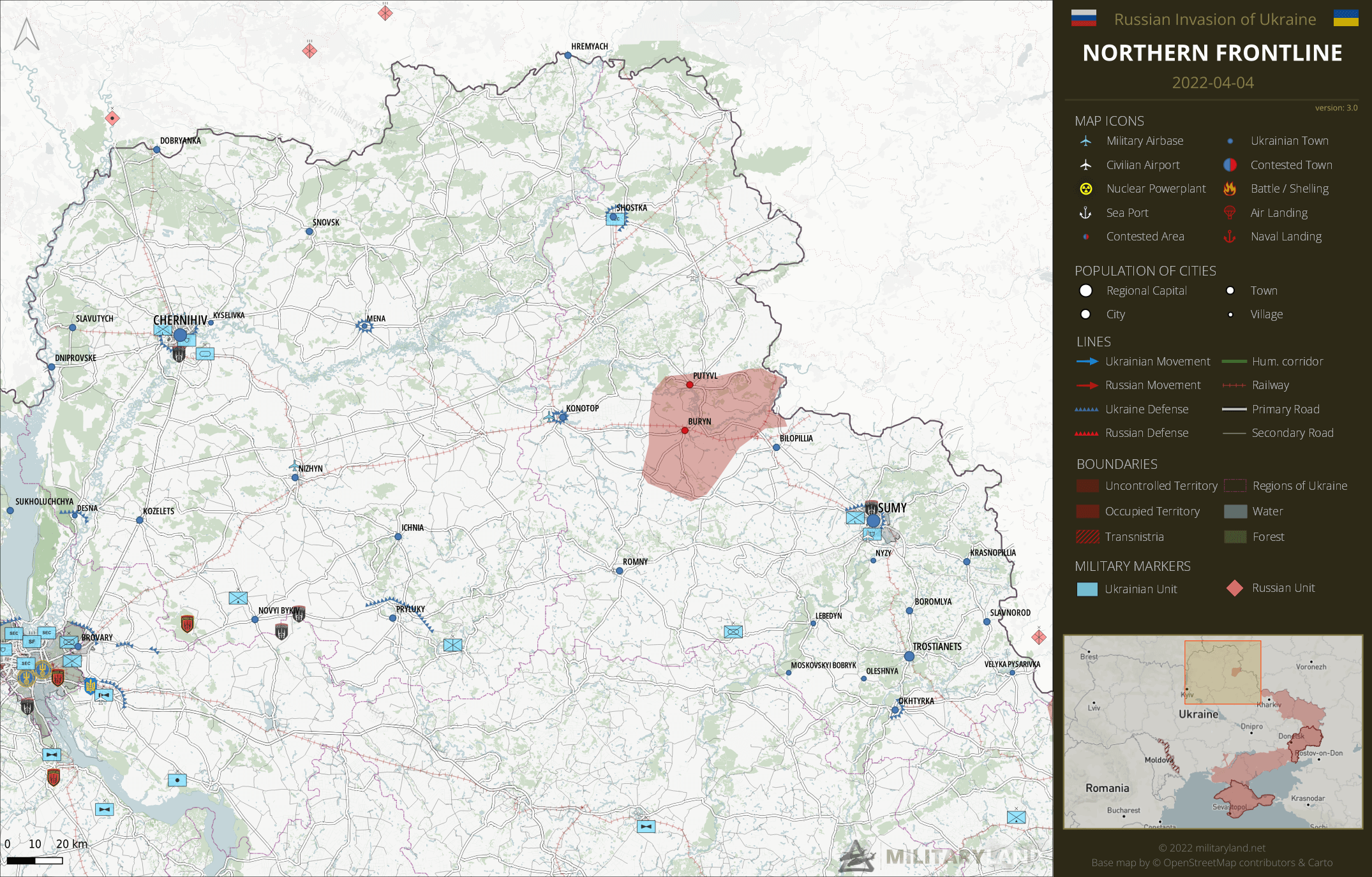 Ukrainian troops have reached the border with Belarus and Russia. The forces hoisted Ukrainian flag at Dniprovske, Dobryanka and Hremyach border crossing.

Ukrainian Army has reportedly reached the border in certain areas. According to regional council, there is still presence of Russian military in the area of Putyvl, Buryn and north of Romny. Bilopillia has been liberated and the train line Bilopillia – Sumy – Troistanec is working again. 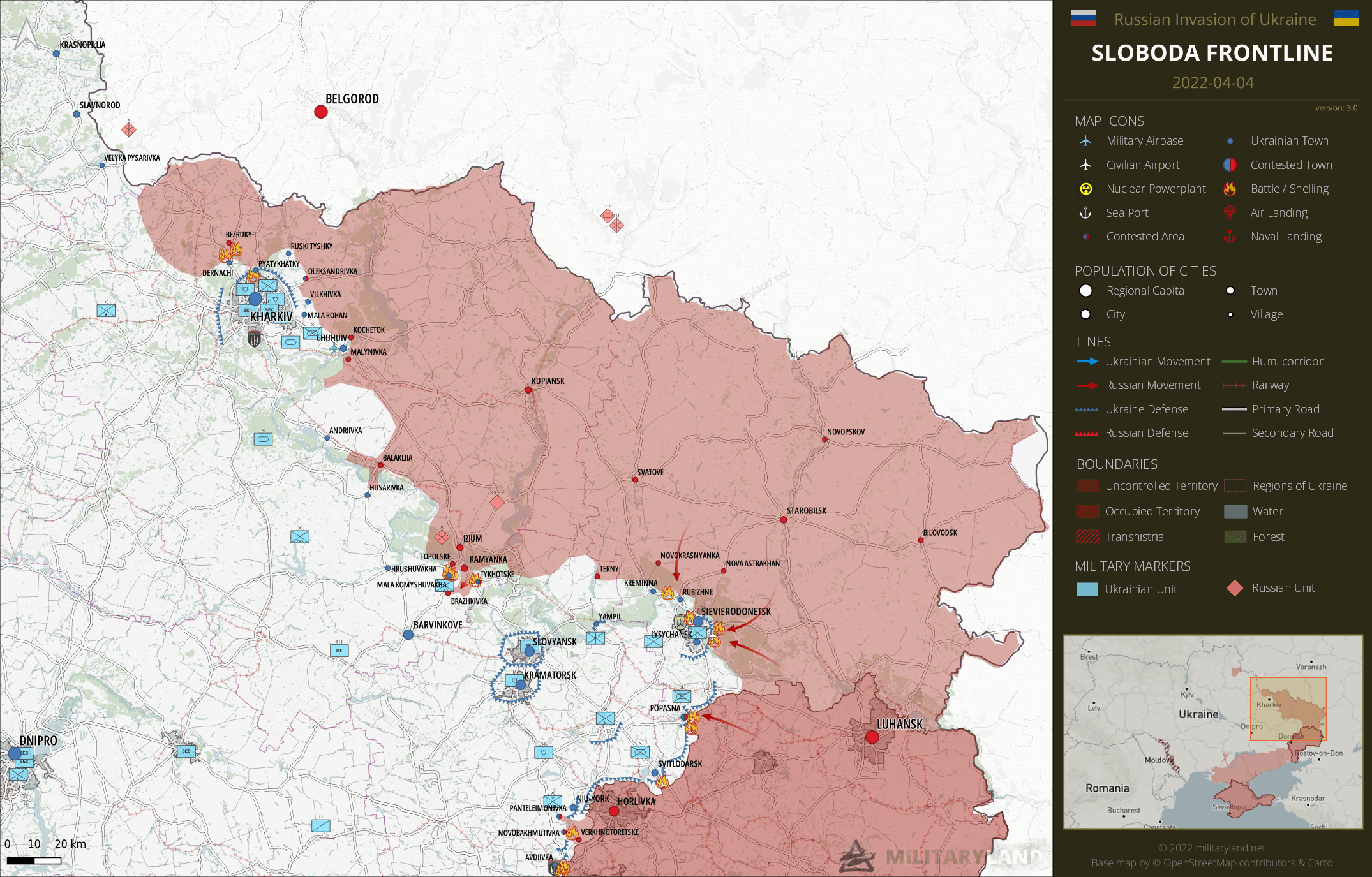 Russian forward elements have reached Brazhkivka and established a defensive position in the village. The enemy concentrates a large amount of forces in the area of Izium, prepares for the push towards Slovyansk.

Russian Army focuses all its forces in the area to capture Rubizhne, Sievierodonetsk, Lysychansk and Popasna. 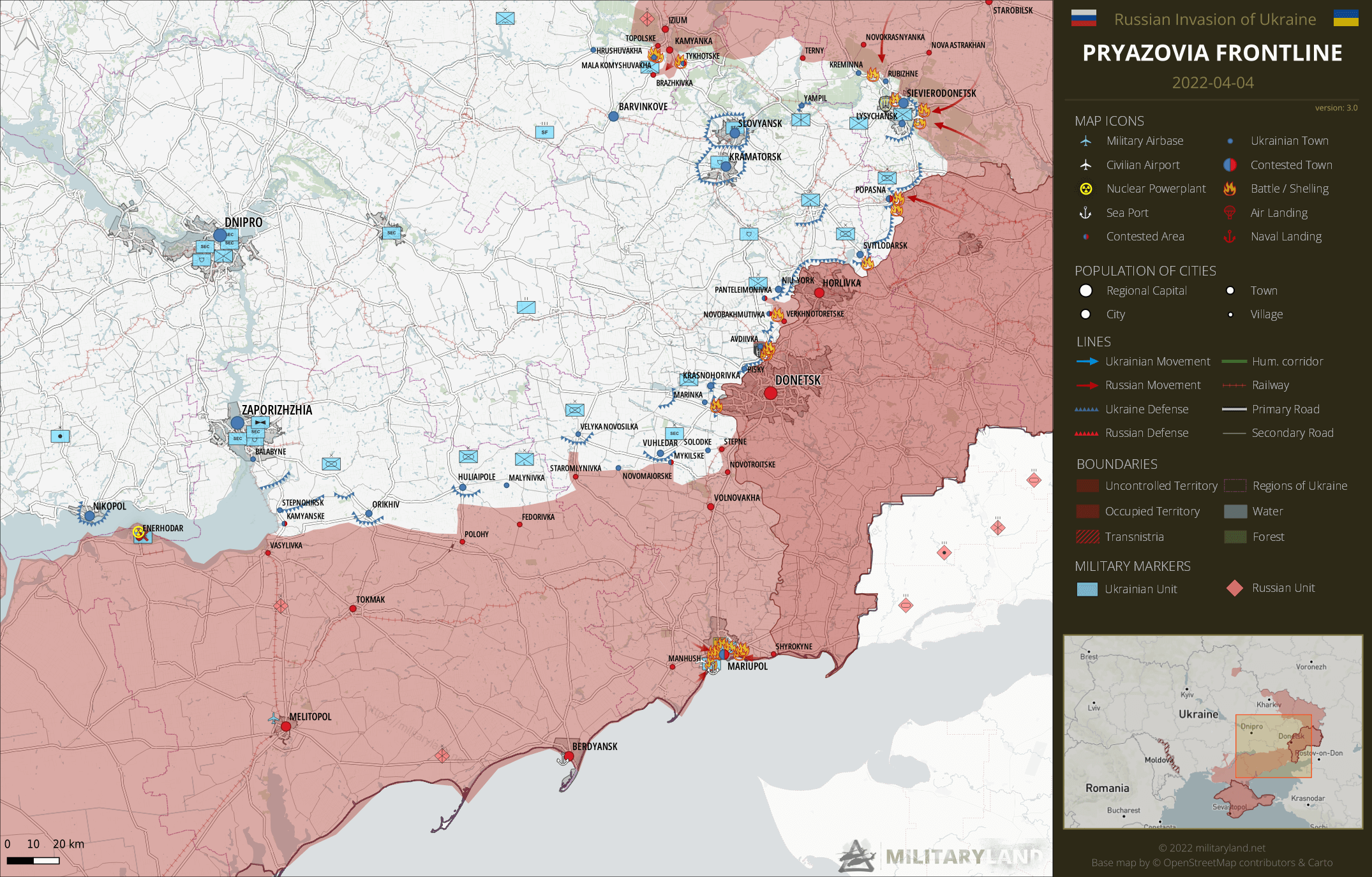 Ukrainian troops successfully repelled attacks near Marinka, Makiivka and Svitlodarsk. Russian troops entered Novobakhmutivka and control at least a portion of the village. 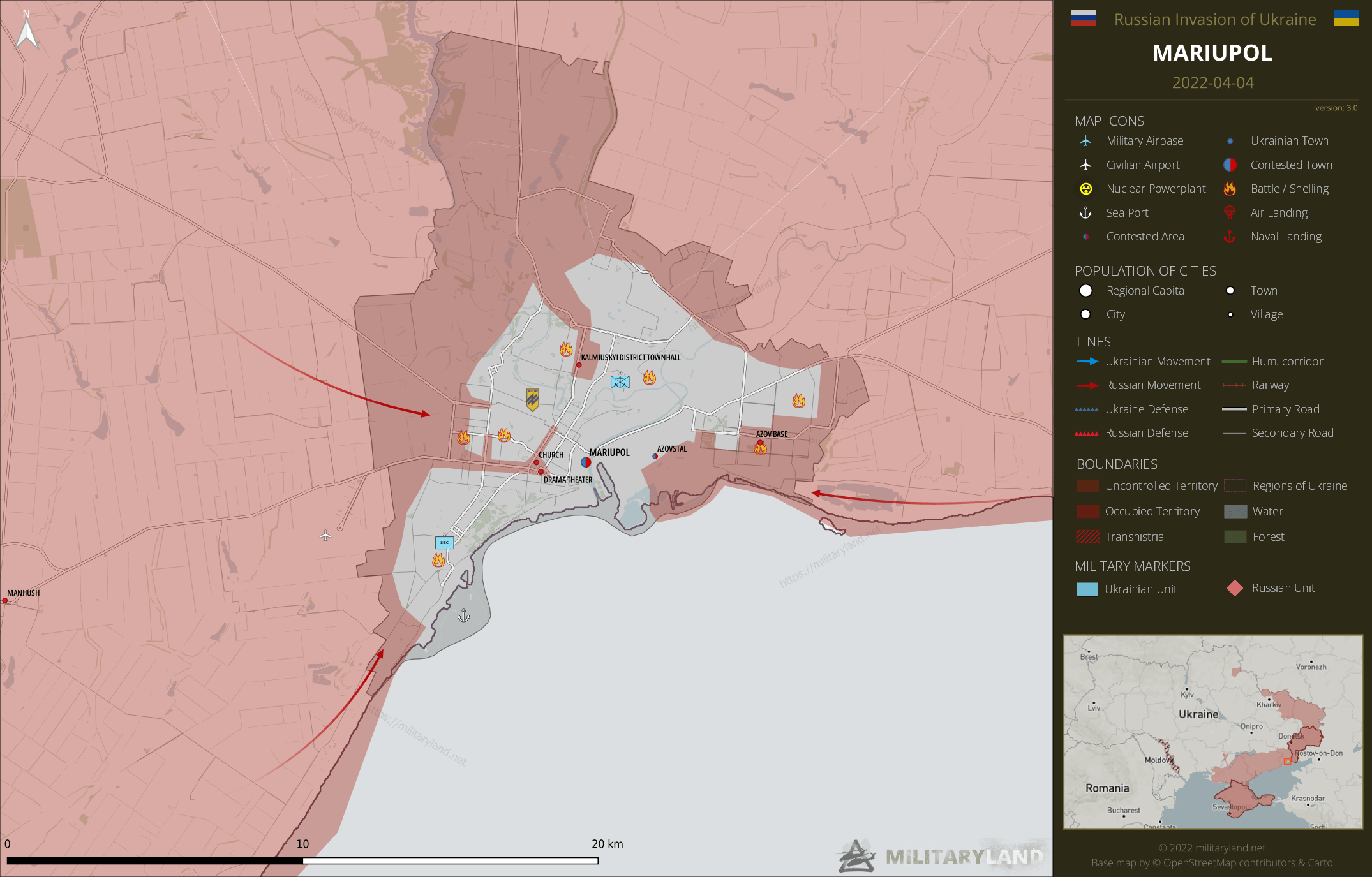 Russian media claims that more than 250 Ukrainian marines of 503rd Marines Battalion surrendered in Mariupol today. It might be real, but also a fake video. We’ll have to wait to find out. 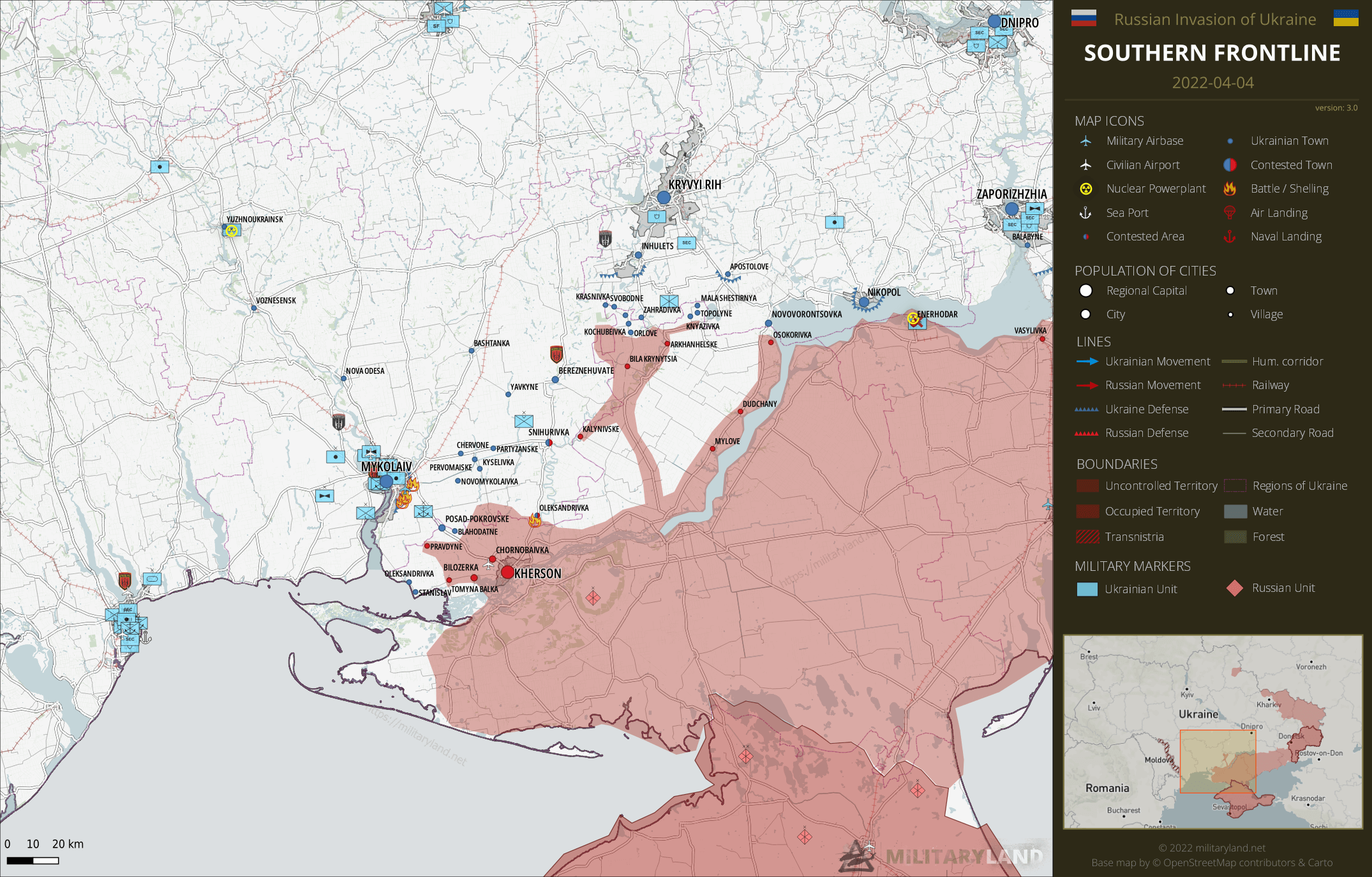 Ukrainian troops have been reportedly pushing towards Kherson from the area of Blahodatne and Oleksandrivka. 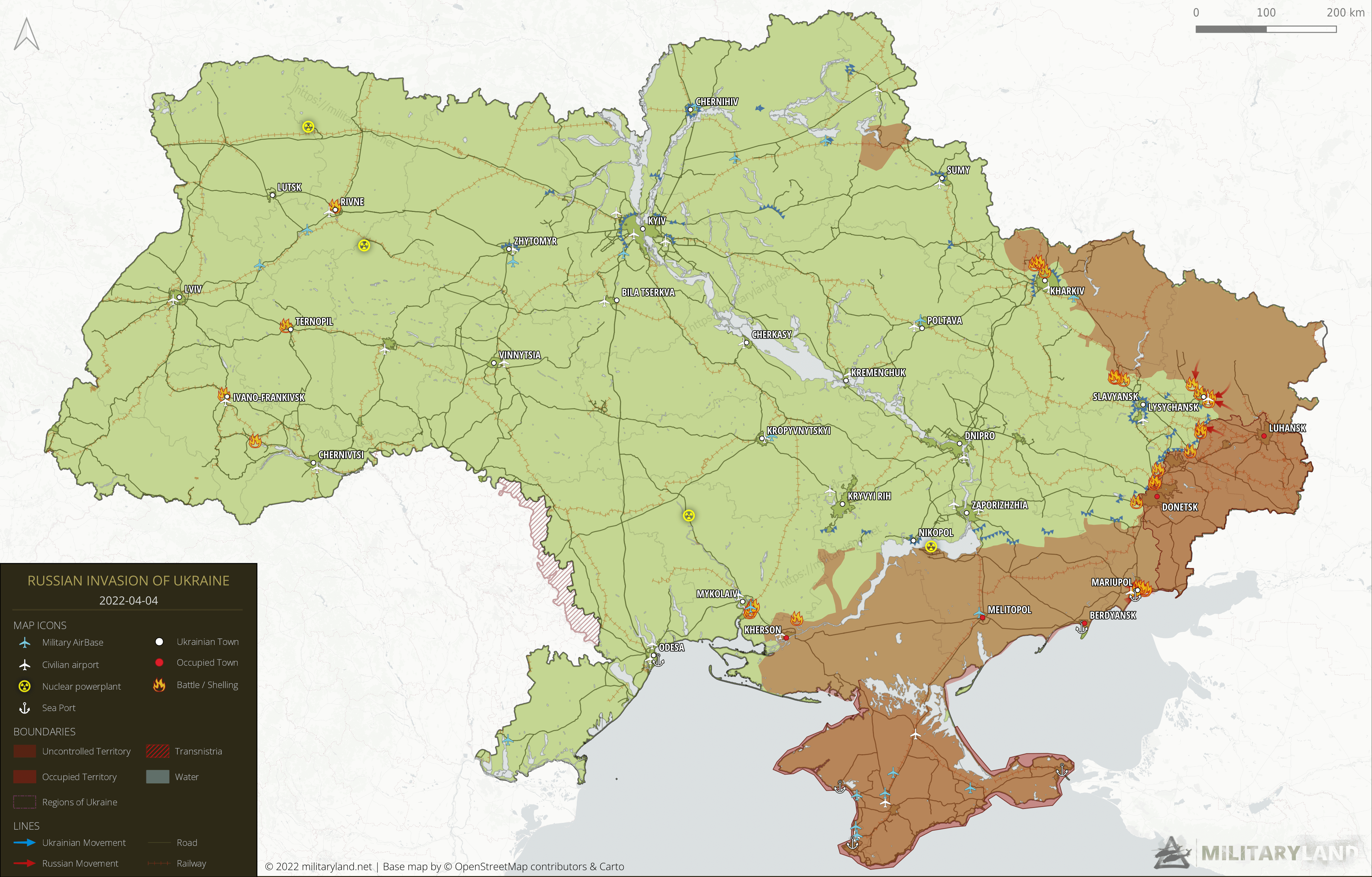 The surrender of marines in Mariupol looks legit. According to some sources it’s 501th Marines battalion (501 обмп) not 503

There are some counts that make it look legit (the inherent plausibility of soldiers surrendering after this much fighting in desperate conditions, men are wearing Ukrainian equipment), others that make it look faked (the troops look fresh, the troops appear as though they haven’t been properly disarmed and frisked, there are no wounded, etc). And for either possibility, you can come up with plausible-sounding explanations to explain the apparent discrepancies (equipment looted from captured headquarters,… Read more »

actually, in other video they even shown one of captured woman soldiers, but she was captured on 23.3… so it looks like a fake video made with already captured people and some Russian/DLR troops pretending to be Ukrainians (clean white sneakers on their feet, one even had grenades with him)…

agreed and the video you are referring to was obviously staged for the media. But there is plenty of evidence that the surrender did happen. Russian war correspondent Sladkov filmed the actual event, it took place at night with all the frisking, disarming etc
t.me/Sladkov_plus
Naturally all can be fake but it seems plausible

Your email address will not be published. Required fields are marked lol it will not be checked for valid domain either crap

@ militaryland: I have been following your summary for several weeks. There are several videos on social media showing russian troops withdrawing the city of Buryn. I have watched three videos in total, all from the city of Buryn. These were large russian columns that left the town. I guess we will have more detailed information on the presence of russian troops in this specific area soon. Thanks again for your work. Appreciate it.

? you have two Oleksandrivka’s near Kherson ??

one north, one west??

Yes, check in on google maps. There are quite a few Oleksandrivkas in Ukraine

You should probably turn off the comments here. People are idiots.

Totally agree mate, the reports are amazing but the comment section is pure shit in general. They must be bots or people without brain cells.