Ukrainian forces have reached the border with Belarus in Kyiv Oblast and regained control over the most of Chernihiv Oblast.

The Russian army has confirmed the change of tactics by its actions during the past two days. They have continued to hit strategically important locations across Ukraine and focused the ground operations primarily on the area of Donbas. 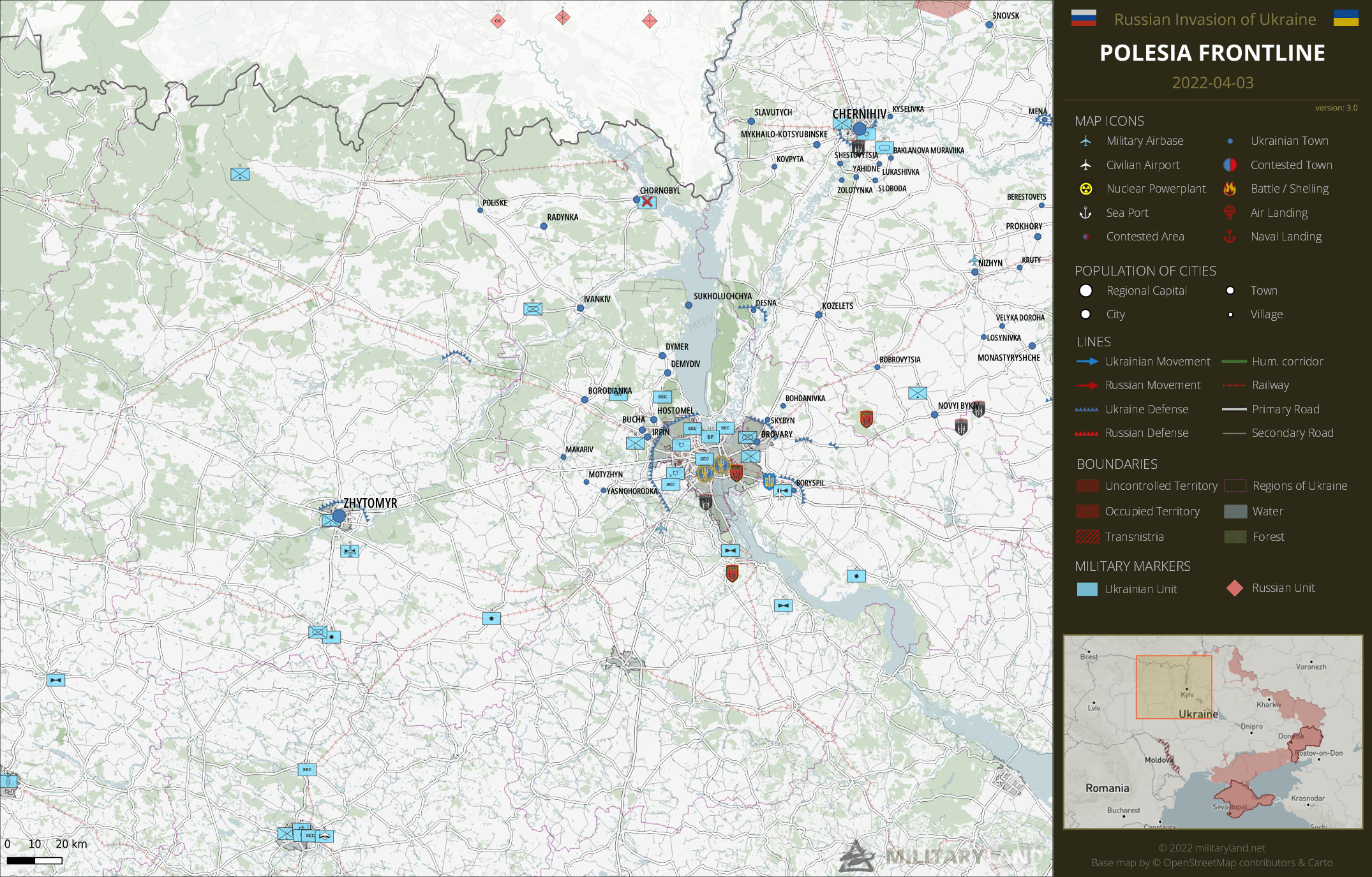 Ukrainian troops have secured the border with Belarus and hoisted the Ukrainian flag at Chornobyl plant. 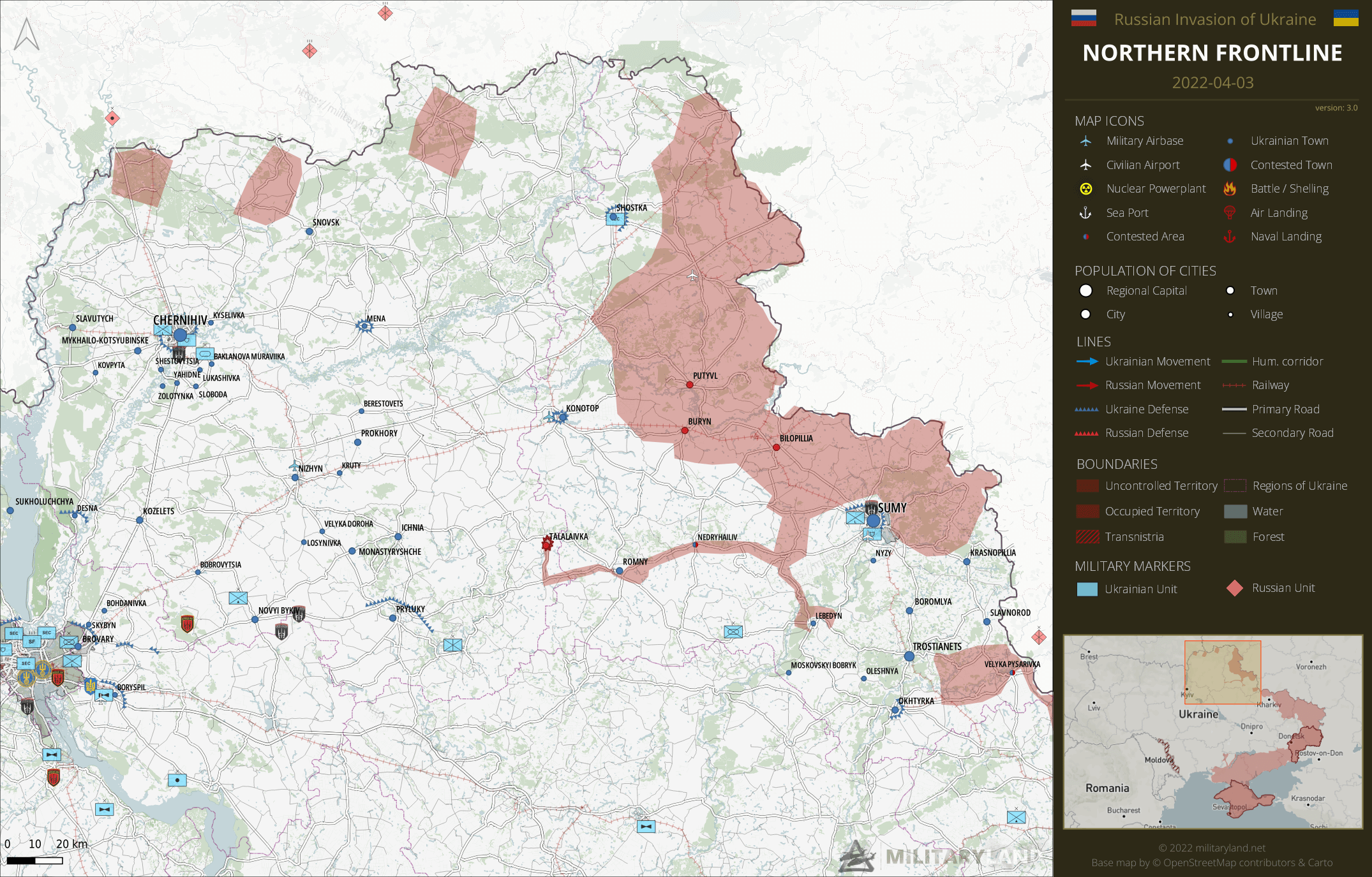 Ukrainian General Staff reported that all Russian troops have withdrawn from the Chernihiv Region. However, the regional council indicated there are still some Russian elements scattered in the north, probably near the border.

Russian forces have reportedly begun to withdraw from Sumy Oblast across the border to Russia. Ukrainian troops liberated the vicinity of Konotop. The remaining Russian units are concentrated in the area of Putyvl, Buryn and Bolopillia.

The areas of Talalaivka, Romny and Lebedyn are most likely under Ukrainian control. I’ll try to verify it tomorrow. 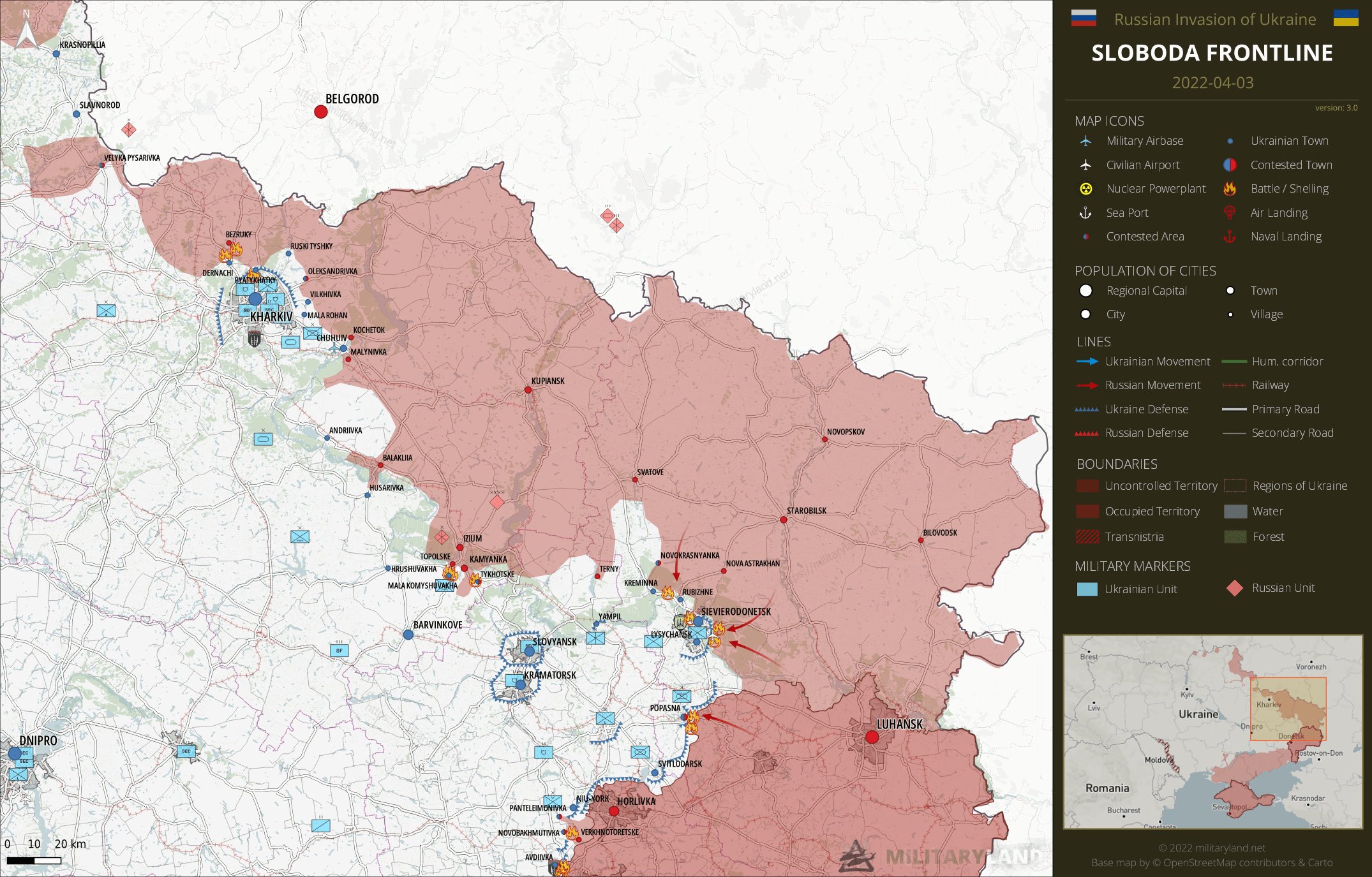 Heavy fighting was reported from the area of Mala Komuyshuvakha and Tykhotske. Russian army bombed Kharkiv outskirts and caused damage to residential areas.

Russian Army focuses all its forces to capture Rubizhne, Sievierodonetsk, Lysychansk and Popasna. 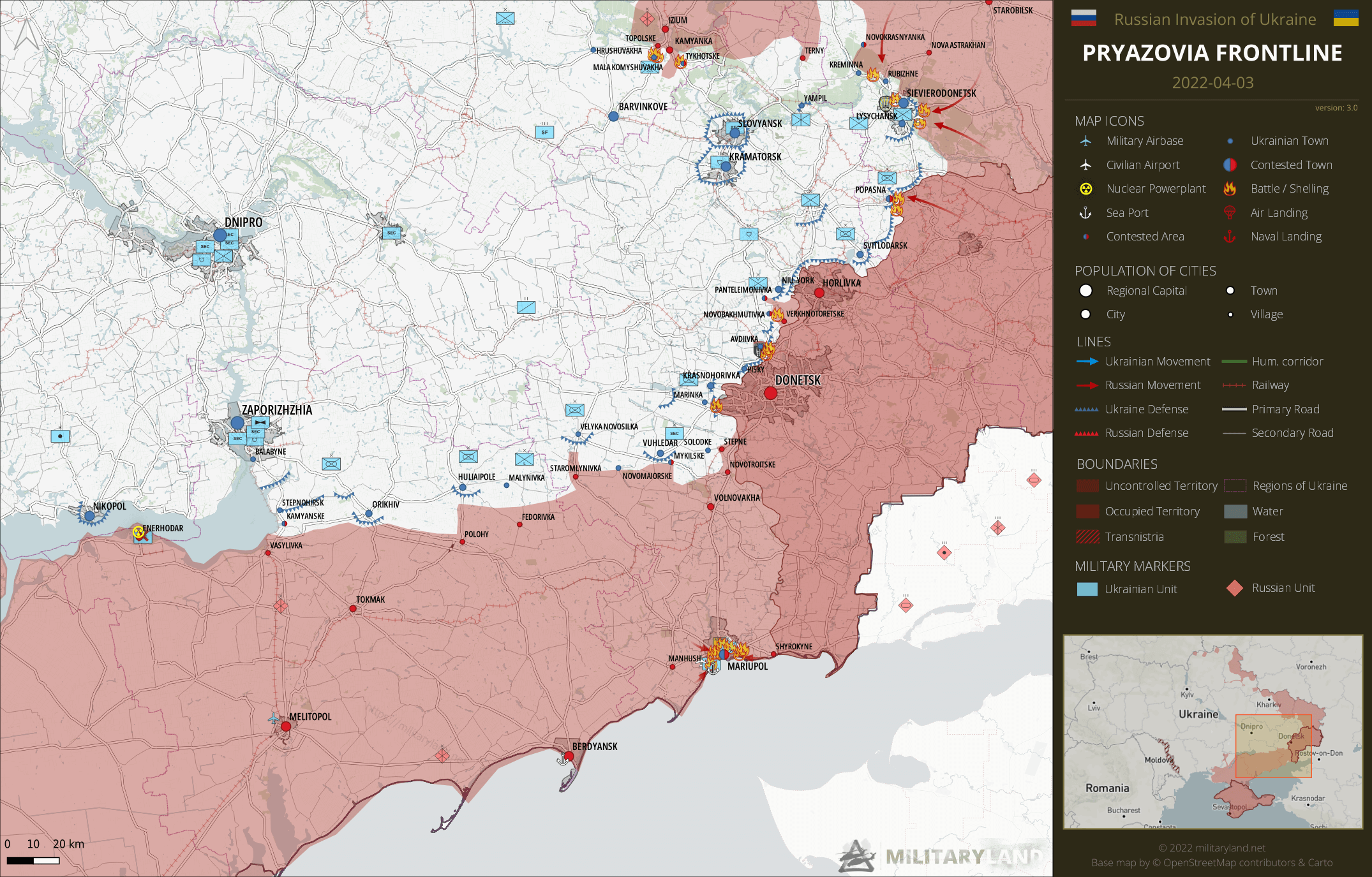 Russian troops attacked Ukrainian positions near Avdiivka and Marinka, without success. The enemy has reached the outskirts of Novabakhmutivka and entered the town. 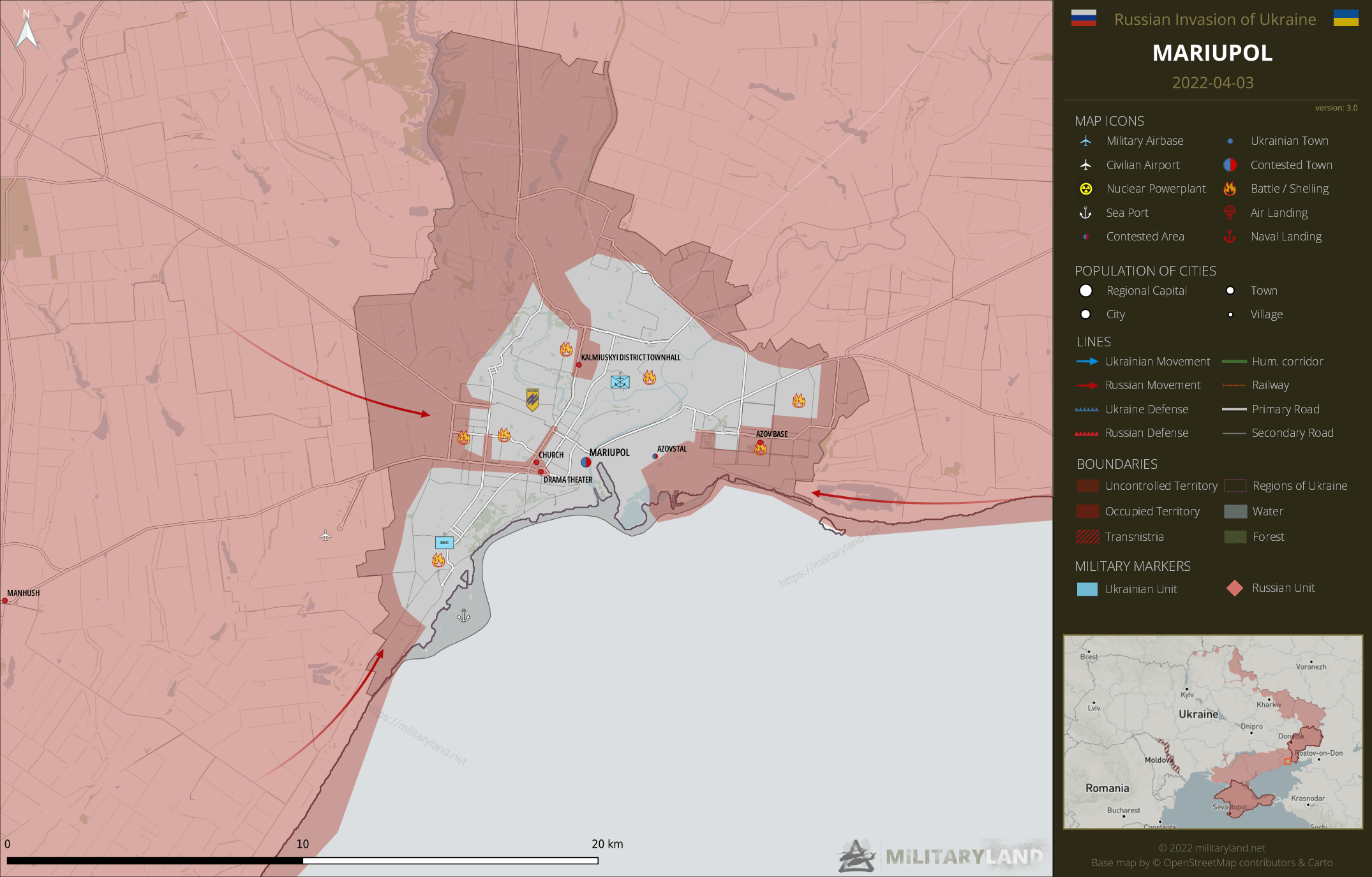 Ukrainian forces still control the part of Azovstal plant, the southern area near harbor and the northern parts. 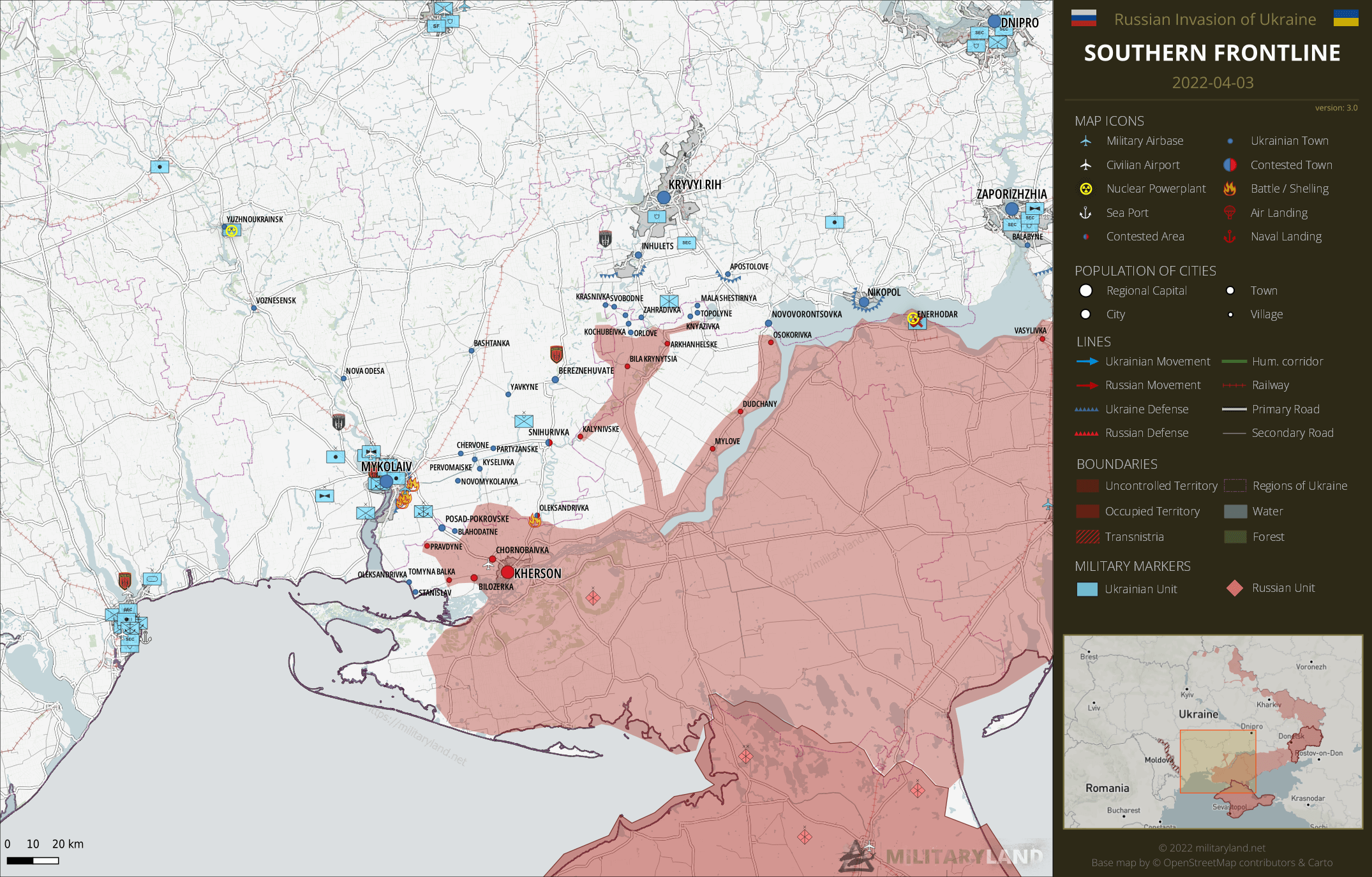 Ukrainian troops have reached Oleksandrivka on the regional border of Kherson and Mykolaiv Oblasts. Russian army bombed Mykolaiv outskirts in the evening.

There was no change on the ground in Dnipropetrovsk Oblast. 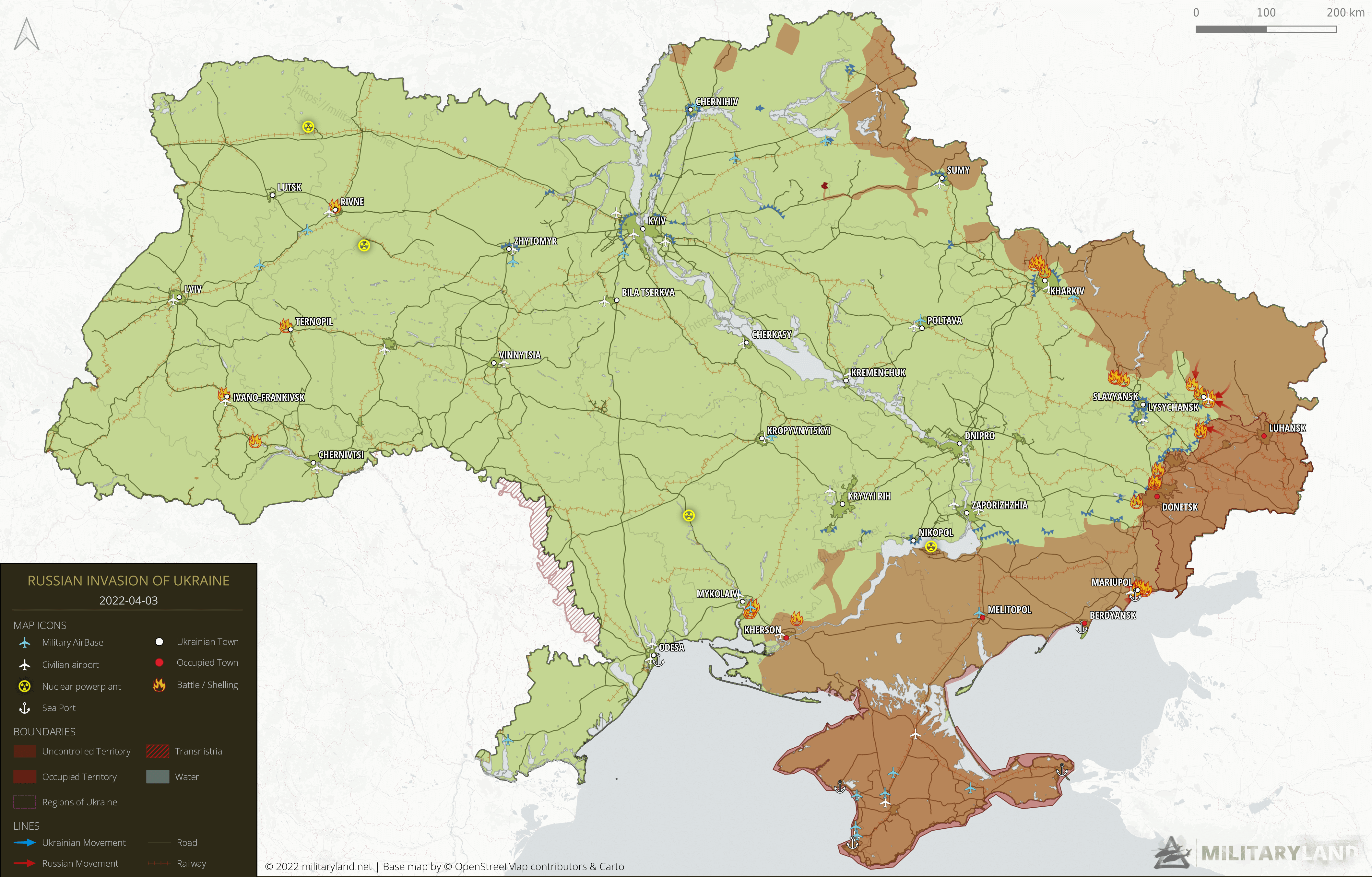 @TONY No problem, apology accepted. The force around Kiev wasn’t never sufficient enough to take it in the first place. We’ll see soon enough how it plays out

The following serves as indirect confirmation that it is premature to remove all the “red” already from Chernihiv region. Albeit the area where the incident happened was already re-coloured “white” on your map.
Seems pretty difficult to me to figure out where Russian troops still are, and where they already have left. We’ll probably have to live with imperfect mapping of the situation in NE Ukraine for a few more days.

1. Note that recent Ukrainian briefings on FB have mentionned ongoing fights in the Southern Bug area for Olexandrivka. I take that as an implicit confirmation that Stanislav has changed hands back to the Russians. Pro-Ukrainian telegram channels from Cherson on Saturday showed pictures of a Red Cross convoy bringing inhabitants of Stanislaw to Cherson city. 2. This morning’s Russian briefing on FB reported full control over Novobahmuta, and having blocked Новотошковское from the East… Read more »

HI. Near Mykolaiv and Kherson region it is a chanse to UAF to cut off some ruSSians troops in the pocket assaulting Nova Kachovka dam bridge. Can UAF have enough forces in region to do that ?

The best map yet!

Do we have any idea how many troops and equipment Russia has left committed to this invasion?

you can find the last BDA (Battle Damage Assessment) here:
https://www.thefivecoatconsultinggroup.com/the-coronavirus-crisis/ukraine-context-d36
author: Colonel. David G. Fivecoat.
for example He claims that 37.2% of the MBT have been destroyed. Today I heard someone else claiming that about 40% of the russian MBT have been destroyed.

I forget to mention that those sources are independents, they show similarities, I consider their claims believable. I have no internet link for the second source

Now that Russian troops have pulled back from their front in the NE and with Kyiv, I would hope the Ukrainian MoD would be able to reallocate some brigades from other regions to bolster the defense along the Donets river and in the south now that it seems that defense of these western cities are in less immediate danger. I know the Russian withdraw still could be a feint and Ukraine would obviously still need… Read more »

I believe you’re missing the point here. The withdrawal from Kiev wasn’t the faint, the faint was ATTACKING Kiev. The important bit is that as of now Ukraine forces cannot do anything that’s not already counterchecked by Russians. The forces from Mariupol are already in the process of being relocated

Sorry AZOG, but when you muster half your invasion force to take the enemy’s capital, get bogged down, suffer horrendous losses and after having spent weeks trying to encircle it miserably fail and risk encirclement yourself, that’s not a distraction. That’s your main thrust being utterly defeated. And again, I must repeat: HALF the whole invasion force was sent for Kyiv, and it was defeated. No commander ever used half his army for a diversion.… Read more »

Why name yourself AZOG? You know that is a myth right?
They are the real deal. Good fighters and recruiting rapidly now.
They aren’t what you suggest based on your username. It is a myth.