The Kyiv Oblast has been liberated. The focus of all parties now shifts to Donbas, where the Russian Army concentrates its main force now and will attempt to capture Slovyansk and Kramatorsk. 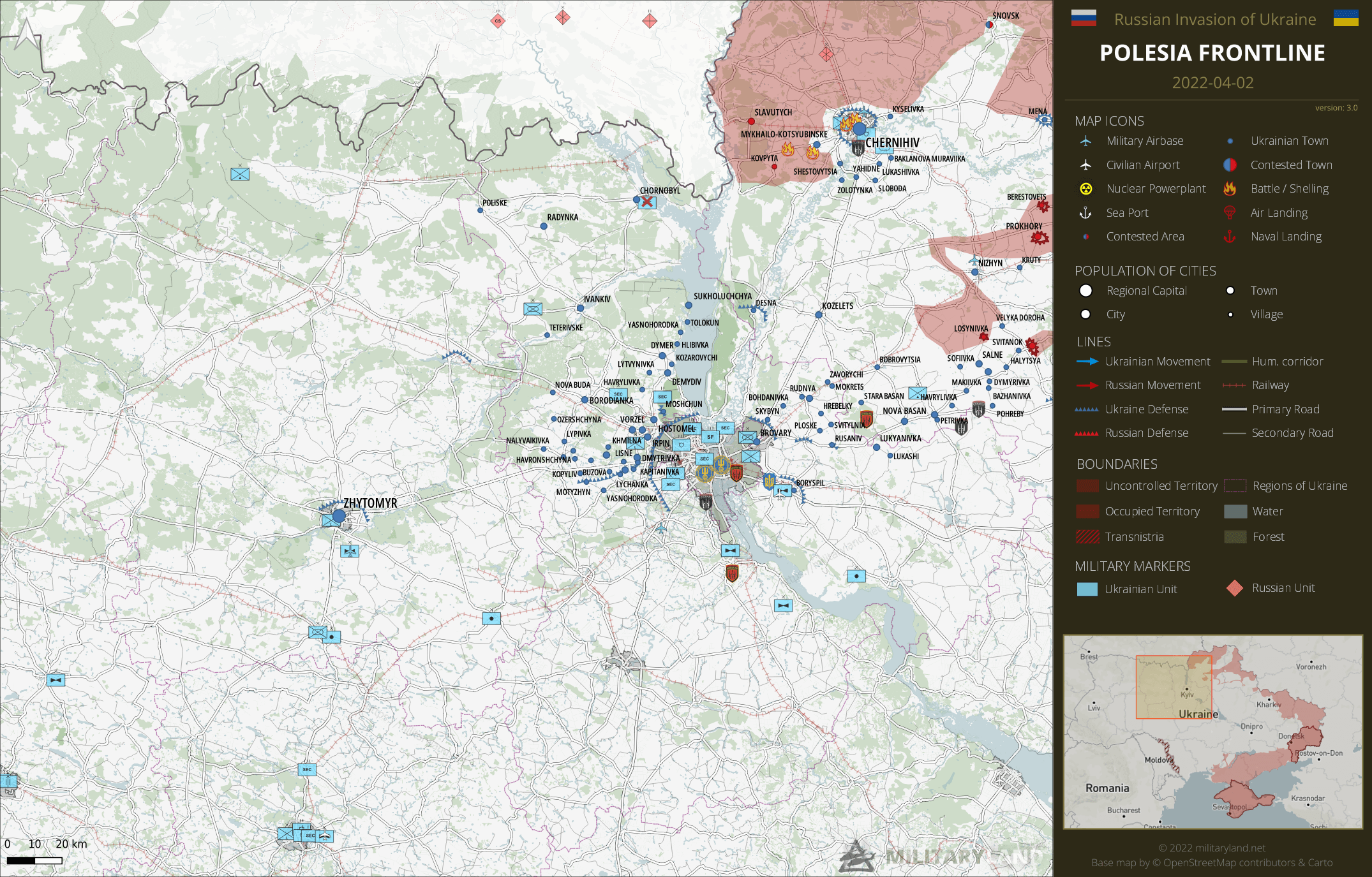 Ukrainian Defense Ministry reported the entire Kyiv Oblast has been liberated on Saturday. A footage of Ukrainian troops in Bucha shows the streets are covered by civilian corpses, some with hands tied behind their backs. 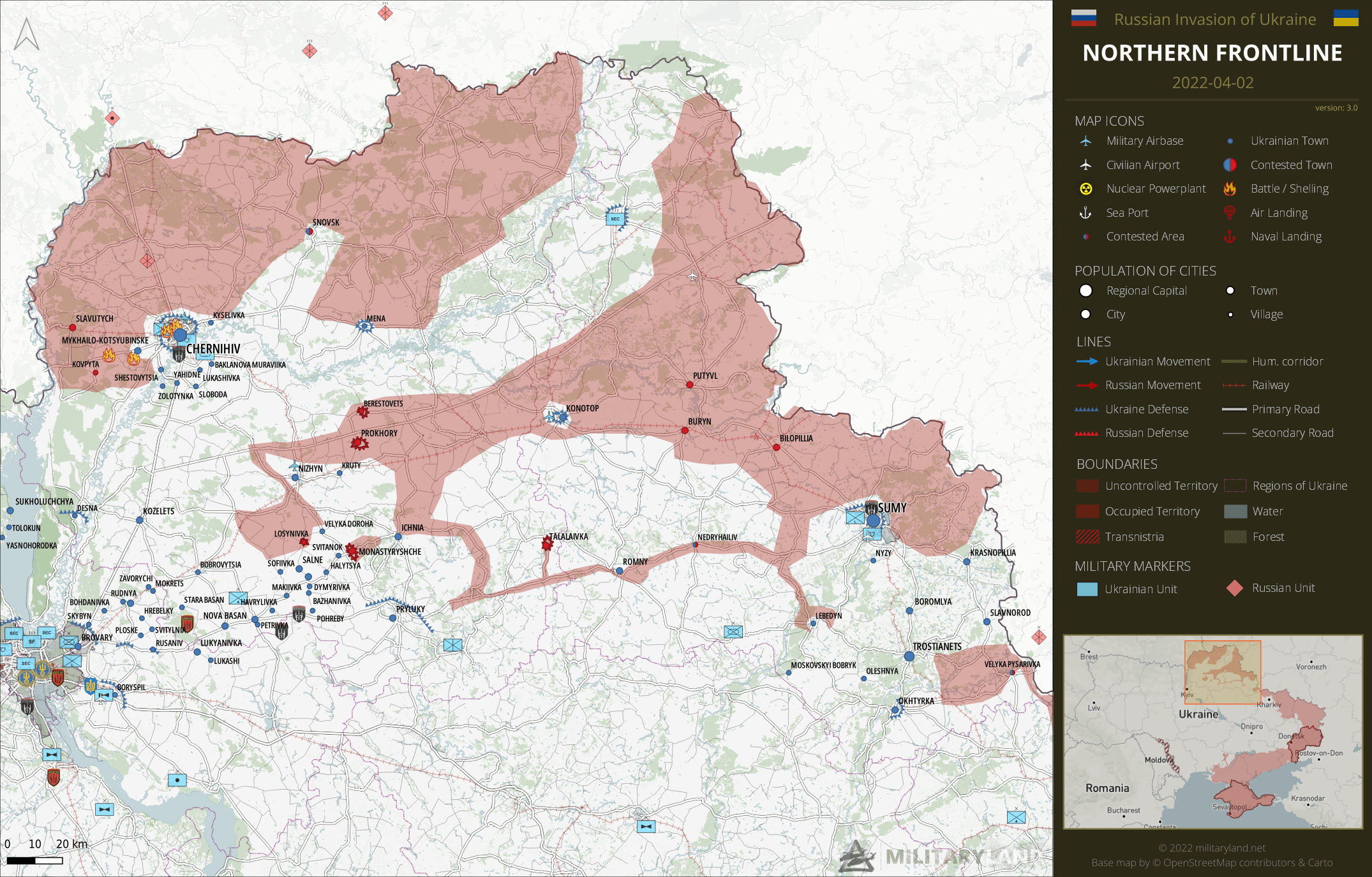 Ukrainian forces liberated Mykhailo-Kotsyubinske and Kyselivka in the vicinity of Chernihiv. In the east, the Ukrainian units regained control of Velky Doroha and will most likely soon recapture the remaining area of Nizhyn, Ichnia and Kruty.

Russian Army concentrates its forces in the vicinity of Konotop, Buryn, Putyvl and Bilopillia. There are no indication of withdrawal, as we could have seen in Kyiv and Chernihiv Oblast. 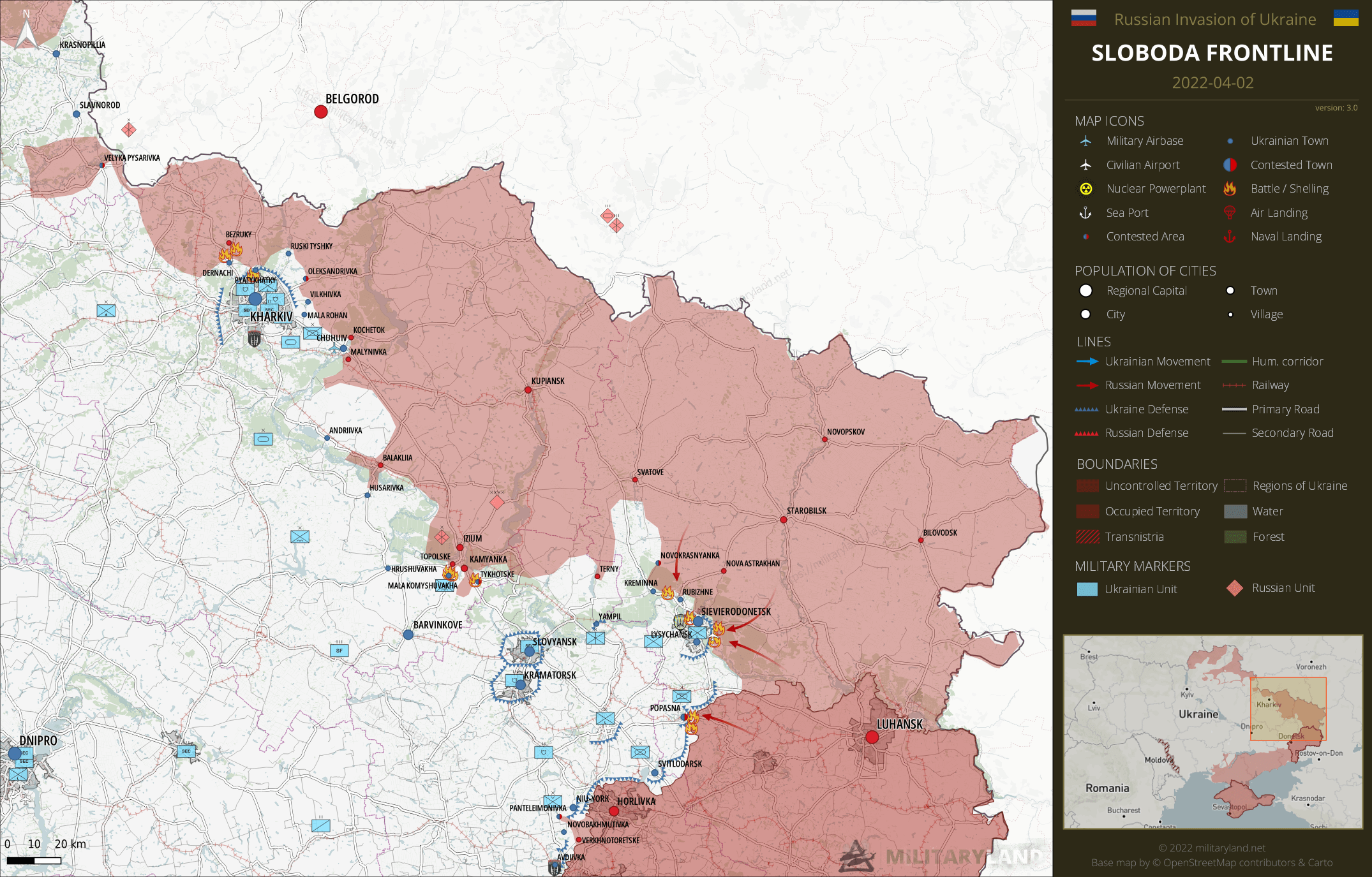 We’re still waiting on the results of the counter-offensive near Mala Rohan, Vilkhivka and Chuhuiv towards the Russian border. The fights have continued in the area of Mala Komuyshuvakha and Tykhotske.

Russian Army focuses all its forces to capture Rubizhne, Sievierodonetsk, Lysychansk and Popasna. If the enemy manages to capture these four towns, it’ll open the path to Slovyansk. 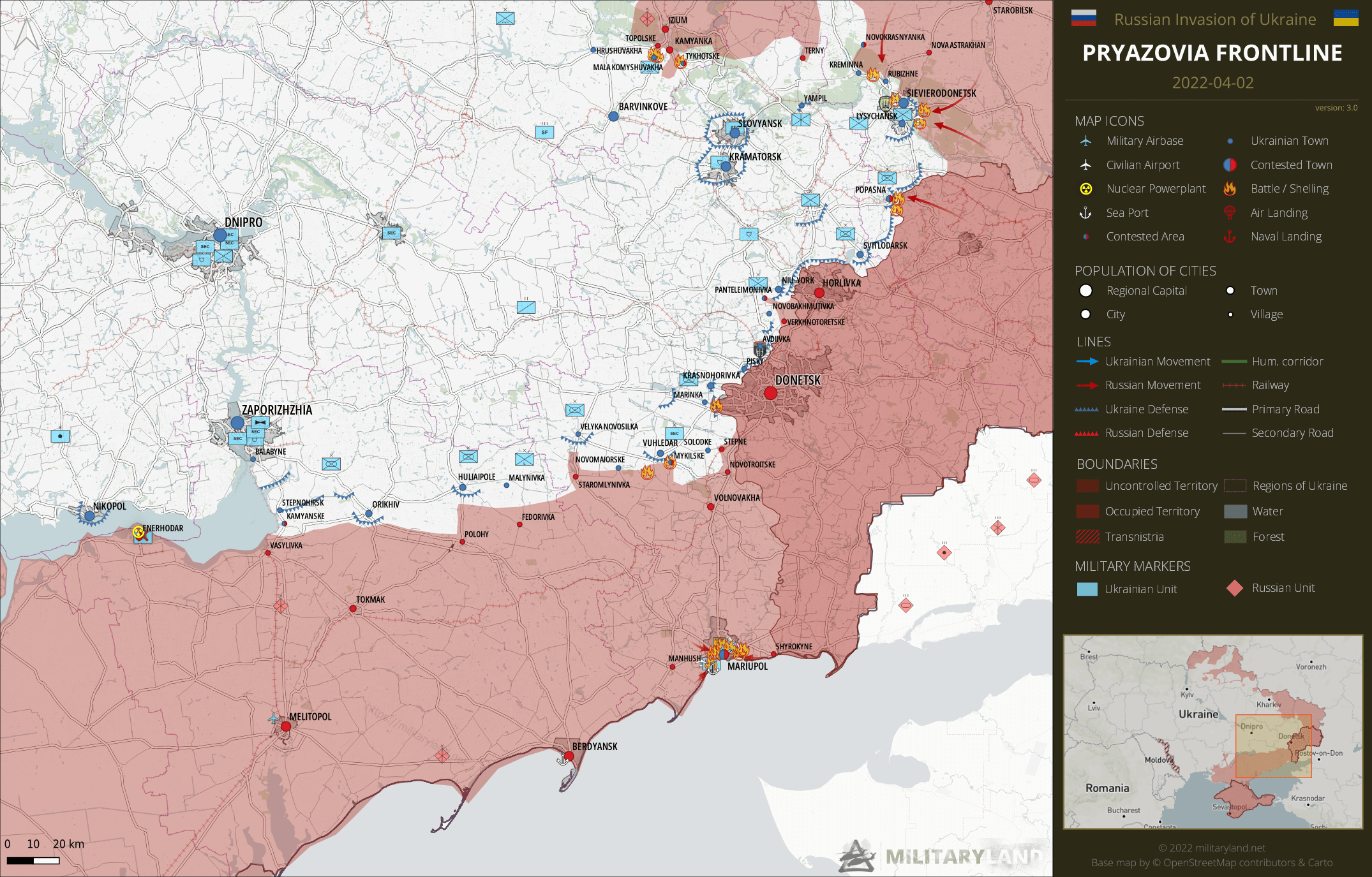 Russian troops advanced a few meters in Marinka and attempted to storm Vuhledar, without success. 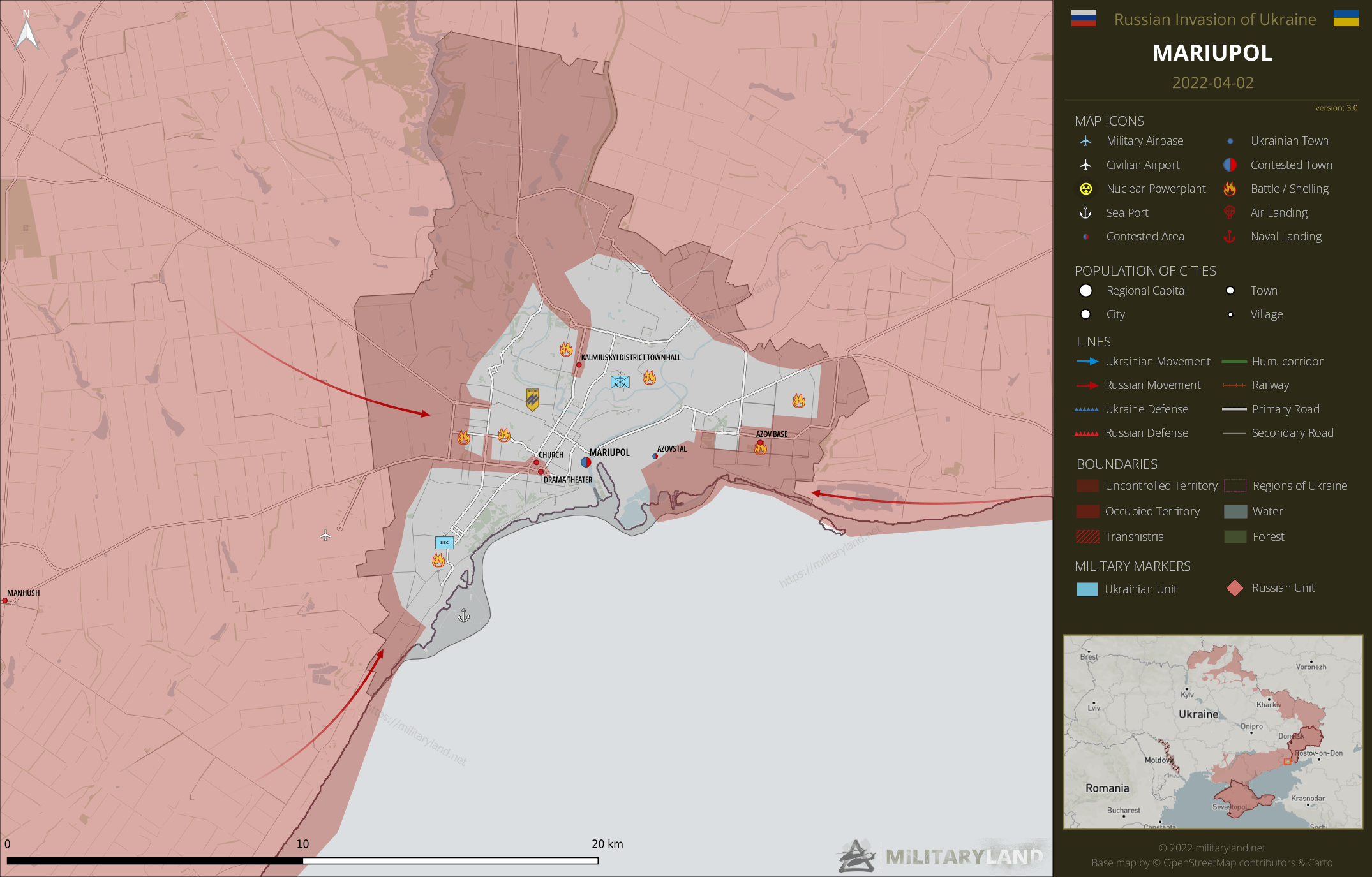 The exact situation in Mariupol remains unknown due to the fog of war. Ukrainian forces still remain in control of some portions of the city. 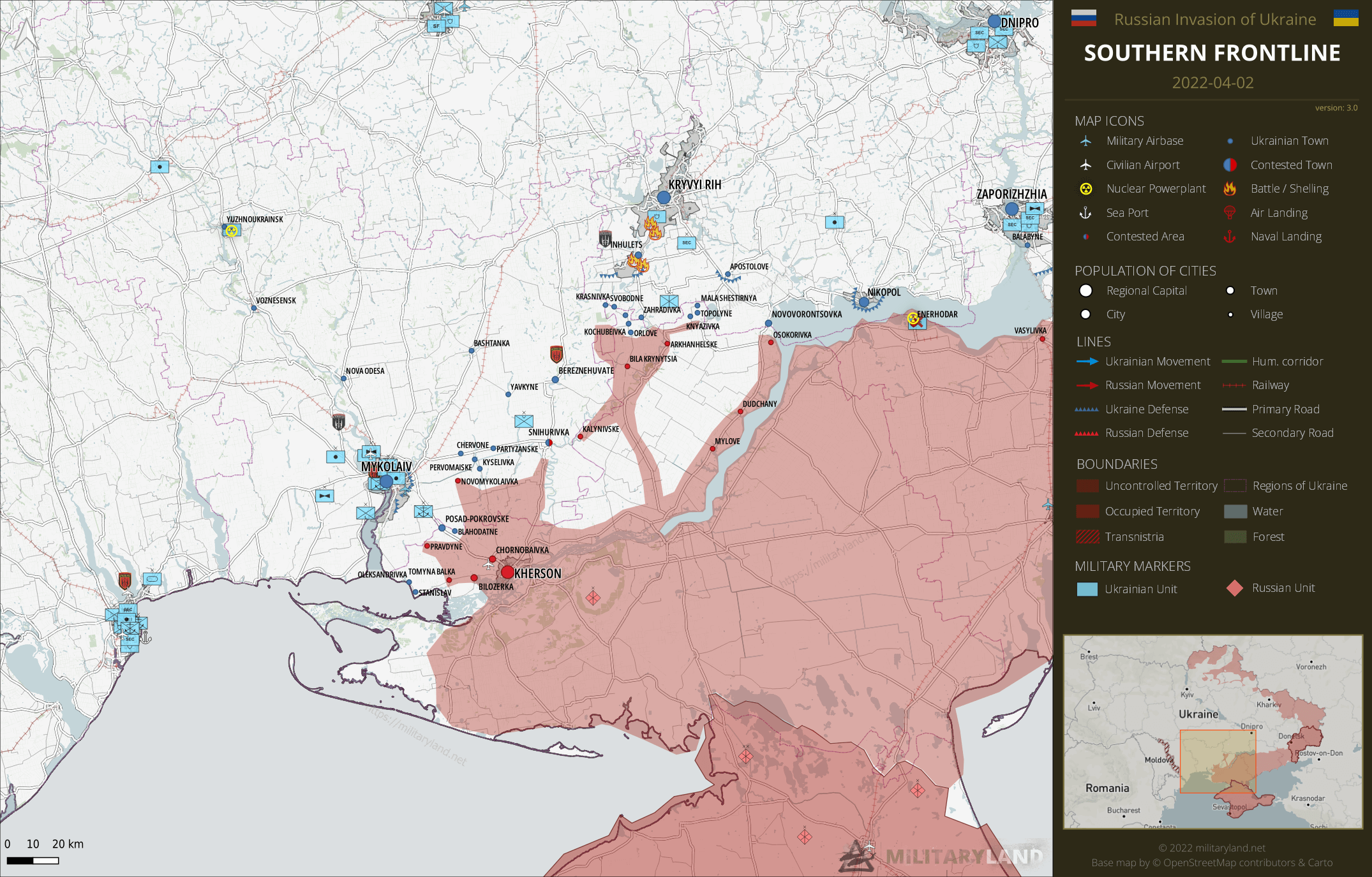 Russian forces shelled Inhulets and the outskirts of Kryvyi Rih with GRAD missiles. 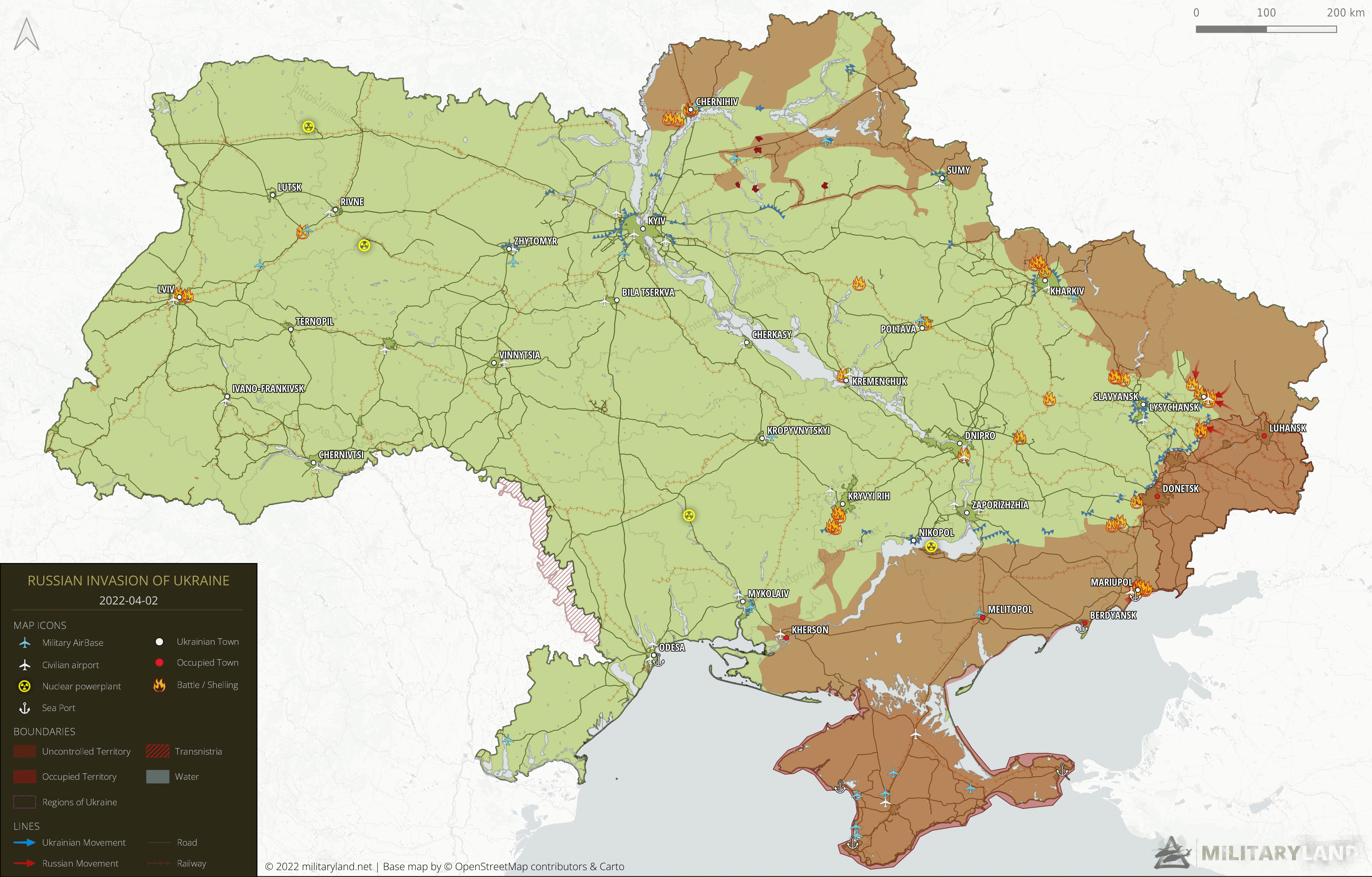 Hello, guys! Thanks a lot for your job! But still I wonder why you mark as the parties of this war as Ukraine and “separatists” (e.g. on the bottom of this page)? Where is Russia as the party of this war? It made me confused, correct me please, if I am wrong.

As to the Sjewerodonezk area: 1. The Russian MOD has, in Saturday’s afternoon briefing on FB, posted to have reached the eastern and southern outskirts of Borovskoye (Boriwiska), and on Friday reported having reached Metjokine. Both villages are on the eastern outskirts of Sjewerodonezk. This may be a bit too fine-grained for your maps (which anyway are much more fine-grained than most other maps published elsewhere). Still, it seems to me that you have both… Read more »

The Russian Saturday morning briefing on FB has furthermore reported that “Units of the armed forces of the Donetsk People’s Republic have captured most of Novobakhmutovka”. Whatever “most of” means – I think you should change the status of the village from “Ukrainian controlled” to at least “contested”. Otherwise, I continue to wonder about your placement of Panteleimonivka. I still believe any mention made so far relates to https://en.wikipedia.org/wiki/Panteleimonivka_(urban-type_settlement) And, yes, I am aware that… Read more »

Has a map of the northeast with their interpretation of recently-liberated/remaining Russian-controlled road corridors.

(I also posted yesterday about the Sumy-Romny road.)

I’d be very careful about the statement that all of Kyiv oblast is back under Ukrainian control. A lot of sources indicated significant Russian presence there over the past 48 hours, and they’d been digging in for days, which is not something you do when you intend to pack up and leave entirely. As the fog of war dissipates, I think we’ll find that they retreated north somewhat, but still have a significant presence in… Read more »

List your sources as a counter-argument then, so far I know, almost every source indicated that the Russian army was in full retreat at the north (back across Berorussia) and the east of Kiev (towards the Russo-Ukrainian border).

They might be dug in the Chernobyl Exclusion Zone. In which case that’s good for UA 🙂

They handed back the plants itself to UA authorities, so seems unlikely they’re dug in in radioactive soil.

As to the Northern Frontline: 1. Russian troops have been reported to have left Horodnaja, NE of Chernihiv (see link, c.f. ISW’s assessment of tonight). Acc. to the article, Russian troops not just left the town, but the whole rayon, and destroyed a border post (probably the Senkivka crossing at the border to Belarus and Russia). https://suspilne.media/224587-zsu-zvilnili-kiivsinu-rosiani-okupovuut-centr-sumsini-2-kvitna-so-vidbuvalosa-v-oblastah/ 2.As there aren’t any viable border crossings from Russia into Ukraine along the Snow river marshes east of… Read more »

I think Ukraine will have troops sweep the northwest of Kyiv in a variety of ways to look for stragglers or remaining RF forces.

Thanks a lot for Your efforts!