The battle of Kyiv is over. The Russian Army acknowledged the loss of its offensive potential in the area of Kyiv and has withdrawn its forces to Belarus, or rather what has remained of them. Ukrainian Airforce conducted a mission behind enemy lines. Two Ukrainian helicopters managed to reach the Russian city of Belgorod undetected (~32 km from the border) and bombed the local fuel depot. 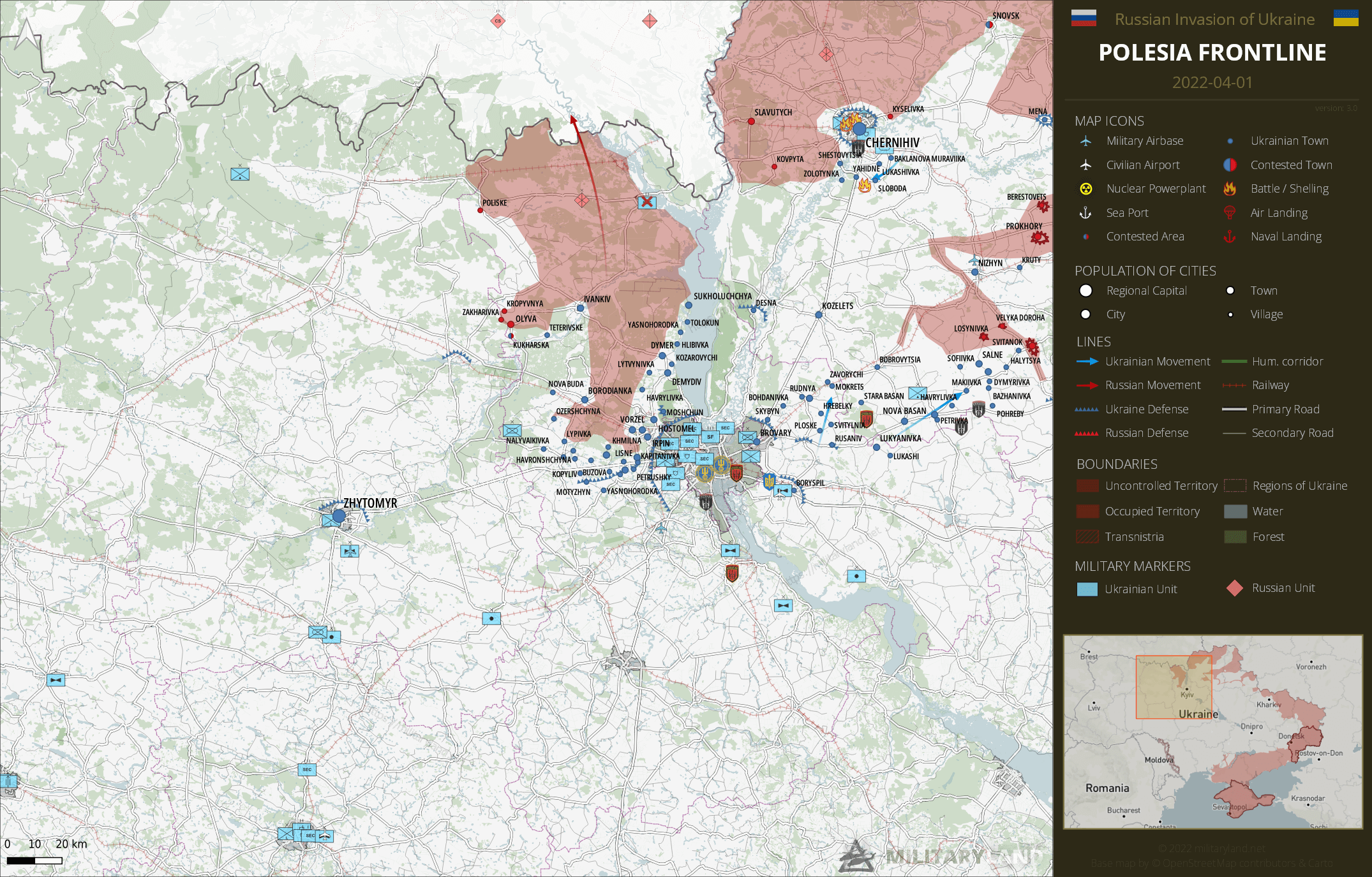 Russian troops have withdrawn from dozens of settlements, leaving their equipment behind in many cases. Ukrainian forces have begun to clean up the areas and eliminate the remaining pockets of resistance.

Northern part of the western bank of Dnieper:

Southern part of the western bank of Dnieper: 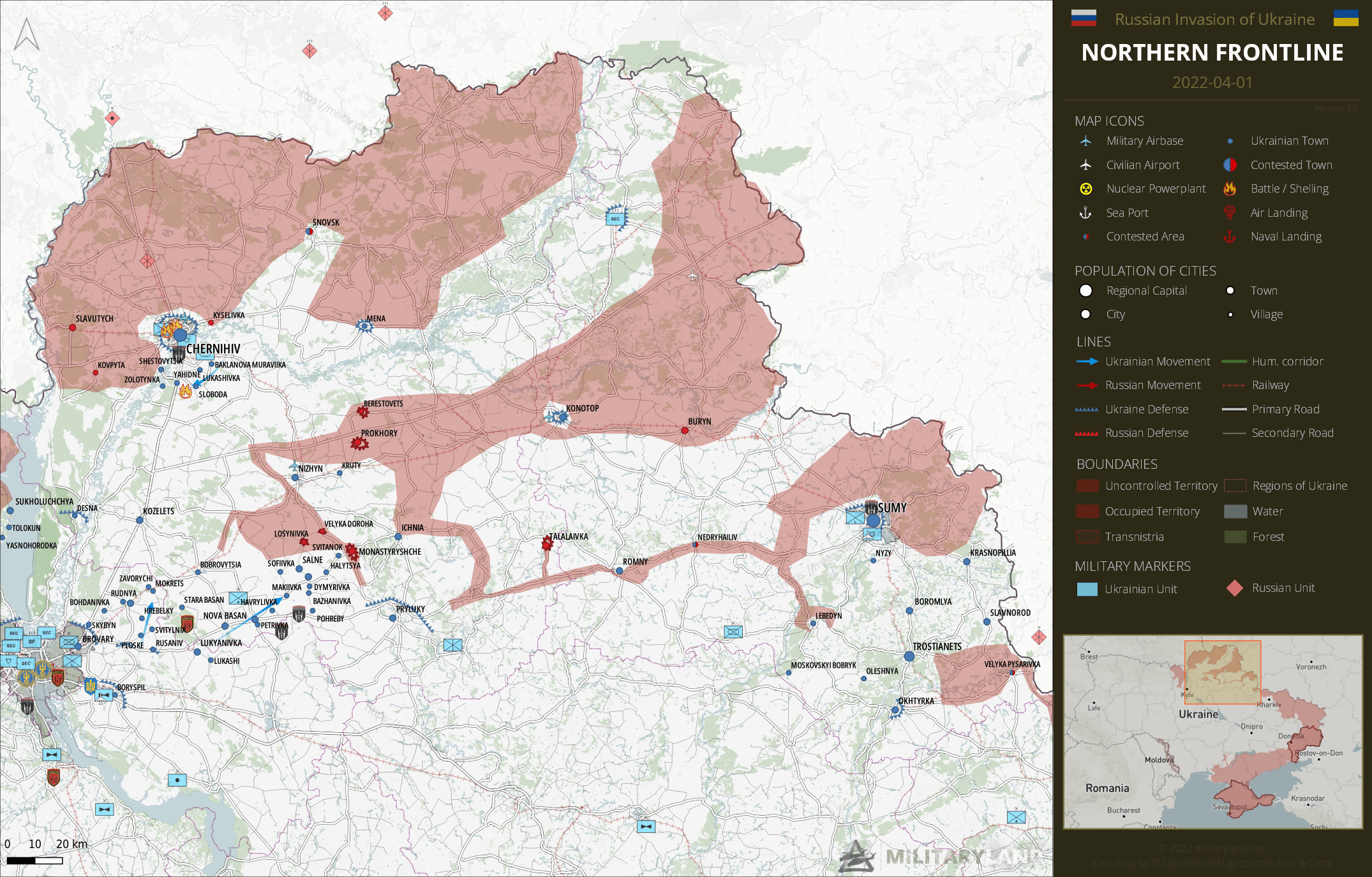 Russian troops have withdrawn from dozens of settlements in Chernihiv Oblast as well. Ukrainian forces regained the control of highway M-01 (Kyiv – Chernihiv). However, the bridge near Shestovytsia is reportedly destroyed. Russia forces remain north of the regional capital.

Ukrainian forces regained control of the following villages and towns:

Russian forces set up defensive positions in the vicinity of Buryn. 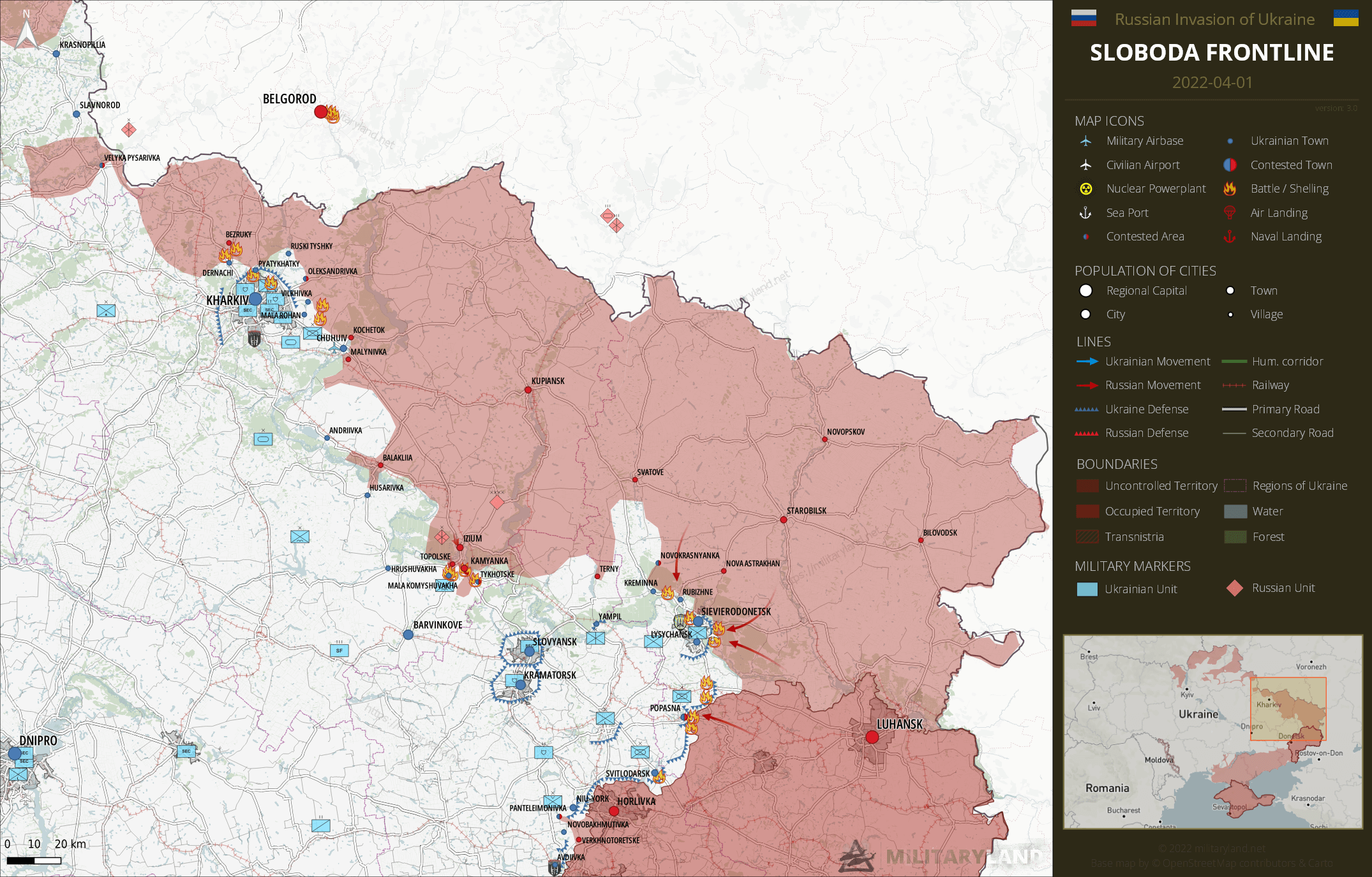 Russian forces bypassed Izium and have moved in the direction of Slavyansk and Barvinkove. According to Ukrainian officials, a few members of Izium city council betrayed and reveled the weak points of Ukrainian defenses. Ukrainian elements have stopped the advancing enemy near the village of Mala Komyshuvakha.

Ukrainian forces repulsed all attacks on their positions in the area of Rubizhne, Sievierodonetsk, Lysychansk and Popasna. 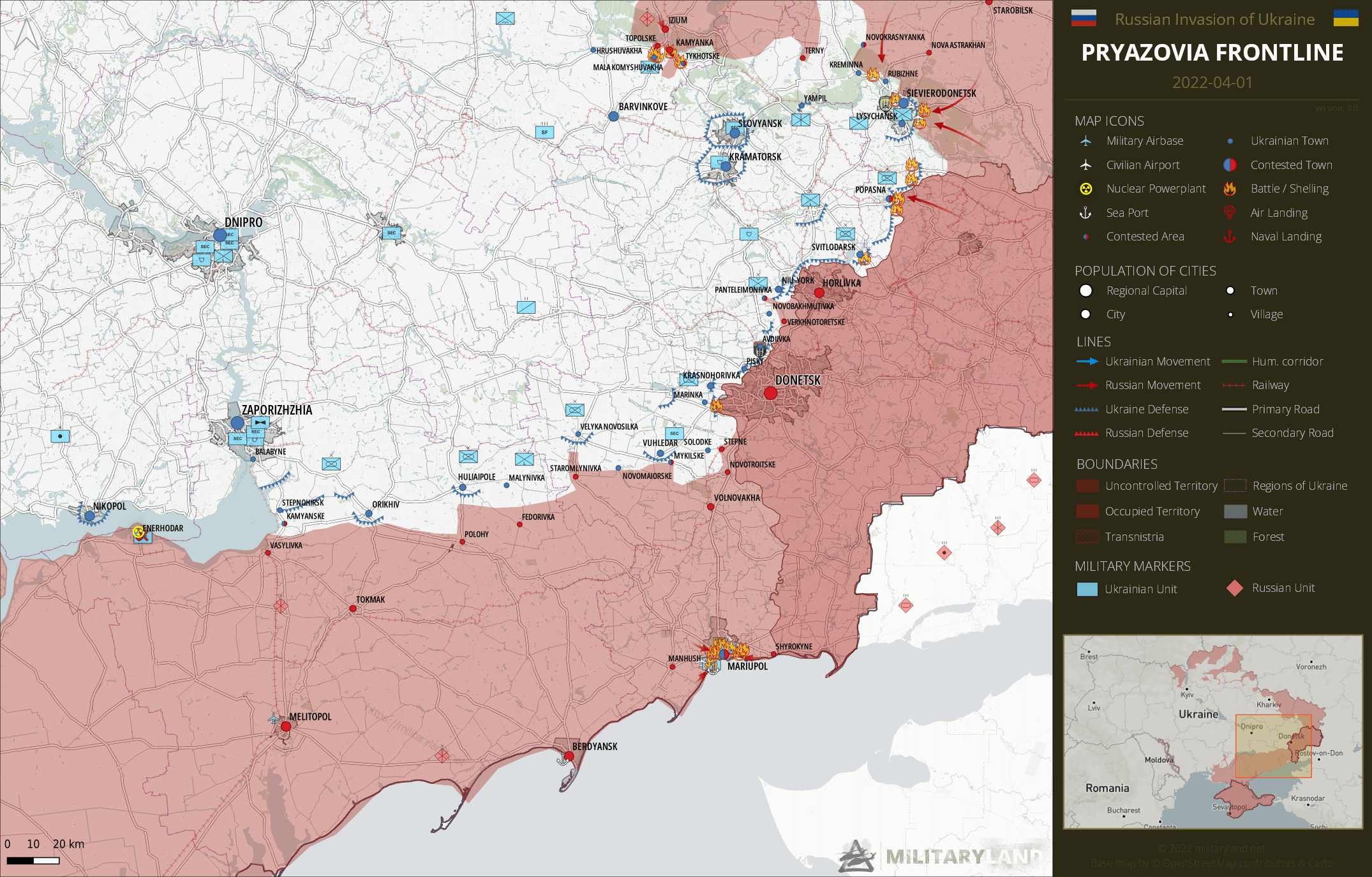 Ukrainian forces repulsed an enemy attack near Marinka. Russian troops might soon approach Slovyansk from the direction of Izium. The battle that will decide the fate of Donbas is ahead of us. 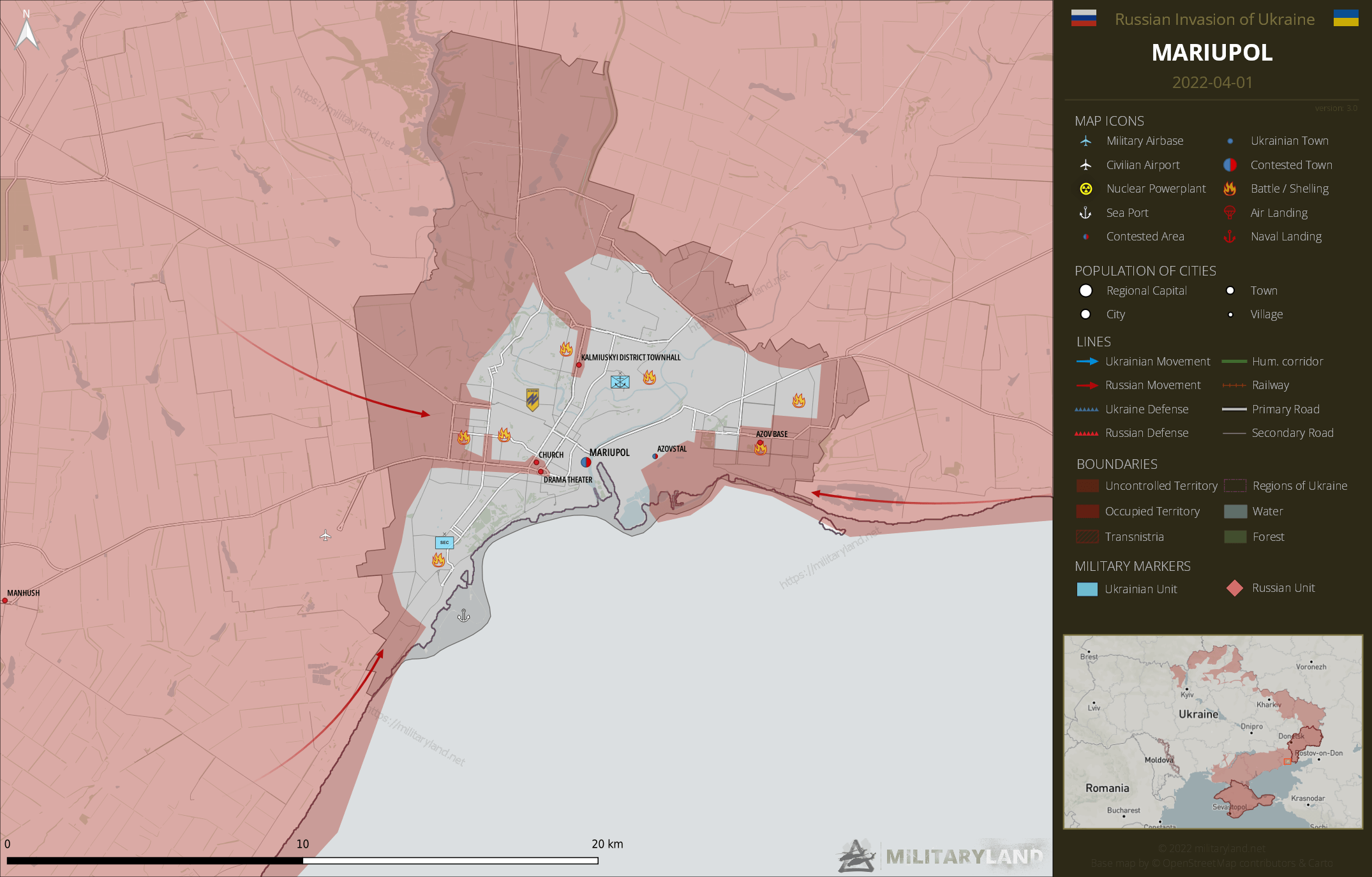 There are no details on the combat inside the city. Ukrainian forces are holding, but they cannot withstand the constant Russian pressure forever. Ukrainian Army needs to act as soon as possible. 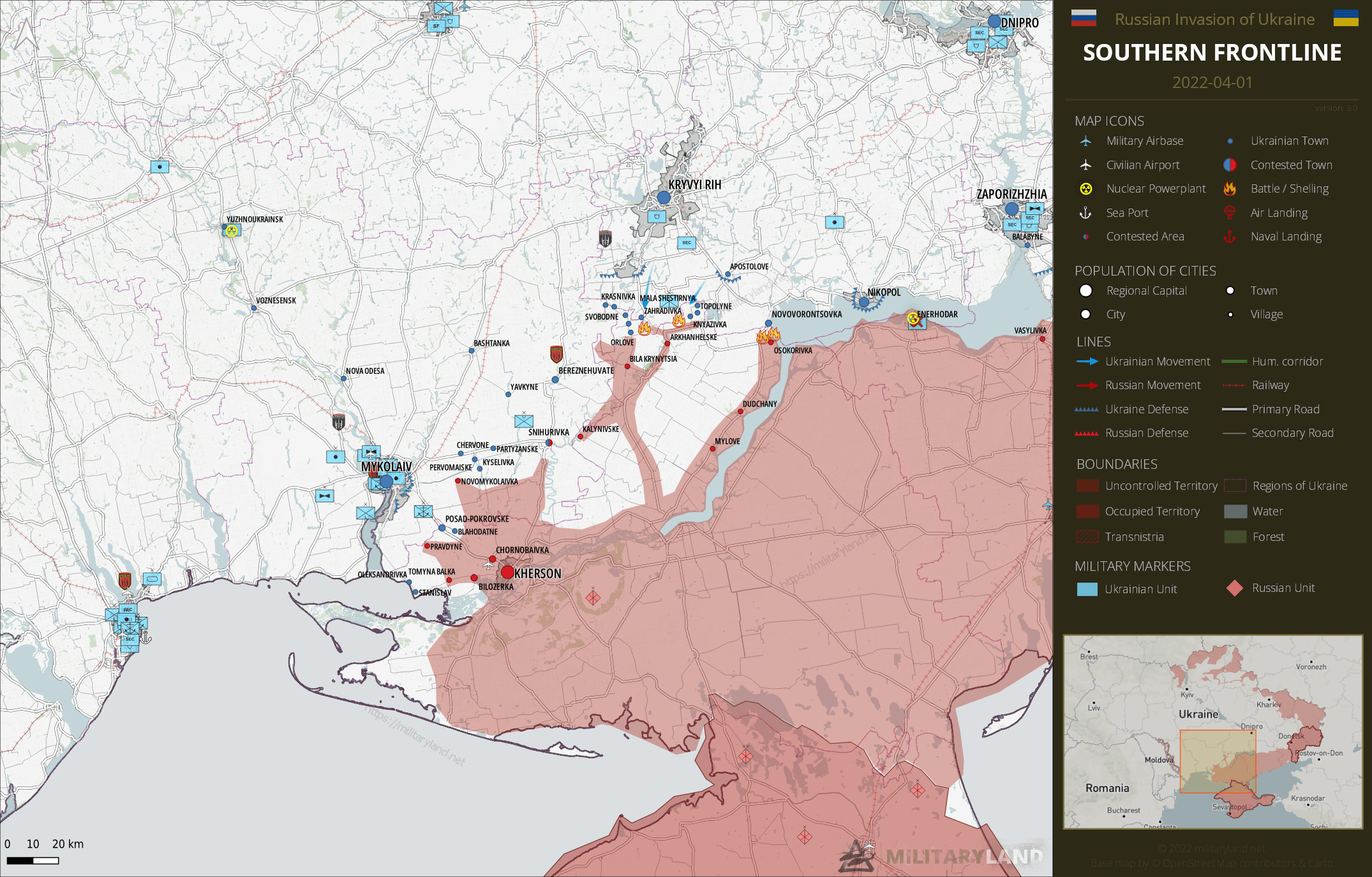 Ukrainian troops reported clashes in the north of the Oblast. It’s unclear if they are defending or attacking. 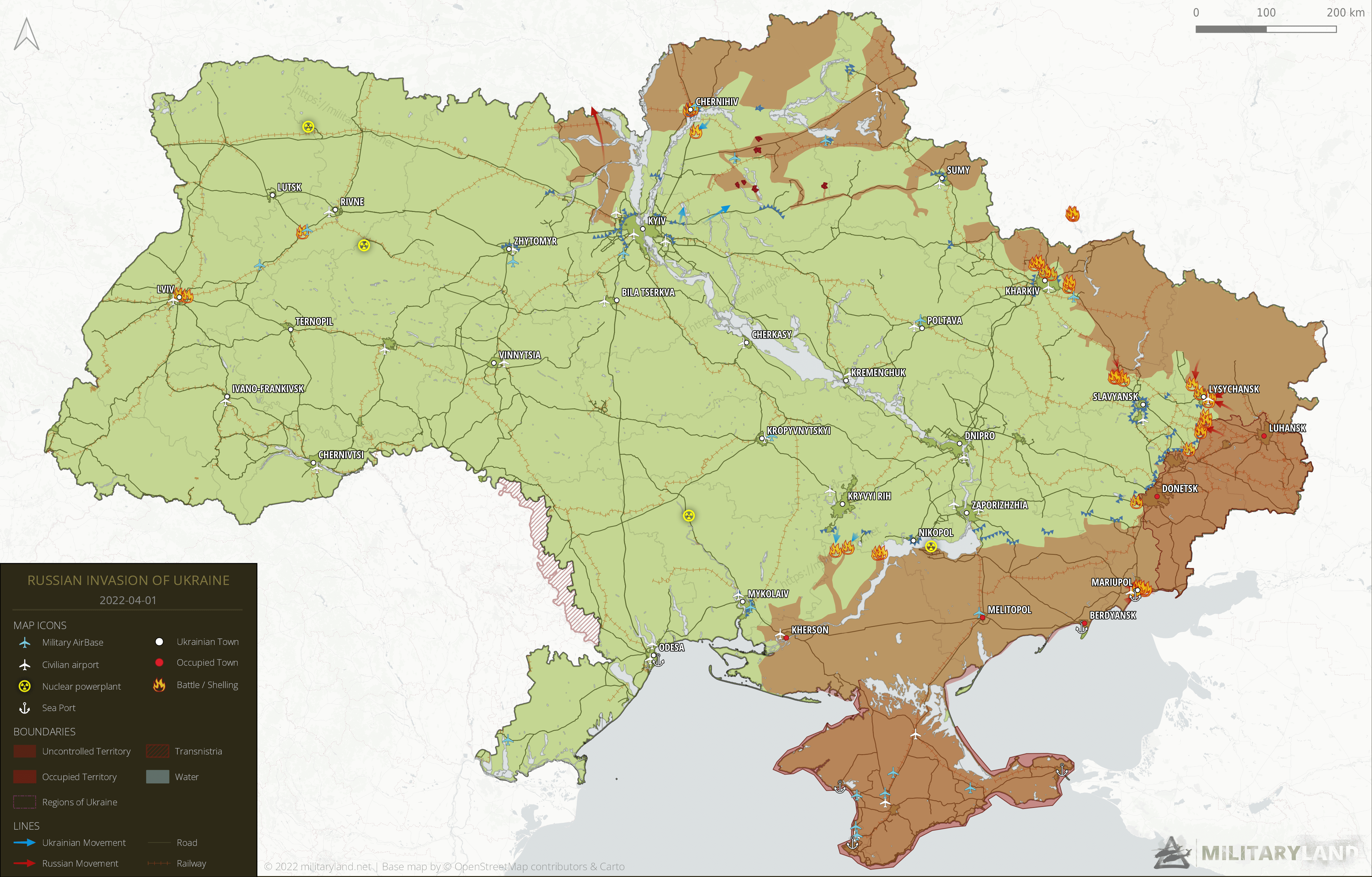 Thanks for the updates!

Why is Ukraine not acknowledging the strike on fuel depot? They have lied about killing various Russian generals in the past many of which have resurfaced, im surprised they didn’t claim to have done it. Or could it be a Russian tactic? Hmm we’l never quite know for sure. In any case the 1st phase of the operation is over. Get ready for the 2nd phase. It aint over.

If the Ukrainians only believe they killed a Russian general, it may make sense for them to claim they knew they killed a general for the following reason, even if they risk being exposed of a lie. If the Russians do not publish a rebuttal to a strong claim by the Ukrainians, then this amounts to a confirmation of the Ukrainians’ claim, and this is worth more to Ukraine than the disadvantage they suffer from… Read more »

Yes they are unconfirmed claims just like their ignorant claim on day 1 if you remember that story of 13 soldiers on Snake island who were killed by a Russian warship who fought bravely and were even awarded posthumous medals by Zelensky (great PR opprtunity). It turned out the Russians didn’t kill them and that there were alive and safe and that there were actually far more than 13 soldiers on the island. Thats why… Read more »

Says “you can travel freely from Romny to Sumy.” Mentions Nedryhailiv.

“Ukrainian Airforce conducted a mission behind enemy lines. Two Ukrainian helicopters managed to reach the Russian city of Belgorod undetected (~32 km from the border) and bombed the local fuel depot.”
not acknowledged by ukraine afik… so what is your sources ?
could be a false flag operation ?

It would be a very stupid false flag on the part of the Russians. What value would it bring to them? What tactical advantage? They’ve been spouting that the Ukrainian military is crippled, and no longer a threat. That fuel depot was the primary point of supply for the already beleaguered logistics in the Donbas. Why would they perform an attack that terminally damages their operations and makes them look like fools who lied about… Read more »

Never underestimated the Russians when it comes to stupid moves 😉
That said I don’t believe it is false flag operation either – but it may be non-authorized operation by some local command/unit. Whatever happened it crippled locally the Russians ability to attack Kharkov/Sumy.

Never underestimate the possibility of using a false flag in order to announce mobilization. It has long been rumoured that the bombings that preceded the start of the second Chechnyan war were also false flag. Those had real civilian casualties though…. We’ll see if there are more.

Those had ONLY civilian casualties. That would be an acceptable false flag for Putin, whereas a fuel depot on a critical location does not appear to be as such. Acknowledging the attack by Ukraine would not happen. Although its a big morale boost for their military, from a diplomatic point of view they probably want to be careful. Attacks on Russian soil will be likely exploited by Russia to rally some public and international support.… Read more »

You serious? The 2nd Chechen war ’99-2009 was a result of the 1st Chechen war 3 years earlier ’94-’96, which in itself was a result of the dissolution of the USSR in ’91 instigated by the West. It’s a cascade of events that are interlinked, not a false flag scenario that preceded the war like for instance that some say about 9/11. Also, during the 2 conflicts, the Chechen militants had mujahideen fighters from the… Read more »

I lived in Russia at the time, so I remember what preceded the 2nd Chechen war very well. Yes there was an incursion by Khattab and the islamists into Dagestan. That incursion was beaten back quite quickly. But a lot of Russians were still traumatized by the 1st Chechen war and did not want to fully invade Chechnya. The press was still quite independent at the time. Those bombings, and other terrorist attacks helped galvanize… Read more »

Russia needs to provide proofs that it was a Ukrainian strike. Could have been anyone

Anyone such as? The Mi-24 has a combat radius of 160km. They could only have taken off from Ukraine or Russia itself.

What are you on about man. Which other side could it have been? Poland? Lithuania? Hey, maybe it was George Soros who launched a missile from his private jet? lol

this site used to have 50,100 comments but now when they start with complete fiction,nobody even comes here …

I’m glad we still have you here.

ye, destroying a fuel depot seems like a reasonable tactic if you expect for Russia to mobilize more army around that region. That would slow them down by a few days. Also if they wanted to use it as a mobilization they would attack civilian target or at least emptied some market beforehand since it would also recognize as civilian structure.

The only question is why Ukrainians should deny this operation in Belgorod.
Perhaps the West, or some states of the West, conditioned its support for arms supply on Ukraine not operating on Russian soil.

Ukraine forces special group actively supported by NATO contractors did attack on Belgorod oil depot. If in future it get disclosed that NATO contractors were involved in Belgorod attack , it will be considered as NATO attack on Russian soil. Hence they want to hide every detail possible.