Ukrainian troops continue to mount counter-attacks and drive enemy forces away from the western outskirts of Kyiv. Okhtyrka is no longer besieged, Russian troops withdrew across the border. Ukrainian counter-offensive is also reported from Kharkiv Oblast. 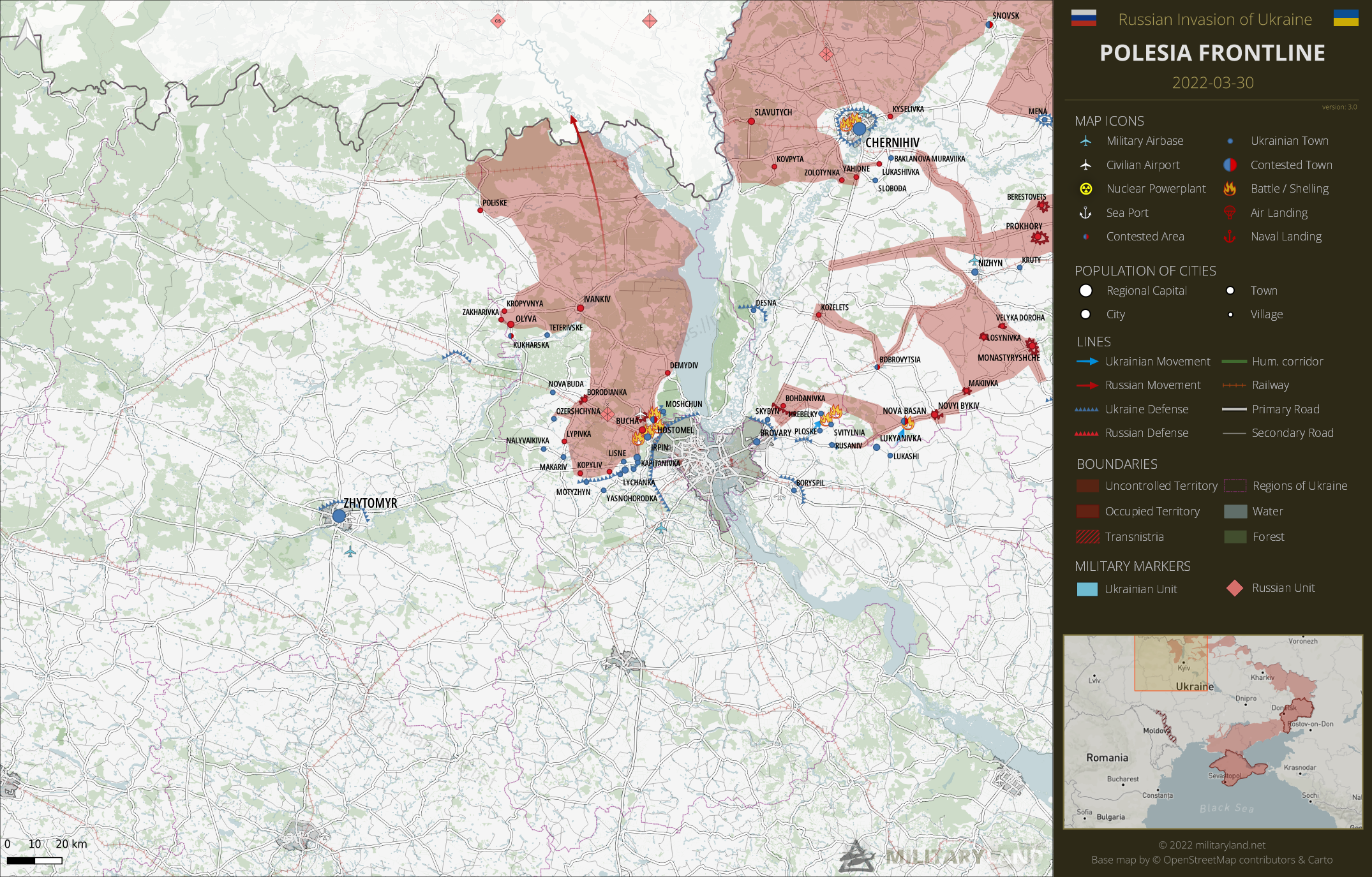 Ukrainian officials reported heavy fighting from the area of Irpin, Bucha and Hostomel. Russian troops have reportedly begun to withdraw from Chornobyl zone towards Belarus. Ukrainian Army liberated Svitylnia, Hrebelky and Ploske in the east and have also reached Nova Basan. Locals report heavy battle in the area. 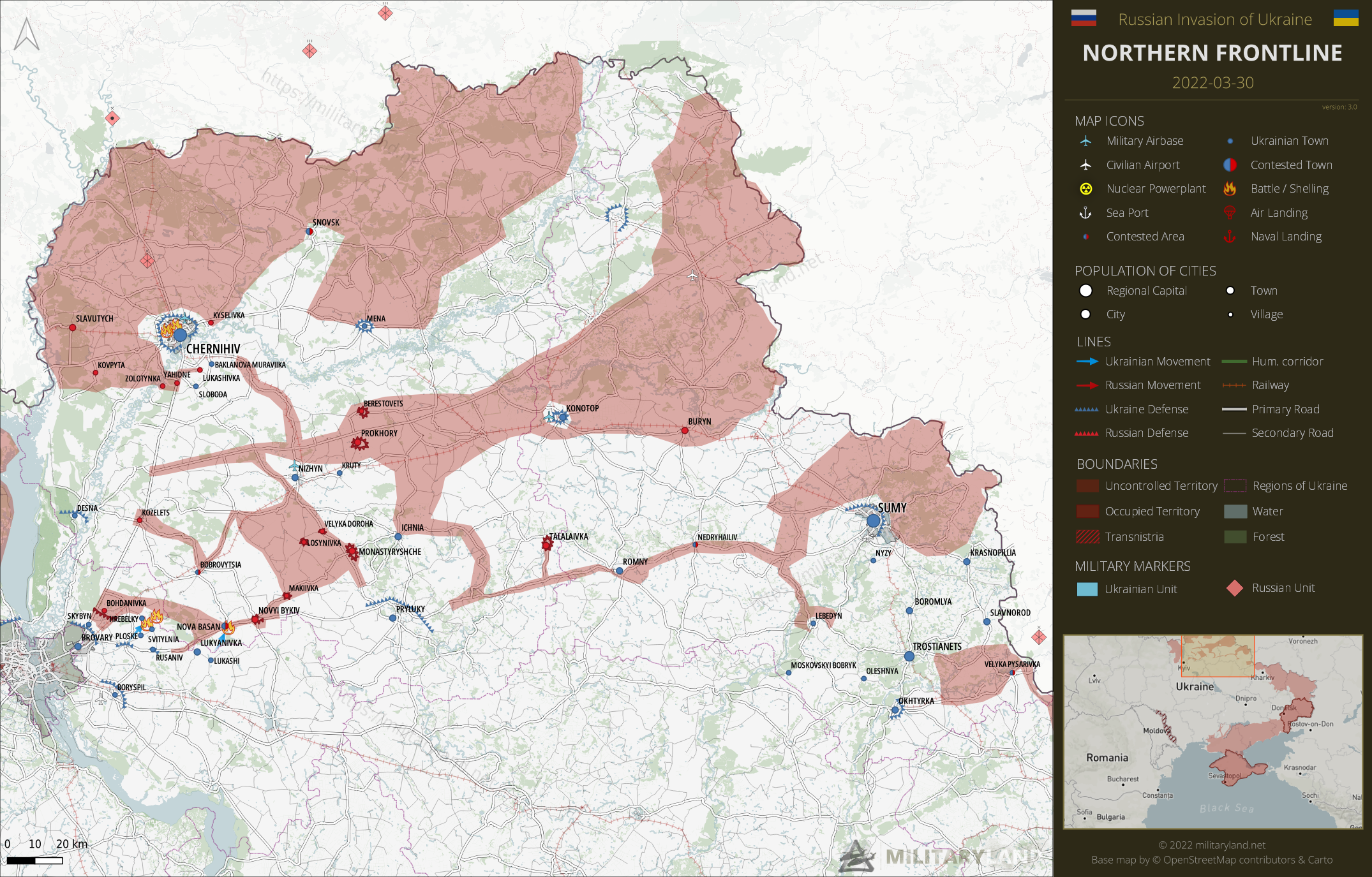 Russian Army intensified the shelling of Chernihiv. Ukrainian forces managed to reach and liberated Sloboda village in the south, unclear from which direction at this moment.

According to Sumy deputy governor, the road connecting Sumy and Poltava is open again. The remaining Russian troops in the area withdrew across the border. 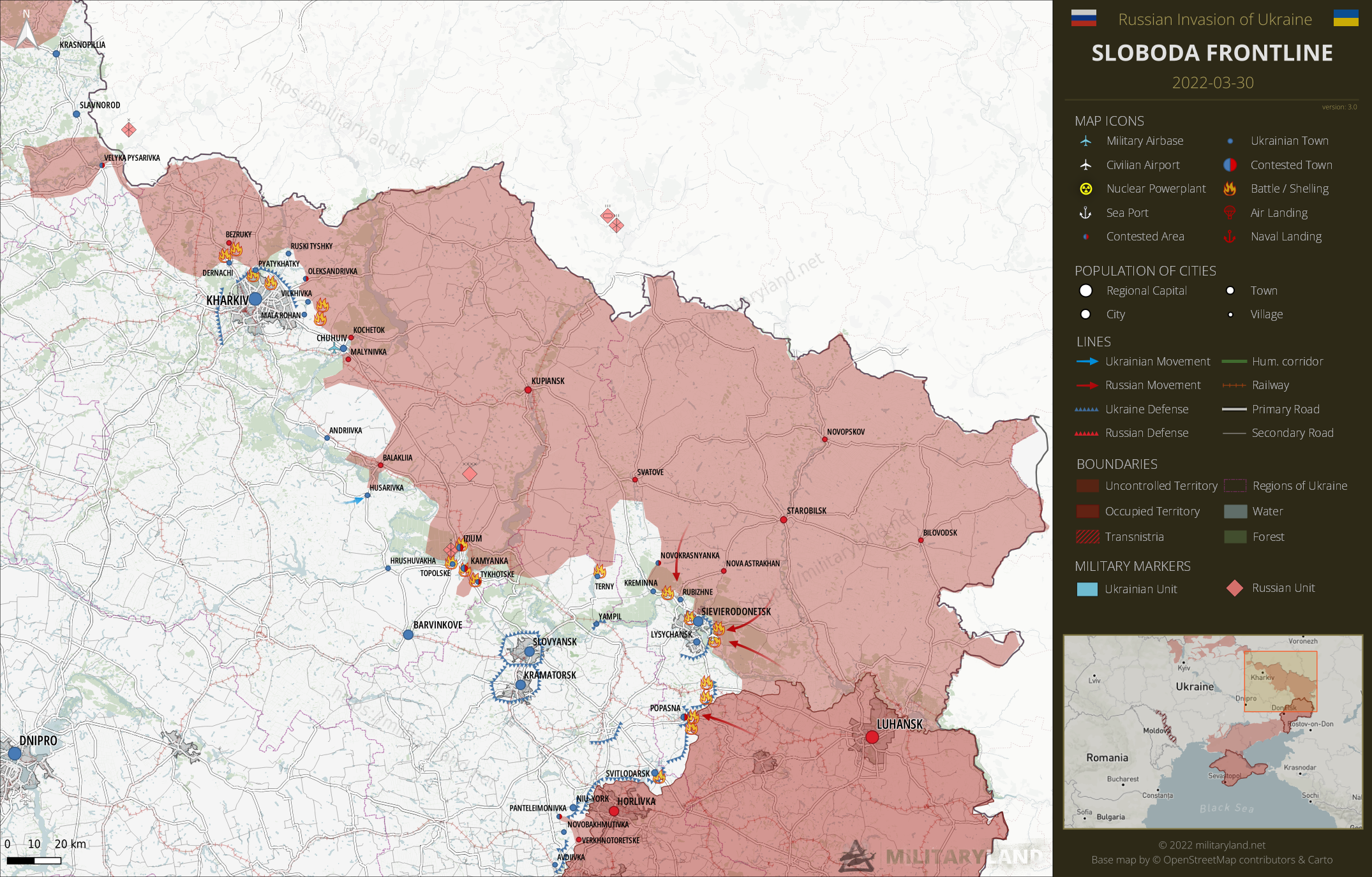 Russian Army have resumed shelling of the outskirts of Kharkiv. Ukrainian troops have launched a counter-offensive in the direction of Derhachi and Mala Rohan.

The most critical point in Kharkiv Oblast remains Izium. Russian forces have reportedly strengthened their forces and prepare to intensify the attacks towards Izium. 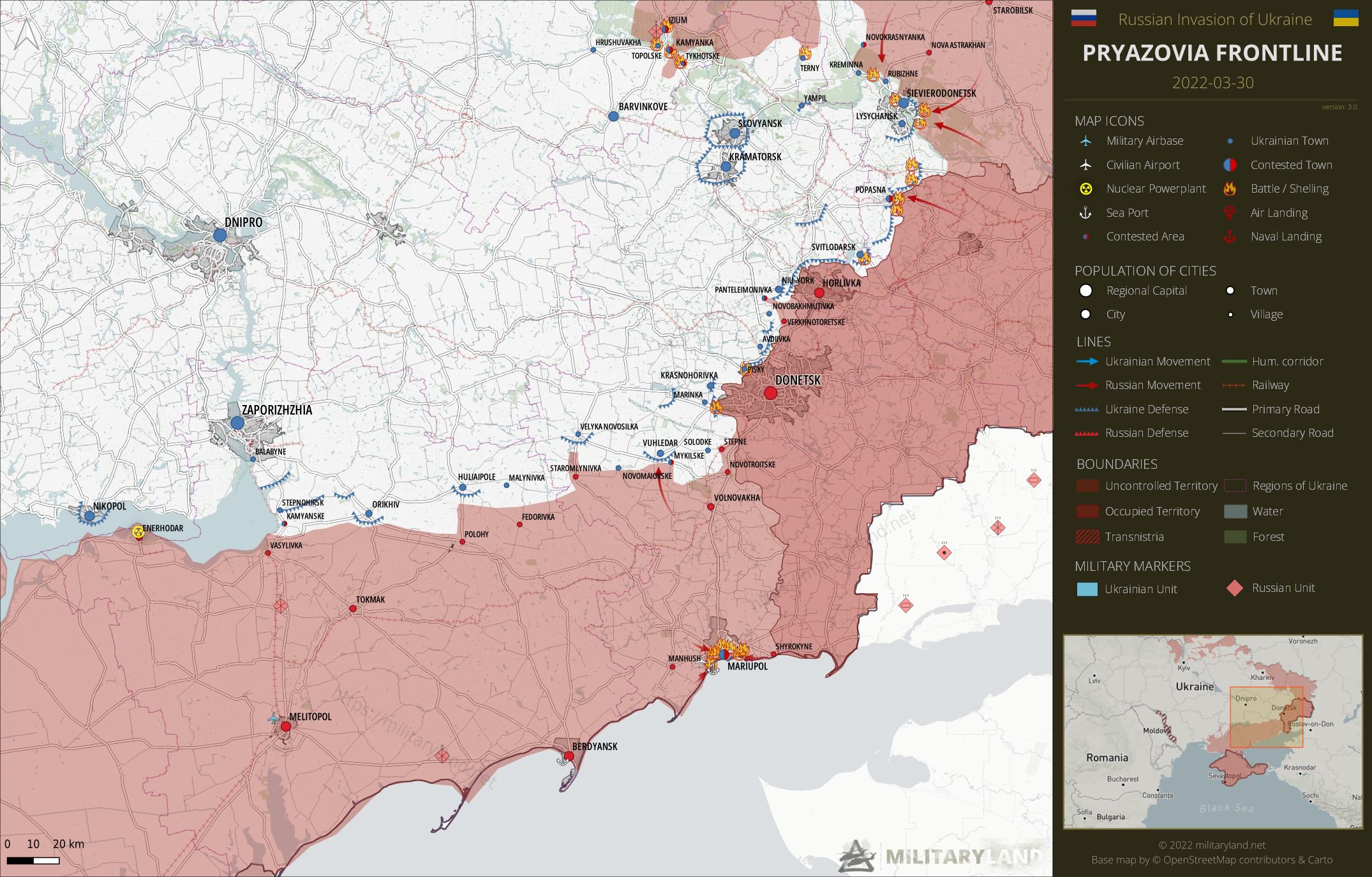 There was no change on the ground in Donetsk Oblast. However, Russian Army is reportedly amassing large amount of troops in the vicinity of Svitlodarsk and Horlivka. Slovyansk and Kramatorsk are the main target of Russian forces, and a morale boost for whichever side controls these two iconic towns.

The situation on the frontline remains under the control. Russian artillery shelled Orikhiv and Huliaipole, but didn’t launch any ground offensive in the area. 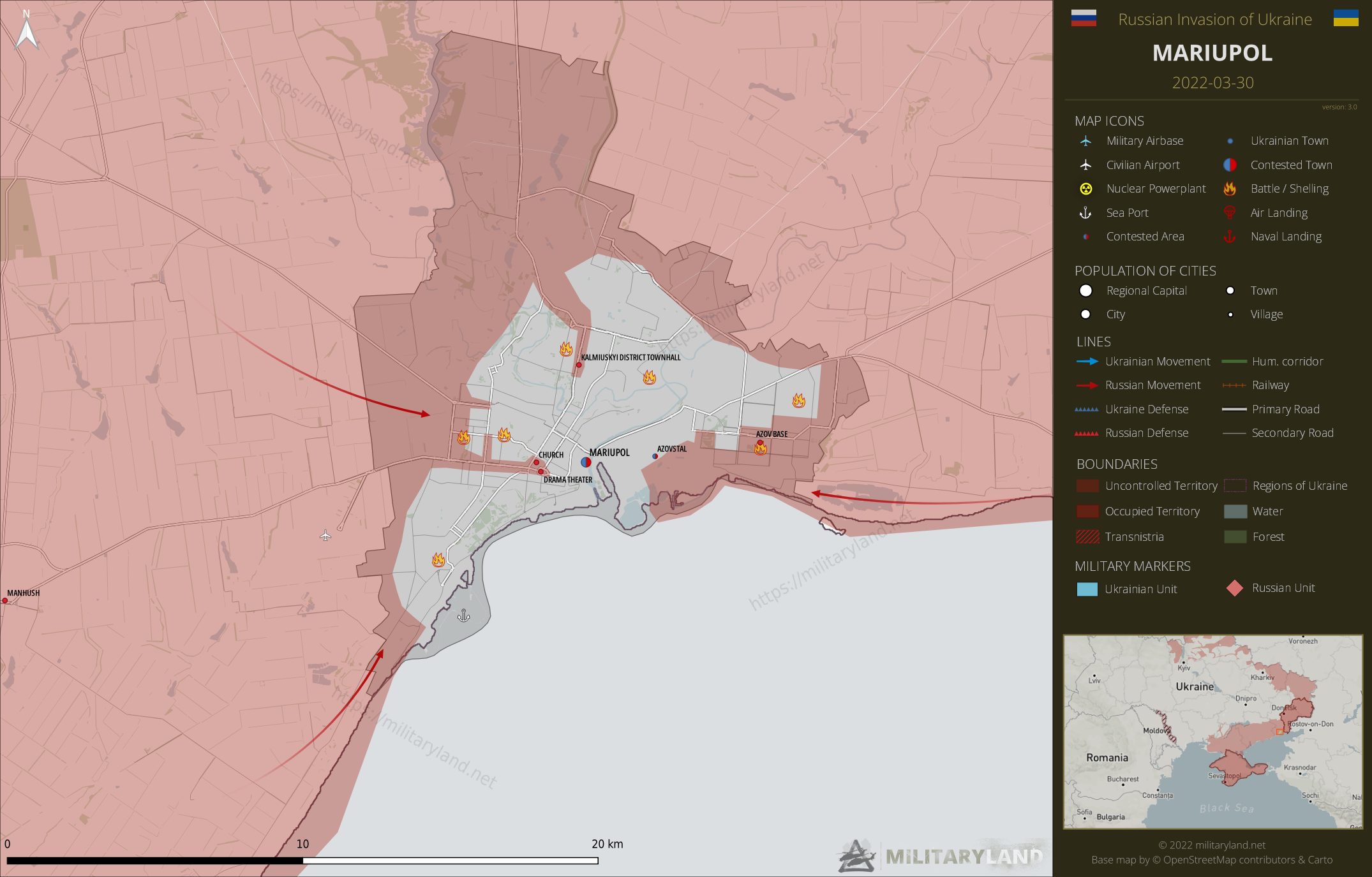 The fog of war prevents to report anything new. The battle is still ongoing. 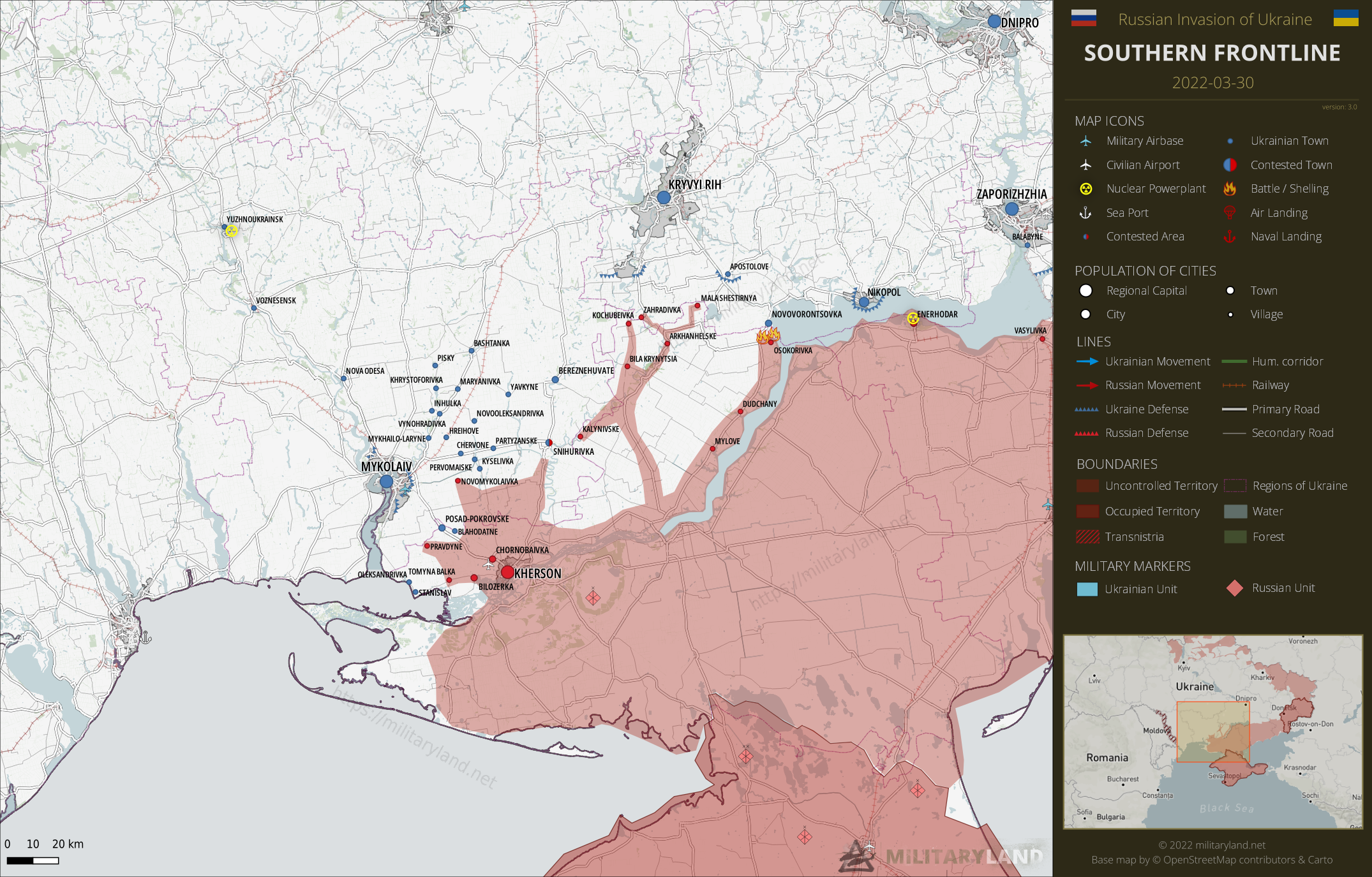 Russian forces shelled Novovorontsovka in the north. Preparations for a public referendum regarding Kherson’s People’s Republic have reportedly resumed. 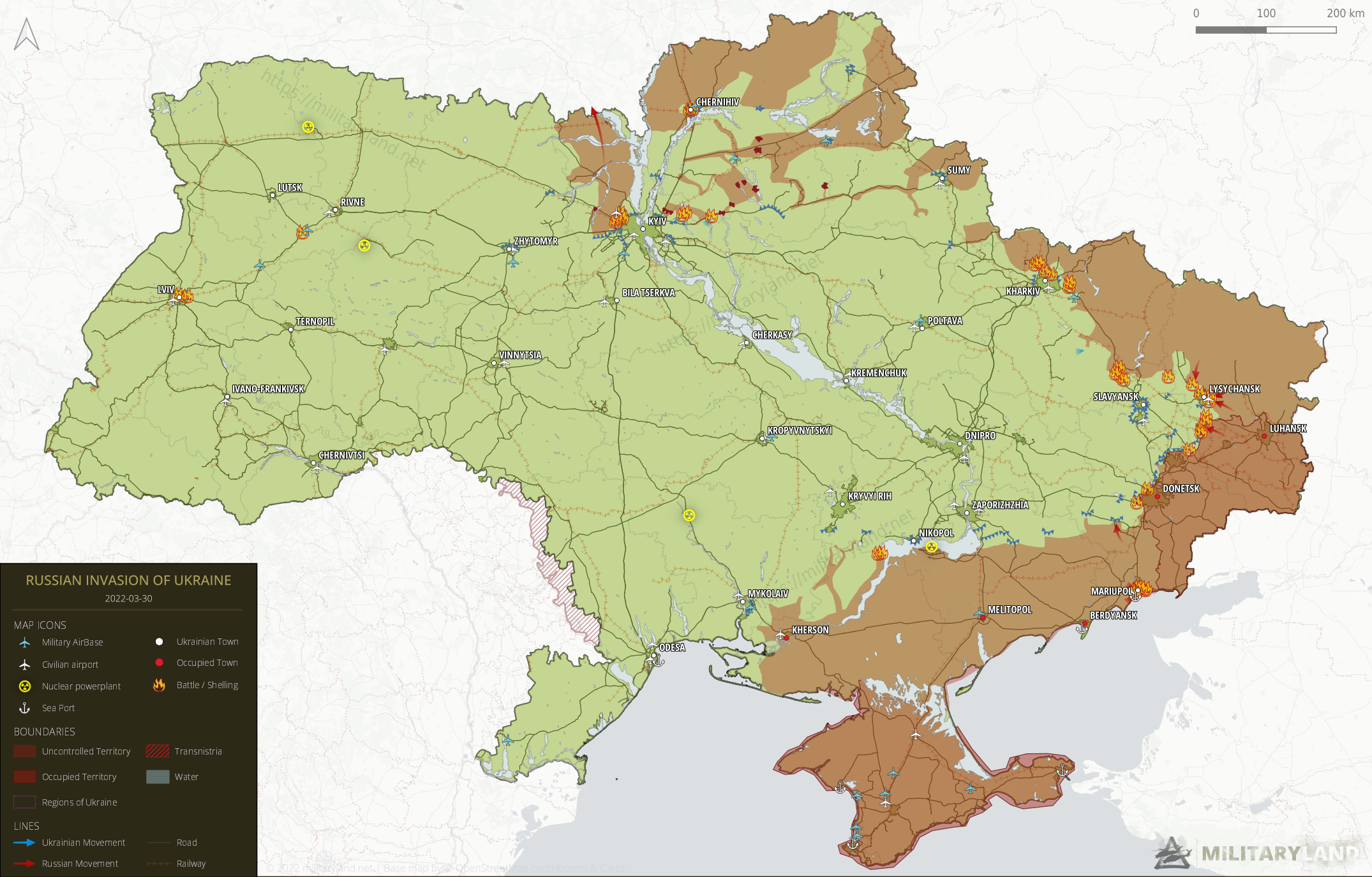 Chernihiv: Lukashivka and neighbouring Sloboda back in Ukrainian hands. Seems more of a voluntary Russian retreat, than active re-conquest.

Well we do not know this yet. More and more UA forces have been trained, armed and sent to frontline as we speak. I am not sure about moral of Russian forces as well.
Hard to tell. I know that some RA forces had been on polluted (Chernobyl) area and my opinion that is reason to pull them back from NW Kyiv area.

Russian shelling of Prudyanka, Slatyne, Bezruky N of Charkiw suggests that all three towns are back under Ukrainian control, or at least contested.

Good catches for Kiew and Chernihiv Oblasts – I had missed those.

Yesterday’s Russian afternoon briefing on FB reported a “break through” Ukrainian defences, towards the outskirts of Velikaya Novoselka. They furthermore report fighting in Житловка (next to Kreminna), and cleaning of Золотая Нива (no idea where that is) from “nationalist forces”.

well yeah, that’s what the map is implying

Ukraine took back control of Orlove, Zahradivka, and Kochubeyevka today from the Russian control salient Northeast of Kherson.

IMO as much I wish this is true, twitter account is not sufficient enough to claim something. Some photo, video or local mayor statement might prove this claim.

I somehow missed this, sorry. It’ll be part of the next summary.

Since when are Ukrainian General Staff announcements regarded as trustworthy? Remember, it’s not UGS’s job to tell the truth. Their job is to manage public perception of Ukraine’s war effort. Nothing more. For this reason, everything reported by UGS must be taken with a grain of salt.