The most critical situation for Ukrainian forces remains Donbas, mainly the city of Izium and Mariupol. Other frontlines remain rather stable and Ukrainian forces have been conducting a local counter-offensives to liberated captured areas. 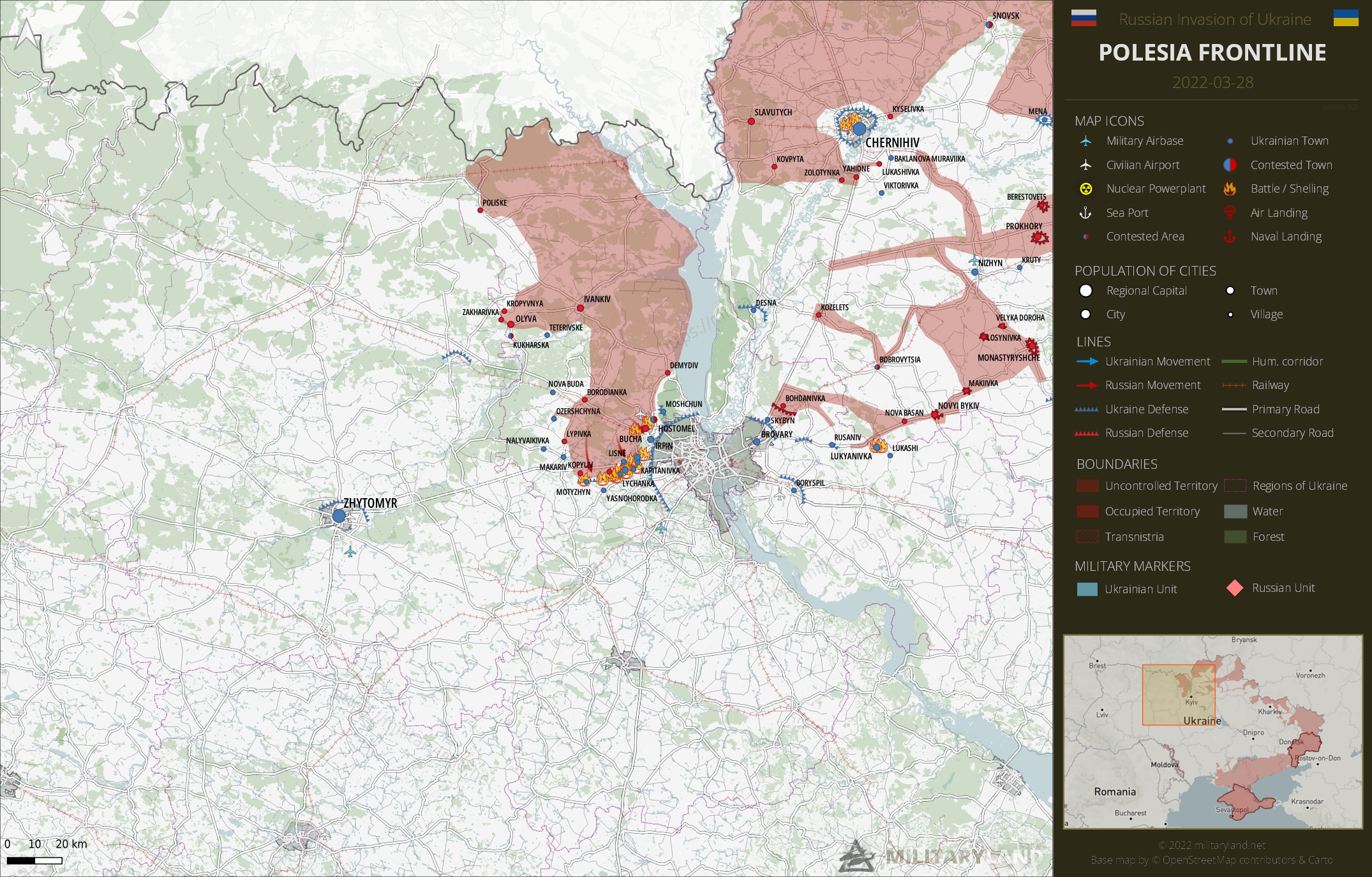 Correction: Ukrainian forces liberated Yasnohorodka on March 25 and Motyzhyn a day or two after. 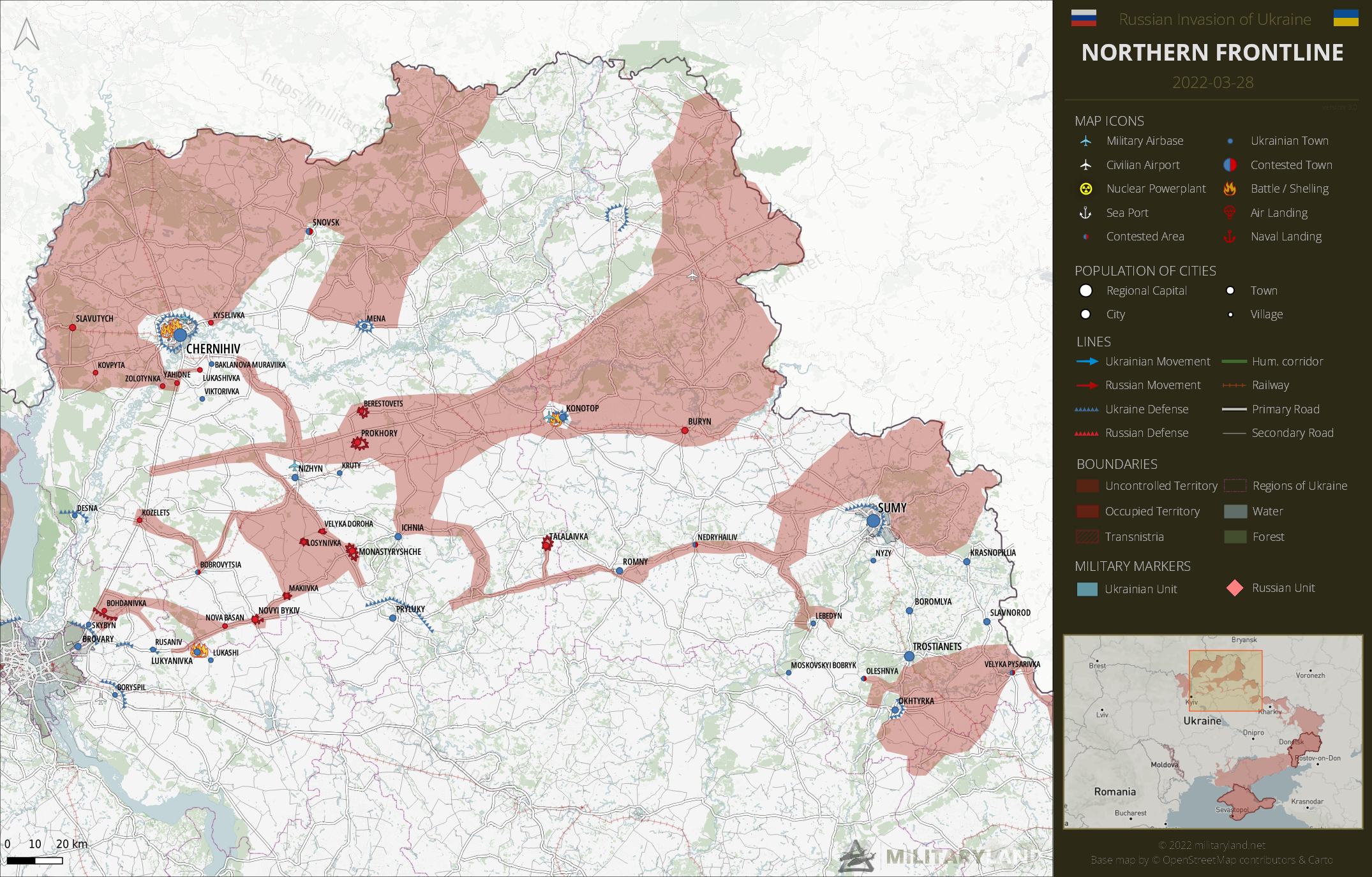 Russian elements stationed in Snovks withdrew across the river nearby and blew up a bridge behind them. Ukraine’s officials reported several more bridges being destroyed today in Chernihiv Oblast by Russian troops.

Chernihiv was the subject of shelling through the day.

Ukraine evacuated wounded civilians and military personnel from Trostianec to a hospital in Sumy. This indicated that the road between Trostianets and Sumy is safe and the Russian siege of Sumy is no more. 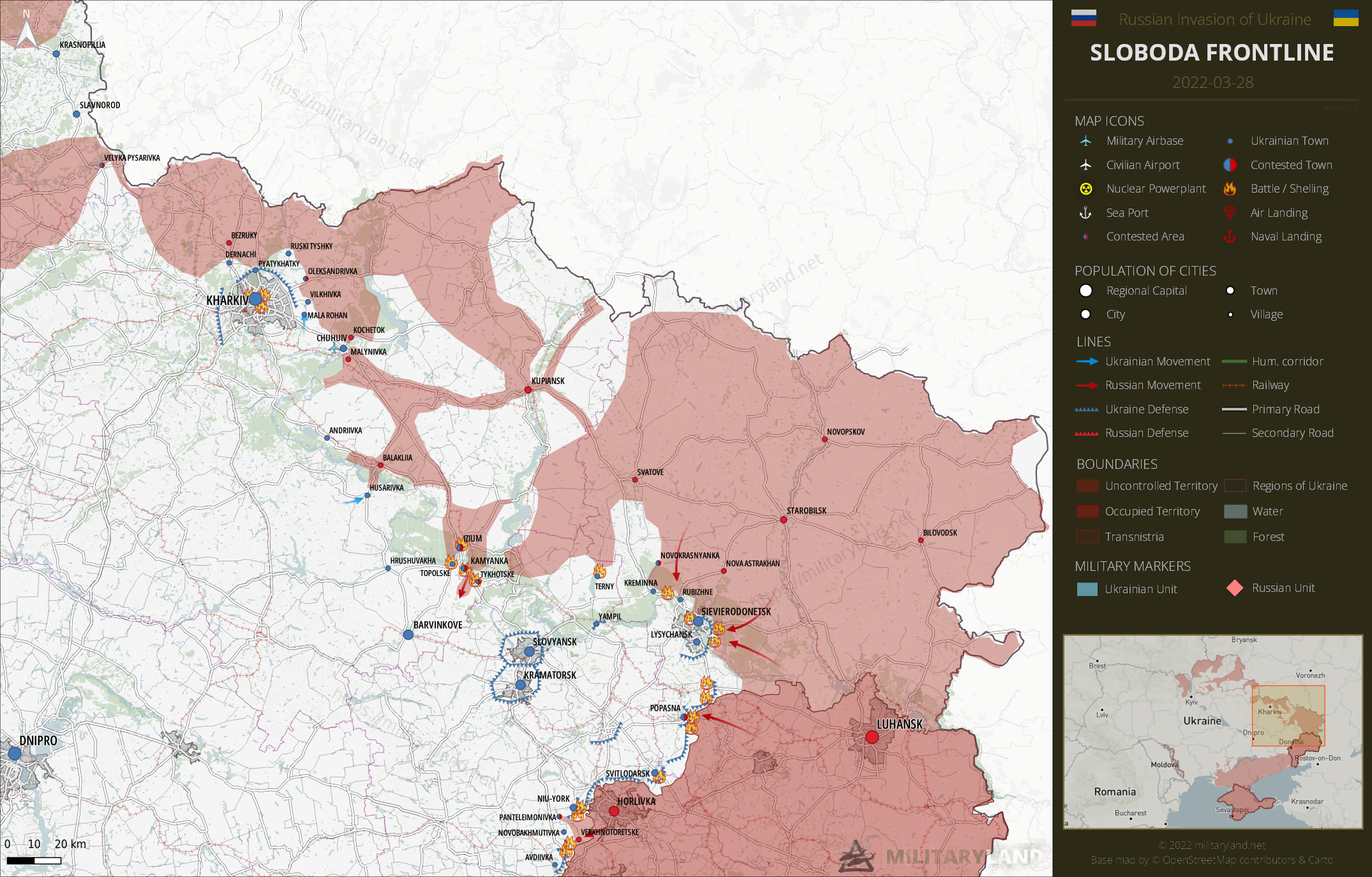 Ukrainian forces have launched a stabilization operation in the vicinity of Chuhuiv. Russian troops have continued to attack Ukrainian positions near Izium, namely at Topolske, Kamyanka and Tykhotske.

The spearheading element towards Slovyansk and Barvinkove has been reportedly stopped by Ukrainian troops. 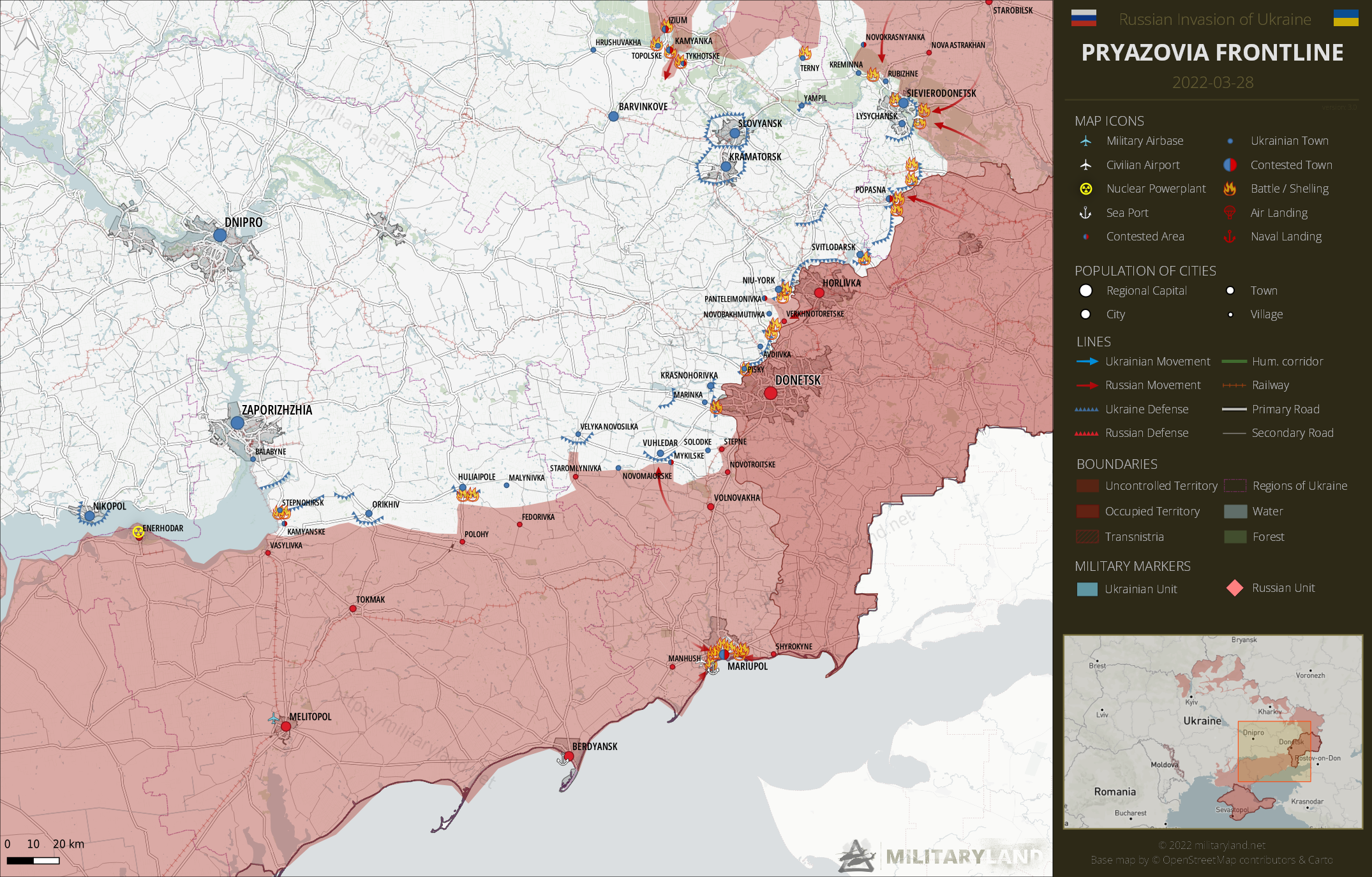 Russian forces attempted to breakthrough the lines near Vuhledar and Solodke. Ukrainian forces repelled the attacks. The enemy artillery worked near Pisky, Svitlodarsk and Marinka.

Russian forces attacked Ukrainian positions near Niu-York and attempted to break through the lines, without success.

Russian Army bombed Stepnohirsk and Huliaipole. Zaporizhzhia regional council confirmed that Fedorivka and nearby settlements are under Russian control. 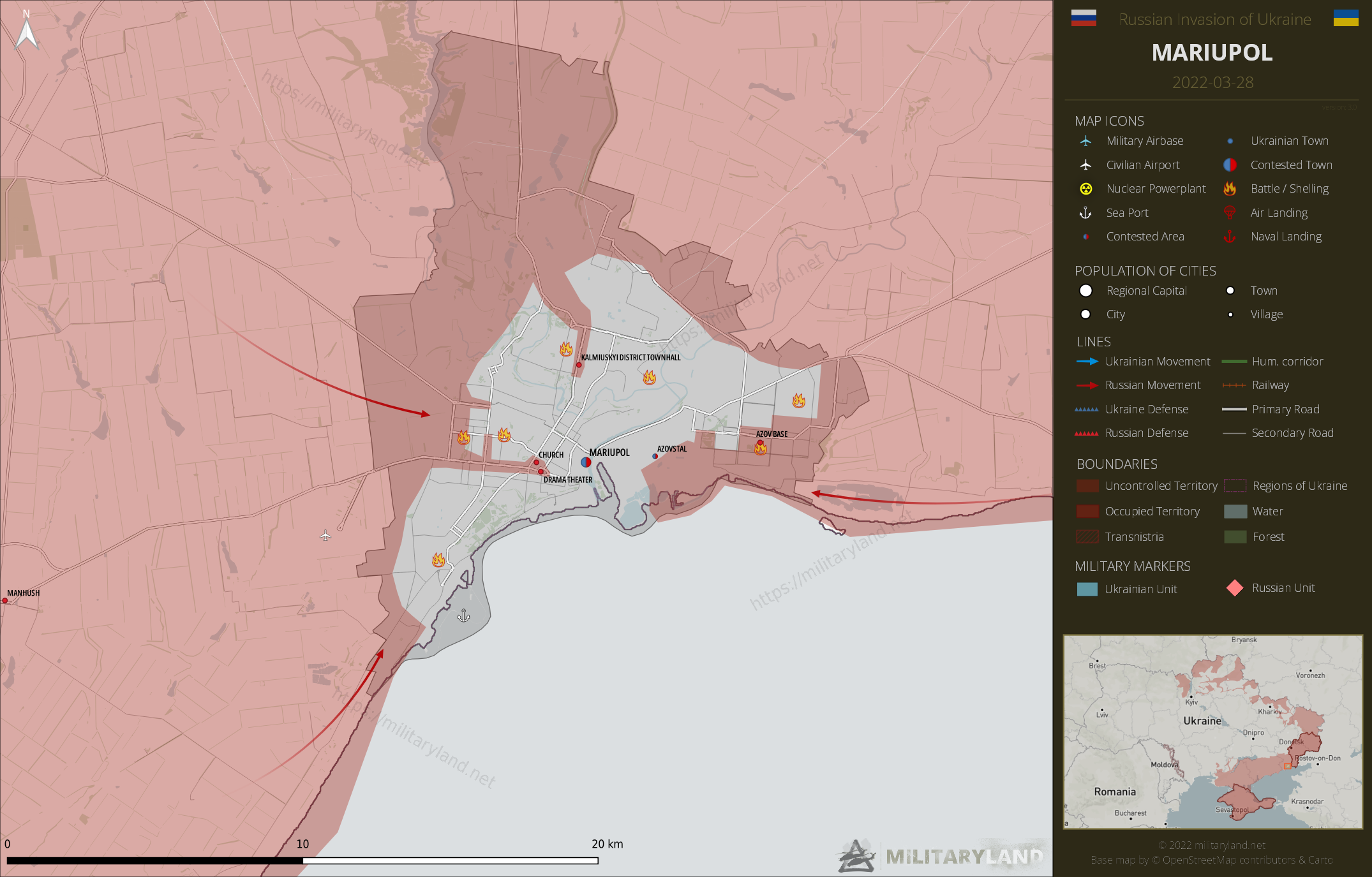 Russian troops reached Drama Theater in the city center, a townhall in Kalmiuskyi District and the base of Azov Regiment in Livoberezhnyi District. 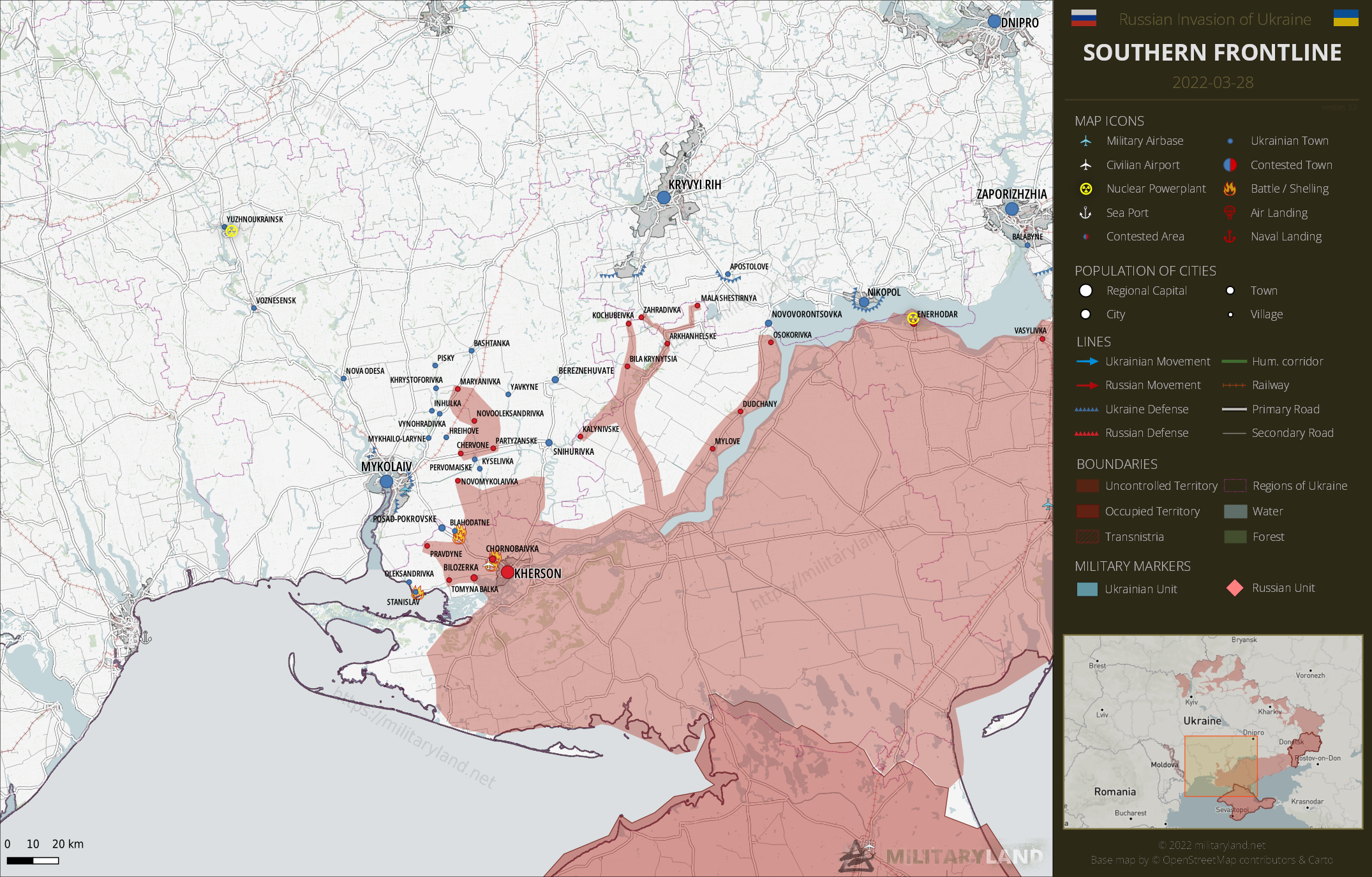 No combat was reported in Mykolaiv Oblast on Monday.

Ukrainian forces liberated Vynohradivka on March 26. Thanks Augusto14 for pointing this out. Given the Vynohradivka location, it seems logical that Inhulka and Mykhailo-Laryne is under Ukrainian control as well.

Russian Army shelled Yavkyne on March 24, which means it has been under Ukrainian control since at least that date. 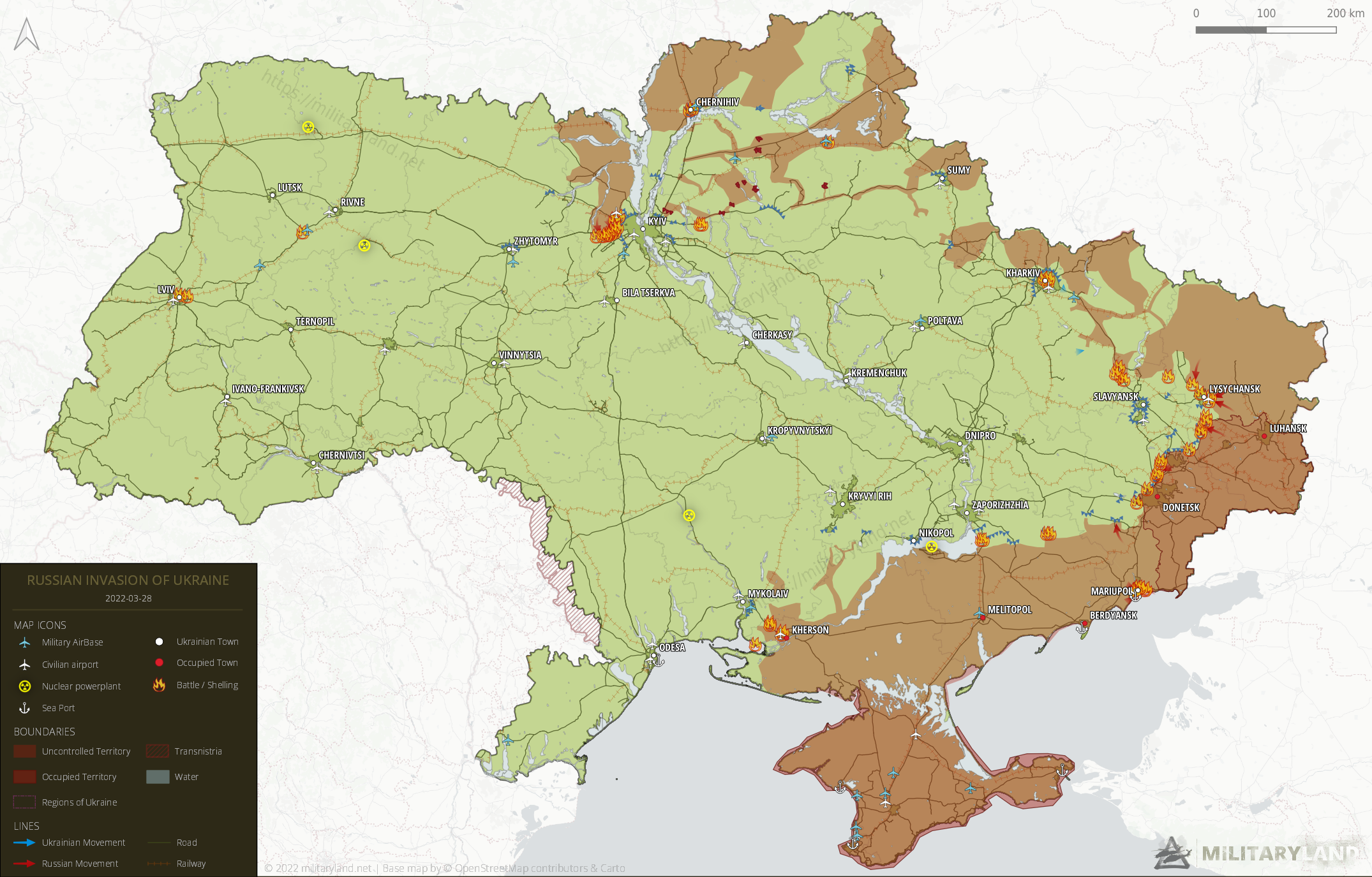 The Azov base in Mariupol was taken 5 days ago – https://www.youtube.com/watch?v=HPCl4MOckg8

According to a local Mykolayiv local press as well as Vitaliy Kim clips, Snigurivka is occupied.
https://www.0512.com.ua/news/3360082/usudi-e-problemi-mi-ih-virisuemo-po-cerzi-vitalij-kim-pro-situaciu-v-snigurivci-video

– The media is slowly shrinking its coverage of Ukraine. Its been over a month and people are getting bored. – “Peace talks” in Turkey today, nobody knows what will happen. Zelensky has said he will compromise over Donbass. – Roman Abramovich handed Putin a note from Zelensky, to which Putin told him to go f*ck himself (https://www.thetimes.co.uk/article/ukraine-war-roman-abramovich-skirts-sanctions-and-radar-in-role-as-the-go-between-7cg9vspqk). – The Abramovich poisoning was fake according to Reuters, CNN, and a source “close to Ukraine’s presidency”… Read more »

Truth will set you free
Reply to  @Xsern on Twitter

I wouldn’t trust anything CNN, Reuters, The Times, Daily Mail etc write they all write garbage lies. They all reported that Russian general Andrey Mordichev was killed supposedly the seventh Russian general to die, but then he magically appeared hugging and joking with Kadyrov during his visit to Mariupol – https://www.youtube.com/watch?v=OSFw8KmqGzM

Ukrainian Prawda has somewhat more extensive situation briefings than the FB page of the UA Ministry of Defence. On March 28, timestamp 09:49, they reported for Cherson region hostilities in: “Wysokopol [Wyssokopilja], Welyka Oleksandriwka, Beryslaw, Snigurjiwka, Stanislaw.” Stanislaw is clear, and captured on your map. I am unsure what to make of Beryslaw. If their was fighting, it would rather have been with partisans than with the UA army. Interesting, however, especially when placed on… Read more »

In this context, this pretty recent briefing by the Head of the Kryvyi Rih military administration looks notable. According to him, an offensive is under way, and several villages in northern Cherson Oblast have already been reconquered. No village names given, but he says that Russian troops are at least 40 km, rather 60 km away from the city now [raising the question whether he means the city limits, or the centre..]

Looks like the Ukrainian Army attempted an attack on Kherson, without much success, and Stanislav was used as a staging area.

Do we know definitively that the entire 1st GTA pulled out in it’s entirety or are elements left protecting highway H07?

eyes continuously looking up and to the left clearly indicates that he is lying, making up what he is talking about

I don’t know if this is staged but that’s him.