Ukrainian troops reached the border with Russia in Sumy region, while Russian forces have continued to put a pressure on Ukrainian defenders in the vicinity of Izium in Kharkiv Oblast. 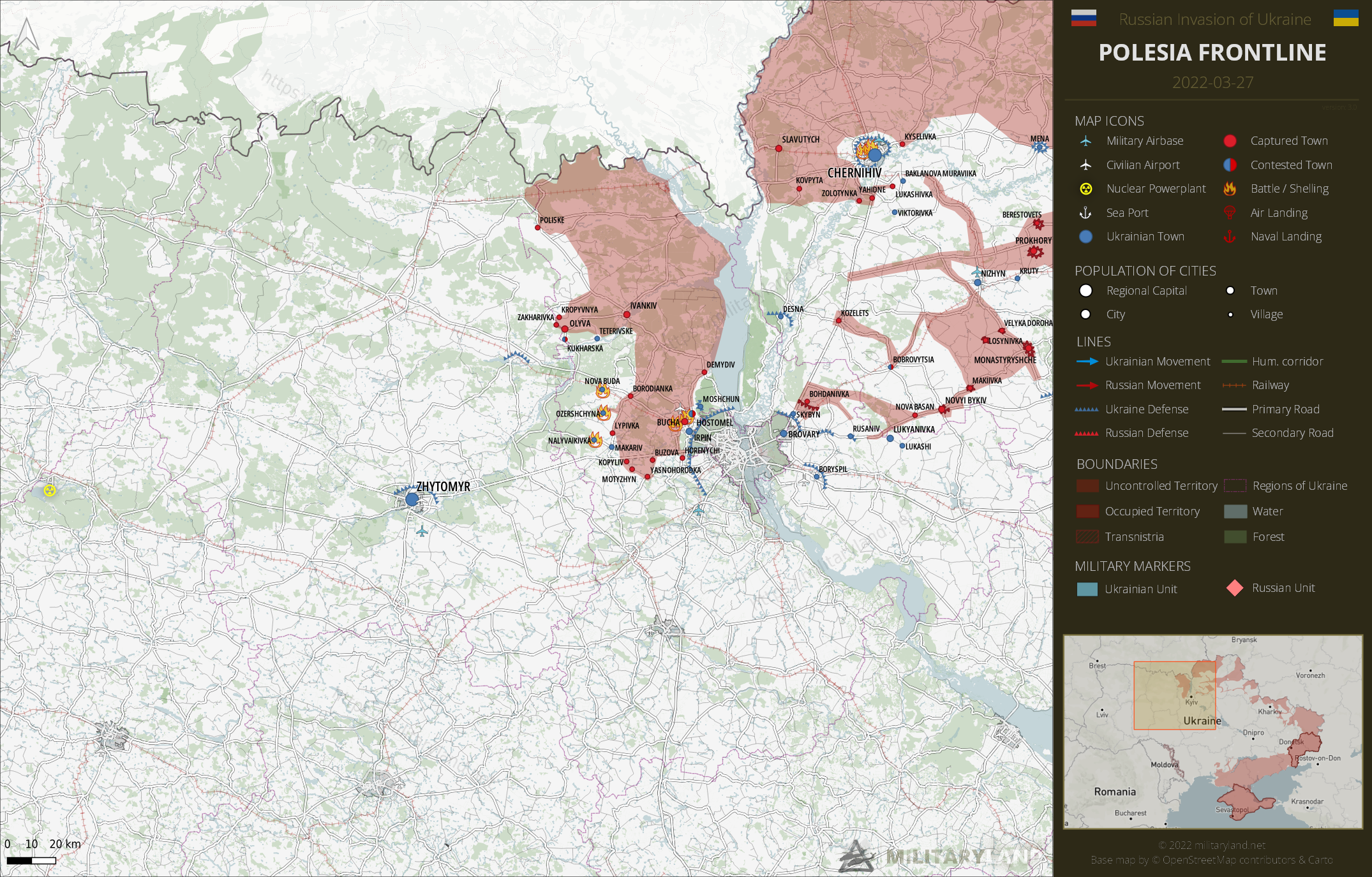 Heavy fighting has continued in the vicinity of Irpin and Hostomel. Neither side reported territorial gains or loses. 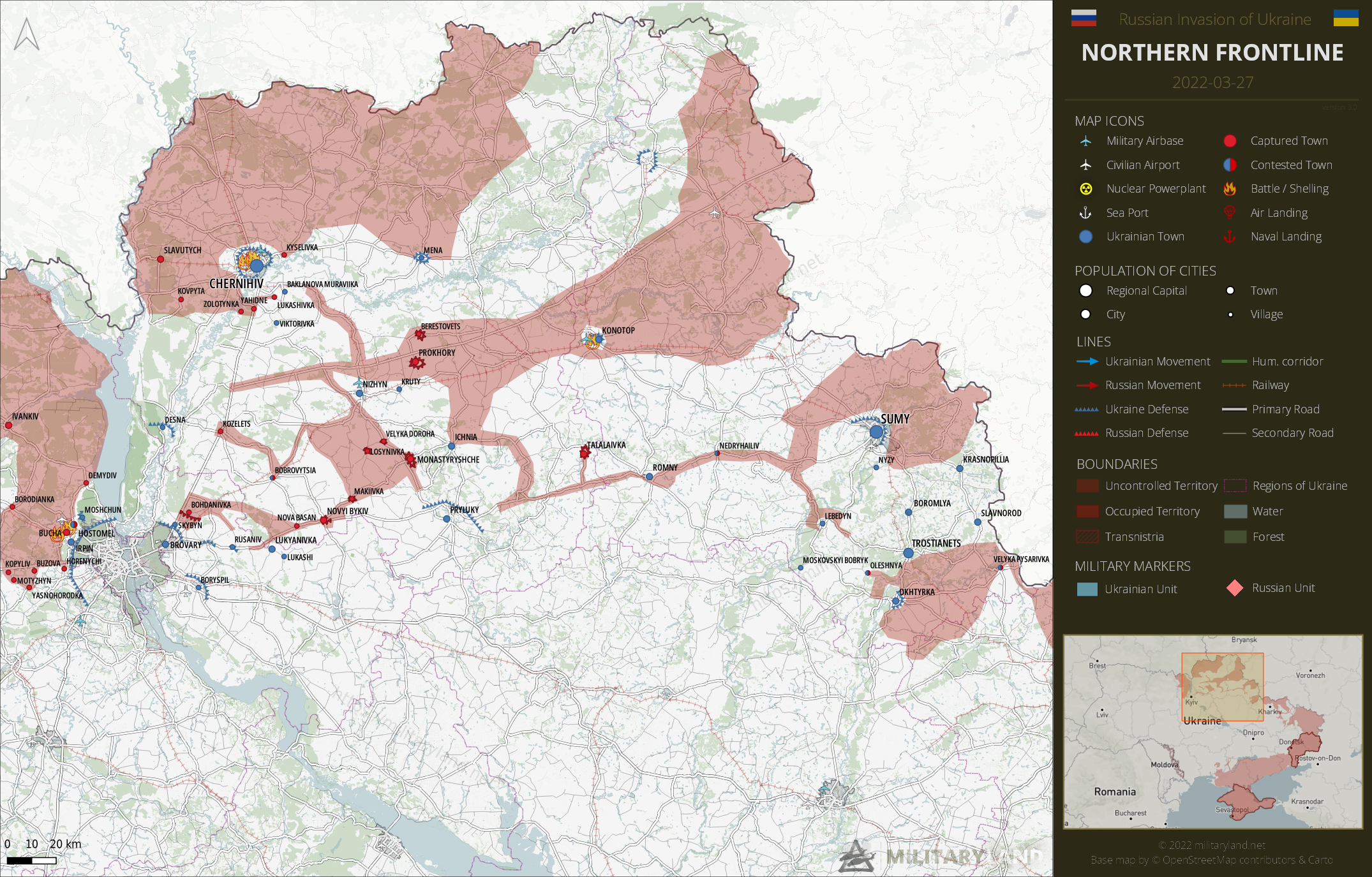 Russian troops left the town of Slavutych, but remain in the vicinity. There is no presence of Ukrainian troops inside the city or nearby.

The regional capital witnessed the first quiet night since the beginning of Russian invasion. In the east, Ukrainian troops entered Slavnorod, Krasnopillia and reached the border with Russia. The operation to deblock Sumy will start soon. 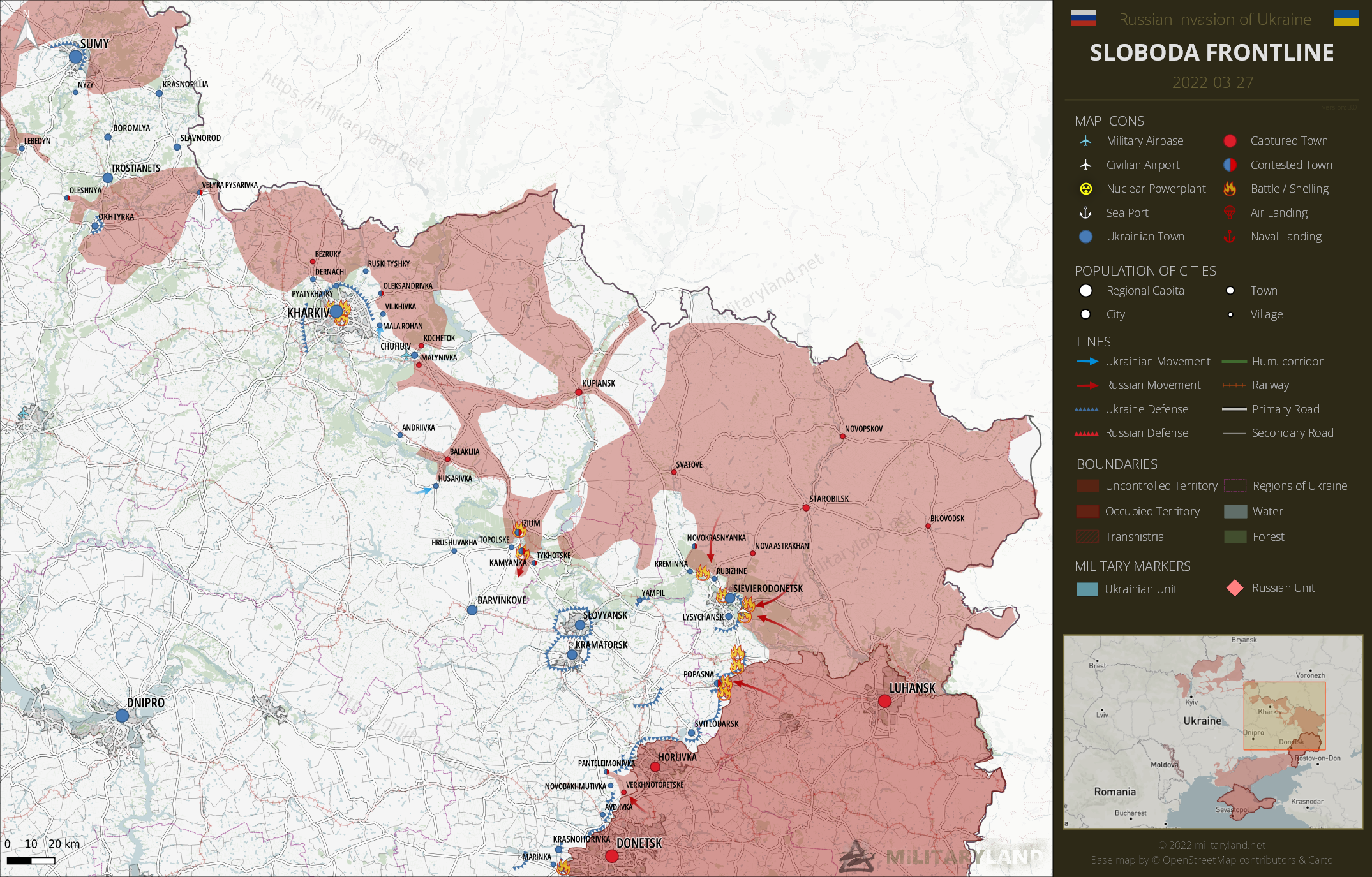 Ukrainian forces regained control over Husarivka, eliminating a possible threat of the new spearheading element in the area. The situation in Izium is critical. Russia troops reportedly made some gains in the southern part of the city, while the elements near Kamyanka have been pushing south.

The situation in Luhansk Oblast has remained unchanged on Sunday. Heavy fighting was reported in the vicinity of Rubizhne, Sievierodonetsk and Popasna. 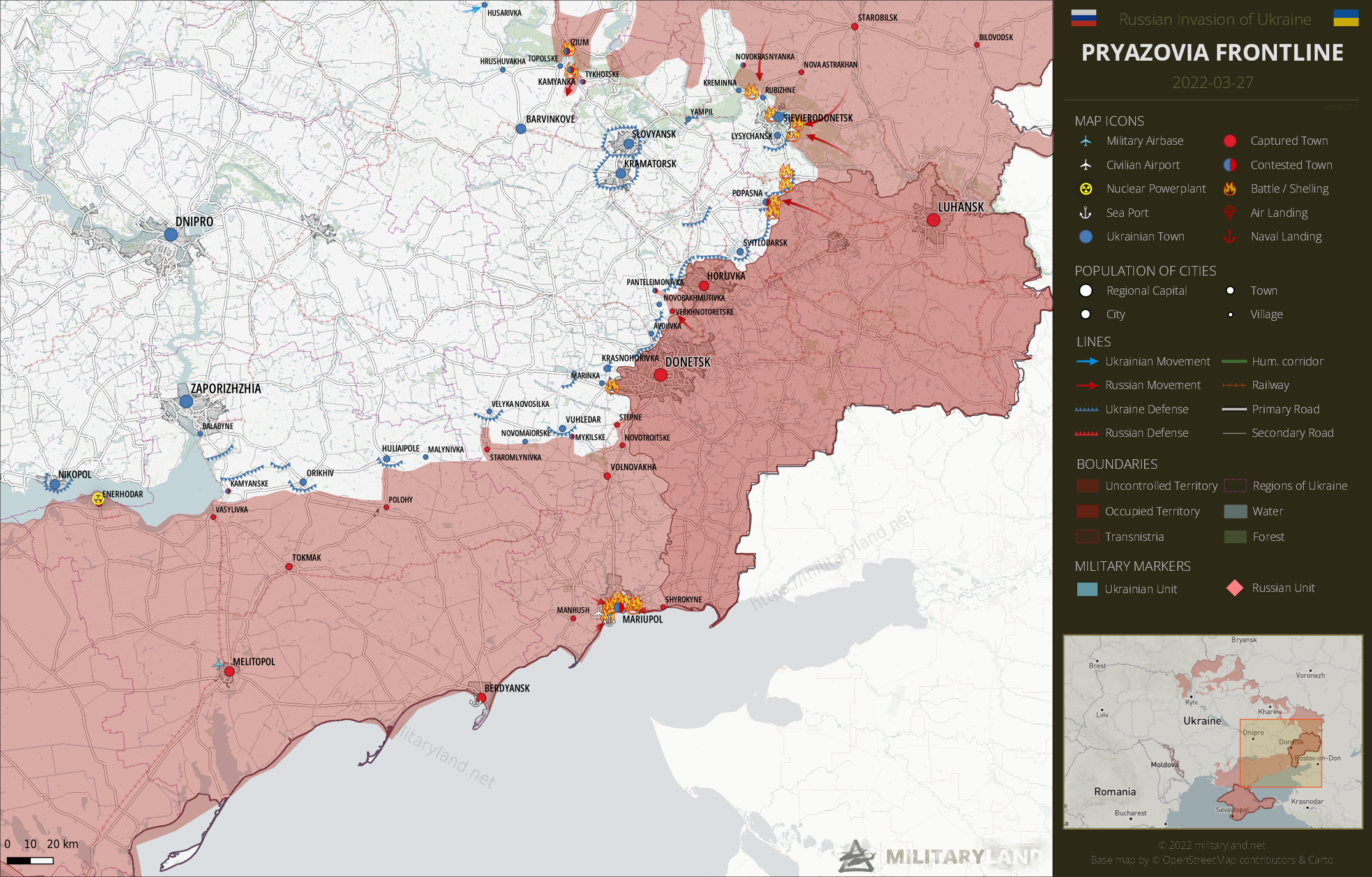 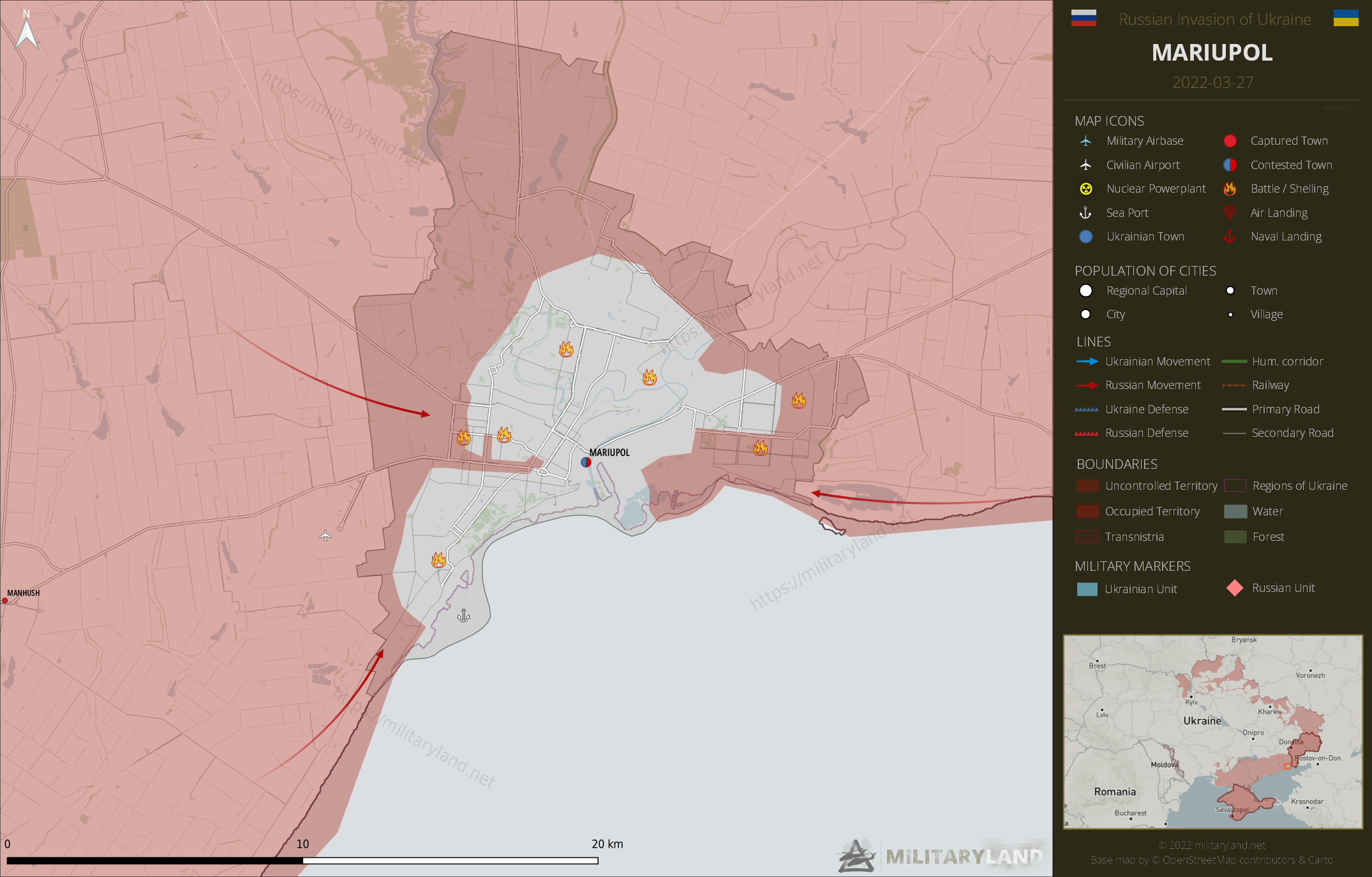 Ukrainian forces reportedly repelled all attacks towards the center of Mariupol. The fighting continues, but the morale of Ukrainian troops is high. 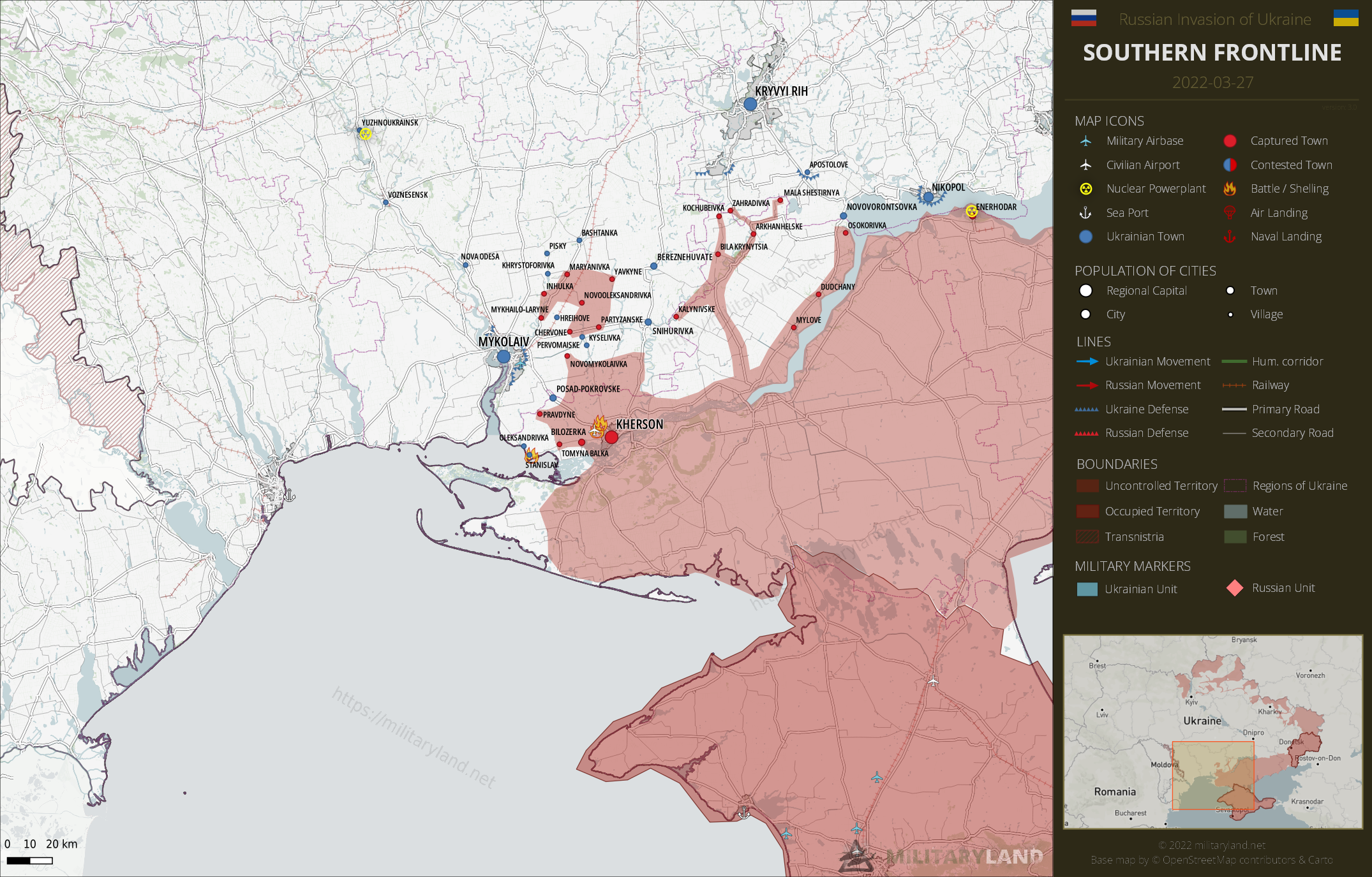 Russian troops shelled a village of Stanyslav, confirming the presence of Ukrainian troops in the village. 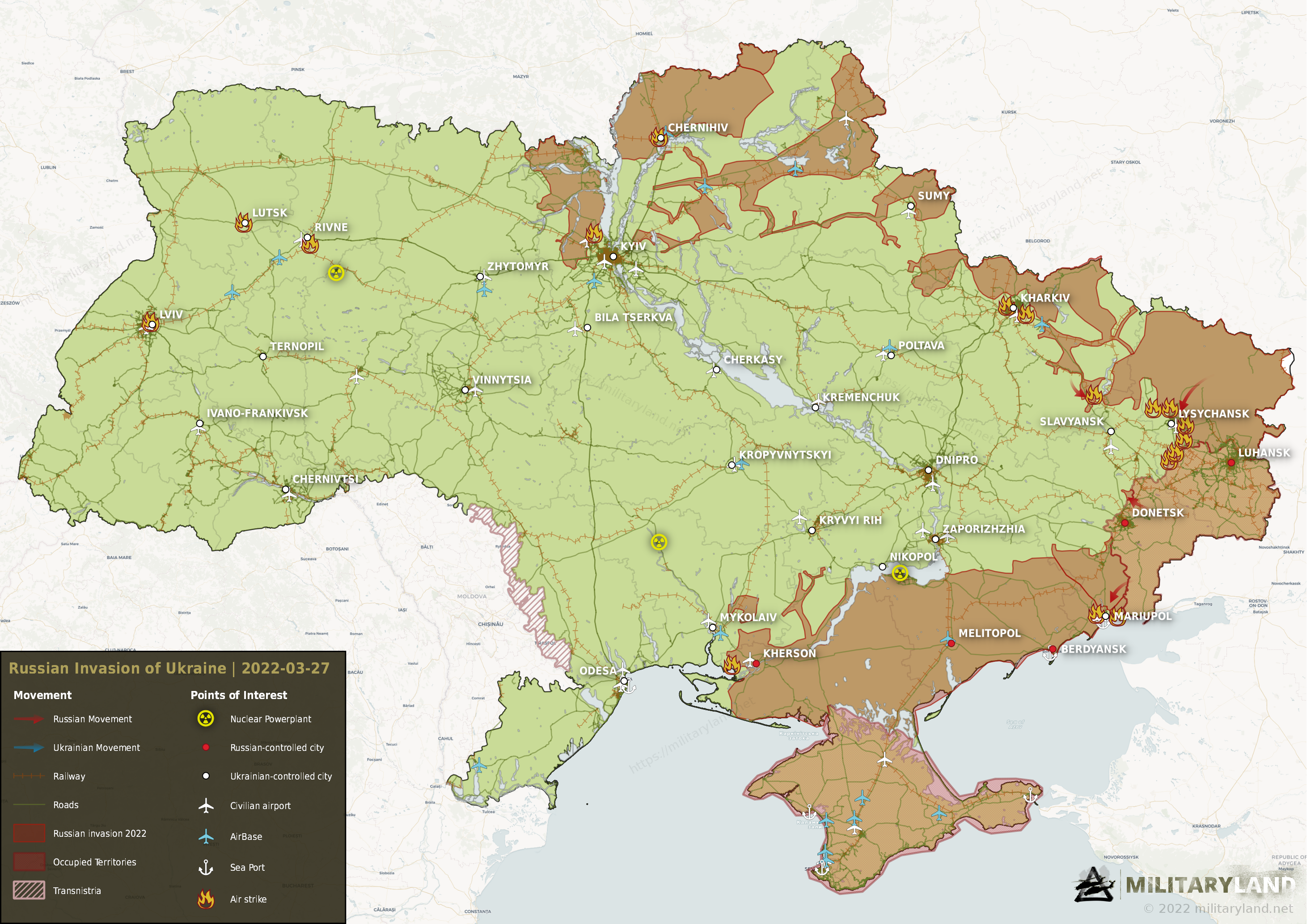 https://www.pravda.com.ua/news/2022/03/28/7335329/ The second last paragraph reports Russian shelling of Lebedyn, Velyka Pysarivka, Oleksandrivka and Velykyi Sambor (all Sumy Oblast), which should mean they are all under Ukrainian control by now. The first two have already been marked as such in your map. Velykyi Sambor lies a few km SW of Konotop, in an area your map already marks as Ukrainian-controlled. Pretty accurate mapping there, I would say. Oleksandrivka, just next to Velyka Pysarivka, OTOH, is… Read more »

I don’t understand why you take all information from Ukraine’s government but only information from DPR and LPR (and still only with a grain of salt like only Russian will lie and Ukrainian will tell all the truth). How about extra information from Russia Ministry of Defence to balance the information so that your report will be less bias?

To prevent any bias whatsoever, you should just report the exact opposite of what Russia’s government claims. If you assume the Russians lie all of the time, you might just be correct most of the time.

And that is exactly how you create a bubble around yourself. Remember the 13 heroes of Snake Island? Russia have been reporting news that there are 82 people instead and they are all alive, not dead like Ukrainian confirm (yes, they confirm all of them dead).

Ukrainian media confirmed they were alive around the same time Russian media did.

Lol, 1 day right after the story about 13 Snake Island “heroes” appear on Ukrainian news, Russian news already report about 82 POW from Snake Island. It’s like a week later that the Ukrainian army release statement admit they were alive.

is there any reliable info from russian ministry ?

Oh well, technically a war is something that must be _declared_ on a state level but so far neither side bothered to do so for some reason.

They report alot every day not just L/DPR front, basically every fronts. Sure both side did propaganda but it you left one side out just read updates from Ukrainian government then you will only see the war under Ukraine’s propaganda and not really the full view of the war. It’ll be Nagorno-Karabakh conflict all over again when everyone was thinking Armenia is winning until they surrender.

Thanks a lot for report

Your map still shows the Russian arc around Sumy crossing the road between Sumy and Boromlya, as well as a residual pocket still cutting the road around Okhtyrka. However, Yaroslav Trofimov claims that the road between Sumy and Poltava is now open (https://twitter.com/yarotrof/status/1507974565670133762), and that a widely-shared video depicts the “Sumy deputy governor … driving to Trostyanets from Sumy via Boromlya” (https://twitter.com/yarotrof/status/1508029307507015681). And Zarina Zabrisky attributes info to “Sumy CAA Dmitry Zhivitsky” that “the city… Read more »

Your map still shows the Russian arc around Sumy crossing the road between Sumy and Boromlya, as well as a residual pocket still cutting the road around Okhtyrka. However, Yaroslav Trofimov claims that the road between Sumy and Poltava is now open (https://twitter.com/yarotrof/status/1507974565670133762), and that a widely-shared video depicts the “Sumy deputy governor … driving to Trostyanets from Sumy via Boromlya” (https://twitter.com/yarotrof/status/1508029307507015681). And Zarina Zabrisky attributes info to “Sumy CAA Dmitry Zhivitsky” that “the city… Read more »

At this point, I think Kyiv is just a distraction to divide supplies and encircle the Ukrainian forces in the east.
It is difficult to get objective information nowadays since one side is practically canceled (Russia) and the other is full of propaganda.

I never questioned his integrity, it was more a compliment for his work than an attack (it is difficult to have objective information as the one he presents here). Maybe because I mentioned that the Russian side of the story is canceled you got irritated. In every conflict you need to analyze both points of view, otherwise, you can be easily manipulated. You cannot denied the media manipulation coming from the West too. This report… Read more »

Are u 4 real?
Reply to  Anonymous

Wtf are you talking about? What kind of information do you expect from russian side? More lies wrapped up in even more lies? This goddamn country is committing all the worst and all the possible war crimes. They don’t give a damn about anything, no rules exist to them. TBH it’s behaviour doesn’t surprise me anymore, what still surprises me is how naive or how brainwashed some people are.

Anonymous
Reply to  Are u 4 real?

You are a perfect example of my post, people are completely biased. You can dislike Putin, but you have to be objective and understand the reasons and context of this conflict. I mean the US invaded Iraq because they “had” mass destruction weapons, that made Bush a war criminal? It is a war, but Ukrania is as corrupt as Russia, yes they are the victims here but they are no saint, don’t forget that this… Read more »

As long as Ru forces around Kiev don’t get cut off and encircled I think they will try to hold as long as they can and Kremlin will be proclaiming that as part of the plan and strategic victory. Kremlin doesn’t care about large losses as they can control and cover those up talk over with propaganda. Their bigger fear is that the offensive will be perceived by ordinary Russians as a failure by incompetent… Read more »