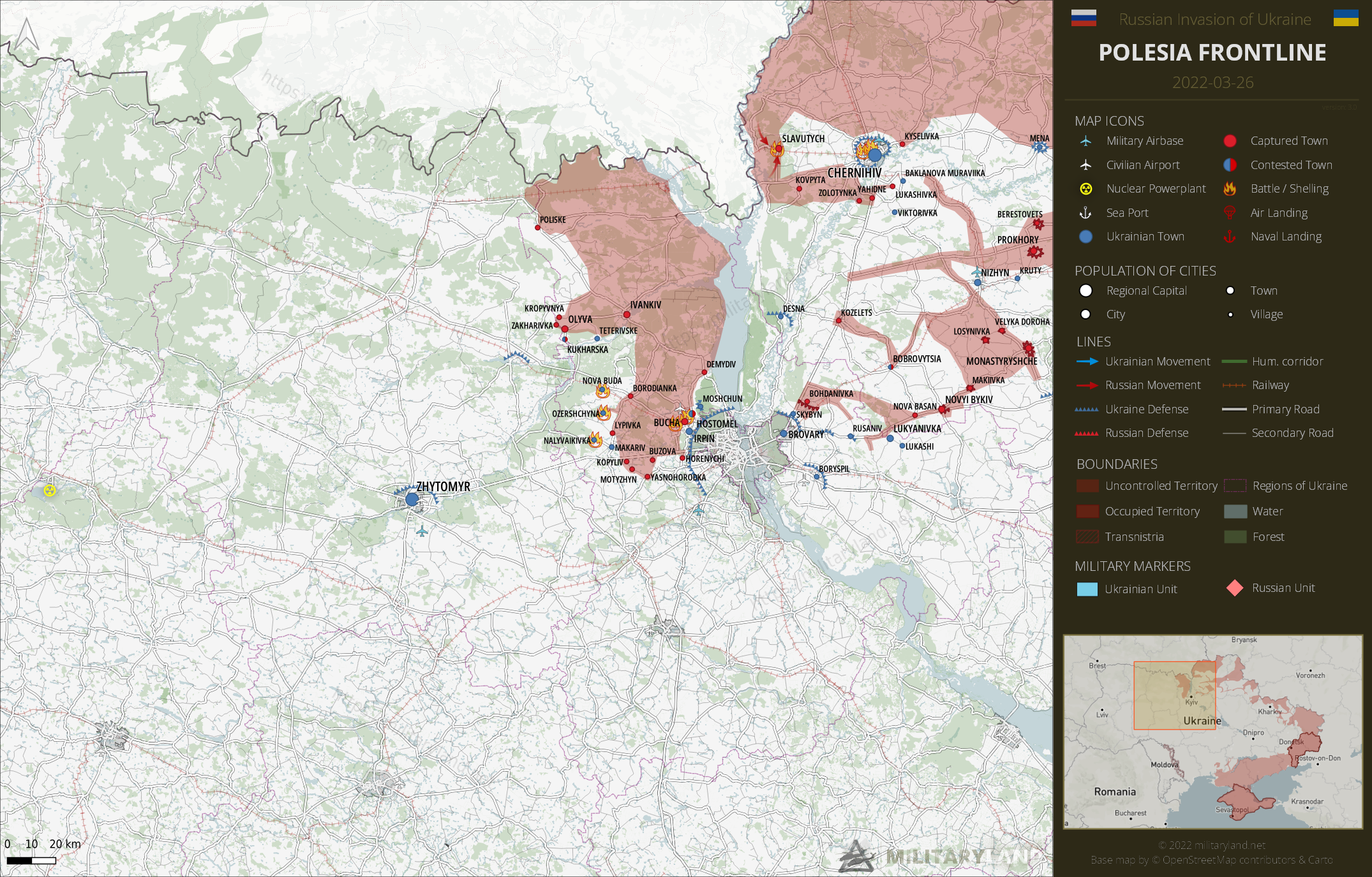 Journalists located in Kyiv reported heavy battles in Irpin and Hostomel. We have no further intel on the situation there. 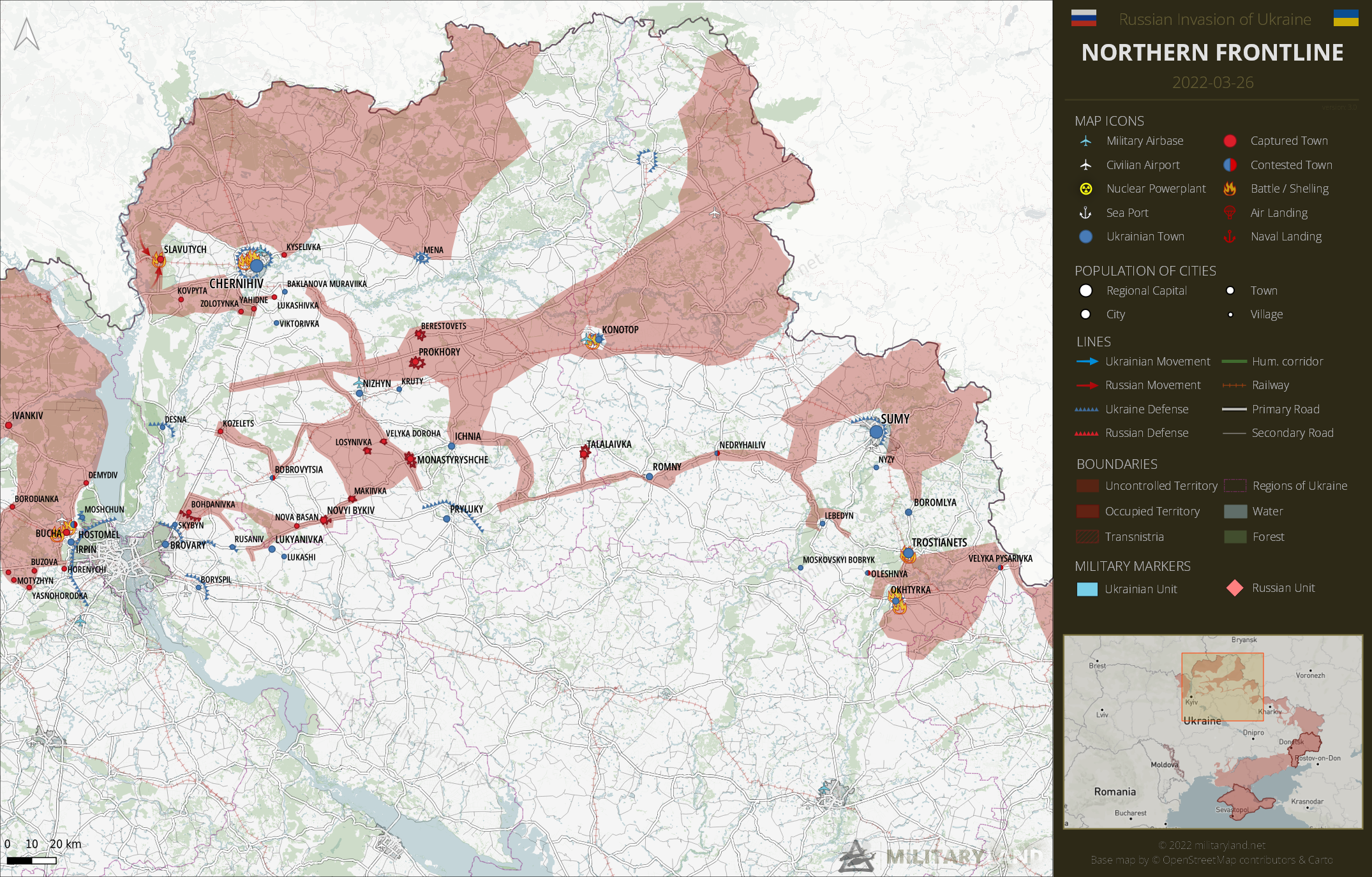 Russian troops entered Slavutych and set up checkpoints at the entrances. The residents gathered on the main square and protested against the occupation.

I wrongly marked Boromlya as unoccupied until today, apologies. The fog of war. 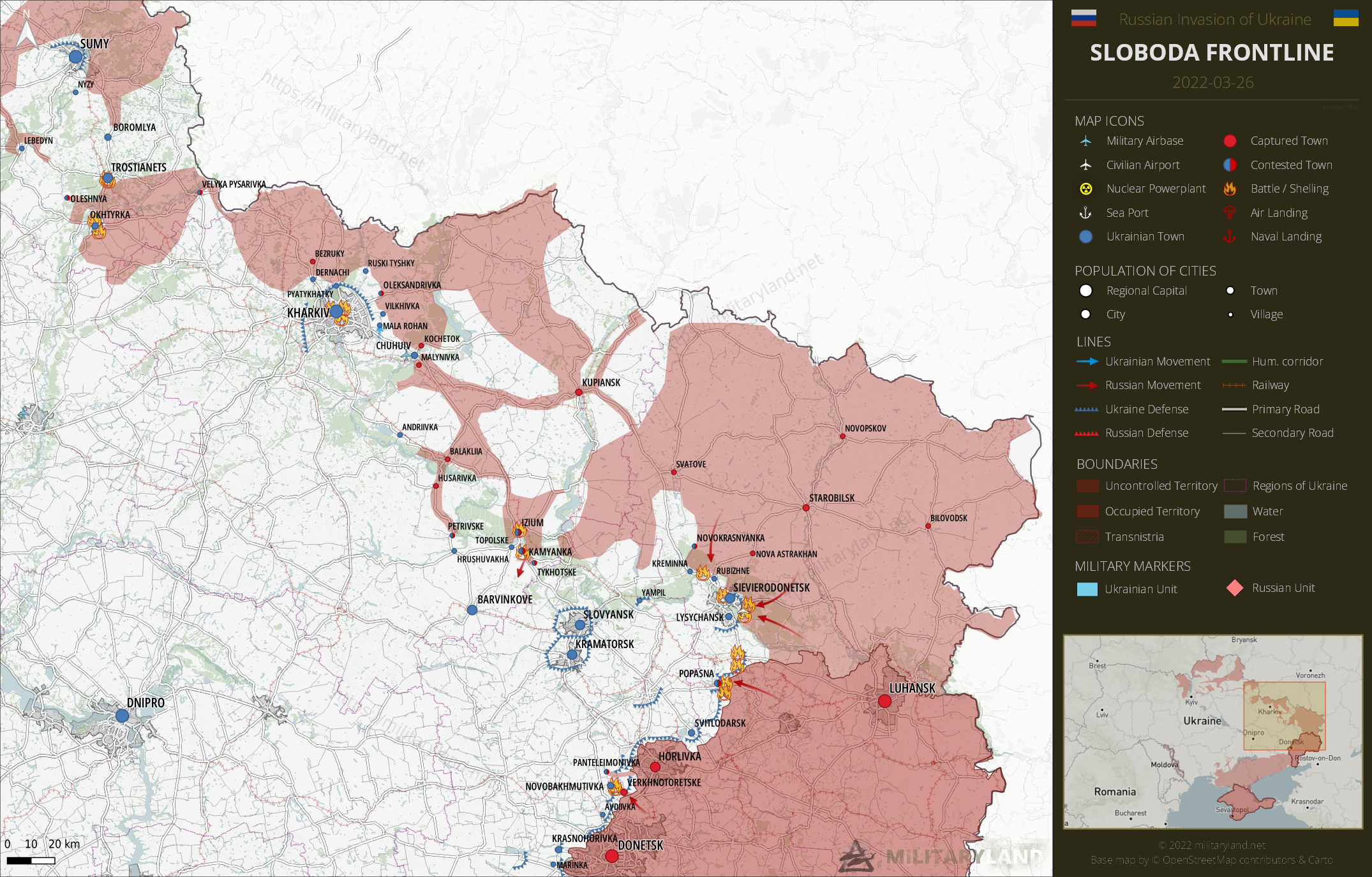 Russian forces shelled Kamyanka (near Izium) by TOS-1 flamethrower system. Ukrainian troops are reportedly still present in the southern part of Izium. The command of Ukrainian Forces said that Russian reconnaissance groups have advanced towards Barvinkove and Slovyansk.

The enemy assaults on Rubizhne, Sievierodonetsk and Popasna remains unsuccessful. 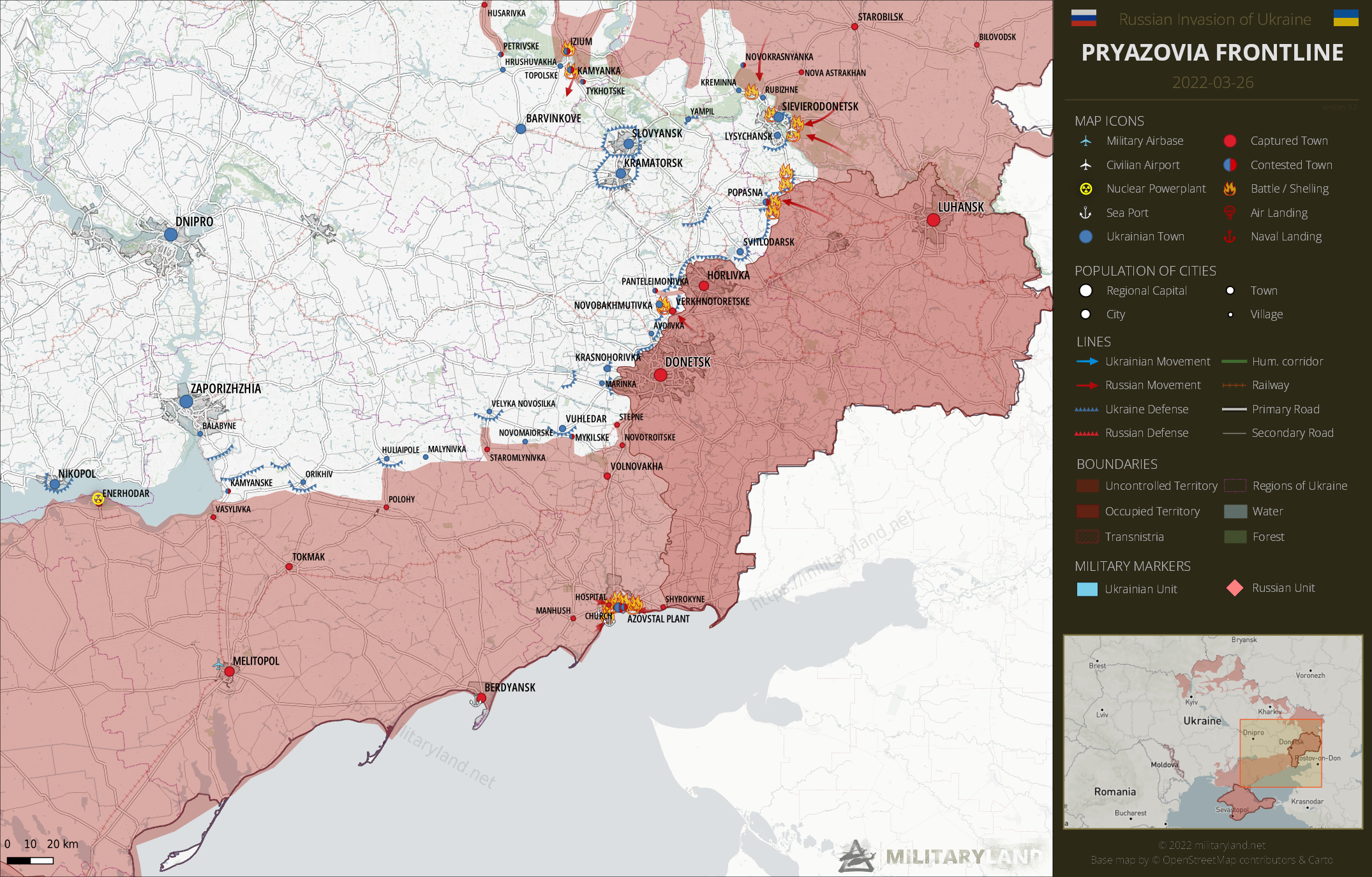 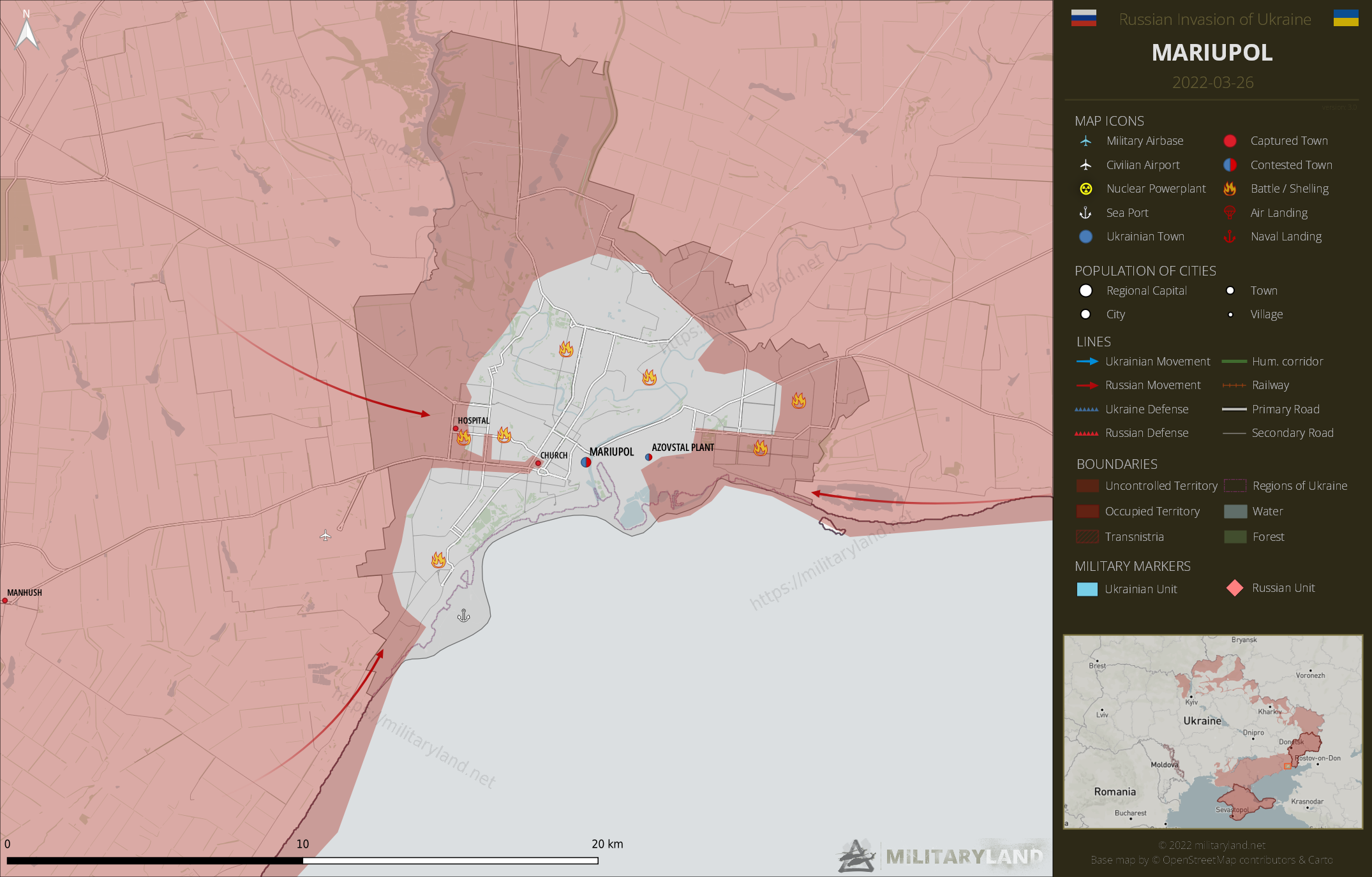 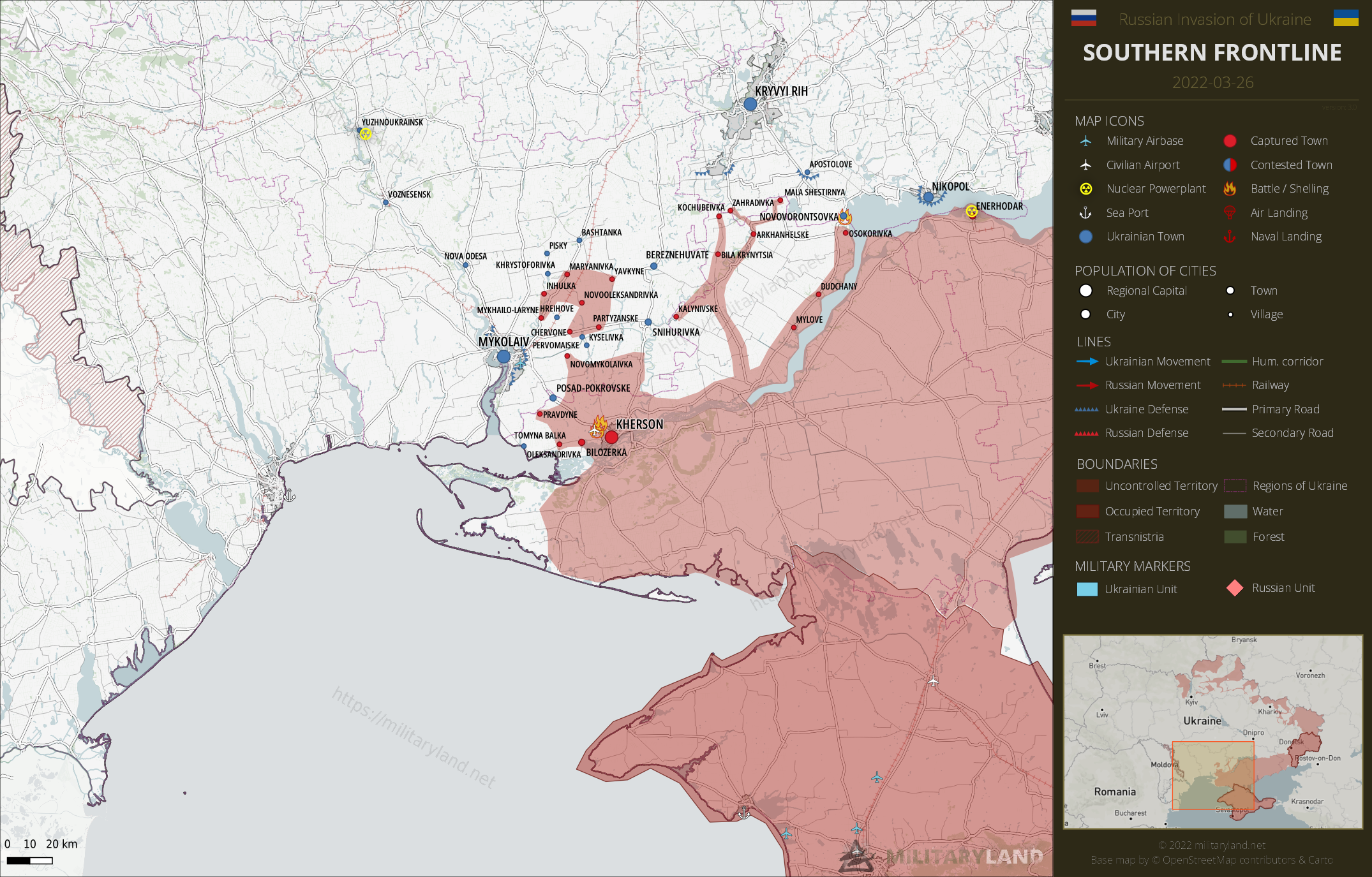 The status of the Russian element in the area of Inhulka, Yavkyne and Partyzanske remains unknown at this moment.

Russian Army shelled Novovorontsovka, the village they lost yesterday. Ukrainian forces reportedly advancing towards Kherson, but we have to yet see the proof. 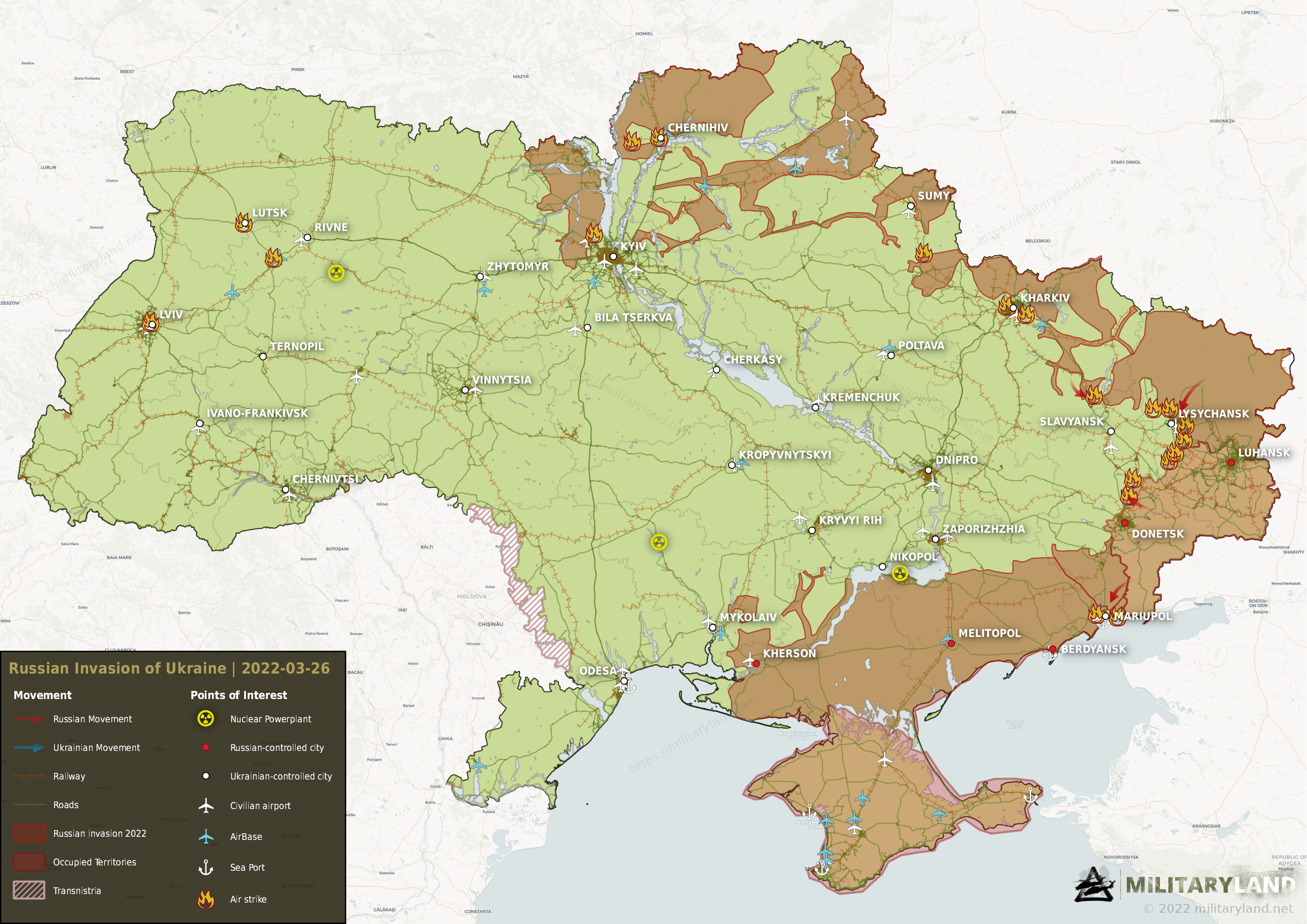 As to Mykolaiw region, you might find this Estonian TV report, with English subtitles, interesting. Obviously, Vynohradivka has been retaken by Ukrainian forces (or rather been given up by the Russians). Since that village lies immediately west of Inhulka, I seriously doubt that there is still any Russian presence in Inhulka.

OTOH, some fighting north of Mykolaiw is still reported, meaning that here and there some Russian control should be left.

Regarding the Russian announcement about the change of tactics, well, not exactly, Russian command announced that Donbass was the primary objective from the very beginning. “The presence of Russian troops in the area of Ukraine’s blockaded cities restrains Kiev’s forces. Initially we did not plan to storm them in order to prevent destruction and minimize losses among personnel and civilians. Although we do not rule out such a possibility, as individual groups complete their tasks,… Read more »

You missed one very important point — Published date : 25th March 2022. (well, clearly, the state-media could say anything to cover his country’s blunder in “current stage”, so no matter how the Russian media tried to cover up, it’s unconvincing) Another point is : if the Russian primary objective is merely the “liberation of Donbass” as he claimed, why did he launch a full-scale offensive throughout Ukraine along the very-wide front from so many… Read more »

I have no idea what was the original plan and if it’s still relevant, neither I have all the data to judge what’s necessary or not and nothing is obvious to me at all. Having said that the official version provided by Russians seems consistent with the map that we are seeing today. As of now Ukrainian army in Donbass is pinned down, providing supplies and reinforcements to it is very difficult and there is… Read more »

You don’t need to know about what’s the Russian planning to understand their basic / overall strategic objective — their movement has revealed their purposes. If the Russian General Staff’s “initial primary goal” was just the liberation of Donbass, then what’s the advantage of sending huge amount of troops to attack such a vastly-wide front over 1,500 km long ? Such commitment of manpower and resource was totally disproportional with the much smaller objective of… Read more »

Taking Donbass and destroying the Ukrainian army is anything but simple, my understanding is that both sides were preparing for this for years, given that both armies are quite capable, surely their respective plans must have been quite sophisticated. I guess we’ll see, if Russian narrative even remotely reflects the reality, there will be significant developments in April. If, on the other hand Ukrainian story and the astonishing numbers that they provide are correct, the… Read more »

From the outset, Russia’s goals have been vague and elusive. The Western world believes that Russia’s purpose is to annex the entire Ukraine, which is obviously their imagination. But why is there a need for such a war if it is just to protect those two independent and divided regimes? In fact, at the beginning of the war, there were some analyses that Russia wanted to ensure a high degree of autonomy in eastern Ukraine… Read more »

Why is konotop always marked as still in Ukrainian hands? didn’t the Russians capture it on February 25?

From my understanding the Mayor declared it open and basically surrendered the city in return for no change in admin.

Since this site focuses on military not political it should be marked as taken. But there could some issue about Russian forces avoiding to enter the city, hence not marked as taken.

Ok thank you for clearing that up somewhat.

So Russians are making pincer moves from South (Avdiivka) and North (Izum) to encircle best Ukrainian units in area of Slovyansk-Kramatorsk. IMO relocating military units from Sumy/Kharkiv region to aforementioned area.
https://twitter.com/ChristopherJM/status/1507852956070260741?s=20&t=DRXt8NteW_qkvj7K74nn0w
That is why we see some Ukrainian success in area of Kharkiv and Sumy.

It will be very hot summer.

“Russians are introducing conscription in Russia”
this document is a Ukrainian forgery. there are two grammatical errors in the stamp, and in one of the errors the word russian is written as rusian. Росийской вместо Российской

Grammatical error yes, forgery maybe. What possible motive Ukrainian side will have to do this? For Ukrainians it s the same thing with or without Russian conscription they have to fight to survive.

looks great again, those maps of yours. Would you consider putting invasion maps into “gifs” with date stamps that would show the ebb and flow of forces over time? Not sure how difficult it would be to do but could help understand the motion of units.

Thanks again for all you do!

Thanks for the presentation.

The map of the salient down to Kyiv west of the Dnieper needs tidying. The coloured occupied zone as shown would suggest that the entire Russian force is cut off from resupply, since the road from the border, through Poliske and down to Ivankiv is not under the control of the invader.

Thank you for doing this every day. It means a lot to have reliable information.