Ukrainian forces liberated several villages in Kharkiv and Kherson region. Russian Army crossed the river near Izium and have broken through Ukrainian lines. 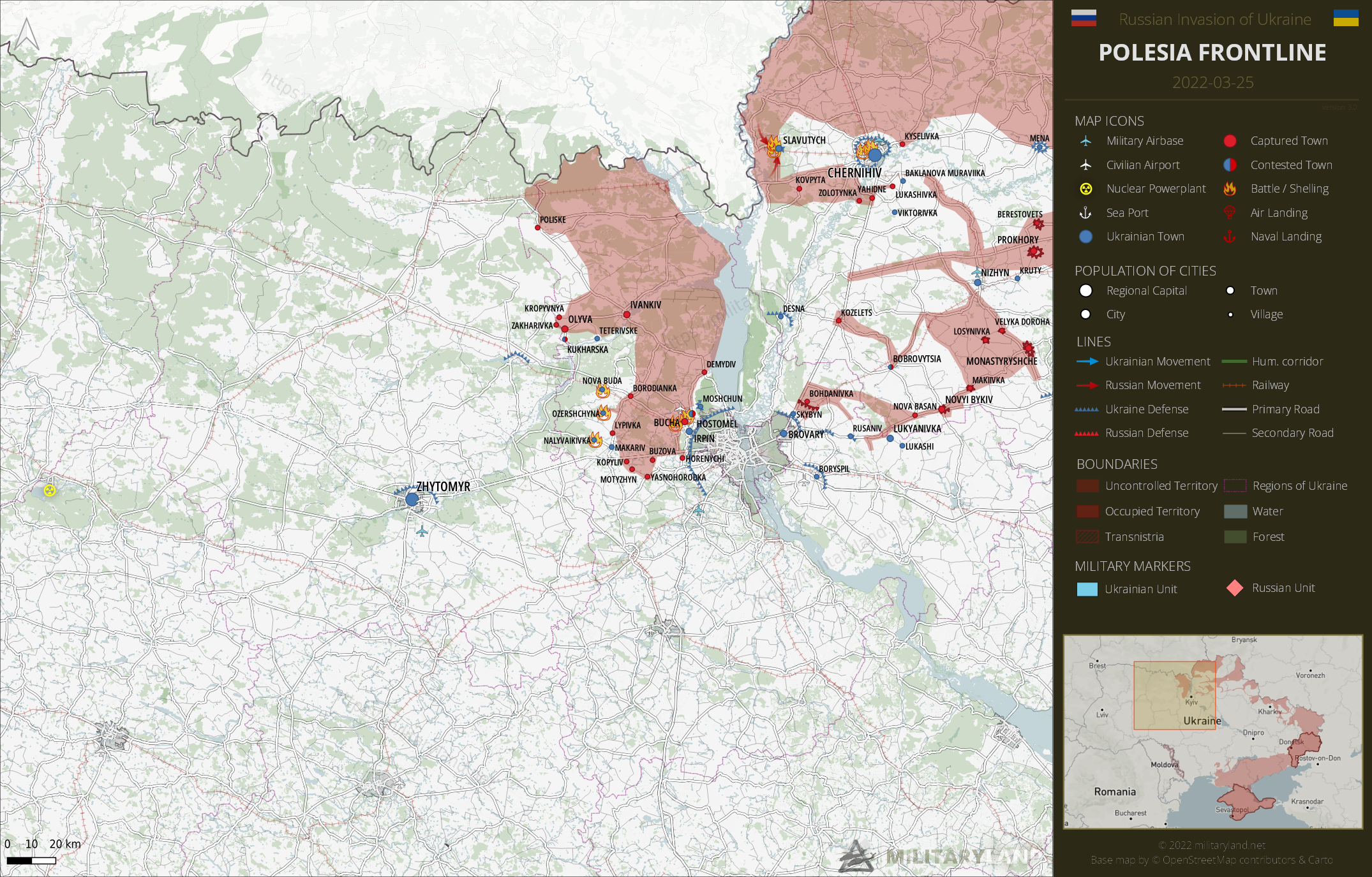 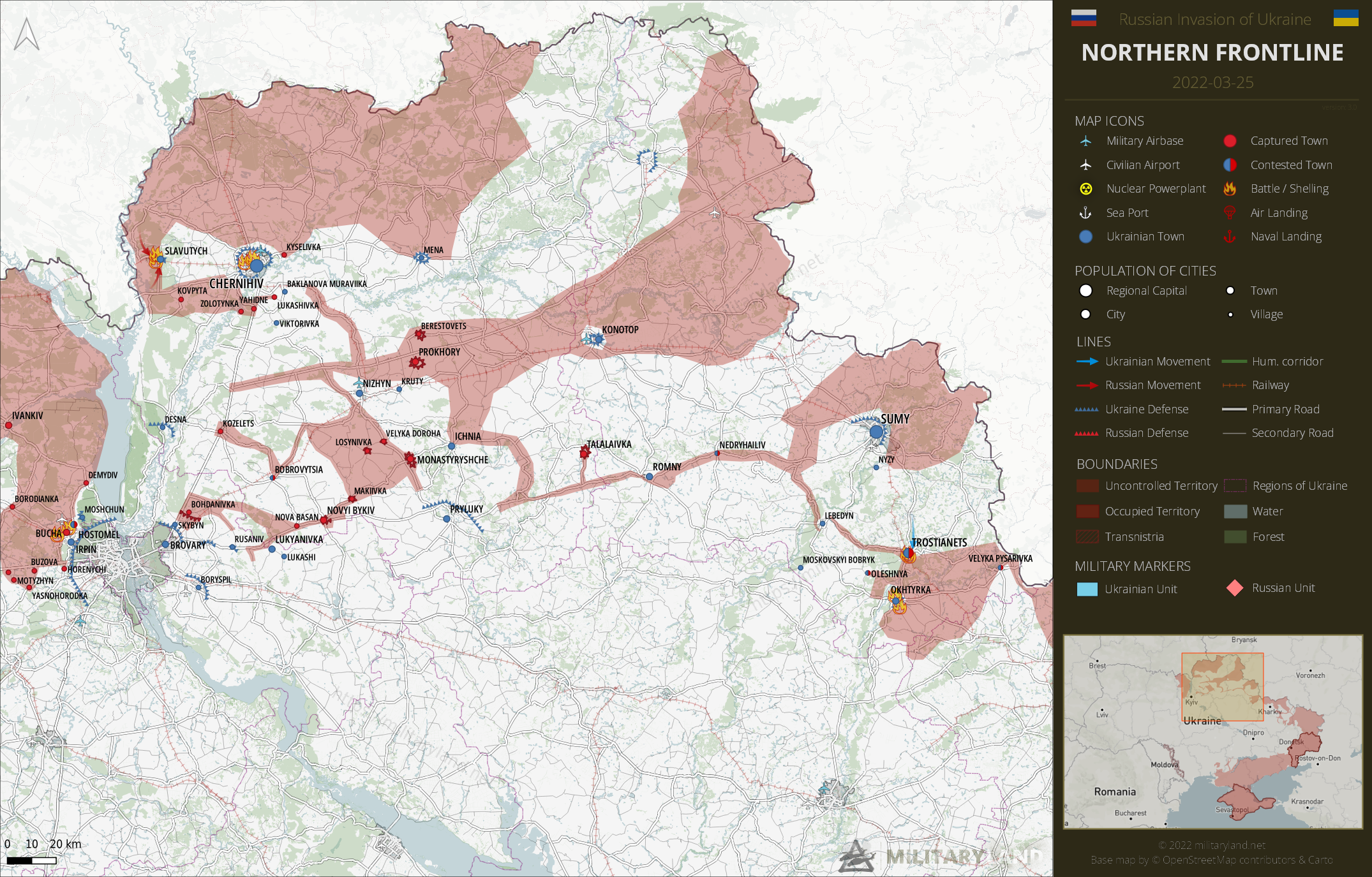 The regional capital of Chernihiv is de-facto besieged. The last free roads leading from/to the city are now in the fire range of Russian troops. The situation in Slavotych remains difficult. Russian snipers are active in the area, there are KIAs among Ukrainian defenders.

Russian troops have entrenched in the vicinity of Sumy, complicating the possible operation to lift the siege of the regional capital. Ukrainian troops have switched to offensive in Trostianets, they no longer just defend the northern part of the town. 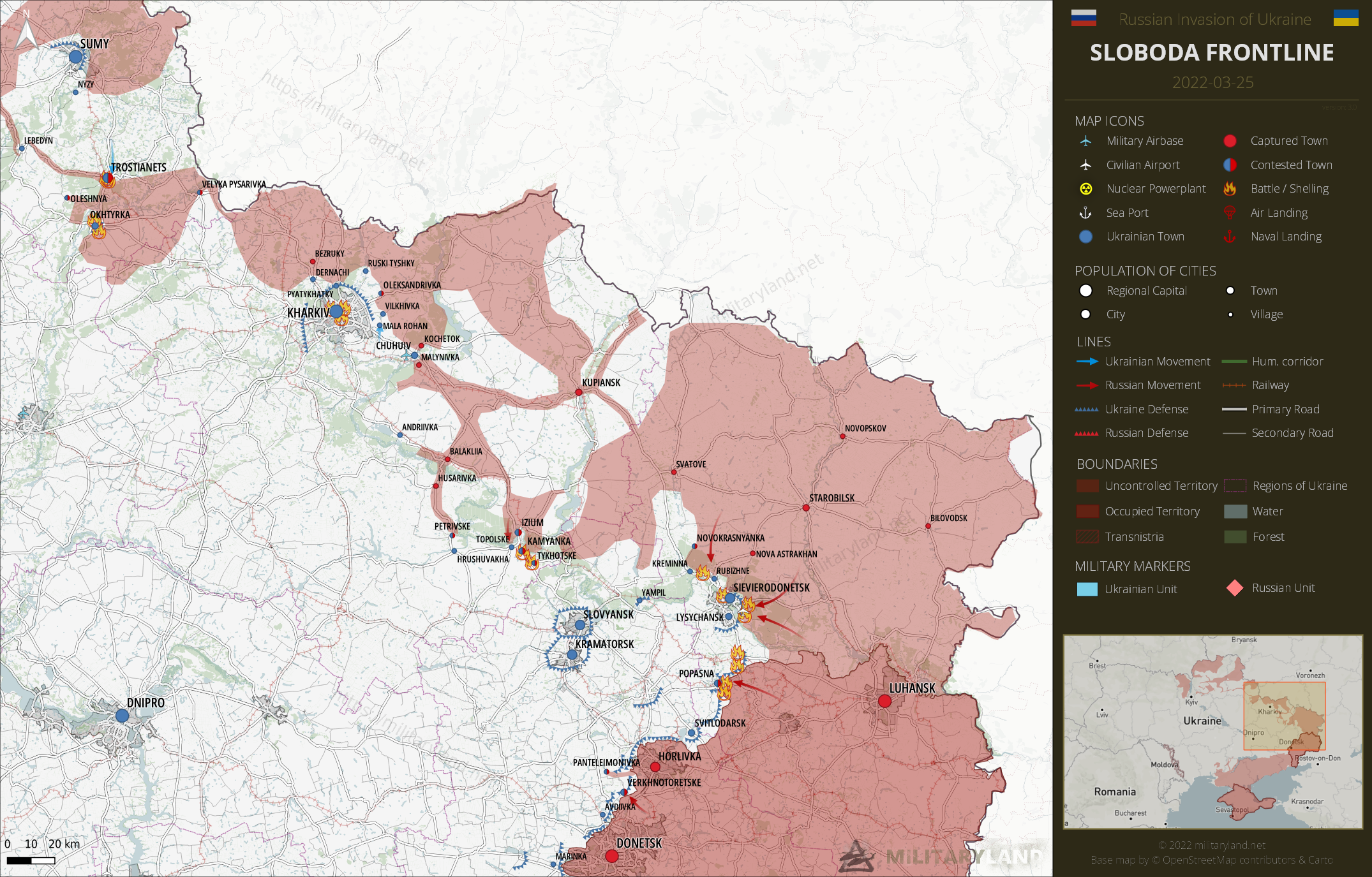 Ukrainian 92nd Mechanized Brigade attacked Russian positions at the eastern outskirts of Kharkiv. As the result of the attack, Ukrainian troops liberated Mala Rohan and Vilkhivka.

Russian forces crossed Seversky Donets south of Izium and have broken through Ukrainian lines. The enemy breakthrough was stopped at Kamyanka and Tykhotske. The status of Ukrainian troops in the southern part of Izium is unclear.

Russian forces continue to bomb Rubizhne, Sievierodonetsk, Lysychansk and Popasna, but they didn’t advance on the ground. 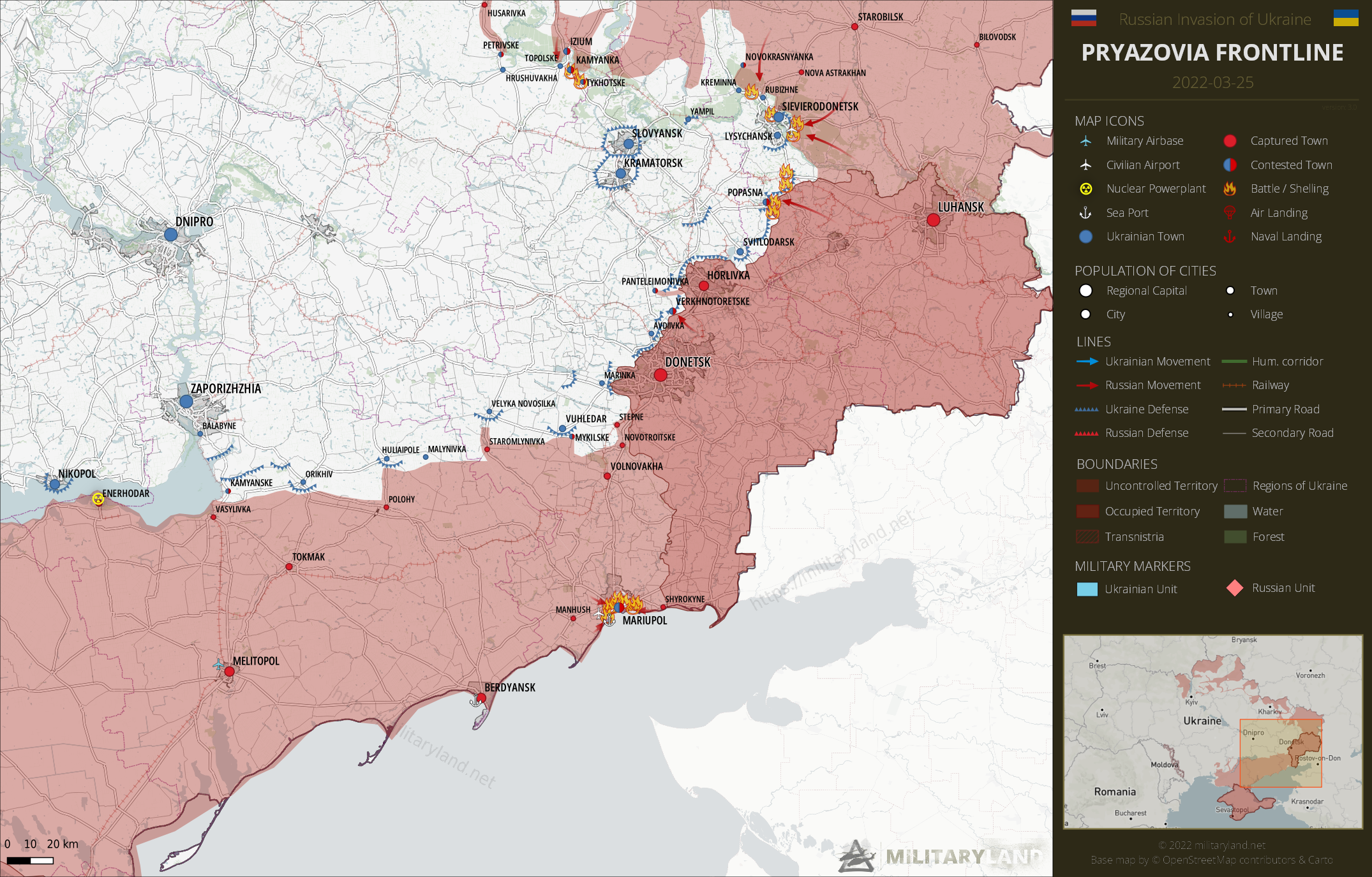 Russian forces claim they have captured the area between Verkhnotoretske and Panteleimonivka. I couldn’t verify the information at this moment, but it’s good to keep it in mind for the next summaries. 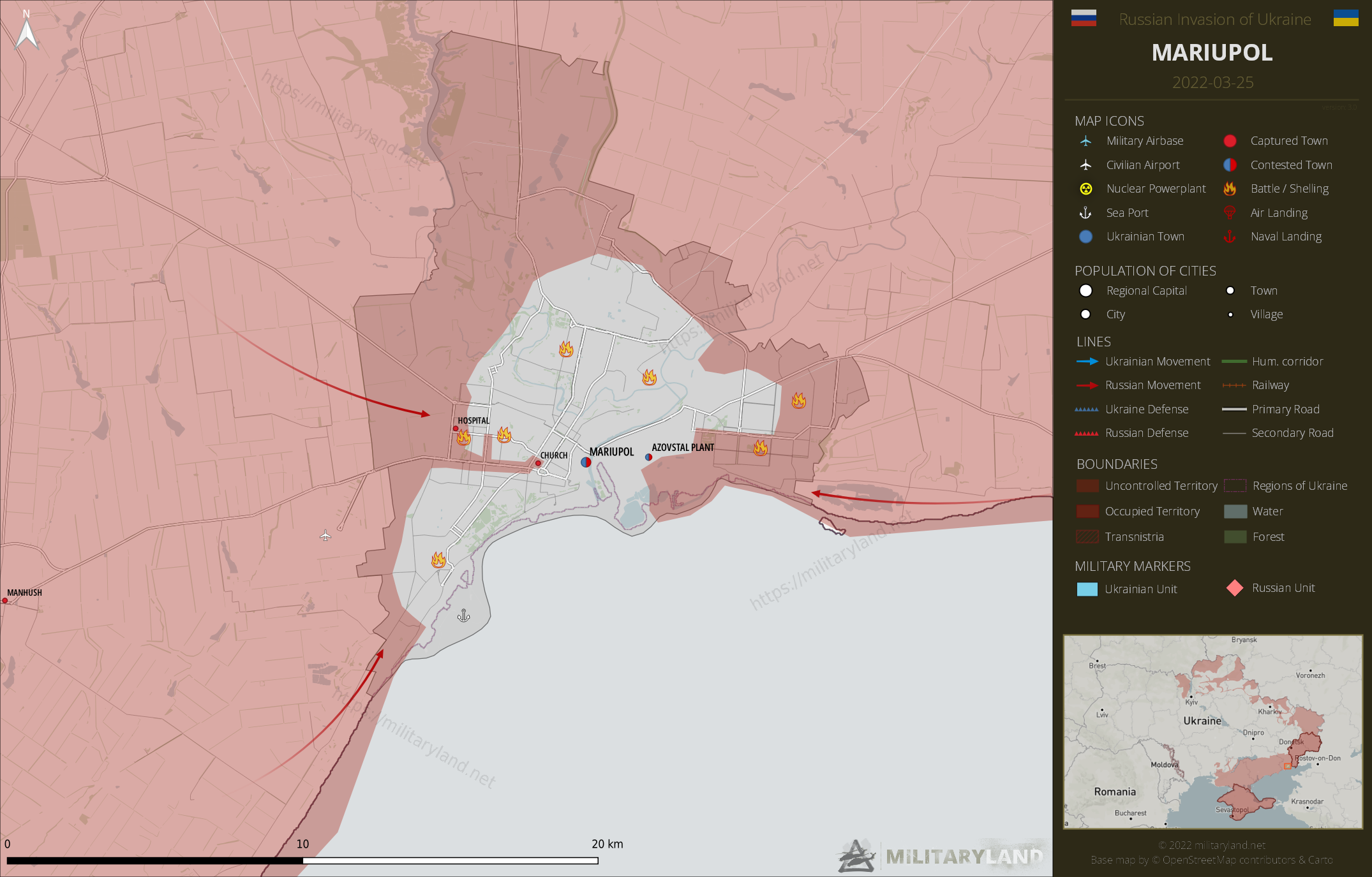 The area under Ukrainian control is slowly shrinking. French President Macron said that France, Greece and Turkey are working on a humanitarian operation to evacuate civilians from Mariupol. 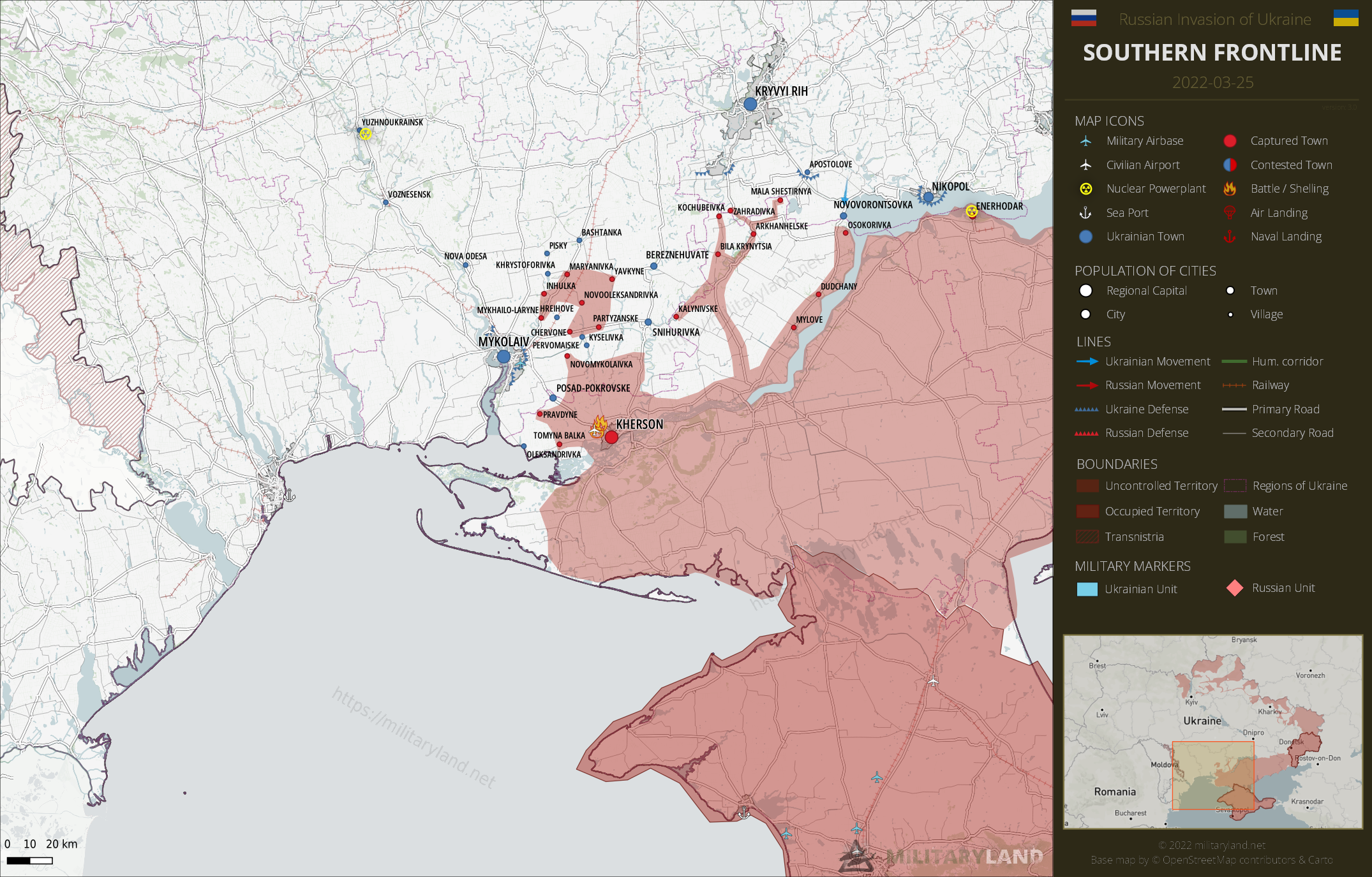 Russian troops left Snihurivka. I cannot verify the fate of the Russian element in the area of Inhulka, Yavkyne and Partyzanske, so I decided to keep the uncontrolled territory there. Let’s hope we all learn more tomorrow.

Ukrainian troops liberated Novovorontsovka on the edge of Kherson Oblast in the north. 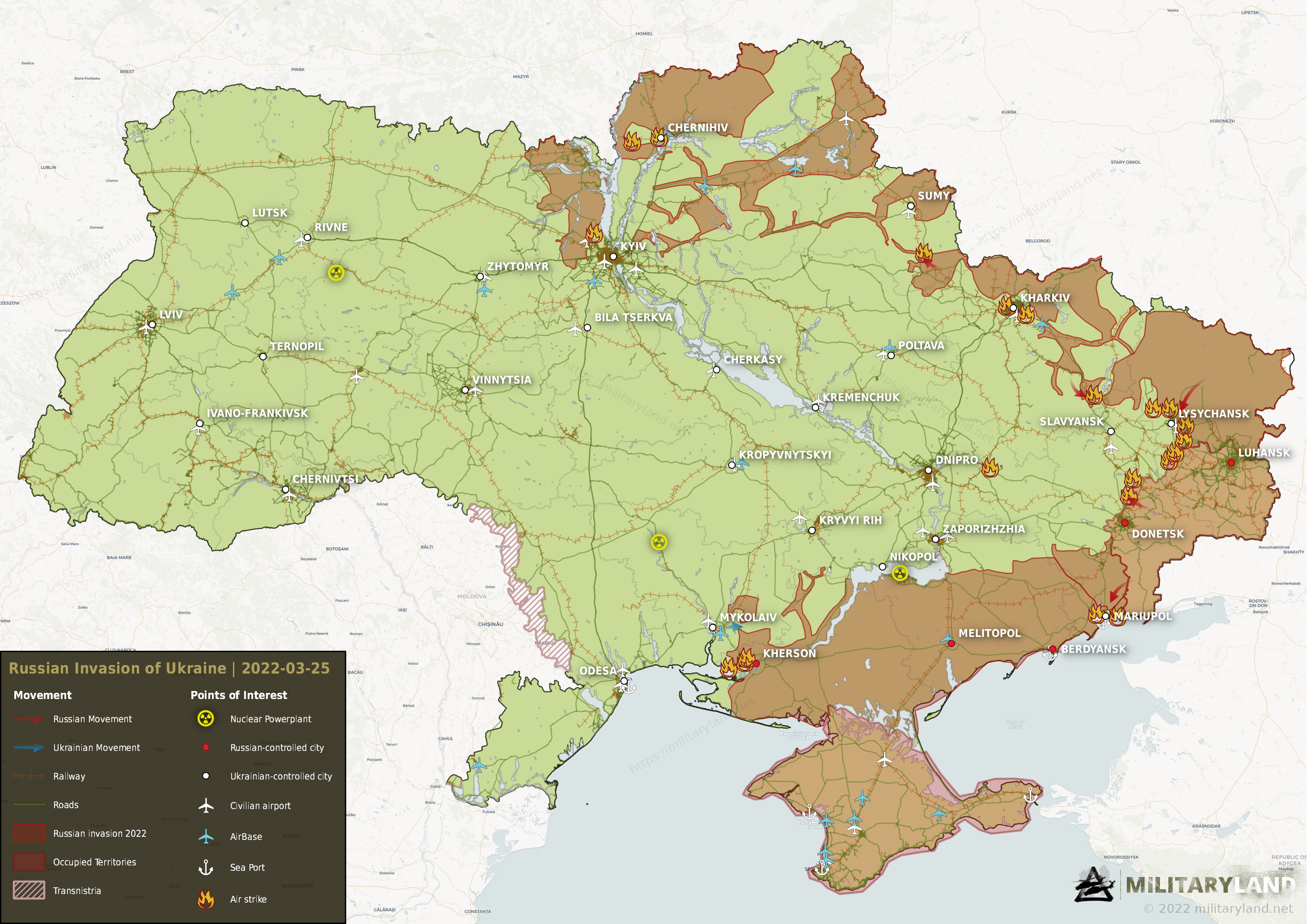 Don’t know if you know but there is Russian Chechen fighters in Mariupol ( i believe southwest of it?) right now or atleast there was on March 19th because of a video I saw of them fighting on twitter if you want to see it check my email on the comment

Stating “Russian forces unsuccessfully attempted to break thought Ukrainian lines in the vicinity of Brovary” is misleading. You are assuming that Russia want’s to break through Brovary in Kiev at this stage. This would be reckless and the invading force would perish from deep defensive Ukranian lines in Kiev. As I see It Russian forces are slowly encircling Kiev and once they completely control all the major roads going in and out of the city… Read more »

Ukrainian officials said there was an attempt by Russian forces to push towards Brovary, but UA repelled the attack.

I heard that the Azov might be deliberately sacrificed. Better have them as dead heroes than potential political force to recon with in the – undoubtedly turbulent – months to come.

All the ukr néo nazi are not in marioupol.

I think this war will reinforce this idelogy in ukrain.for them its a wonderful opportunity .

Thanks to poutin for that.

None of this seems particularly implausible, but what are your sources?

“As I see It Russian forces are slowly encircling Kiev and once they completely control all the major roads going in and out of the city from all sides they will move in. ”

Are you from 4 weeks ago?

I believe your maps are misplacing Panteleimonivka. It lies east of Verkhnotoretske, next to where the Altschewsk road branches off the Donzek-Horlivka road.

There is another one of the same name: https://goo.gl/maps/VPzfvhz31eJHLxr36
Ukrainian units didn’t control the one you mentioned prior the invasion.

No word of surrender 60 Ukranians from underground shelter near Kiev (nikolaevka) two Majors and some officers…..it is all over Russian Media but this site ignore it..zzzz Busness as usual..

No word on the killer birds developed by the Ukrainian bio-labs with a little help from the US, either! That’s all over Russian Media too!

We all have to accept that everyone is getting curated information. This site makes it no secret that the primary sources are the Ukrainian military with research done to try and verify it. Without access to satellite images and intel reports we’re all left with educated guess work.

Is it possible to assess the number of RU BTG:s per front section? Keep up the good work!