Another day of Russian invasion to Ukraine has passed by. Ukrainian resistance remains strong on all fronts, despite the air superiority of the enemy. Russian Army seems to prioritize Donbas area and focus its main forces there. 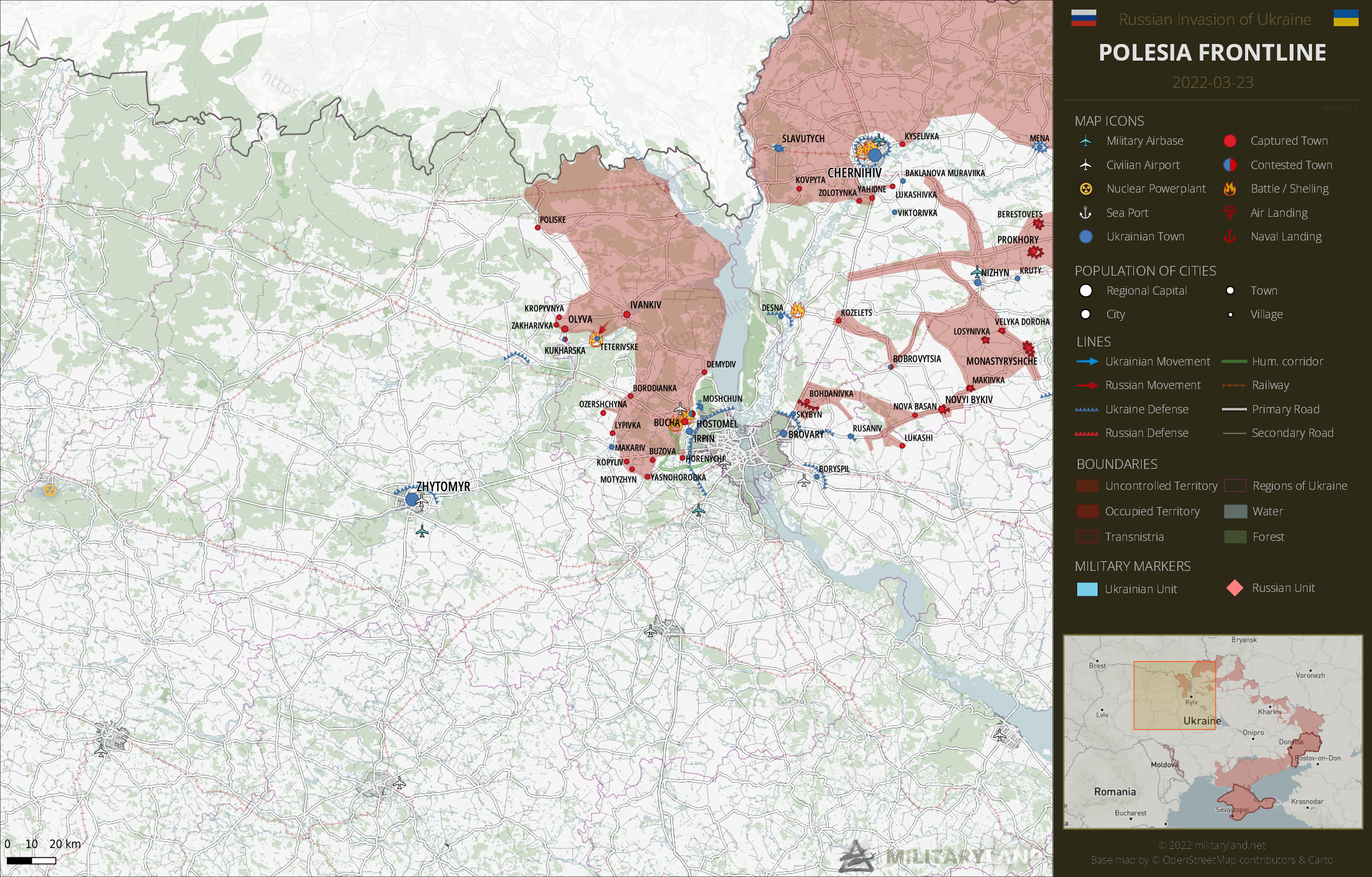 Russian troops assaulted Teterivske in the afternoon, but the defenders repelled the attack. The mayor of Bucha reported that Ukrainian forces encircled the remaining Russian troops in Bucha and Hostomel. We cannot verify such information and based on reports by Ukrainian Army officials, it’s not true.

The enemy launched an assault near Brovary. Ukrainian troops repulsed the attack without much trouble. 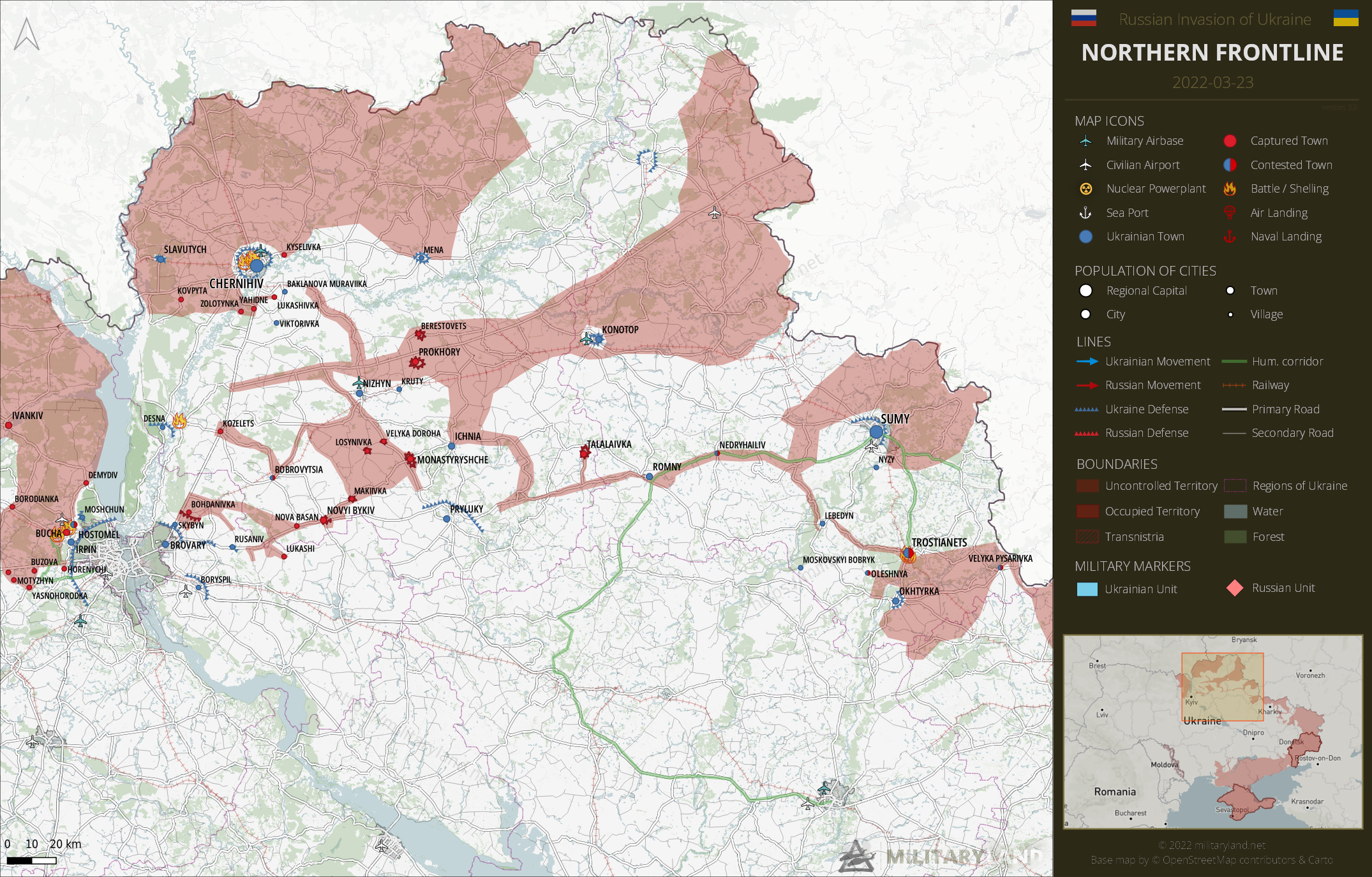 Russian Airforce destroyed a bridge near Desna, the only bridge in the area under Ukrainian control. The closest bridge now is all the way down near Vyzhorod (Ukraine controlled) or near Zolotynka (Russia controlled). Russian troops appear to be building a defensive positions and checkpoints near Novyi Bykiv, Makiivka, Losynivka, Monastyryshche, Velyka Doroha, Prokhory, Berestovets and Talalaivka.

It has become clear that the town of Slavutych near the border with Belarus is under Ukrainian control. Russian forces bypassed the town on February 24. Thanks CortoM for the heads-up!

Administration of Sumy Region clarified the situation in Trostyanets. The city is contested and reportedly the hottest point of Sumy Oblast at this moment. The local authorities reported heavy shelling and street fighting inside the city on Wednesday. 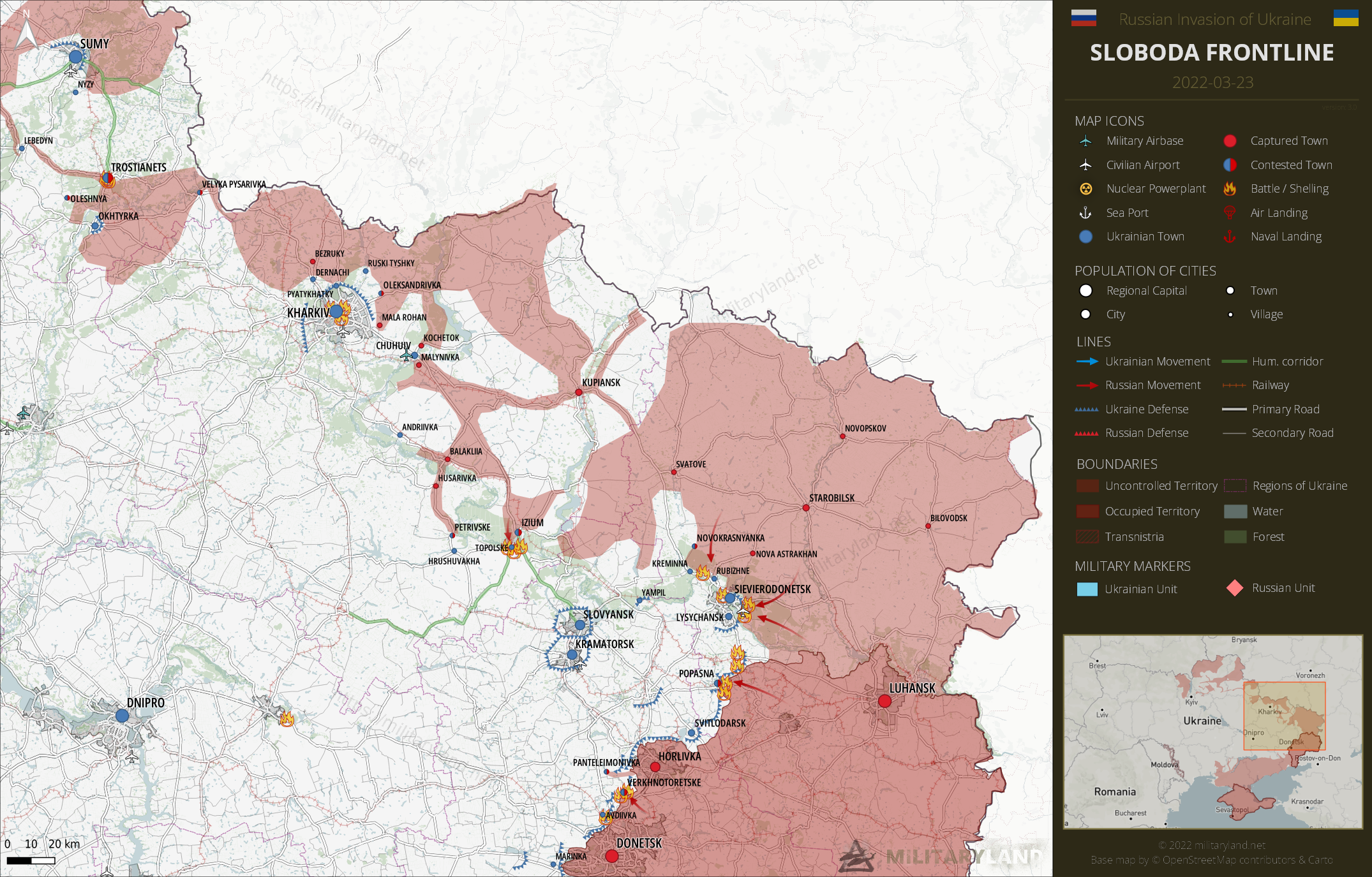 Russian forces crossed the Seversky Donets near Izium and attempted to gain control of Donetske, Topolske and Kamianka. They did not succeed and retreated to the original positions. According to the Ukrainian intelligence, Russian troops lost about 60% of its strength in the area of Izium.

Russian troops continued to hit Rubizhne, Sievierodonetsk, Popasna with artillery and rocket launchers. The situation on the ground didn’t change. 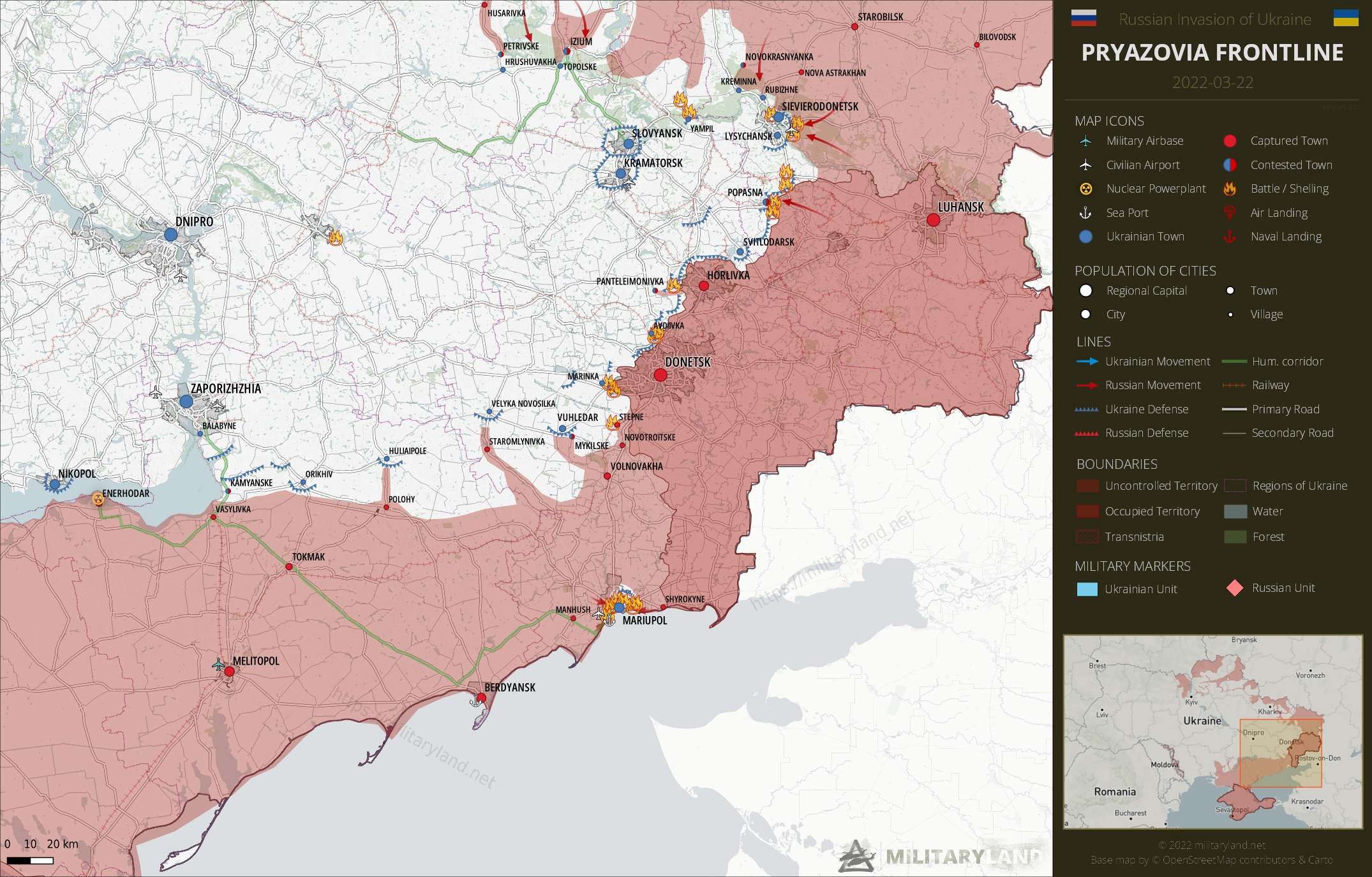 Russian forces advanced north of Donetsk and entered Verkhnotoretske. They reached a school located in the center, but haven’t captured the town fully. If we take into account the recent breakthrough of Russian forces near Panteleimonivka, Ukrainian command most likely decided to withdrew its forces from the area to avoid encirclement. However, this is not confirmed by Ukrainian forces. 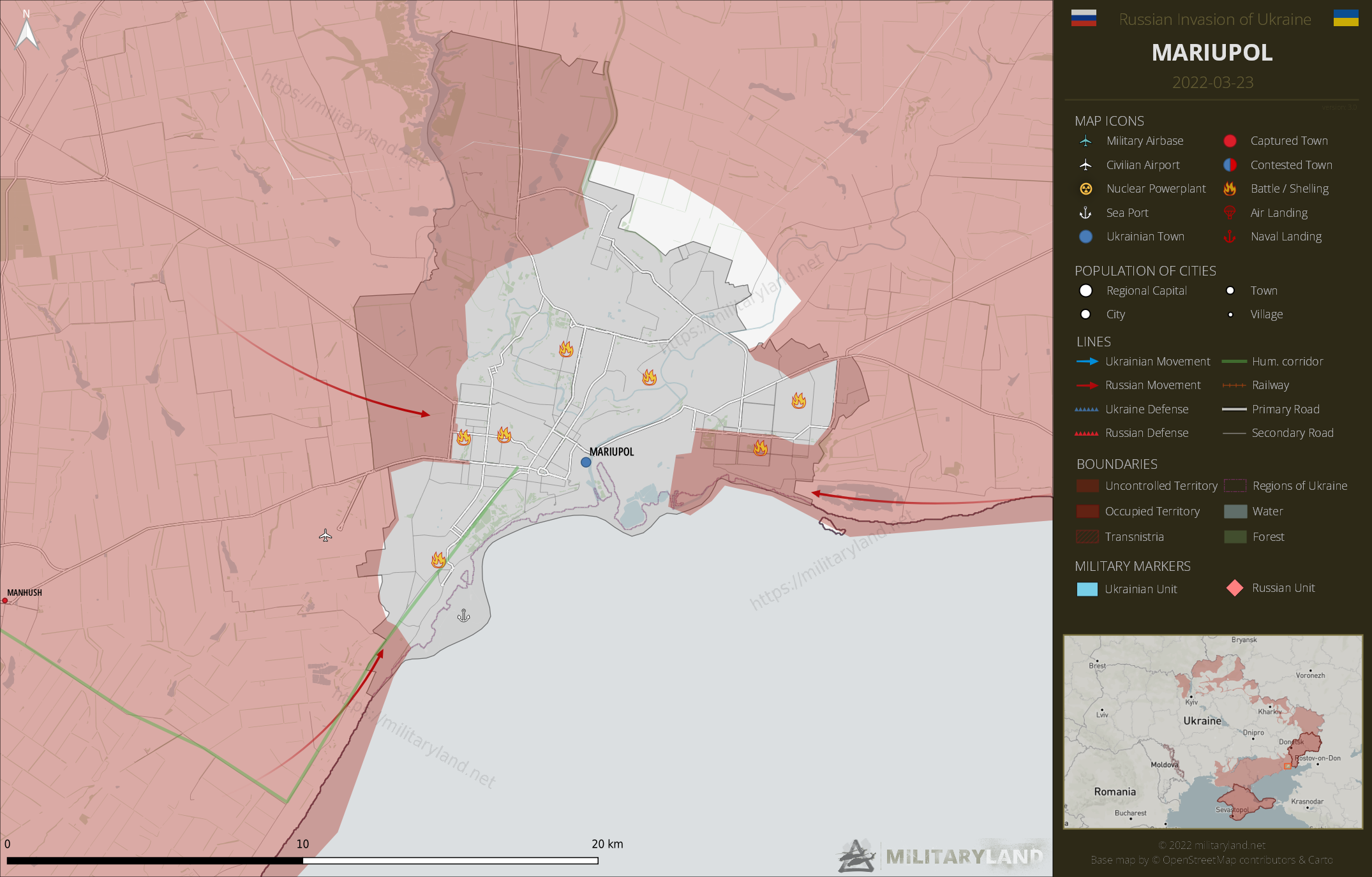 Mariupol is slowly becoming just a mark on the map. The destruction of the city is enormous. Ukrainian troops remains in control of the city center and part of Azovstal plant. 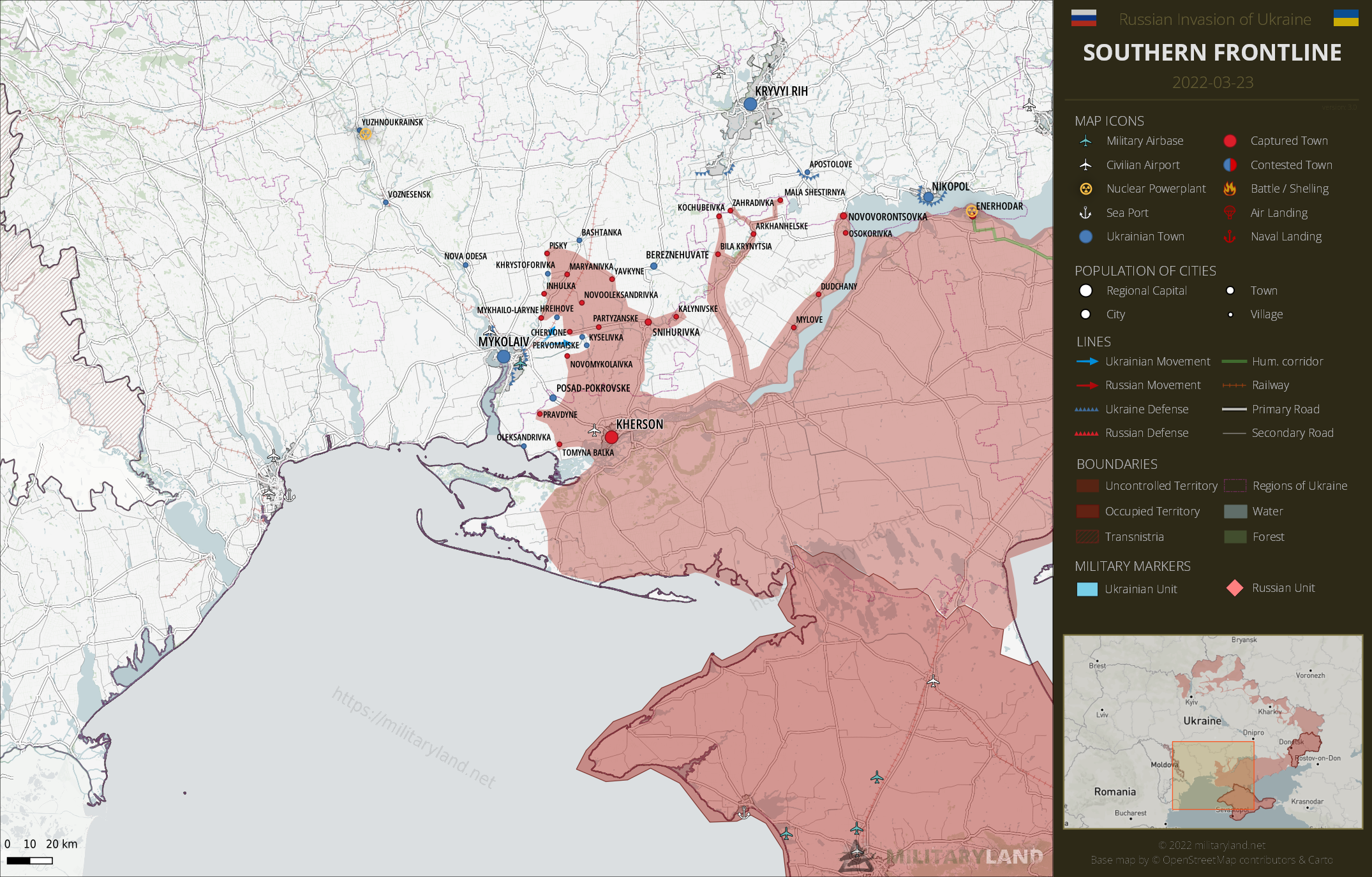 Ukrainian sources reported a counter-offensive in the north. The troops liberated Khrystoforivka, Hreihove, Kyselivka and Pervomaiske. It’s most likely the yesterday’s counter-attack of Ukrainian AirAssault Brigade. 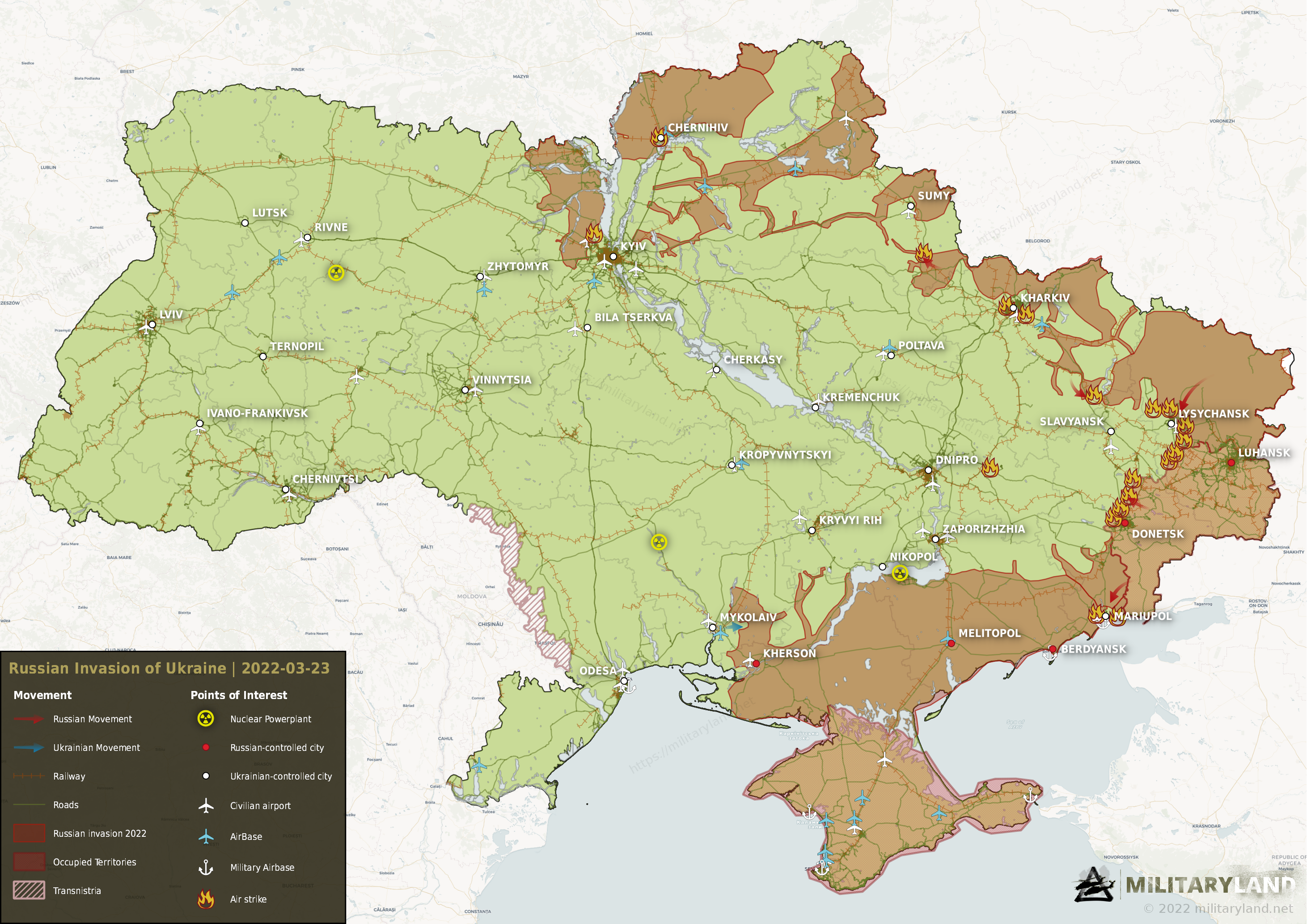 According to Northern Frontline map: Russian forces west of Kyiv are cut off from supplies (Bohdanivka, Novyi Bykiv, Monastyryshche). You would have to break out, but apparently dig in. But that won’t do them any good, they’ll have to give up, otherwise they’ll starve to death.

I thought east of Kiev, not west of Kiev. Sorry.

I think you have mixed up Irpin with Izium once more.

I think this is the way the UA is going to handle the results of counter attacks. They just mention captured towns (or towns they are still in possession of) in passing like they did today with Teterivske. I’d love to know more about the Mykolaiv counter attack but info is coming in piecemeal. We just have to add it to the puzzle. Richard Engel with CBS (US) posted a video in the Kyiv command… Read more »

Russia has an army of one million men and taking into account that in the Ukraine, 100,000 should have about 90% of its reserves left

“Russia has an army of one million men and taking into account that in the Ukraine, 100,000 should have about 90% of its reserves left” No, this is wrong. Russia deployed about 200,000 out of its 900,000 active and about 2 million total with reserves. Ukraine had about 200,000 active at the beginning with about 900,000 total with reserves. We need to remember that all of these are not ground troops. Ukraine had a small… Read more »

Plenty of dumb ammo left. They seem to be rationing the good stuff. There only tank factory is currently unable to produce anything due to a shortage of imported parts, which is likely impacting other weapons systems too. I’m sure the Chinese will probably sell them some of what they need but they cannot replace dead bodies for that equipment.

This is basic ammunition from the Soviet era, they probably have enormous amounts left. Getting it to flow into Ukraine at a sufficient rate and to the relevant battlefields is not necessarily easy, though.

Just a note. Not a first Russian war since Soviet era and we have no Idea in what condition the ammunition in general was stored.