Ukrainian forces conducted a counter-offensive in Mykolaiv Oblast and captured a number of settlements. In the north, Russian Army shelled Zhytomyr Region with missile artillery, for the first time since the invasion.

I apologize for the delayed Summary of the Day 26. The delay was caused by an issue on the side of our server provider. 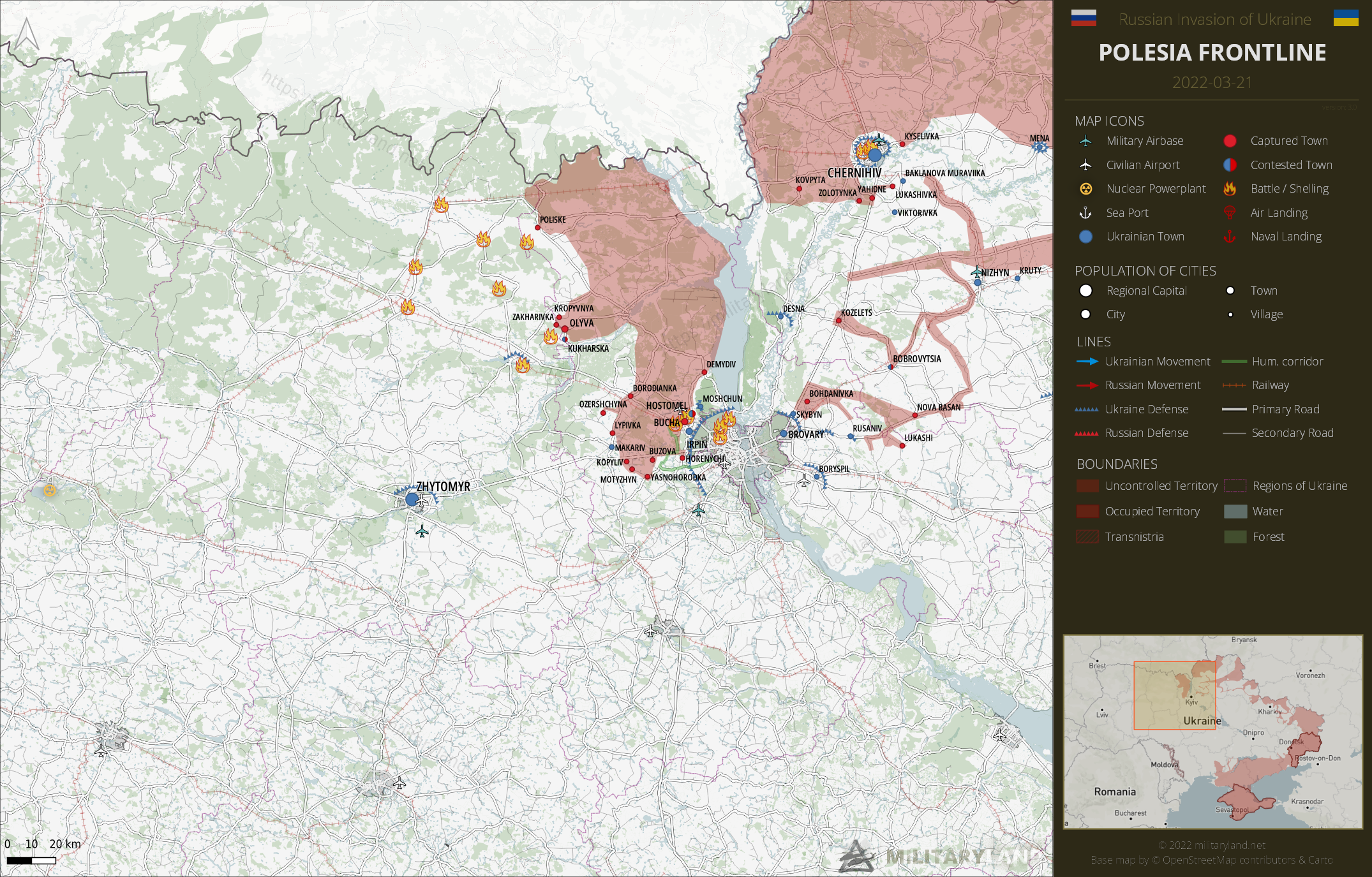 Ukrainian media and several social media accounts spread an information about the liberation of Makariv near Kyiv. I’d like to point you that Makariv has been liberated on March 3 and has been successfully defended since. Ukrainian Ministry of Defense indeed reported about liberation of Makariv on Monday, but in connection with Mykolaiv Oblast.

Russian Army shelled Zhytomyr Region with GRAD rocket launchers for the first time since the invasion. 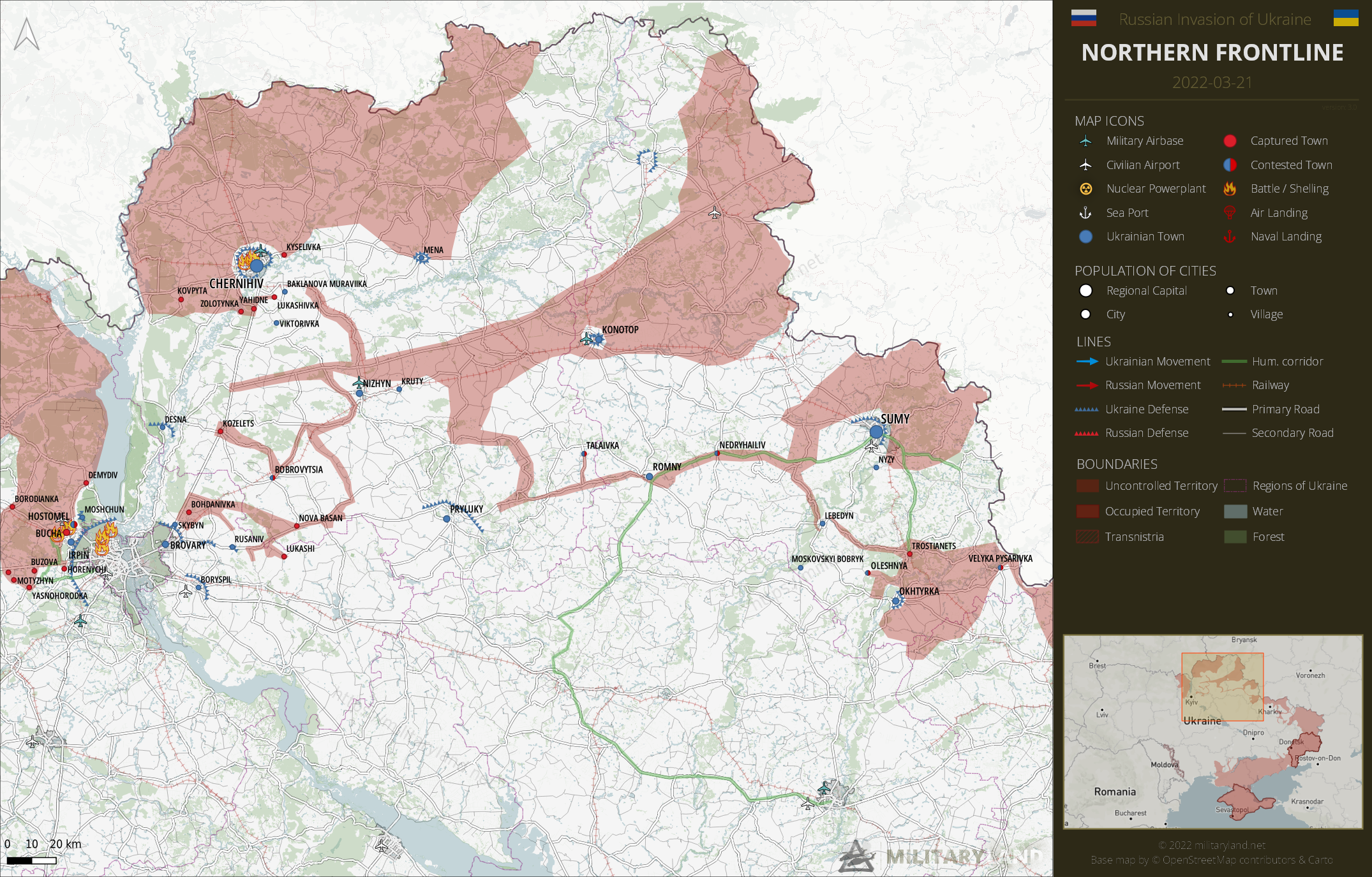 Ukrainian forces continue its guerilla tactics and ambushing logistical convoys in the rear. Russian Army has brought an engineering division to the oblast to reinforce defensive capabilities. 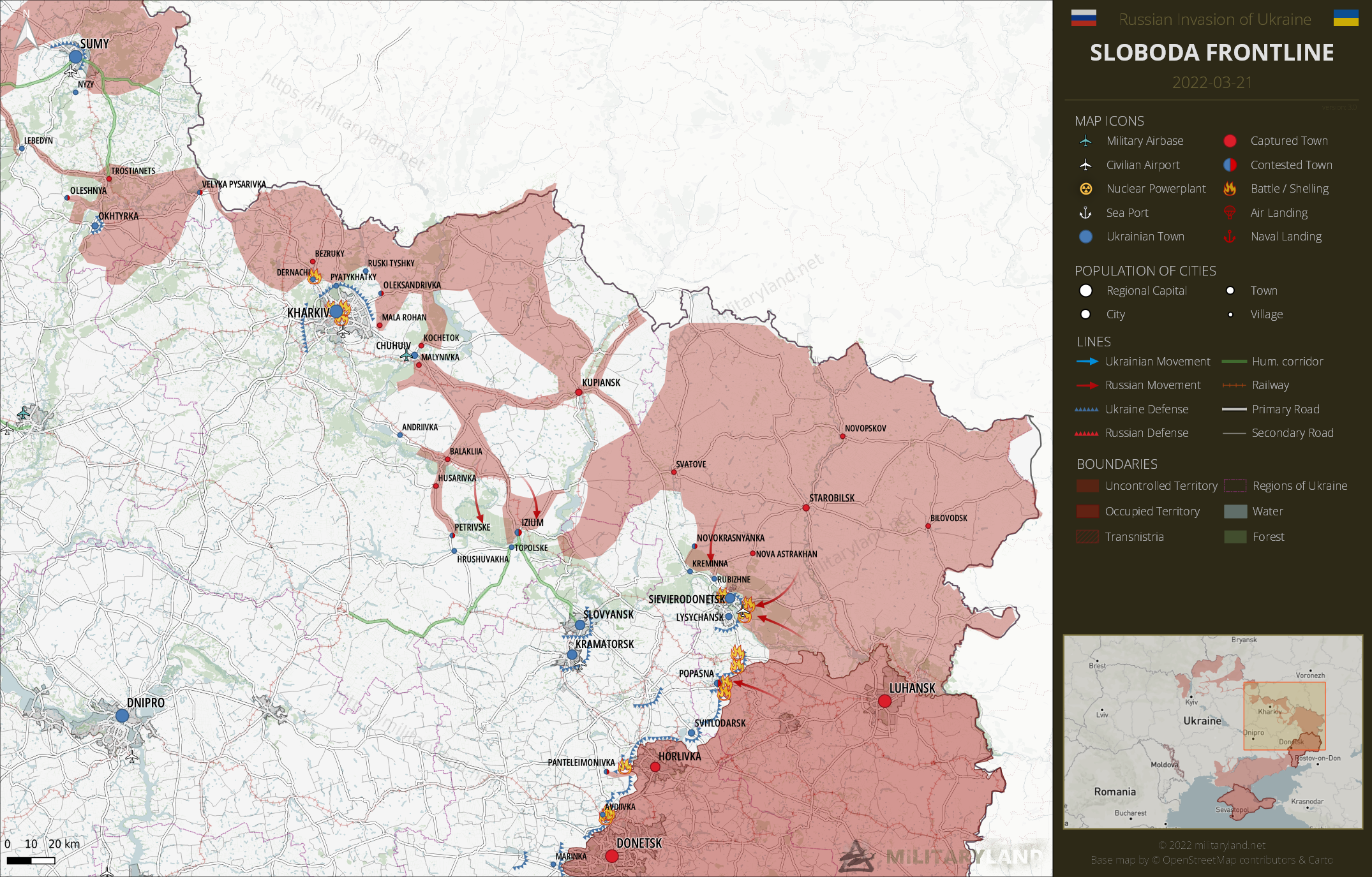 Situation in Kharkiv Oblast remains unchanged. The regional capital remains under artillery fire, but the enemy didn’t advance on the ground. There were no reports on Izium on Monday. Russian Army reportedly rebuilding a railway between Valuyki (Russia) and Kupiansk (Ukraine).

Russian troops continued to attack Kreminna, Rubzhne, Sievierodonetsk, Lysychansk and Popasna without any success. Any new gains during the day are reversed by Ukrainian forces in the evening. 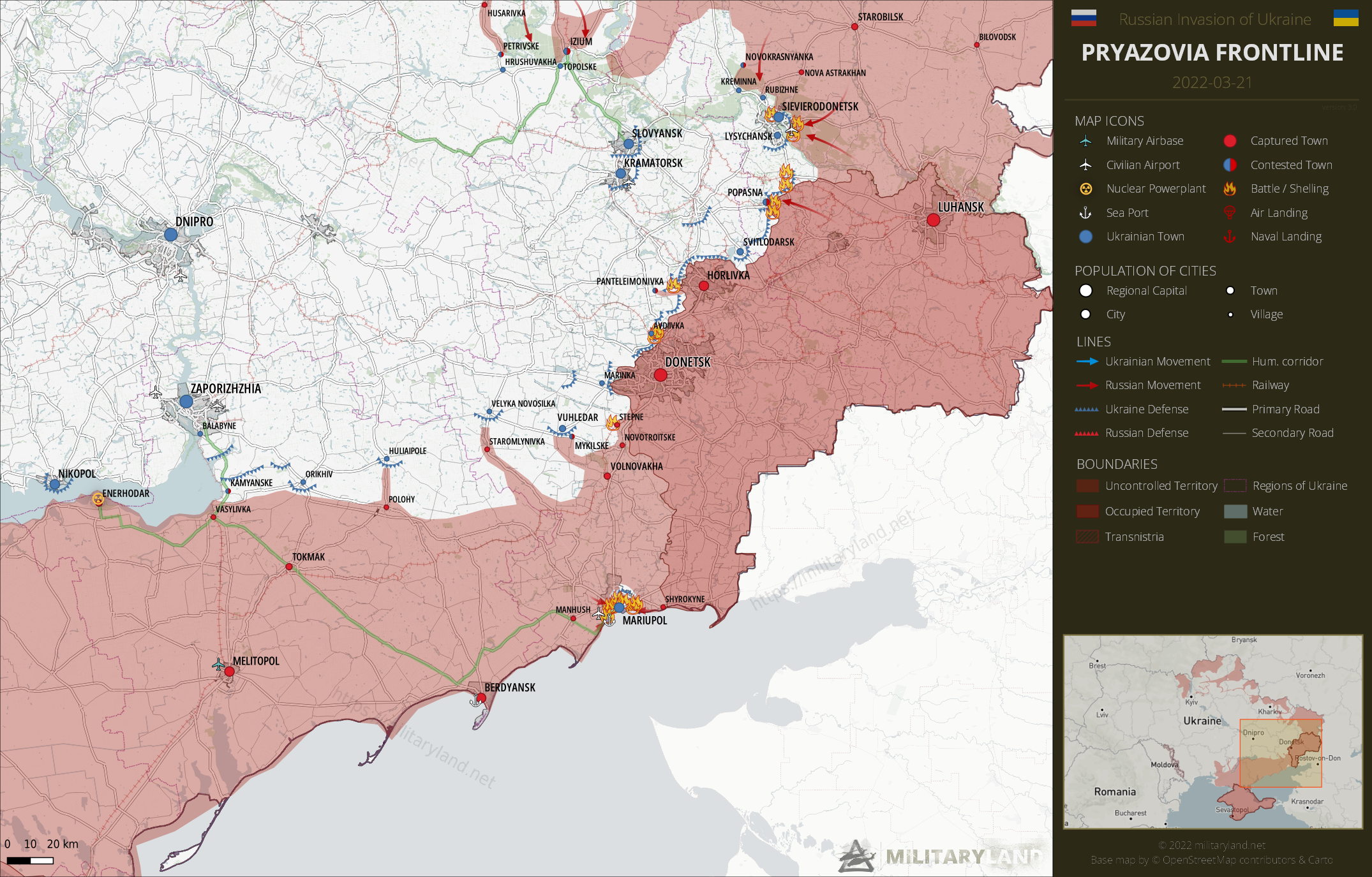 Russian forces attempted to break through Ukrainian lines near Avdiivka and Horlivka. The assault wasn’t successful.

Ukrainian forces destroyed at least one T-90 in Zaporizhzhia Oblast, most likely somewhere between Kamyanske and Orikhiv. Other than that, there is no report of any ground movement. 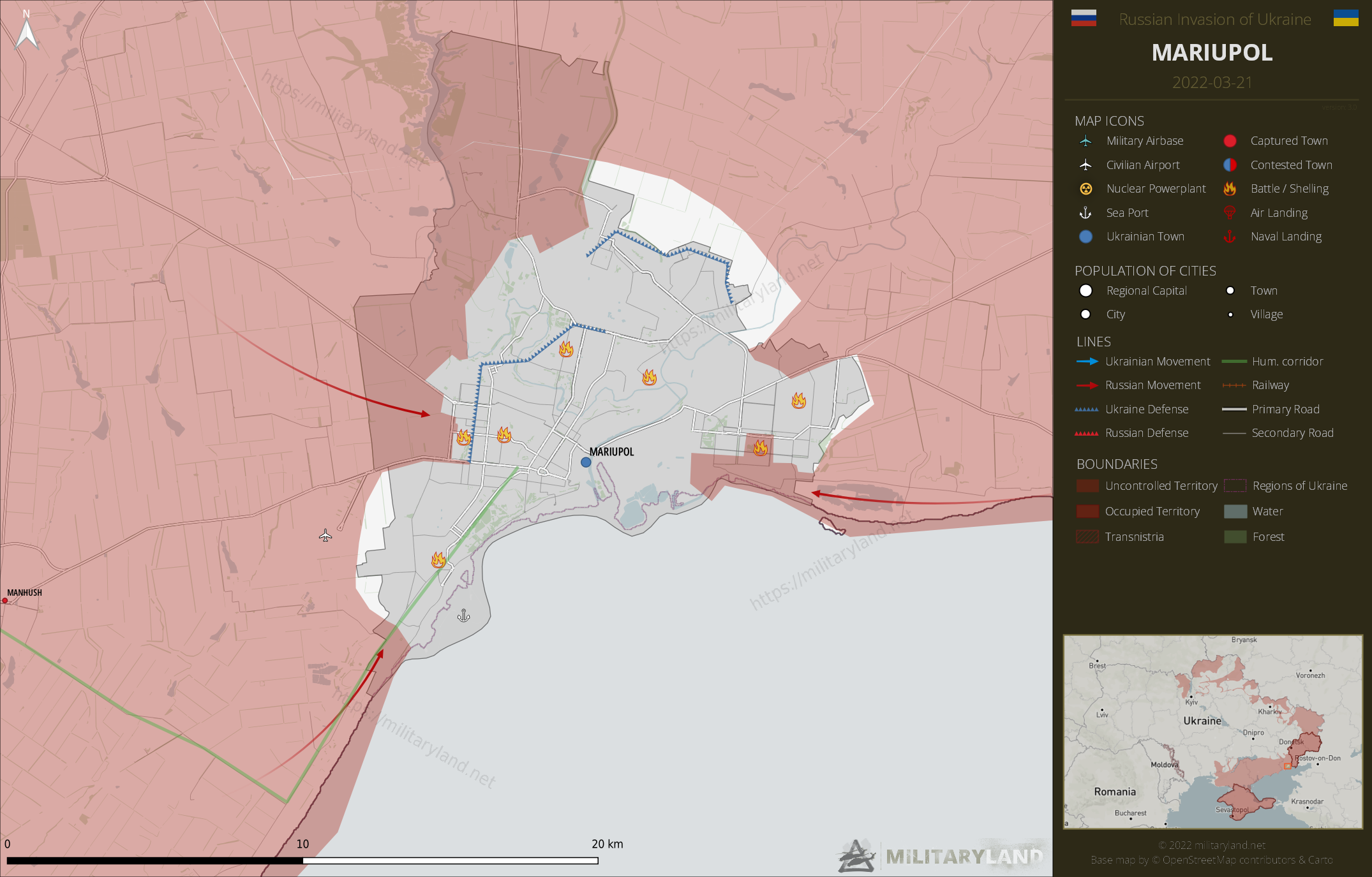 Russian forces entered Mariupol airfield without a fight. Ukrainian troops most likely withdrew a few days ago. The situation remains tense inside the city, heavy fighting was reported from Azovstal industrial complex. Azov Regiment reported a destruction of Russian patrol boat near Mariupol, but we cannot verify it. 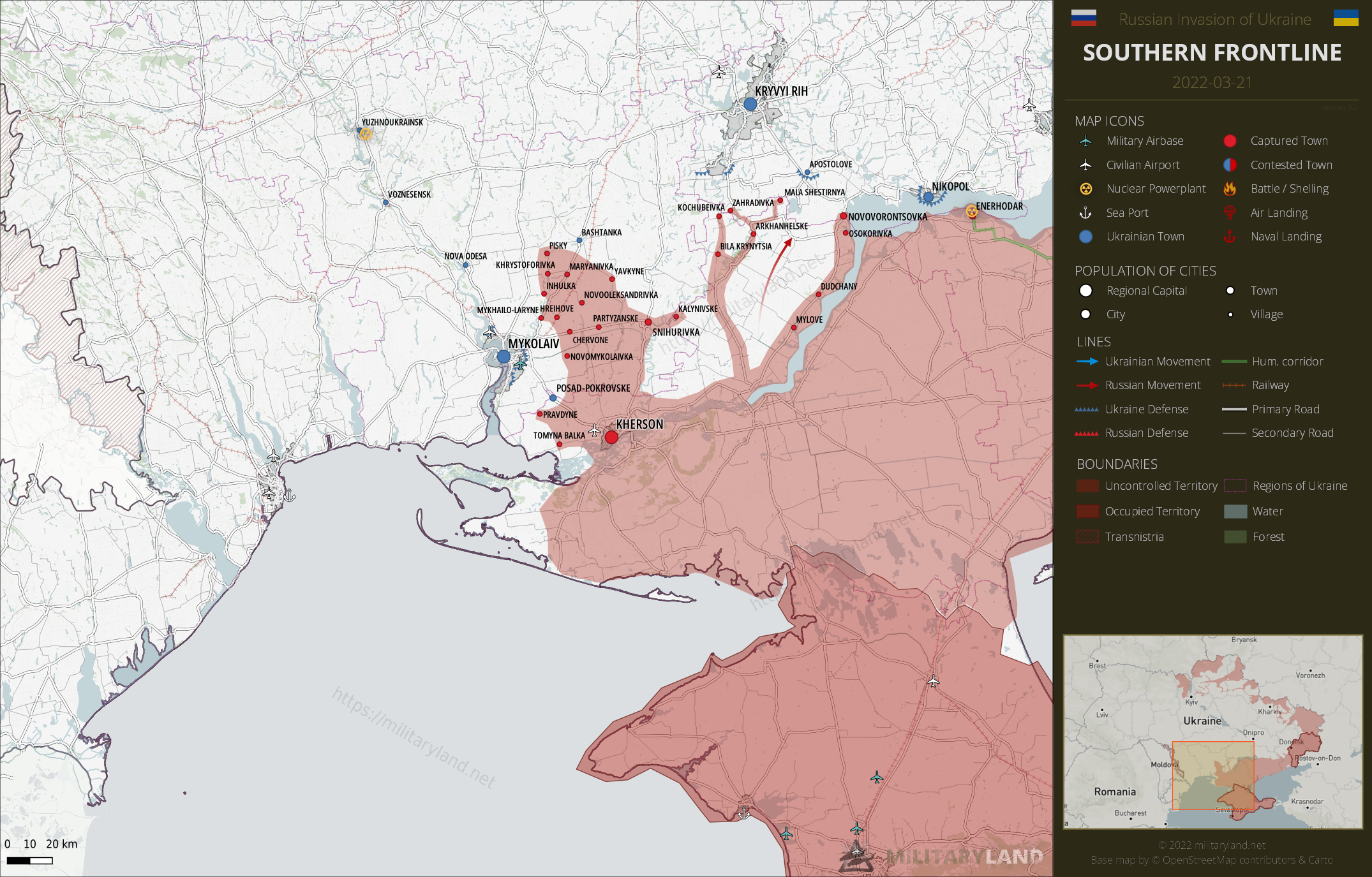 Ukrainian 80th AirAssault Brigade liberated a number of settlements in Mykolaiv Oblast, most likely in the north near Pisky and Inhulka. We’re waiting for more details.

Ukrainian forces are reportedly pushing towards Kherson, but there is no visual proof. Russian National Guard stationed in Kherson opened fire on civilians attending a pro-Ukrainian rally, at least one person was wounded. 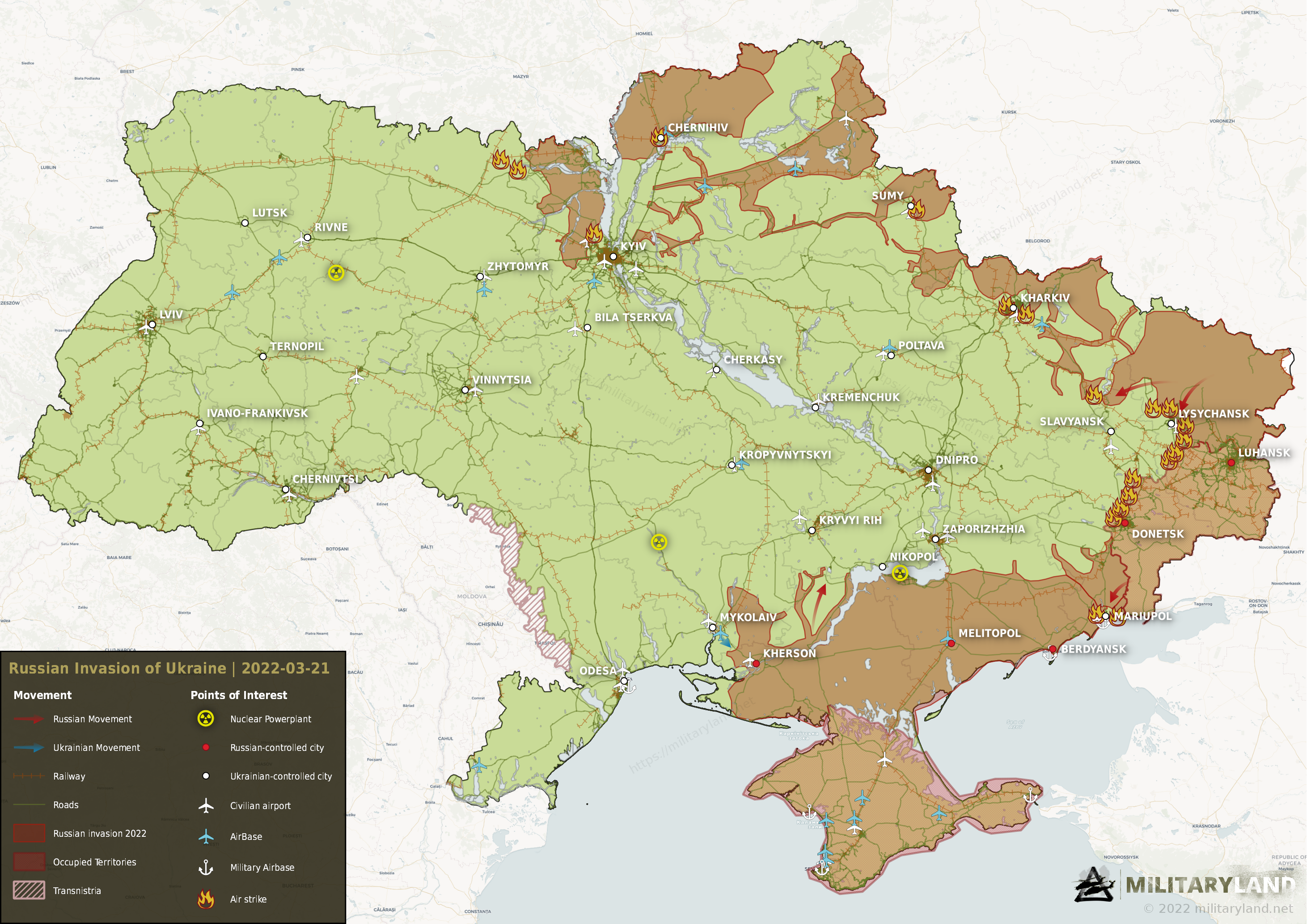 “Russian Army reportedly rebuilding a railway between Valuyki (Russia) and Kupiansk (Ukraine).” That would actually be a bit more than just “a railway line”. It is one of the few dual track electrified lines usable for Russian army logistics, and therefore has been declared as target (for re-conquest and/or partisan attacks) by the Ukrainians. Another of these lines runs from Donezk to Mariupol via Volnovakha, explaining the strategic significance of the latter’s conquest by the… Read more »

As concerns the Ukrainian “railway war”: The Ukrainian Advisor to the OP, Alexei Arestovich, yesterday posted a photo of a dismantled railroad track that he claimed was taken somewhere in Cherson district. There are only a few railway lines in the district, the most important of which runs from Crimea to Cherson City. That line has been included in the Ukrainian target list.

Can you please add another colour – blue tint – for land that was occupied by Russia but has now been recaptured/liberated.. Thanks

No worries on the delay sir! By the sound of things, you are going to be a busy man in the next few days 🙂 I appreciate your hard work and love your maps!

Thanks for understanding, I appreciate it.

– Russia and Ukraine supply 30% of the world’s wheat. Russia will likely proceed to cause a mass famine in African nations that do not ally with Russia and China. This may cause a migration wave so huge, that the EU starts to crumble. – The West has declared an economic war on Russia. Do not be surprised if Russia turns off the wheat and gas taps into Europe. Do not be surprised if the… Read more »

Yes, but what effect will turning off the wheat, etc. taps have on Russia? They already have much less export income now due to sanctions and this will only exacerbate an already dire economic situation. BEFORE the war, it’s GDP was already smaller than the American state of Texas (and with a GDP per capita 1/6 of Texas) to support a population five times the size and the infrastructure for a landmass 25 times the… Read more »

Starving people starve, they cannot escape. Hunger does not lead to waves of refugees.
Food shortages lead to food struggles, civil wars and collapsing states, etc.
Due to the then brutal fighting (barbarism) there could be waves of refugees, at the earliest in autumn of this year. Before that, Russia collapsed economically in June unless a miracle happens. But miracles do not exist and cannot happen.