The map didn’t change much on Sunday. Russian forces continued to push towards Kryvyi Rih, but failed to advance in Luhansk Region. Ukrainian forces successfully ambushed several convoys behind the enemy lines in Sumy and Chernihiv Region.

According to Ukrainian intelligence, Belarus has decided to enter the war on the side of aggressor. We’ll see in upcoming days if it’s true or not. 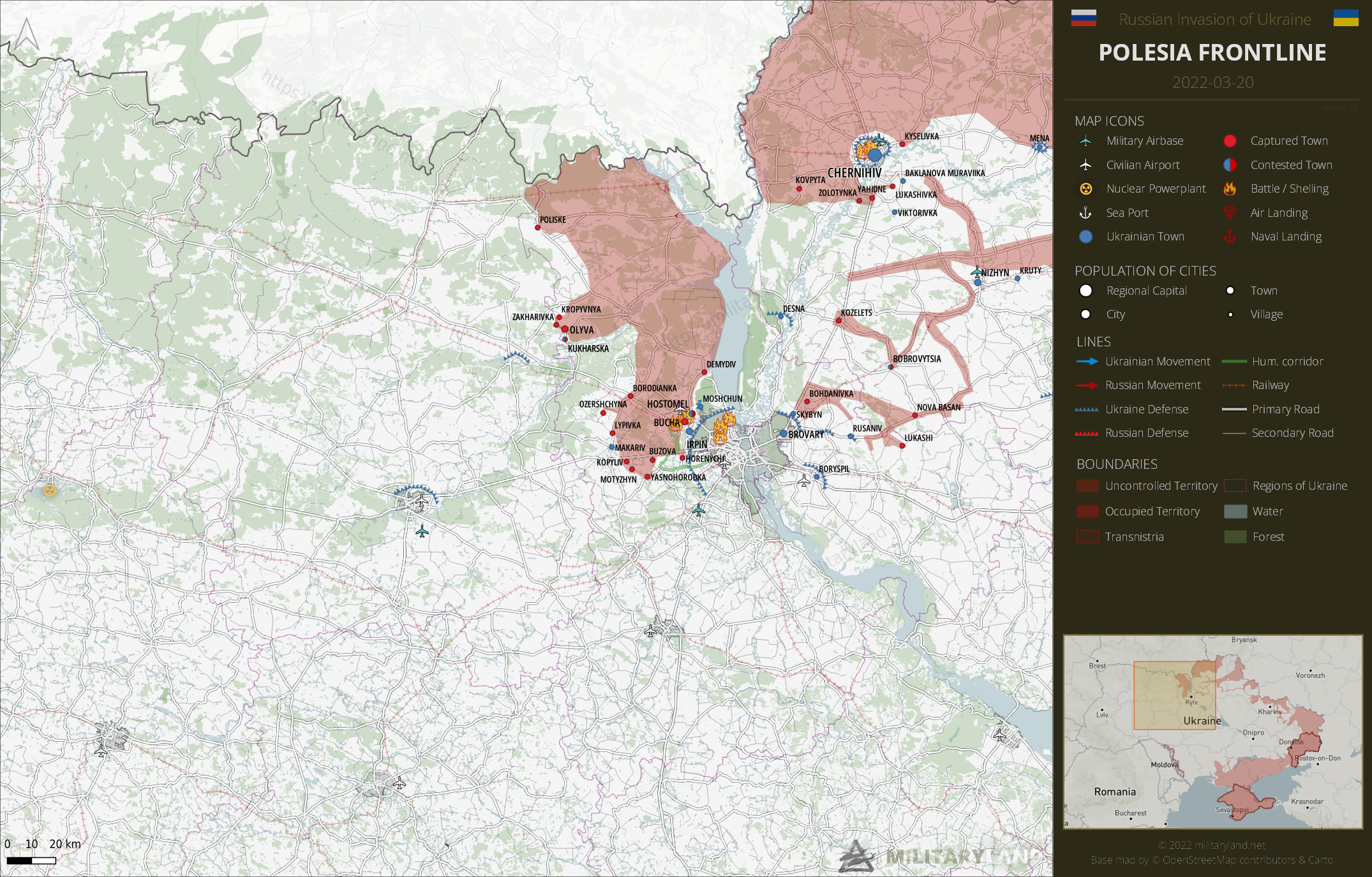 The Russian Army attempted to break through Ukrainian lines towards Kyiv, but the attackers suffered heavy loses and withdrew. According to the Ukrainian officials, a combined detachment of Russian 6th Tank Regiment was eliminated.

A Russian cruise missile hit a mall area in Podilskyi District of Kyiv a few minutes before the midnight. Rescue operations are underway. 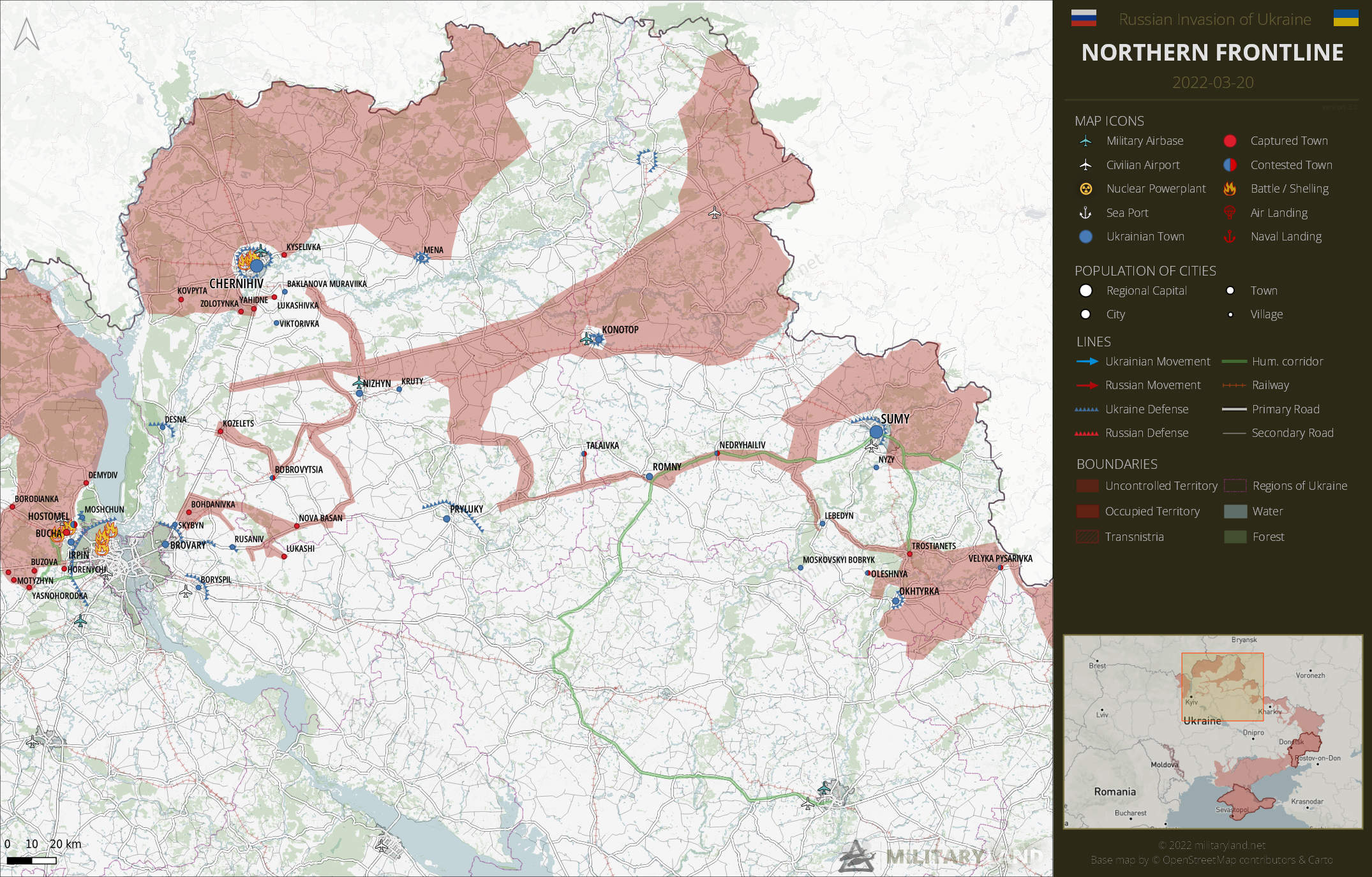 Ukrainian troops hit a number of Russian convoys in the rear, and reportedly have cut off supply routes to Russian units in Brovary.

Ukrainian forces managed to ambush a few convoys through the day, causing more troubles for the invaders in the area. 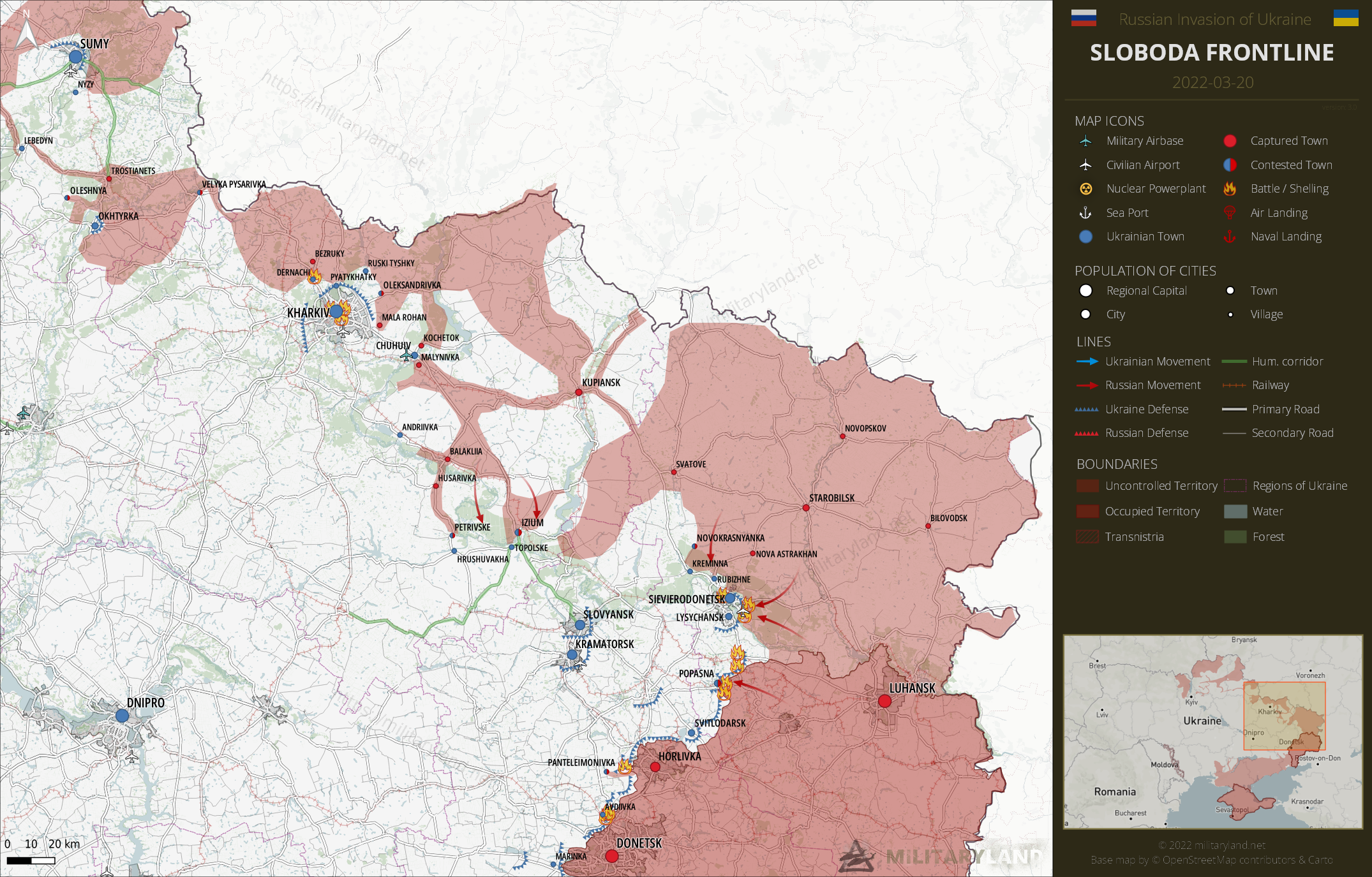 Russian troops reached Dernachi again, but failed to take it. The enemy was again unsuccessful to capture the southern part of Izium. Instead, Ukrainian forces hit another Russian convoy nearby and eliminated a number of Russian hardware.

Ukrainian intelligence believes Russian troops might cease the operation near Izium and will attempt to cross the Seversky Donets river somewhere else.

Russian forces continue to focus on Sievierodonetsk and Rubizhne. All attempts to bypass the cities or advance into the outskirts have failed so far. The battle of Popasna has continued on Sunday as well. 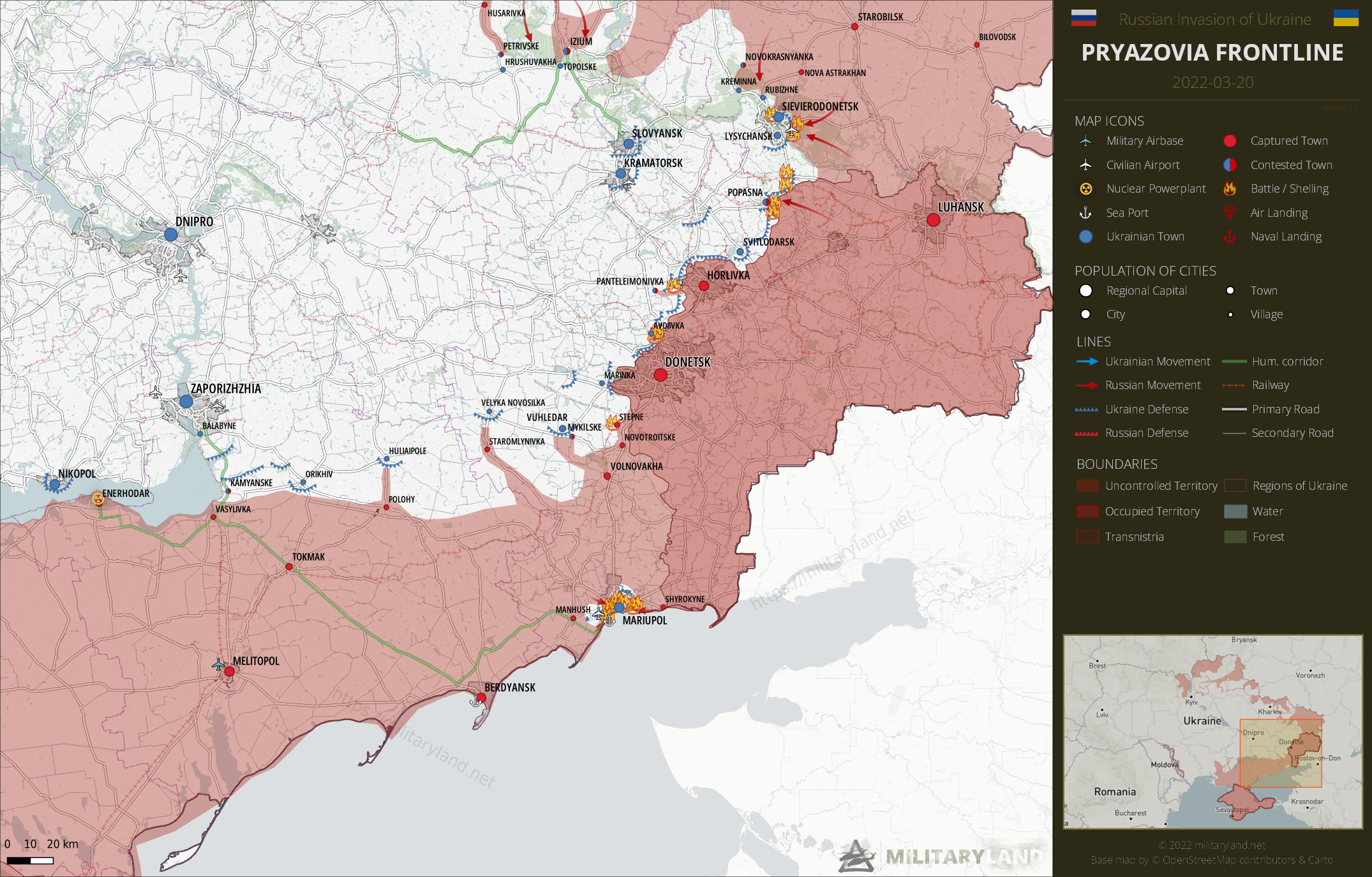 Russian forces consolidated gains around Volnovkha and captured Stepne near Novotroitske. In the north, the enemy attempted to break through the lines north of Avdiivka, but Ukrainian troops repulsed the attack.

Russian forces did not conduct any offensive operation in the area. 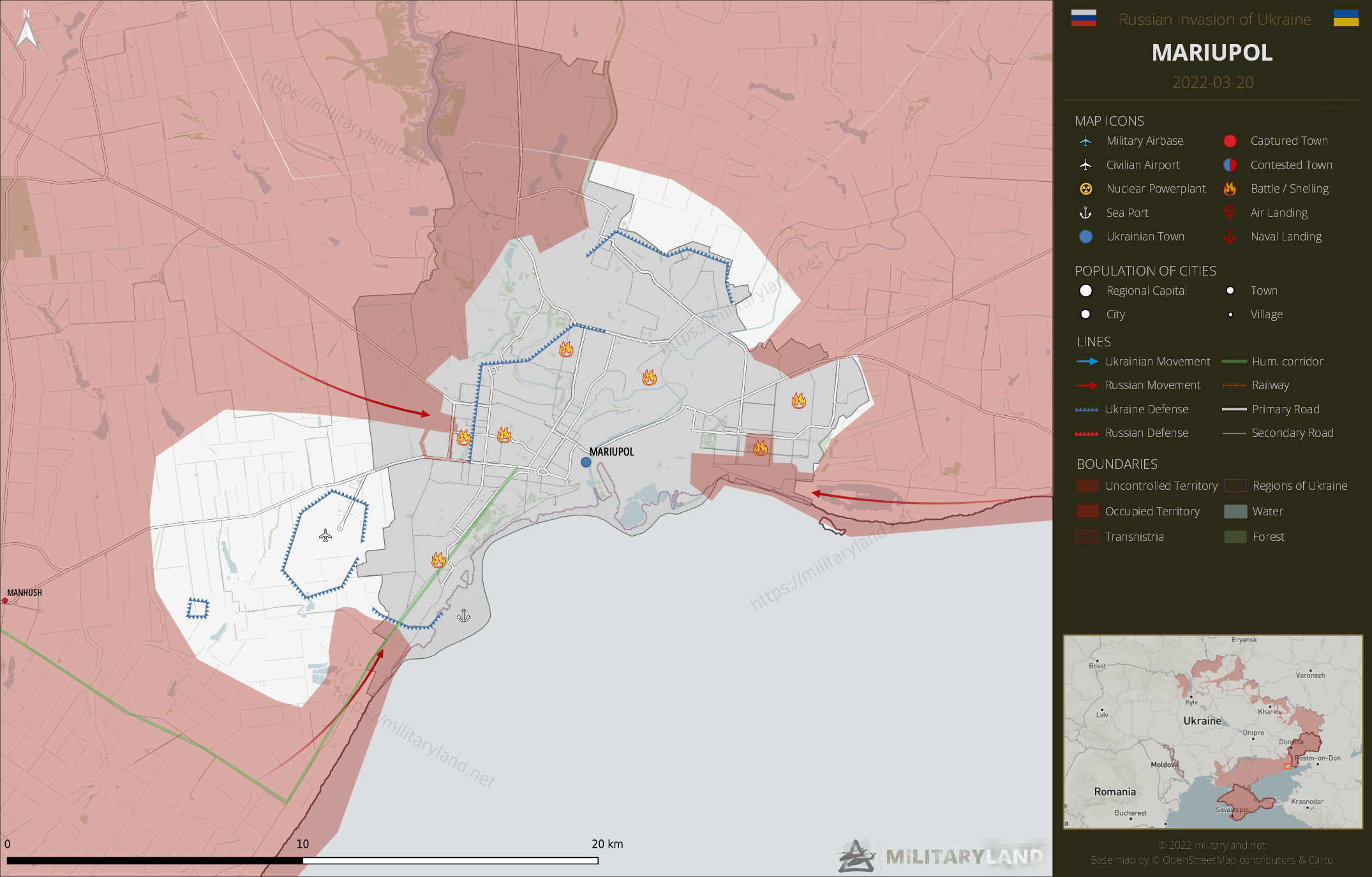 Russian ships shelled Mariupol for the first time. The city is under nonstop artillery fire, but Russian forces are unable to advance deep into the city and cut Ukrainian forces in half. Despite the fact the Ukrainian defenders are holding out and putting up a fierce resistance, this cannot go on forever and sooner or later, they run out of supplies.

Russian forces offered a green corridor to all Ukrainian soldiers in Mariupol, if they lay down their weapons. Ukrainian forces refused. 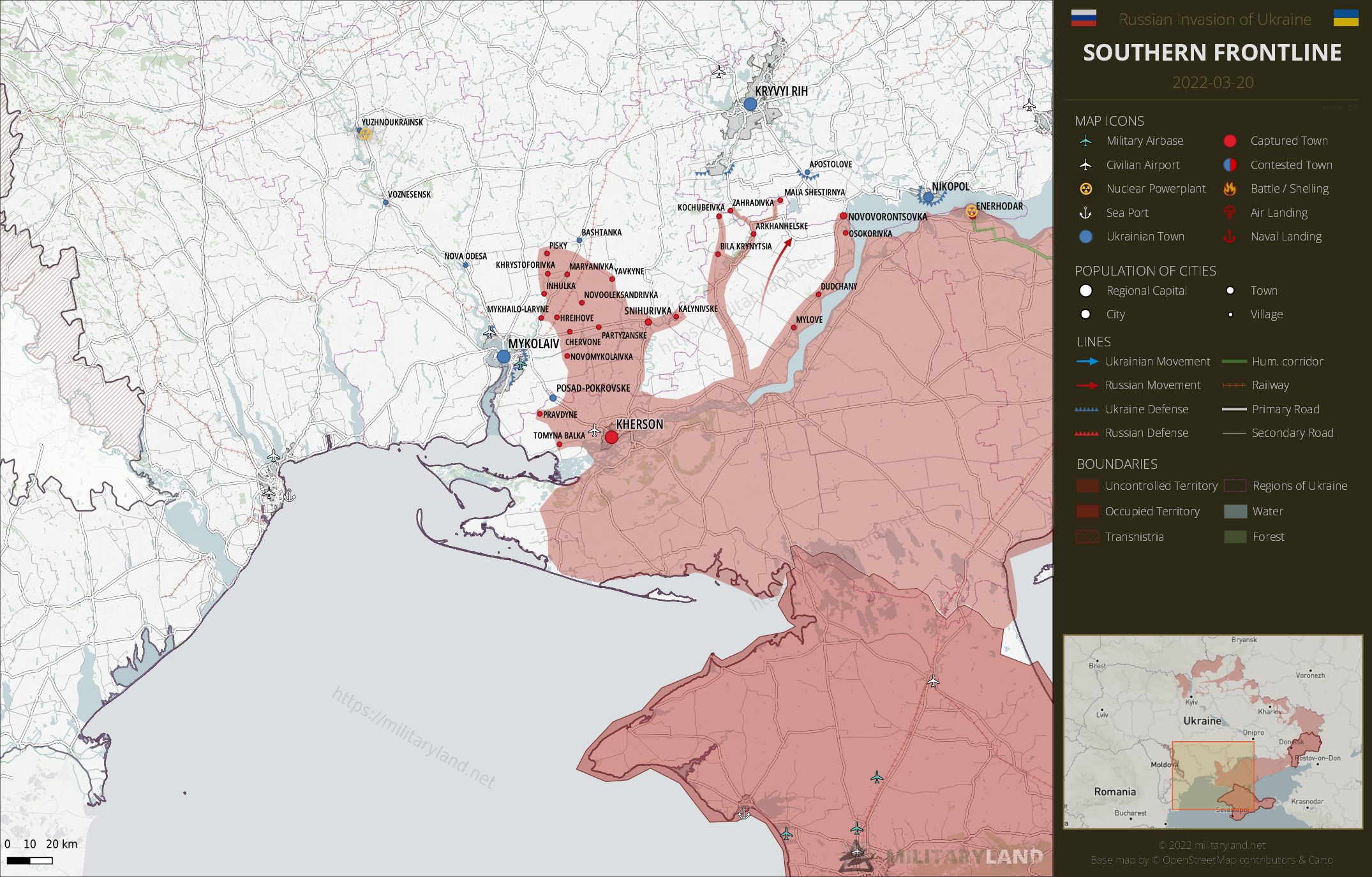 Neither Russian nor Ukrainian forces conducted any offensive operation in the area on Sunday.

Russian elements have pushed north towards Kryvyi Rih. They reportedly reached the vicinity of the city, but we cannot verify such information. Nevertheless, Kryvyi Rih seems to be the current priority of occupation forces in the south, while Mykolaiv has been put aside for now.

Ukrainian forces might try to use this opportunity to reach Kherson. If they could blow up the road bridge near the city, it might turn the tide for them in the area. 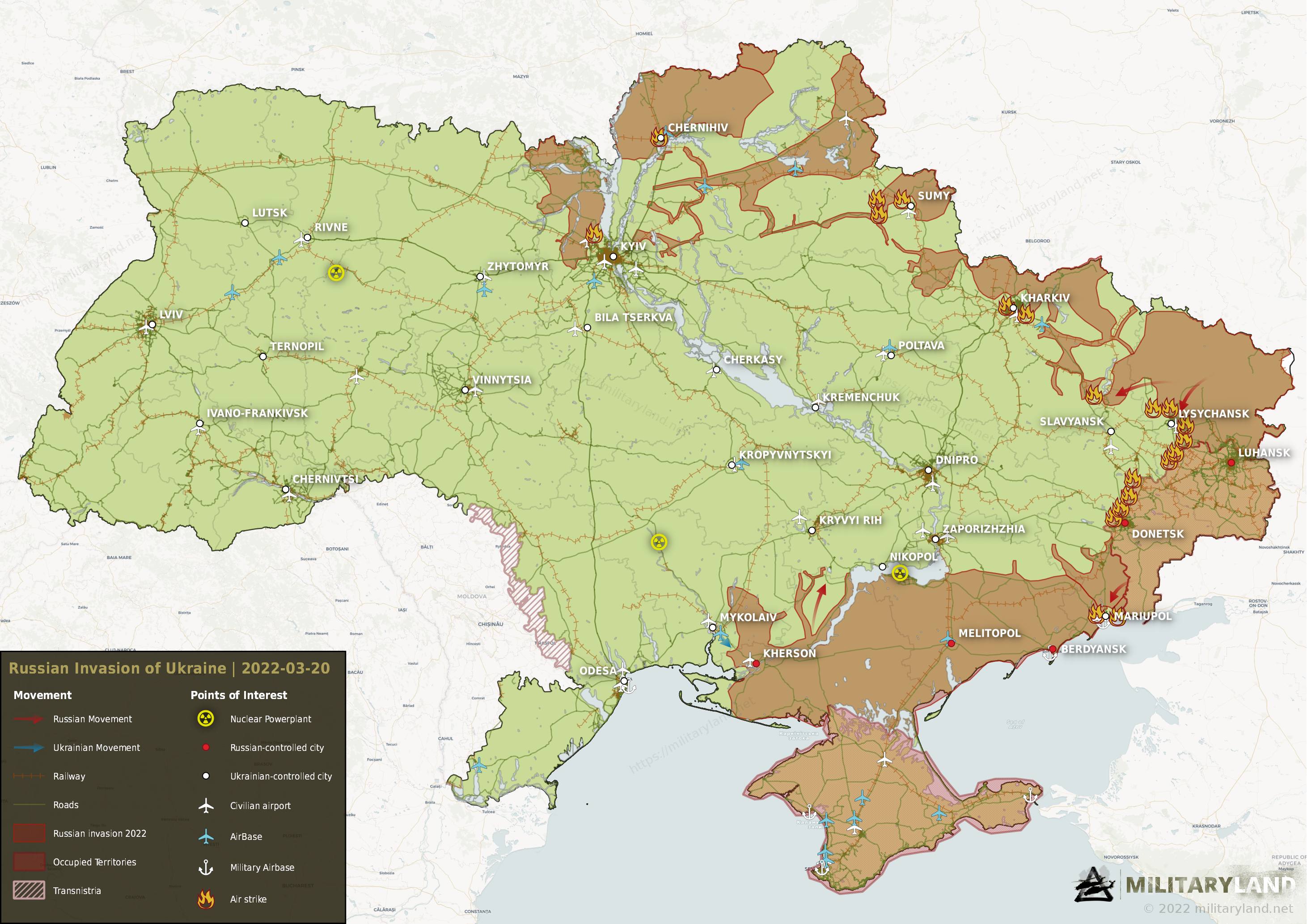 Let’s see whether this passes your spam filter:

To facilitate things, I have entered most locations that Saturday’s Ukrainian briefing on FB mentionned for the Krywyj Rih frontline in a Google Map – saves you the search. Obviously, the front runs along the northern border of Cherson District. You might want to update your map accordingly.

As above, this time for the Nikolaew front line. Had to leave out a few localities (max. 10 in Google Maps). Anyway unsure whether that line is still valid – the situation seems somewhat more fluent on this front.

NW of Kiew. Looks unchanged to me – same location names as in the previous Ukrainian briefings.

East of Kiew. There seem to have been some changes, i.e. Ukrainian territorial gains. Two towns that the Ukrainians still listed as Russian-controlled the weekend before have disappeared from that list, namely Welyka Dimerka, and Baryschiwka. Should the Ukrainians have recaptured Welyka Dimerka, the Russian forces in Peremoha to its SW might have been encircled and cut off from supply.

Thanks for the input. Most of the mentioned towns have been already marked on the map.
btw can you use some url shortener?

Can you recommend a good one? Tried one or two, but they both didn’t work on Google Maps itineries.

4. Saturday noon’s Ukrainian briefing on FB (I know, somewhat outdated, but then, there doesn’t appear to be much movement) included a longer list of locations east of Kiew where Russian troops tried to act (more defensively than offensively, acc. to the Ukrainians). These locations were “Lyubech, Slavuti č, Kovpita, Zolotinka, Mena, Nizhyn, Branytsia, Kalita, Bogdanivka, Lukashi, Romny, Nedrigayliv”. As concerns the Chernihiv area, the briefing mentionned that up to 3 Russian brigades were holding… Read more »

Here the map with locations named as Russian-held near Chernihiv.

3. The Ukrainian midnight briefing on FB, otherwise rather thin a/c military details, reports in the paragraph dealing with Nikolaew district that “the Ukrainian flag flies again over Makarow”. There are quite a number of Makariw/Makarows etc. in Ukraine, so the town isn’t easy to locate. Nevertheless, I came across a Makarowe in the northern part of Nicolaew district, which is reasonably close to where we last heard about that Russian force bypassing the town… Read more »

2. The Ukrainians report the re-capture of a village in Nikolaew region by paratroopers. See following comment for a possible location.

A couple of remarks: 1. The Russian Army is posting daily updates on their FB channel, which usually include for a couple of seconds a map of the area around Donezk city, claimed Russian territorial gains, and assumed Ukrainian positions (little blue marks). Might come in handy, especially as the Russians use village names that are notoriously difficult to reconcile with those found on Google Maps. In their Monday morning briefing, the map can be… Read more »

This is a gorgeous map, putting all else aside. I appreciate it’s detail and asthetic, a lot work went into it.

When Arabs defend themselves behind civilians they are called cowards, scumbags etc…

When Ukrainians defend the same, they are called heroes and Zelensky is proposed to receive Nobel Prize for Peace?!?!
Nobody care about civilians.

How bout letting them leave then? Russians know that if they let civilians leave then they will have no leverage against the defenders

Almost all the residents left in Mariupol are Russians.

Where did you get your info from?

Looks like RU will bypass Mykolaiv in favor of partially encircling it and then bombing the city as with other urban centers. Main thrust here is the Nuke plant north and securing a land path to Odessa. Not sure what the bridge situation is but a push toward Vosnesensk will further both goals so I hope the TD teams and UA regulars are ready for that. And as said above, great job with the situation… Read more »

I doubt, that Mykolaiv can be encircled. This would stretch the overloaded supply lines even more. If the Russians try that, than this “special operation” will come even sooner to an end.

They already tried that once and failed, losing most of a BTG and retreating back across the Bug(Buh) river.

Nice Job. Thanks for your hard work.

I will be very disappointed if the defenders of Mariupol are not commemorated in story and song.

We will see if you are so brave then yank. The longer this war continues, the more unstable Russia and Europe become. After this war, the true depth of your economic austerity will be felt. Decades of deindustrialization, debt monetization and overextensions will continue to ensure immense pain across the Empire exacerbating and compounding all societal pressures, especially in USA. The newly radicalized volunteers will further radicalize peoples of their own languages. (Those whom survive… Read more »

The fact that you aren’t willing to give respect to soldiers who are staring certain death squarely in the face without blinking makes me even less inclined to take anything you say seriously, beyond even the lame propaganda.

Get rekt, russian trolls
you will never take Ukraine

Absolutely. There is nothing brave and commendable about the action of Azov nationalists in Mariupol using coward tactics of civilians as human shields. Yet again even before Russia entered Ukraine, for years, they have been harrassing, intimidating and persecuting Ukranian civilians who spoke the Russian language. The Azov batallion (same Nazi symbol used as SS division Das Reich) was founded in Mariupol fo the sole perpuse not to engage other warriors in combat, but to… Read more »

Your actions and tactics are deplorable. You’re cheering for wholesale destruction of cities and murder of civilians because you can’t stand “nationalists” defending it. The whole world sees through this insane logic and lies and make no mistake, Russia will fail. Keep foaming at the mouth about mythical Nazis everywhere, and you will be treated like one.

There’s definitely some truth to that, along with Russia’s issues with NATO on its doorstep, there’s legit reasons one could use to support their arguments 100%. But what you can’t support is what they’re doing & how they’re prosecuting this. Not only in Ukraine but domestically inside Russia too. And there’s pages one could write on all this from many different angles, but if your main thing is going after nazi’s, that doesnt mean you… Read more »

Azov are insane fighters holding to the very end. Wished Ukraine could of provided the southern regions with more anti tank and anti air weapons. Zelensky did say the southern front was the most concerning at the start of the war. Should of probably try to mobilize troops earlier when the west was ringing alarms.

They shouldn’t hide behind civilians though.

The enemy of my enemy is my friend.