A stalemate. Russian forces are currently unable to launch any large offensive, relying on success in Mariupol and small breakthroughs. Ukrainian Army has no means to conduct proper counter-attack, mainly due to Russian air-superiority.

The promised new variant of maps is here. 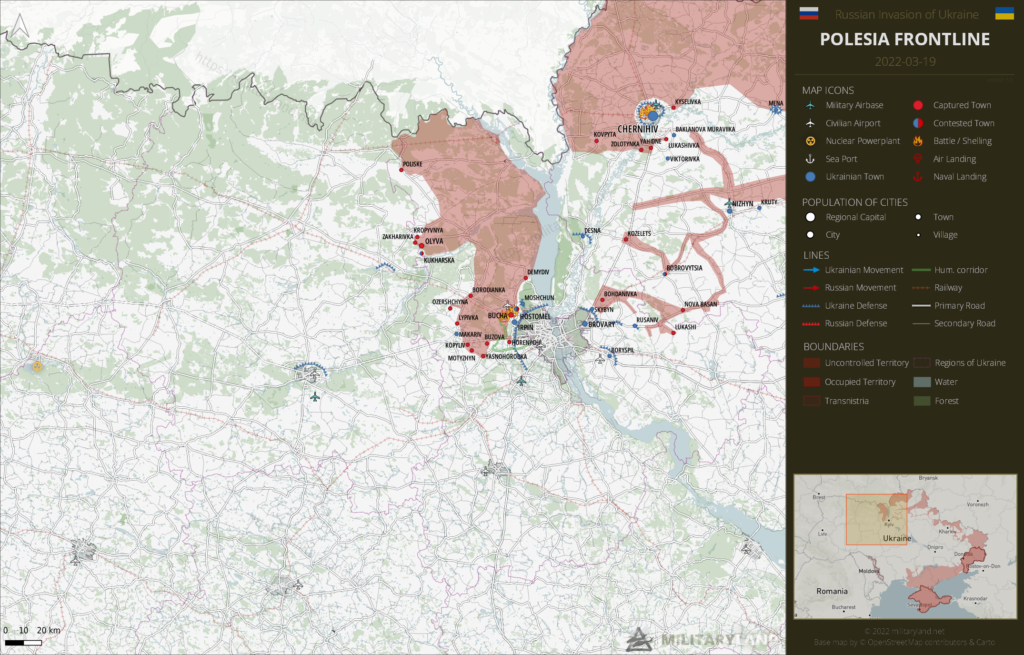 On the western bank of Dnieper, Russian forces moved into previously contested settlements and has continued to built up its forces behind the Irpin river. Neither side launched an offensive operation in the area on Saturday. However, that doesn’t mean there are no clashes alongside the contact line.

The situation on the eastern bank remains unchanged.

There was no change on the ground in Zhytomyr Oblast on Saturday. 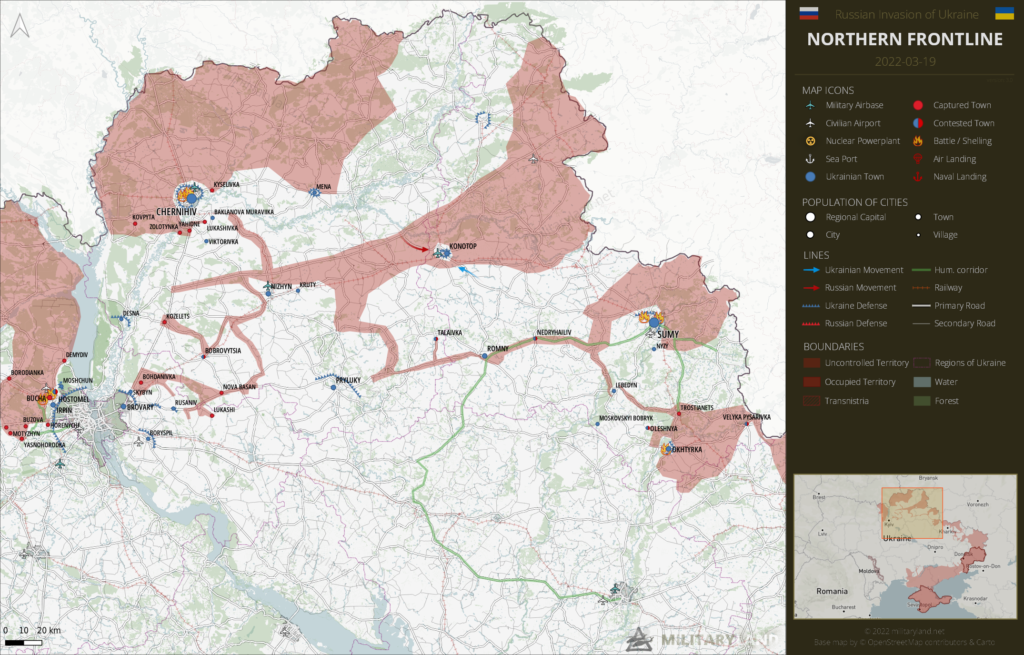 Russian troops entered a village of Lukashivka, without any resistance. The partial blockade of Chernihiv continues.

We still have no data on the roaming Russian element in the area of Hadiach, Zinkiv and Bobryk, so I decided to remove the marked area. The situation in other parts of Sumy oblast remains unchanged. 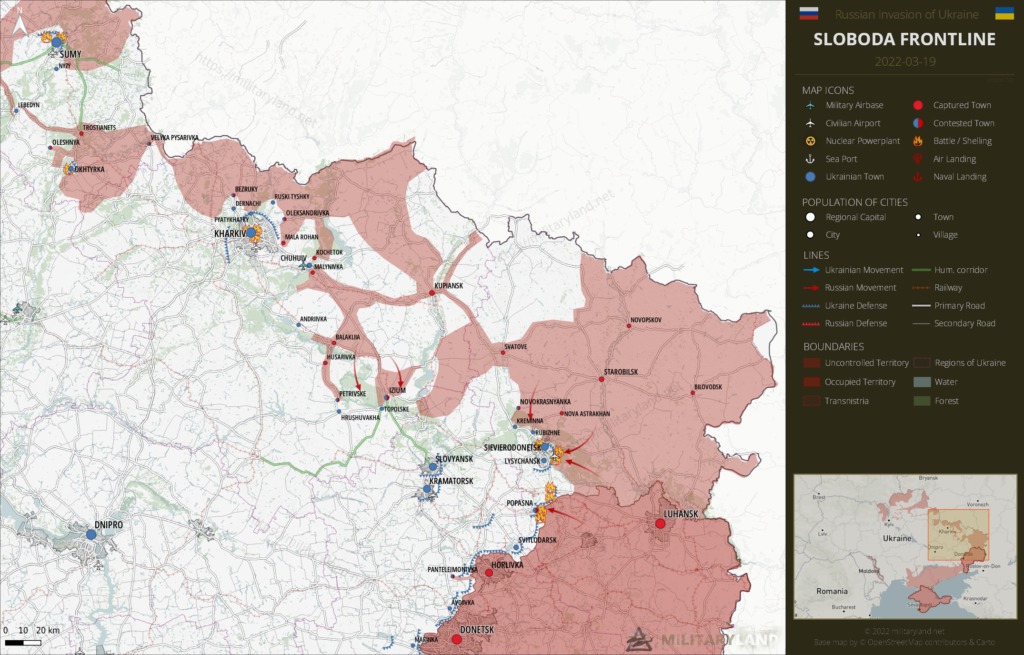 Heavy fights continued in the vicinity of Sievierodonetsk and Popasna. Most of Rubizhne and Kreminna is still under Ukrainian control. 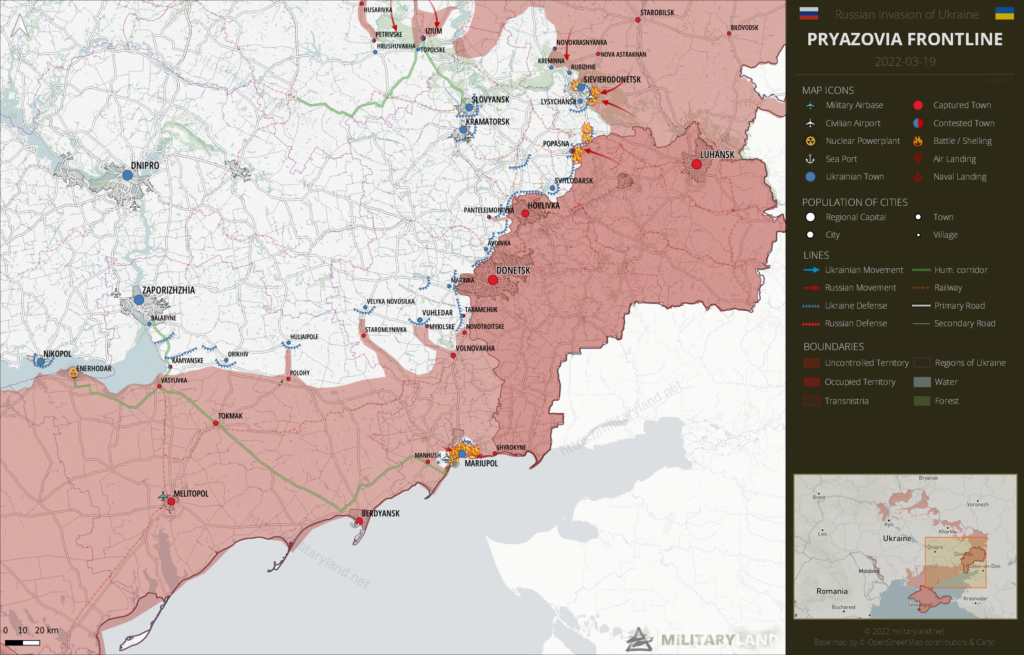 Russian Army continues to focus most of its forces towards Mariupol. There is a little to none movement towards Velyka Novosilka and Vuhledar. Russian artillery shelled Marinka and Avdiivka, but didn’t launch any offensive operation.

Ukrainian reported its forces ambushed an enemy convoy heading towards Zaporizhzhia, destroying most of the vehicles. 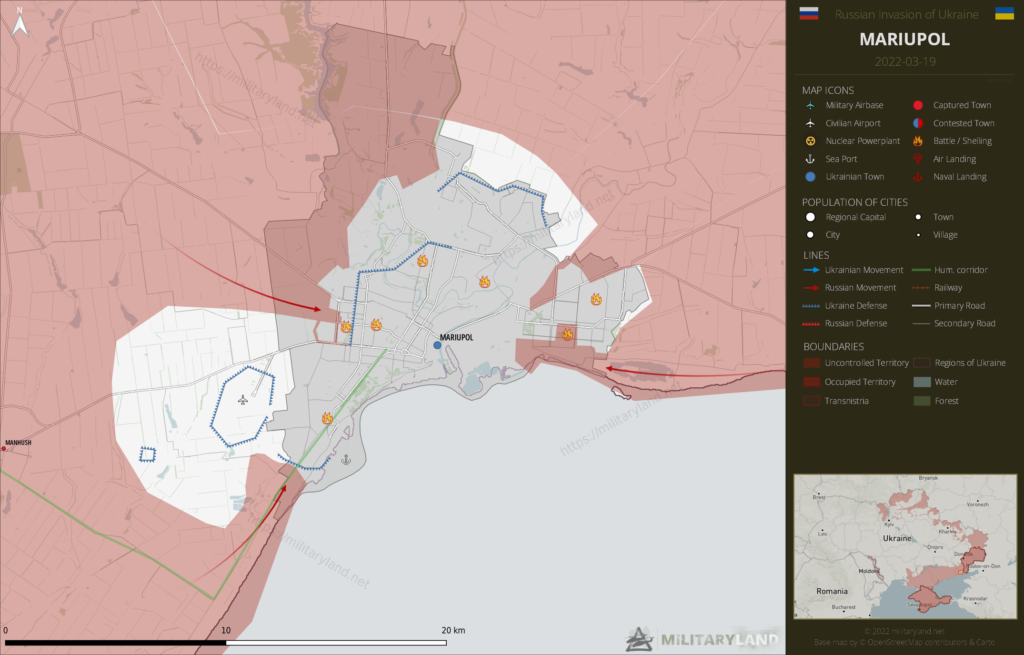 The situation remains tense, but Ukrainian Marines and National Guard didn’t allow any breakthrough through the main defensive lines inside the city. 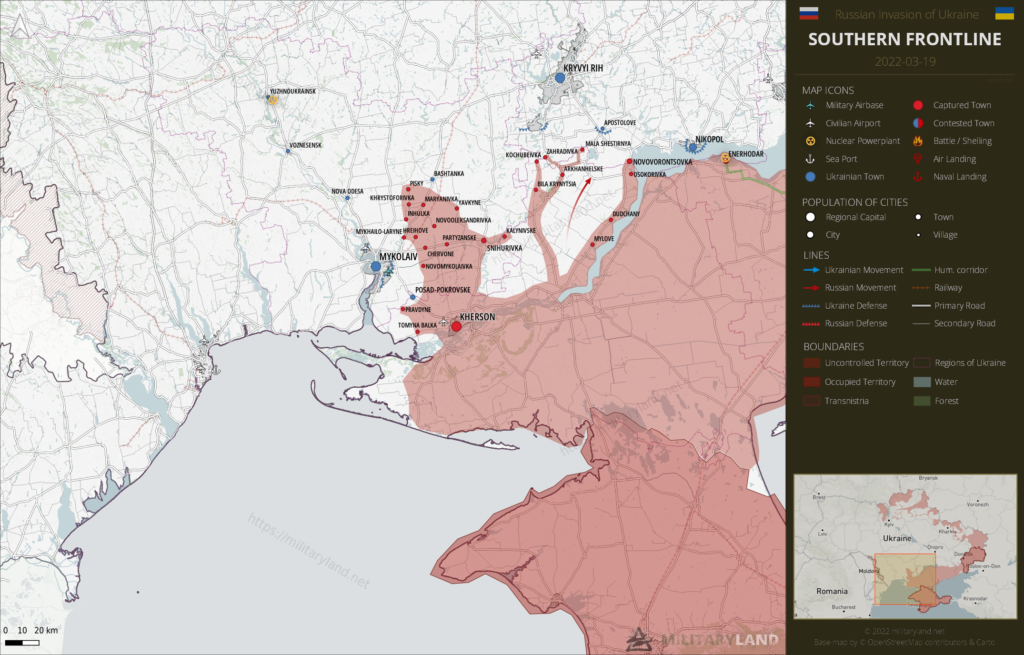 Ukrainian command clarified the location of occupied villages in Mykolaiv. The Russian spearheading element in the north was eliminated, but the enemy remains in control of several villages in the north of Mykolaiv.

It looks like the Russians will soon achieve what had to be a major war goal with is creating a land bridge between Donbas and Crimea. I’m sure they would have liked to take the whole coastline of Ukraine but I doubt that will happen now. What a damned mess.

Is there any visual proof that Ukrainians had regained Posad-pokrovske?

Thanks for all your hard work again

Thanks for all your hard woek

Zoom function is excellent. Bravo for all the hard work you are doing on this website.

Big fan of the zoom function on the maps – any chance you could add port / airfield icons for Crimea?

“Situation in Irpin remains the same, Russian forces control the northern part while Ukrainian forces the southern part of the town.”

You mean in Izium, right?

Yes, thanks for pointing it out. Fixed.

The new map is cool – but the zoom frame should has the linear scale also to measure distances.

If you don’t want to give a day summary then maybe a link to official Ukrainian General Staff? I am not aware of any Russian source worth reading but if there are some it would be perfect to link it too…

I mean it may be hard to find credible Russian sources on war in Ukraine since Russia claims it is not at war with Ukraine and just conducts “special military operations”. Also obviously both sides are engaged in war time propaganda which shouldn’t cloud the fact that it is Russia that invaded peaceful country and bombs civilian centers, evidence for that is just overwhelming and undeniable.

There is day summary in the begging of the page

Thank you for doing the updates.