Ukrainian officials confirmed today they are not able to lift the siege of Mariupol by military means, and also clarified the situation in the vicinity. Russian forces continue to try to break through Ukrainian lines in Donbas, without a success so far. 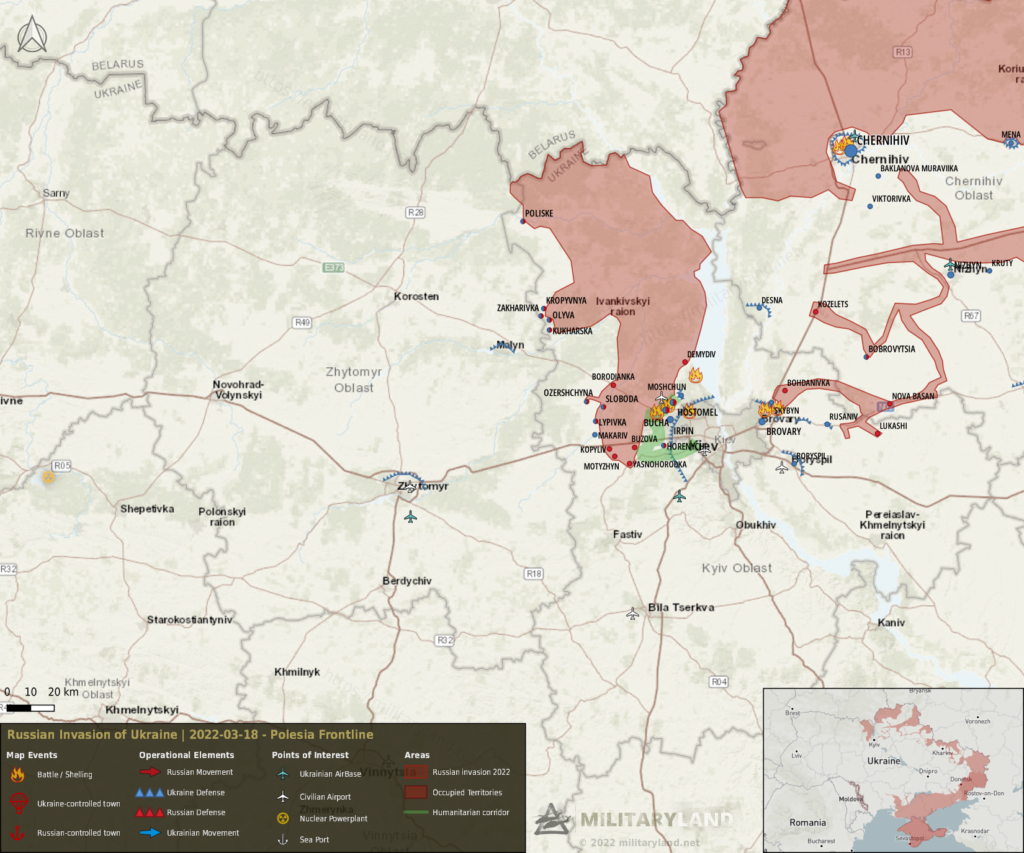 There was no change on the ground in Zhytomyr Oblast on Friday. 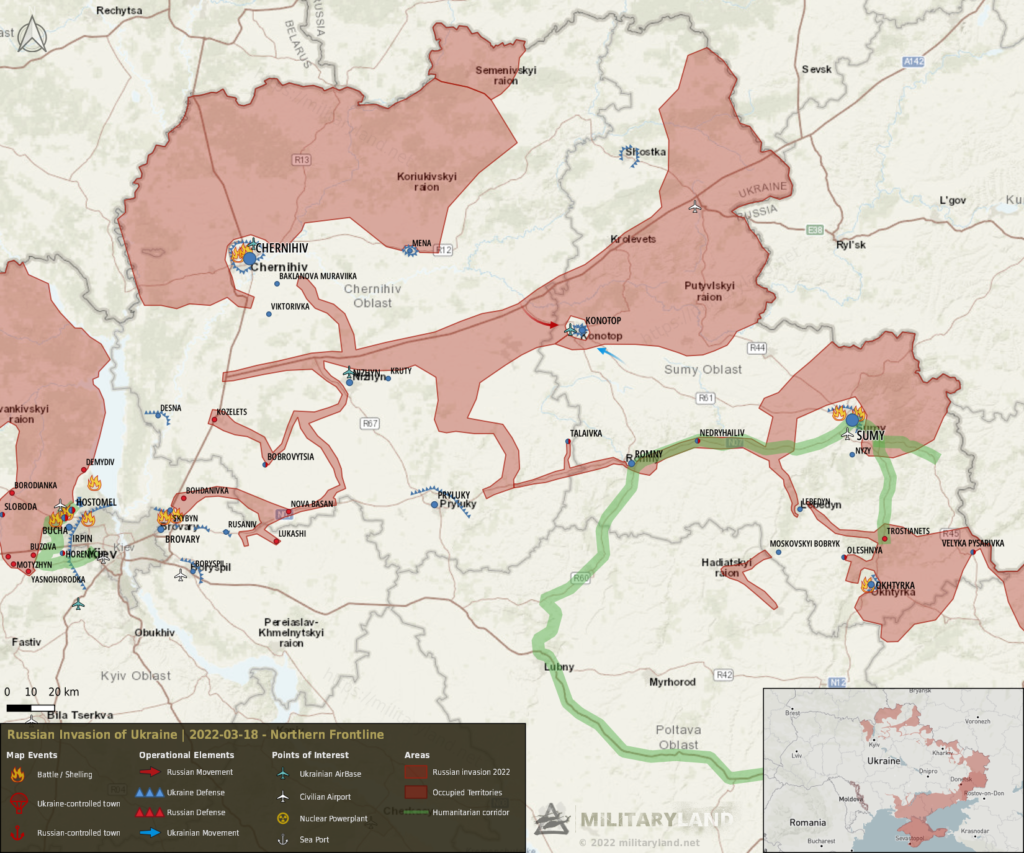 The partial blockade of Chernihiv continued on Friday as well. Neither side conducted an offensive operation.

Ukrainian forces ambushed a convoy in Trostianets and destroyed a number of Russian equipment. 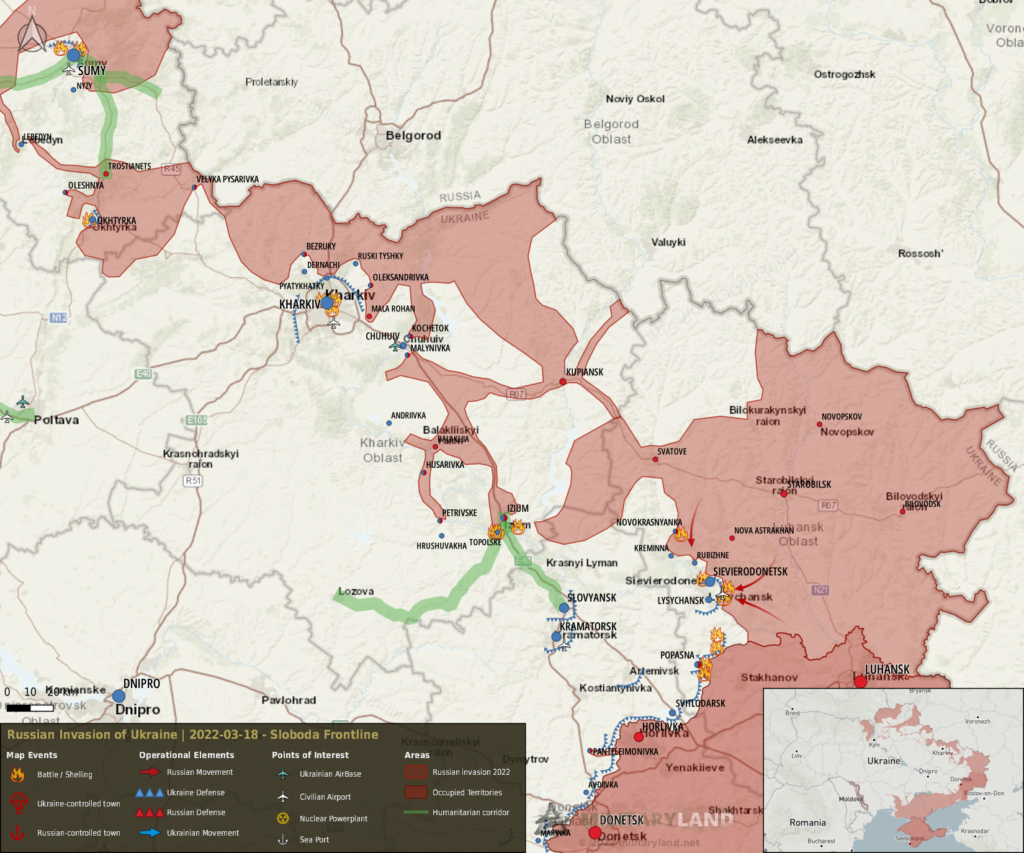 Russian troops continued an offensive operation towards Izium, but didn’t achieve a significant advance. They still control the northern part of the town, while Ukrainians the southern part.

Ukrainian officials confirmed that Russian forces entered the northern outskirts of Rubizhne yesterday, but failed to advance into urban areas in the south. Ukrainian forces repelled a Russian attack on Kreminna and Sievierodonetsk. The battle of Popasna has continued on Friday as well. 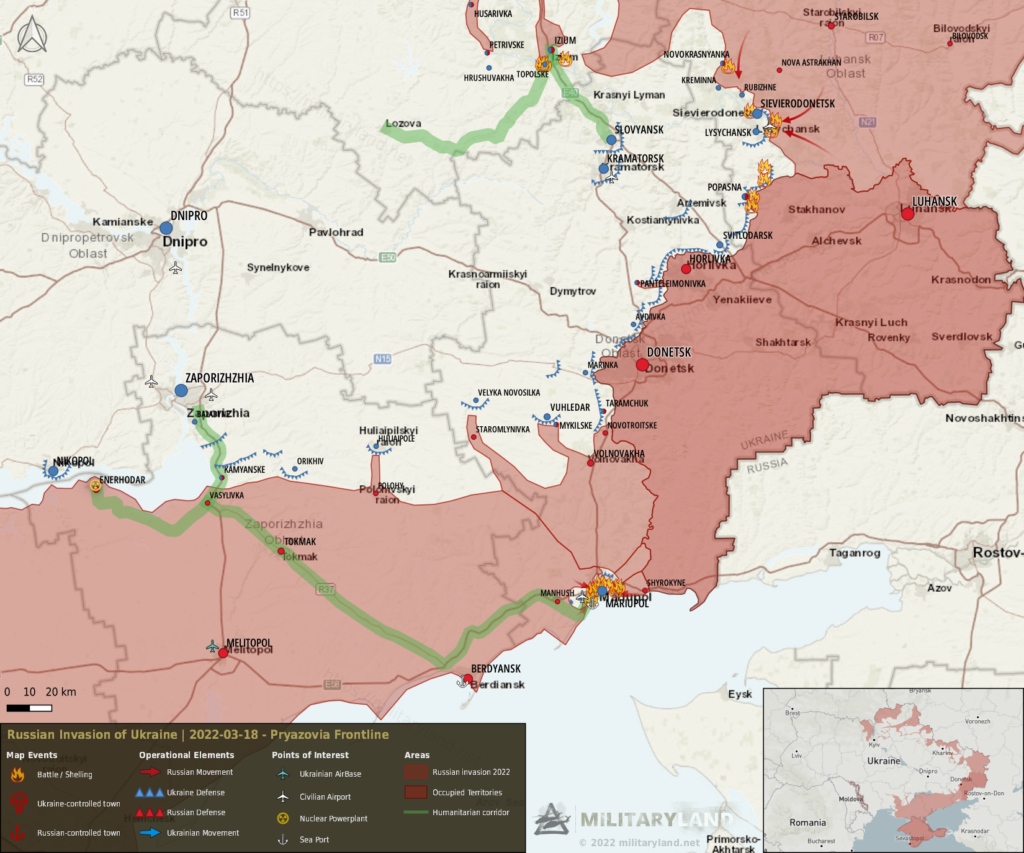 The advisor to the Ukrainian Presidential Office, O. Arestovych, clarified the situation around Mariupol. The nearest Ukrainian units to Mariupol are located north of Volnovakha, while other units are 100 km (fits to Velyka Novosilka), 120 km (fits to Huliaipole) and 150 km (fits to Orechov) away from the city.

Russian troops attempted to advance towards a village of Taramchuk near Novotroitske, but did not sucessed.

In the north, Russian forces attempted to break through Ukrainian defense lines towards Avdiivka, Verkhnotoretske and Krymske (near Horlivka).

Based on the information published by O. Arestovych, I marked the area between Berdyansk, Mariupol and Polohy as Russian-controlled. It’s clear there are no Ukrainian units in the area.

There was no change on the ground in Zaporizhzhia Oblast on Friday. 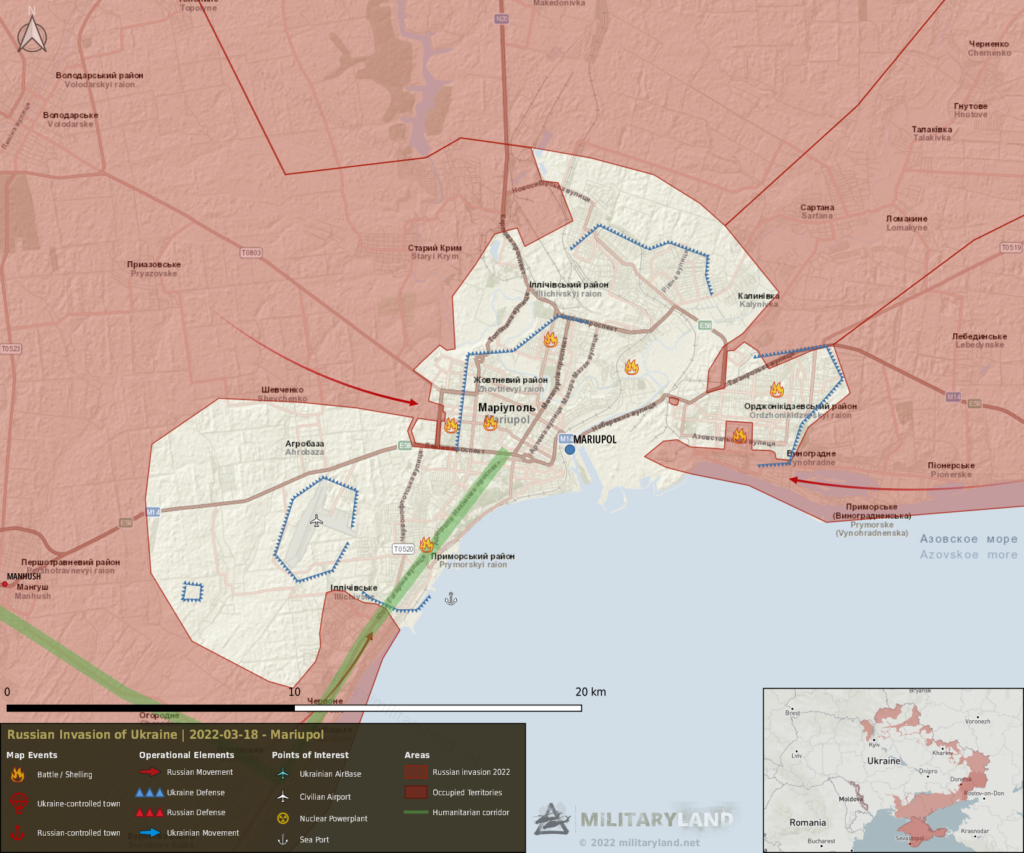 Russian forces captured a governmental building in the eastern part of Mariupol and also claimed they entered Azovstal Metallurgical Factory. The advisor to the Ukrainian Presidential Office, O. Arestovych, said a military operation to deblock Mariupol is currently impossible. All attempts to provide air support in the recent days failed, and Ukraine has no means to overcome Russian air superiority in the area. 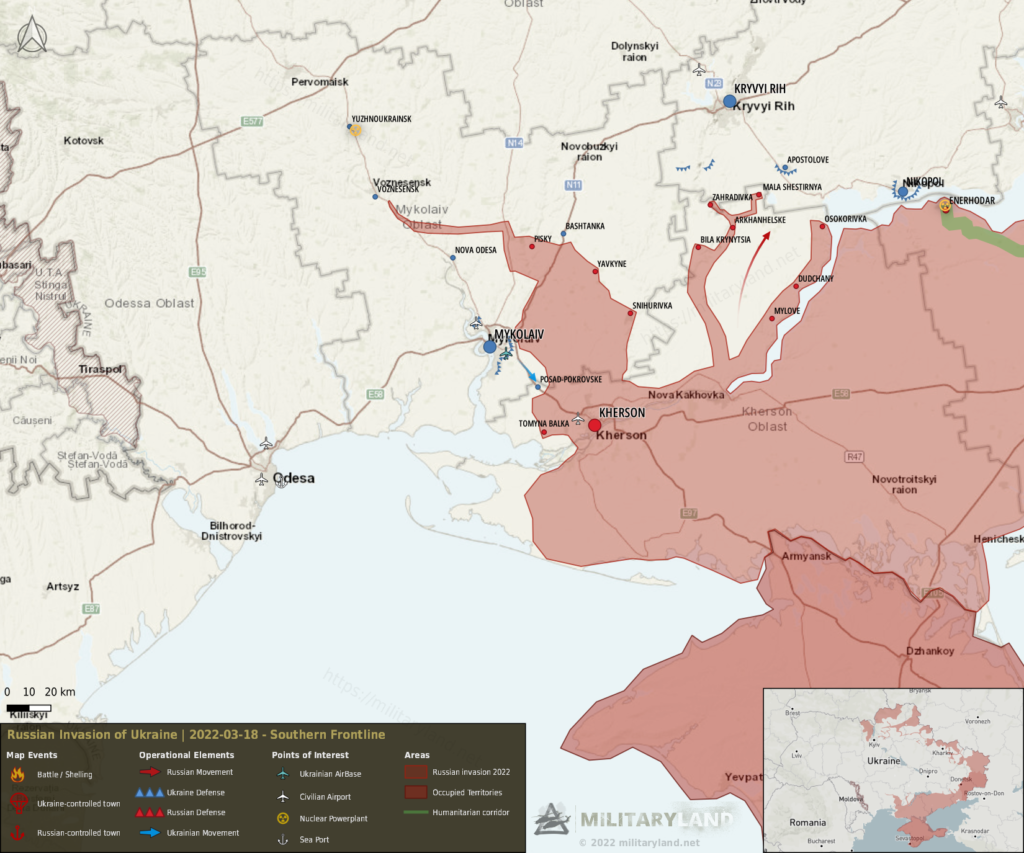 A Russian logistical convoy was ambushed by a local Ukrainian Territorial Defense unit in Snihurivka. Russian troops continued to reinforce and support the push towards Kryvyi Rih, but they didn’t advance any further. Based on the recent actions by Russian forces, we can assume they have given up on Mykolaiv for now and have decided to push towards Kryvyi Rih instead. 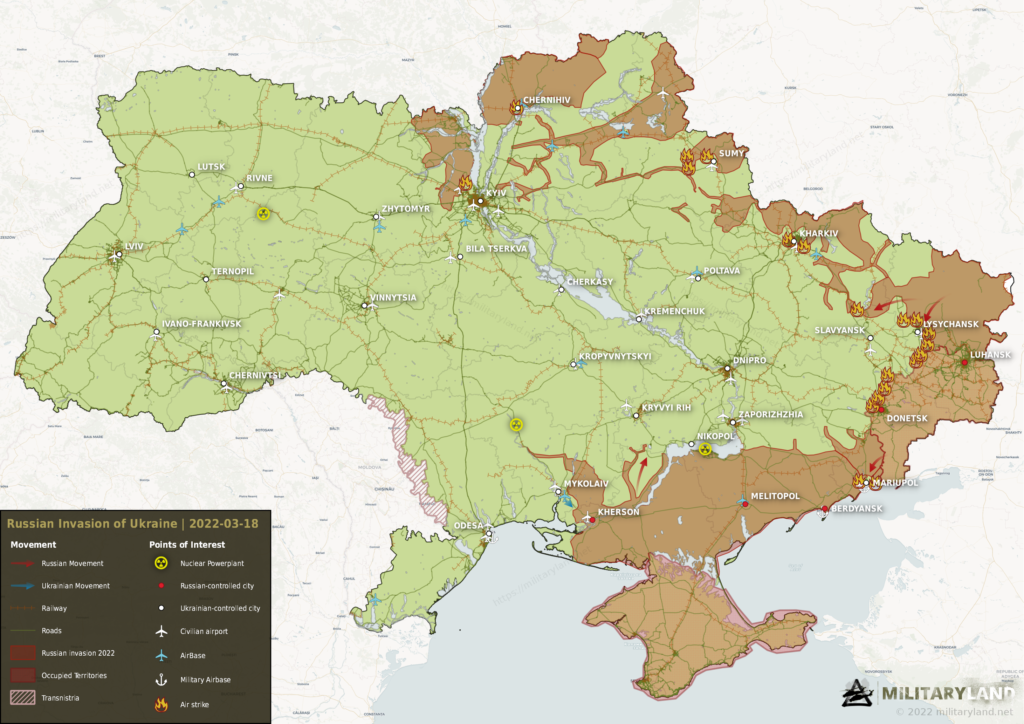 Up to now I did`t find anything mentioning of the destruction of the Ukrainian underground missile and ammunition storage site in Deljatyn near Iwano-Frankiwsk by the Russian Kinzhal hypersonic missiles on Friday 18th …
It seems to me, that Ukrainian army in these recent days had quite important losses …

It looks really bad that another barracks was hit with another mass casaulty. WTF is ukraine not disperising its soldiers to keep them alive.

I continue to read your reports every single day and every time, every attack is somehow “repelled” by ukr foces. Yet day by day, Russian forces keep capturing new area and checkpoints.

I would suggest you to update these details with Russian counterparts also so we can have a balanced outlook of both parties.

If Russian reports are confirmed by visual proof, it’s included in the summary.

• Putin held a rally at Luzhniki Sports Centre in Moscow yesterday. • Russia will not fulfil its first objective of taking Kyiv and deposing the government yet. • Kyiv attack has stalled and Ukraine has recovered 30+ settlements since the start of the invasion. • Ukraine said Russia’s two main routes into Kyiv have been blocked. (For reference, I am one of the few people that noticed this weeks ago). • On the east… Read more »

I like the analysis you’ve made here, realistic and unbiased. Congrats.

Nonetheless, I didn’t get what you mean on the last point you made: An overly inflexible Zelensky in the coming weeks will simply lead to more likelihood of NATO involvement in some way or another at a future date (e.g. thermonuclear weapons). Do you mean with this that Russia will use thermobaric bombs in case Zelensky doesn’t give in to Putin’s demands?

as I wrote another time, I have the feeling that the troops west of kiev (with the huge column of reinforcements), are just a diversion, to force the Ukrainians not to reinforce the southern and eastern front for me, the option of enlargement to NATO was discarded (nuclear conflict possible, and perhaps probable). The Ukrainian leadership has only two options: – diplomatically yield to the Russians (with the risk of losing one’s head), but becoming… Read more »

I am an American. I have watched as the you have valiantly defended your country: this is your war of Independence. I think now is the time when Ukraine needs to concentrate and attack an area which can be encircled and destroyed. Of course, this may not be possible in the large scale, but the small scale is always possible. In the south, the terrain is mainly plain (steppe) and maybe quick thrusts and lightning… Read more »

AZOG
Reply to  Shawn A. Bozarth

Thank you sir for the ‘Soviets’, this made my day today. Quick thrusts and lightning retreats will only work if they are impossibly quick and improbably lightning otherwise attack helicopters and artillery will make sure it doesn’t end well. At this point Ukrainian army cannot do anything in the Eastern Ukraine, they cannot move, they cannot attack, they cannot even setup ambushes, because there are no more Russian unprotected convoys doing 100km marches. Mariupol is… Read more »

Anonymous
Reply to  Shawn A. Bozarth

Well you have Putin’s speeches gleefully speaking of Soviet times. Even referring to borders from Soviet times & claiming Ukraine should not exist period, before giving his own version of history regarding Ukraine & eastern europe & the post ww2 hierarchy. You have similarities to purges of the past, just done today with a 21st Century spin. But I’ve counted no less than 10 Soviet flags on advancing vehicles, with some Soviet flags being mounted… Read more »

Yes a few soviet flags but that is just nostalgia on the Russian part. It’s not only inaccurate but deeply offensive to other parts of the ex-Soviet Union. I have friends in Ukraine, Georgia and Azerbaijan and they definitely do not see it as a Soviet action – only Russia. As for flags,.. you still see Americans flying the confederate flag but that shit is long gone, same as Nazi’s – all dead with the… Read more »

I also just saw this – head of Roscosmos, the Russian space agency, posted pictures on Telegram of media coverage speculating the cosmonauts were supporting Ukraine, and said, “Here some bandit cowards and their Anglo-Saxon sponsors don’t know what else to come up with in their information war against Russia.”
Anglo-Saxons!!!! Does he know those people were defeated in 1066 by the Normans ?

Indeed, just like the two american wars of independence – the revolution against the brits and the fight for southern independence.