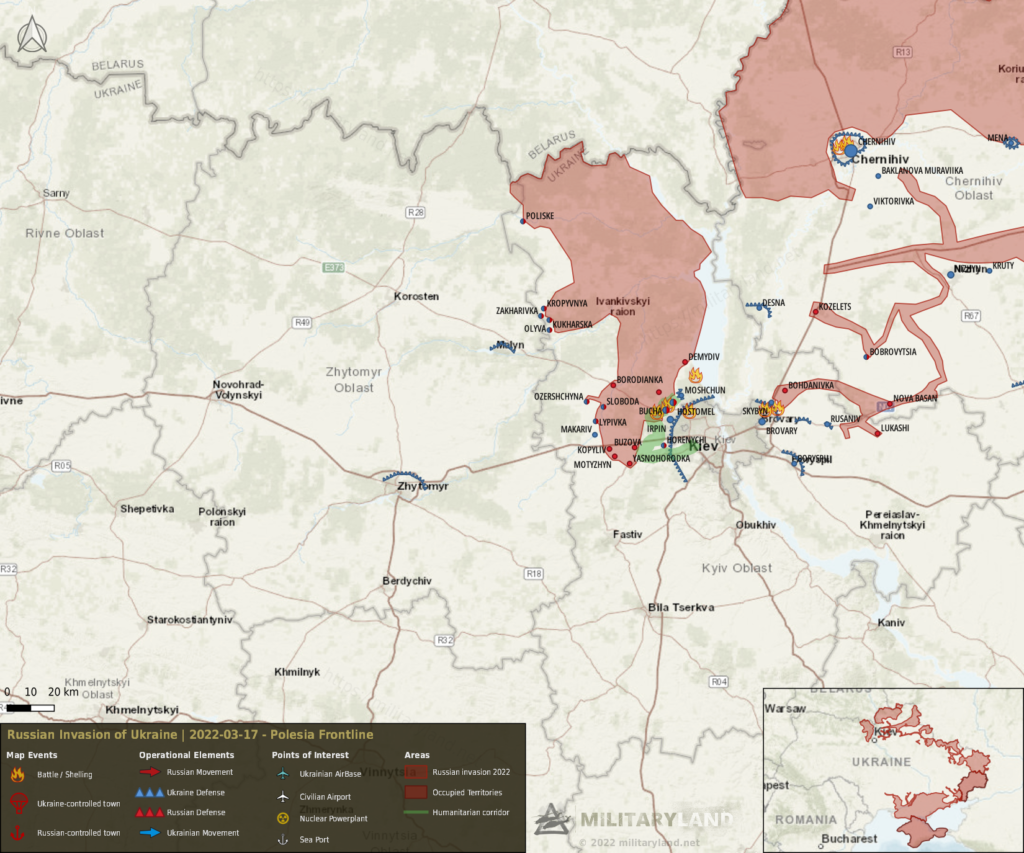 Russian forces didn’t conduct any offensive operation in the area. The main focus of the enemy forces was to resupply and refuel units on the contact line and secure the rear.

The enemy sporadically shelled Ukrainian positions in the vicinity of Brovary, but didn’t launch any assault.

There’s been no change on the ground in Zhytomyr Oblast. 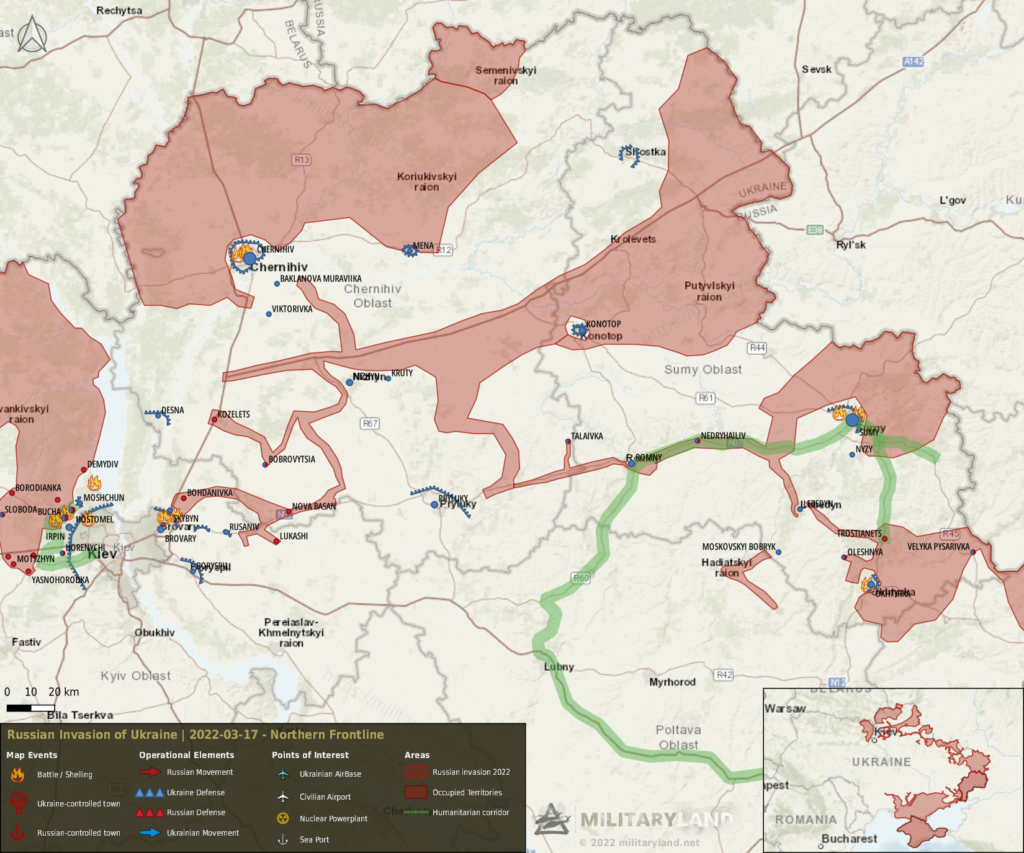 There’s been no change on the ground in Sumy Oblast. Russian forces continued to hit Sumy with airstrikes and artillery. 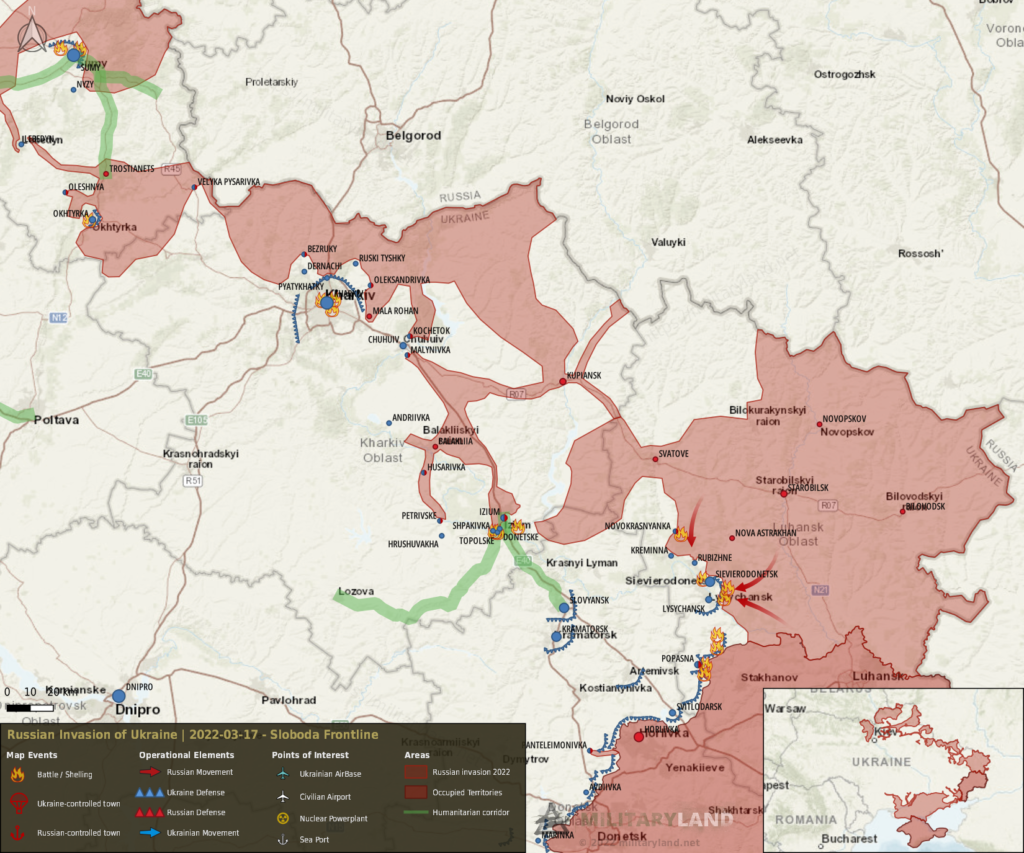 Russian troops resumed offensive operation towards Izium, but didn’t succeed to capture southern part of the town. Ukrainian forces ambushed a Russian convoy near the town and destroyed several vehicles. The enemy continued to bomb Kharkiv.

Russian forces entered northern part of Rubizhne. They claimed to have taken the city, but the released video shows only a small portion of the northern outskirts. Ukrainian forces successfully repelled today’s attacks on Sievierodonetsk and Popasna. 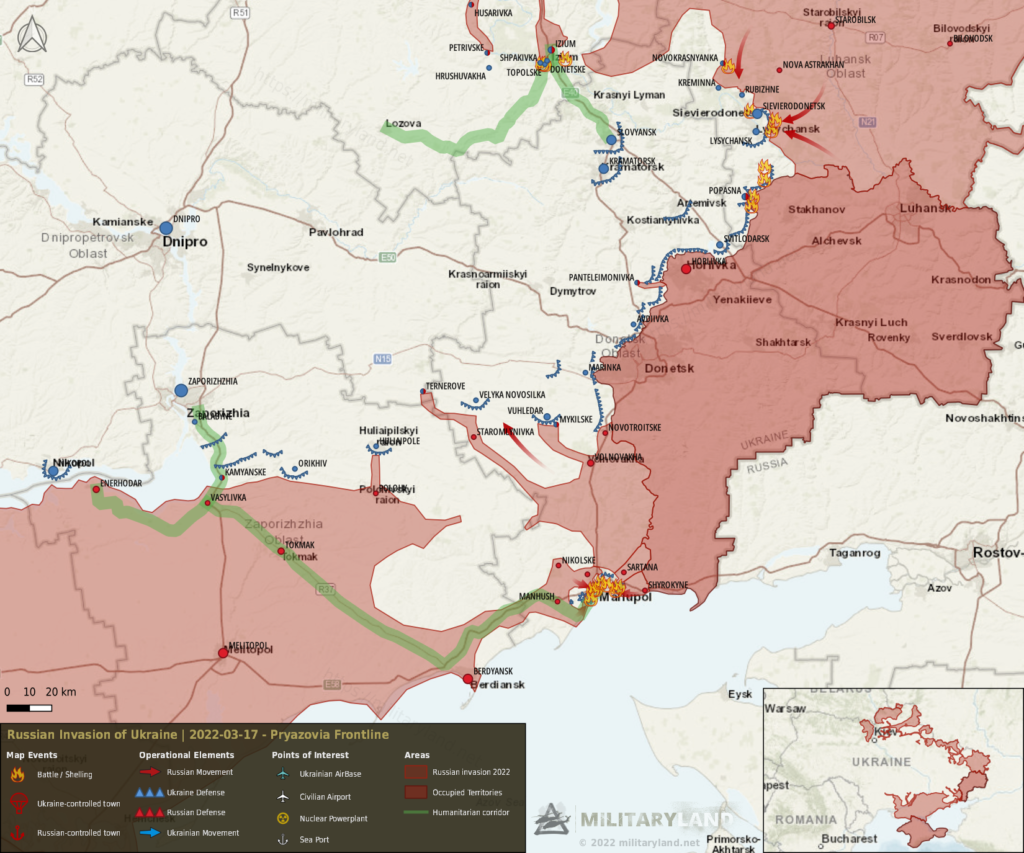 Russian troops entered the gray zone in the industrial zone near Avdiivka, but didn’t gain any new ground towards the town. Situation in the south remains the same.

There’s been no change on the ground in Zaporizhzhia Oblast. 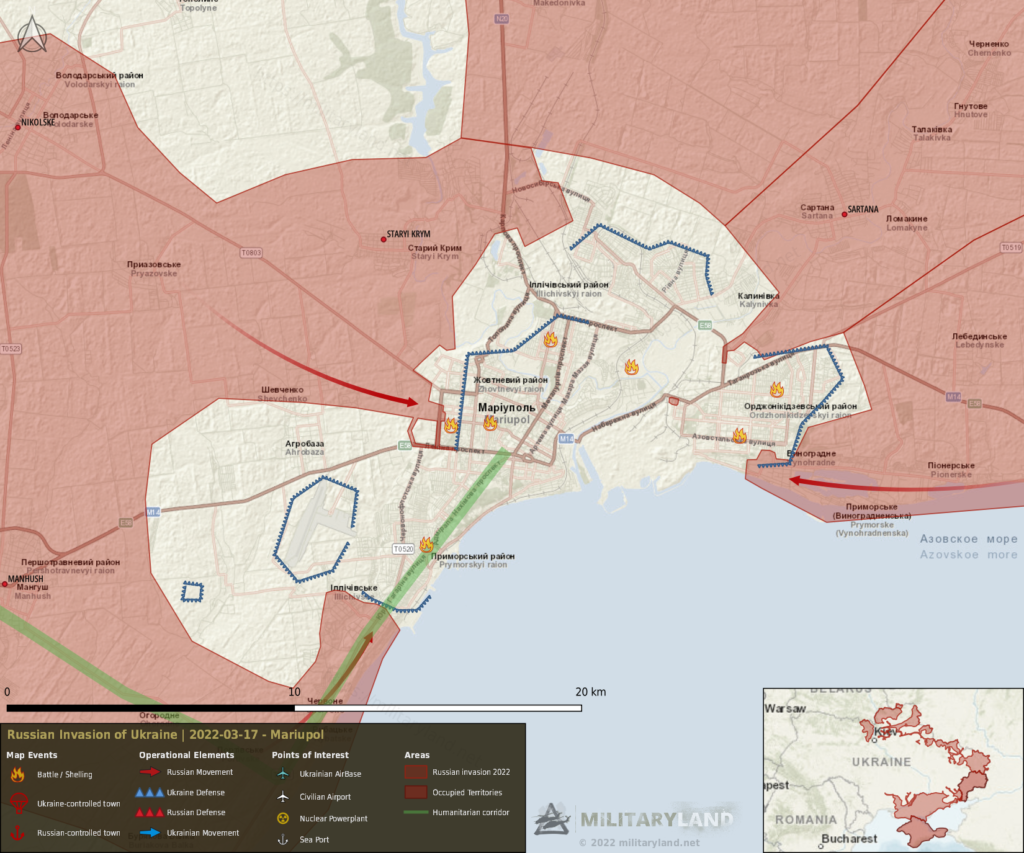 Mariupol is witnessing heavy street fighting, house to house combat. Ukrainian held territory is slowly shrinking, but due to the lack of footage, we are unable to determinate the actual situation in the city. Ukrainian forces are reportedly preparing a de-blocking operation. 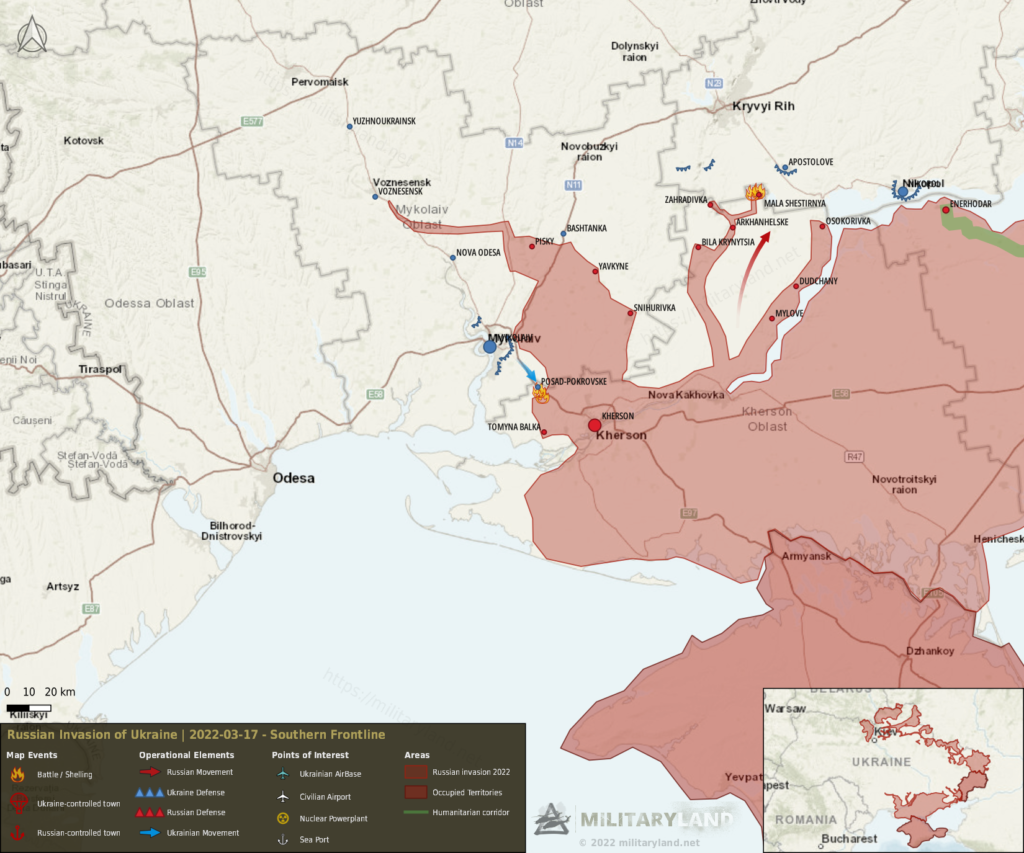 Ukrainian forces launched a counter-offensive towards Kherson. The operation was supported by elements of 28th Mechanized Brigade that arrived to Mykolaiv from Odesa. Ukrainian troops pushed alongside road M-14 and liberated Posad-Pokrovske (in Kherson Oblast).

It’s currently unclear what is the status of Russian spearheading element in the area of Pisky and Yavkyne.

Ukrainian forces liberated Posad-Pokrovske, as mentioned above. In the north, Russian forces reached a village of Mala Shestirnya. Ukrainian troops reportedly stopped the advance in there for now. 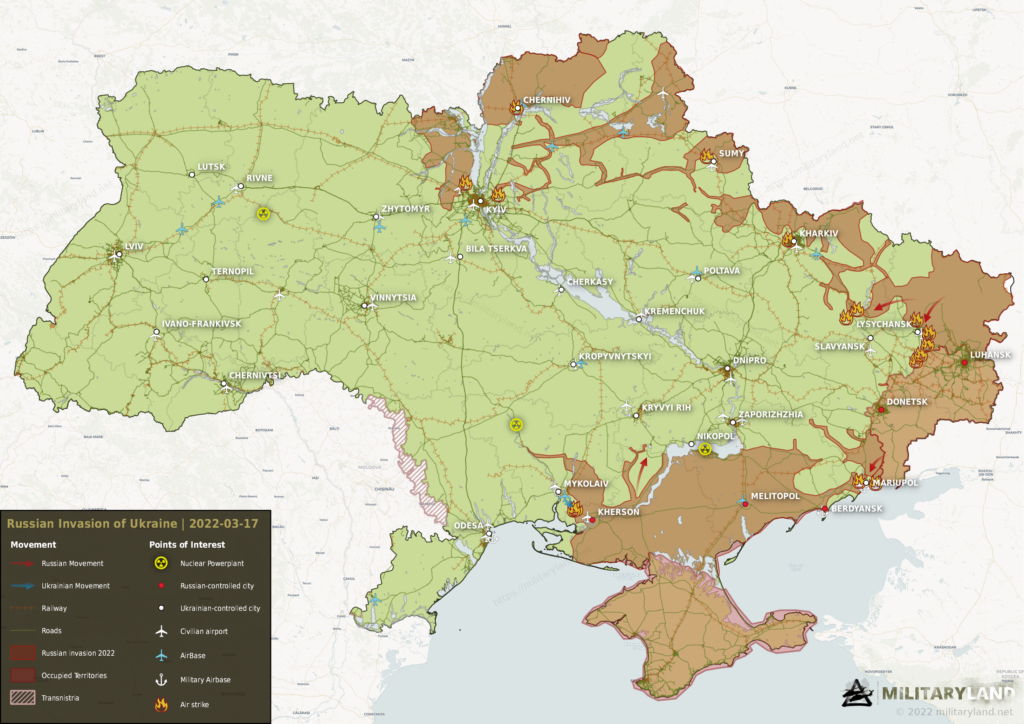 If you’ve read this far, let me say thank you for reading the summaries and maps. I really appreciate your feedback, and I’m constantly improving the map. There is currently a new version in works, which should assure a better readability and generally a nicer look.

Did there an airport and a marina had been forgotten in Westen Mariupol? Or had they been destroyed?

From what I see here the Russians are attempting to surround the Ukrainian forces in several locations. It doesn’t look good for Ukraine tbh.

A technical comment: Seems to me that you have mistaken Ternove (Chuhuiv) for Ternove (Zaporoshje). Don’t think the Russians have made it to the latter already. The former, in the Charkhiv periphery, makes more sense.

Can you send me the location, please? I am unable to find any Ternove near Chuhuiv.

Thanks. You are probably right, I’ll correct it for the next summary.

Nice work as always. My way of knowing how the fronts are doing.

Since my last comment went through: I recommend a closer look at the Trostianets area, in-between Sumy and Charkiw: 1. Following the Ukrainian air raid of Russian artillery in the city centre (my comment from yesterday), the maior now reports on FB only sporadical presence of Russian troops, on their way to Okhtyrka. He reports quite some fighting over the last days, due to which all surrounding villages were now free of Russian troops. https://www.facebook.com/yura.bova.trostyanets/posts/7155002041208857… Read more »

No idea why my comment from yesterday didn’t get through. I’ll give it another try with fresh info, afterwards I will give up.

Russian shelling of Chornobayivka, an immediate suburb of Cherson city, suggests the town has changed hands to the Ukrainians. This makes me think that the Cherson airport, which the Ukrainians took yesterday (see my disappeared comment) is also still under Ukrainian control.

Kherson airport is under the control of Russia, the day before yesterday it was fired from MLRS

Right. And the video here has been taken from a plane. Dream on.

the video was shot by a Russian military, he orders the second in Russian without an accent to withdraw the surviving equipment, this video confirms my words that the airport was fired from MLRS. There is a distance of about 30-40 km to the Ukrainian positions

That video is not from a plane, but a handheld video from a Russian servicemember on the ground. That is Russian being spoken, with a distinct Russian accent. It is clear that it was a missile strike, and they’re inspecting the aftermath, and looking for surviving equipment to be salvaged. You can even see Russian soldiers walking around at the end. Ukraine does not have control of the Kherson airport. The fact you speak with… Read more »

Hello,
I checked it, and it got blocked by spam filter for too many links. I had to approved it manually.

Thx. Will split my coming posts.

Hi, been following you because of previously accurate and unbiased reporting. But the last few days I am having second thoughts. How exactly are the UKR forces going to de-block Mariupol? From which direction? Your own map shows that its completely surrounded and in depth! What happens if, the already surrounded and penetrated Izium falls? What about Rubizhne, if the RU already control the northern part? . Looking at your own map its easy to… Read more »

I’ve not seen any reports that Izium is surrounded yet, although I agree that it’s most likely a very high-priority objective for Russia, as its capture would spell big trouble for all Ukrainian forces south-east of it. As far as I know, Russian troops are occupying the part of the city north of the river, but can’t seem to cross it, or at least to hold positions south of it. I also agree that breaking… Read more »

Seriously. He makes maps, passes along information and consolidates it. If someone says there is a plan to de-block Mariupol, he passes it along without commenting on it. Seems to me you are looking for some commentary that isn’t there. Lighten up pal.

AT
Reply to  George

from a humanitarian point , Mariupol is surrounded, from a military point it is not

you would not risk civilians in trying to leave Mariupol , you would certainly risk military personnel to resupply Mariupol

The word is impossible. Western media keep saying Ukraine can triumph against a superpower with a few extra weapons from NATO. Why? Cynical propaganda. NATO is all about selling weapons and gaining geo-political influence to facilitate that. They care not if every man, woman, or child perishes in Ukraine. Industrial military complexes do not have empathy. Any reduction in Russian military capability is justification for prolonging the war. Ukrainians better wake up before there is… Read more »

Russia does not benefit from the deaths of civilians, it is not profitable for Russia to antagonize to some extent the still pro-Russian-minded part of the east of Ukraine. It probably sounds like propaganda, but 40 thousand people were evacuated from the districts of Mariupol occupied by Russia yesterday, why were they not released before? because if you try to get out of the encirclement, the Ukrainian military will be destroyed on the march. They… Read more »

there is a large grouping of Ukrainian forces in Mariupol (I heard about the figure of 15 thousand people) and in order to block it and exclude the possibility of deblocking in that place, you need to keep most of your armed forces. But since limited Russian troops are involved in the war, this would have shackled them and prevented them from solving more important tasks in the north. I think that’s why they are… Read more »

Russia isn’t a superpower, and with its violent schizo outburst, it committed itself to be treated as world pariah. “NATO is all about…” whatever man, NATO is a defensive alliance, it has no political will to invade anyone. The idea of NATO “encirclement” and somehow getting 30 countries to agree on invading Russia is ludicrous, it exists only in Russia’s twisted, persistent victimhood paranoia. So you want to join NATO, huh ? I’m gonna invade… Read more »

we know these famous defensive bombing by NATO, it’s not even funny
https://en.wikipedia.org/wiki/List_of_NATO_operations

Look legit to me…which do you take issue with?

NATO ceased being a defensive alliance after the Cold War ended. Afterwards, policy hawks in Washington DC used it as a justification for it’s aggressive actions. And when other nations in NATO protested, they got berated (remember “freedom fries”?). Add to that, Russia wanted to join NATO at one point and was kicked aside by those policy hawks. If those in the west simply allowed them in, this horrible situation would not be happening. Russia… Read more »

Leroy, democracy means that anyone could be President. That includes actors or, as you say, “clowns”. Arnold Schwarzenegger is also an actor and became president of California; Ronald Reagan was also an actor and became President of the United States. People voted. Deal with it. About nazis: there are neonazis everywhere. There are neonazis in Ukraine, as there ara neonazis in Russia or Serbia. But having a bunch of neonazis here and there does not… Read more »

I know a few Crimerian Ukrainians. Its become a totalitarian police state, actually worse than it is in Russia itself. At first many were welcoming and wanted to be part of Russia but now after losing so many freedoms so many have regret and want to Russia to leave. This is the price of living under Putin.

Well as an answer to fellas that gave me a downvote for a rational conclusion, less than 24 hours later the UKR side said the exact same thing. Impossible to de-block Mariupol. And I quote from the militaryland.net tweets: Military operation to deblock #Mariupol is currently impossible. All attempts to provide air support failed. Ukraine has no means to overcome Russian air superiority in the area, says advisor to the President’s Office O. Arestovych AND… Read more »

I found the maps and geopgraphy much easier to understand here than on ISW. Well done!

Some general conclusions in the end would be nice