Due to the ongoing Ukrainian offensive in Donetsk Oblast, we’re releasing an extra summary solely focused on the Siverskyi Donets Front. The classic summaries remain bi-daily. 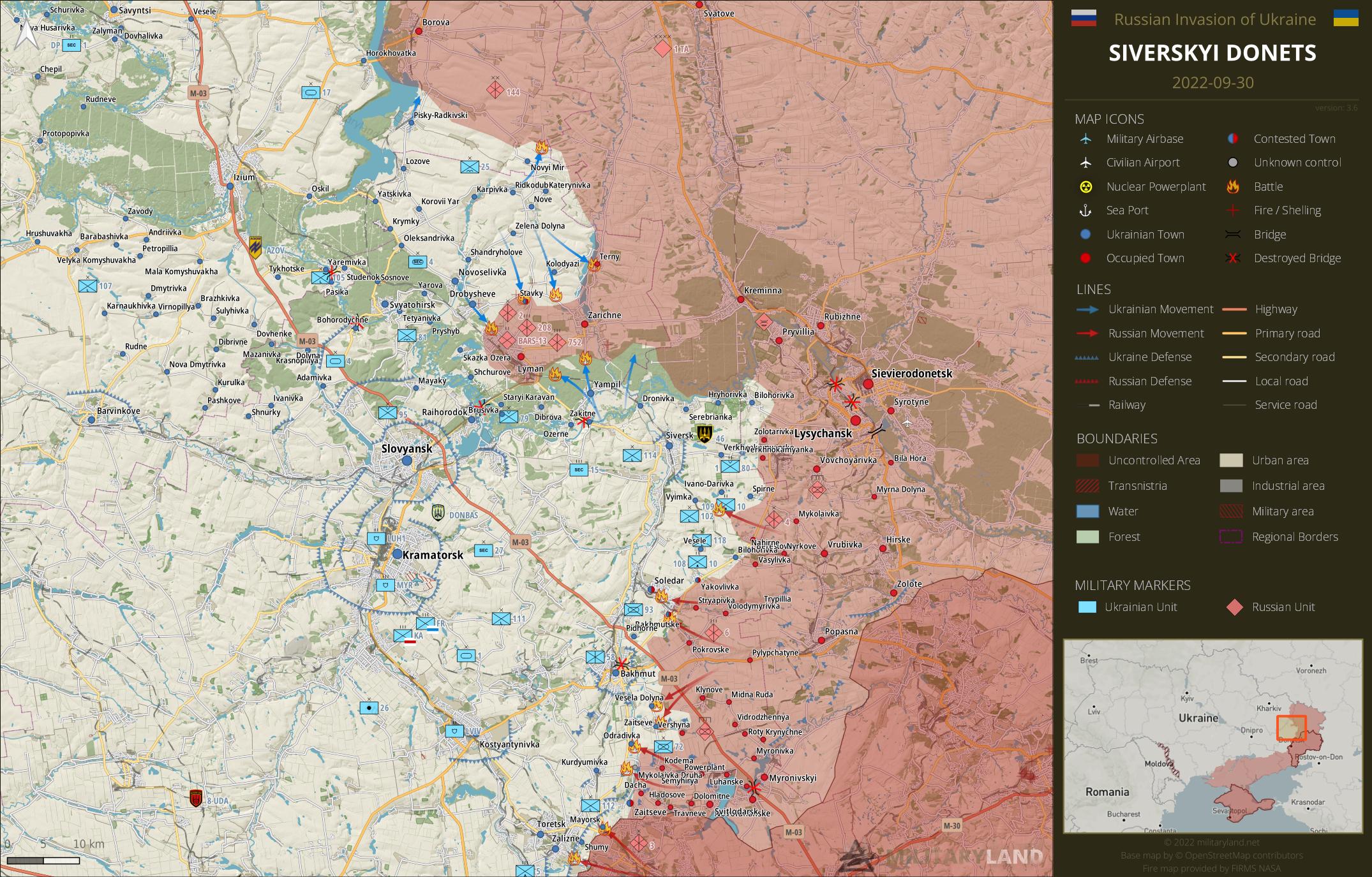 it is now known that lyman was abandoned and RF retreated..

But is anything known about POWs? news media (and UKR) told that 5k troops where encircled, but that’s just not possible, cuz with 5k RF, ukraine never would’ve gotten so far if they themselfes only had 6k, also with russian manpower shortage 5k wouldn’t be plausible.

A counterattack attack from kremina open the road to let the encircled troop flee. Probably not lots of pow.

seeing what happens to russians in captivity. in the name of humanity that is no luck for anyone not a psychopath. The reports of the encirclement were likely exaggerated, the claims were mostly “in fire range” the road was never lost according to ru troops posting on telegrams. there was a piece of information that suggested the 1 tank army was send to sweep the small zerg groups breakthrough.

Even if the soldiers got out, I’d be happy to learn that they left a whole bunch of equipment behind. Though, unlike in Izium, the Russians had plenty of warning here… so presumably had time to get much of their stuff out.

Zarichne was a massacre for russian retreat. Bodies, bodies and more bodies.

Thanks putin for that.

It would be great to get enough pows to exchange for the mariupol guys. Unimagable what those soldiers had to go through.

other than captivity and their time in azov not much, they themselves could have surrendered sooner if they wished and with it the civilians they wouldnt let go. now the media pretends that their state comes from russian treatment standard (which is Genève) instead of their time in the catacombs of azov. conscript pow are kept in center parks style colonies, im sure the food isnt tasty tho.

The defenders of Mariupol surrendered around May 20. If they had been treated decently in captivity, they would today, after 4 months, have healed their wounds and all the hardships of the defensive fighting would no longer be apparent.

84 anniversary of Monachium. Such a timing uncle Volodia.
But this time there will be no ‘peace for our times’.

Today music and cheers came from the Moscow’s red square like a victory day… meanwhile in Ukraine the RF just get closer of a big deafet…
…I thought about stories from Titanic. You know, the one about musicians playing, people dancing while the boat was sinking…

Yeah, but the people on the Titanic knew they were doomed.

they kinda knows. Part of them anyway.

The last ones were not playing dance music https://youtu.be/mCEfqj9pDAI .

Thanks for your extrawork
glory to Ukraine

Glory to the heros