The map didn’t change much today. The situation on the ground remains stable. Russian forces didn’t advance further, and all attacks had been repelled by Ukrainian forces. 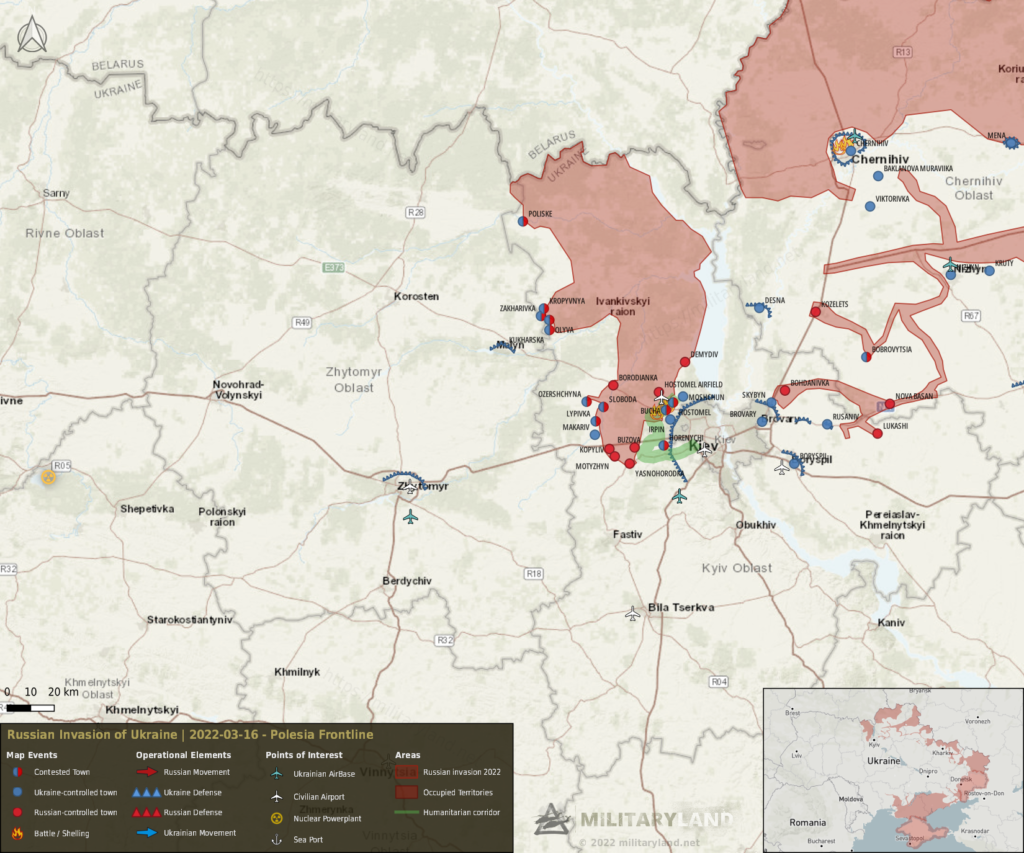 According to Ukrainian Army, Russian forces are preparing to storm and capture Vyshorod and the Kyiv Hydroelectric Power plant nearby. The enemy forces attempted to gain new grounds on the western bank of Dnieper towards Kyiv, but they weren’t successful. On the eastern bank, Russian Army amass troops in the area of Bohdanivka.

Enemy UAVs were spotted flying over the region, but there was no change on the ground. 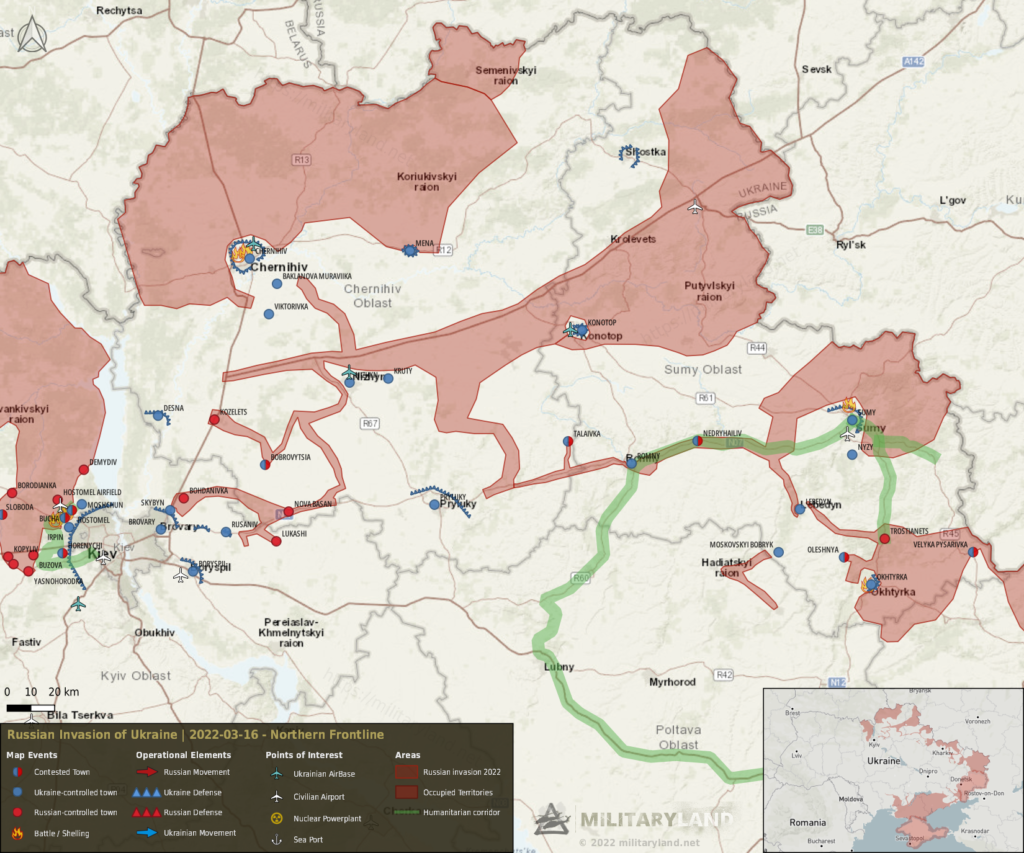 Enemy forces paused all offensive operations in the area and focus on establishing supply routes for forwarded units and regrouping its forces in the rear. Sumy, Lebedyn and Okhtyrka remains besieged. 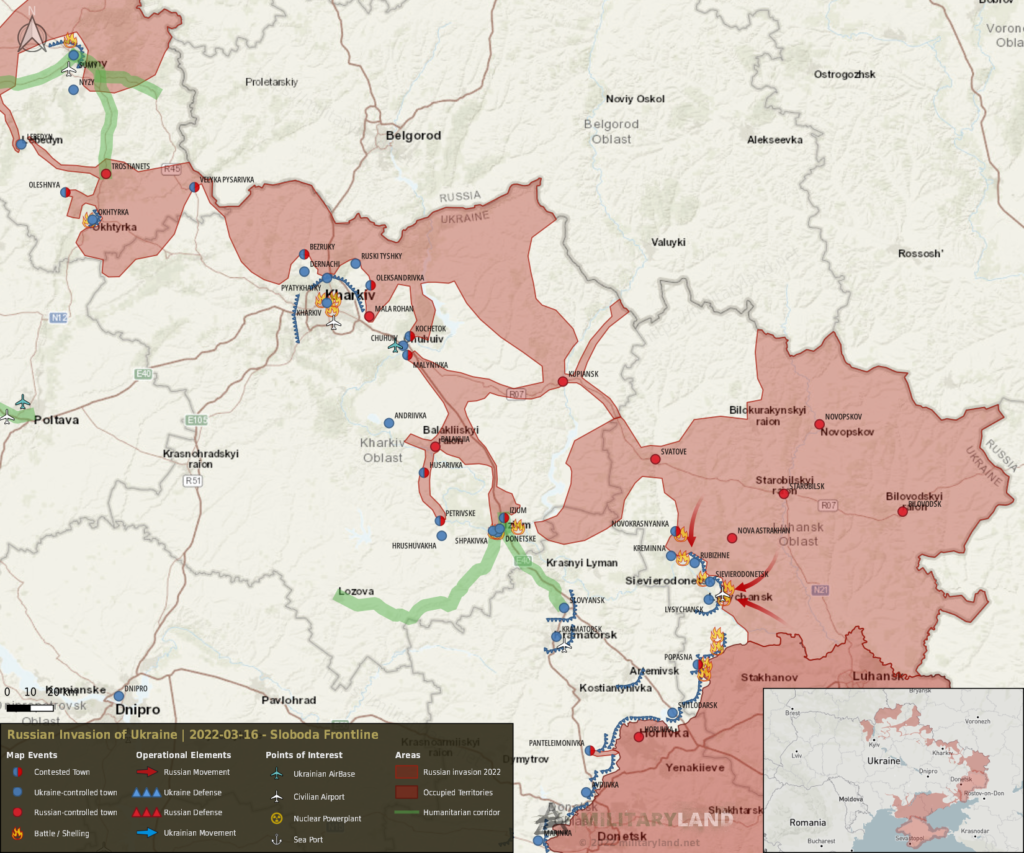 The enemy had no success in conducting offensive operations to encircle Kharkiv from the east. All attacks were repulsed.

Russian troops entered the outskirts of Rubizhne. The enemy made another attempt to enter the city of Popasna, but the attack was repelled by Ukrainian troops stationed in the city. 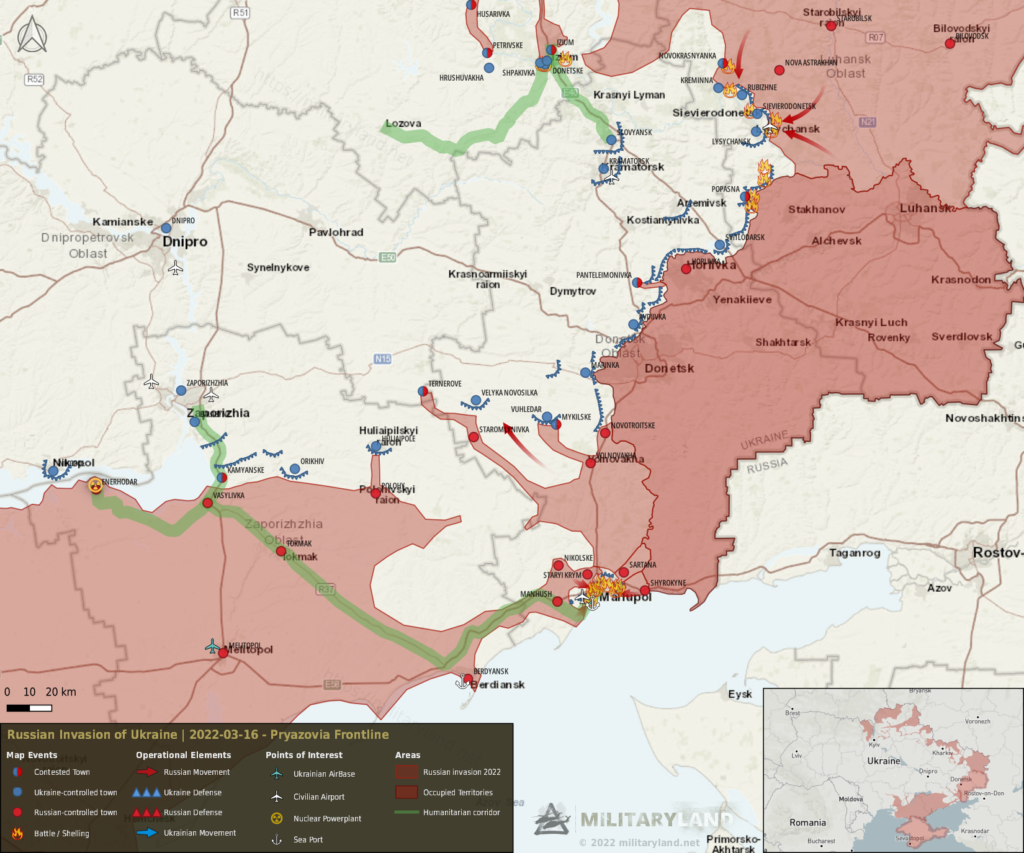 No changes in the area. 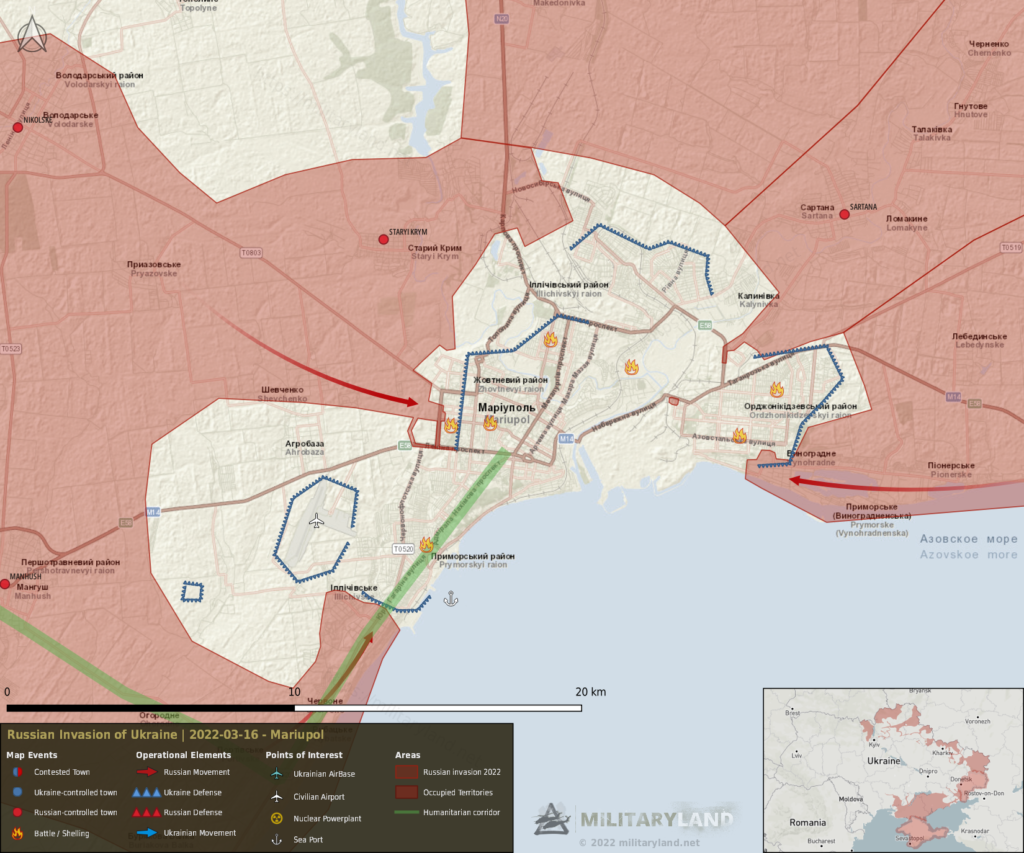 Russian forces struggle to advance deeper into the city in the western part of Mariupol. Situation in the eastern part of the city is currently unclear.

I zoomed the map a bit more to see the details of the city. 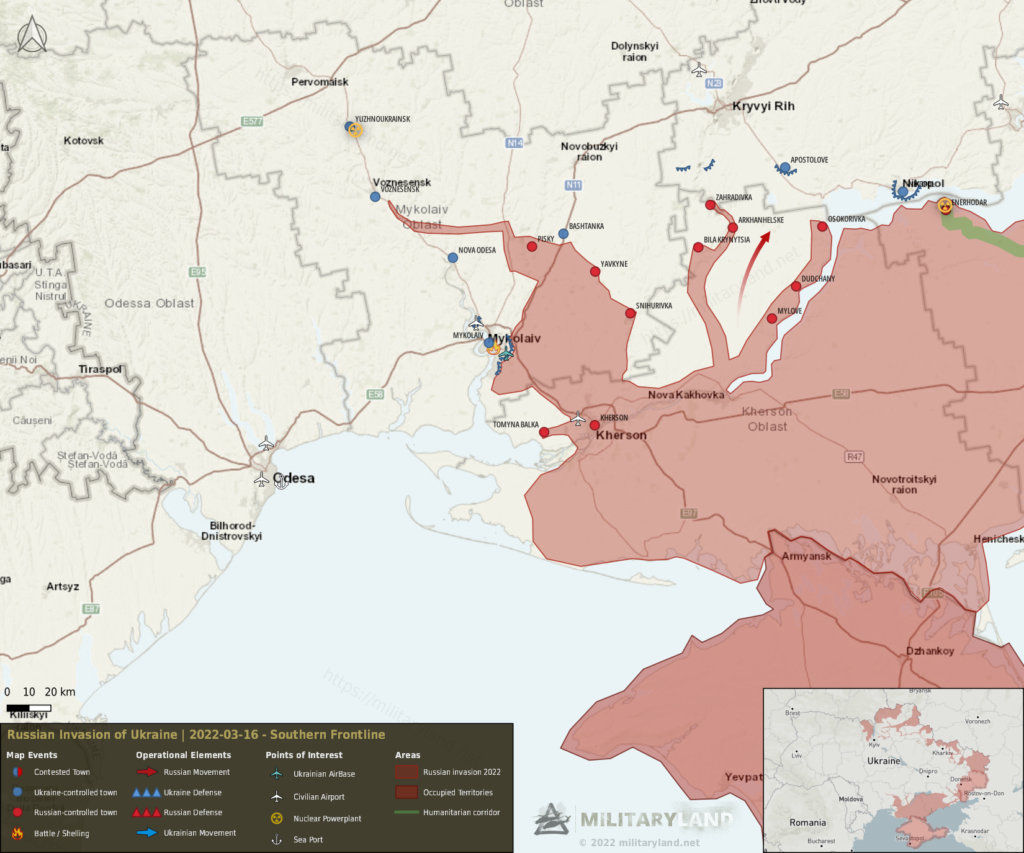 Kherson Region remains mostly under Russian control and there were no changes today. 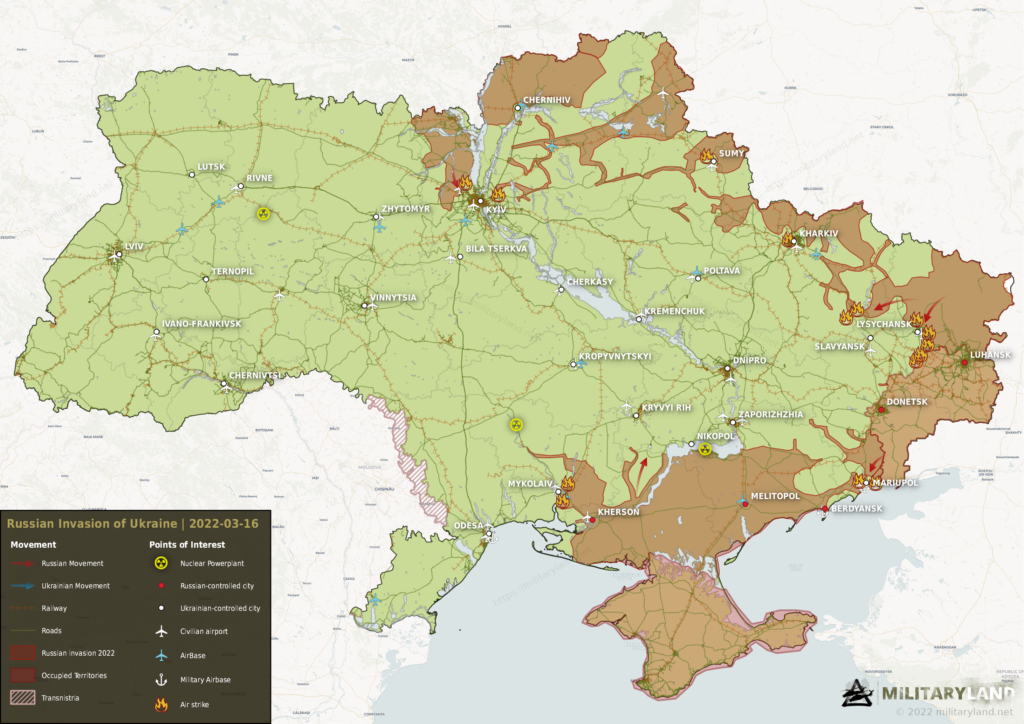 Hello, thanks for putting these maps together, they are fantastic. I have one request. Would you be able to show change in land taken in a different colour? For example, territory that Russia takes in the past 24hrs could be orange, and land that Ukraine retakes could be blue? This would make it a lot easier to see what has changed.

Hi! this war will be decided on the south front. after conquering the corridor to the Crimea, russian orks will be negotiate peace.

We have only one side information now. Be related with something from Russia means support to world evil. Be Russian means unhuman. Anybody remember description of rasizm?

I read statements from both sides and if Russian side provides a visual proof, I include it.

Lot of Russian visual information exists. Videos from drones, videos from Donetsk forces.
I live in nearest city to Ukraine border. So many refugees from Mariupol arrived today and yersterday.
Let’s try to search in internet what they say about Azov battalion. And why they want to get in to Russia

Thank you for putting in the effort to collect all this information and sharing via this blog!! Hard to get a comprehensive view of the current state of affairs and the strategic momentum…

I feel that it is getting more and more difficult to extract meaningful information from official statements. Instead, we might need to use social media postings to get at least some idea of what is going on. https://focus.ua/voennye-novosti/509510-artilleriya-93-y-brigady-unichtozhila-divizion-sau-msta-s-na-sumshchine-video shows the Ukrainian destruction of Russian troops in Trostianets near Sumy (the city layout displayed in the video corresponds to the Google map). I am not certain that after an attack of that size, Trostianets is still… Read more »

One sided information? Does the Russian MOD not release anything?

This site has the best maps. understandingwar.org has a nice write-up every day on the actions of Russia(and sometimes Ukraine), but most of this war is shrouded in mystery.

Not one-sided. If Russian side release a proof they captured a town/city, I add it and write about it. However, I have to take all Russian MOD posts with a grain of salt. It’s been proved many times they’ve released false information.