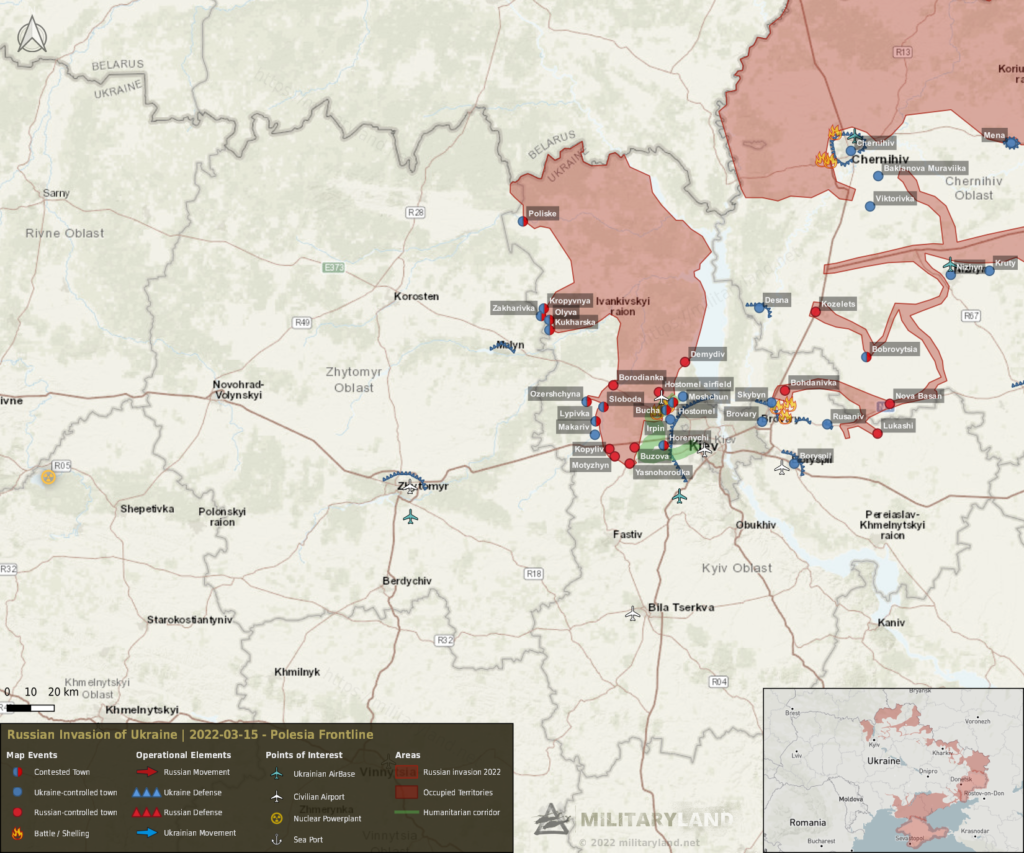 On the left bank of Dnieper, Russian forces reached the Ukrainian defense line Kropyvnya, Zakharivka, Olyva, Kukharska and also the town of Poliske in the north. Ukrainian staff also reports heavy battles in the vicinity of Irpin and Bucha at the momement of writing this summary.

The enemy attempted to capture Makariv, but Ukrainian forces repelled the attack. The towns near Makariv, namely Ozershchyna, Lypivka, Sloboda remains contested, and neither side has full control over them.

On the right bank, Russian forces reached Lukashi and there is at least one roaming element near the highway M-03.

Ukrainian side warns of possible provocations by Belarusian military alongside the border. 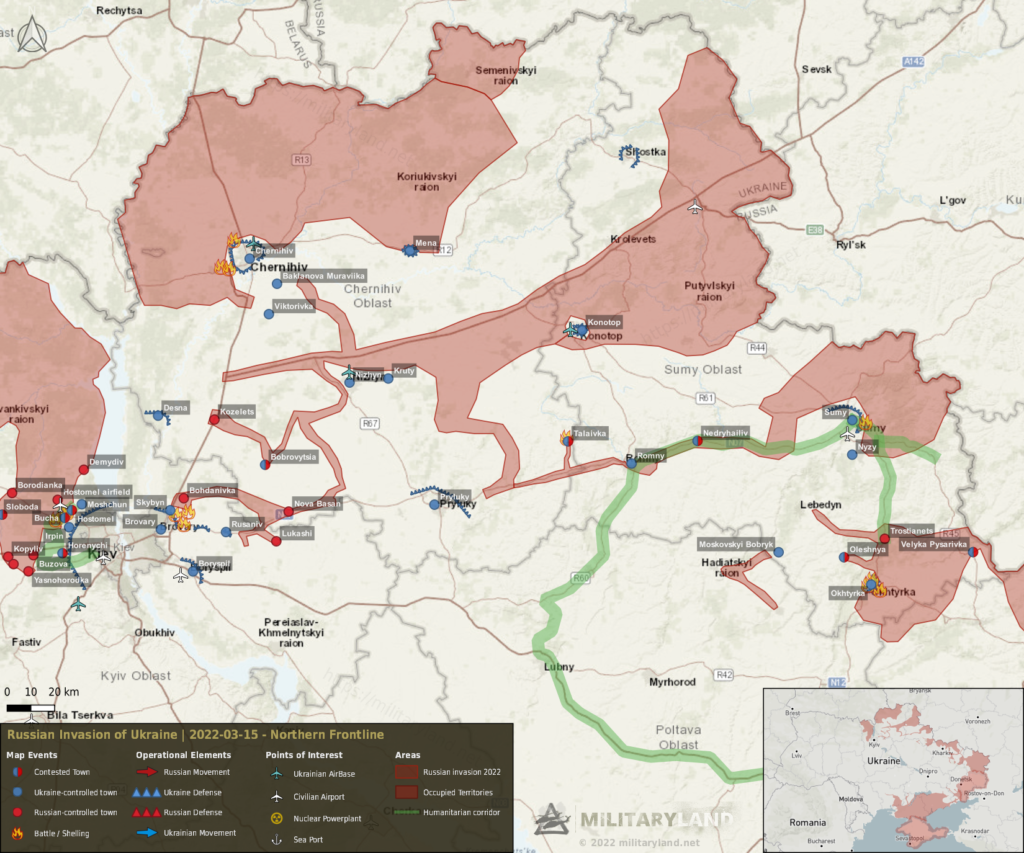 No signification changes have been reported from this area.

Ukrainian Territorial Defense units are conducting defensive operations in Talaivka, Nedryhailiv and Oleshnya. Russian forces tried to enter the Sumy outskirts during the night, but the Ukrainian defense repelled the attack.

Very interesting is the mention of Velyka Pysarivka. According to Ukraine, it’s a contested city at this moment. If you remember the Ukrainian counter-attack west of Kharkiv that we had no idea how it ended, this is most likely the result. 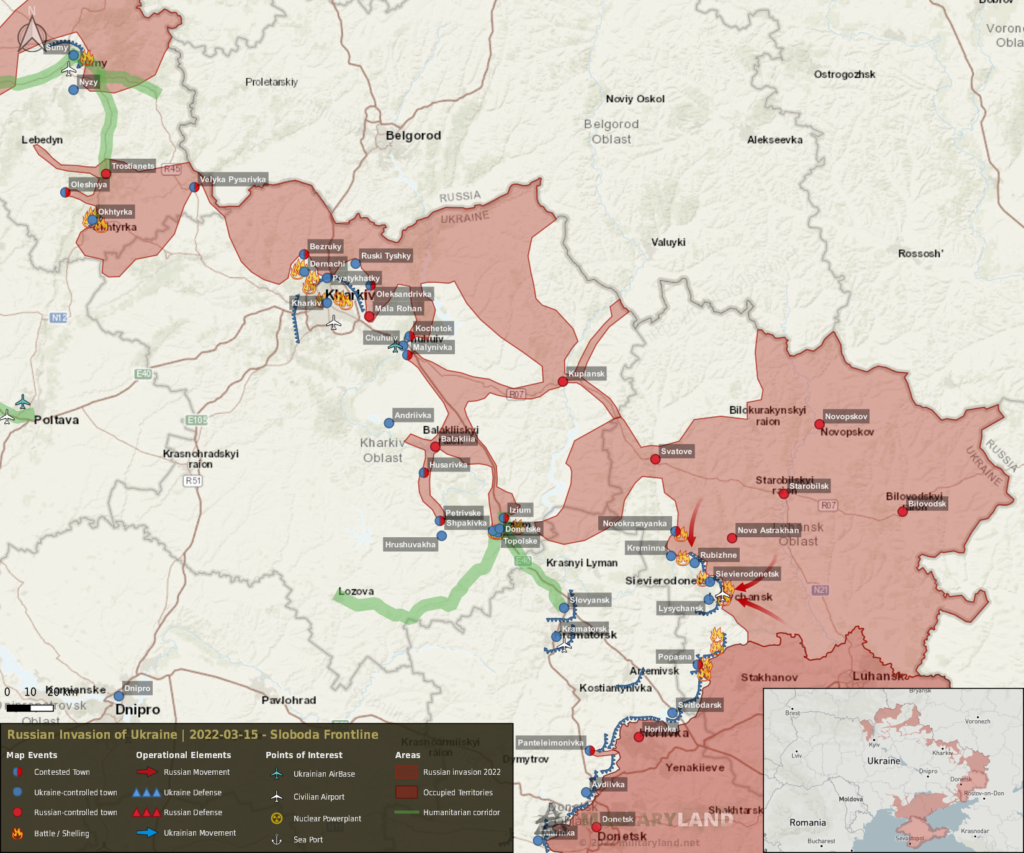 Ukrainian forces pushed enemy out of immediate outskirts of Kharkiv. Pyatykhatky and Ruski Tyshky is under Ukrainian control and there are clashes in Bezruky and Oleksandrivka. Russian forces maintain position around Chuhuiv, namely in Kochetok and Mylinivka.

Ukrainian troops continue to defend the southern part of Izium, Russia controls the northern part. All bridges in the town are destroyed, which limits Russian movement across the river. 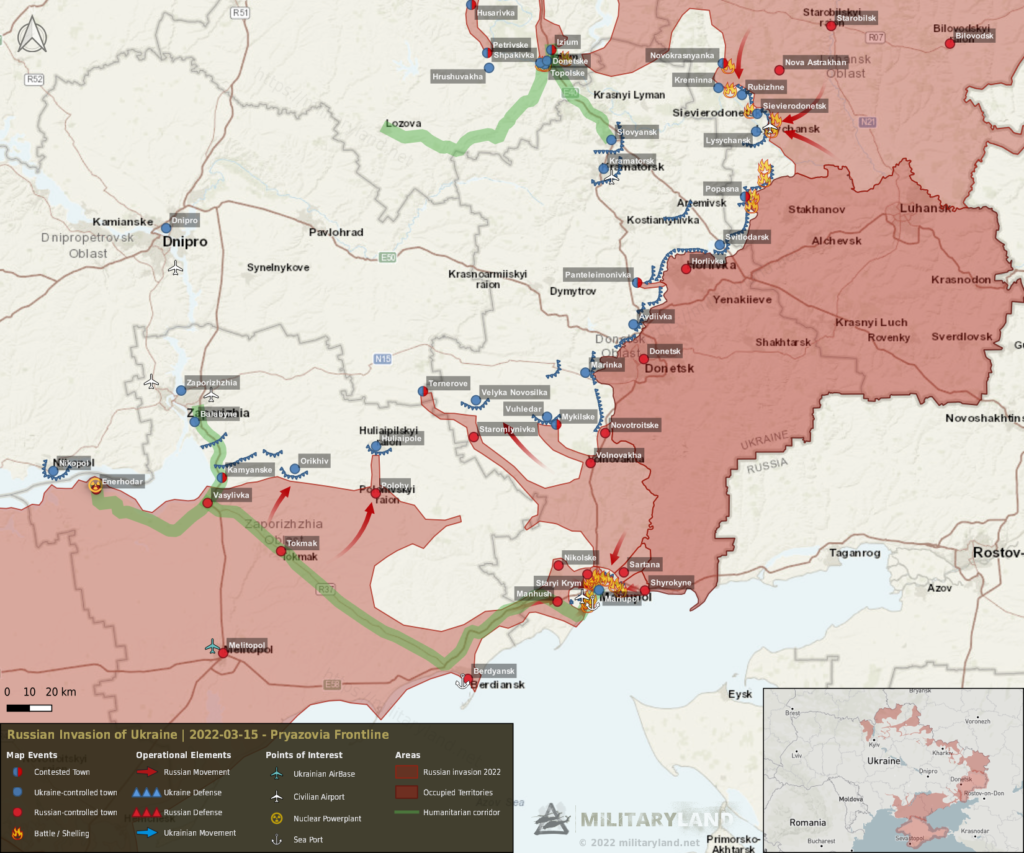 In the south, Russian army reached Vuhledar and Ternerove. Ukrainian forces repulsed all attacks on Vuhledar, but nearby Mykilske remains contested. The situation in Ternerove is unclear, but the attempted maneuver threatens Ukrainian forces stationed at Huliaipole nevertheless.

Russian forces approached Kamyanske, but because a humanitarian corridor leads through here, no significant clashes have been reported. 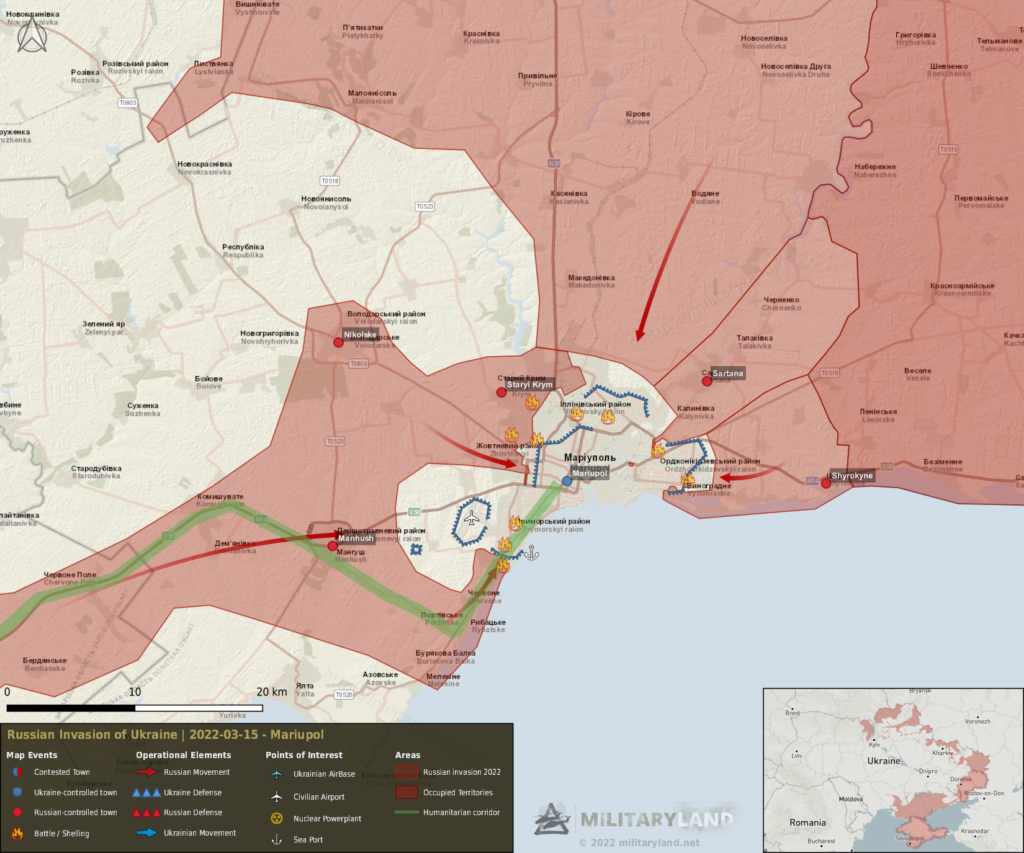 Russian forces entered the city and captured a hospital. The enemy reportedly has taken the doctors and patients as hostages and was firing towards Ukrainian positions from the hospital. In the east, Russian troops pushed alongside the sea and forwarded element reached the river of Kalmius. 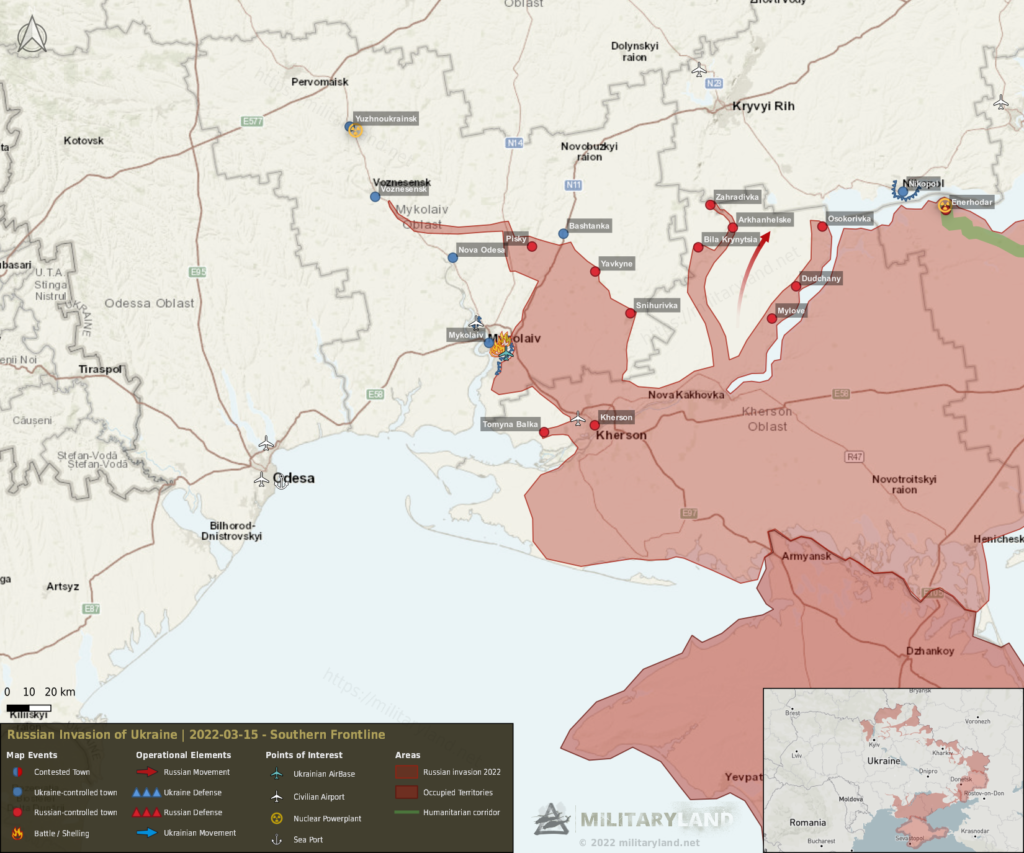 The Russian attack on Mykolaiv hasn’t been successful so far. Instead, Ukrainian forces launched a counter-attack towards Kherson. We are waiting on the results. 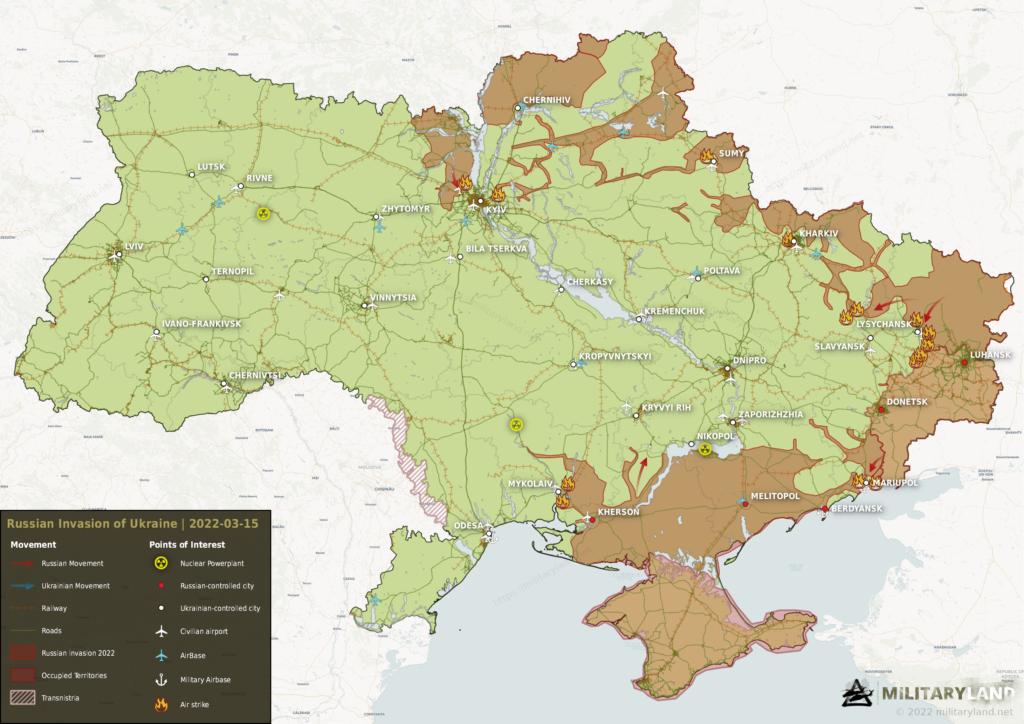 Yeah this confused me for a moment while I was reading this summary.

The left bank of a river is the side that is to your left if you are in the river, swimming downstream. And likewise for the right bank, of course.

True but 95% of people reading won’t read it like that. They will read it as it appears on every map in existence: left bank = West bank.

Possibly, which is why Jerome is probably right that east/west are better terms than left/right in this case.

Dear Jerome,
the western bank of Dnieper is its right bank, not its left bank, since it runs down to the south to the black sea.
Kind regards.

Good point, thanks for noticing it. I think it’ll be better to call it western/eastern bank instead.

Thanks for your work!

Is the bridge over the Bereka river on road T2115 still standing, just north of Hrushuvakha, Kharkiv oblast? The Russian forces at Petrivske very likely intend to cross there in order to attack Izium from the south, take it, build a bridge over the river, and push towards Slovyansk-Kramatorsk from the north-west (there’s basically nothing between Izium and Slovyansk). The push at Panteleimonivka is probably also intended to lead to an offensive on Sloyvansk-Kramatorsk, but… Read more »