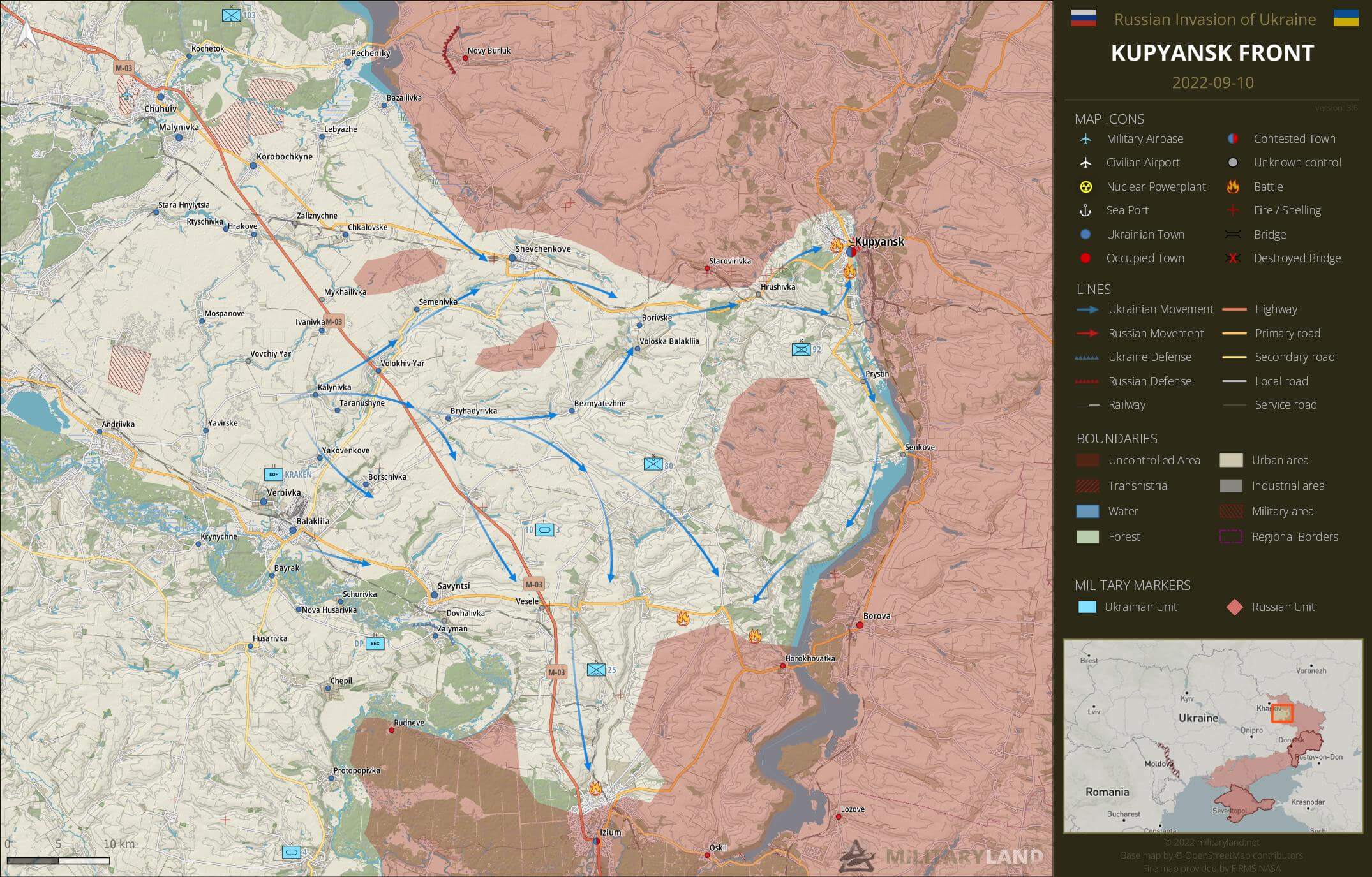 Lots of prisoners taken. Ukraine will need them to trade for kidnapped civilians.

loss for words how awesome the Ukrainian army and western weapons. pure guts , tactics , smart you guys are just plain awesome nothing but respect. Thank you for what you are doing!! God bless the fallen and TY to the hero’s. Slava Ukraini

Ladies and gentlemen, the Kharkiv front is no more

Dvorichna photo verified to be under Ukrainian control, 20km NNNE (or 23.7km by road).

This is important because the Russians have defenses in eastern Kupyansk and Ukraine blew the bridge, there’s a river blocking most of the land north of Kupyansk and the Dvorichansky National Park northeast of it with only one road crossing the park (bad route most likely).

Ukraine needs to move east from Dvorichna before lines solidify, so that eastern Kupyansk can be flanked from the north and the Oskil river cleared, and the front to northwestern Luhansk opened.

PS. Russian military having officially left Kharkiv west of Oskil does not mean troops that have been abandoned have all been cleared up
+ empty settlements have to be demined and otherwise cleared, empty settlement after settlement is falling every hour, we’re in a situation of the Russians retreating and routing from West of Oskil faster than clearable

They’ve retreated in order from their more northerly positions and routed from the more southerly and eastern ones where possible to flee.
Abandoned troops refer to the soldiers that are now behind enemy lines that the Kremlin does not recognize as there because that’d be embarrassing.
Ukrainian units are struggling with the number of POWs, unclear numbers but likely in lower 4 digits.

I saw one report that they took 7000 prisoners and that was just in Izium.

They probably doesnt do a lot of prisoners in izium. May be south of izium. But 7000?

Without more proof, i count in hundred, not in thousand.

By the Russian MoD

Hopefully soon Belgorod will be taken. Russia is a state of pensioners, it is not the USSR in 1940s or the Russian Empire in 1910s. It is an unstable mess likely to balkanize.
There is absolutely no reason to not push as deep as possible into Russia, rapprochement after the 2014 borders are restored would amount to treason at this point. Drang nach osten!

One reason: us and ue will not support this kind of action.

Perhaps not. But Poland, Estonia, Lithuania and Latvia are potentially open to the idea.
USA-Canada maybe won’t mind too much because they don’t want Germany to remain dependent on Russian energy inputs for the rest of the century and become its satellite. If the energy infrastructure remains uninterrupted, you could end up seeing a scenario where Europe is partitioned between France and Russia.

Poland authories are talking a lot. But if they support this kind of initiative, they will lose support of us-ue . words cost nothing.

More importantly: why would Ukraine want to conquer Russia? After this war is over, they’ll have to rebuild half their country. You think they want to also take on the responsibility for rebuilding Kursk, Voronezh and Rostov?

Why would we need to rebuild Russia? We can simply live off the land as we move eastwards as did our ancestors Sviatoslav I. The proposition isn’t one of economics, but of putting an end to the 700 years of madness. Securing the entire wheat belt to Baikal lake and anchoring ourselves behind the Lena river in the east should be our priority.

Belgorod isn’t worth even one Ukrainian soldiers life. Neutralize the threat. You are most likely correct. USA and EU cannot support an expansion of borders.

Surprising how much intact equipment the Russians are abandoning. If they couldn’t take it with them, at least they could have burned it. Do their soldiers really not give a shit anymore?

Lack of officer to ordon that and they flee in panic, not retreat like kiev or lysyshansk.

Whats happen in lyman area is very important. If ukr confirm the bridgehead here (taking zarichne and made the link with izium), oskyl defense line will be difficult to hold for russian.

Whole lot of pro-russian OSINTs confirmed that Ukraine flag is up in Izium and Lyman. Hope I can see that update in your map soon enough. Thanks for your maps tho. Loving it since invasion day 20

It’s been up for about 17+ hours before your post. Russians are now retreating from most of the remainder of their Kharkiv Oblast holdings. They’re still holding on to some parts but Russian military maps only show units east of the Oskil river.

14 May, Ukraine’s Military Intelligence Chief, Major General Kyrlo Bundanov said, “ Russia will be defeated by the end of the year……Mid-August will be a major turning point in the war…..Ukraine will recapture lost territories in the Donbas and Crimea.” Ukraine and its supporters have a plan. The Russians are now getting the one thing they truly understand, Brute Force.

Yeah that guy is highly accurate, also predicted the time Russia would attack.

Retaking Crimea will be tough without a navy. But at this point, nothing should surprise me.

Wait and see , but if one day ukr are on the door of crimea, its means ru have nobody to defend crimea.

The harder things is to go to the doors of crimea

Thanks to the redeployment of Russian troops from the Izyum direction, it was possible to save up to a third of the personnel and even part of the equipment

Didn’t they redeploy most of them to the Kherson region? If so, those troops are pretty much cut off also with all of the bridges cut. They may have only delayed the loss.

The Russian MoD sure lives in its own world with their terminology. That was a rout, not a redeployment. They’re now pulling out of most of their remaining holdings in Kharkiv region. It’s a general retreat. Of course they’re STILL sending troops to the Donbas meat grinder and Kherson because why not.

It’s a beautiful day when we’re so far in their rear Kadyrovites are being captured. 7,000 PoW

The reason they’re giving is that they decided to focus on Donbas lol, they’re still focused on projecting strength over actually creating it. Changing words sure is dangerous when you try to live up to it.

so another two thirds of men and combat vehicles are lost?

Lol this map is terribly out of date, but nice attempt.

There’s one very good source on Twitter in particular, but he publishes things within hours instead of waiting 36 hours so I’m not going to identify him.

Or perhaps it’s not such a timely attempt, it’s generally 24-36 hours behind here. I mean forget about the reliable and early Twitter source, this daily special report is behind Ukraine Live Map which has been very impressive today and is marking unconfirmed reports within the last 12-24 hours.

The map is based on primarily on confirmed and verified news, not on rumors and false announcements just to hunt some likes on Twitter. If you don’t like it, that’s fine.

Ukraine Live Map can generally be considered to be confirmed, and there’s tons of videos showing the Russians retreating across most of the rest of Kharkiv region.

Tho perhaps the max characters helped chase away Russian trolls.

https://liveuamap.com/ is highly accurate these days on the Kharkiv front, within 12 hours (but days behind in Kherson and Zaphorizhzhia due information blackout).

There are plenty of geolocated pictures and videos that don’t make it into these daily reports, the Ukrainian flag was raised in Izyum yesterday.

Do your own website if you are not happy.

When you go to mc Donald are you explaining to the owner that you prefer pizza ?

Yes, but claiming a liberation of a village without proper evidence (photo, video etc) is really hard to trust these days.

LiveUAMap had Oleksandrivka marked wrongly for months, for example.

Tbf the most important stuff here is only 24-36hrs behind, and the Ukrainian MoD wants a 36h delay, so that’s good.
The best source (look for a soldier thumbnail, don’t link) Twitter is 90% accurate, mostly using soldier sources. While highly accurate his actions are questionable, his offensive actions in the information space may be outweighed by uninformed Russian soldiers gaining information

All are good source. Come on rybar/warmonitor to dream. Come here to put your feet on the ground (not sure if the expression exist in globish)

this is the correct way man .

This in today: Russian military maps published only show units east of the Oskil river in Kharkiv region.