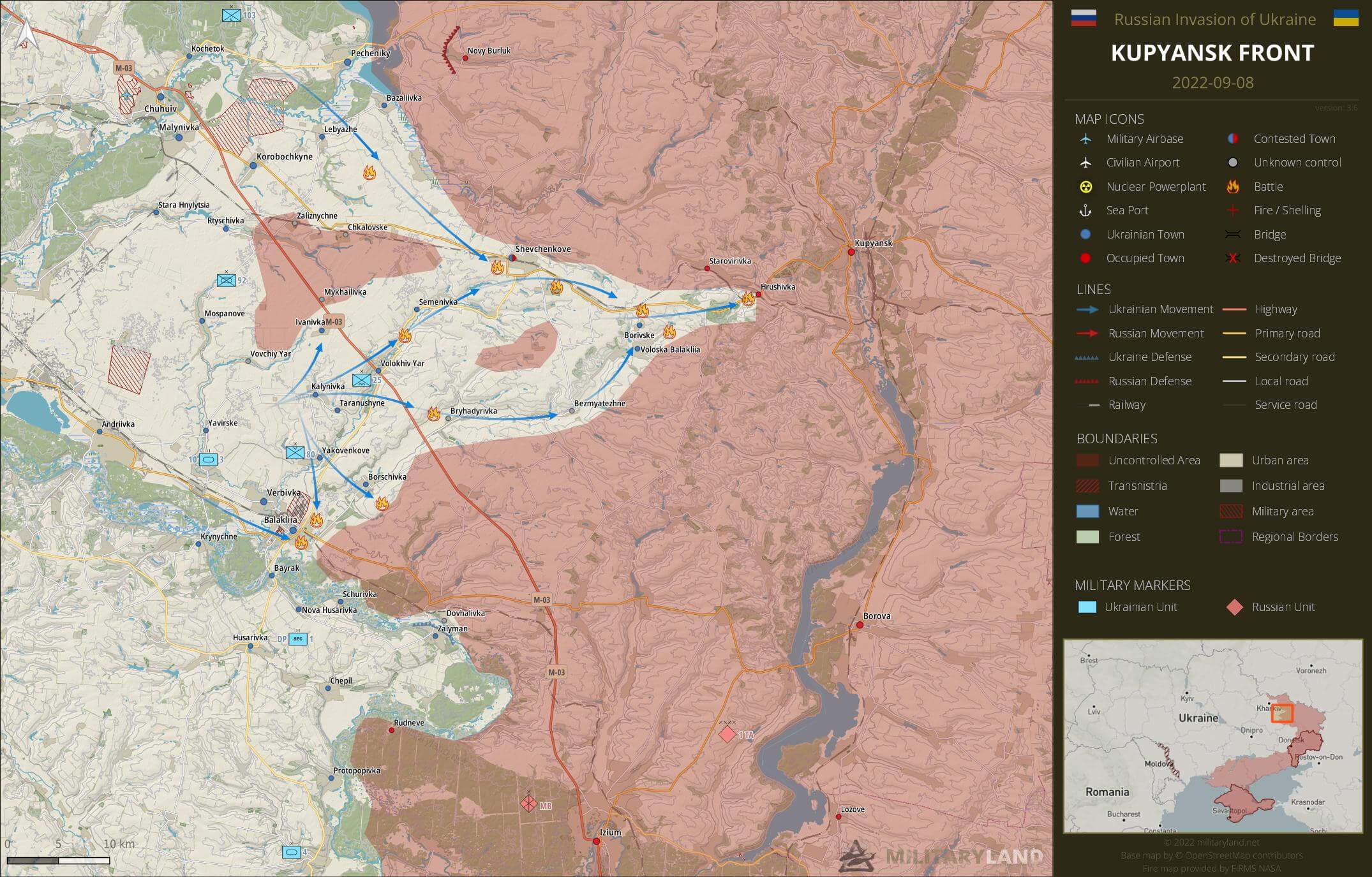 Ukrainian forces are currently marching towards Kupyansk and Izium with minimum resistance. Russian troops were caught off guard and won’t be able to stabilize the frontline without reinforcements. The goal of the Ukrainian offensive is clear: Kupyansk, the major railway junction in the area.

I am very happy,hope they can kick em out of Ukraine.lets hope that this was not a trap and they are not preparing an encirclement.both parties are really good at war.

Whoa, what a great move! Nicely exploited the opportunity and created quite a momentum! Hope they don’t get too stretched and risk being cut off – kinda what happened to invaders on their advance on Kiyv. Are sufficient UA forces available in the area to reinforce, supply and hold retaken positions? Or would they have to be relocated from other front sections and risk weakening there?

They are reducing the frontline. So they libeberate troup to hold liberate territory.

This is asymetric situation – Ukr forces comes into non-hostile (if not outright friendly) territory hence, they do not need to put supressing efforts to subdue local population (neither they have to worry about an active resistance) which is constant Ru problem.
Creating a stable line of logistic is always a challenge, but they do not need to worry about ‘Yurii with buddies and theirs NLAWS’

Russian general Andrei Sychevoi was captured somewhere in the North. It’s still unconfirmed, but photos show a guy who looks an awful lot like Andrei, with two stars on his shoulder.

What russian artillery and aviation are doing?

50km deep in their lign by the roads. The sky should be totally russian.

Or ukrain is able to cover this fast attack with mobile AA system? (Not only manpads).

In Ukraine, there is air defense, aviation and superiority due to the destroyed Russian radars, the Russians are corny blind. They move in small mobile groups, aircraft cannot effectively hit them. The Ukrainian military destroyed several combat helicopters and attack aircraft in 3 days.

In this highly changeable environment the russians dont have the means to select and identify the ground targets for aircrafts and the russian AA dont have IFF to an extent that make them enough secure to distinct friendly or enemy aircraft.

thats sound true. Russia aircraft cannot communicate with grounds units to know who is who. Russia Army is just ground and air artillery.

the sky’s never been 100% russian , and now that UA have antiradadiation missiles HARM I suppose the situation is very bad for RU air force or in the best case scenario 50%/50%

because Russians fight against Russians with NATO support. Russia doesn’t fight against poor Iraqis or Vietnamese, that’s why. One time USSR supported Vietnam and first army in the world lost the war in Vietnam.
Ukranians lost 12k soldiers because of their attack, Russian task isn’t taking more territory the task is to destroy Ukranian army, Pyrrhic victory for ukr.

Last edited 2 months ago by WagnerRusich
0
0

So, Ukranians Failed the offensive toward Balakleya
I don’t think they can win this war

Have you looked at where the rivers and bridges are? That direction is a much lower priority. Depending on what bridges are still up and how much progress Ukraine has made (maps I’ve seen are incredibly inconsistant since everything is in flux), Russian defenders may be surrendering soon anyway if supply and retreat are cut off.

The winter is coming,I don’t think Russian can maintain their supply line during the winter .Just like what they did in April.

It feels like Russia will soon have failed to keep Izyum and Kupyansk. Russians said: “We surrounded them, the counteroffensive was stopped miserably and we destroyed 44 HIMARS MLRS” but it’s all, as we call it, šmorn – the Russian government lies (why do you think it’s illegal to say it’s a war there?) and they got tricked and ran out of steam.

We will not stop supporting Ukraine, so good luck

they lies even when they lies

I’ve believed for a long time that once the collapse of the Russian military effort in Ukraine started, it would accelerate a lot faster than most would expect. I think we may well be watching the start of an avalanche that could see this war end before the end of 2022. The Russian army in Ukraine will soon be a spent force.

I dared to hope that for a while in spring, befor it got clear, that ukraine has a big ammunition problem for the sovjet equipment.
That the prospect of a big collapse is back on the table, is glorious. If Kupjansk gets under tight fire control or even blocked, that could very well be the domino stone of no holding back that big collapse. The russians could still stabilize now, we will see.

They will stabilize somewhere of course. Probably behind the river.

But dont dream to lots of russian reserve. It was nobody in this part of the front. Despite the fact it was one of the principal strategic point of the frontline, suppose to be fortify since 5month.

Last edited 2 months ago by dolgan
1
0

Do you mean national guards? If so, they did since the start.

Both. National guard and special unit .

numerous detachment (organised and singular) from Rosgwardia and paramilitaries (SWAT-alike etc.) Rosgwardia is not exactly ‘national guard’ unit – it’s mostly (despite the heavy armament which they in theory can deploy) civilian resistance suppression force – “heavy police” of sort. RF is a heavy militarised country, even their resque units environmental disaster, resque+search etc are.

Kupyansk could be a tough shell to crack if the russia quickly brings in reinforcement by rail from Izium, Lyssytchansk and Belgorod or even Voronej.
It will depends on their level of reserves available for immediate use… which is probably low at this point.

Not to mention any redeployment from izium and lyssytchansk would invite Ukranian attacks in those regions with those forces being depleted under such scenario. Simply Russia through too much into Kherson leaving the other areas at the bare minimum and apparently below the minimum in some

I dont know if we can talk to a “perfect ruse”. Because it was never a secret. They use the stupidity of putin (Because i am sure that russian military undestand that trying to hold kherson with a lack of power is stupid) to force russian army to fight in very bad position at kherson.

But Kherson is nt a false attack. Ukrain really destroying an important part of russian army trap in a killbox.

Daily reports on the active section + bi-daily ones for the rest is a very good compromise, thanks!

I love that you put in the time to make this! Thank you so much! It’s definitely unusual compared to most days that we see movement as big as this, and I almost thought I had to wait another two days to see this update.

interesting. cool to make a map for this!

I’ve heard some rumors that russia might prepare a offensive, they probably do.

do you think ukraine is able to hold there?

and will this offensive hinder other offensives by ukraine, like kherson?

I don’t think that Russia has the ability to conduct offensive operations of any significance any longer. They’re “punched out”.

This is about the 3rd army corps, which I believe has already been diverted to Kherson and Kharkiv. ruZZia has no real reserves in those regions and somebody has to at least try to hold the line.

I have heard that the 3rd army corps is deployed in Zaporozhye, the 1st tank brigade of AFU is also reported here (by MoD), May Zaporozhye will become a new conflict field

I saw lots of captured troops with new uniforms. You could see the starch in them.

It now all depends on Russian 3rd Army Corps. It’s that or Russian needs to shift some elements around and potentially weaken the defensive somewhere else.

offensive with which troops ? the famous 3rd army maybe ? they went south though …eheheheh