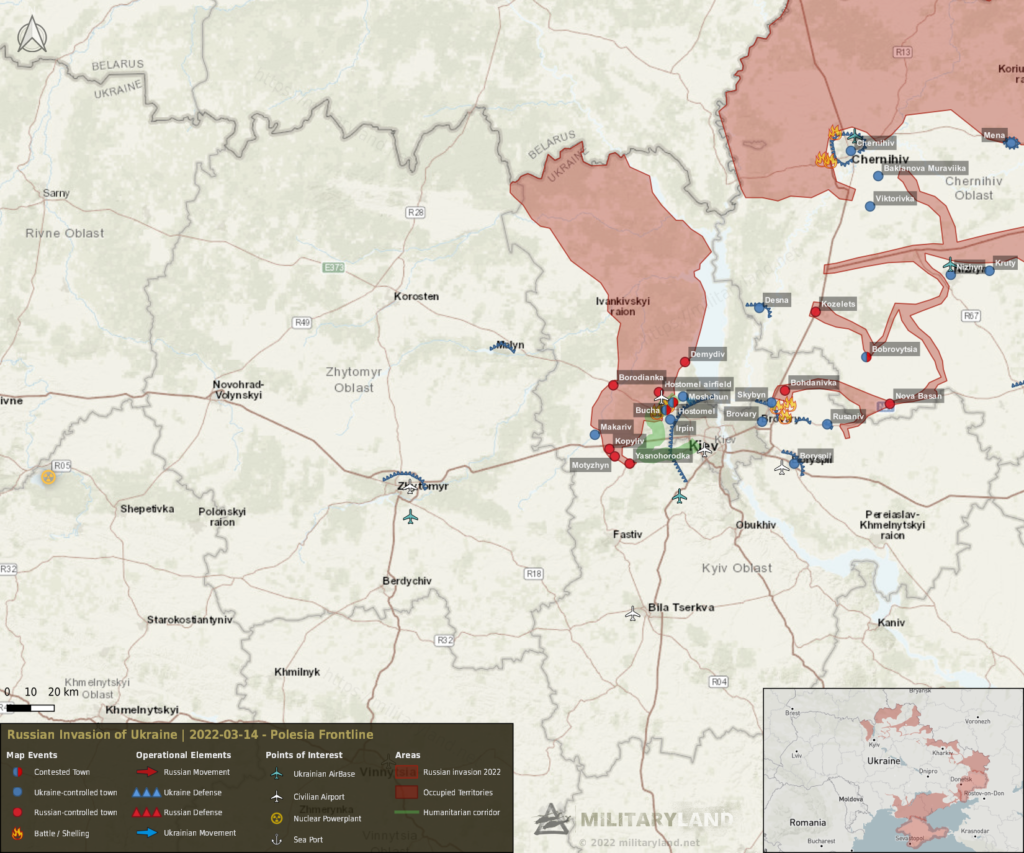 Heavy fighting has been reported near Brovary, but we have no details on the actual situation. In the west, Russian forces continue to regroup.

There’s been no change on the ground in Zhytomyr Oblast. 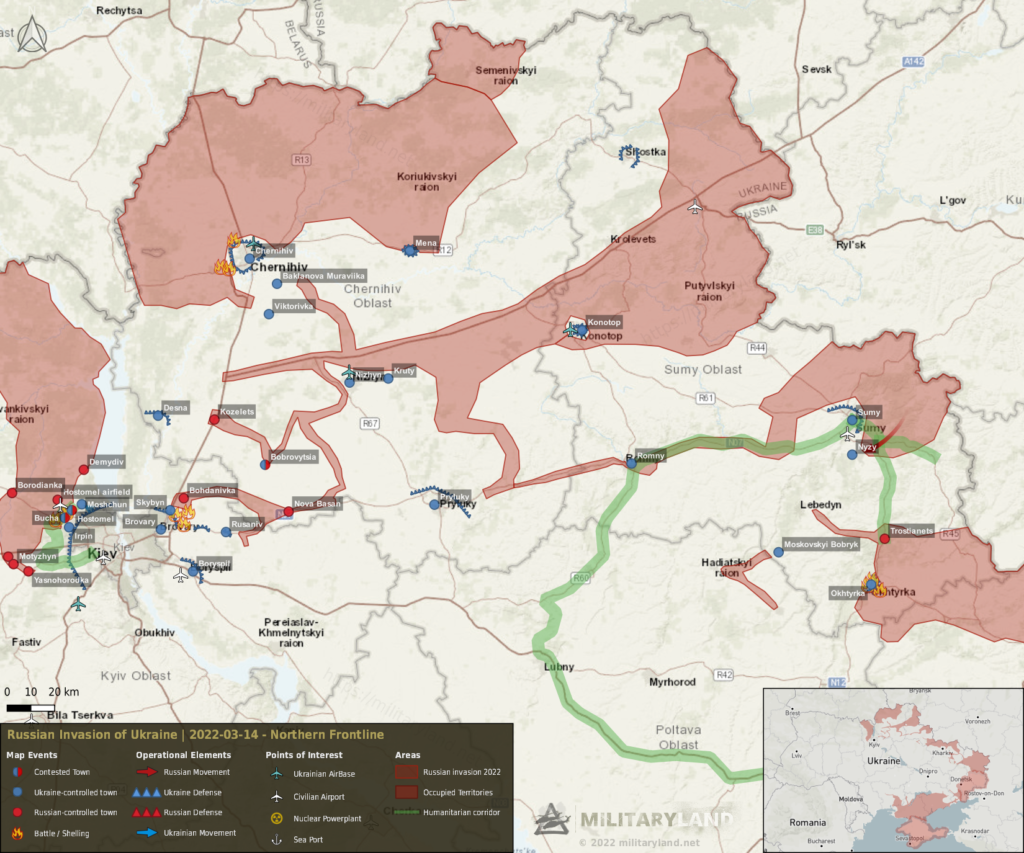 Russian forces shelled the city of Chernihiv overnight, but there’s been no change on the ground. 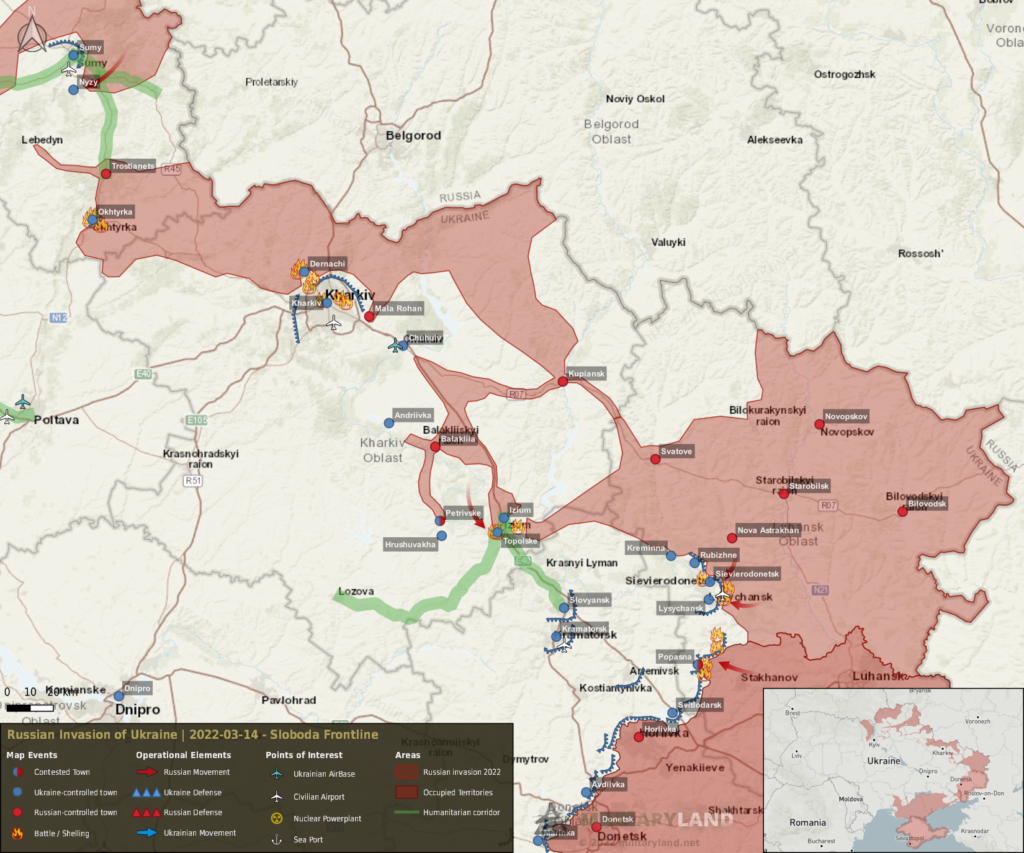 Russian forces crossed a river near Izium and captured Topolske and nearby villages. Ukrainian troops launched a counter-attack in the afternoon and regained control over the villages. Russian army has continued to shell Kharkiv overnight. 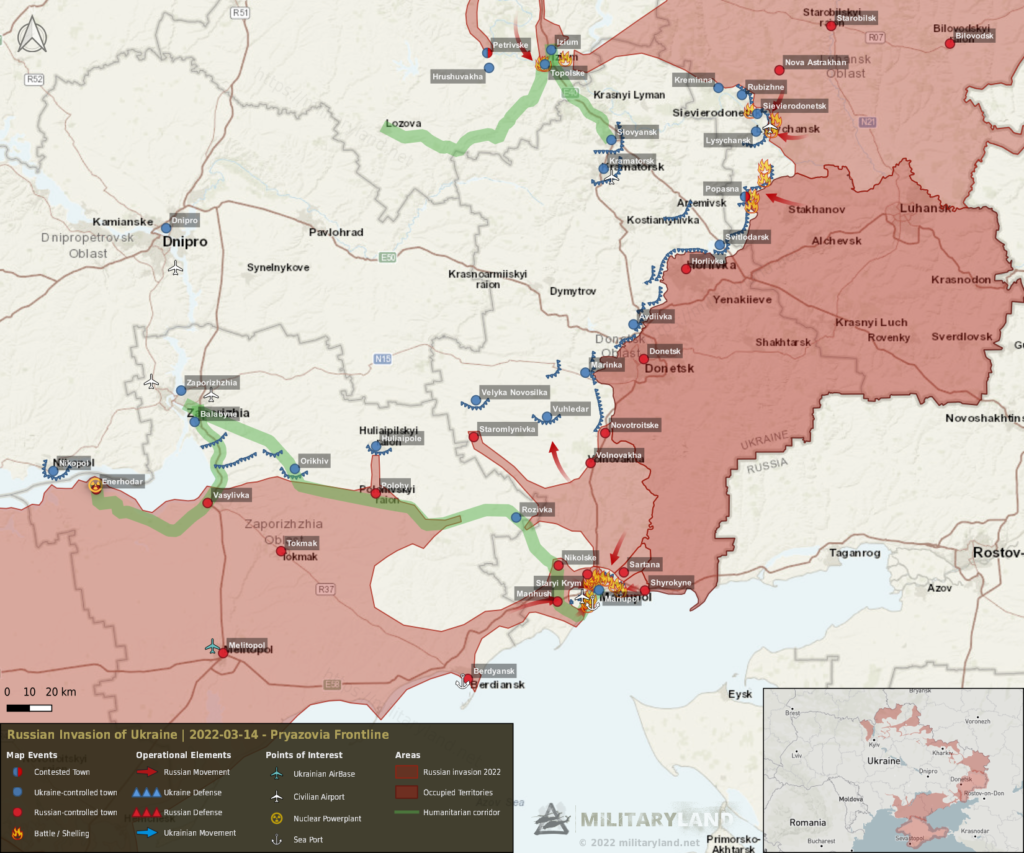 Russian forces shelled the city center and coke-coal plant in Avdiivka, there are civilian casualties. The enemy attempted to break through Ukrainian defenses in the area of Vuhledar. Ukrainian troops successfully repelled the attack and the enemy retreated. 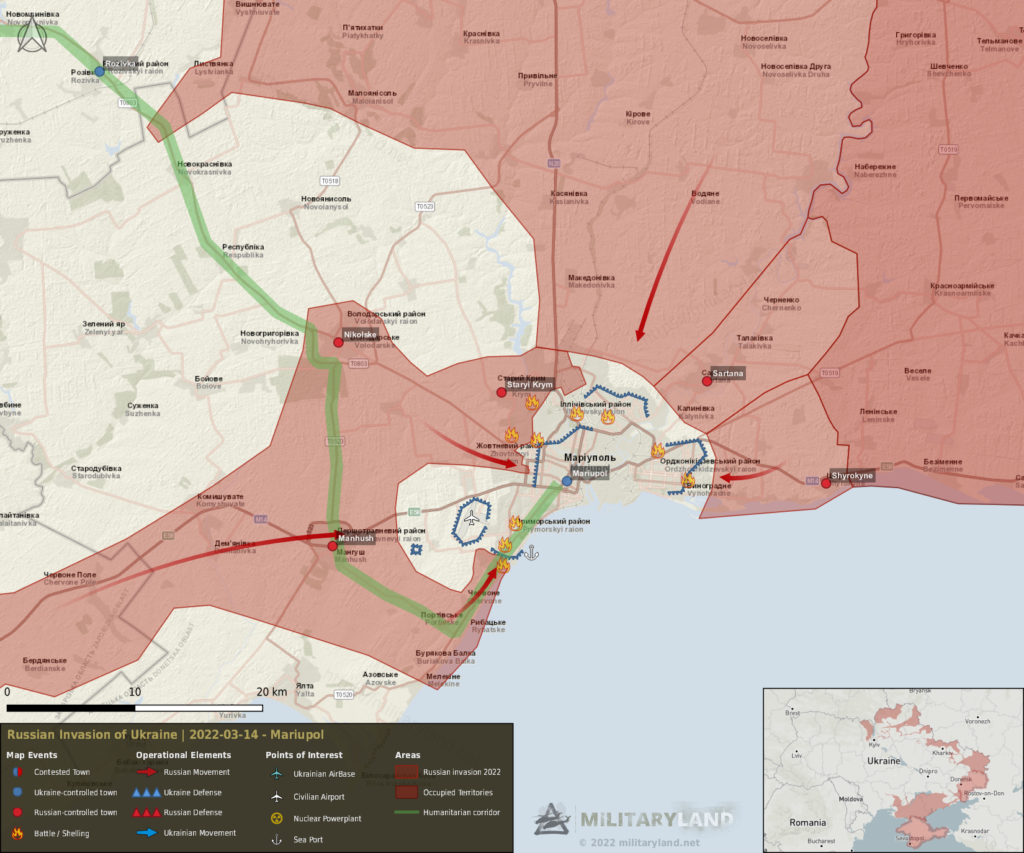 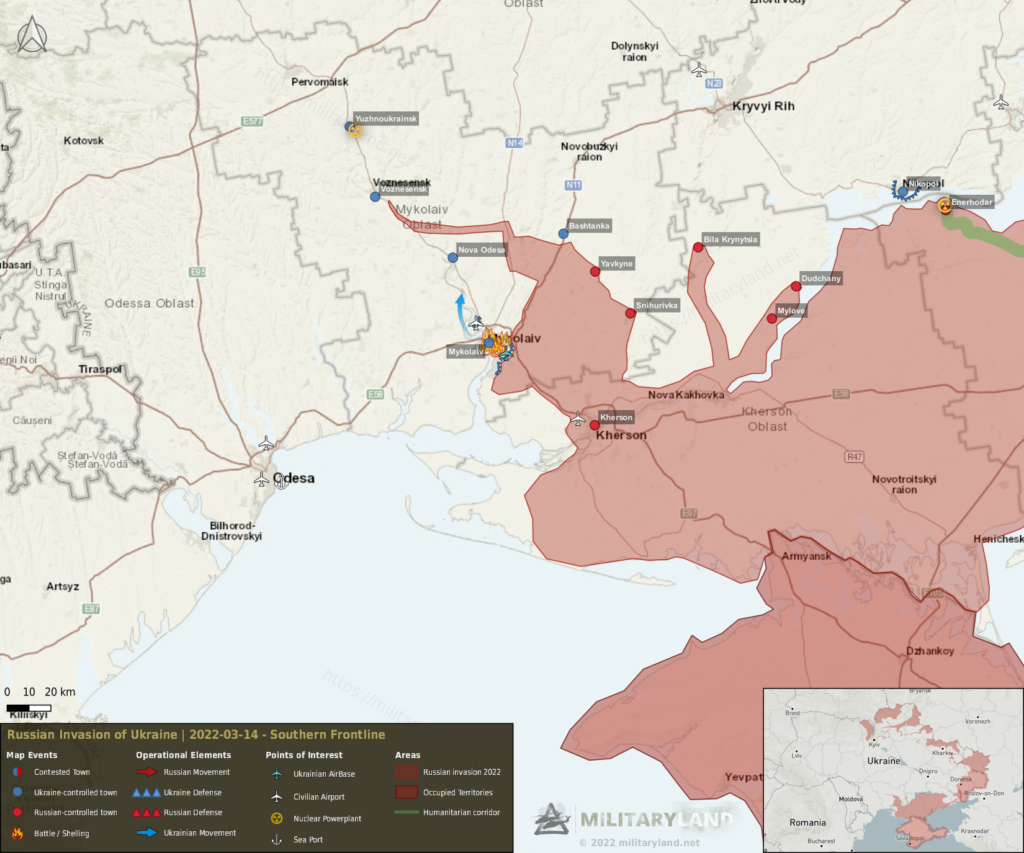 Ukrainian forces swept and secured the road between Mykolaiv and Nova Odesa. Local territorial defense unit set up checkpoints on the road. Civilian evacuation from Mykolaiv to Odesa has started.

All Russian movement towards Kryvyi Rih was reportedly stopped. The enemy is now regrouping. 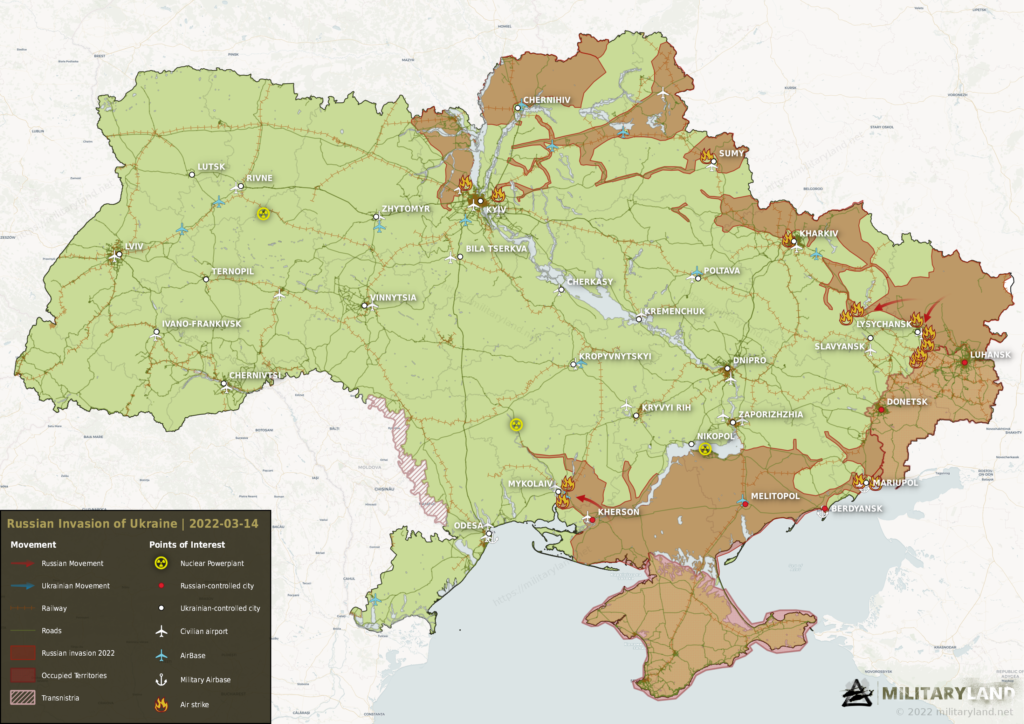 Why you didn’t say about rocket attack to Donetsk city?

Great Job! Let me draw your attention to yesterday’s Ukrainian evening update (you’ve probably already seen it), which includes lots of village names where fighting was going on over the day. These village names suggest a couple of interesting developments: – Pushback of Russian troops west of Chernihiv to almost the state border, i.e. the Dnjepr; – A much more successful counter offensive out of Charkiv to the NW than most (myself included) would have… Read more »

I like the fact that maps while sharing some details aren’t too specific. While it’s important to have an accurate historical account (As this conflict/war like many others will be debated over, used in war crime commissions and studied by strategists for year to come), it’s also important not to give an advantage due to the “realtime” nature of the information thats available. So while it would be nice to have all the bells and… Read more »

Hi Jerome, THanks for this work, its very helpfull and your Twitter stream is great too. I follow several maps with yours, like LiveMap, and even if they are less military focused, they show some differences on the occupied area, as they also show there is combat reported in these areas (suggesting russian control over it is not that tight. The current map shows interesting difference on the Kharkiv-Sumy area, maye you could develop? Thanks… Read more »

Thank you for the continued daily updates. This is an excellent resource to stay updated on the conflict

Thank you for your summary posts!! We are from Brooklyn and are very worried about our Ukraine!! We are doing everything we can to support

Thank you for the posts every day, even though not so many comments are here, anymore.

Really good job you are doing here, IMHO these are the best maps of the conflict. I would really appreciate, if we can be able to see the change from yesterday (different tone of color or something like that).

But still awesome job, thank you for that!

Hi, the current workflow doesn’t allow me to easily visualize new gains. It’s on my to-do list, but no promises.