The situation remains tense, but stable. Ukrainian forces are conduction an operation to stabilize the frontlines. The worst situation is in besieged Mariupol, but Ukrainian troops continue to hold on. Belarusian army has reinforced its forces on the border with Ukraine and deployed UAVs to monitor the situation. 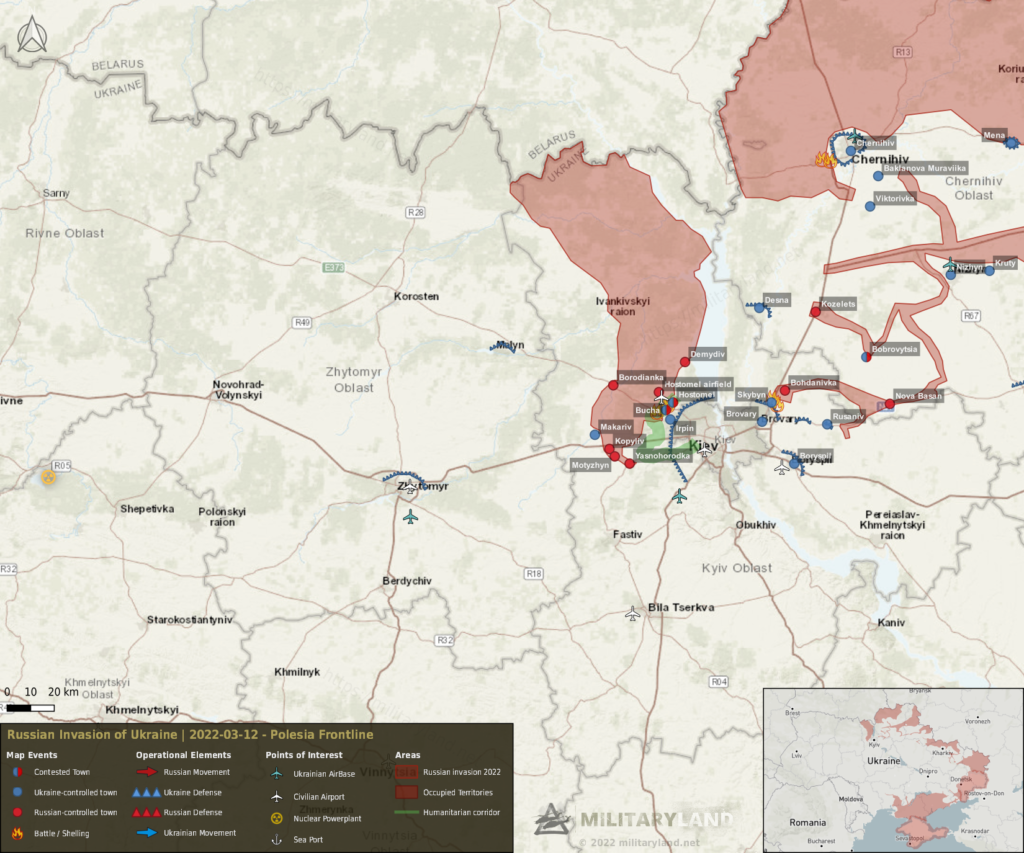 No significant change on the neither side of Dnieper River. Civilian evacuation continued today from Irpin and Bucha. Russian forces pushing south from Nova Basan, but their exact location is currently unknown. They’ll most likely try to block the Kyiv – Poltava highway (M-03).

Ukrainian authorities stated there is a threat of sabotages, main targets are military facilities and key infrastructure such as bridges. 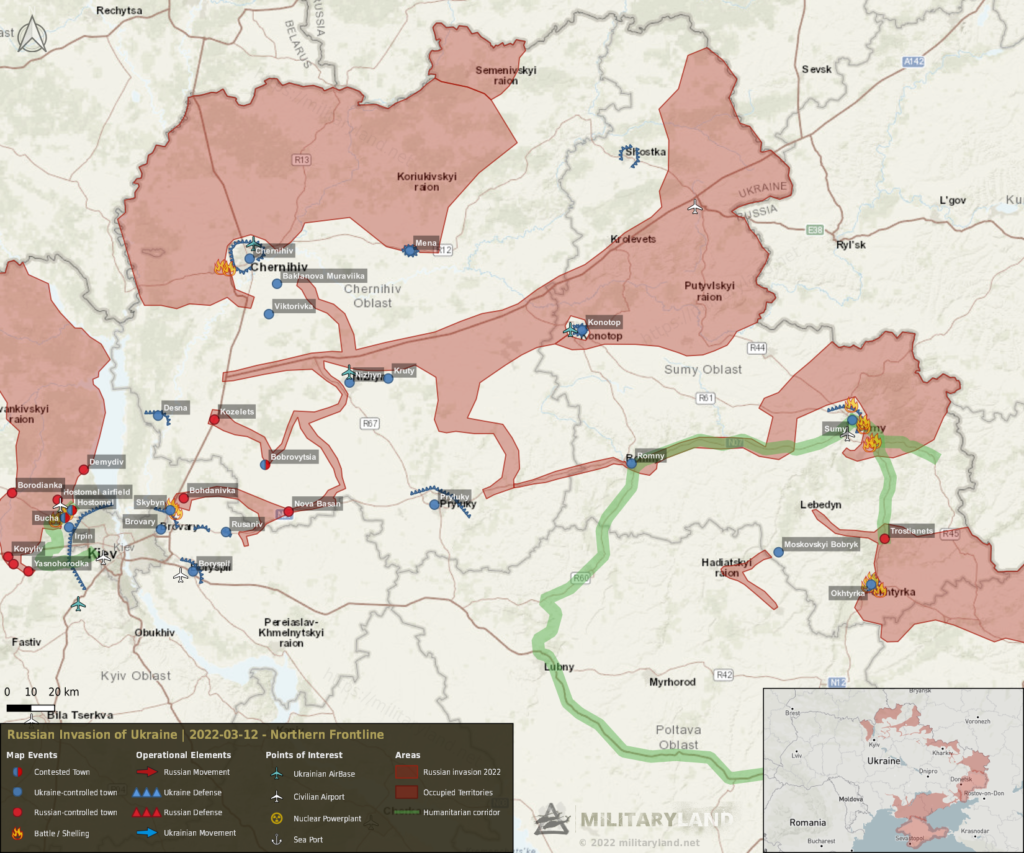 Ukrainian forces launched a counter-attack and captured several villages as the result. However, no names were released to the public in order to not hamper the ongoing operation. It’s been also confirmed that there is no enemy in Nizhyn and Ukrainian Territorial Defense Units are present in the city.

A humanitarian corridor has been opened today from Sumy to Poltava. Russian forces attacked civilian vehicles leaving the city in the afternoon. It’s been later clarified they did not use the agreed corridor. 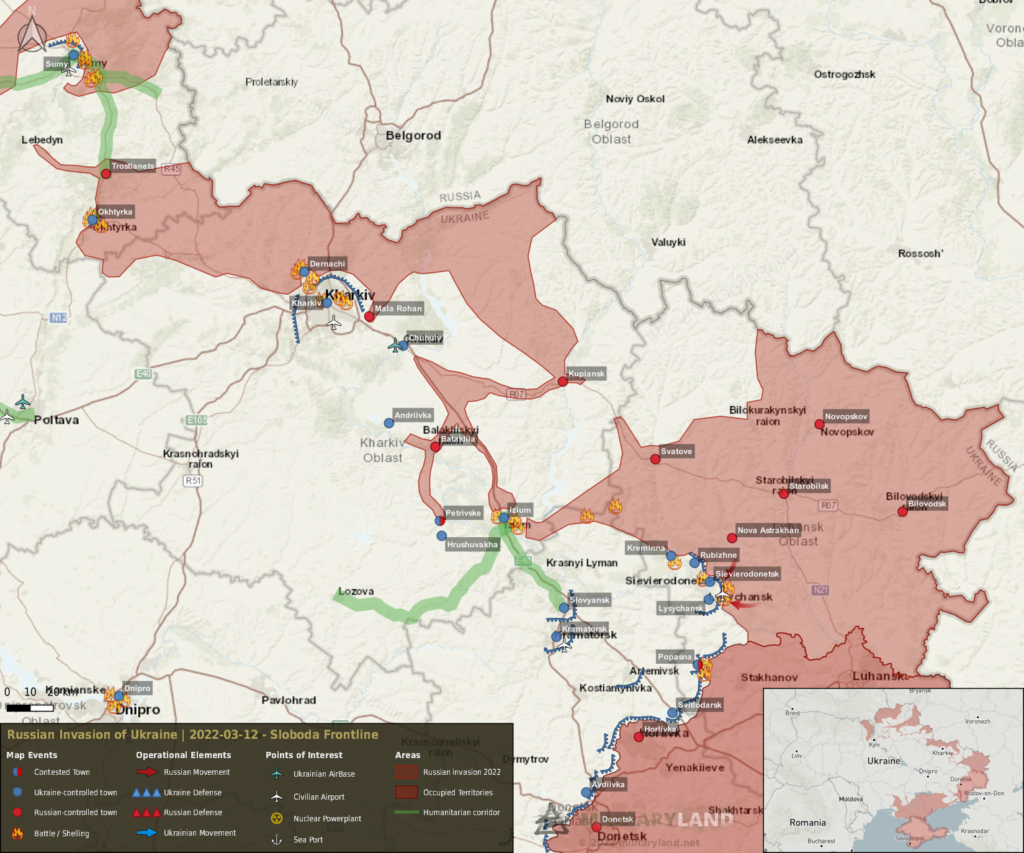 Russian forces have continued to shell Kharkiv, no movement has been reported through the day. 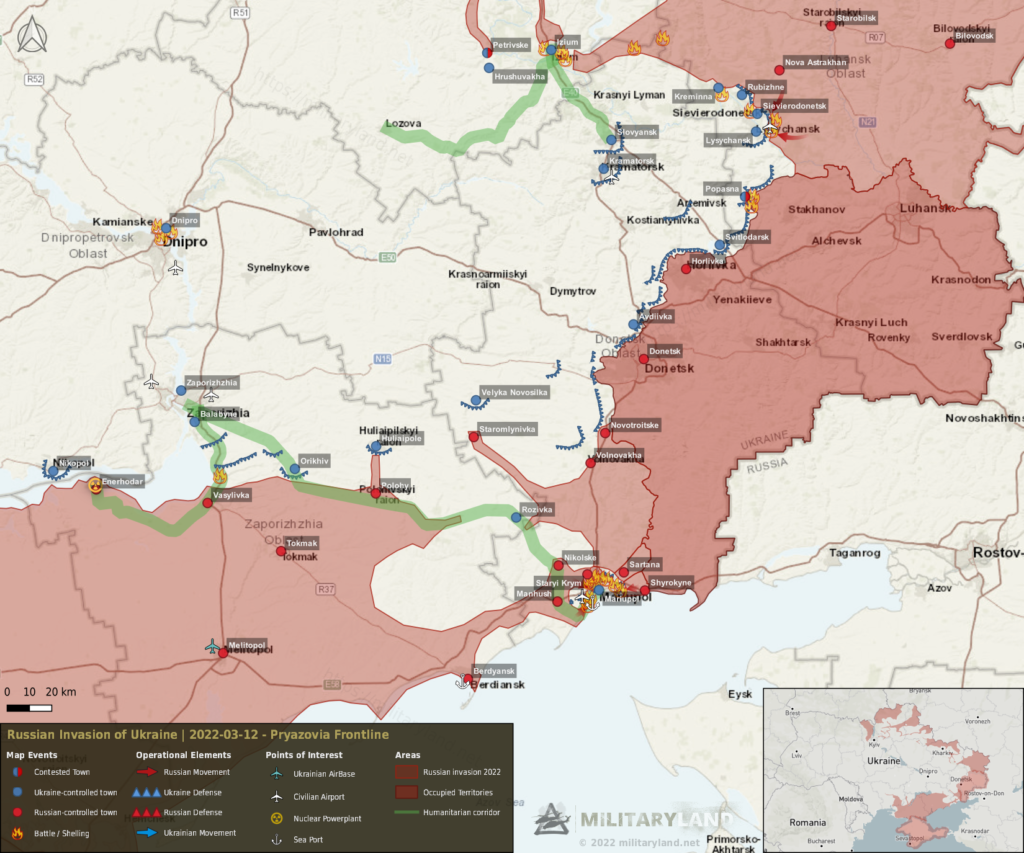 Russian forces attempted to break through Ukrainian lines near Avdiivka. The assault wasn’t successful and the enemy units retreated. As Volnovakha has fallen, Ukrainian forces concentrate its defenses in Velyka Novosilka now. There seems to an attempt by Russian forces to push north towards Vuhledar and Marinka.

The Russian forces resumed shelling of Ukrainian positions near Zaporizhzhia. A bridge in Kamyanske was destroyed by Russian artillery fire. 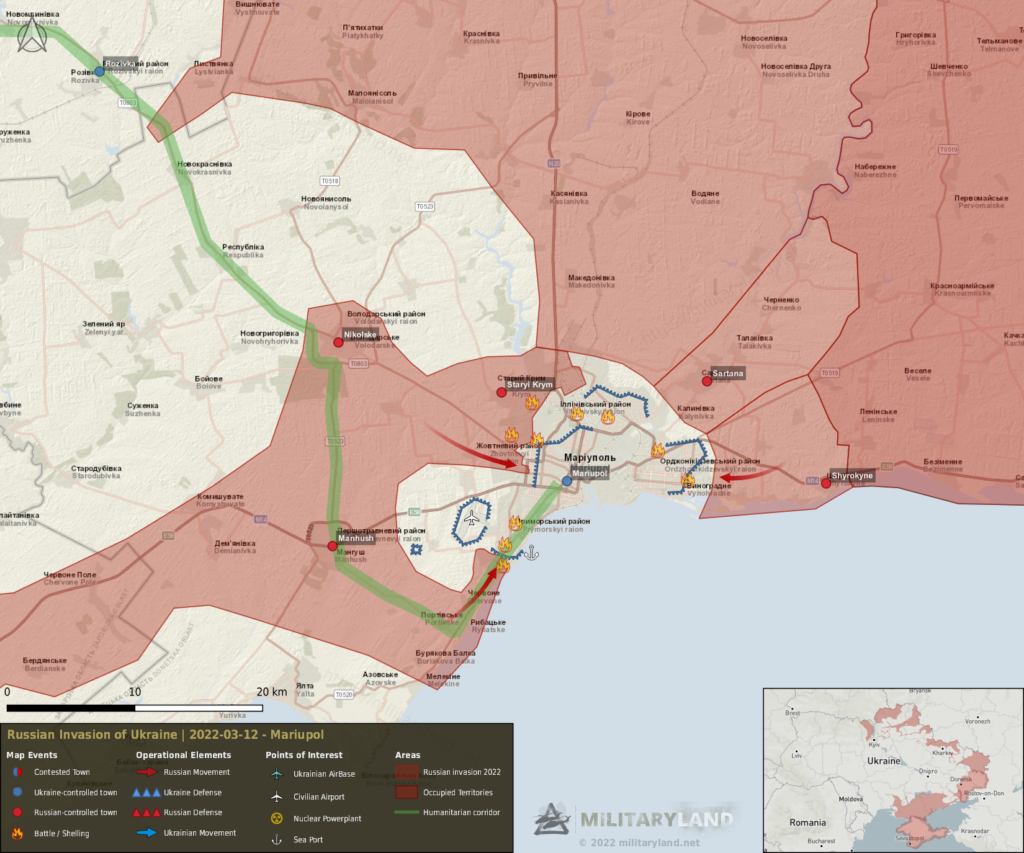 Russian forces entered the outskirts of Mariupol. Ukrainian forces destroyed at least one T-72B3 and BTR-82A inside the city. 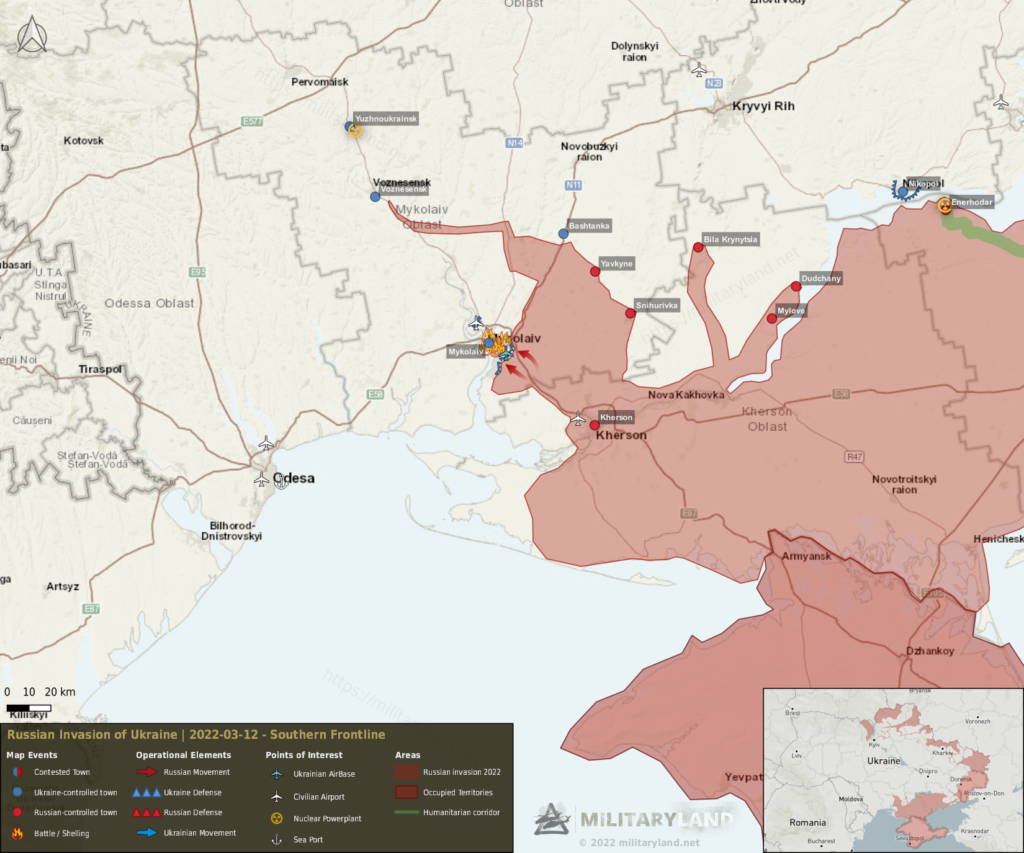 Russian forces have continued to shell Mykolaiv, but no significant attempts to enter the city were reported. 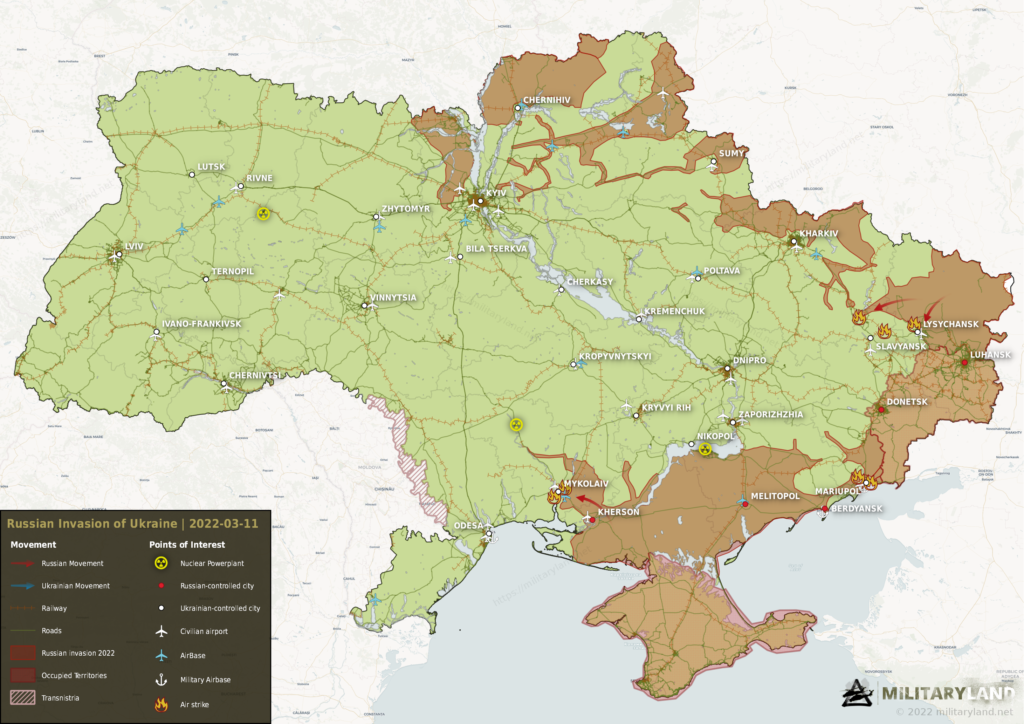 This is hopeful though. I’m glad my preassessments were completely wrong. The Ukrainian people continue to astonish my soul in their unified strength and ingenuity, and likewise, the Russians but rather in the new horrific extents of their brutality on the field. From one view, you could easily say, we are in for several long bloody years, but in the same vein, you might also say that at least in these years, an oppressive government… Read more »

From another view you could easily say that it will be pretty much over in a month or so once the best Ukrainian units at Mariupol and Donbas are completely blocked and gradually annihilated. Big cities are a different kettle of fish of course we’ll see

Too true. I guess we will only know the reality in the coming weeks, for better or worse.