Russian forces seem to halt all operations to focus on the primary goals – the capture of Mariupol, Mykolaiv, Kyiv, Sumy, Chernihiv and Kharkiv. All initial attempts to break through Ukrainian lines have been denied today. 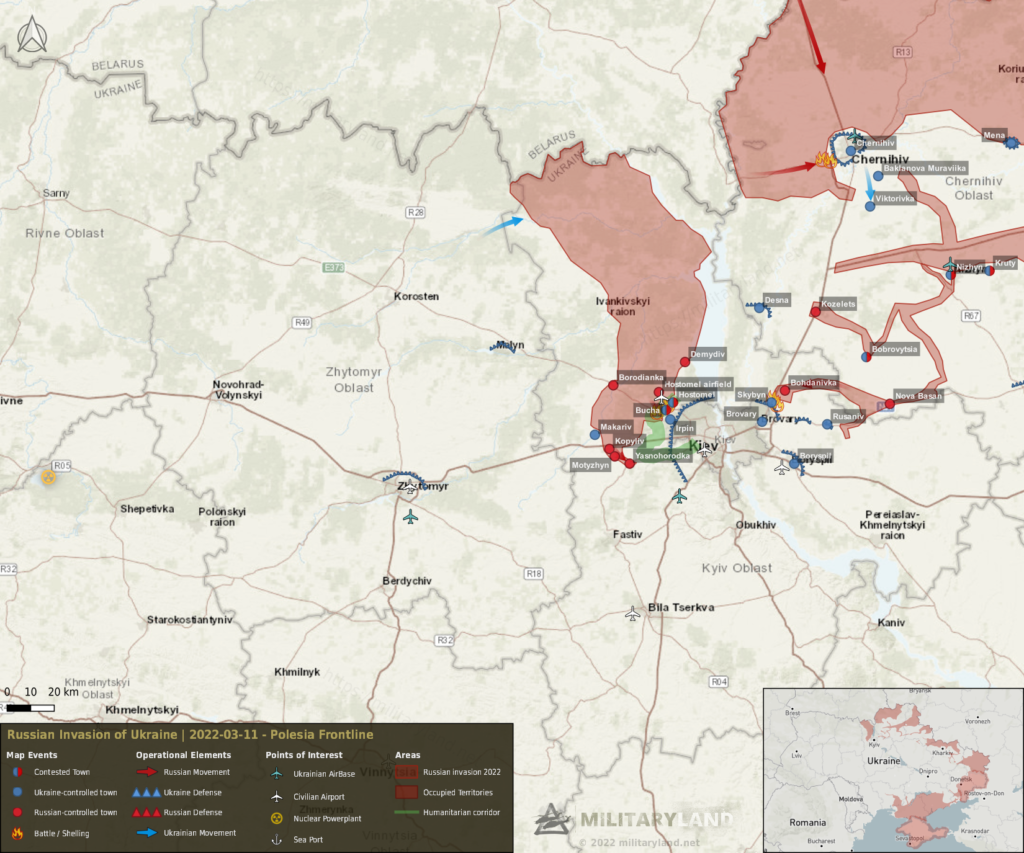 No new movement reported on the western bank of Dnieper. We still don’t know what, and if, Ukrainian forces gained new ground during the yesterday’s counter-attack in the north. On the eastern bank, Russian forces pushing hard to reach Kyiv outskirts. Ukrainian troops ambushed a Russian convoy on the way towards Brovary and destroyed at least one tank.

Nothing new in this area. 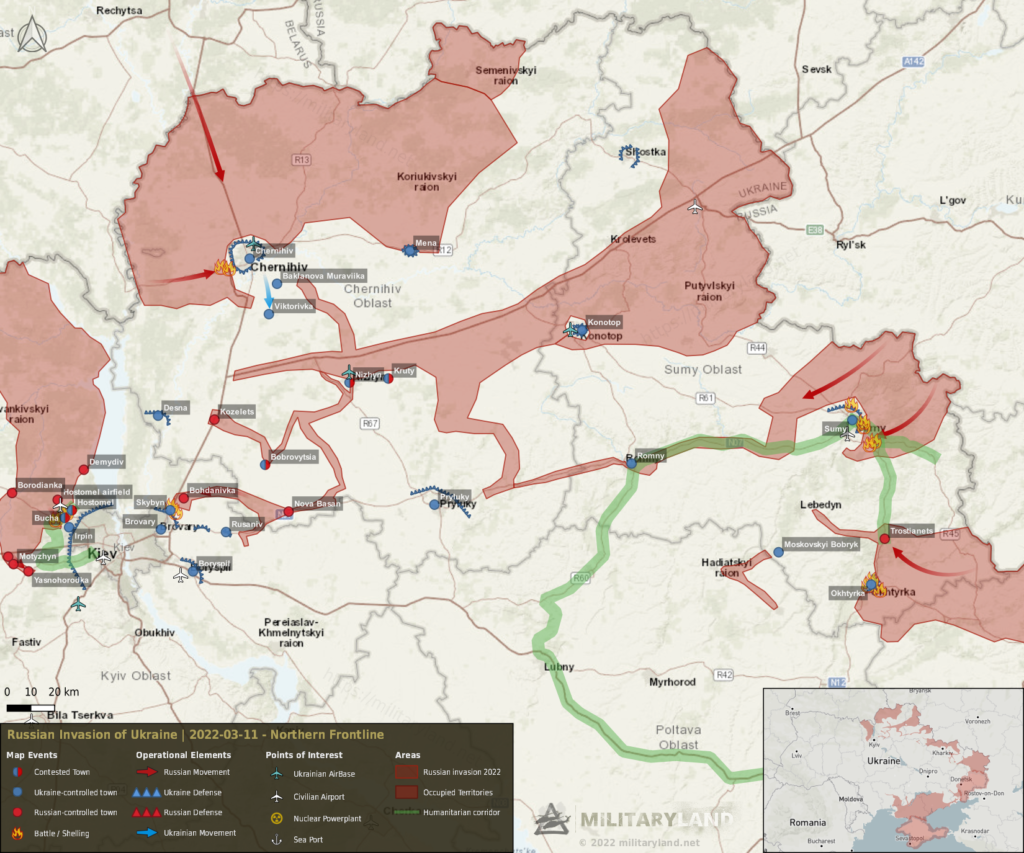 Russian forces continue to regroup its forces in the north and west of Chernihiv. The enemy attempted to close the gaps and lay full siege on Chernihiv. This move wasn’t successful.

A Russian military convoy was ambushed by local police and Territorial Defense unit near Romny. A dozen of Russian soldiers have been detained as the result. There are reports of ongoing urban combat on the outskirts of Sumy at the time of writing. 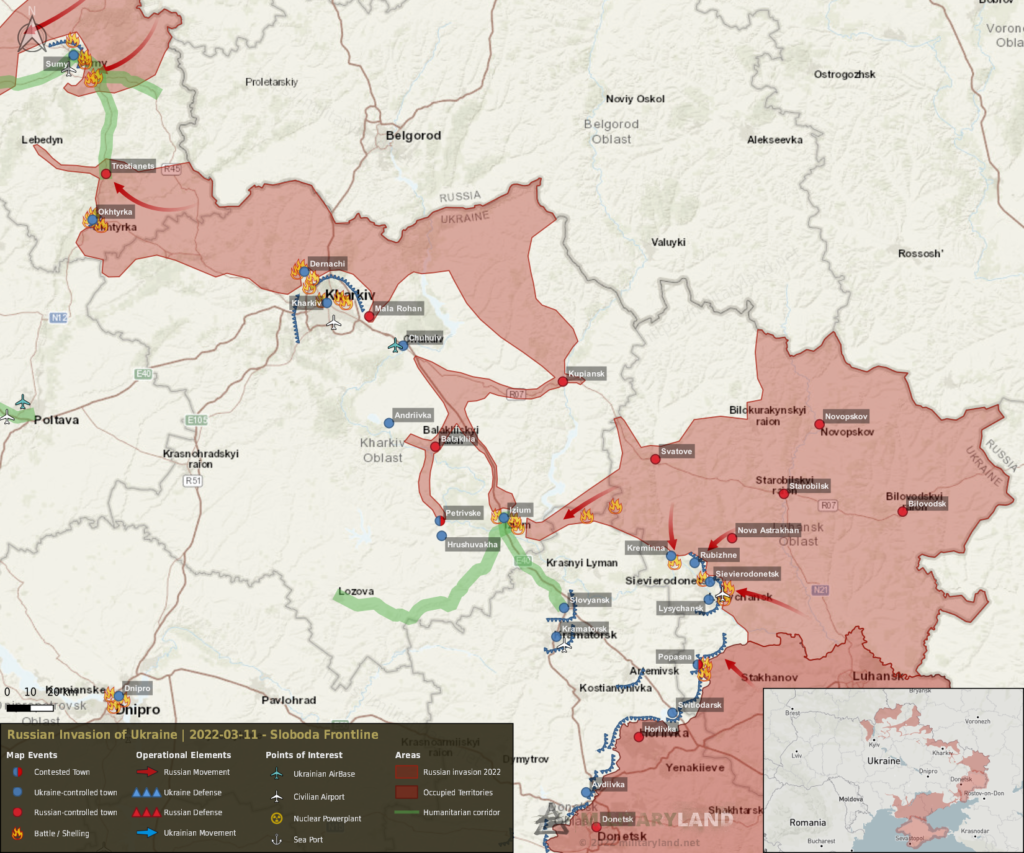 Ukrainian forces conduct defensive operations in the area. A Russian convoy was ambushed near Chuhuiv. The Russian push to the south from Balakliia hasn’t been successful so far. Izium lays in the rubble, but every day of Izium’s defense gives the Ukrainian forces stationed at Slovyansk another day to prepare the defense lines.

Kharkiv has been a target of shelling all day.

The mayor of Luhansk Oblast stated that Russian forces control 70% of the oblast. Ukrainian forces are currently focusing on the defense of Popasna – Lysychansk – Sievierodonetsk – Rubizhne – Kreminna line. 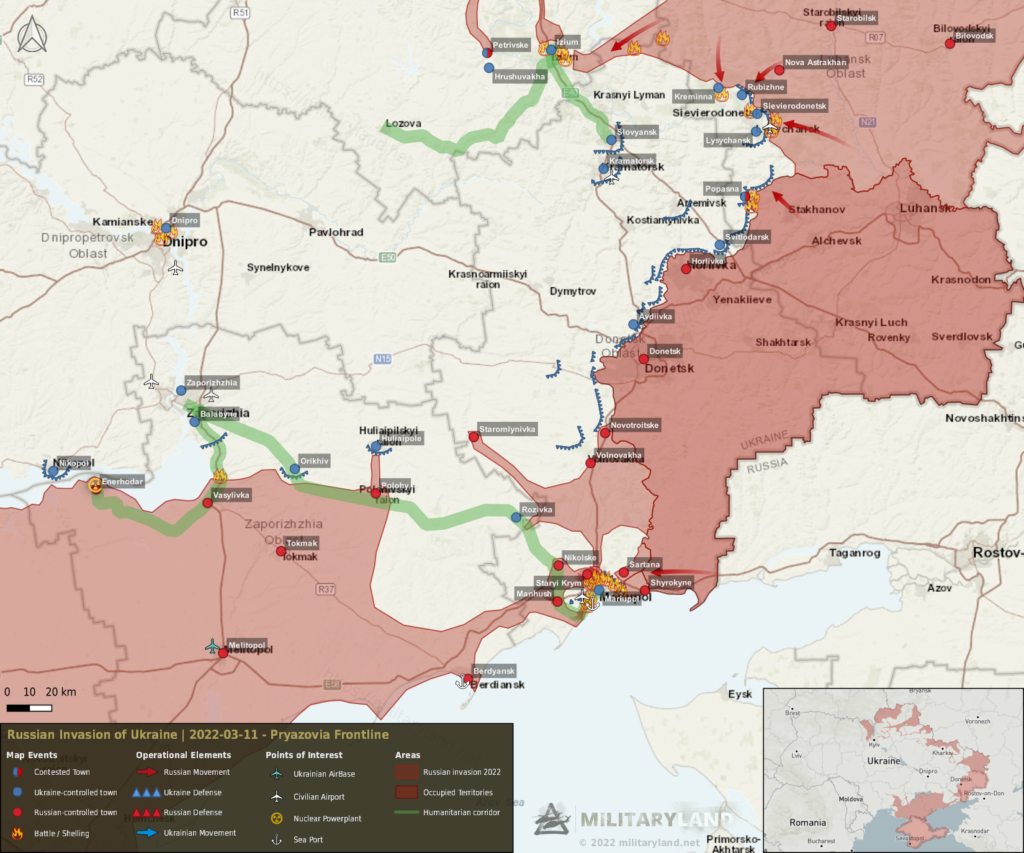 Russian forces concentrate most of its troops towards Mariupol.

Ukrainian forces ambushed a Russian convoy near Vasylivka and destroyed several trucks. Nothing else has been reported for today in this area. 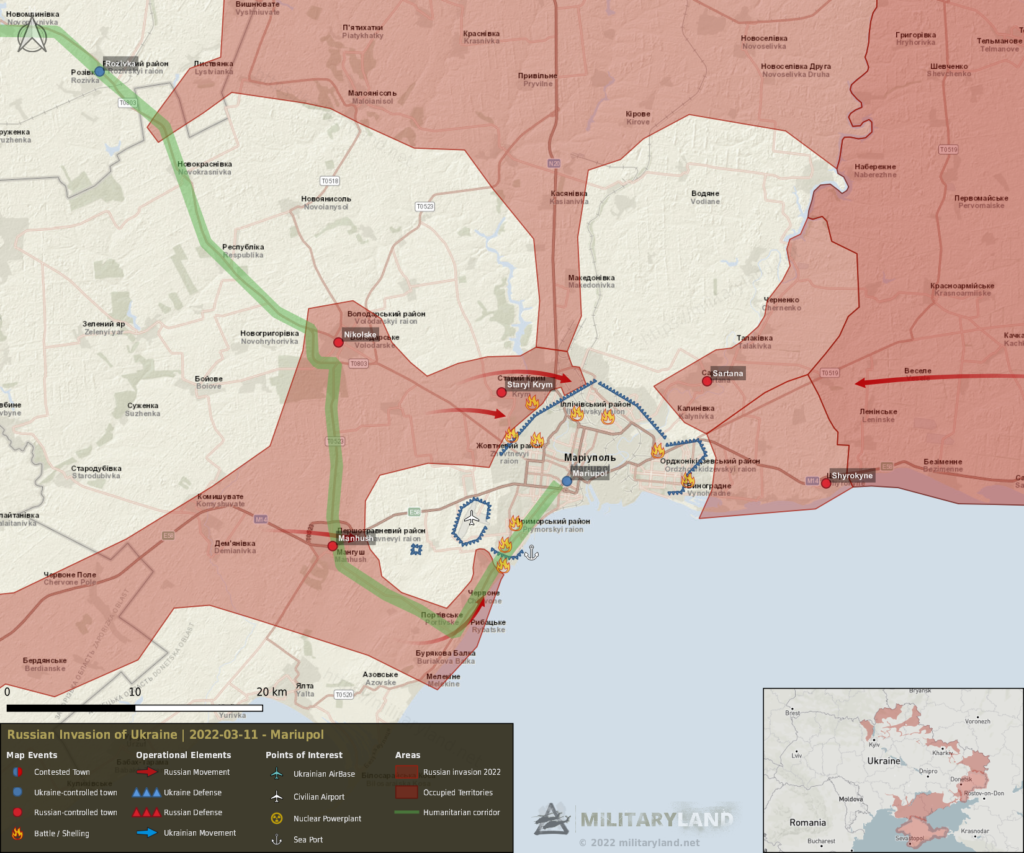 Russian forces entered the city, but Ukrainian forces are successfully defending all strategically important points. The evacuation of civilians did not happen again. 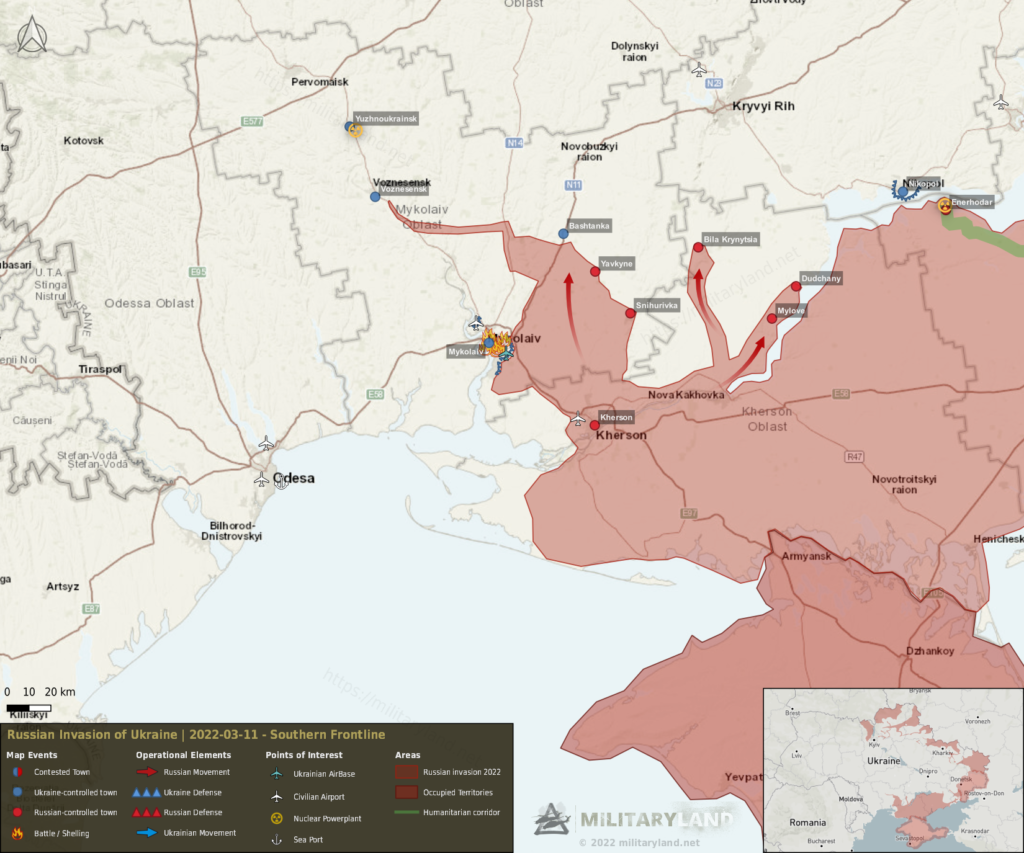 Russian forces shelled Mykolaiv through the day and have begun the military operation to capture the city. The first attempt to enter the outskirts in the evening wasn’t successful, Ukrainian forces repelled the attack. 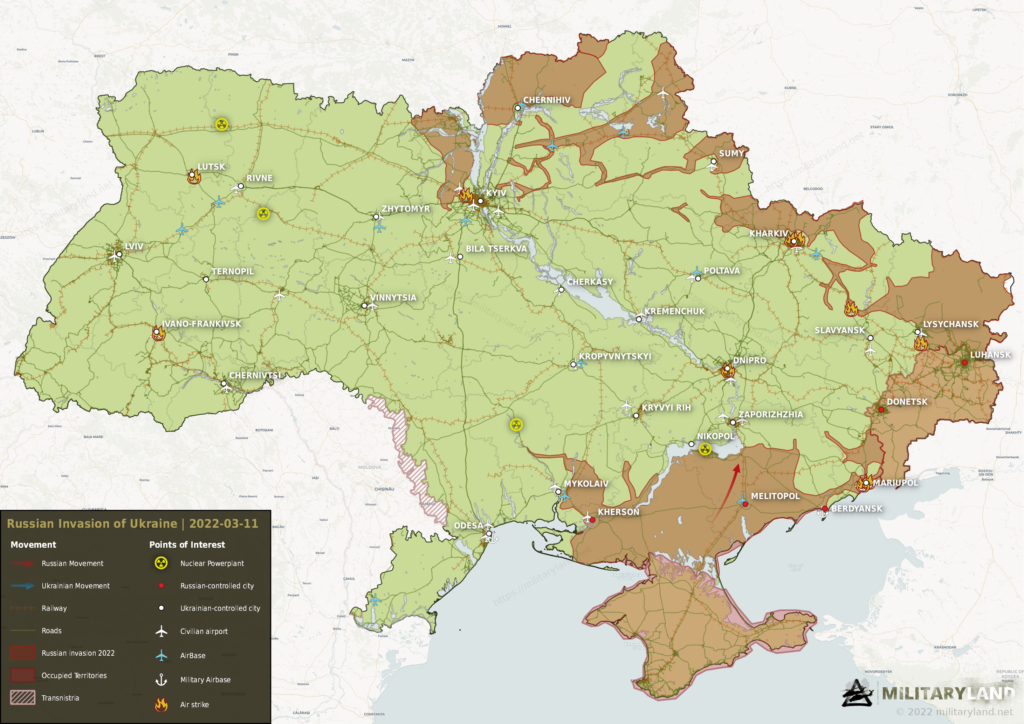 At this rate Ukraine will lose control of Kherson, Zaporizhia, Donetsk, and Luhansk oblasts. Here is an idea, why don’t you stop thinking you can fight a superpower just because NATO tells you it is possible whilst dangling a carrot in front of you. This is not a game for the civilian population. NATO cares about geopolitical influence and specifically about weapons contracts and money. That is historically verifiable fact. Even so, I quote the… Read more »

They have tried to negotiate, Russian terms are surrender, lose territory, get rid of the armed forces almost completely ( meaning they will just get invaded easily next time) and agree to not join the bodies that could protect them from being invaded again. Not only are those terms unacceptable to Ukrainians but Russia’s word means nothing which means any peace agreement with them means nothing too. Ukraine’s only hope of continued existence as a… Read more »

The biggest puzzle is why Putin thought he could take over the Ukraine with only 1400000 troops, considering that most would have been logistic and support troops. Were his original objective only to bluff the Ukrainians in order to get a negotiated settlement. After all the Russians have an army of 3 million. Were is the Russian air force?

– This invasion is like the opposite of World War 2. We had a big initial Russian activity which has now become quiet. Russia has failed in its initial scheduled timetable of objectives. – However, there is at least some momentum thanks to their shelling of cities. – Ukraine still engaging in hit-and-run ambushes, which may evolve into a long and grinding war of attrition – which would be bad for Russia. – Russian columns… Read more »