The advance of Russian forces has stopped on all fronts. We have seen first sights of Ukrainian counter-offensive in the north and more ambushes of Russian’s logistical convoys in the rear. 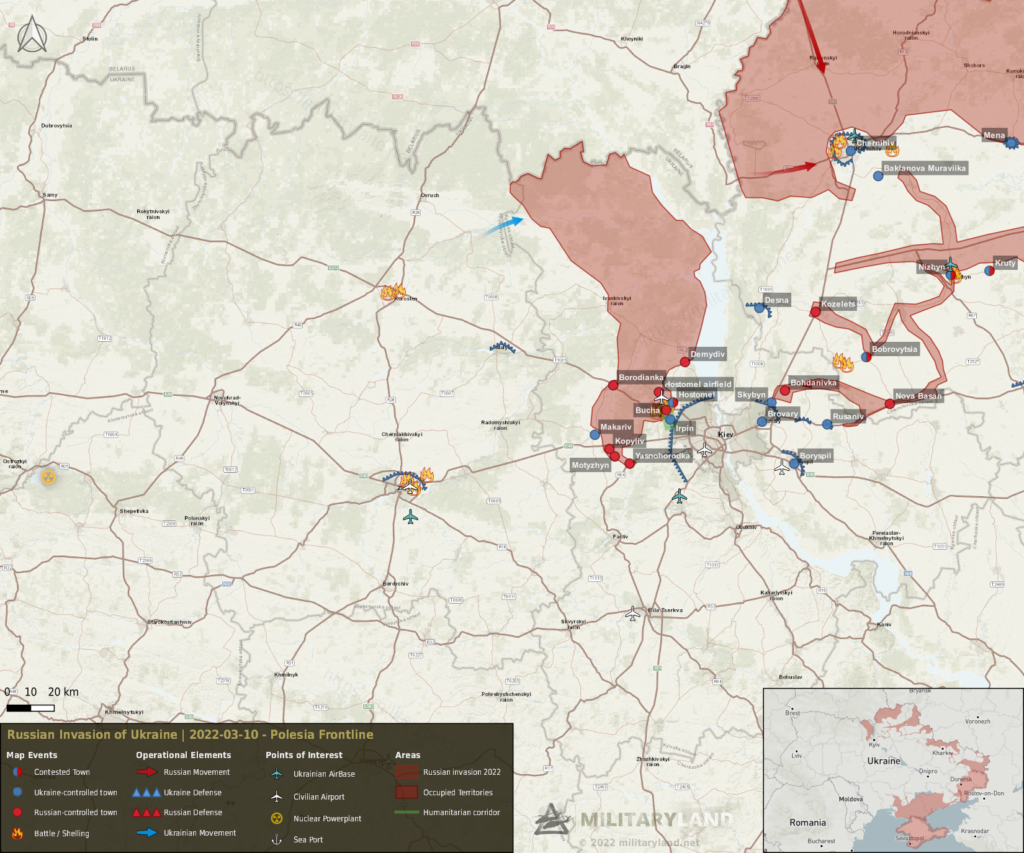 On the left bank of Dnieper, Ukrainian forces conducted a counter-attack in Poliskyi raion and forced enemy troops to fallback. It’s currently unknown how much ground Ukrainian forces gained.

On the right back, Russian spearheading element reached Skybyn, but they were ambushed by Ukrainian units and precise artillery. The element lost a few tanks and APCs and had to withdrew to Bohdanivka.

Russian planes hit the town of Korosten, north of Kyiv. One civilian killed. 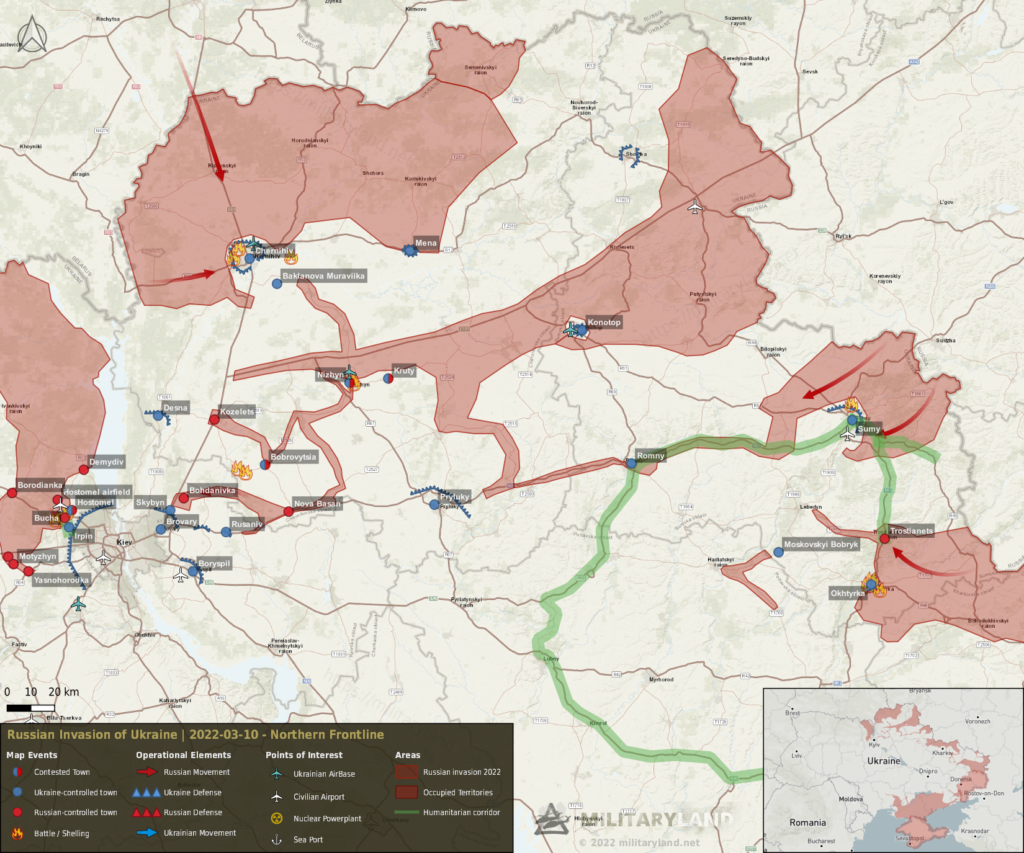 The civilian evacuation from Sumy successfully continued today as well. No combat reported from this area, just sporadic shelling. 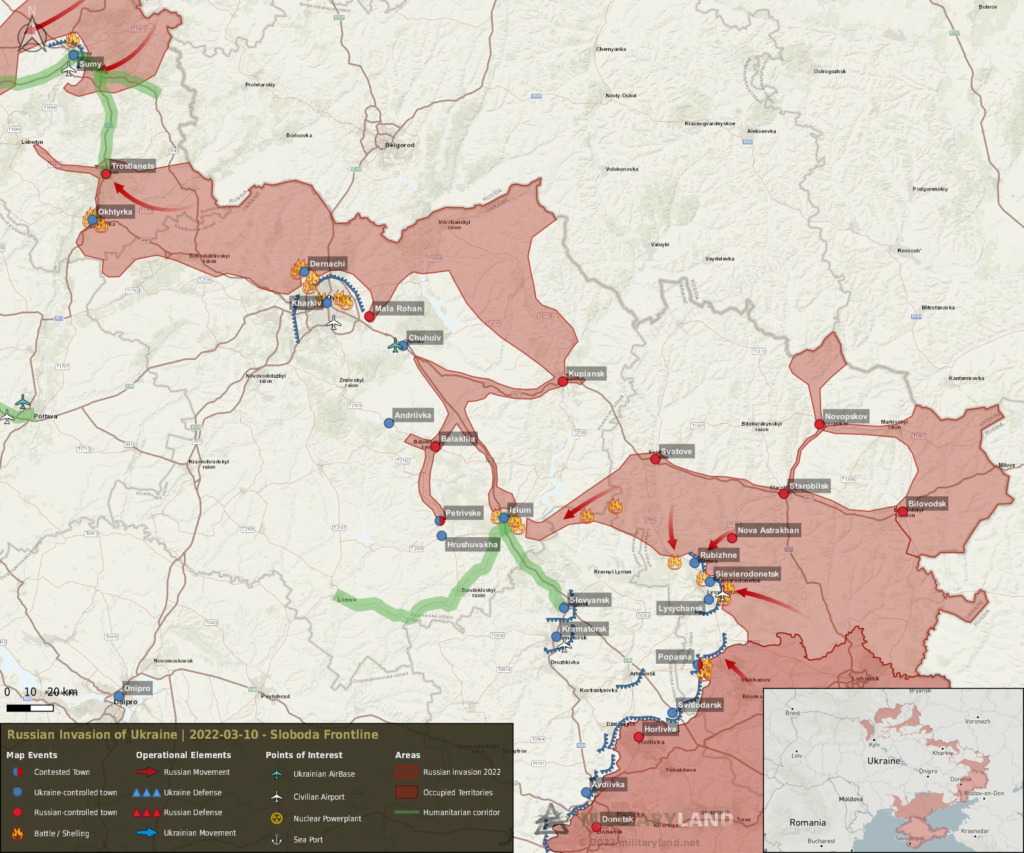 Russian troops captured a settlement of Mala Roha and are probably trying to capture the road between Kharkiv and Chuhuiv.

No changes reported from this area. Izium is still under Ukrainian control. The situation in Petrivske is unclear. Russian forces continue to shell Sievierodonetsk and Izium. 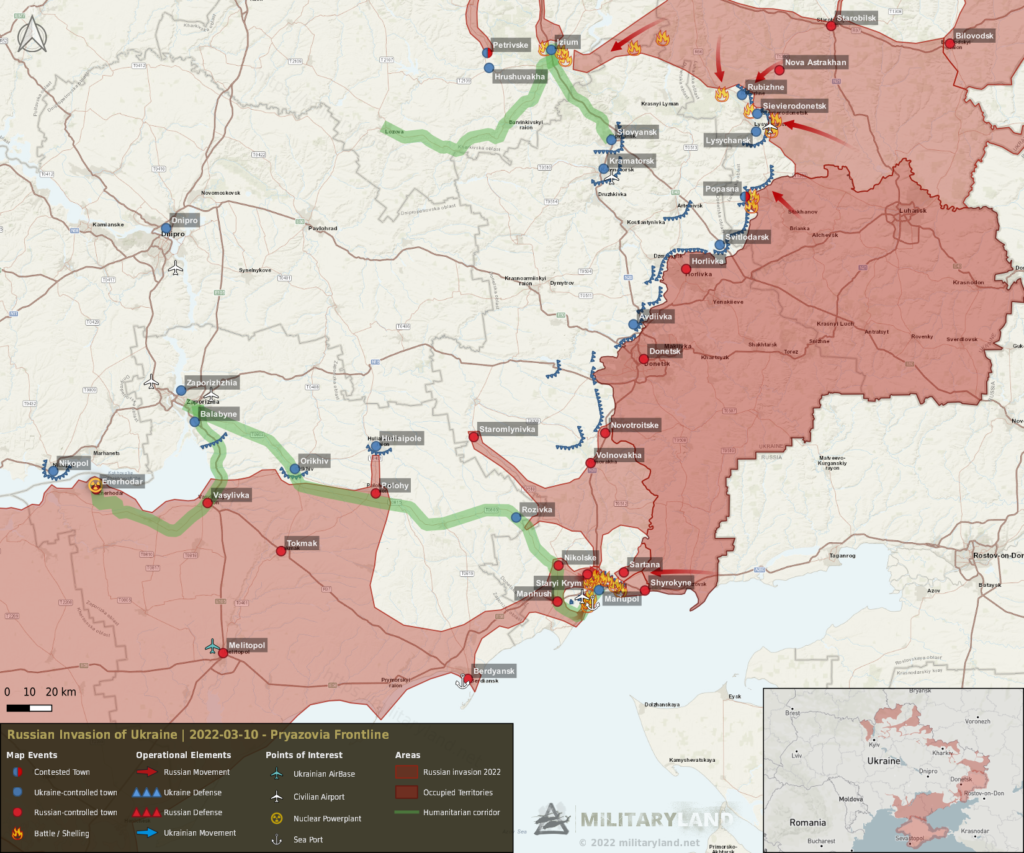 Russian forces remain in Novotroitske, Staromlynivka, Volnovakha and did not move further today.

A humanitarian corridor was working today from Enerhodar towards Zaporizhzhia again. The frontline remains unchanged in this area. 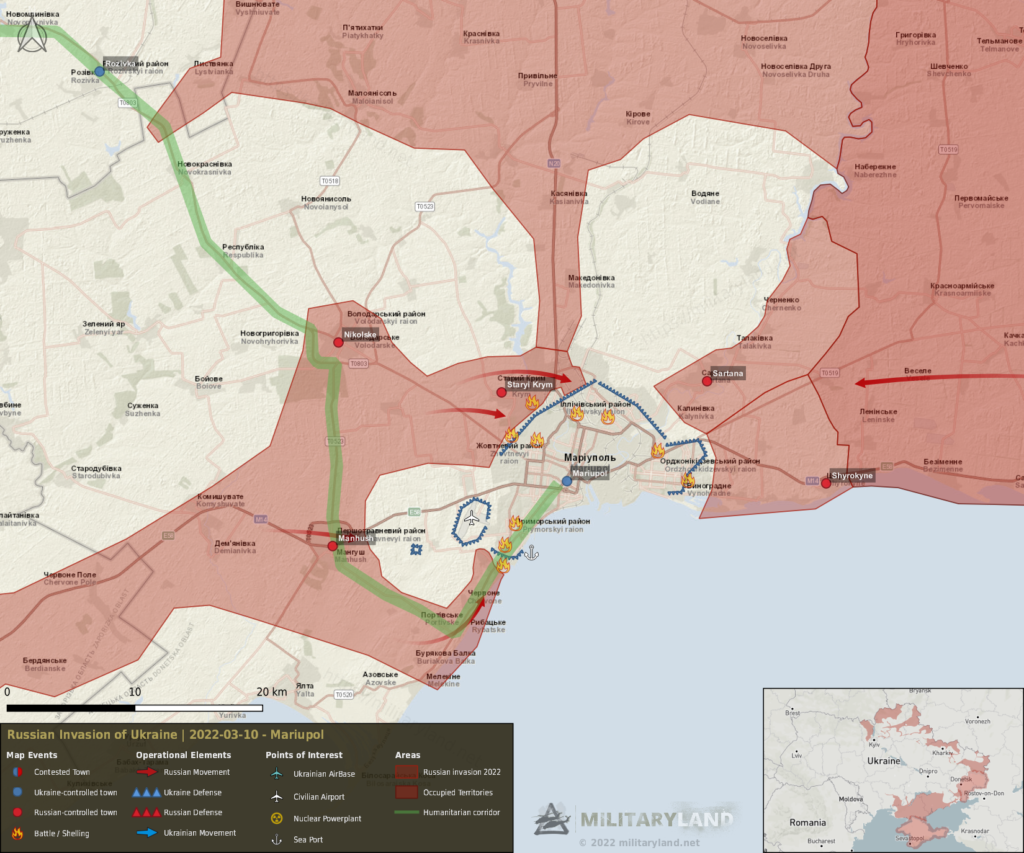 Russian forces approached Mariupol outskirts from the east, alongside the Sea of Azov. We also learned that Sartana has been captured by Russian forces a few days ago. The street battles inside Mariupol are few hours away. 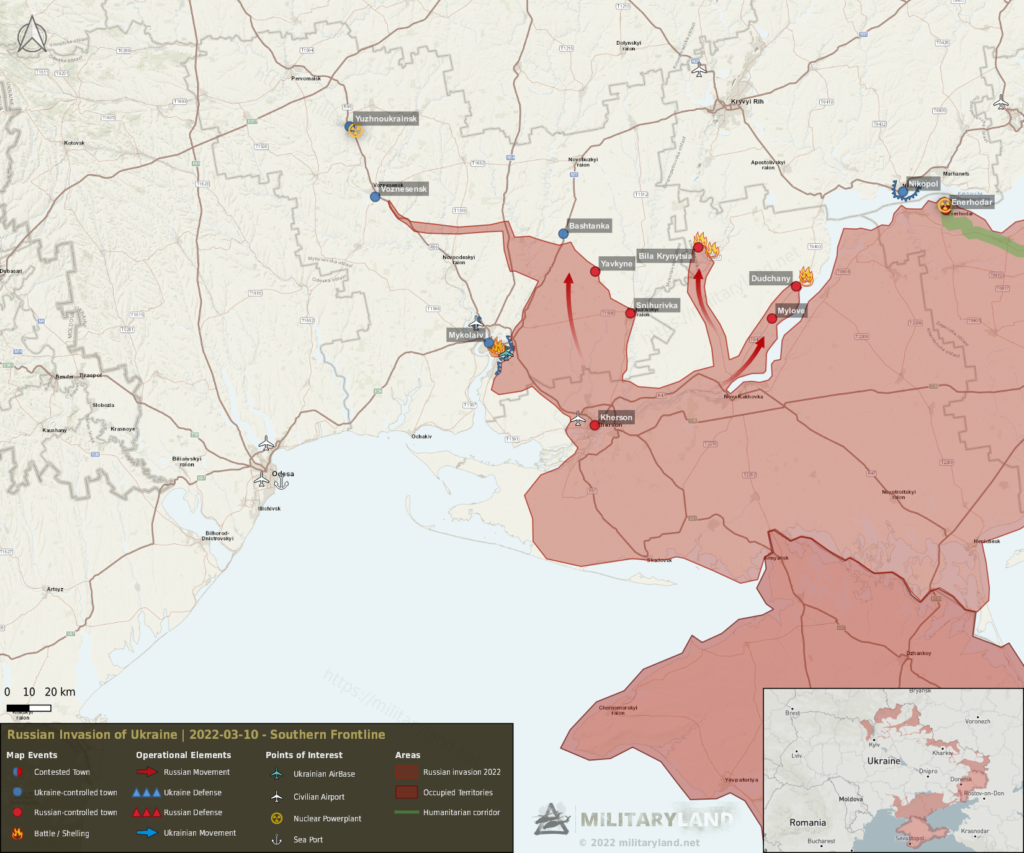 Mykolaiv continues to prepare defenses for Russian attack on the city.

The Russian push towards Kryvyi Rih and Nikopol has been stopped by Ukrainian defenders. There are reports of destroyed Russian convoys, but we have no visual proof. 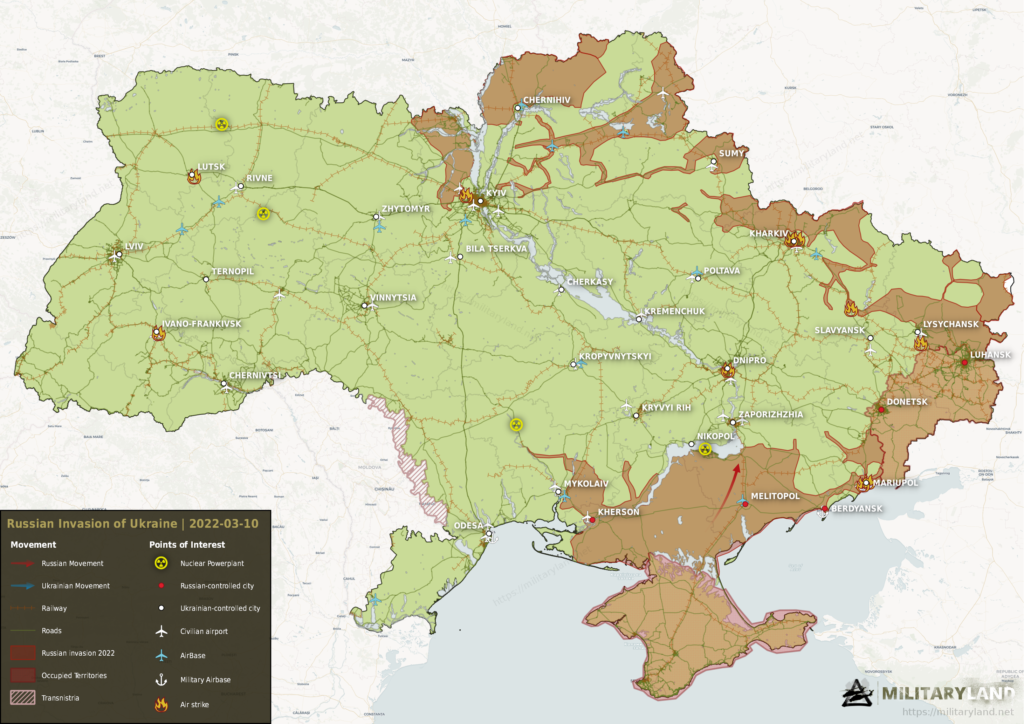 Dear Jordi, did you think Spain has imperialist urges, come on guy. Just pass this weed.
Only one more thing. Even in front of this catastrophic events, did you guys still thinking your enemy is “el estado” Just go to Jarkiiv and learn what is an imperialist and totalitarian state looks for.

– Ukraine-Russia meeting in Turkey not fruitful. – Ukraine may stop the Russian encirclement of Kyiv. – Russians are fielding T-72As: these are ancient tanks about 40 years old without any upgrades. Even the later model T-73B3s are bad tanks. This means Russia is really down to the dregs, as these dinosaur T-72As aren’t even battle-worthy. This Antiques Roadshow is on the front-line in the North, it is no wonder little progress is being made… Read more »

Any news on American Bioweapons labs?