Both sides agreed on a silence regime and evacuation of civilian population. The humanitarian corridors worked to some degree on Polesia, Northern and Pryazovia frontline (except not Mariupol).

Russia forces pushed to suburbs of Mariupol and towards Kryvyi Rih, stretching its forces in the south even more. 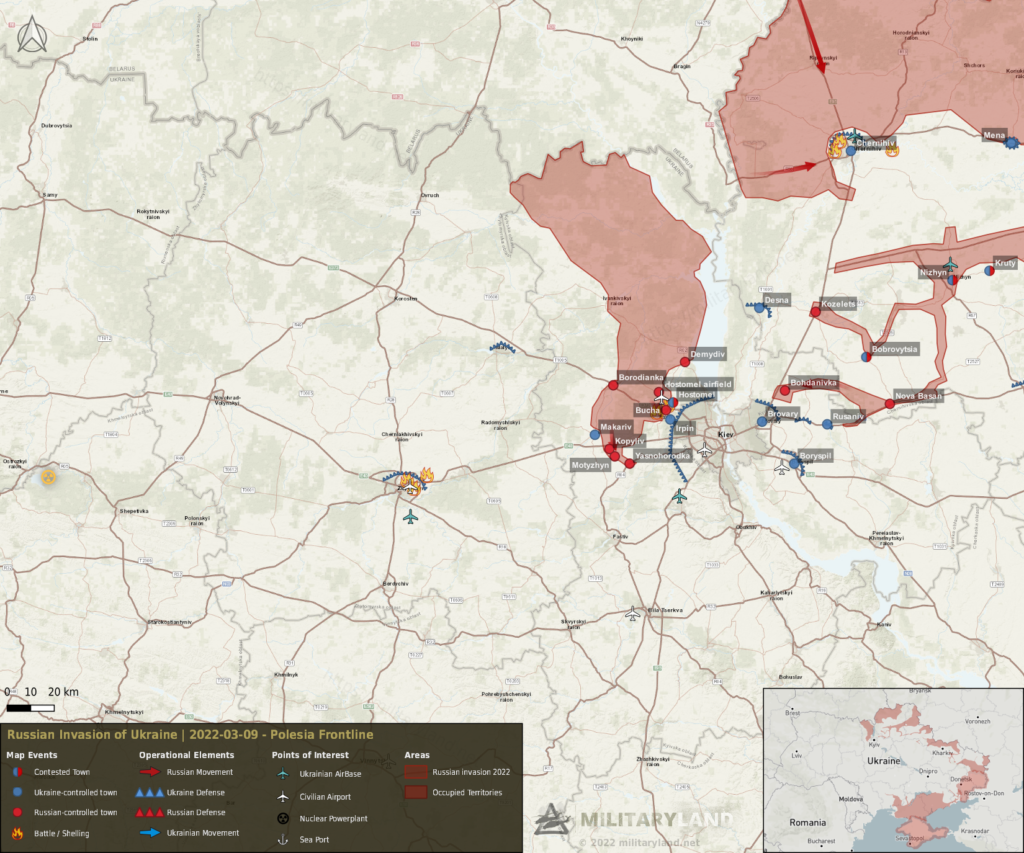 The situation in the area was relatively calm. The enemy continue to amass its forces in direction of Bucha, Hostomel and Yasnohorodka. The civilian evacuation from Irpin continued today. According to British/US intel, Russian forces will launch a massive attack on Kyiv no later than Sunday.

A Russian plane conducted an airstrike on Zhytomyr, damaging infrastructure in the vicinity of Berdychivsky Bridge. No ground combat reported from this area. 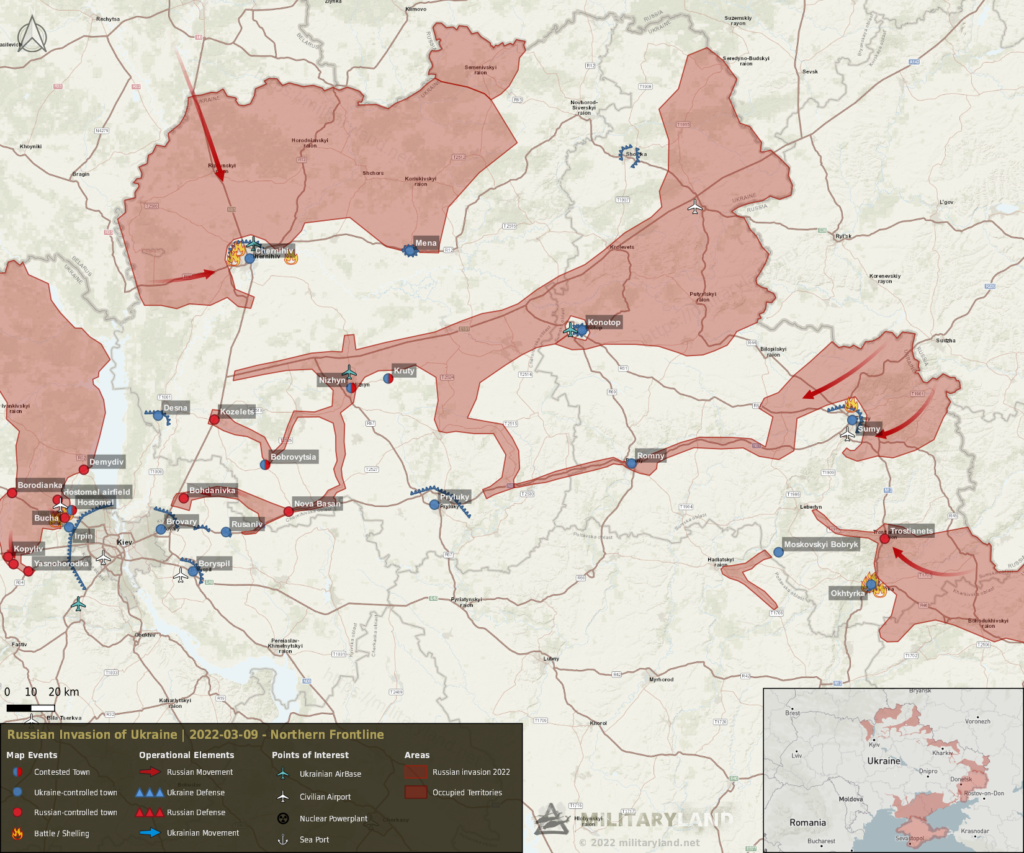 The civilian evacuation from Chernihiv did not happen today. Russian forces continue to regroup its forces in the north of the city.

I marked Kozolets as under Russian control because I found evidence that Russian troops indeed reached it a few days ago.

The civilian evacuation from Sumy successfully continued today. Ukrainian sources reports up to 50 thousand civilians left the city in total (yesterday and today). Romny is reportedly under siege, confirming that the Russian forces bypassed the city when moving from Sumy towards Pryluky. 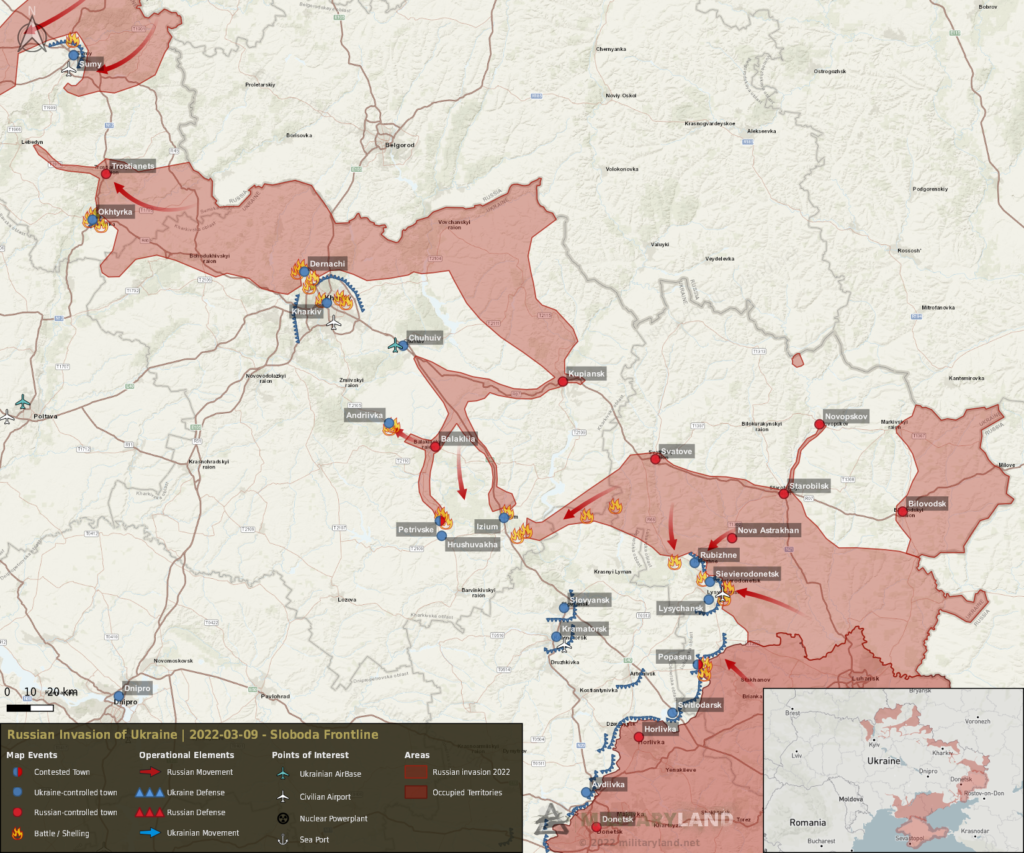 Russian recon/sabotage group (DRG) attacked a Ukrainian checkpoint in the village of Andriivka at night. The assault was repelled by a Ukrainian Border Guard unit stationed there. Ukrainian forces conducted a successful counter-attack in the direction of Dernachi, liberating the settlement and lifting the enemy pressure in the area.

The situation in Izium reached a critical stage. Some civilians were able to left towards Slovyansk, but most remained in the town. It’s unclear if there are still some Ukrainian elements in Izium. The town is heavily damaged.

A Russian spearheading element approached Petrivkse and attempted to push towards Hrushuvakha. Ukrainian forces reportedly repulsed the attack, but the situation remain tense.

Russian forces reached the outskirts of Rubizhne and gained fire control over the road connecting Rubizhne and Sievierodonetsk. In the south, Russian troops reportedly entered to Popasna, but we cannot verify it. 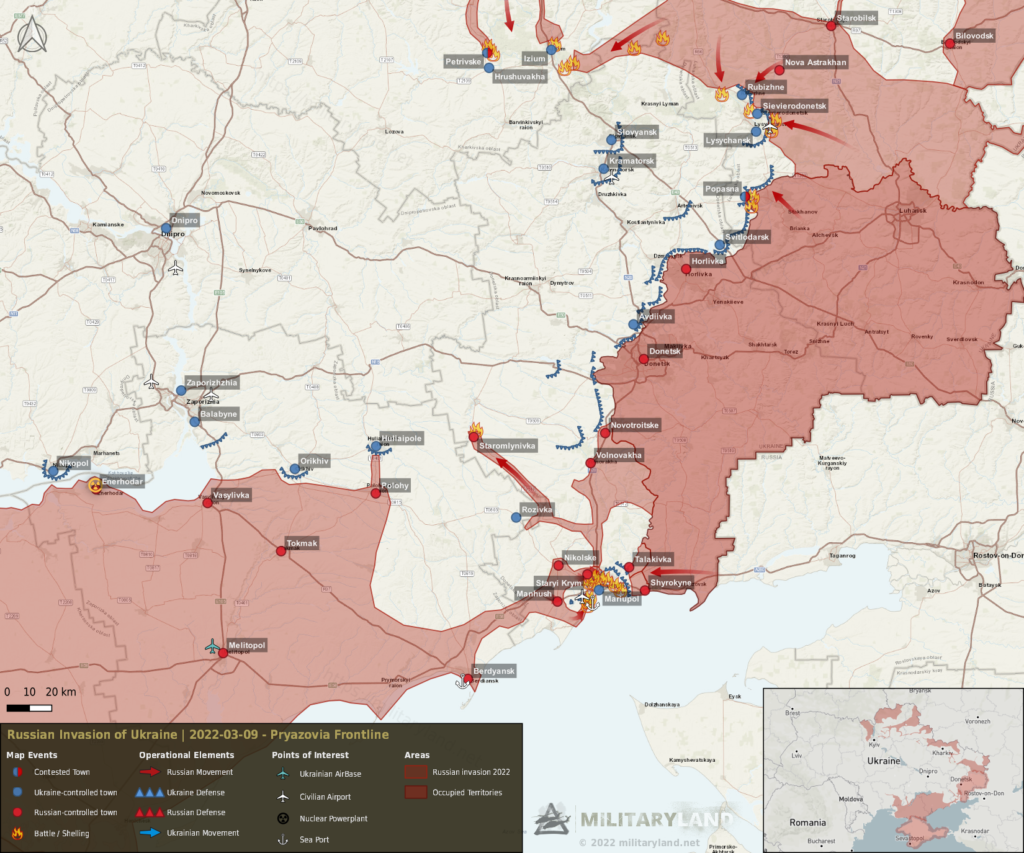 Russian forces gained control of Nikolske. A spearheading element pushed north and reached Staromlynivka, where a Ukrainian ambulance was ambushed. This push puts Ukrainian units at Huliapole under pressure, and it might complicate things for Ukrainian forces stationed south of Donetsk.

A humanitarian corridor was working today from Enerhodar towards Zaporizhzhia. The frontline remains unchanged in this area. 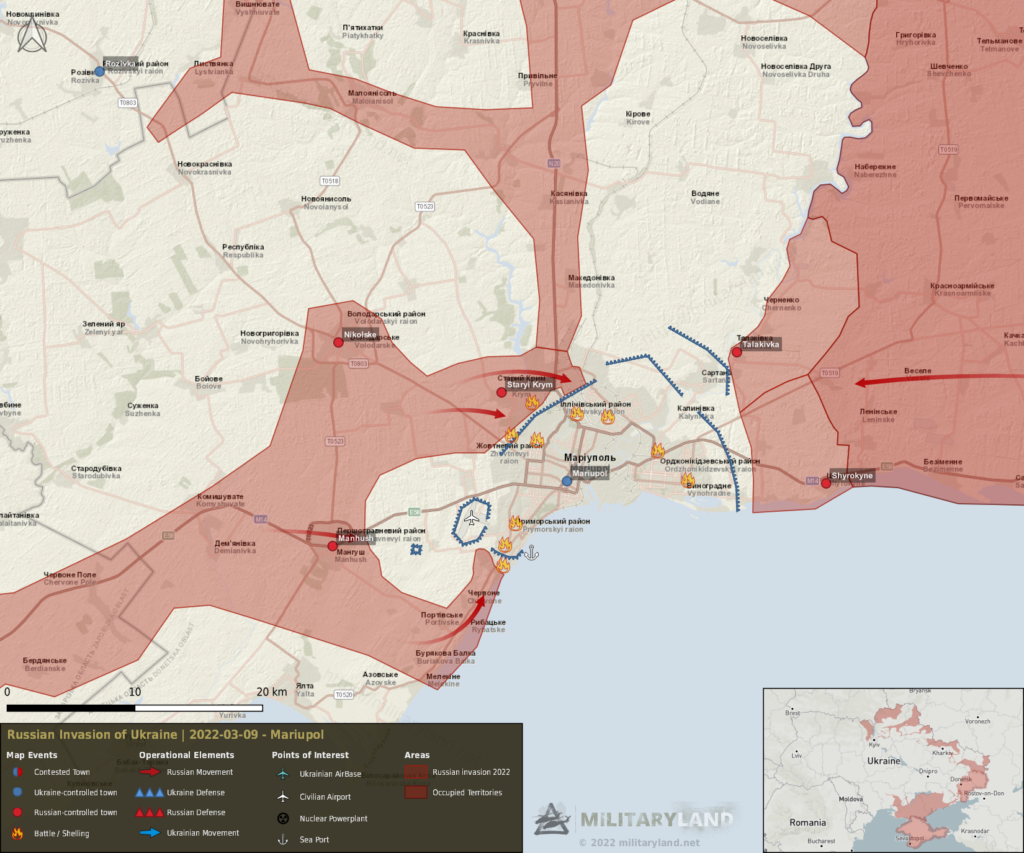 Based on the ongoing events in the north of Mariupol, and unless Ukrainian forces suddenly shift its defensive tactics to more offensive ones, the situation for Mariupol doesn’t look good. 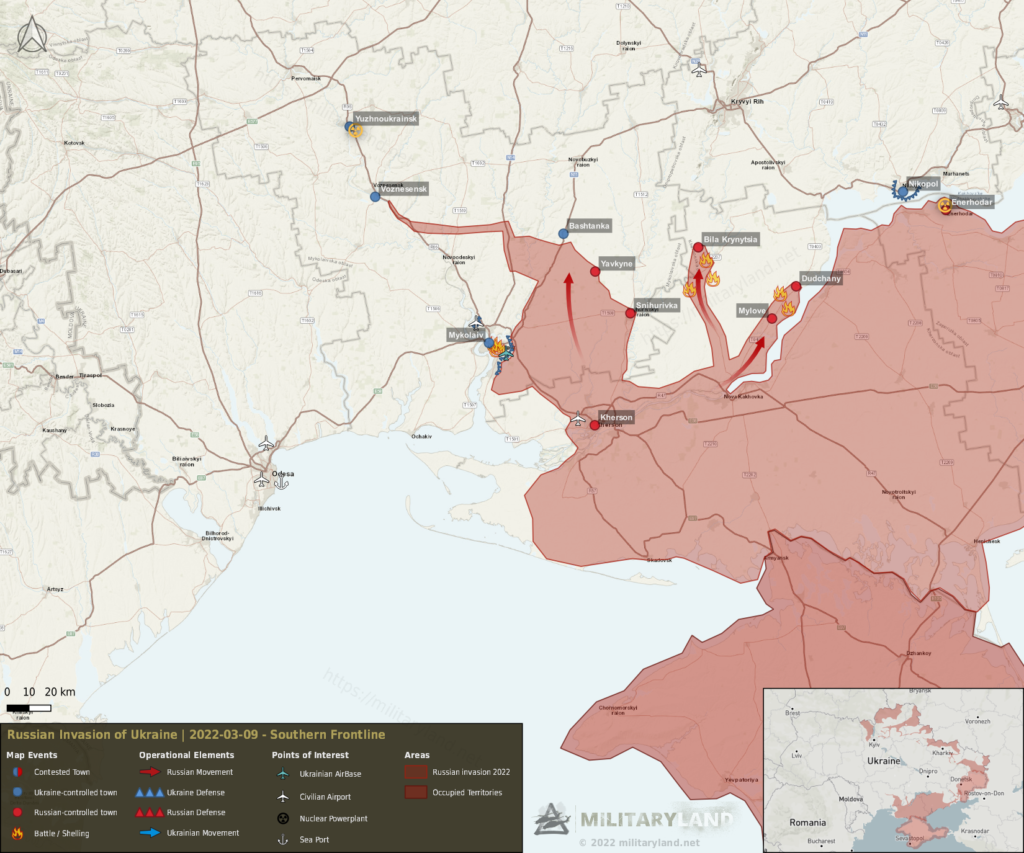 Russian forces shelling Mykolaiv from the north-east and north, Ukrainian forces continue to dig trenches and setting up barricades. The moment of Russian attack on the city is approaching.

Meanwhile, the enemy pushed north of Mykolaiv, alongside Inhulets river and connected with its forces near Bashtanka. Fighting was also reported from Voznesensk, but Ukrainian forces are successfully holding the ground.

Russian troops pushed north towards Kryvyi Rih from Nova Kakhovka. They captured Mylove, Dudchany and Bila Krynytsia, despite Ukrainian air strikes in the area. The cities of Nikopol and Kryvyi Rih prepares for defense. 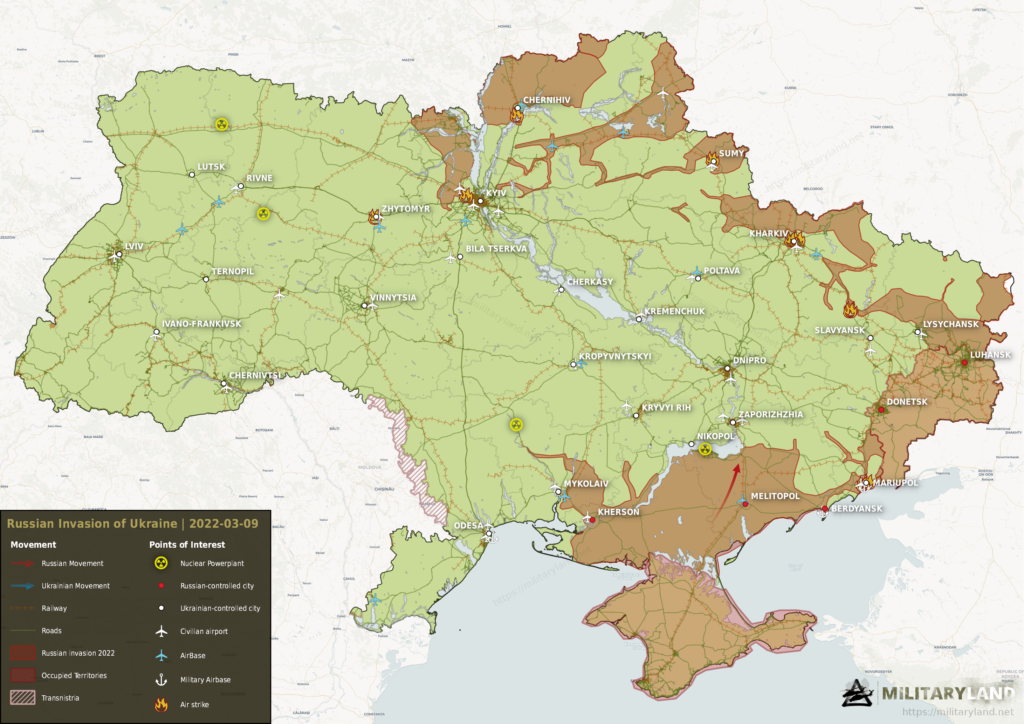 • It is now Day 15 and according to the captured invasions plans by Ukraine, Russia was supposed to have finished the invasion by now. Russia has officially bungled their invasion. • Russia screwed up in the north – you don’t send an army down a single road with no exit other than a bridge at the end of it (Irpin River bridge). Someone should have sent Russia a copy of the film “Bridge Too… Read more »

Thank you for including the distance scale! Great work!