The first humanitarian corridor has begun to work in Sumy. Mariupol is reaching a critical stage and Russian forces continue to regroup its forces in order to attack regional capitals. 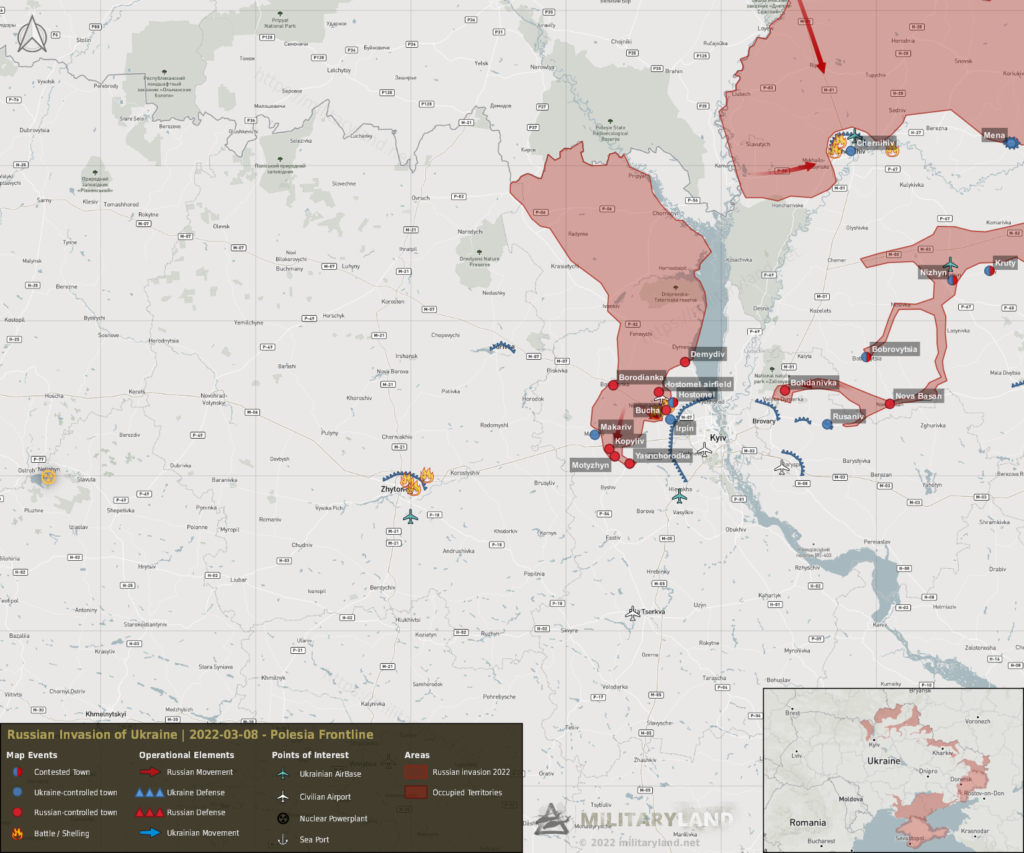 On the right-bank of Dnieper, it’s confirmed Russian forces are in control of Borodianka, Kopyliv, Demydiv and they also entered to Bucha. Despite heavy losses in manpower and equipment, Russian troops were able to capture Yasnohorodka.

On the left-bank, Russian forces entered Bohdanivka and setup positions on the highway M-01 (Kyiv – Chernihiv).

Another strike was reported near Zhytomyr, but no details has been published yet. 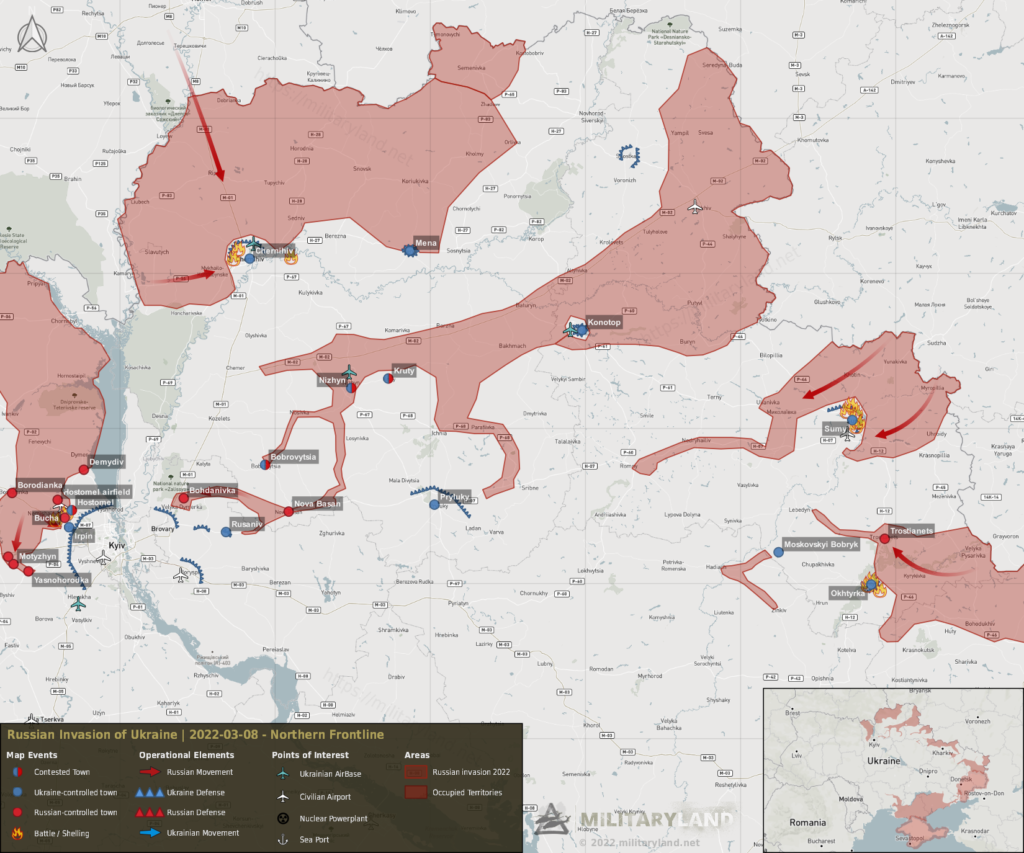 Russian forces tried to assault the city from the east, but Ukrainian defense repelled the attack.

A humanitarian corridor has been opened today and civilians were able to leave Sumy. About 3 500 civilians used this opportunity. 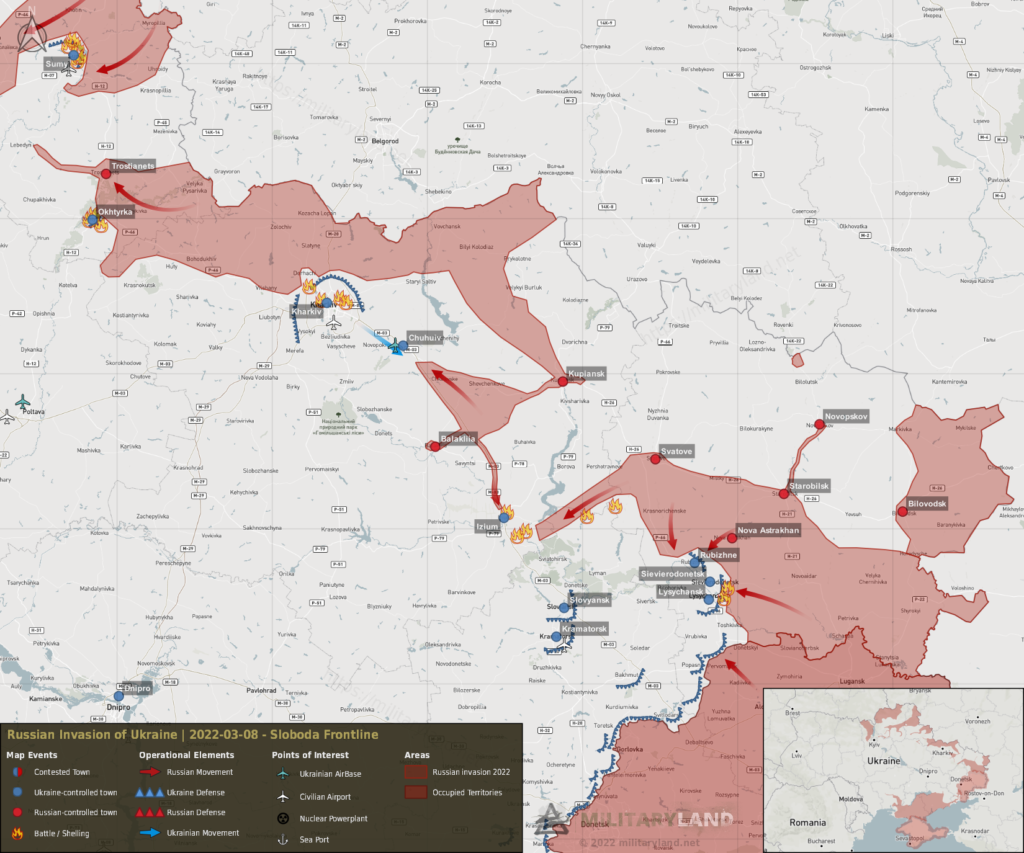 A Russian assault group of about 120 soldiers landed in Vovchansky district by three helicopters and tried to enter the city. Ukrainian response was quick and, together with Territorial Defense Units, they repelled the attack. A dozen of Russian soldiers were killed, the rest retreated towards the Russian border. The enemy continues to shell the city.

Difficult situation remains in Izium. Russian troops attempted to capture the town, but Ukrainian forces repulsed the attack. The town is without food, water, gas and heat.

Russian advanced elements reached Izium and Rubizhne, but both towns remains under Ukrainian control. Sievierodonetsk and Lysychansk are under the treat of being besieged. 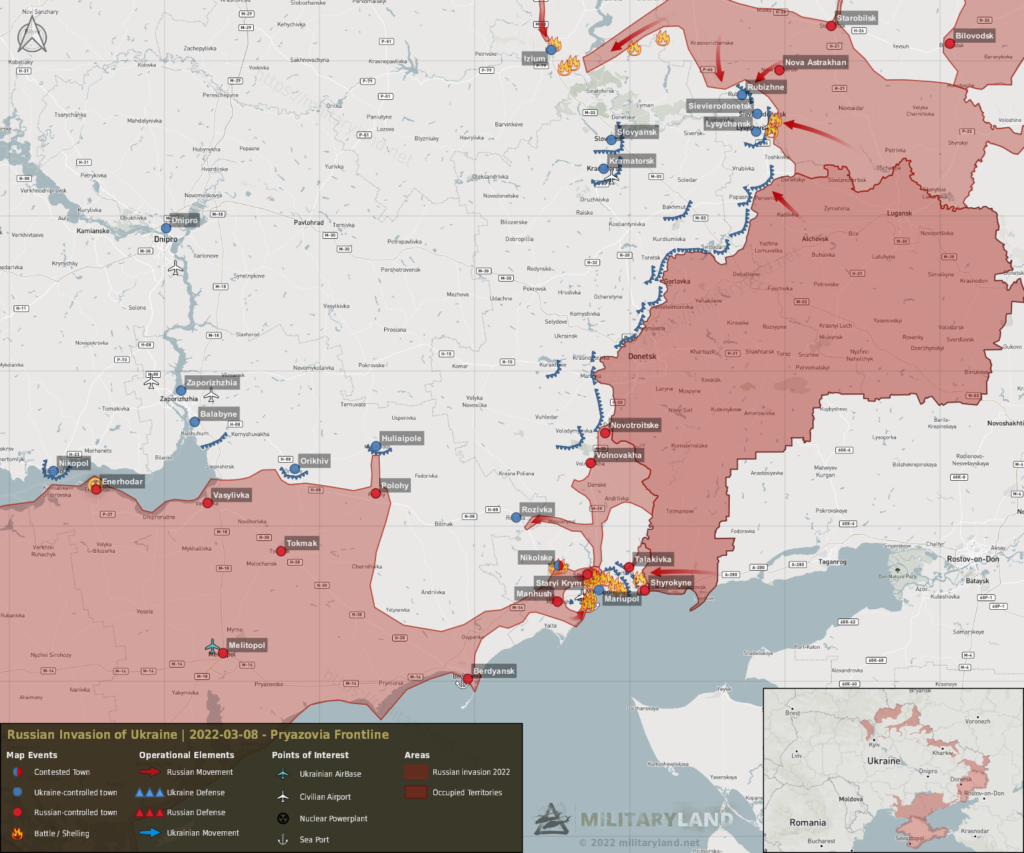 Russian forces continue to regroup its forces near Vasylivka and Tokmak. No gains or loses reported from this area. 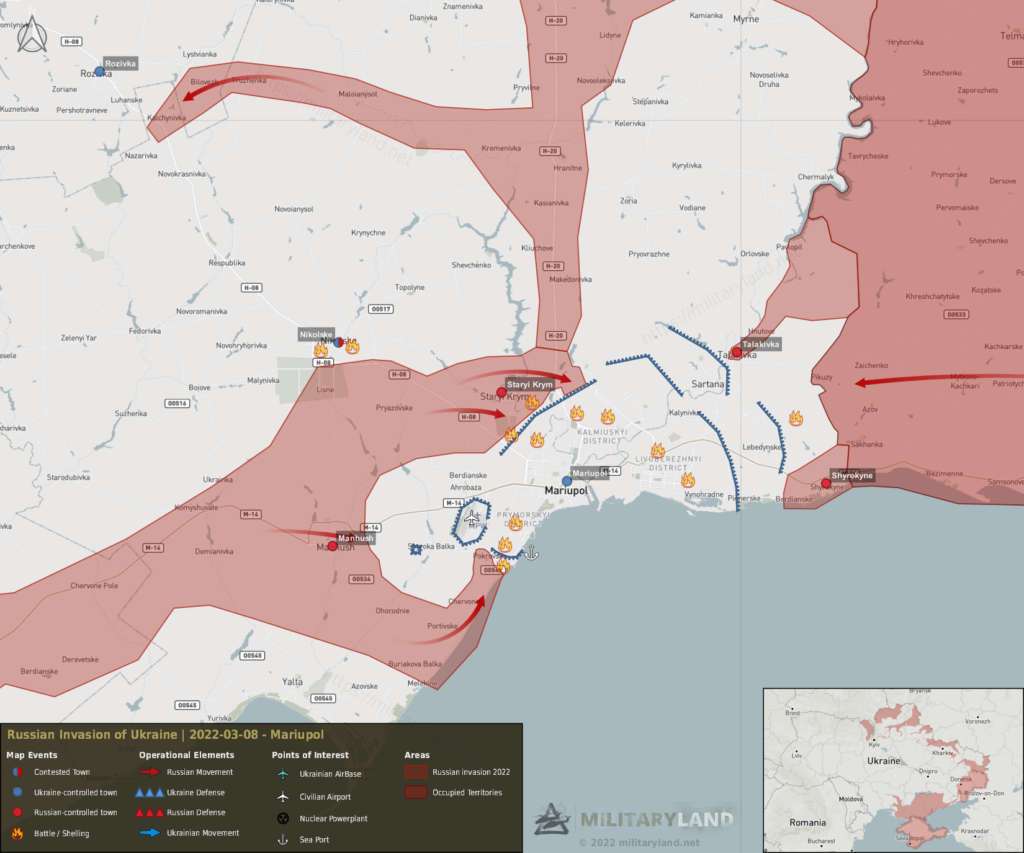 Ukrainian forces had to dismantle fortifications and demine the main road to allow civilian evacuation from Mariupol. Russian forces used this opportunity and assaulted the town from Stary Krym and reached the outskirts of Mariupol. In the west, Russian forces captured Manhush and pushed alongside the Sea of Azov to Pokrovske. The maneuver puts the Ukrainian forces stationed at the Mariupol airfield at risk of being encircled. The planned evacuation of civilians didn’t happen. 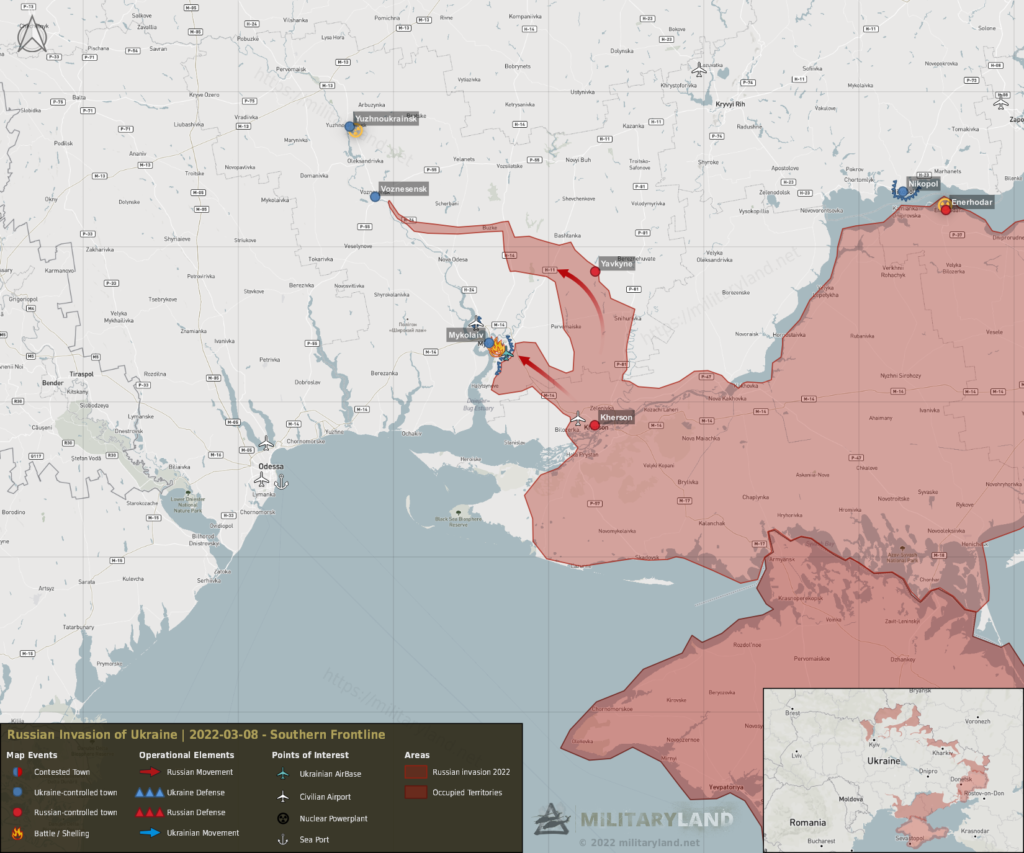 The night was relatively quiet. Russian forces are reportedly preparing a large scale attack on Mykolaiv. Ukrainian forces set up additional checkpoints, fortifications and are ready to defend the city. Additional Ukrainian reinforcements arrived to the city during the day and there are talks about possible counter-offensive towards Kherson.

Residents of Kherson came to the streets again to protest against Russian occupation. No military action has been reported from this area. 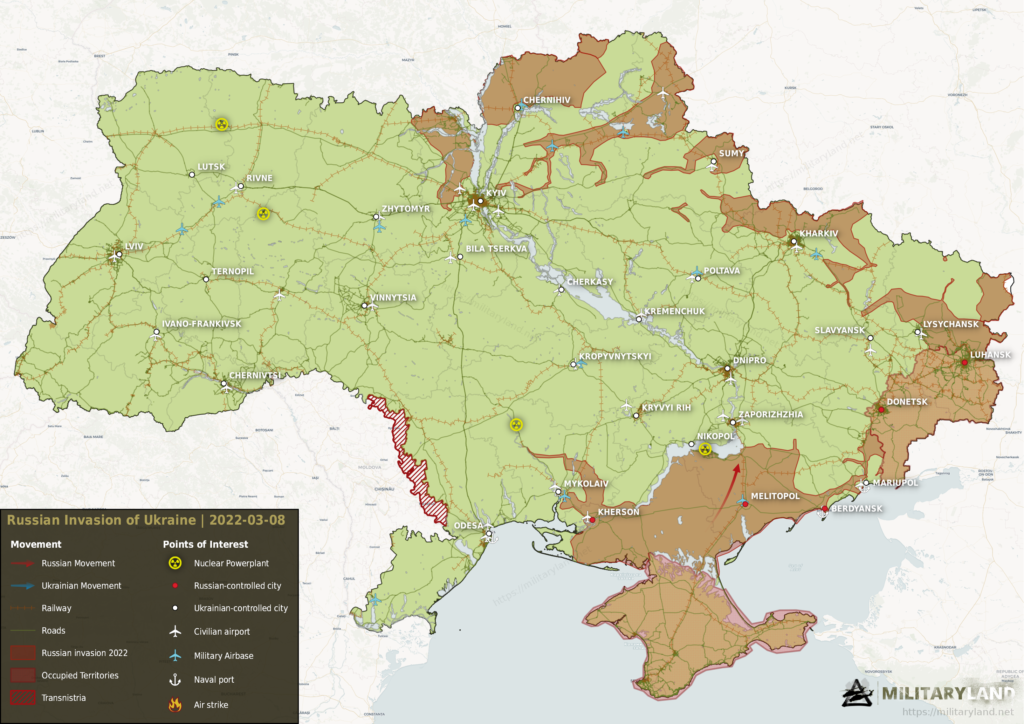 → Russia continues to regroup. → No large-scale Russian offensives expected in the next 24 hours, so expect another relatively quiet day. This lines up with the new ceasefire announced by Russians from 9:00 a.m. local time. → In Kyiv, Russia is massing forces near Irpin with new units arriving. → The entirety of the media is absolutely convinced that Russia has underperformed. In my opinion, maybe Putin was not so deluded about the capabilities… Read more »

Been following the daily report, thank you for all the detailed information.

Small question any info available about fleet movements by both sides

Ukrainian fleet has been docked since Day 1, rarely goes out. Russian fleet is near Odesa.

Great effort
You mentioned that there are talks about possible counter attack towards Kherson.
What are the units the Ukrainians have in the region that will be able to accomplish that offensive? And what are the possible routes?

Ukrainian 80th AirAssault Brigade is in the area and probably parts of 35th Marines Brigades as well.

Thank you for the great reports every day.

If it is not too difficult, would it be possible to add a distance scale to the legend? This would simplify to get a feeling of the actual proximity of the places.

Added to my to-do list. Thanks for the suggestion.

On the Deployment map, some Ukraine units are light blue, others are dark blue, what is the reason for that?

I believe the dark blue are territorial units (volunteer/reservists).

Correct. If you click on them, you’ll find out there are Territorial Defense units.