The summary of the twelfth day of Russian invasion to Ukraine, 7th of March 2022.

Today was relatively calm. Neither side gained a new ground. Russian forces are regrouping and preparing for a new phase of ground offensive.

Note: I decided to change frontlines and areas to respect more Ukrainian territory layout. It’s hopefully for the better. 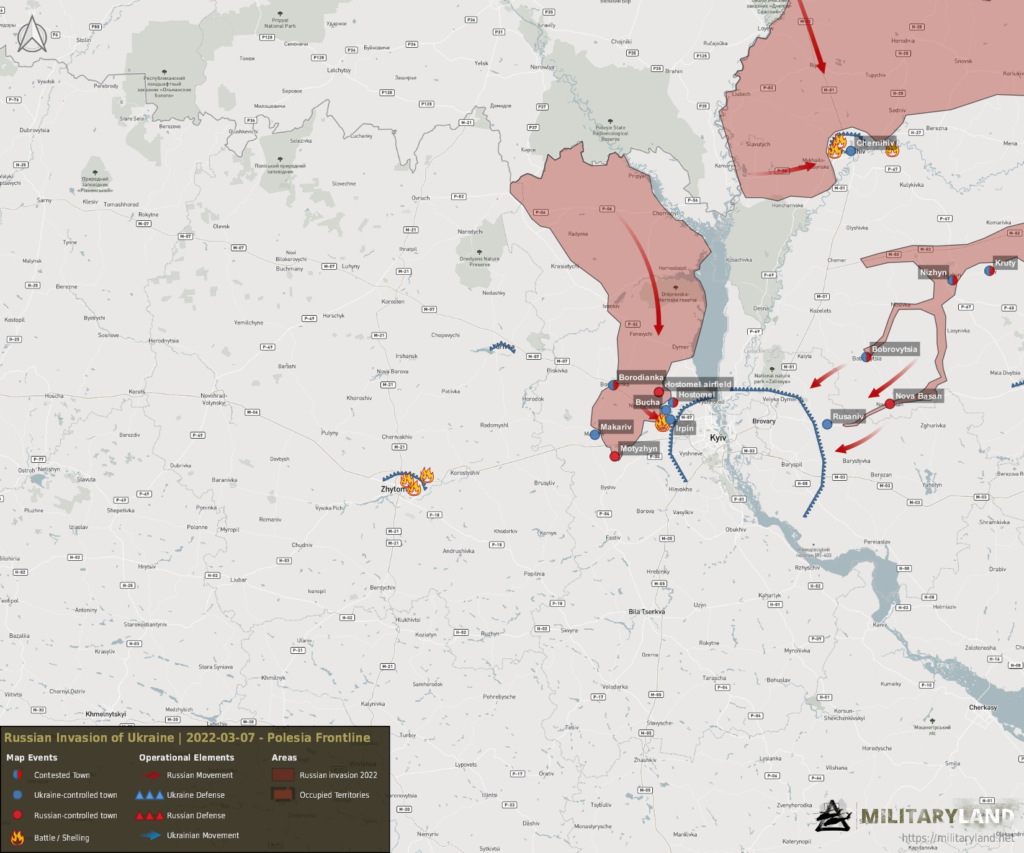 Russian forces continue to amass near Irpin, Chechen units arrived to the area as well. The time of attack on Kyiv is approaching. Ukraine reports enemy movement north of Brovary, but there is currently not enough data to geolocate them.

A Russian missile hit an oil depot near Zhytomyr and caused severe damage to the area. There are still some roaming Russian elements in the south of Sumy, but there is no visual proof to geolocate them. There are sights of upcoming offensive to besiege the city of Sumy. 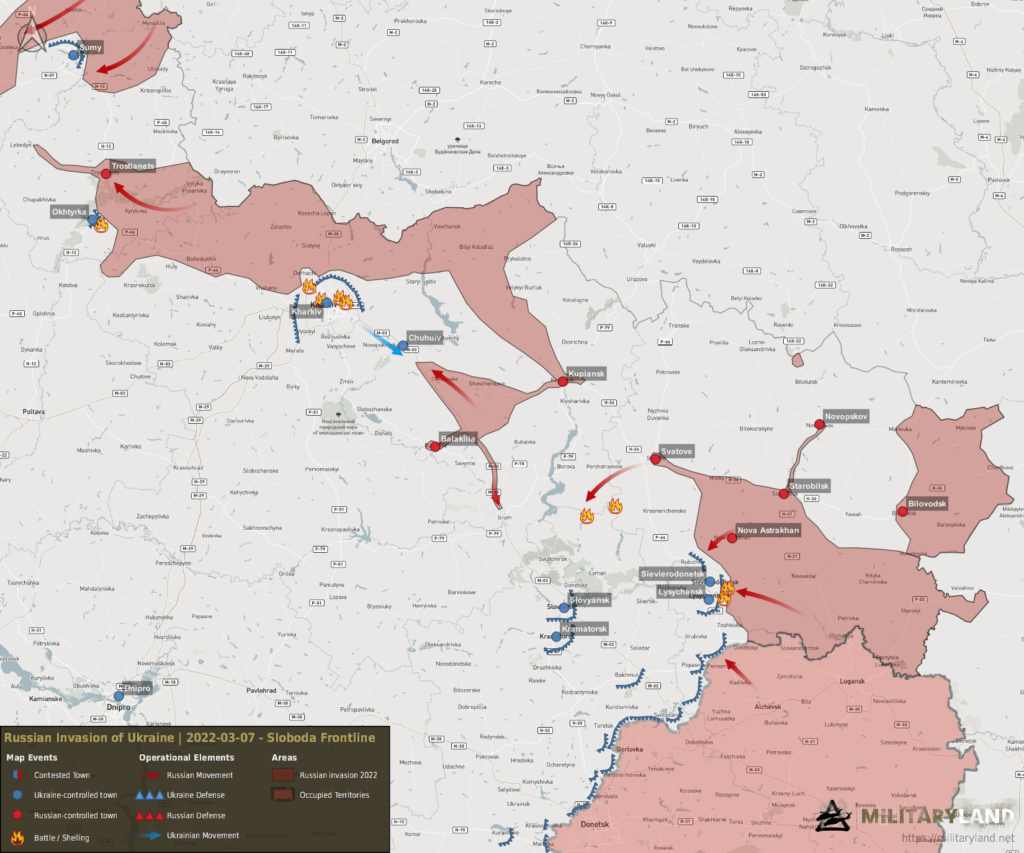 Russian forces are regrouping near Kharkiv and continue to shell the city. There are some roaming elements in the south, but we have no information regarding their location.

Russian forces are reportedly moving towards Slovyansk from Svatove. The enemy also tried to break Ukrainian defense lines near Sievierodonetsk, but wasn’t successful. 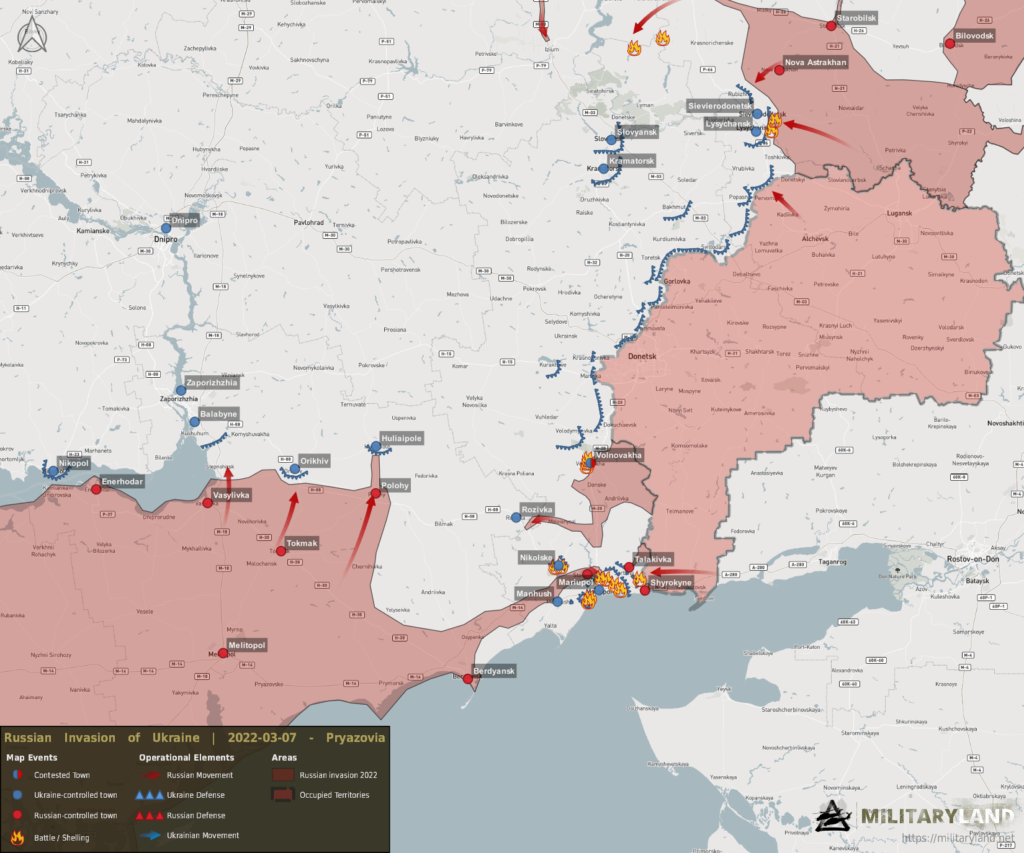 The report of yesterday’s counter-attack of Ukrainian forces near Mariupol was confirmed. The Ukrainian Azov Regiment destroyed several Russian vehicles and captured at least three T-72B3 tanks and one T-64BV tank.

Russian forces amassing its forces in direction of Zaporizhzhia. Ukrainian forces are preparing defenses to repel any attack on the regional capital. 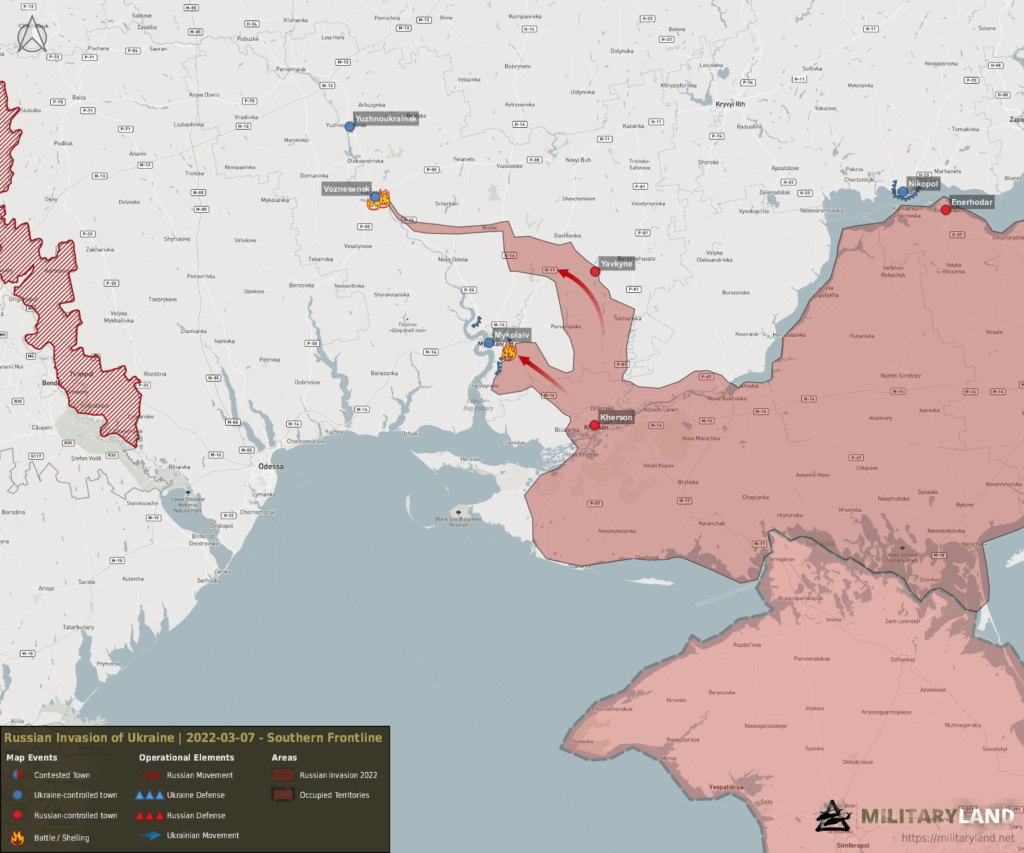 Russian Forces continue to attack Mykolaiv airport, but so far without a success. The main force meanwhile continues to move north towards Voznesensk.

Ukrainian artillery (or some say Special Forces) attacked Kherson airfield and destroyed several Russian helicopters stationed there. However, there has been no visual proof so far, only the reports of explosions from that area.

I decided to create a full map of Russian invasion with points of interests. I believe it’ll be a good addition to current maps and will nicely summary the ongoing Russian invasion. 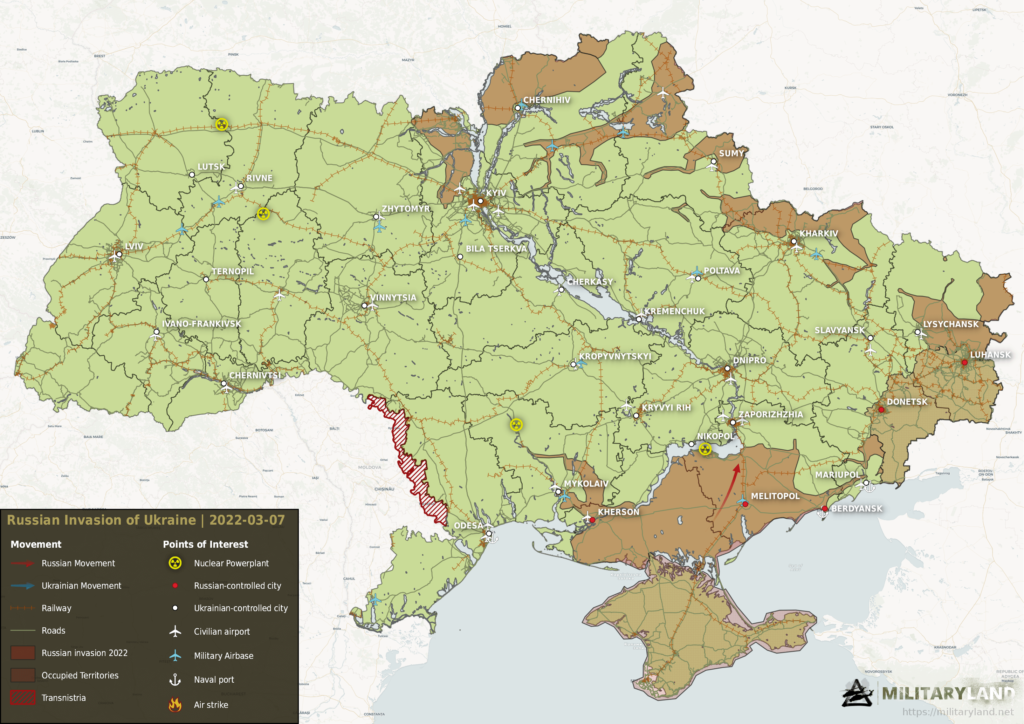 Hi, I join the congratulations to the authors of the site, I wanted to ask your thoughts on a UKRAINE-RUSSIA agreement, it seems possible to reach it on these points:

Thanks for the replies

In some limited form, yes, it might be possible. However, Russia crossed the red line here for most Ukrainians. They won’t give up a cent of their land now.

→ Russia is having an operational pause to regroup and accumulate forces.

→ The outcome of this invasion may well be determined within the next few days.

→ Russia thinks that the weak-link which drives Zelensky’s Government to surrender may be the people of Kyiv – hence the brutality and lack of concern against civilians there.

I like the Full Map but I think it’s easier to read in the original white/red color scheme with the bordering countries greyed out; probably easier for you to update too. Then you could just update the master map and then snapshot/crop out each of the fronts as needed.

Thanks so much for all your hard work. As a former US Army soldier who’s trying to comprehend unit movements on the ground, this site is indispensable. Bravo, good sir!

the local Force Russia is falling. their troops soon will be destroyed with out fresh delivered german panzerfaust3. soon the russian mamas will cry when they realite their sons are dead and already burnt by putin. and their economics will fall. we will take those russians everything. in comparison north korea will be rich.

Hey,
could it be that you forgot to mention the russian forces east of kiev?
Or did just nothing happen over there?
Love your work! I’m tranking it since day 1.
Thanks for your awesome work

Hello, nothing significant happened there in the past day.

Hi guys, thanks for this great content. I follow you daily.
Please could you highlight areas captured / liberated over the particular day in your maps?
It would be very helpful to see it.
Thanks again.