A dangerous situation has evolved south of Lysychansk. Russian forces captured Toshkivka and have advanced towards the road connecting Zolote and Lysychansk. Ukrainian troops stationed at Zolote are at danger to be encircled and Ukrainian command most likely now considers withdrawing its forces from the area.

Other areas remain without much change. Ukrainian forces have reportedly launched an offensive in Zaporizhzhia Oblast, but we have seen no evidence so far. 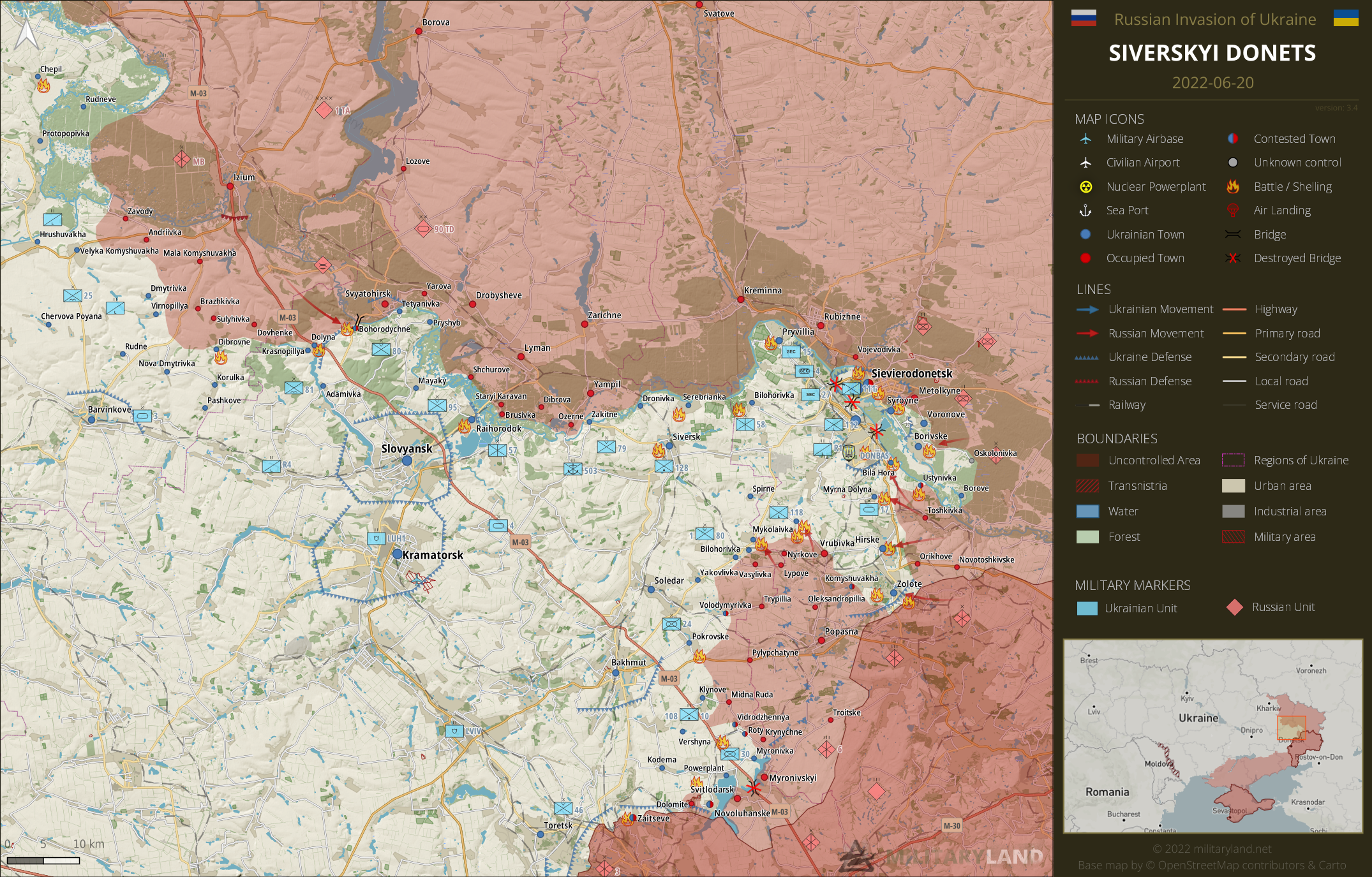 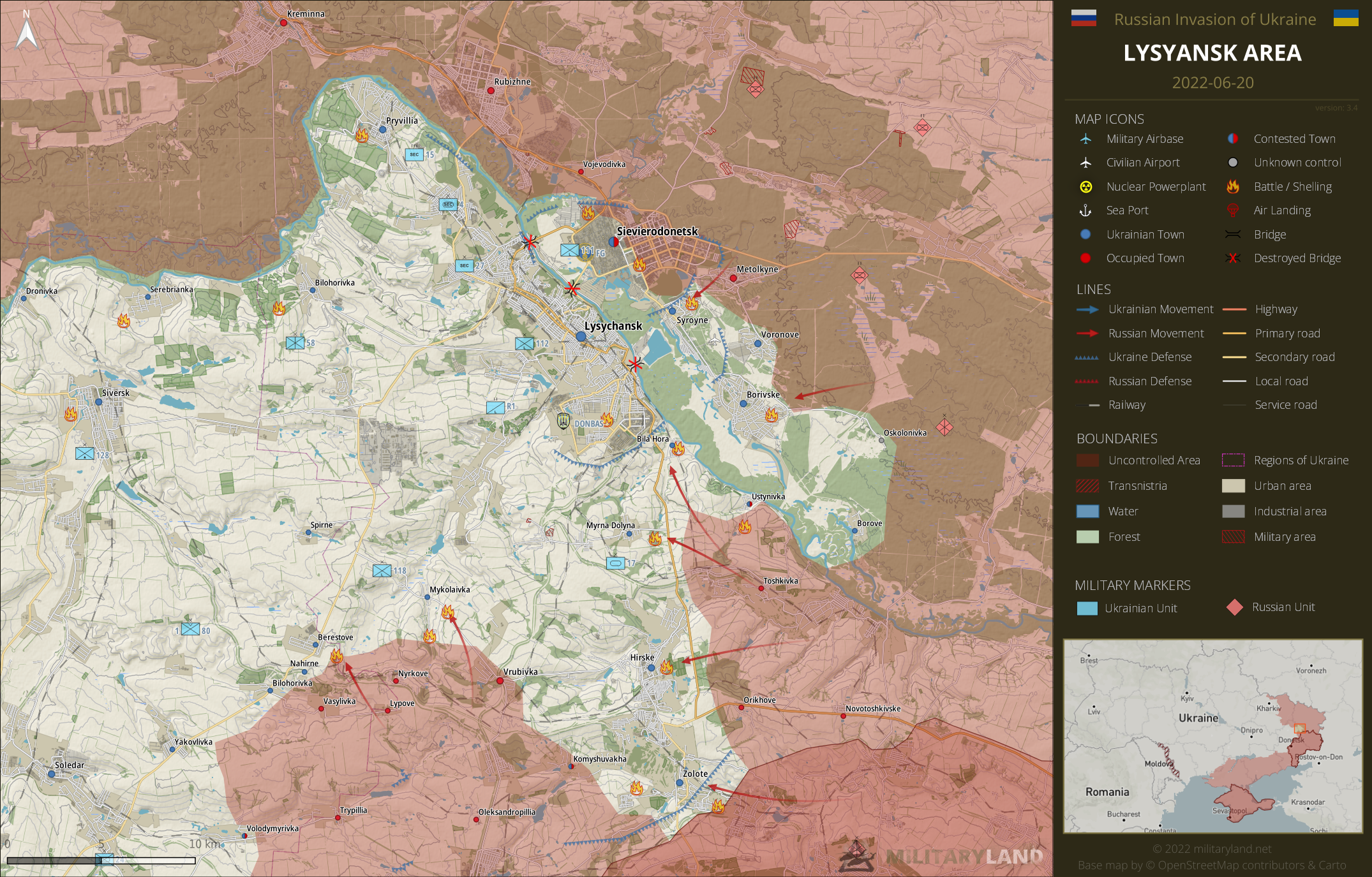 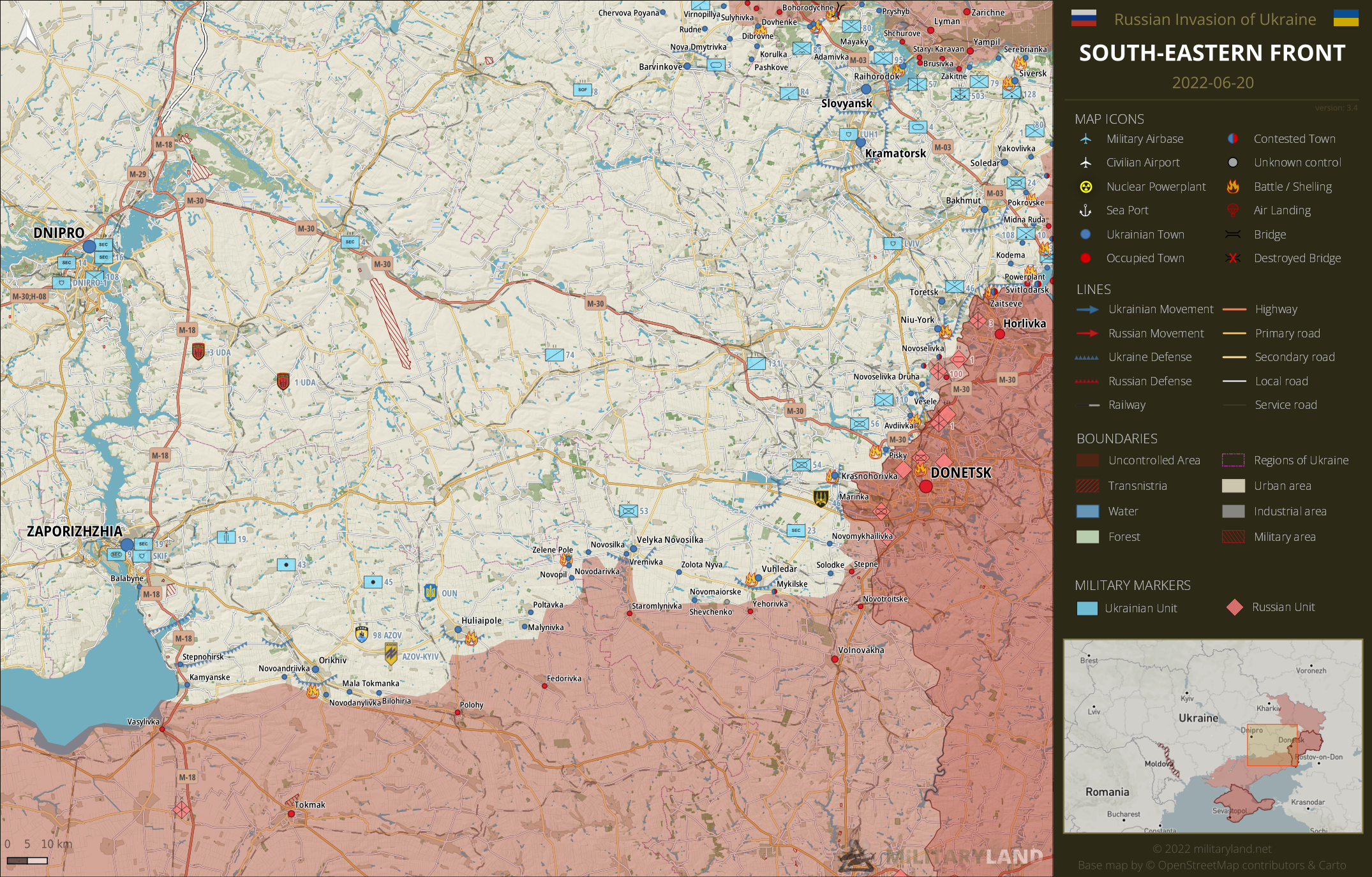 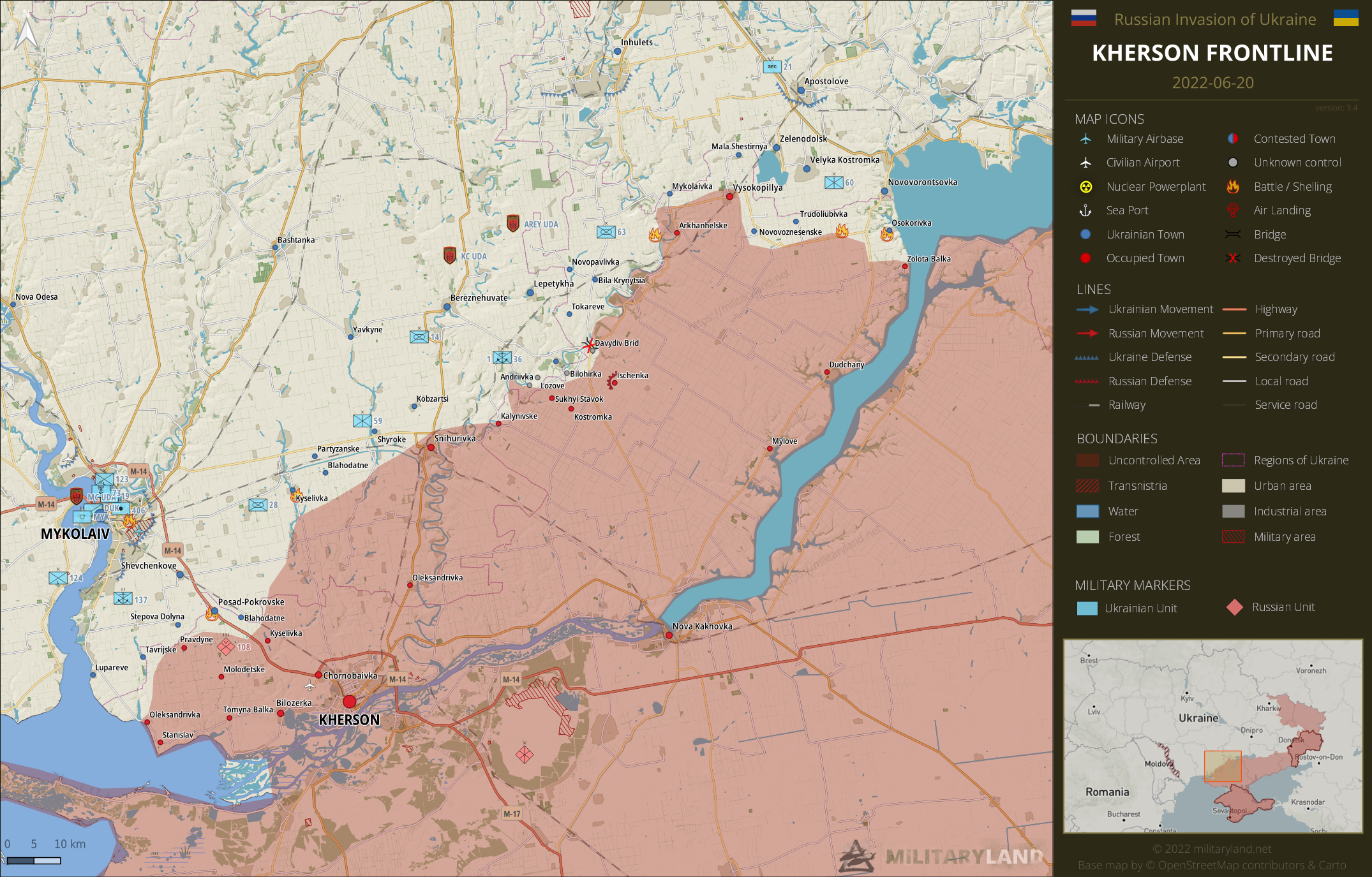 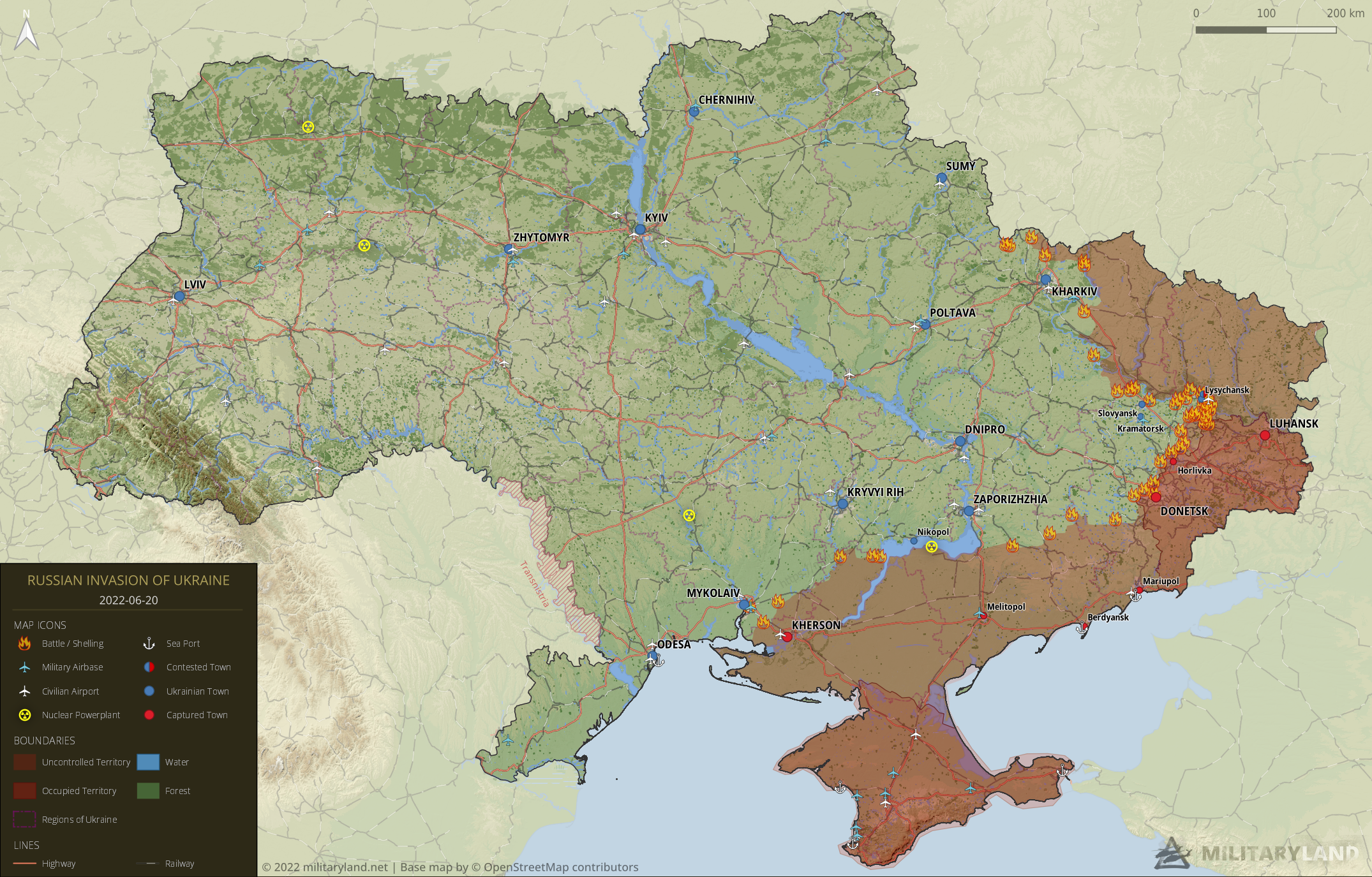 If the map is accurate, then T-13-02 could even be passable

No different ukrainian official source say regulary that the road is not passable. Russian still have fire control on this road.

The recent briefings of the UA MoD have remained silent about anything between Bakhmut, Zaitseve (of which there seem to be two), and Niu York, i.e. Novoluhanske and its powerplant, Dolomitne and Kodema. Which is surprising, as NASA FIRMS shows for June 20 quite some fires, usually associated with massive shelling, just north of Novoluhanske that should have made it into UA MoD reports if caused by the Russian side. The most parsimonious explanation is… Read more »

I dont follow this part of the front. But ua briefing mention shelling (i think with aviation, not sure) on new York regulary. Today and yesterday, they mention it.

First of all great work. Definitely one of the best places to get unbiased information about the war.
Just wanted to add a little information. If my translation is not incorrect, yesterday´s report from the General Staff of UA Armed Forces mentions that Pravdyne, in Kherson Oblast, was targeted by Russian artillery, which probably means that it is under Ukrainian control. Link below to the report. https://www.facebook.com/GeneralStaff.ua/posts/343208481325570

The report says in the area of Pravdyne, not directly the settlement. It doesn’t rule out the possibility of Ukrainian control, but it also doesn’t confirm it.

I’ve read it was taken, then saw Twitter accounts (UA forces in Kherson) saying they’d lost it. Now it sounds it may be retaken by Ukraine. In all, a contested bit of turf, so difficult to say who is holding it at any given period as by the time we receive the information the situation on the ground has shifted.