Russian forces regained some lost ground in Kharkiv Oblast and continue to attack Ukrainian positions in the area of Slovyansk and Lysychansk. 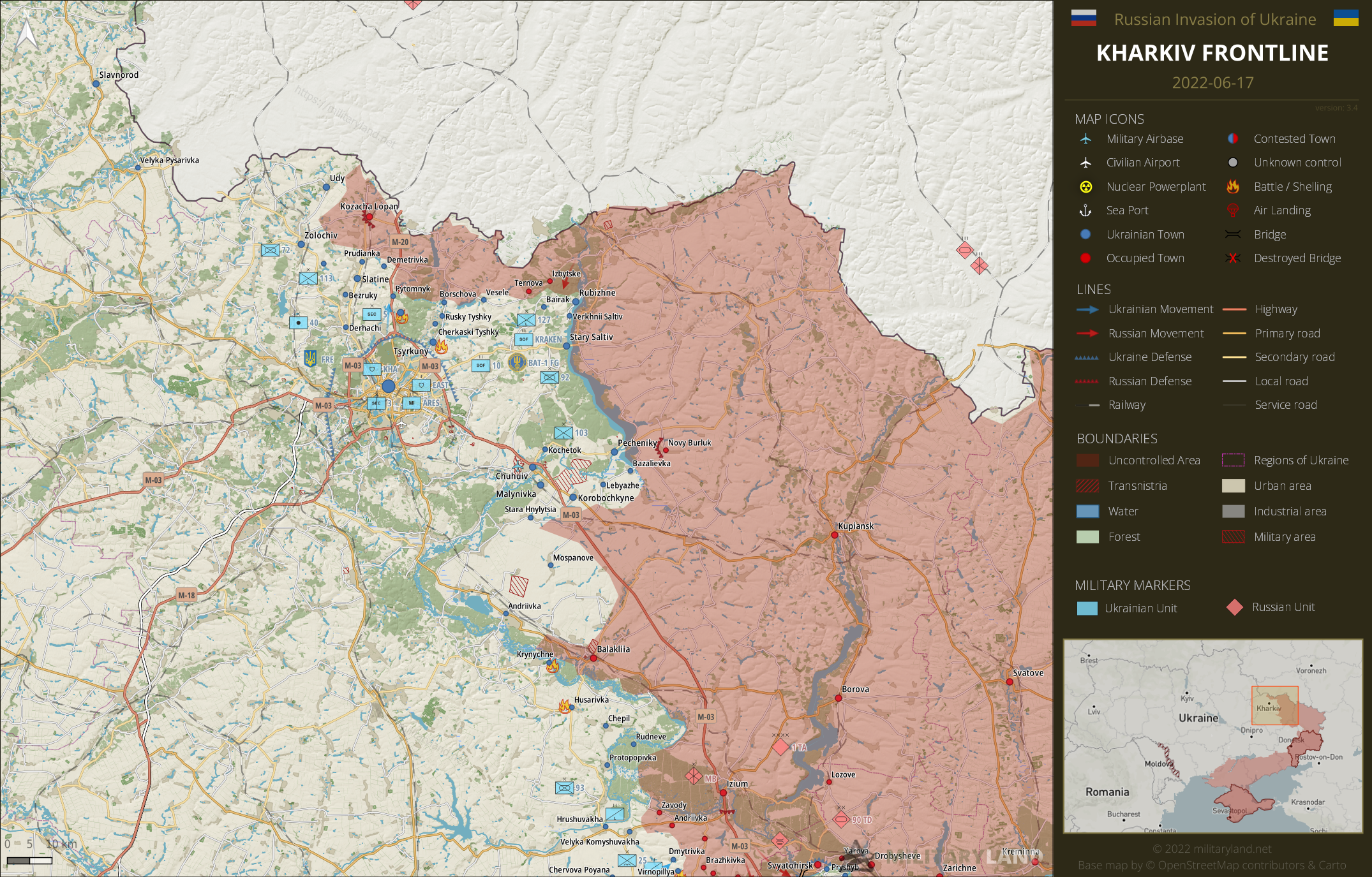 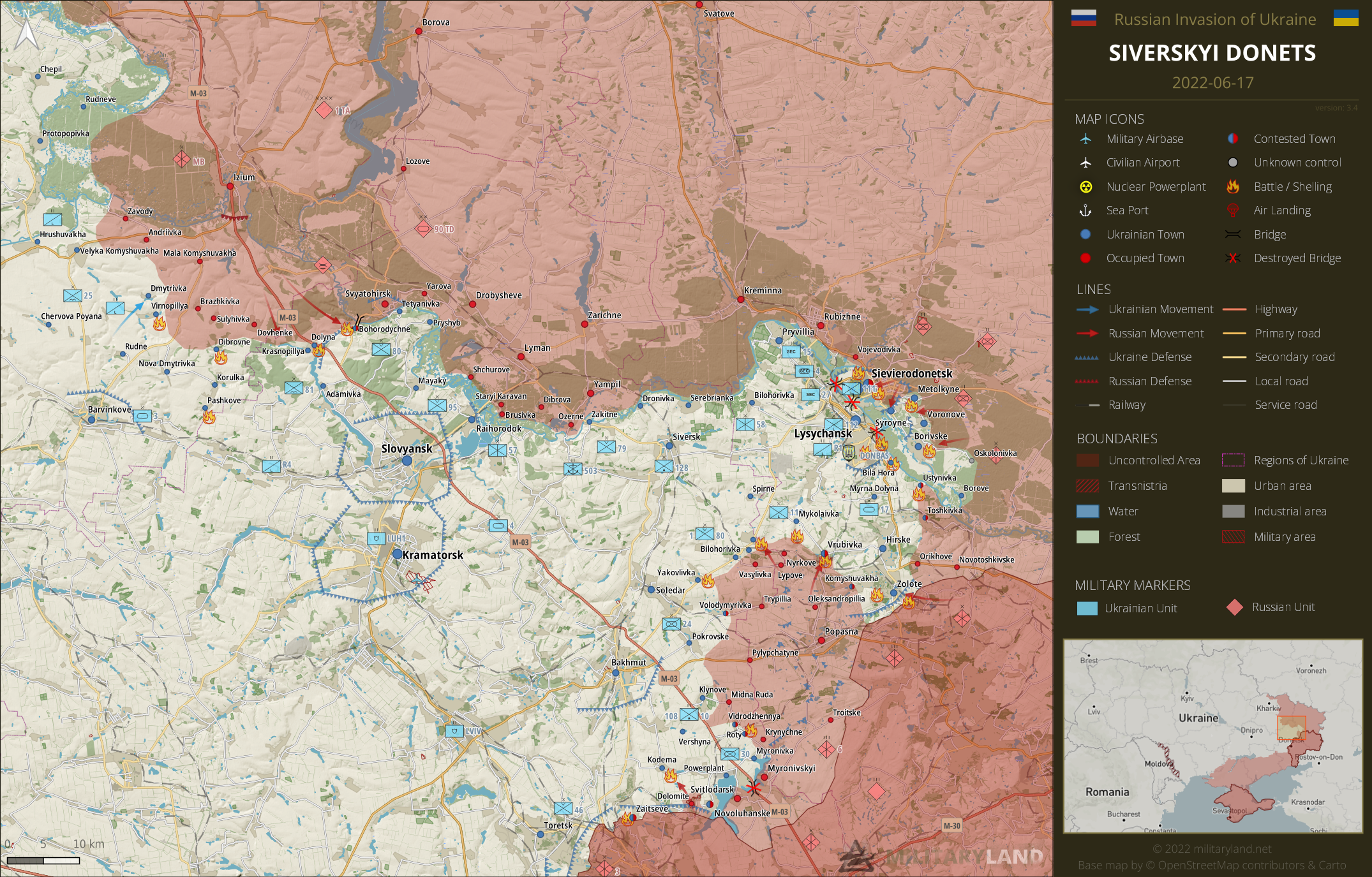 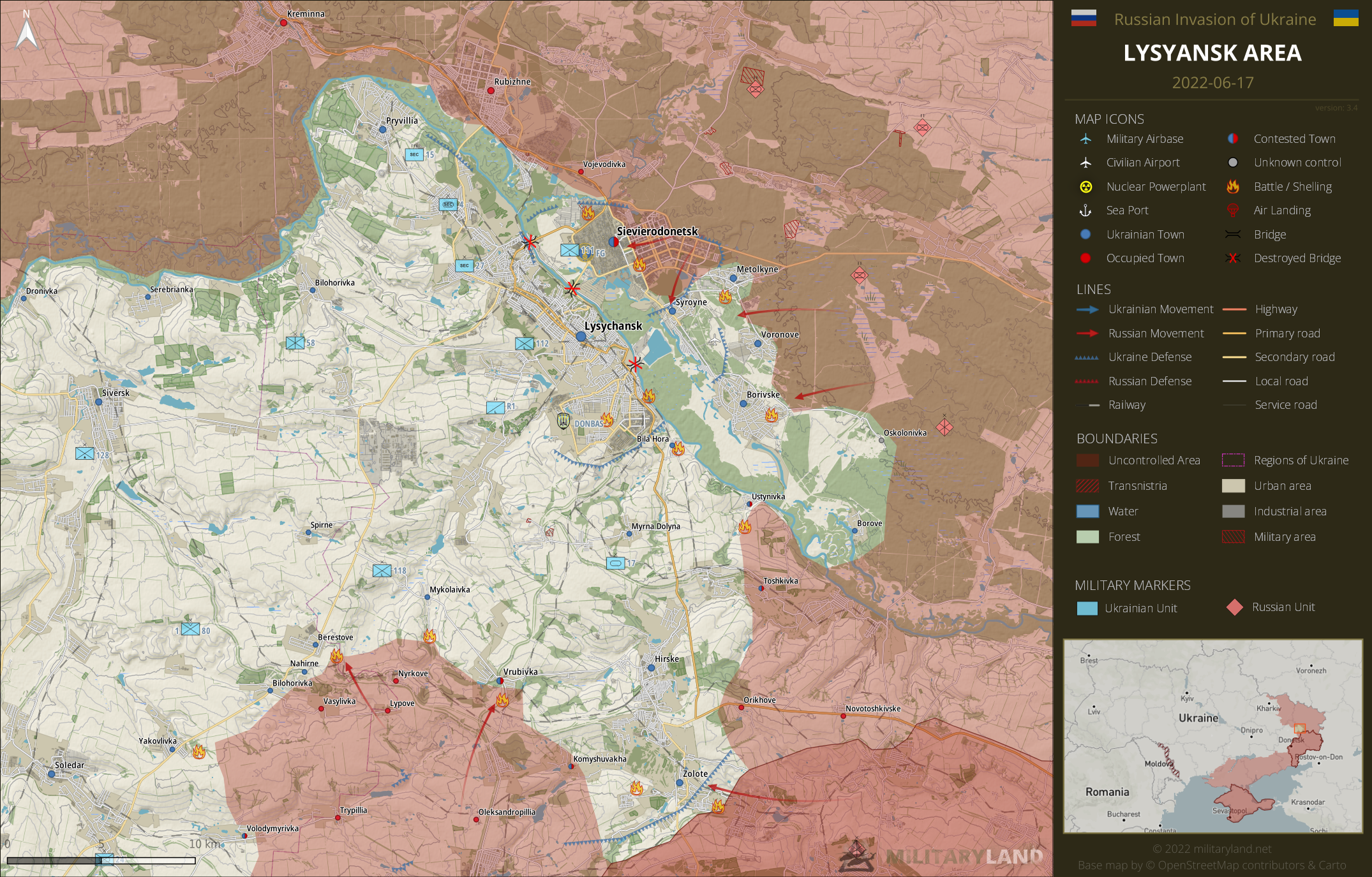 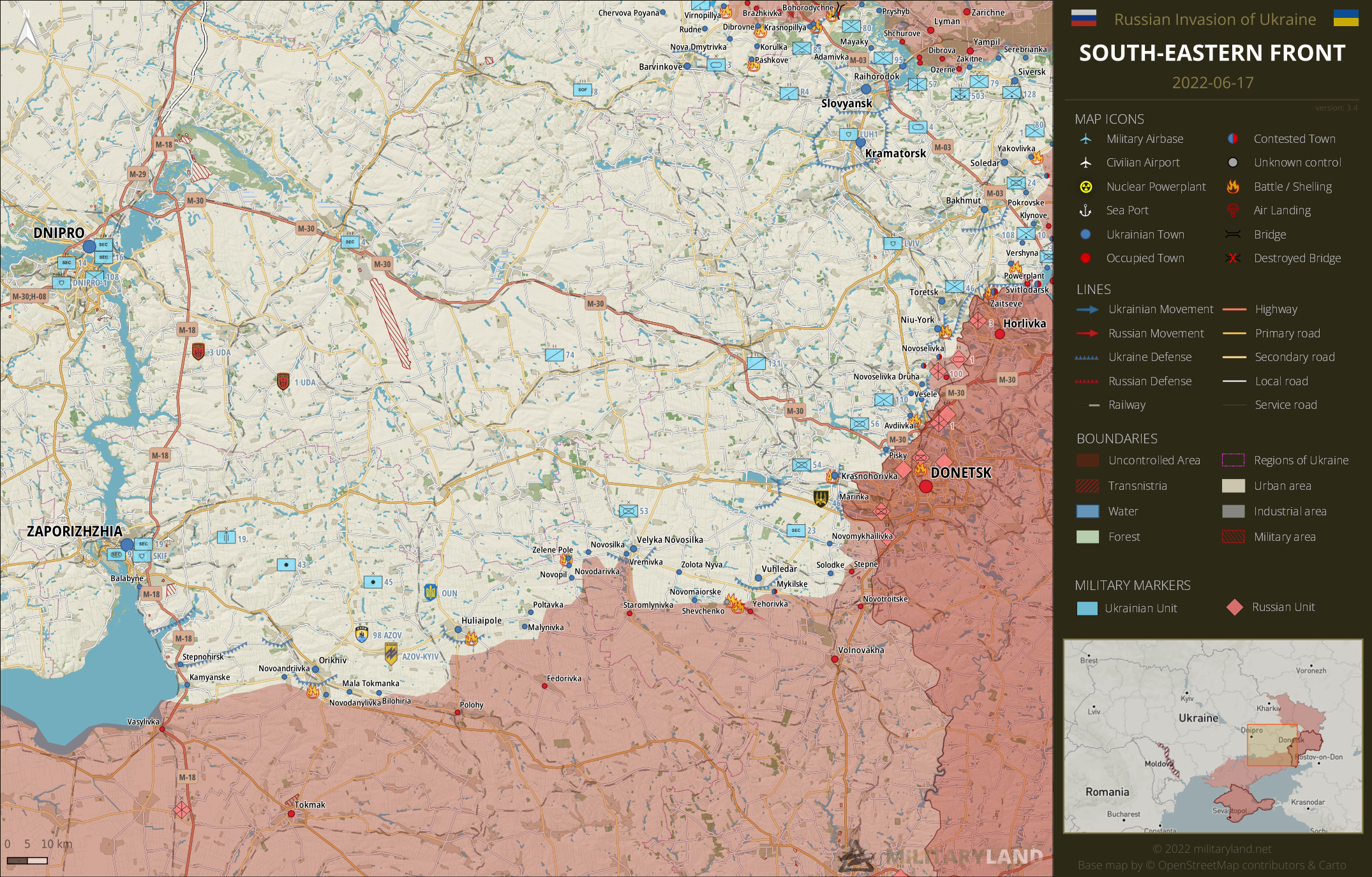 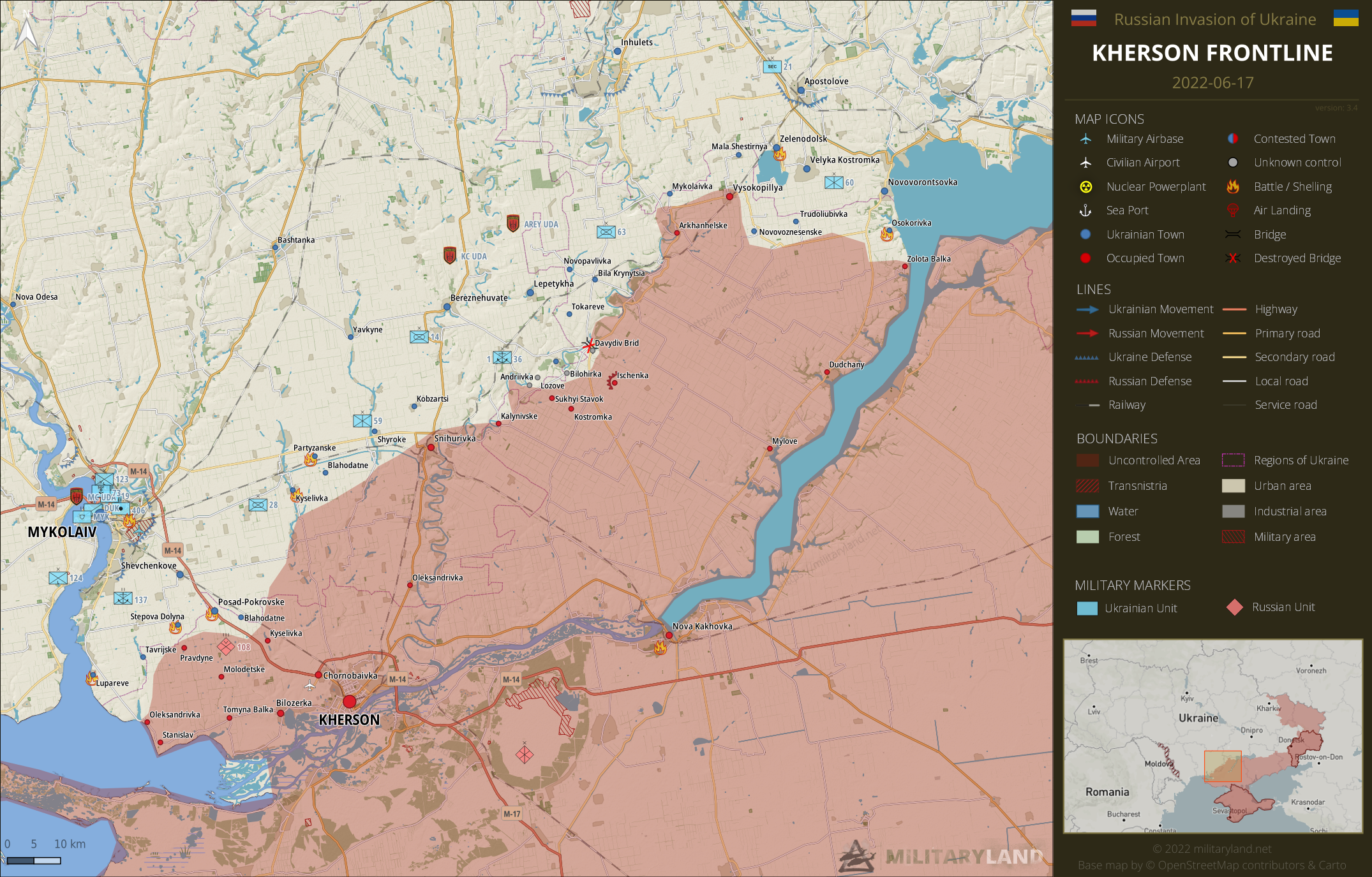 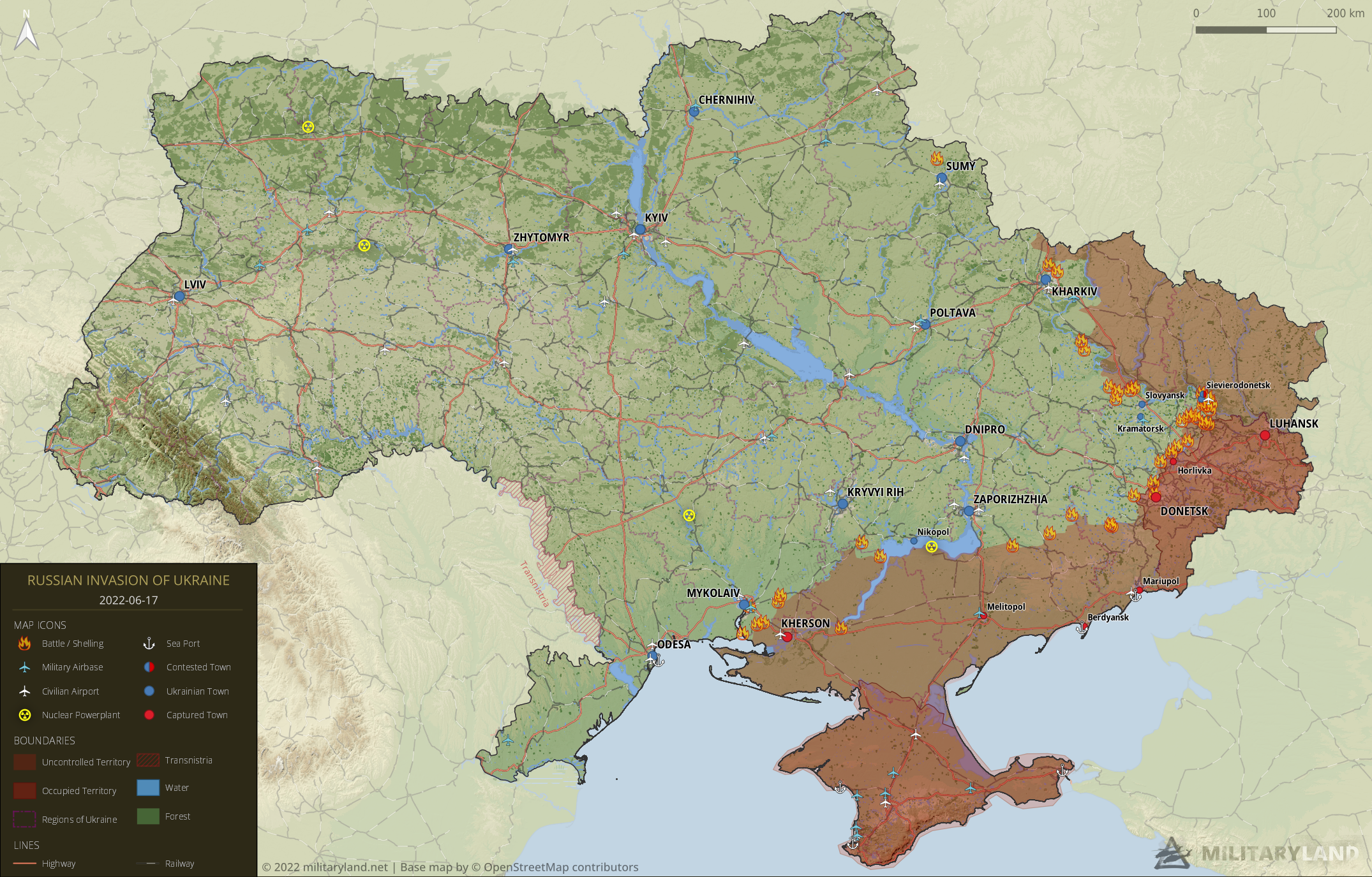 If my online translator isn’t deceiving me, pro-Russian channel Rybar has in its evening briefing reported some Ukrainian gains around Vuhledar, which would align well with your statement above: “Ukrainian reconnaissance discovered a Russian sabotage group between Yehorivka and Shevchenko. Ukrainian troops ambushed the group and forced them to retreat.” Here is the original statement from Rybar: Прибывшие части 44 оабр ВСУ ведут разведку позиций ВС РФ в Новоселидовке, Павловке, Владимировке, Никольском, Егоровке, Пречистовке и… Read more »

The “ambush” quote was from Jerome’s write-up above. Thought I had made that clear.

It might btw make sense to add some Ukrainian targeting of Russian ammunition depots to the maps. E.g. the linked one, in Zhereb’yanky area, Zaporizhia Oblast. Or the various strikes over the last days on Russian warehouses around Polohy / Voskresenka. And, of course, the recent strike on the ammunition depot in Krasny Luch in LNR. Could give some feeling of where the Russians might run into supply problems over the coming days. The same,… Read more »

Apparently, Ukrainian troops have retreated from Lozove and Andriivka in Cherson Oblast (which btw. appear a bit misplaced on your map, Jerome, you show them lying in Mykolaiw Oblast) to the western bank of the Inhulets. However, it remains unclear when the footage linked below was taken.

https://www.nationaldefensemagazine.org/articles/2022/6/15/ukraine-to-us-defense-industry-we-need-long-range-precision-weapons Interesting interview from the United States with General Volodymyr Karpenko, Logistics Commander of the Ukrainian Ground Forces Command. to which Ukraine’s urgent need for artillery and artillery ammunition is once again highlighted. on the other hand… for 10 years i followed the war in syria closely, after 2015, when russia fully entered, the coolest and most modern drones that russia possesses played a very important role on the front, especially in the rear, without… Read more »

Dont know what you mean by Ukraine not being provided modern drones… The Bayraktar TB2 is a precision strike modern drone. And ukraine has been using those during this war non stop…

> Top 20 Countries with the most war volunteers in Ukraine:https://www.youtube.com/watch?v=XPl1hJdSyxY

The zoom on the maps is completely off for me. I have to hover outside of the actual image to hit the right area to zoom in. Using Firefox on desktop.

Last edited 7 months ago by Oskar
0
0

For weeks all the talk has been about how Sievierodonetsk is somehow a “key” city that will decide the fate of the Donbas. But since that battle really kicked off it has been pretty obvious that the Ukrainians are fighting a grinding, attritional battle there to occupy and degrade many of Russia’s remaining combat forces. It keeps getting reported as “critical” etc but, meanwhile, Ukraine sends fresh forces elsewhere instead of to that battle. They’re… Read more »

It’s not a critical town for defense or the fate of Donbas, but a good opportunity to bleed out the enemy. If the situation worsens, Ukraine will retreat across the river. Lysychansk is much more important.

The level of water in the river Siverski Doniec is very low and it will be lower from day to day. I suppose UKR forces will have to withdrow one way or another. It is only a matter of time.

It doesn’t have much importance from military standpoint, but it has big symbolic value to both sides. It could affect morale of both sides. I think this is the main reason why Ukrainian side still defends it.

there’s only one operational river and only infantry can cross it. The other two bridges are destroyed. It’s not as easy as “Just leave”

Yeah, they reported it as some great disaster for Ukraine for days and ignored the fact that Ukraine was choosing that battle. Now after weeks in which their strategy has become rather obvious the press has moved on and pretty much ignores the fact that the whole thing is another gaping wound in the Russian army. The general public has the impression that Ukraine is losing badly. Even though there is about 5000 square miles… Read more »

Severodonetsk is not important, but “bleeding the Russian army” only makes sense if Ukraine doesn’t bleed even more in the process. Given recent statements from Ukrainian officials about very high losses, one wonders.

We wait the official russian losses. they doesnt talk about this, but they still existing. “only makes sense if Ukraine doesn’t bleed even more in the process.” No. Its not a game with the same number in each side. If ukrainian lose 2 men for one russian (not true if russia finaly mobilise in mass), at the end they will win. Simply because russian are in inferiorty (if we count the men mobilisated). But of… Read more »

I meant in proportion to each side’s forces. And it’s true that we don’t know much about Russian losses, but if they were comparable with Ukraine’s, Kiev would mention it instead of saying they’re outgunned 10 to 1 as they’ve been saying recently.

Sorry but “let’s let ourselves get surrounded and pounded to oblivion by the enemy’s much bigger artillery forces, because they’ll suffer losses too” doesn’t strike me as a particularly brilliant plan.

The plan is to earn time.

Each bomb who shell this city could not shell another city. Each troup here is not to another front. The principal offensive is since 3weeks on a city already destroy. This dont cost a lot to ukrain in comparison to the result.

Some say Ukrain army have regained Zavody. Is this not true?

Considering that there is video footage of Russian BMPs at the northern outskirts of Toshkivka already from June 13, and the town hasn’t been mentionned anymore in recent UAF briefings, its probably safe to assume it is now fully under Russian control. BlueSauronhttps://s.w.org/images/core/emoji/13.1.0/svg/1f441.svg on Twitter: “Today in Luhansk Oblast, the Ukrainian 34th Separate Motorized Infantry Battalion (of 57SIB) struck a building occupied by Russian troops, a BMP-1 nearby was destroyed while another 2 were damaged.… Read more »

Yes, you’re right, and I missed it. Thanks for pointing it out.