Russian forces crossed the highway near Bakhmut, putting Ukrainian defenders in the area under more pressure. The enemy also continues to shell border areas of Sumy and Chernihiv Oblast.

Other frontlines remains without change. 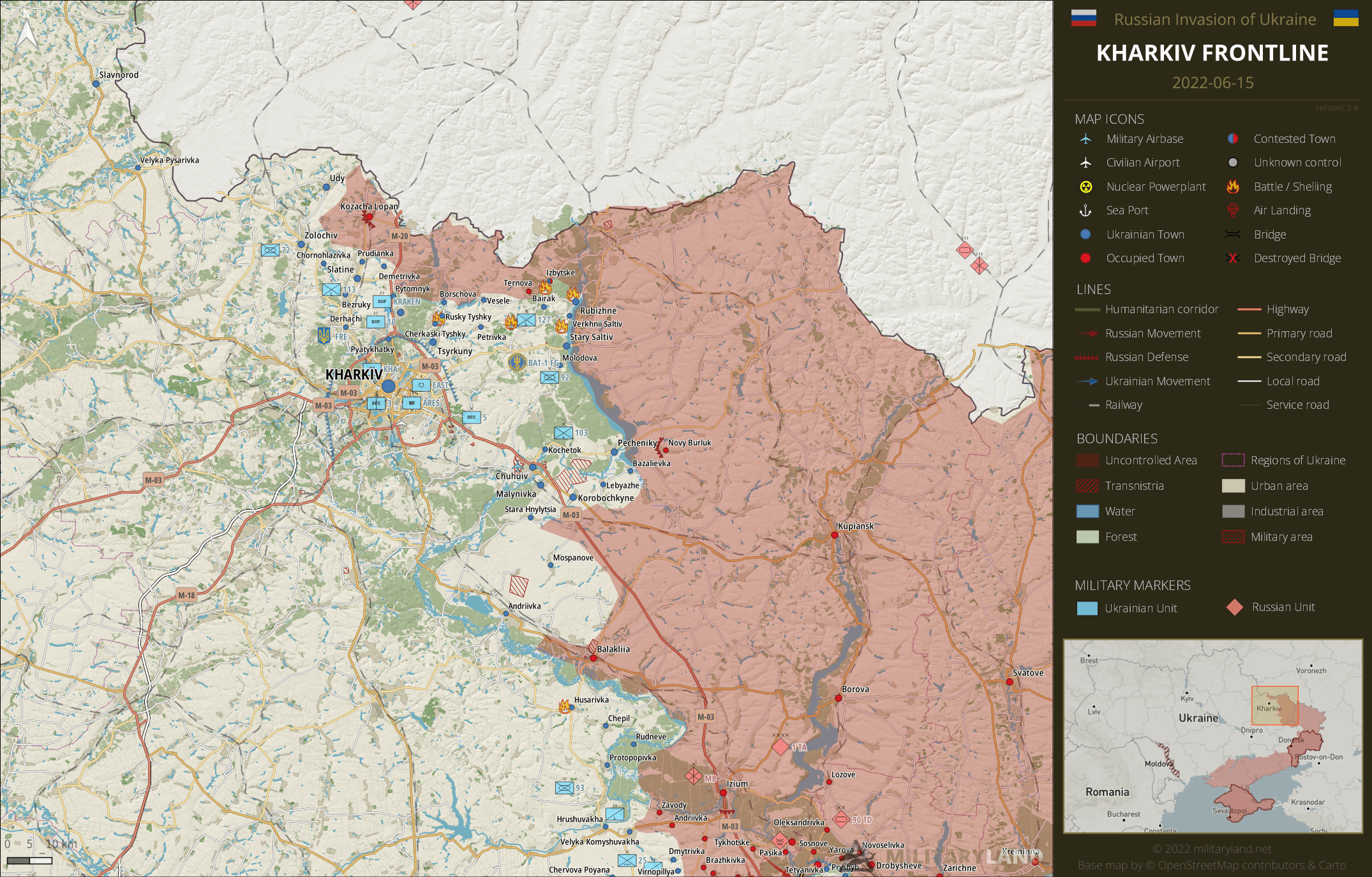 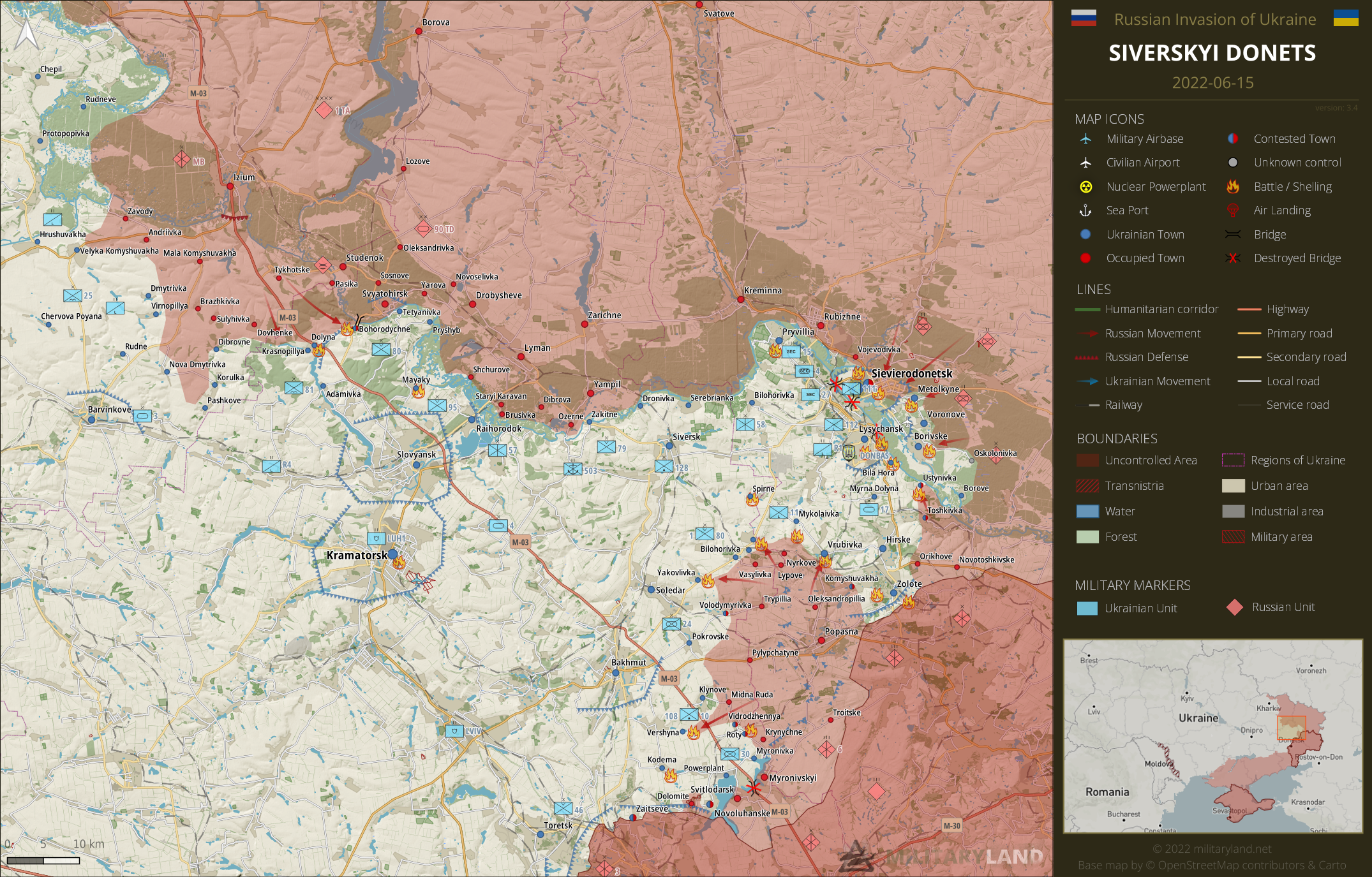 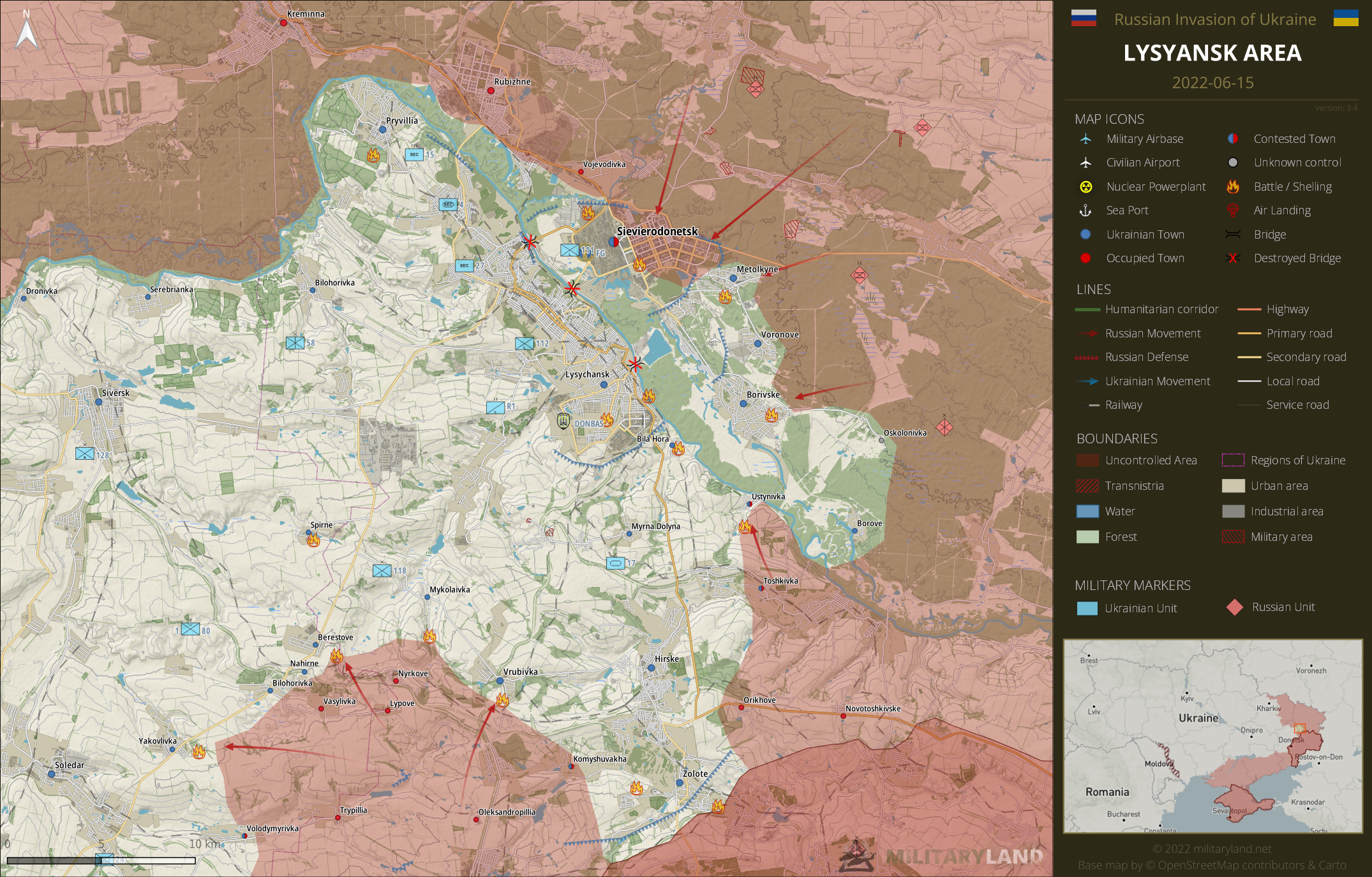 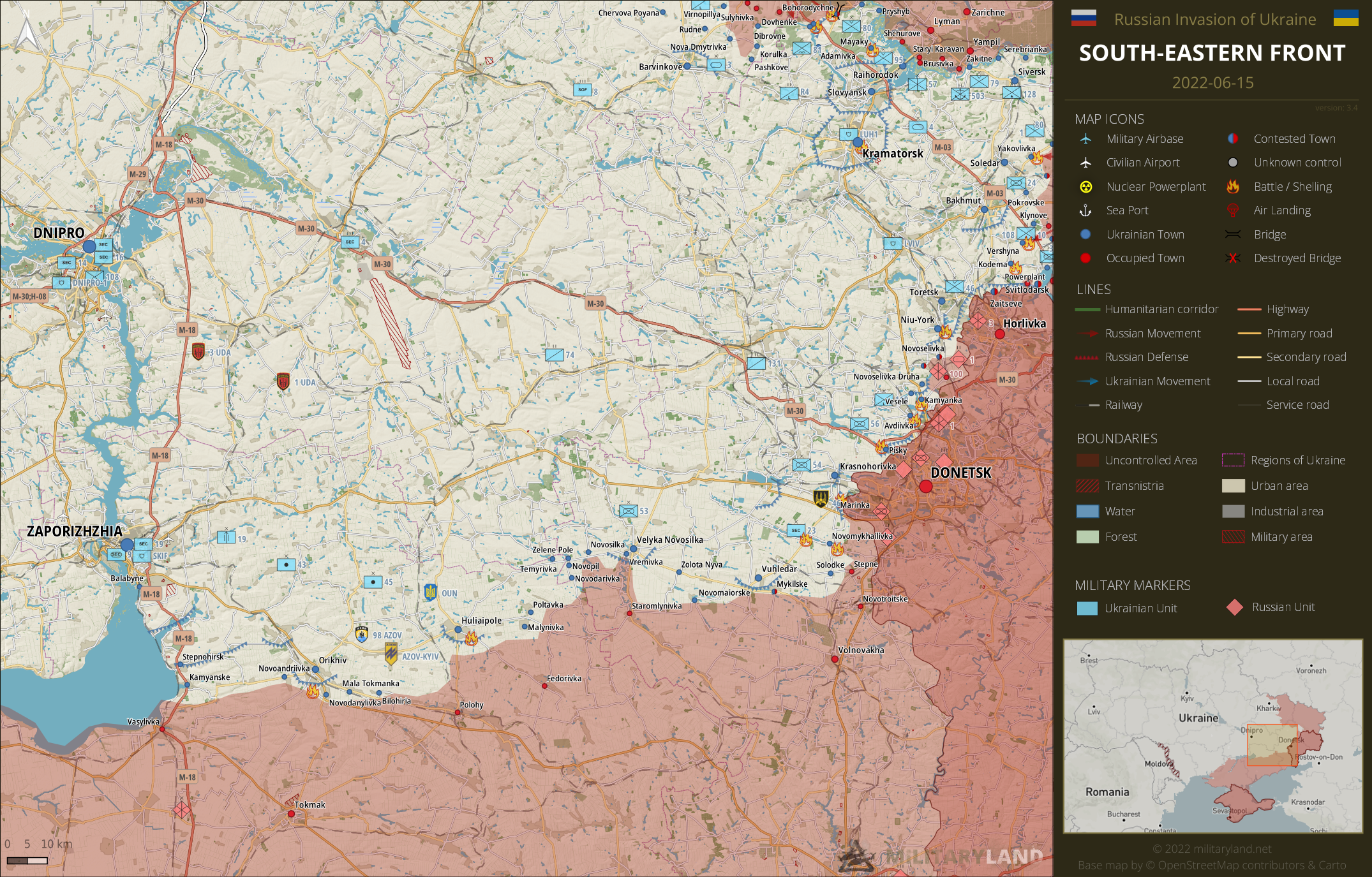 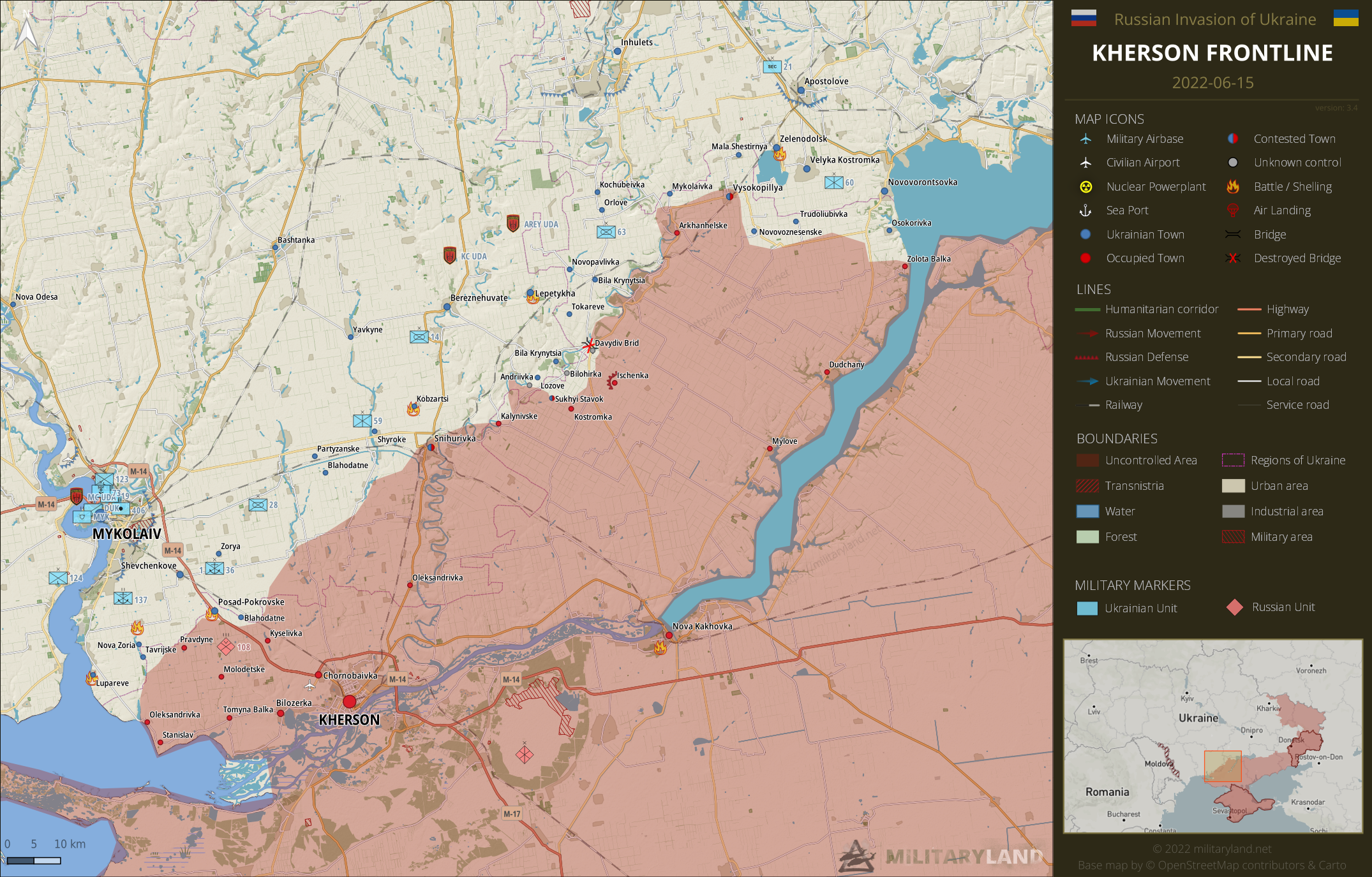 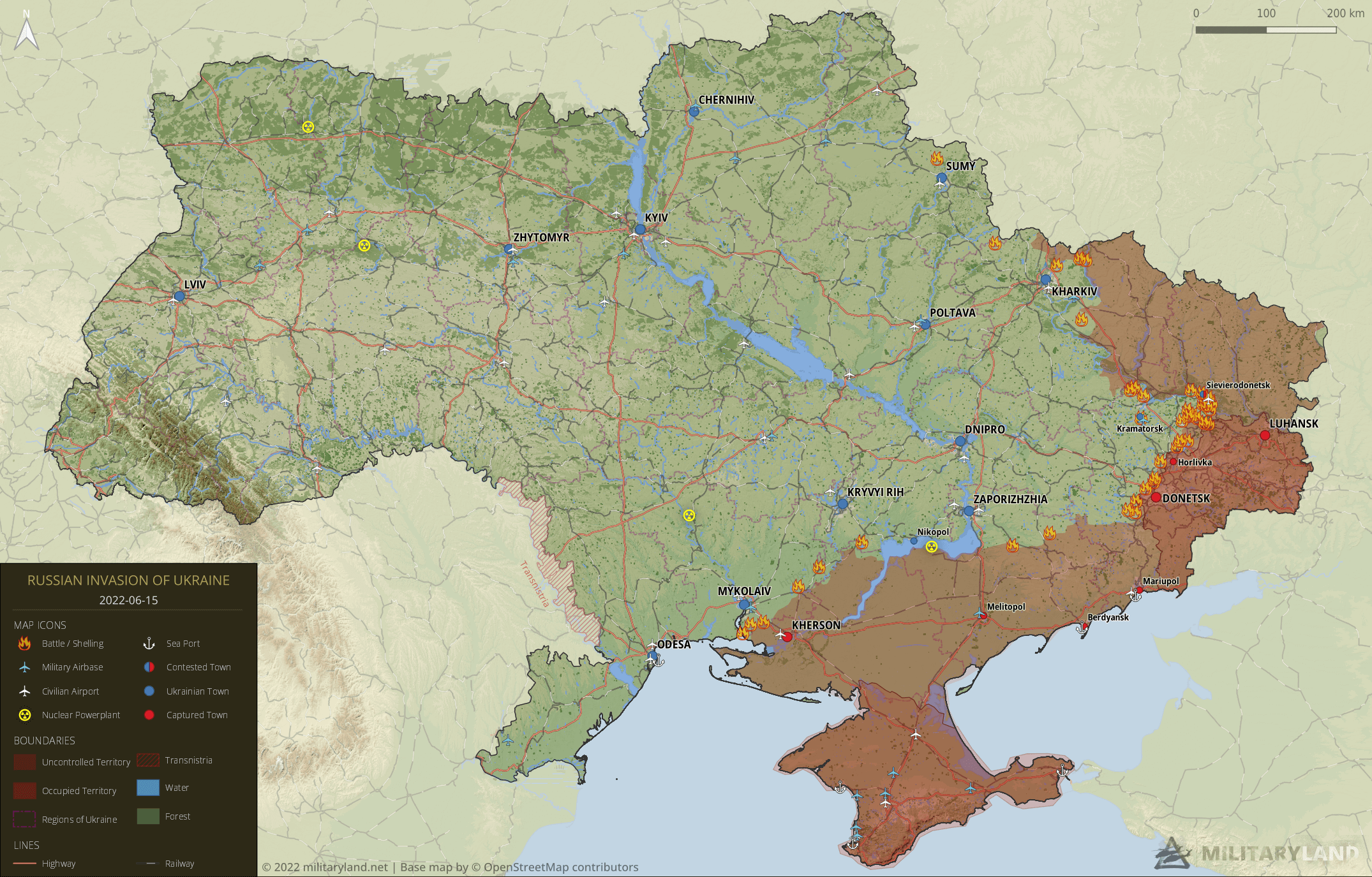 https://www.axios.com/2022/06/15/ukraine-1000-casualties-day-donbas-arakhamia
Interesting interview with a senior Ukrainian official in which he states that Ukraine loses about 1,000 soldiers daily on the Dobas front. He also claims that the sanctions against Russia have a low effect due to high oil prices, that their impact will be in 3-4 years, but the question is… Will Ukraine exist by then and will it be able to enjoy the show?

About low effect of sanctions – he refers to total income of russia. This doesn’t include the sanctions that are in effect right now – cutting them off from advanced electronics, closing of business etc. Their new cars won’t have ABS or even airbags, thats how deep in the shit there are now. Of course they can survive as a country, and make money from fossil fuels, but they won’t have ane spare parts for… Read more »

The effect of those sanctions also includes that Europe is running out of gas, Russia is already turning off the tap, and now we are in summer. For now, Siemens is refusing to send Russia the necessary turbines so that the gas can reach Germany. but now that we are in summer, will Europe be able to endure the winter without heating? Will Europe let thousands of its own die of cold to continue maintaining… Read more »

In my opinion, before winter comes, the war will freeze, Ukraine will be pressured by its partners to come to an agreement, sanctions will largely disappear, and the world economy will return to normal.

It’s going to be many, many years before (some) of the sanctions disappear and regardless there will a long term, permanent strategy shift away from Russian oil. As long as Putin is there the West will never trust Russia again, nor will any sensible western business thinking to invest in Russia.

The war begin with ” capture kiev in 3 days” , continue with ” sloviansk will fall soon , ukrain have to retreat immediatly to save his army.”

>> Will Europe let thousands of its own die of cold to continue maintaining sanctions against Russia? This is a non-sense, there are many other ways to get energy for heating (and other countries to get them). Try to be serious, I would accept that it will be hard and more expensive to get the ressources for this situation, but please, don’t use populist expression or the credibility of your future comments will decrease. Thanks… Read more »

You are massively exaggerating the actual situation w/r to gas in C. Europe. Figures below are for Germany: 55% of 2021 gas imports came from Russia. The remainder was from Norway (30%), the Netherlands (13%), plus some domestic production and pipeline import via Italy, ultimately from Lybia & Algeria. Purchase from Norway has already been increased. In addition, Germany will import LNG from various sources. Unsure about the total effect, but we’re possibly talking about… Read more »

really what is scary is that with global warming in full swing, currently suffering a heat wave with record temperatures in Spain, Europe decides to burn coal for energy

True. And avoidable, if Russia hadn’t started this senseless war.
Btw – I am curious how much CO2 has been produced by shelling, and inflicted fires, so far. NASA FIRMS has been showing quite a number of forest fires along the S. Donets over the last weeks, albeit bombed oil refineries, fertilizer plants, fuel depots etc. might have produced even more CO2.

Intercepted call records showed that some russian soldiers from the kuril islands had been sent to ukraine（Not to mention the army from Sakhalin and Kamchatka！）,who were reluctant to participate in the operation.Given that the ukrainian army has took a heavy toll on The Armed Forces of the Russian Federation，the Russians are now desperately in short of manpower.

Nice maps, I follow you for map updates and MILITARY LAB on YouTube for daily video updates. I recommend his channel for all interested viewers https://www.youtube.com/channel/UCRTq5KxoyKuquatzn2iF0Pg

Very informative! I must say of all the maps i look at, these are probably the most reliable ones and possibly even the most neutral ones. The other ones like deepstatemap are very Pro-Ukraine (it’s a ukrainian site after all), which is not a bad thing since you can be sure if Ukraine lost territory, because you know it’s ukraine. why would you lie about losing territory The other one i use is defensepoliticsasia but… Read more »

You have liveupmap who is good to. They generaly wait confirmation and correct mistake.

I’d advise to avoid sites with narratives ‘Bucha was staged by CIA and Ukrainians killed themselves” or “Ukraine bombs its own cities, Russia worries about civilians” or the whole “human shields” concept (after Bieslan, Grozny? rly? ) that means: DPA, Military Summary or all these Fix/Redpill/reactionary crowd (Lira, Jacson, etc.) They are full of Russian propaganda and bizzare speculations/theories, not mentioning hateful comments and outright genocidal narratives.