The summary of the eleventh day of Russian invasion to Ukraine, 6th of March 2022.

Russian forces seem to be gathering forces for a new offensive in the north to capture Kyiv, Sumy and Kharkiv, while other forces are continuing to push towards Zaporizhzhia.

Note: As Russian forces continue to advance, the current division into front lines is no longer suitable. I’ll take a look at the problem tomorrow. 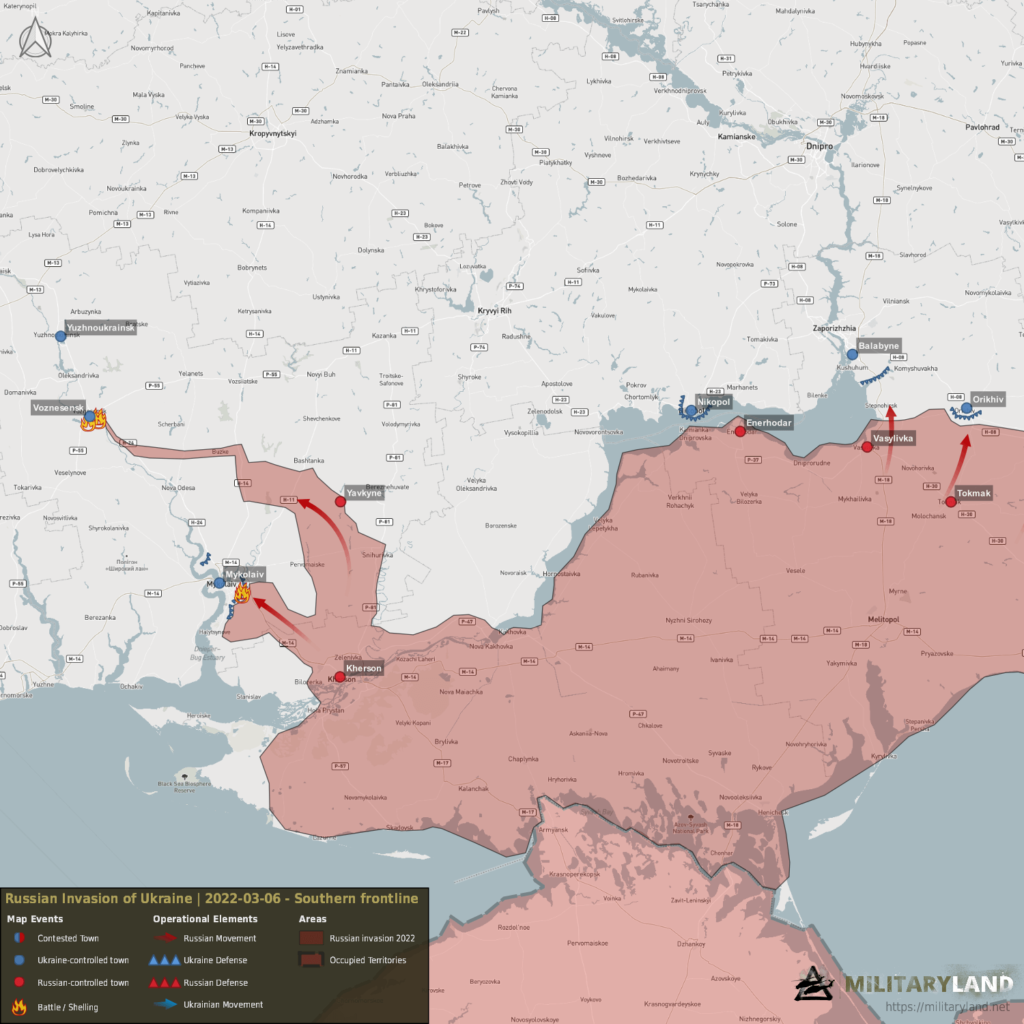 A small element of Russian Army unsuccessfully attacked Kulbakyne airport near Mykolaiv. Ukrainian forces suspect it was a diversion attack to attract Ukrainian attention to somewhere else, as a large amount of Russian equipment and troops are moving towards Voznesensk. Ukraine suspects Russian forces will try to break through the lines in the north and capture Yuzhnoukrainsk, where the South Ukraine Nuclear Power plant is located.

The fog of war has been cleared in this area, finally.

Tokmak has been abandoned by Ukrainian forces during yesterday. Russian forces pushed north and captured Polohy. The town is located on the strategically important road H-08, which connects Zaporizhzhia and Mariupol (please check the Donbas frontline map). Ukrainian forces are currently conducting defense operations at Huliaipole, Orikhiv and in the area between Vysilkva-Balabyne. 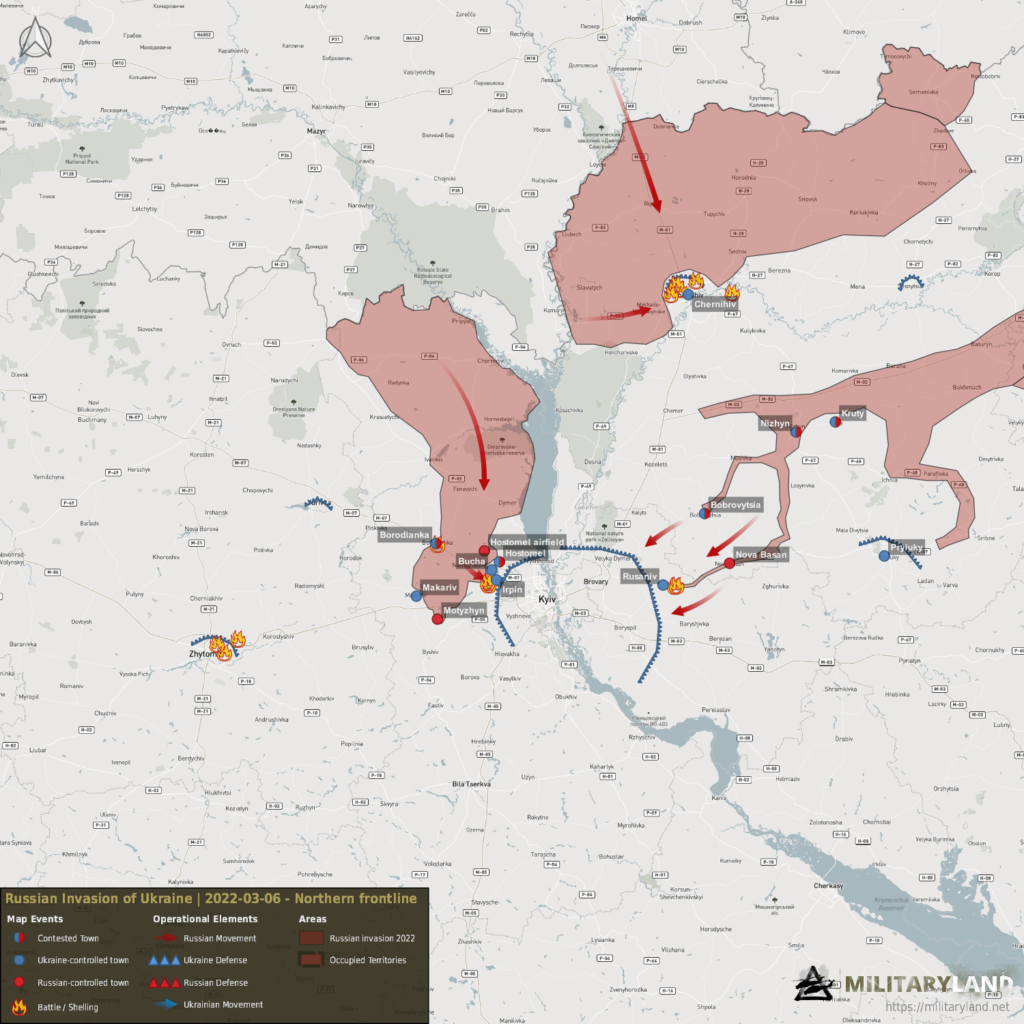 Russian forces continue to shell Irpin’s residential areas, while Ukrainian civilians are being evacuated. The enemy amass a large amount of equipment and troops outside the town. Russian mechanized, and tank battalions are on the move towards Bucha and Irpin.

Chernihiv defenses continue to hold on, despite heavy shelling of the area.

Nova Basan has been confirmed to be under Russian control. Ukraine also reports the enemy is approaching Brovary and Boryspil, probably from the direction of Nova Basan and Bobrovytsia. 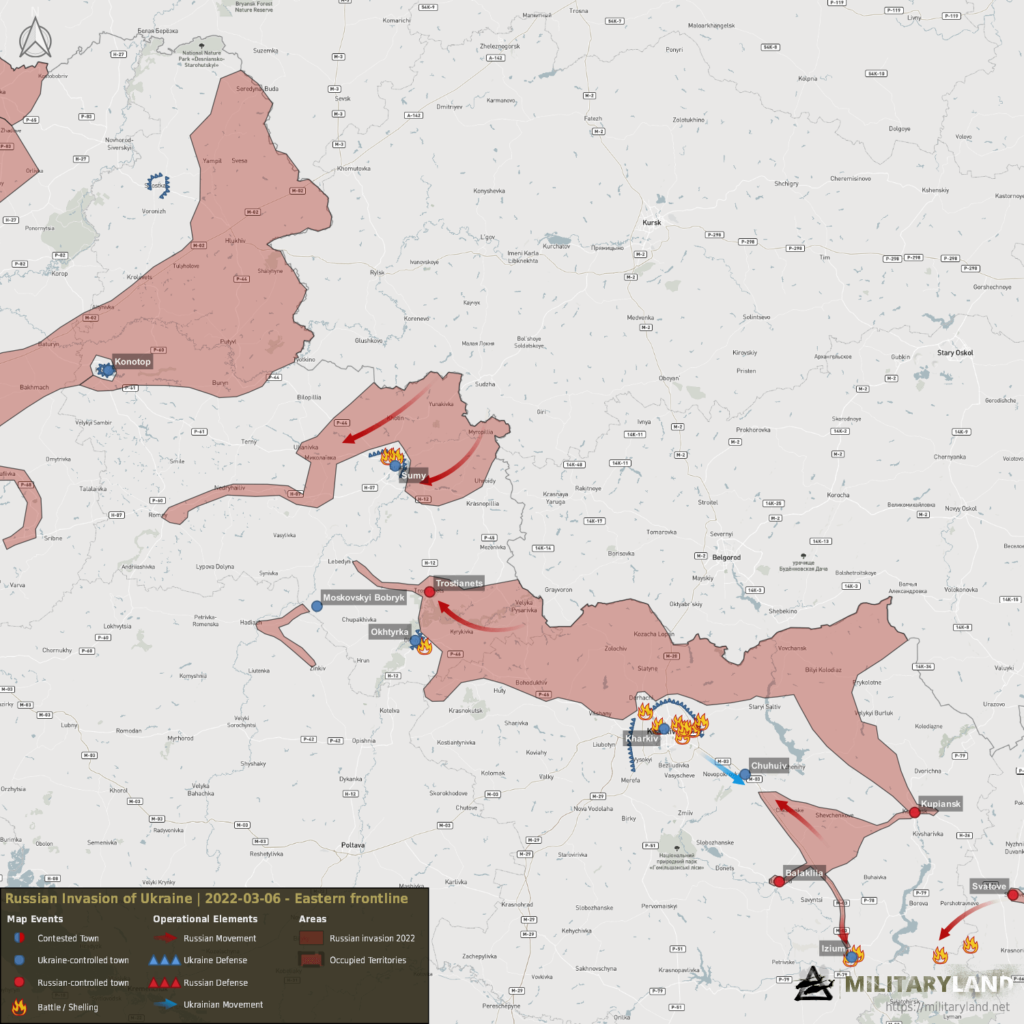 Sumy remains in Ukrainian hands, there has been no change today.

Russian forces continue to shell the outskirts and the city itself. Ukrainian troops await a new ground offensive in upcoming days. We still have no data on the counter-offensive east of Kharkiv. It either didn’t happen or the results are being kept in secret.

Ukrainian forces reported they liberated the town of Chuhuiv (there was no report of being it captured). That means Russian forces have a much larger presence in the area than we originally knew. 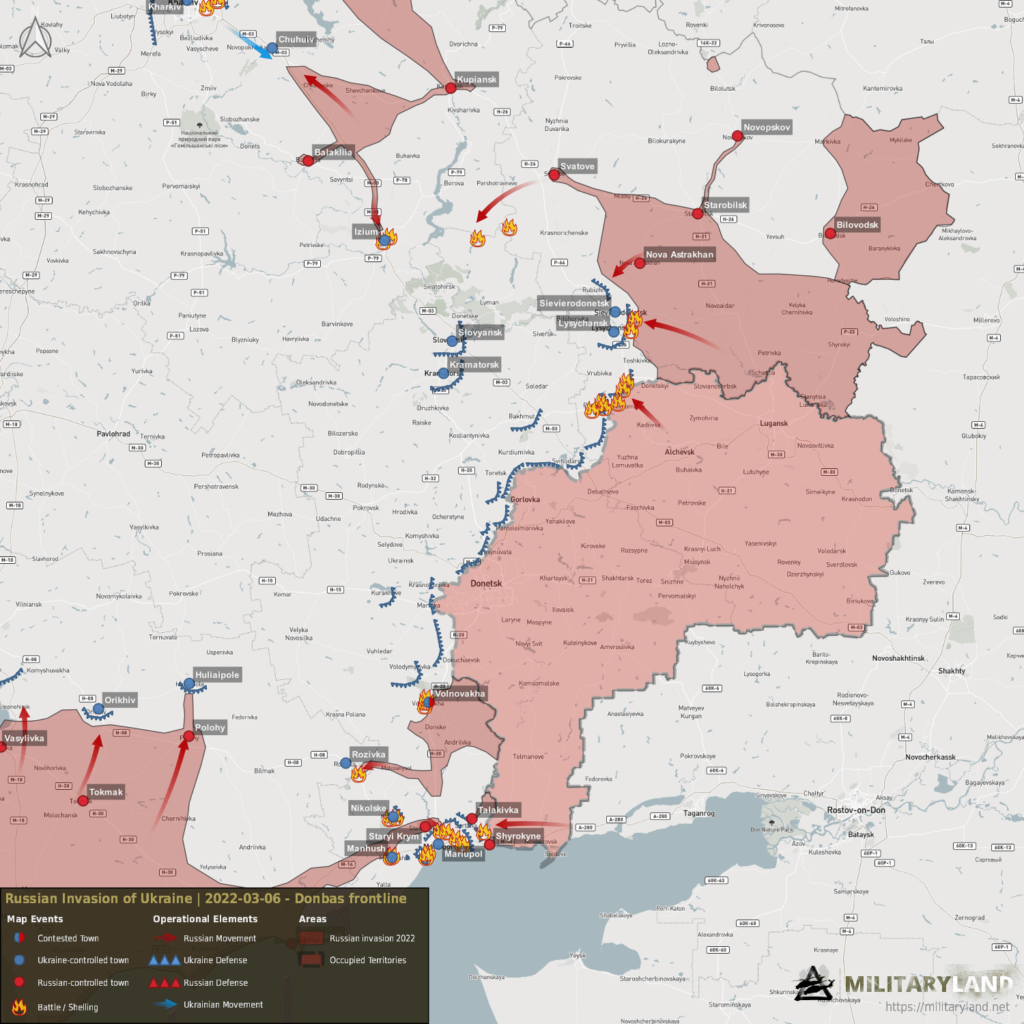 Heavy fighting was reported around the town of Izium. Ukrainian forces successfully continue to hold the town.

Russian forces tried to break through defense lines near Sievierodnetsk, but the attack was repelled by Ukrainian defenders. Ukrainian 24th Mechanized Brigade continues to hold positions near Popasna and Zolote despite enemy’s superiority.

Another Ukrainian convoy was ambushed between Nikolske and Rozivka. Russian forces now definitely control the road H-08 between these two towns, and that complicates the situation around Mariupol.

Mariupol continues to be besieged, Nikolske is now besieged as well and Rozivka is about to be as Russian forces captured Polohy. Ukrainian forces counter-attacked near Mariupol, destroying several Russian vehicles, but no other details have been shared. It seems it was a hit-and-run operation instead of a try to lift the siege of Mariupol.

Ukraine and Russia announced evacuation of civilian population from Mariupol in the morning, again. However, the evacuation was cancelled in the afternoon due to ceasefire regime not being respected by Russian side.

and how to do it from a smartphone?

→ High casualty levels for the Russians. → Open-Source Intelligence (OSINT) from TikTok, Twitter, Telegram, Facebook, etc. have primacy over the mainstream media which is not a reliable source for the ebb and flow of this invasion. → There are three bridges over Irpin River: two close to Irpin and a twin-span railway bridge that connects to Kyiv. The Irpin River is the defensive front-line of Ukraine for Kyiv. By blowing up the bridge, Ukraine… Read more »

You should add a way to close the window when one clicks on an image. As it is now, you have to refresh the page, which is a bit annoying. Otherwise, thanks for the great coverage!

You should be able to close the image by clicking on it again or pressing ESC.

Is there still a significant worry that Belarus may invade south from Brest? Or was this merely a false rumor?

Also, something I haven’t figured out. Where does Moldova stand in relation to the Ukrainian situation?

Hey Luke, re: Moldova, have look online about Transnistria – it is essentially the Donbass of Moldova. Also have a look at the photo taken of Lukashenko briefing the @[email protected] military operation – looks like RUS forces land at Odessa and push forces to that region of Moldova (bottom left of chart).
https://twitter.com/Den_2042/status/1498674777032114184

I lived in Moldova for a few years on a humanitarian mission and can add my limited understanding. As noted above, there is a small portion on the eastern side of Moldova (southwest Ukrainian border) that essentially does its own thing and is known as Transnistria. I was told this area housed a portion of the former soviet union army back in the 90’s and the soldiers laid down roots and raised families in the… Read more »

Thank you both. I had no idea this was the context of the country. I’m curious to look more into the history of the region now when I am able. I greatly appreciate this, it clears up many if my questions, although it poses new worries. It hadn’t occurred to me before that many of the eastern nations in Europe have certain pro-Russian factions. I’m glad to know this now, and with future conversations, I… Read more »

Thank you for the inclusion of your resources. These are invaluable. I know I have said it again and again, but the quality and clarity of this work compared to professional media is incredible if sobering. It seems like the Russians are consolidating themselves across the lines. And with it, a relief operation for Mariupol seems increasingly unlikely. But maybe I’m wrong. You know, in writing these post, I know I have little to add.… Read more »

This is such a powerful sentiment, thanks Luke.

This delights my soul! Thank you humbly, Nathan.