The 100th day of the Russian three-day invasion have passed, and the enemy hasn’t achieved any of its goals yet. Ukraine has still operational air force (in limited form), controls portion of Luhansk and Donetsk Oblasts and repelled major assaults on Kyiv, Chernihiv, Sumy, Kharkiv and Mykolaiv. Russian army captured one iconic city – Mariupol, one regional capital – Kherson and one nuclear power plant – Enerhodar.

Ukrainian troops continue to fight in Sievierodonetsk and despite the lack of heavy artillery and air superiority in the area, they’re holding out.

Russian army continues to target border areas of Ukrainian Chernihiv and Sumy Oblasts, looking for a weak spot in the Ukrainian defense. 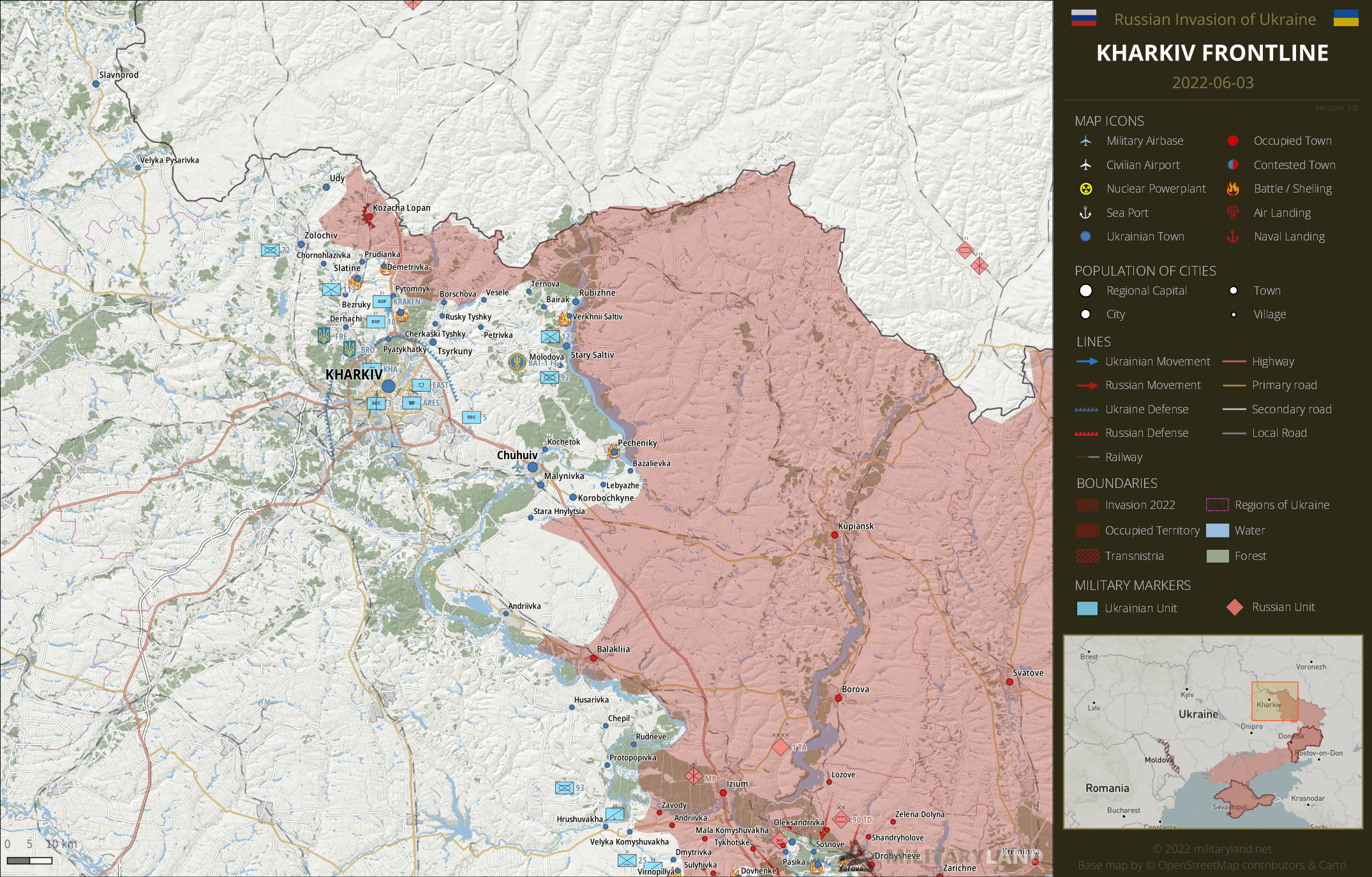 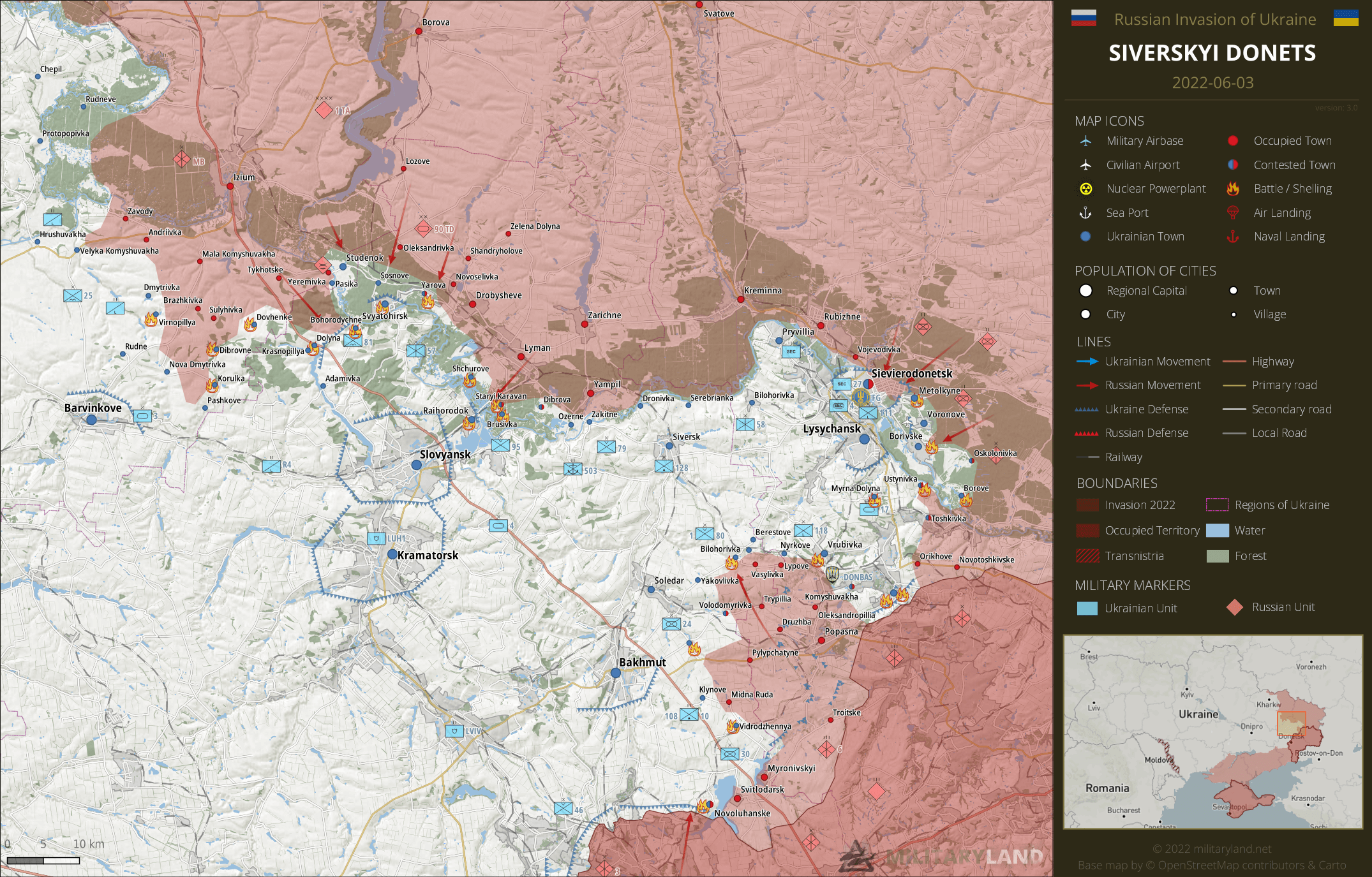 Correction: Ukrainian staff reported shelling of Ukrainian positions at Borove, meaning the settlement is under their control. Given the terrain and swamps in the area, Oskolonivka might or might not still be in Ukrainian hands as well. I marked it as contested for now, until we get a confirmation from either side. 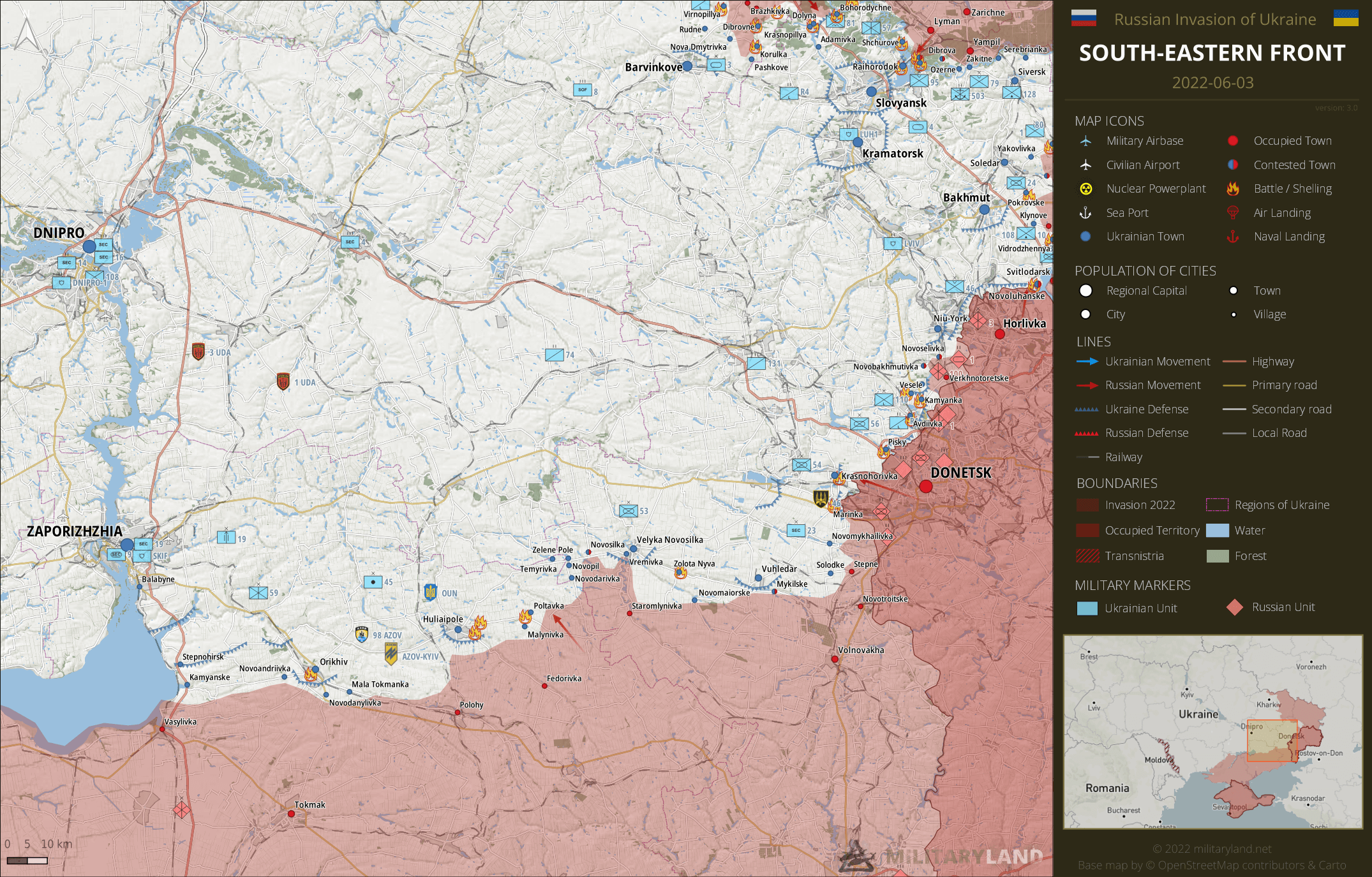 Correction: The state of Novosilka is unclear. Neither side reported anything for at least a few weeks. I marked it as contested for now. 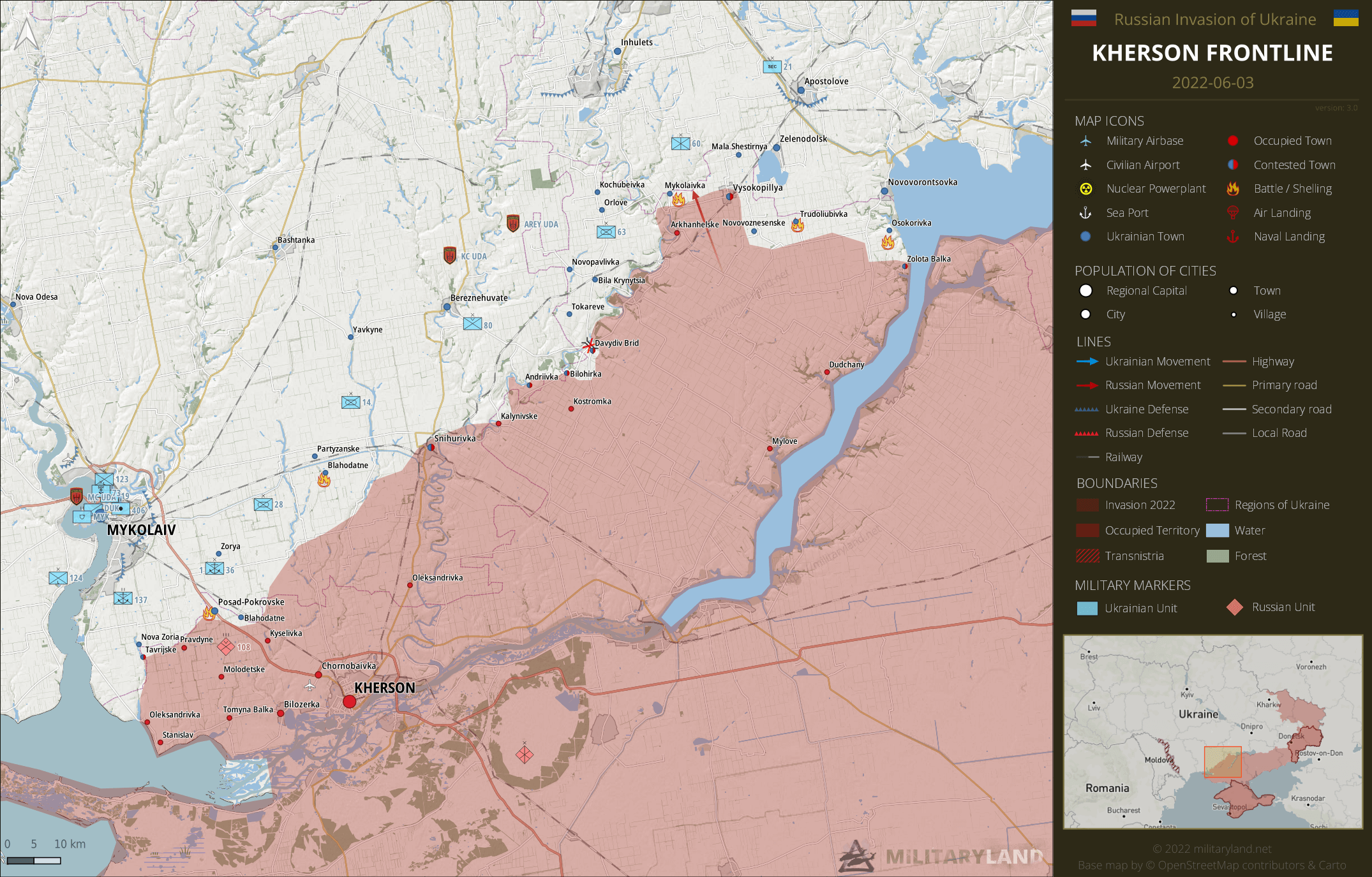 The situation at Davydi Brid is covered by the fog of war. Ukrainian forces have indeed crossed the Inhulets river using a pontoon bridge near Andriivka, but how far they advanced is unknown, even Ukrainian media cannot agree here. I decided to mark all three cities in the area as contested, and hopefully we’ll learn more in coming hours/days. 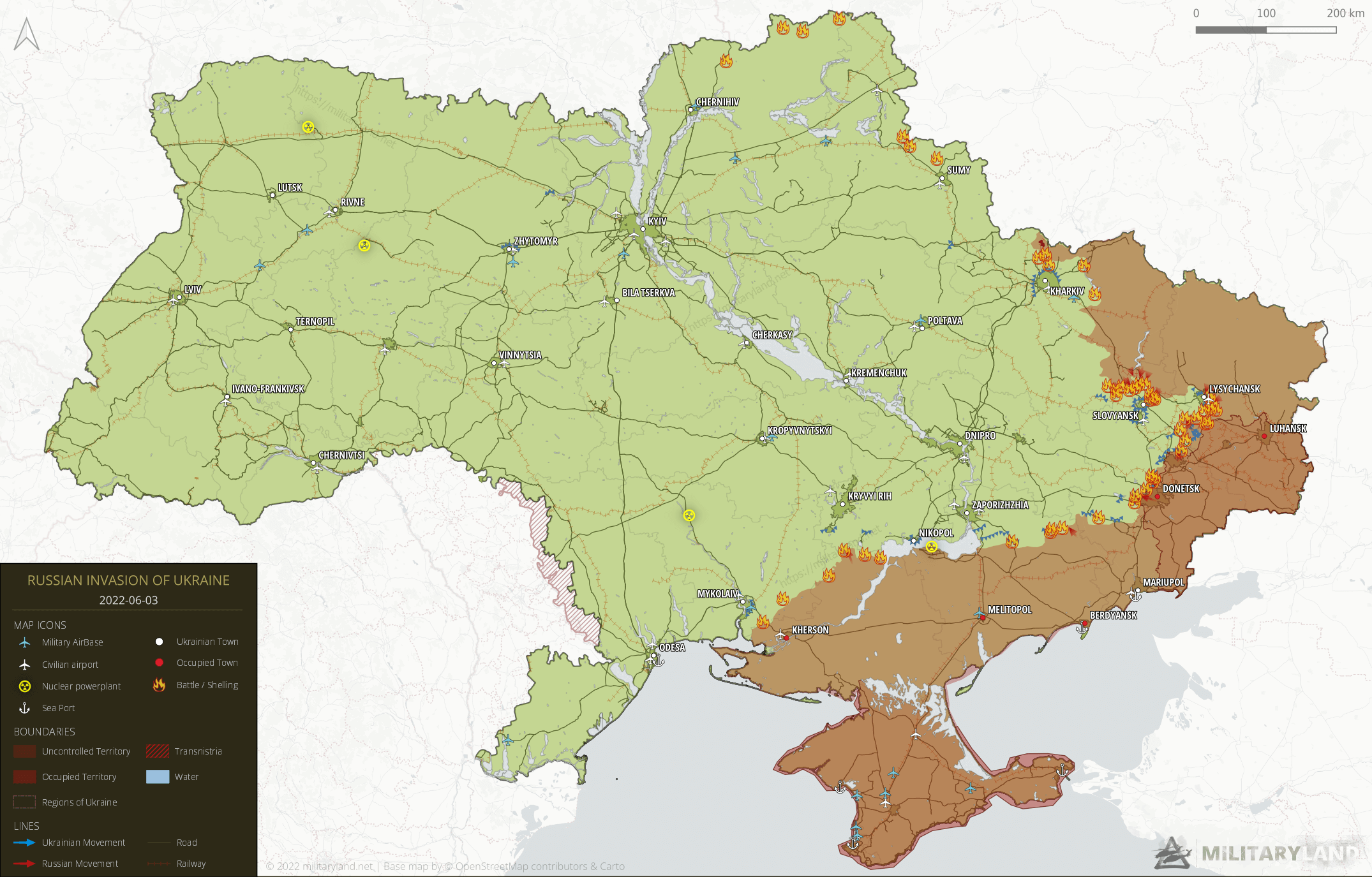 For the second or third time within a few days, the Charkiv Region administration has included victims from Balaklia in their daily report on the consequences of Russian shelling. The first time I thought they might refer to Balaklia Rayon, more of half of which is under Ukrainian control. But today’s reference is clearly to the town itself. Regular Russian shelling of a town usually means that it is at least partly under Ukrainian control.… Read more »

Addendums: a.) N.G.Ruser, in his latest map update, sees Ukrainian control towards the immediate city limit of Balaklia. I.e., he has marked Pryshib, E of Balaklia, as Ukrainian controlled, and places Werbiwka into “no man’s land”. Acc. to him, Khotomlya and Zarikhne are Ukrainian-controlled, with some “no man’s lands” around. Nathan Ruser on Twitter: “Putin’s War — The Ukraine Briefing for June 5th. – Some Ukrainian gains in a counterattack on Sievierodonestk. – Ukraine withdrew… Read more »

Thank you for your 100 days of summary!

Sievierodonetsk remains uncaptured today.  I thought it was impossible to hold a large Russian army with two poorly trained infantry brigades.  But things don’t always turn out as planned.

It seemed that infantry troops, with good tactics and weapons, could still delay and even defeat armored attacks.

Take away Russia’s advantage in volume of artillery, get in close with their infantry, and it gets bad for Russia.

Ukraine knew what they were doing by staying in Sievierodonetsk and taking this fight. They did the most damage previously on Russian forces when they had them in close for unit to unit fighting in the towns outside Kyiv. Here was an opportunity. They sit on the high ground across the river in Lysyschansk, almost certainly with 155mm howitzers trained down on those streets. They knew Putin would pay too high of a price for… Read more »

Again, you use Ukranian Telegram channels as a source of “truthful information”. Whether you like Ukraine or not, you can not use Telegram chanells run by Ukranian Ministry of Defence and treat it as factual. The same goes on to say about Russian telegram channels. Much of your sources are limited in evidence, and with constantly stating about “unsuccessfull” Russian attacks you are not actually helping the situation but rather misinforming your viewers. I am… Read more »

Sorry but if you’re treating information coming from the Russian government in a “Fair and Balanced” manner, you are already choosing to be misinformed. Once someone has lied that much you’re joining in if you pretend they are in any way a legitimate source of information that must be considered against other evidence.

John did not say that the information coming from the Russian government is “fair and balanced”. But it is not right to treat the information of the other side as facts. We also heard from the Ministry of Defense of Ukraine about the “ghost of Kyiv” and the 13 dead heroes of the Snake Island. And it wasn’t true, as it turned out later.

In fact it was Ukrainian officials who shot down the myth of the “Ghost of Kyiv.” “Ukraine Air Force Command has warned on Facebook that the “Ghost of Kyiv is a superhero-legend whose character was created by Ukrainians!”. “We ask the Ukrainian community not to neglect the basic rules of information hygiene,” the message said, urging people to “check the sources of information, before spreading it”. Some information coming out of Ukrainian sources has proven… Read more »

“Ukraine Air Force Command has warned on Facebook…” after a month of inflating this information in local and Western media. And what about the 13 killed heroes of Snake Island? This information was “a little exaggerated”? Anyone can consider any source as propaganda or the only truth. But this is definitely not an objective analysis. In this case, you yourself become like those on the other side. You become a participant in the opposite propaganda.… Read more »

I mean sure, note if there is a serious element of doubt about any information given. That’s a fair point. But to claim that the drivel coming out of Russian mouthpieces is somehow evidence against anything else is just wrong. And, I’m curious, what is your source for the information that the inhabitants of Krasnohorivka are saying that Russian troops haven’t attacked? That is some remarkably specific reporting. I’d love more sources for that kind… Read more »

Hey there. Firstly, information given by the Russian side or Ukranian side should both be treated with ‘a grain of salt’, you stating that the information coming out of “Russian mouthpieces” is somehow not evidence also is just blatantly ignorant, as regardless of your personal opinions both side provide information which must be taken in and accounted for, not ignored like what you seem to want to do. Secondly, regarding the Krasnohorivka claim, I am… Read more »

Yeah, that’s what I thought.

You are arguing that the author doesn’t have enough evidence and then you claim he is wrong. Where is your evidence?

ruZZians are probing, and finding that they shall not pass. It is remarkable how their ambitions keep on shrinking. Now it seems they are capable of offensive operation on a front of no more than a couple tens of kilometers. I read on ruZZian media four days ago about how Sievierodonetsk fell and they control it no problem. In my opinion what Ukraine army posts is close to factual. What ruZZian sources claim is a… Read more »

Hello, Summaries are based on the reports by Ukrainian General Staff and local regional city/military administrations. I also use Russian reports to do fact checks, together with the released footage. Poltavka/Krasnohorivka – General Staff report 6:00 May 3 …the enemy tried to engage in clashes and carry out assault operations near Krasnohorivka and Poltavka… I said it here many times, if you or anybody else has different information, found anything incorrect etc., feel free to… Read more »

Thank you Jerome for responding, I will absolutely link any information I do find and send it to you if it could contradict or support anything stated here, thanks for the response. Keep up the good work 🙂

You did contradict what was stated here. So what is the source?

“there was no attack on Krasnohorivka and from what I have found not even the inhabitants can confirm of this, no actual evidence to back this information up at all.”

I have stated it in one of the replies above. Please read before accusing me.

Do you mean this?

” I have sweeped through many online installations such as these telegram channels, the internet itself, Pro-Russian and Pro-Ukranian sources and I have not found a single bit of evidence to say that an attack there has taken place, in fact, Donetsk oblast has not seen many battles in the past days, unlike the Lugansk Oblast.”

You realize, the source you’re giving is, “I read it somewhere.”

Whether you don’t find evidence about any information to confirm it doesn’t mean that info is not true. Yes, maybe it is not true, why not, but maybe you didn’t find it because you didn’t look for it in the right place or just because it is not possible to get the info (I suppose nobody in this site has a Palantir at home…). I would simply be left with a general idea of the… Read more »

Yes Jaime you are right, I do not have a palantir myself but would really like to get one 🙂 It is also why I put the ending on my initial statement about this map which stated : “Again, I like this page and thank you for informing people of the situation, but please if you have no direct proof or evidence of certain information, especially that which you find on Telegram, do not treat… Read more »

It is a good point, John, regarding using qualitative adjectives regarding movements; “reported” is my preferred. One mechanism for determining the veracity of sources is looking at more widely agreed positions several days after a territorial position change is stated. This is one of the reasons Ukrainian military sources are used more often; they more readily confirm negative news that is subsequently confirmed. I rather suspect this is deliberate, as it is makes them a… Read more »

The only sensible thing to do is completely ignore states which have no free press reporting and disseminate information purely for political ends. Their word on anything means zero. In many cases the information will even have a negative value (you know less by hearing it, by design). That is not, however, synonymous with completely believing the reporting of the other side. Information from any group has to be interpreted with incentives in mind, but… Read more »

Bingo. That’s exactly the problem with being Fair and Balanced with a source that is crooked by definition. A dictatorship is crooked by definition and I’m disturbed that so many people supposedly living in the free world are having such a difficult time understanding this. Not exaggerating. I’m not annoyed. It’s genuinely frightening. The Fair and Balanced trick is undermining democracy itself.