The summary of the tenth day of Russian invasion to Ukraine, 5th of March 2022.

The situation on the ground is tense, but stable. Russian forces didn’t gain much new ground and lost several jets and helicopters. Ukrainian forces are holding the defense lines firmly. 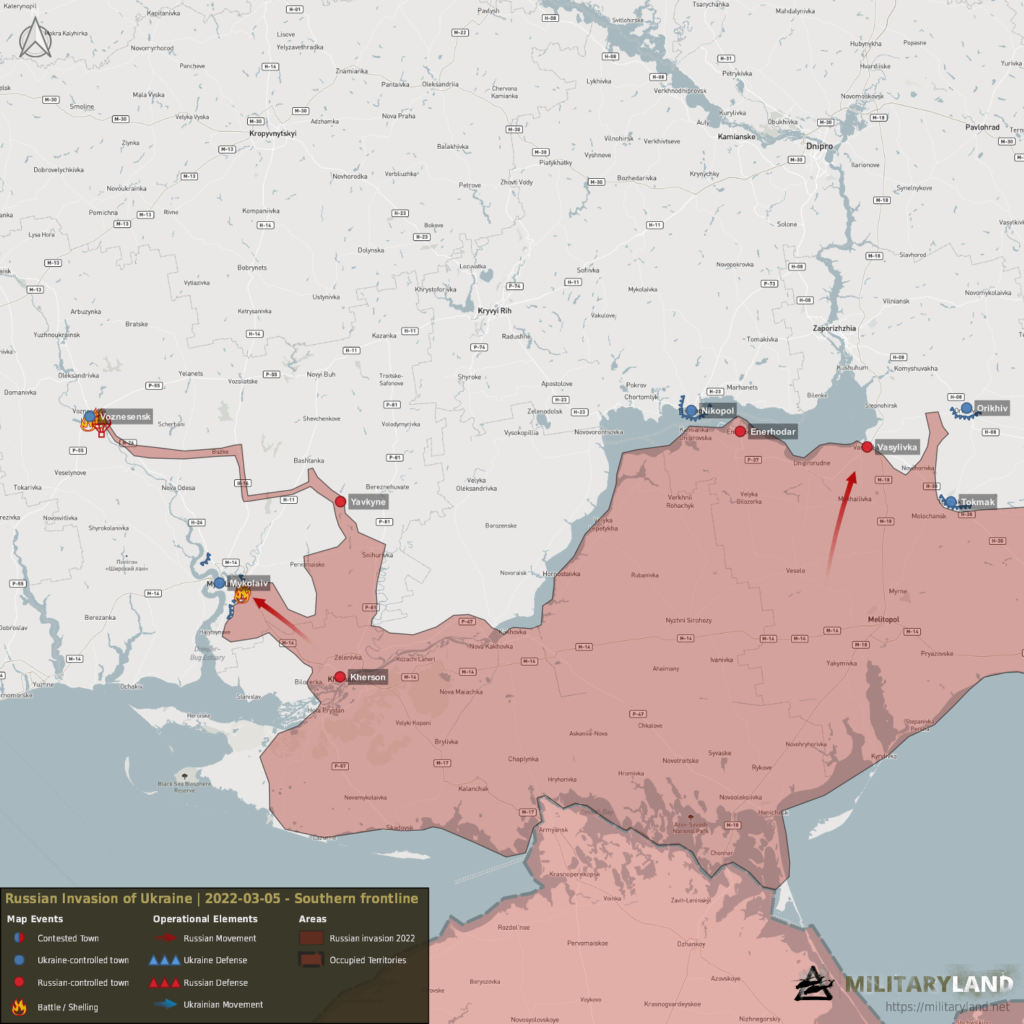 Russian troops landed near Voznesensk and attacked the town. After fierce fighting, Ukrainian troops maintain the control over the town. A reconnaissance element attacked a Ukrainian checkpoint near Mykolaiv, but the assault was repelled.

Russian forces pushed towards Orikhiv, bypassing Tokmak. Ukrainian Army suspected they might launch the attack on Orikhiv today, but nothing happened. There is a reasonable suspision they are pushing towards Zaporizhzhia instead.

Note: We have visual confirmation that Tokmak was under Ukrainian control on March 3. There is no information on current situation, but neither side reported the gain/lose of Tokmak since then. 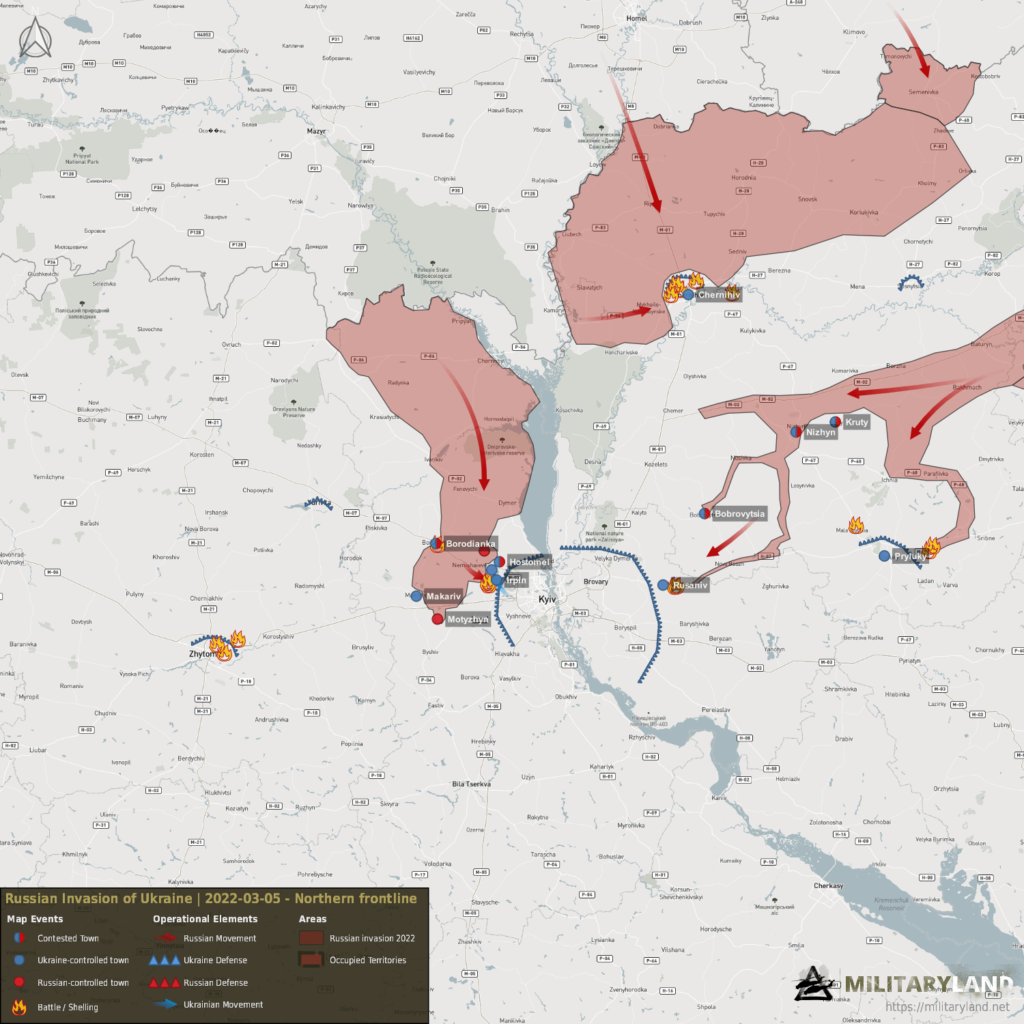 Russian forces attacked Irpin from the western flank and entered the town. Latest reports suggest this flanking maneuver was successfully pushed back.

Ukrainian forces reported a destruction of Russian convoy near Rusaniv again. There is probably a much larger Russian element in the area than we thought. 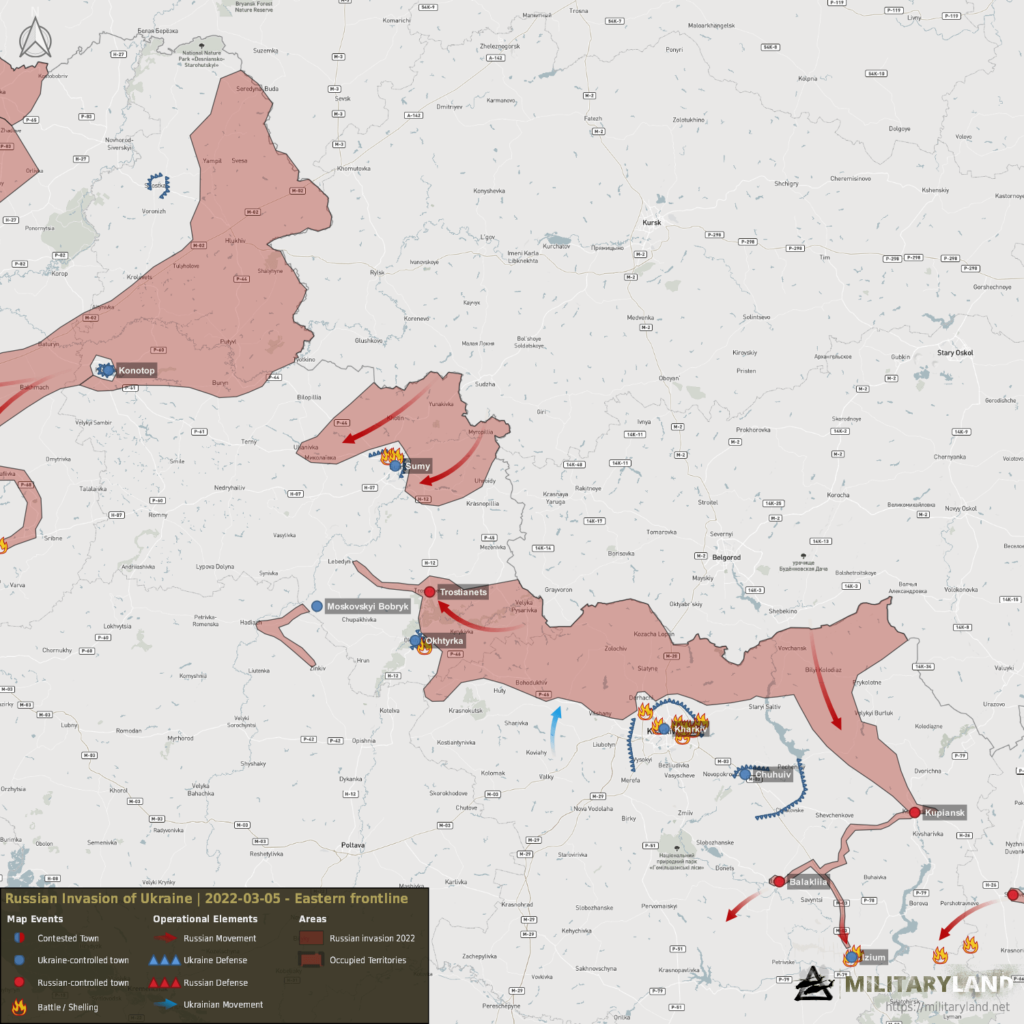 Russian forces established a base in Trostianets. The city of Sumy continues to be under heavy shelling, but Ukrainian forces are holding.

We’re still waiting on the result of the Ukrainian offensive east of Kharkiv. Meanwhile, Russian forces pushed south of Balakliia, but were ambushed by Ukrainian 25th Airmobile Brigade. 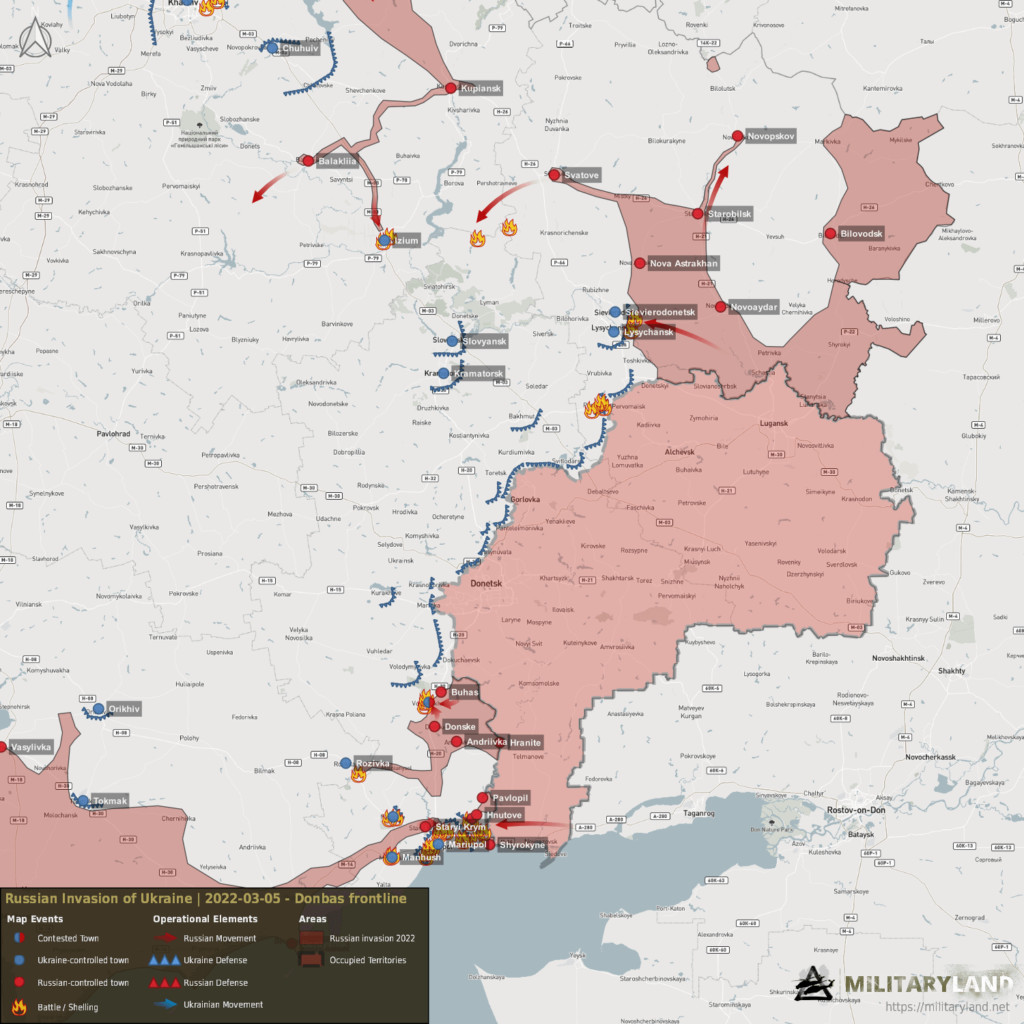 There’s been no changes reported from this area today.

Ukrainian SBU announced that Russian troops entered the town of Bilovodsk today. There was no resistance as the town was abandoned by Ukrainian troops. We are still waiting on confirmation of the rest of the towns in the area.

Russian troops reached Kalchynivka and ambushed a Ukrainian convoy heading from Nikolske to Rozivka. As a result of the ambush, at least ten Ukrainian soldiers were killed.

Ukrainian forces still control a small portion of Volnovakha. They managed to kill the commander of Sparta Battalion, the infamously known battalion of DPR.

Both sides agreed on a temporary ceasefire and humanitarian corridor from Mariupol and Volnovakha, but the evacuation didn’t happen. Ukrainian forces and Red Cross accused Russian forces of breaking the agreed ceasefire. The fight goes on. 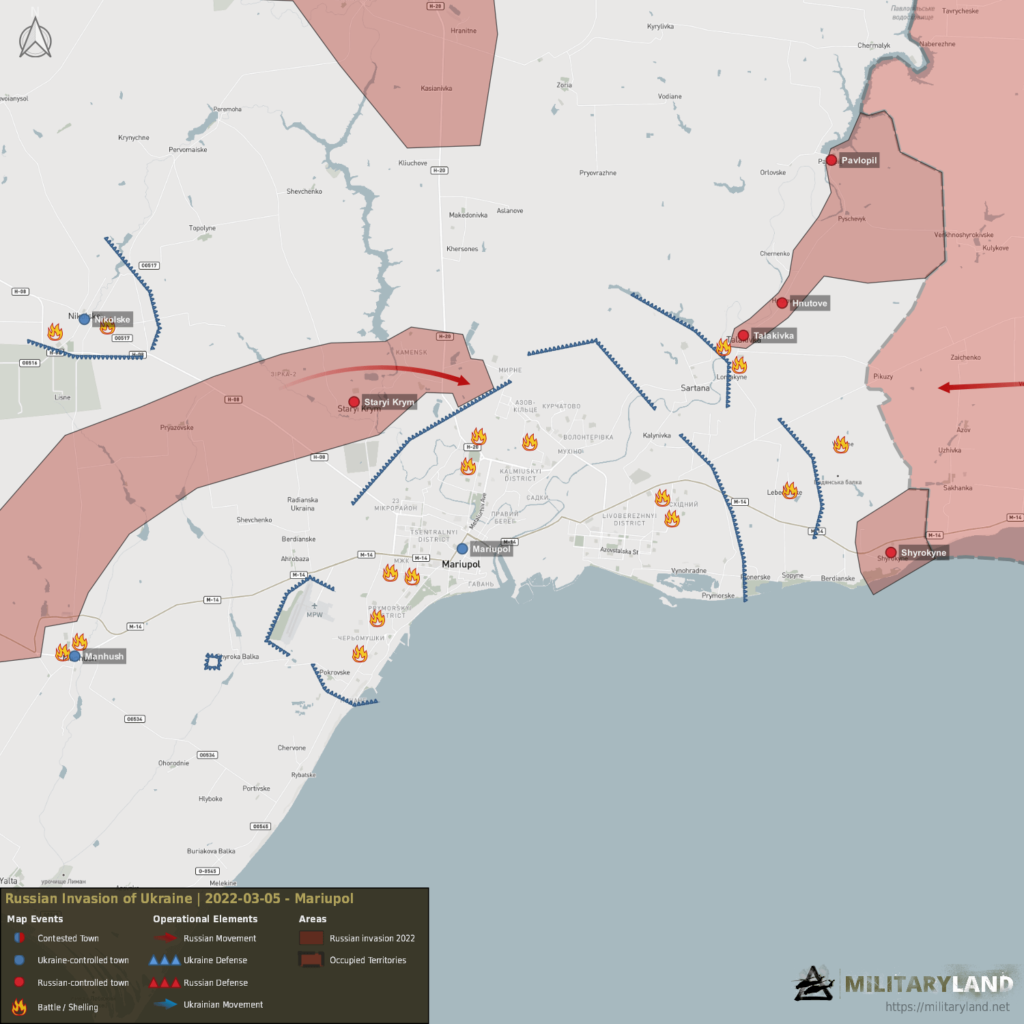 No offence, but from time to time i get the feeling the posted summaries are biased towards Ukraine. The Russian army referred to as ‘the enemy’ and very low numbers of Ukrainian army losses. The Mariupol situation is not as you say. Russia has provided the safe corridor and buses, however Ukrainian forces in Mariupol many of which are from the notorious Azov battalion are not letting citizens leave and are using them as human… Read more »

It is not certified that Azov members didn’t let people go. As mayor of Mariupol state it, Russian army started bombardment gathering points from where civilians would go out of Mariupol. That is why the y cancel it. Probably the truth is somewhere in between.

-Russia has been fighting in the Irpin area for over one week and so it has been a blockage for Russia. In response, Irpin is under intense shelling, it is a dense urban area. The railway connection between Irpin and Kyiv has been destroyed so people are having to go to Kyiv for shelter on foot. -The blown bridge at Irpin is still the primary reason the Russians have not met their objective. -Borodyanka 20km… Read more »

Mariupol mayor, Ukrainian government and Red Cross all stated that Russian force broke the ceasefire. We have seen countless times Russian/Pro-Russian forces to break ceasefire in Ukraine since 2014. So that’s nothing new.

I refer to Russian forces as “the enemy” because they are on Ukrainian soil, it’s not their home, nor they are welcomed by Ukrainians.

Thank you for your effort
How can we know about the Russian units deployed in the Battle field?

They can be identified by vehicle markings or found documents, for example.

And another day passes on. But at least one where the Russian advance is halted. What a disturbing world it is sometimes. I have an odd question, but I was wondering if you all had a list of sources you use. I’ve slowly compiled a few sites, forums, and media to understand the war better, but it always feels incomplete or partisan. I guess part of this is the way of the war, we don’t… Read more »

Waiting with baited breath on the results of that Ukrainian counter offensive near Kharkiv… heard nothing but baseless rumors of the Russians being pushed back, but nothing concrete.

Your anxiety is shared here, too. I’m hopeful they have relieved the city. There are times when I can grow tired of bring realistic at the prospects and simply hope for good news. The Ukrainians are professionals though, and with that, some fears slip away.